At 2.30am on Saturday 22 March 2014 we set off on route to Greifswald on Germany’s northern coast to meet our new boat, Interlude I, and start an adventure. First we would spend three nights in Berlin and we were looking forward to a break from all the planning that we had been doing over the last few days, weeks, months and even years.

The flight went without a hitch (well apart from the toolkit we forgot in the hand luggage that has forever put us on the terrorist list!). We dumped our bags at the brutally modern but very swanky Catalonia hotel, Berlin and then headed straight out. We mooched past a few historical sights before stumbling on the Berlin TV tower. 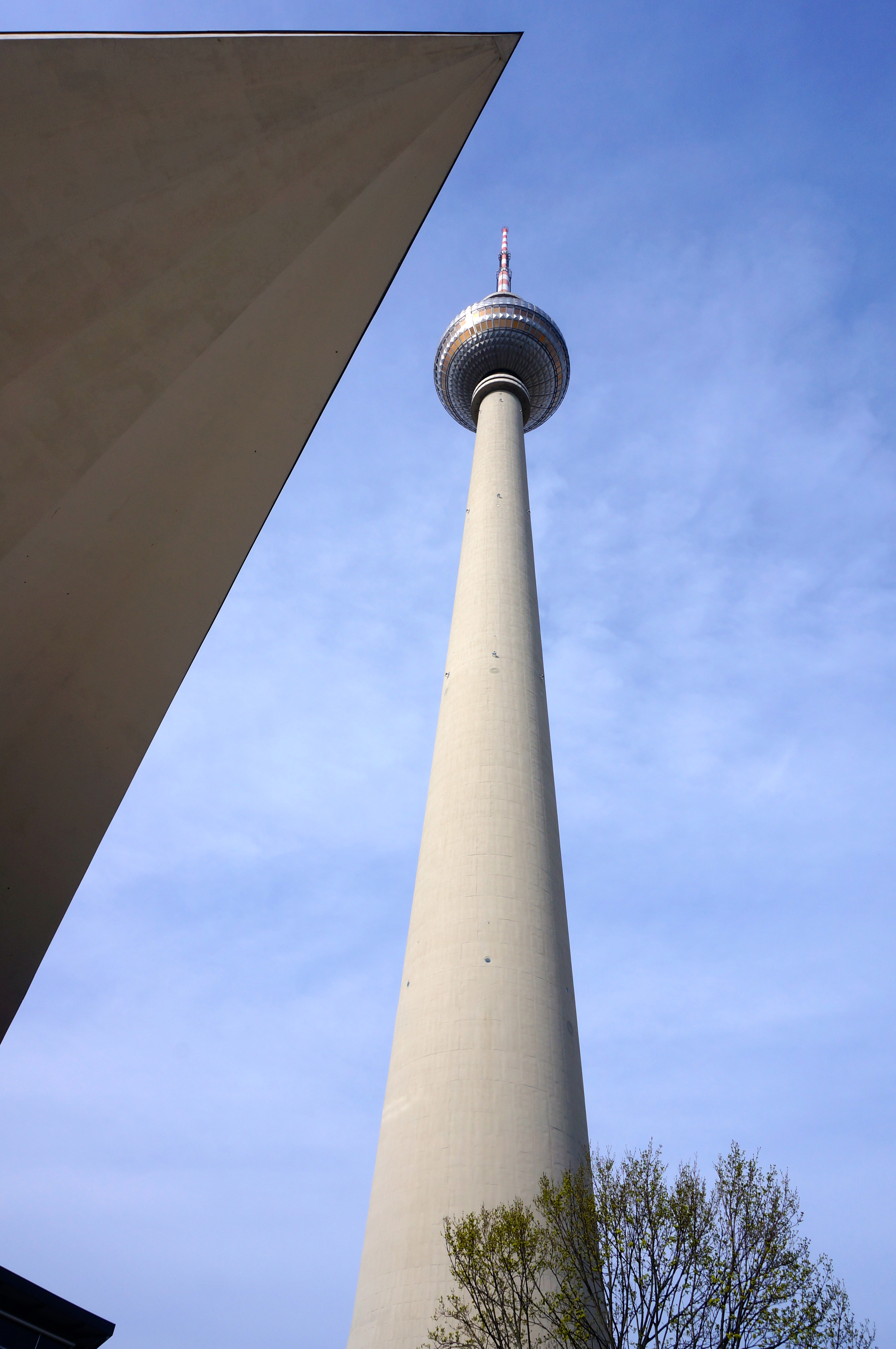 It seemed like a good way to get to know Berlin before exploring it more, so we bought a ticket and opted for the cheaper ‘small wait’ option. The small wait ended up being a huuuuuuge wait. We spent the time wandering around the local streets, eating lunch, sunning ourselves in the local beer garden and still it was not our turn. We even tried to upgrade our tickets with no luck. 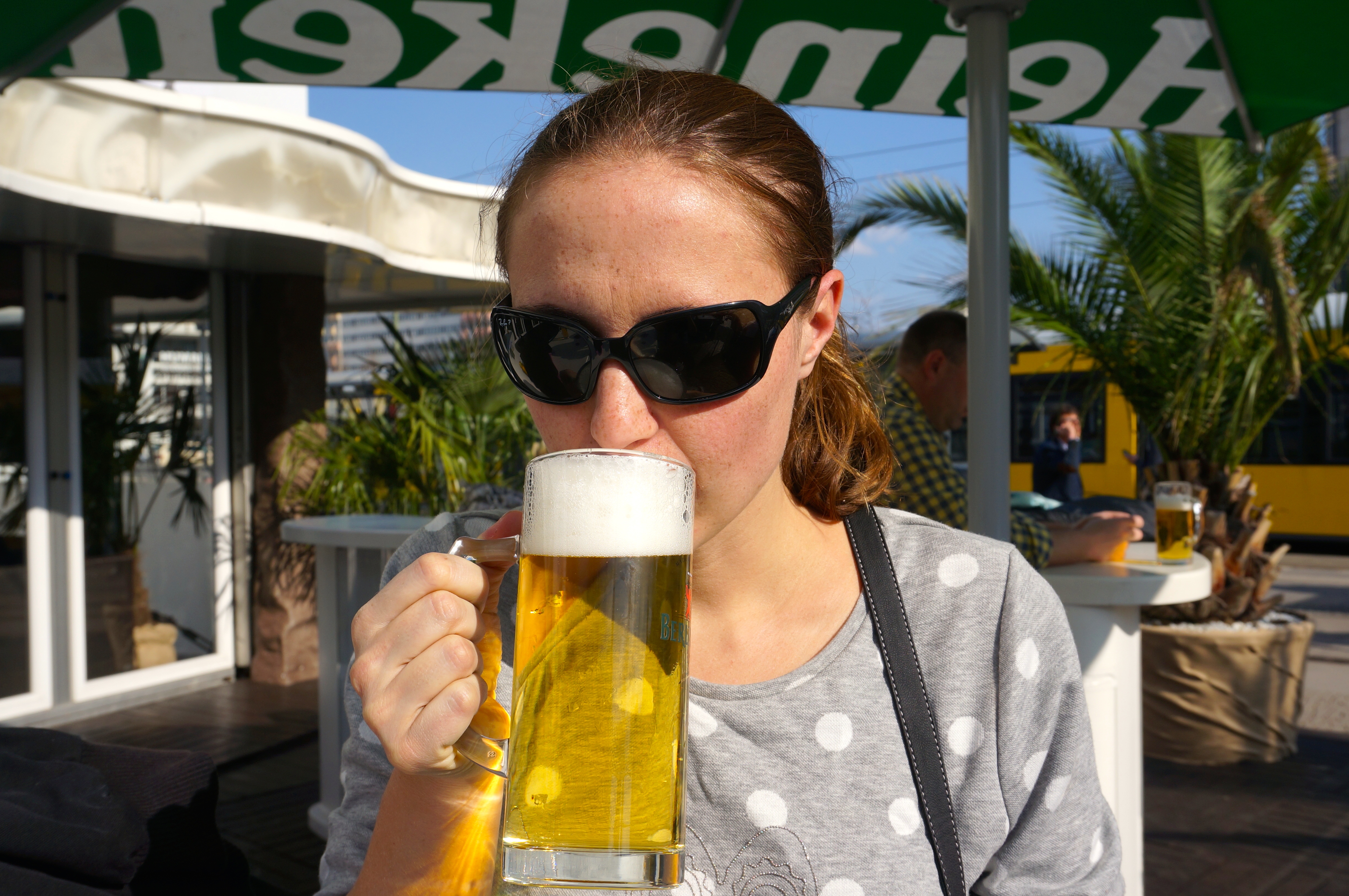 Finally we made it to the top! The view was fantastic and we passed the time peeking through the crowds to spot the famous landmarks and learn a little more about Berlin. There was a crazy mixture of architecture from regal palaces to striking modernity. Sadly, it seemed there were large patches of beautiful houses that had been destroyed and replaced by huge estates of 1970s style high rises – I guess that’s just one of the unfortunate costs on war-torn Berlin.

That evening we headed out to take in some more sights and found a small local restaurant called Zum Nussbaum. The atmosphere was great, the staff were so friendly and we were seated with another couple with whom we shared a few steins. The pork schnitzel with mash was a winner and the Berliner sausage with sauerkraut was awesome too, especially with the mustard! Mind you anything would have tasted great with the amount of Steins we downed.

Day two in Berlin and we were determined to discover more of the city! The day started my way with some yummy treats. 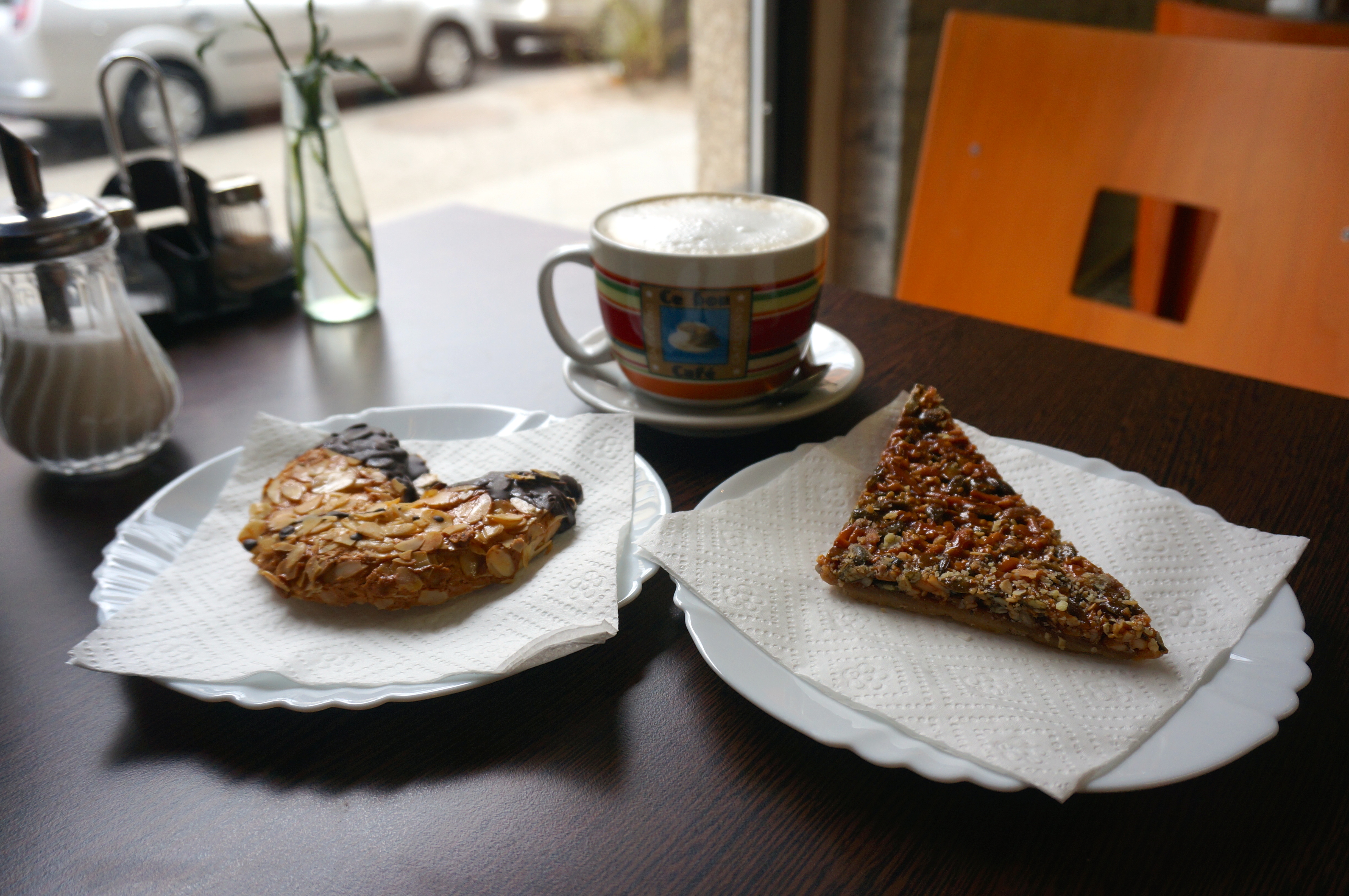 Next up was the Berlin Cathedral. It’s has a special grandeur so we decided to nip inside. The stained glass window let in a divine golden light and the painted ceiling was something spectacular. Just as we noticed the huge organ it began to play and then a Priest started welcoming the locals and visitors to the church. Although his sermon was in German and we had no clue what he was saying, it was captivating. 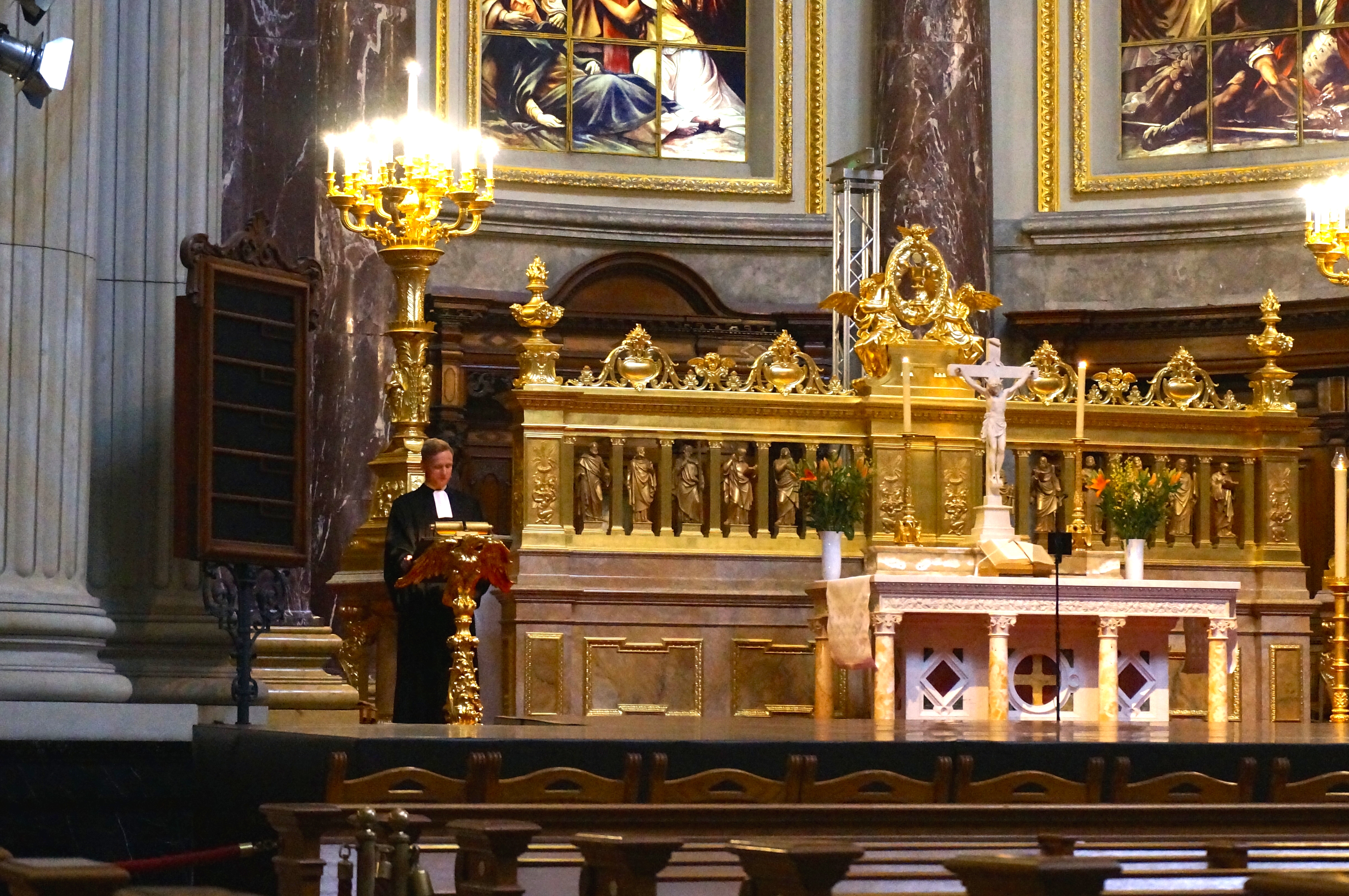 We crossed the square, to the information centre which is a temporary, modern building on the site of the old palace and is currently being rebuilt in it’s former style. The information centre told the fascinating story in full. The Berlin palace was bombed twice during WW2 and a large part of was brought down to rubble. It’s difficult to think that our country and allies were responsible for such a thing. Before leaving we hopped up to the third floor only to find an exhibition on frogs! Very odd but it did help to lighten the mood.

After that we trekked in the rain to Benenburg gate and then onto the Holocaust Memorial – a sight that was also very sobering. Bizarrely from there, you can see the hotel where Michael Jackson dangled his son from the balcony. 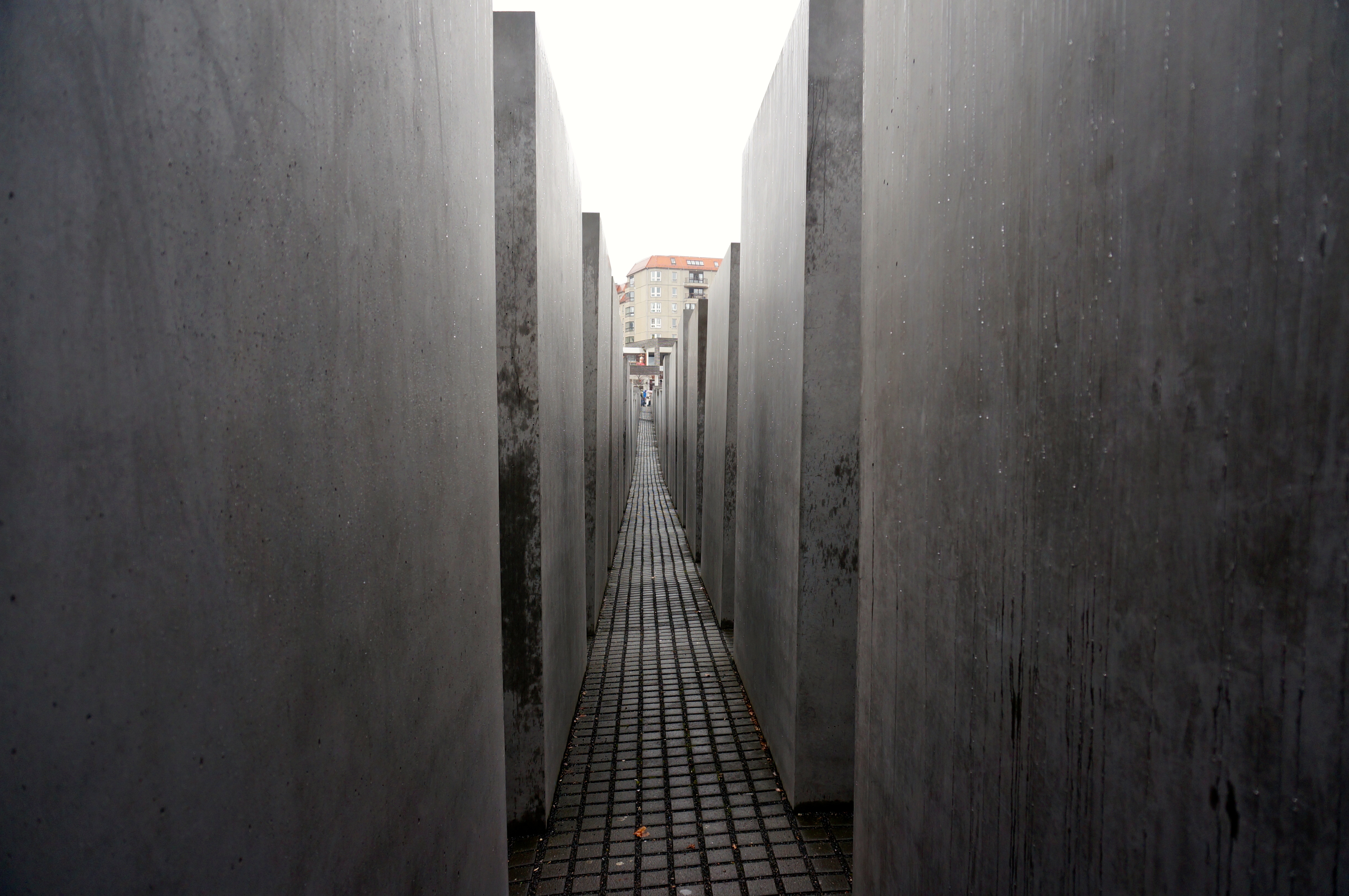 After another long walk in the rain, we were ready for a rest and refreshments. We found a packed bar on the riverfront and got talking to the man seated at the bar. He was a politician, and explained that after the reunification many government officials moved from Bonn to Berlin to work. This pub was the “Bonn embassy” where people came to drink the local Bonn beer. 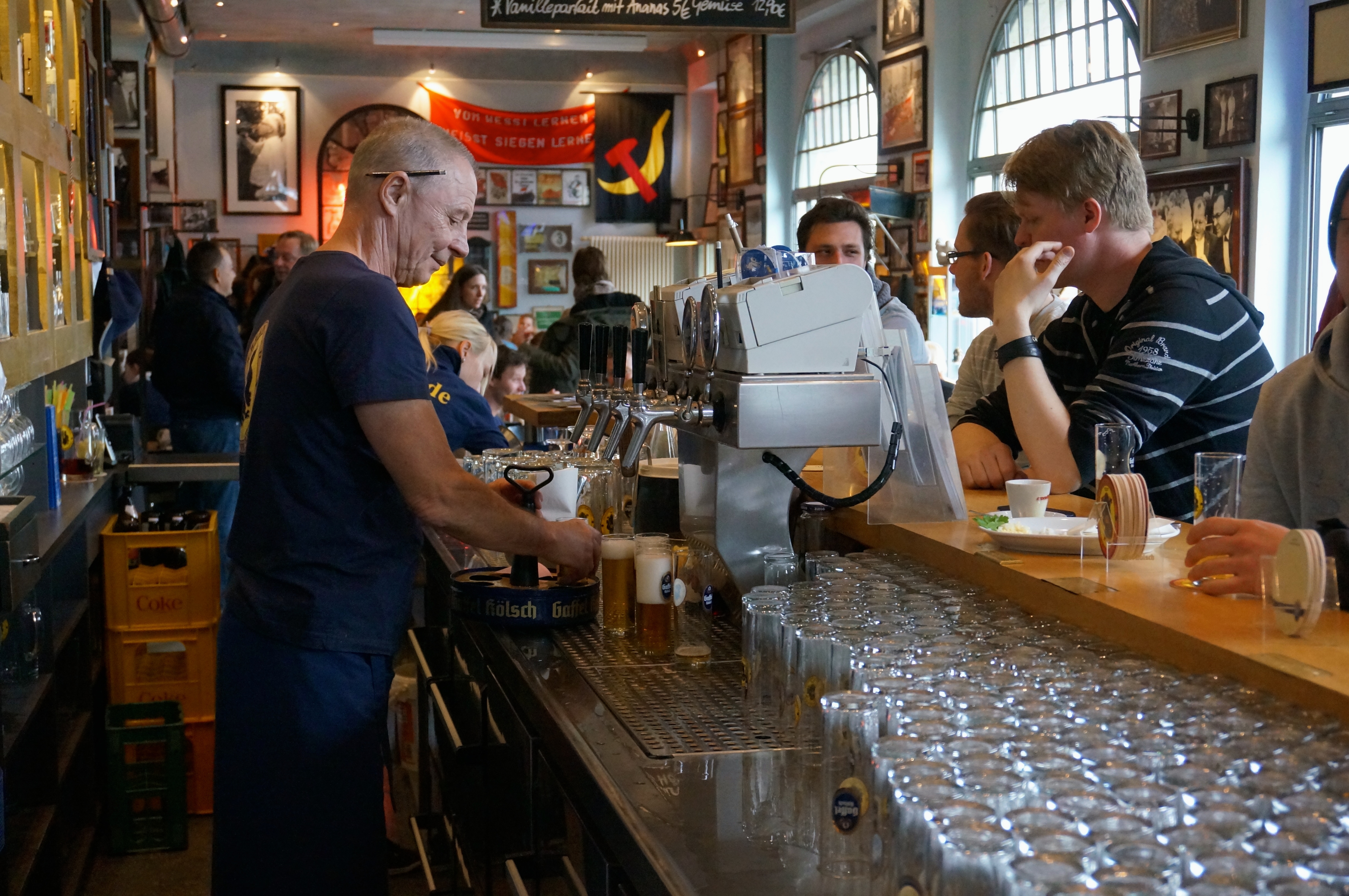 Another long walk took us past Haus Schwarzenberg which contains the Central cinema and Anne Frank museum and then onto Hackescher Markt. Later we caught the train to Weinmeister for dinner.

Today we finally felt like we’d really got stuck into Berlin. On our last day in Berlin and we still had lots of things we wanted to see. We headed for the East Side Gallery, a 1.3km section of the Berlin wall. 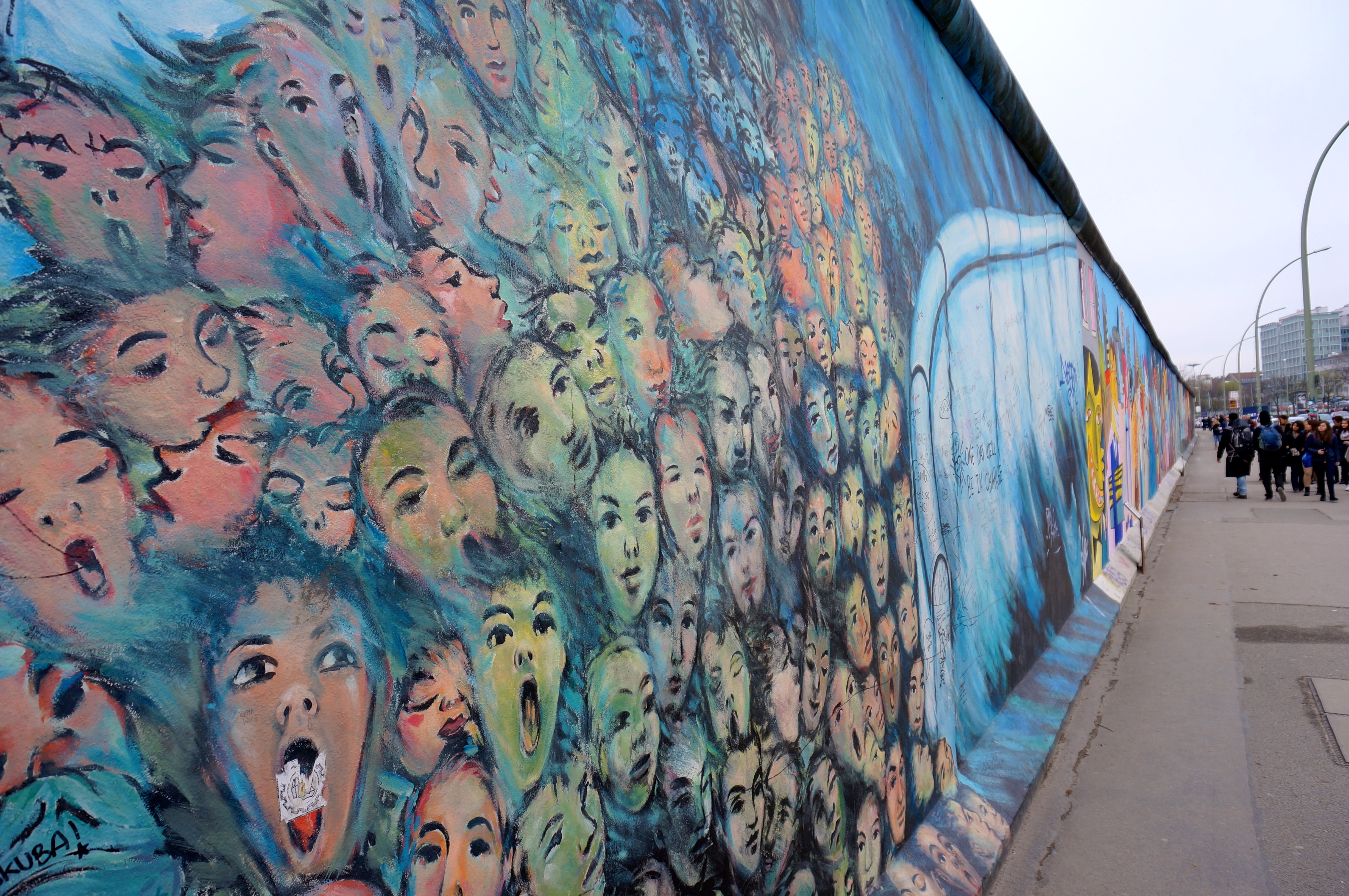 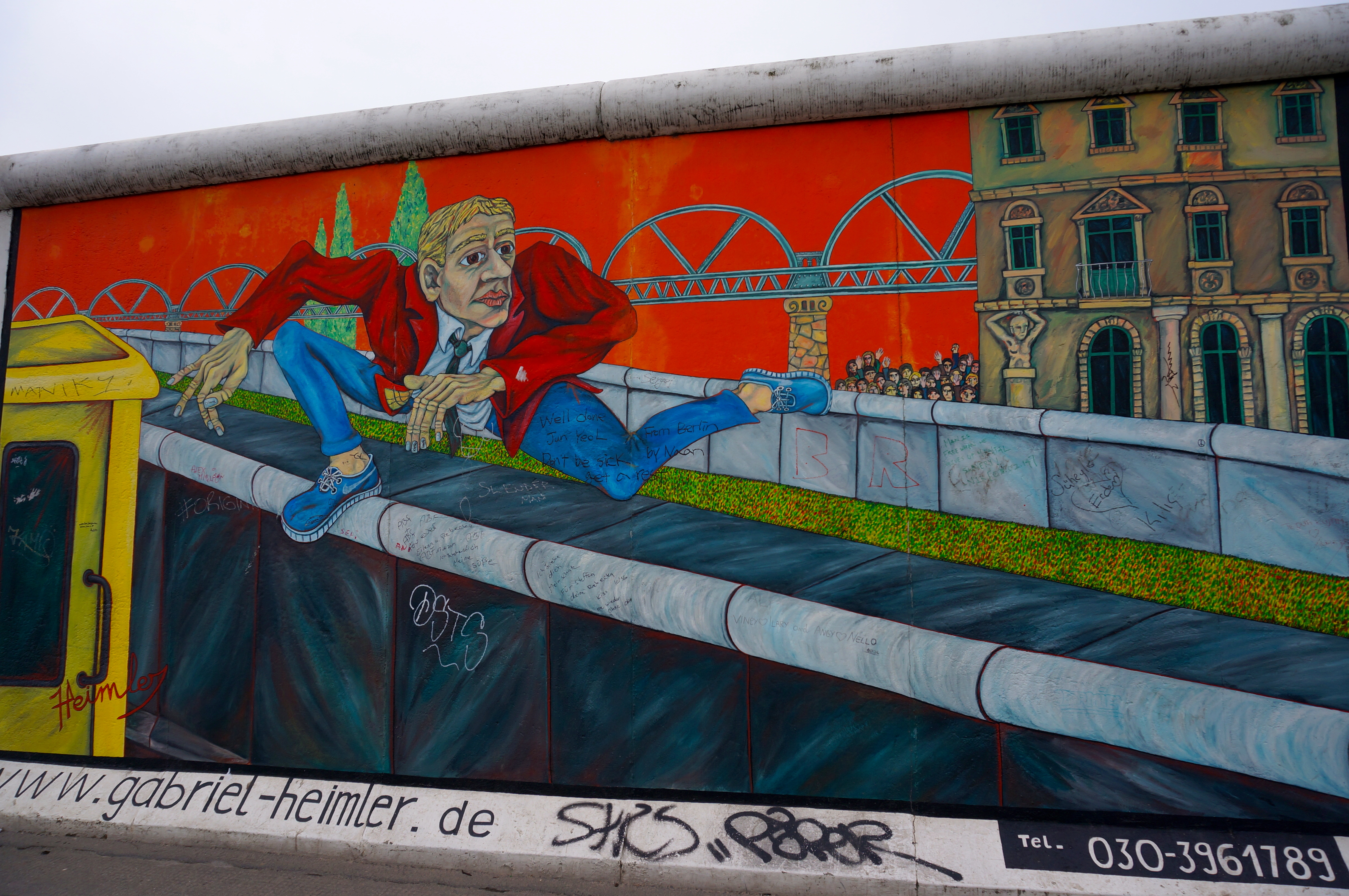 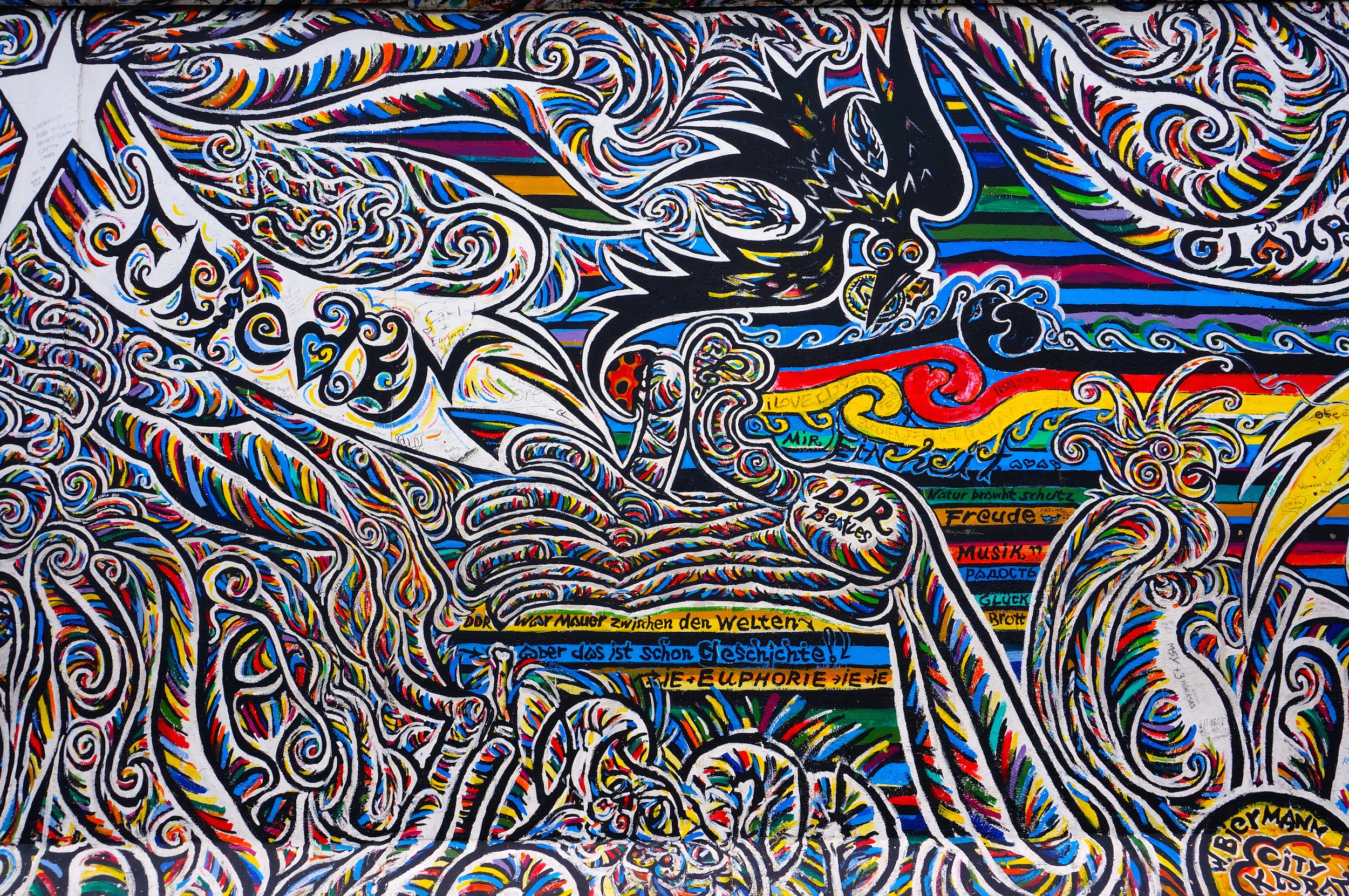 It was not as high as we thought and quite thin too, but I imagine that heavily guarded and covered in barbed wire it would be much more menacing. Today it’s covered in graffiti, the artistic kind as well as a few tags.Even after seeing the wall it’s still hard to imagine this city being torn in two and how life must have been. We walked the length of the memorial before setting forth for Checkpoint Charlie.

On the way we happened on this amazing street food hut selling the best burgers in town. If you’re ever in town you should definitely try one of these. 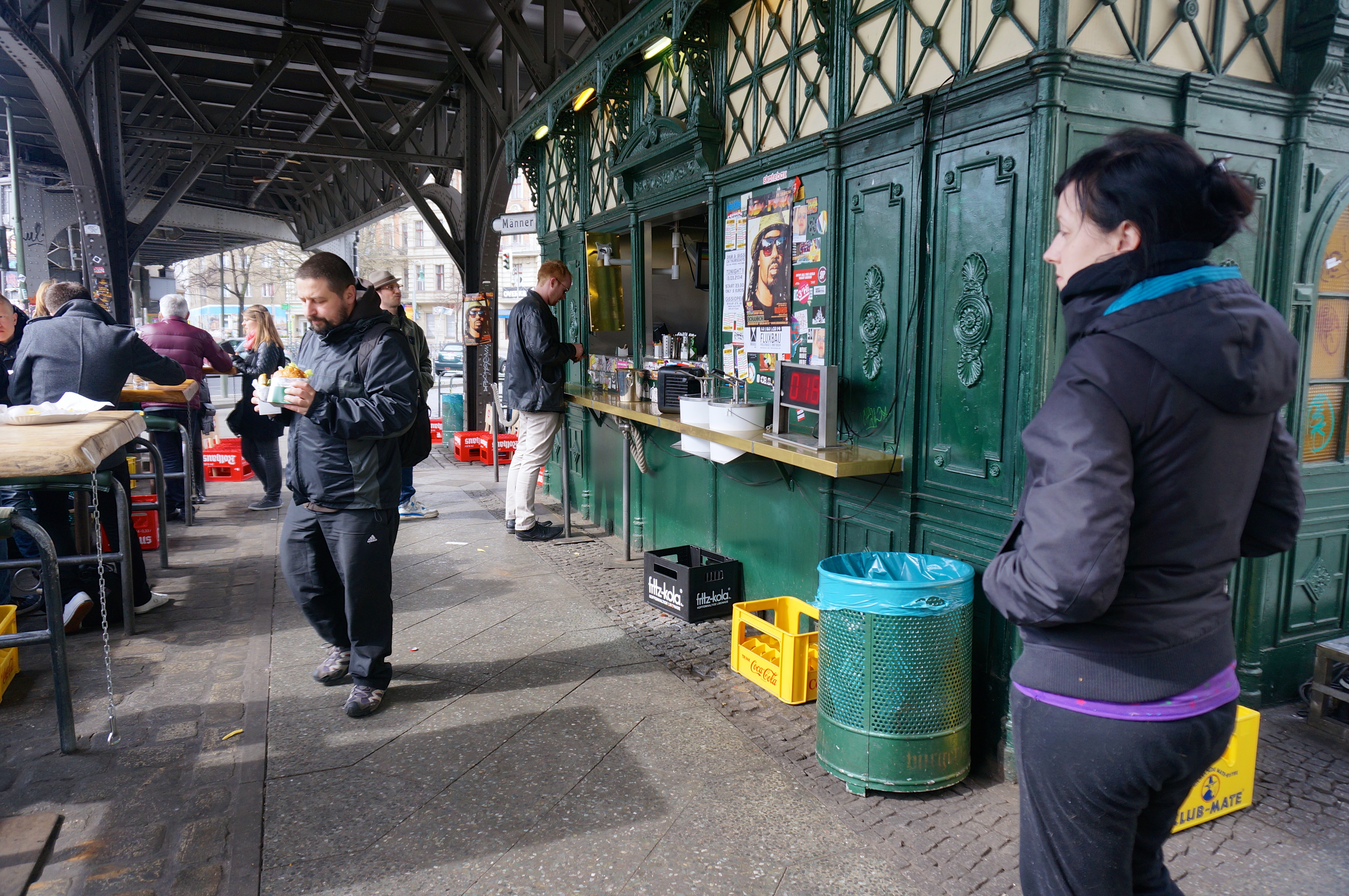 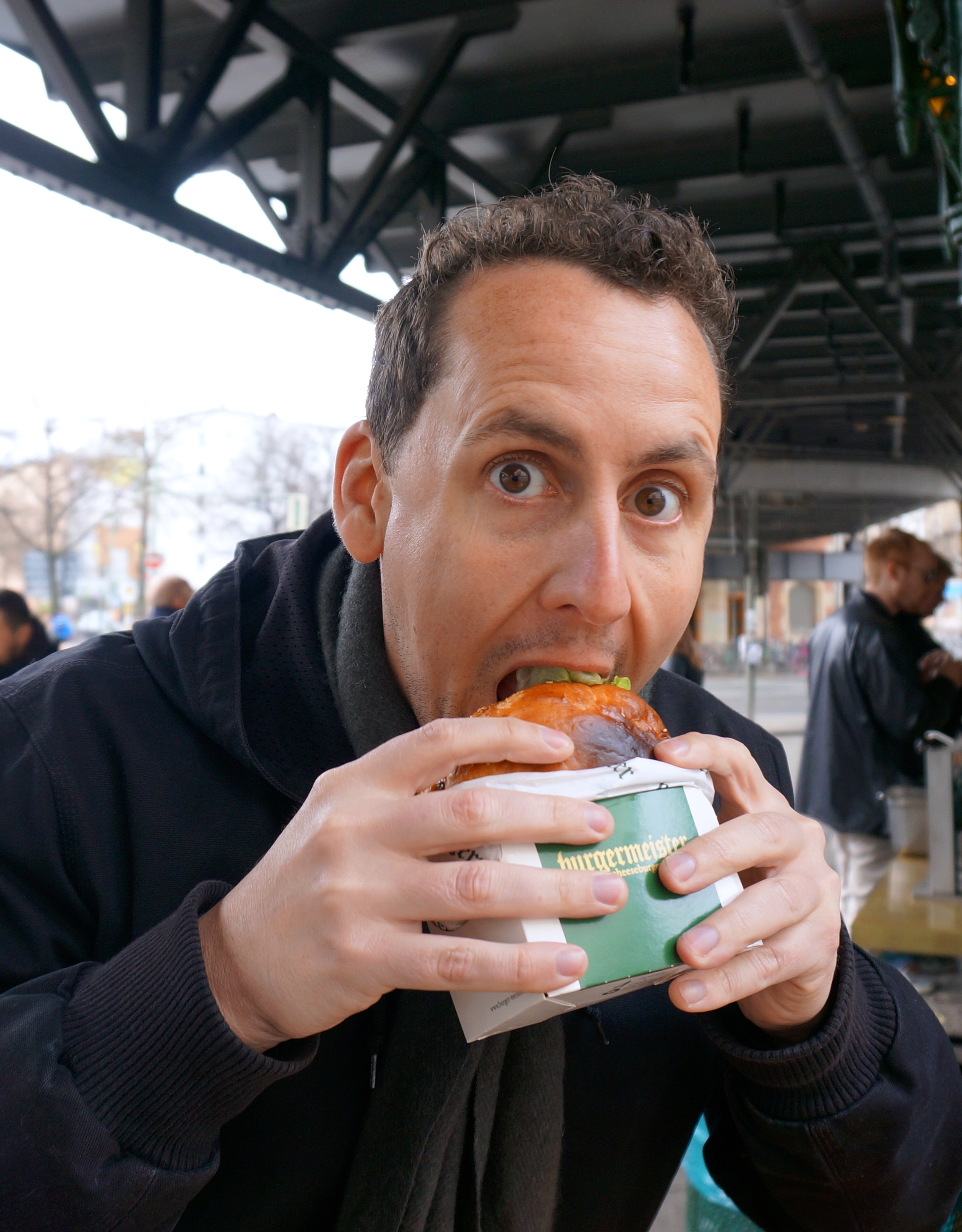 Our wanderings also took us down a street that had been divided by the Wall – East Germany on one side and West Germany on the other –  and yet it wasn’t a wide street, 15m across at most. A sign there told of the escape tunnels that were dug from one side to another. Some attempts had been hindered by informants that didn’t end well for the escapees.

Checkpoint Charlie is the famous crossing point between East and West during the cold war. Nowadays it’s a bit of a tourist trap. The museum, however, provides an in-depth history of Berlin from WWII through to the cold war. There’s lots to learn. I left wishing I’d listened more in history class.

One of the most amazing things in the museum are the contraptions built for escape. From the VW beetle that had been converted to encase a person in a suitcase-sized box near the engine, to kayaks with sails, ladders, zip wire harnesses that were little more than a strip of fabric and inventions using the power of flight. Some were more successful than others. It really gives you a sense of the desperation but also the hope and bravery of the people trying to escape as well as those that helped them.

After all that walking and learning we were ready for a sweet treat and were lucky enough to find this irresistible chocolate shop with amazing cakes and charming staff. 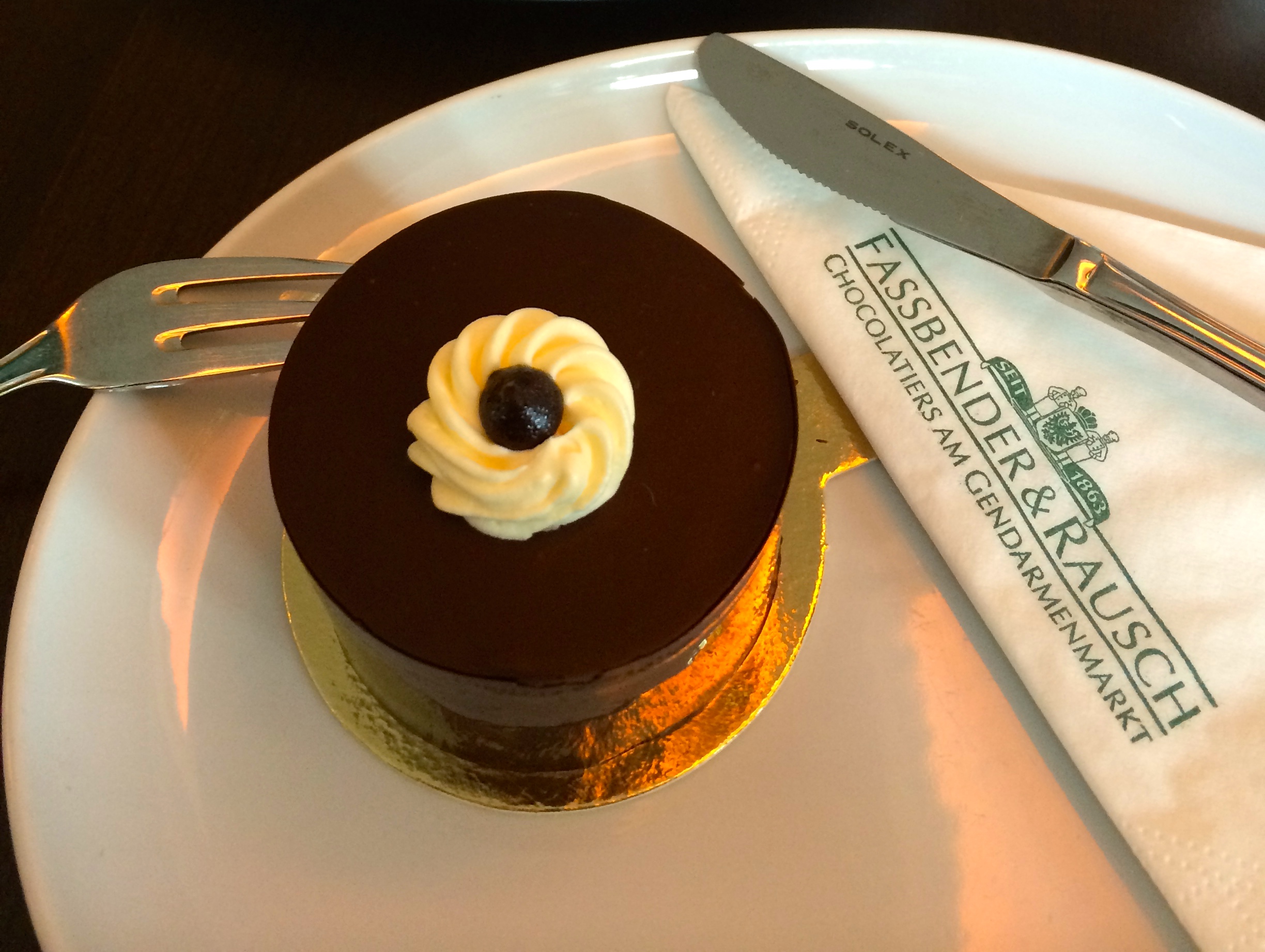 We returned to our hotel for a lazy evening, to get packed ready for the trip to the coast and to try to get some sleep knowing tomorrow we’ll meet our new yacht.