Crossing Biscay had been in the back of our minds for a while.

I’d read so much about this 340 mile ocean crossing – mostly lots of scary stories about boats getting into trouble or crews with a lot more experience than us being ‘out of their depths’ and being ‘crazy to take on such a passage’.

I’ve noticed that a lot actually, there’s a ton of people trying to scare the crap out of others when it comes to the sailing world. Not sure why this is but the more I read up the more I freaked myself out. Helen was very nervous whenever Biscay was brought up as well and I know our friends and family, while not maybe saying it to our faces were secretly thinking ‘Can they really do this? Should they really do this?’.

Everything we’d read and been told kept pointing to the weather. Again Pete Green from Haycon yachts was amazing with the advice he offered. Get the weather window right for 3-4 days and things would be tough, but doable. Get this wrong and you’ve got big problems out there and potentially very dangerous conditions that could hammer us and the boat into submission.

So we studied. We read everything we could on the weather patterns, and other sailors experiences with their crossings. We downloaded so many grib weather forecasts I saw them in my sleep. Nothing lined up. France would look good, but Spain had 35 knot winds. Then Spain looked good but a bad system was swooping over France. Ugh.

This went on for a solid week and a half. While we loved Cameret, it’s pretty small and being trapped started driving us crazy. We became locals and that’s always a sure sign you’ve been in a place too long. We had pretty crappy weather during this time which also limited our ability to see more of Brittany. We took to hopping on buses for day trips around the area but we both deeply regret not being able to see more of this coastline by sea.

Then we spotted a weather window that could work. A nice three day forecast of sun, lightish winds behind us, and fairly calm seas. We asked Pete what he thought, he said go for it! We spoke with a few others in the marina who were also waiting to cross, but for some reason they wanted even better conditions. I’m not sure the perfect conditions they wanted exist and believe they’ll be stuck in France for ten years waiting.

We discussed everything, downloaded the gribs for the 10th time that day and set off. It was great to be out at sea again. Interlude powered down the French coastline and then out to our first waypoint to the West. We hit this waypoint around 4pm and the chart plotter ticked over to the next waypoint, 300 miles away. Our hearts sank and were both thinking ‘What the hell are we doing?’ While 300 miles might not sound a lot, that worked out to 2.5 days in open water at the speed we were currently moving at. 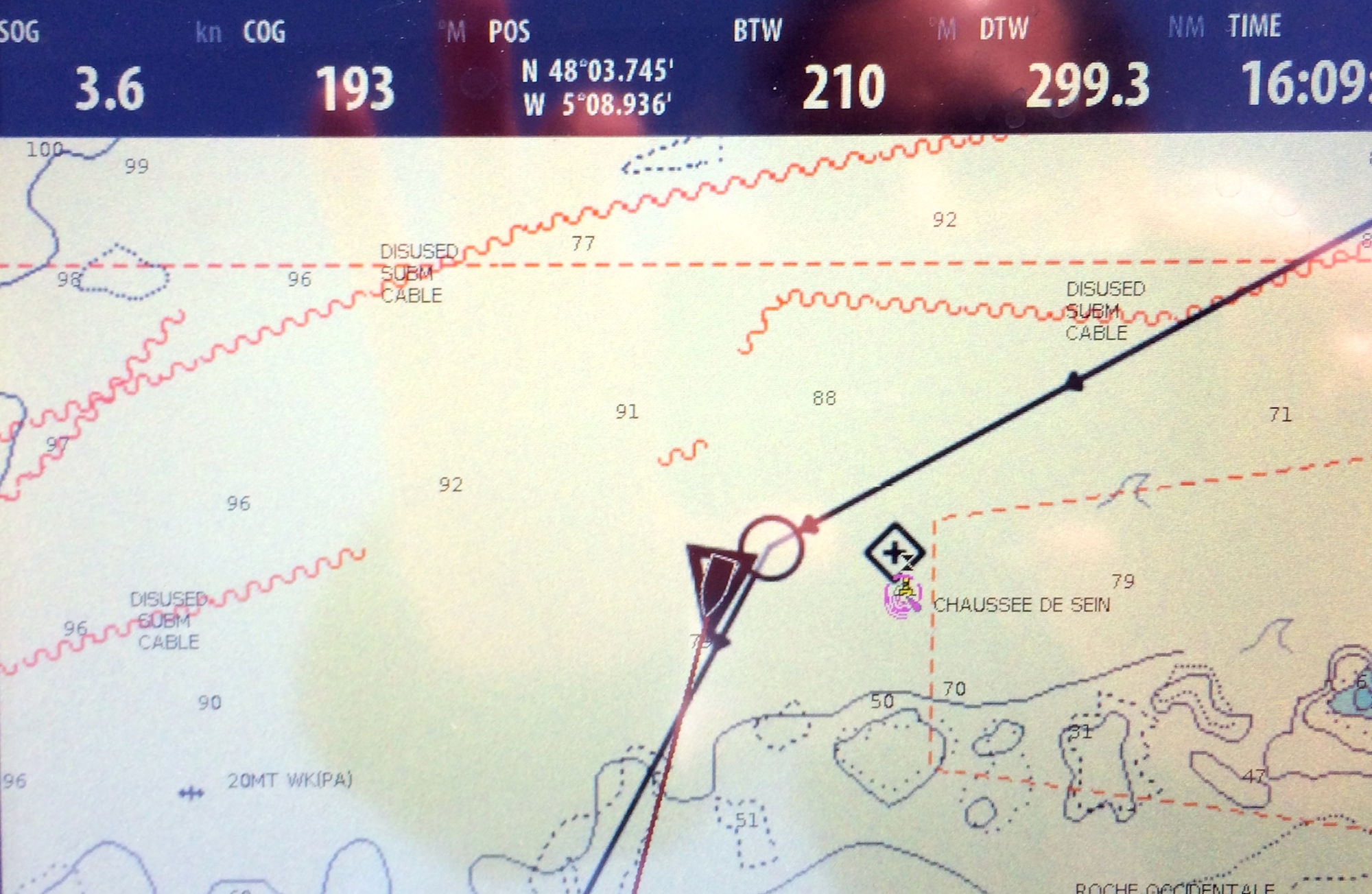 We remembered the training Jamie gave us and quickly got into our watch system of three hours on three hours off. This proved to be about right for us and let the person off-watch get some well earned rest.

The sun set we were in open water with no land in any direction. In the dark. On our own. 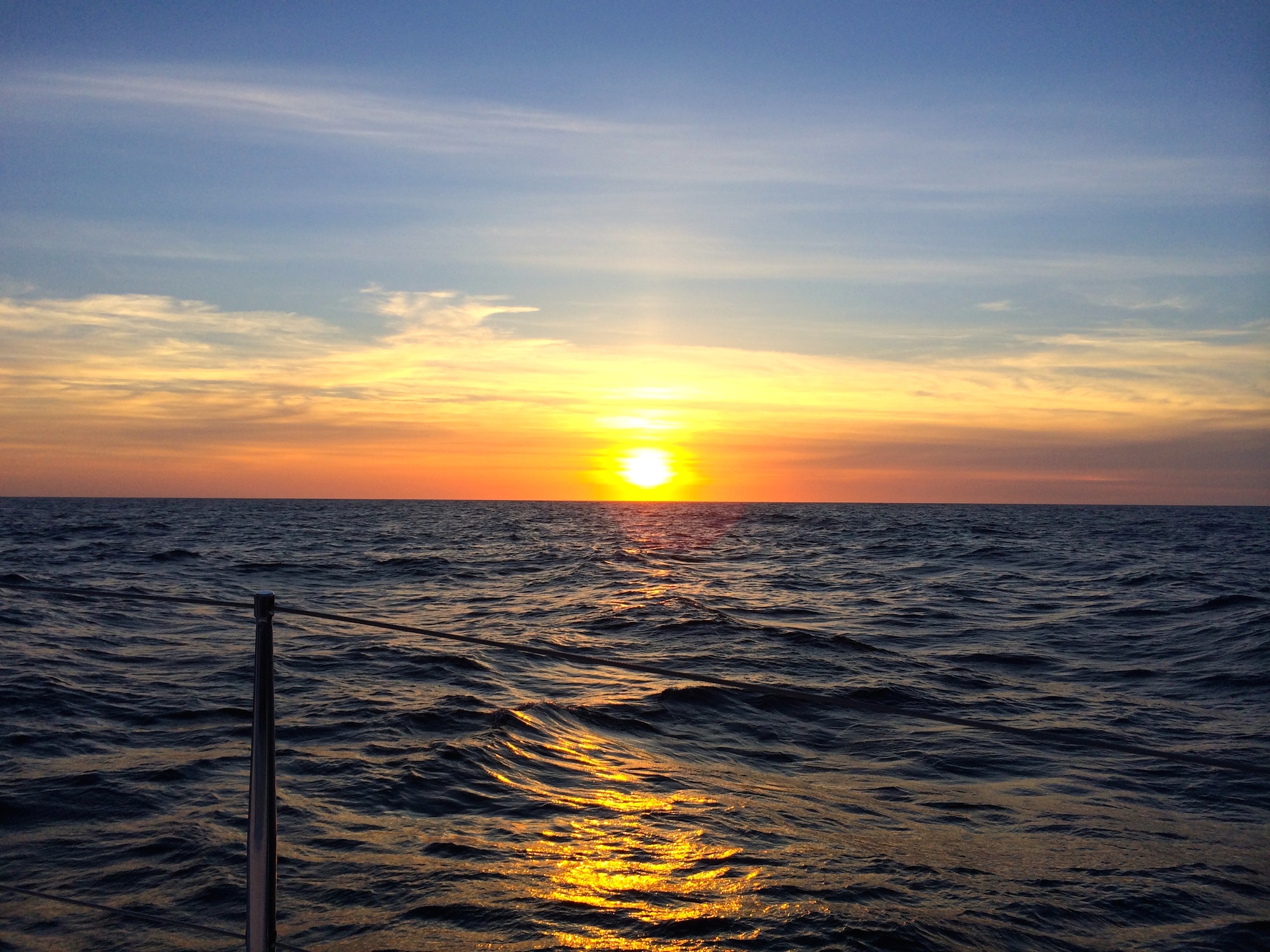 Around this time we also hit the ‘shelf’. We’d read so much about this (again most of it designed to scare us for some reason). The ‘shelf’ is the continental shelf around 50 miles off the coast of France. Basically an underwater cliff face where the depth drops from around 40m to over 4500m in a matter of minutes. This, we’d read, could cause very confused seas, waves that were as high as buildings, sea monsters, and countless other snares designed to send us to the bottom of the deep blue sea.

As it happened (I hope due to our planning) we passed over the shelf without any noticeable changes. An anti-climax if ever there was one. For anyone planning this trip. Pick a good window. Check the swells. Go directly from point A to B. Ignore all this ‘head out West’ rubbish and enjoy it. It’s not as bad as everyone makes out.

I don’t want to sound cocky though. I have to say there were times during some of my watches (especially at night) where I did scare myself into thinking I wasn’t up to this. The experience coming over from Germany to the UK was amazing but we always had professionals with us. We’d debated having some crew with us on this trip also but decided in the end that if we were going to do longer trips we needed to prove to ourselves that we could handle long passages.

The watches kept ticking over. The days were sunny which makes all the difference. To be out on deck, warm sun on you, music on – great fun! 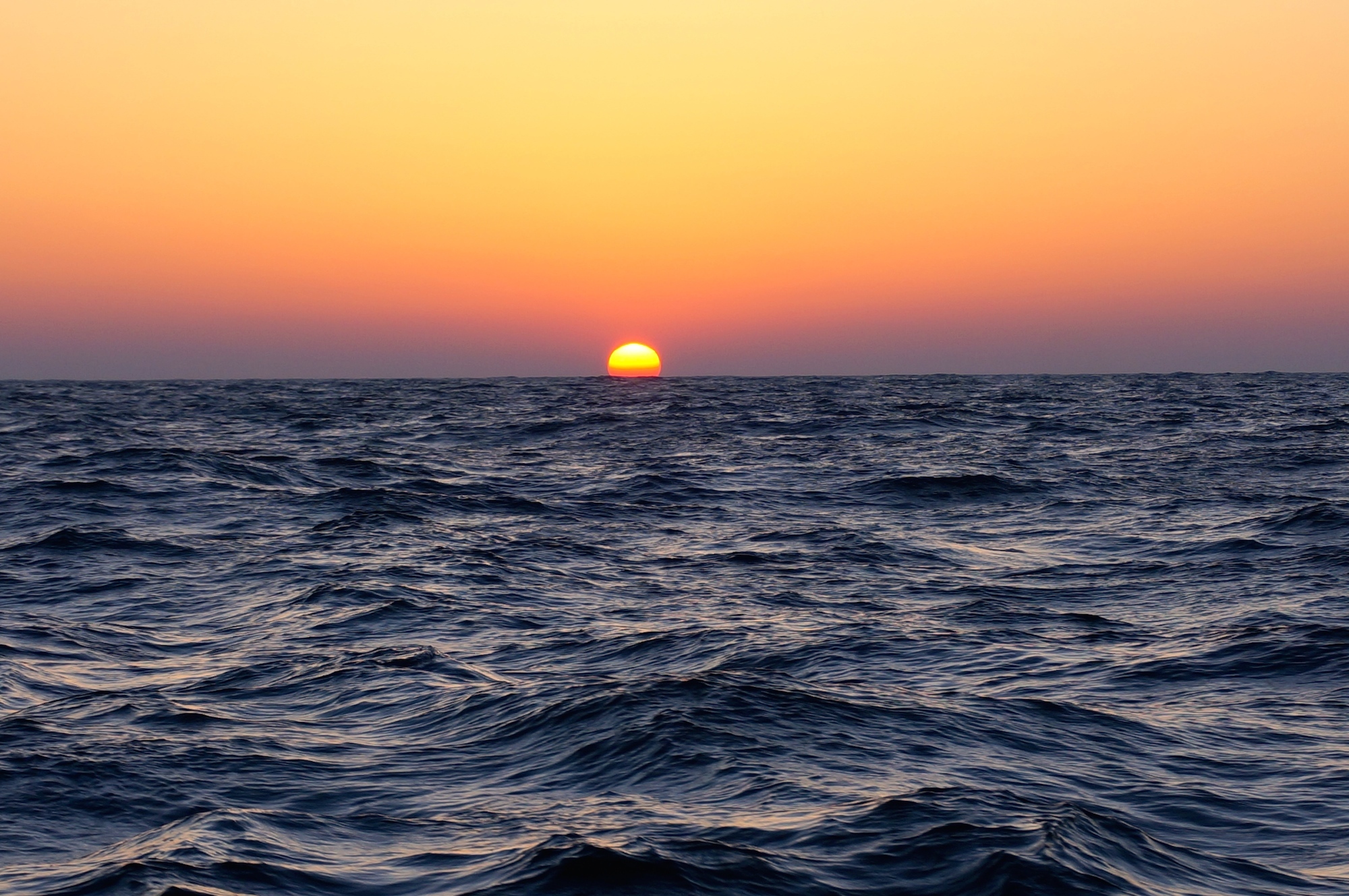 We saw so much life out there. Birds, countless dolphins playing in our wake in the moonlight, whales crossing out path heading out into the Atlantic. I don’t think we’ll ever get tired of seeing dolphins.

The nights were amazing as well. We had a full moon which rose a few hours after sunset lighting the ocean up until morning. Totally unplanned but something we’ll definitely keep in mind for future trips. The few hours before were total darkness and I didn’t enjoy them at all. You really have no idea where you are, what’s around you or what could be about to hit you – very freaky. 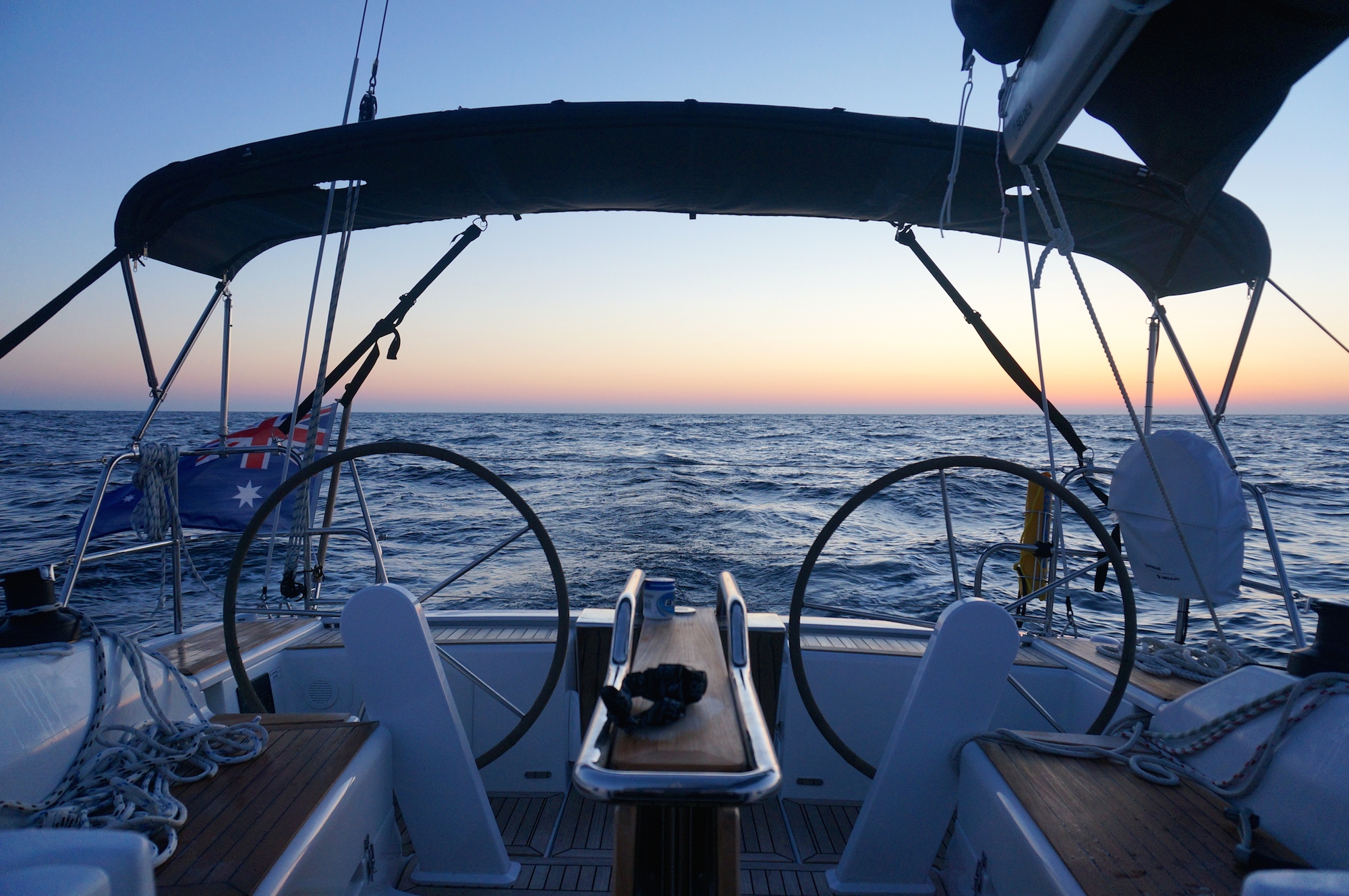 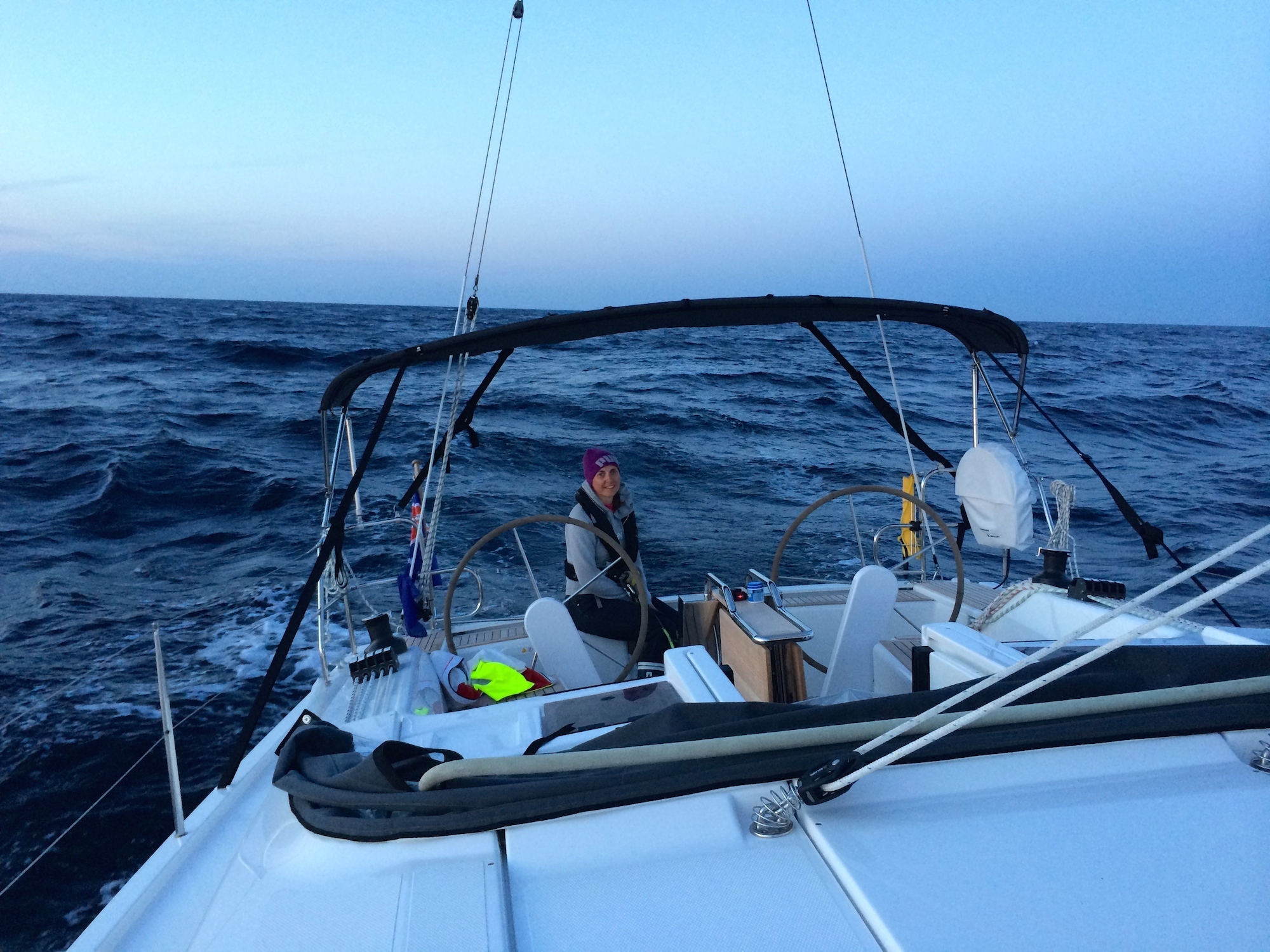 Day three was the hardest. We were both completely over being at sea and, knowing land was only a few miles away, wanted to get there as soon as possible. Those last 20 miles seemed to take as long as the other 260 since the last way point but we finally spotted Spain on the horizon and make it into port just as it got dark.

Looking back now I’m so proud of us for making this passage on our own. Being 160 miles from land in the middle of the bay really does put things into perspective. You really are on your own out there but we put the time into our planning and preparation, and in the end it paid off. Would I want to do it again right away? No. But the experience, and confidence we gained were invaluable and it was a damn enjoyable trip to boot for the most part.

Time to rest up, fix up some issues we had with the boat, and enjoy Spain.

3 thoughts on “Bay of Biscay crossing”