For a long time when planning this trip, we’ve often asked ourselves, “I wonder what we’ll be doing on our Birthdays?” Anyway it’s hard to plan as we’re always so dependent on the weather and when it came to it, Mother Nature stepped in again. Yep she blew a bit of a guster, so our best option was to race around to the other side of the island and hide in an anchorage. It’s seems to be our one and only defensive weapon at the moment.

Anyway I think Mother Nature and I would get on rather well as she picked some stunning bays.

First Cala Trenc, a beautiful long bay on the South Coast of the Island. Due to the forecast (strong Northly winds and big swells) we decided to stop here for a few days, protected from the wind by land. It was cloudy most days which was refreshing and sometimes a little daunting. 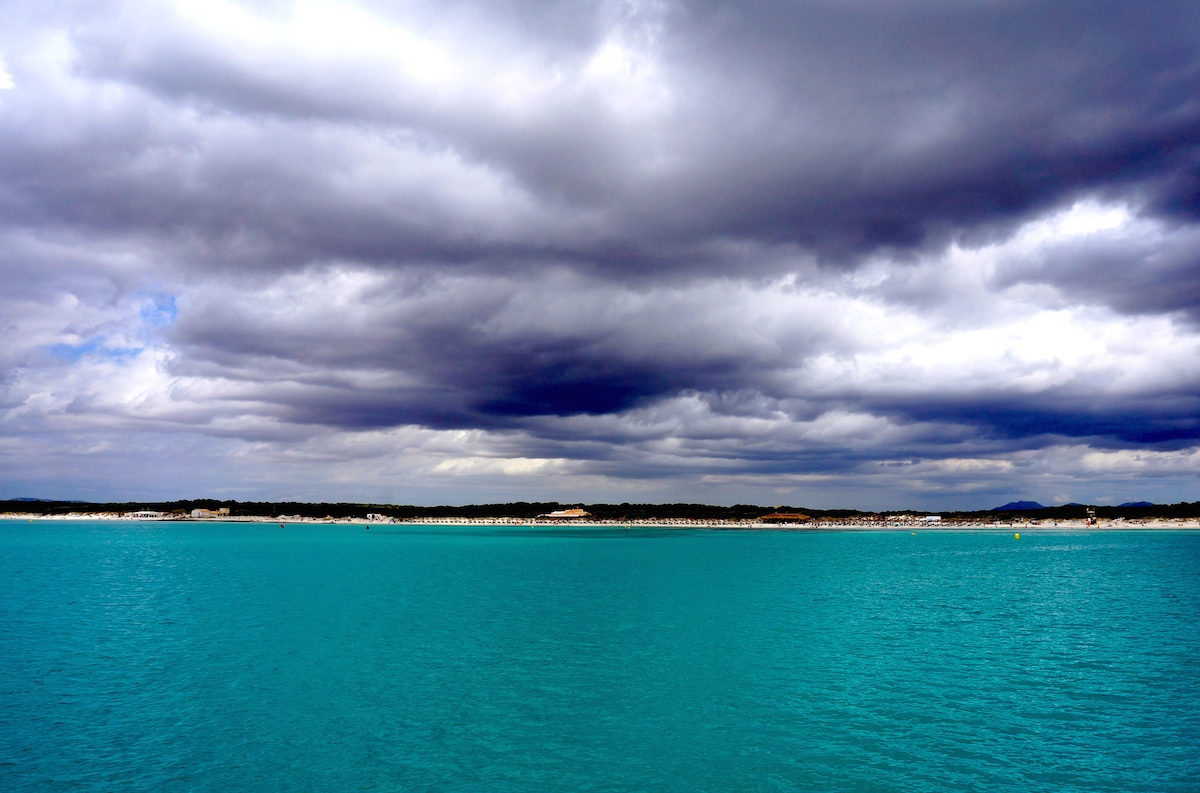 Staying here for a few days gave us some time to just chill the hell out. We spent some of this time practicing our dives, bombs and pencils. You never know when you’re going to need them.

The first night we headed over to the beach to explore and have a beer. As we were making our usual elegant landing from the dinghy we were approached by a couple and their friends who asked us to take their kids for a dinghy ride. These kids were all as cute as buttons so who could deny them? Not Simon.

First the boys, who apparently had never been in a boat before, and then the girls as they didn’t want to miss out. The parents were made up, except for the mother of the littlest girl who couldn’t yet swim (whoops). The kids didn’t seem too impressed with our electric motor and kept asking if they could go faster. Anyway Simon pulled off a fair few donuts before returning them to the shore, leaving us wondering if we’d have drained the battery and would have to row back. Still it earned us a beer so we were happy with that. 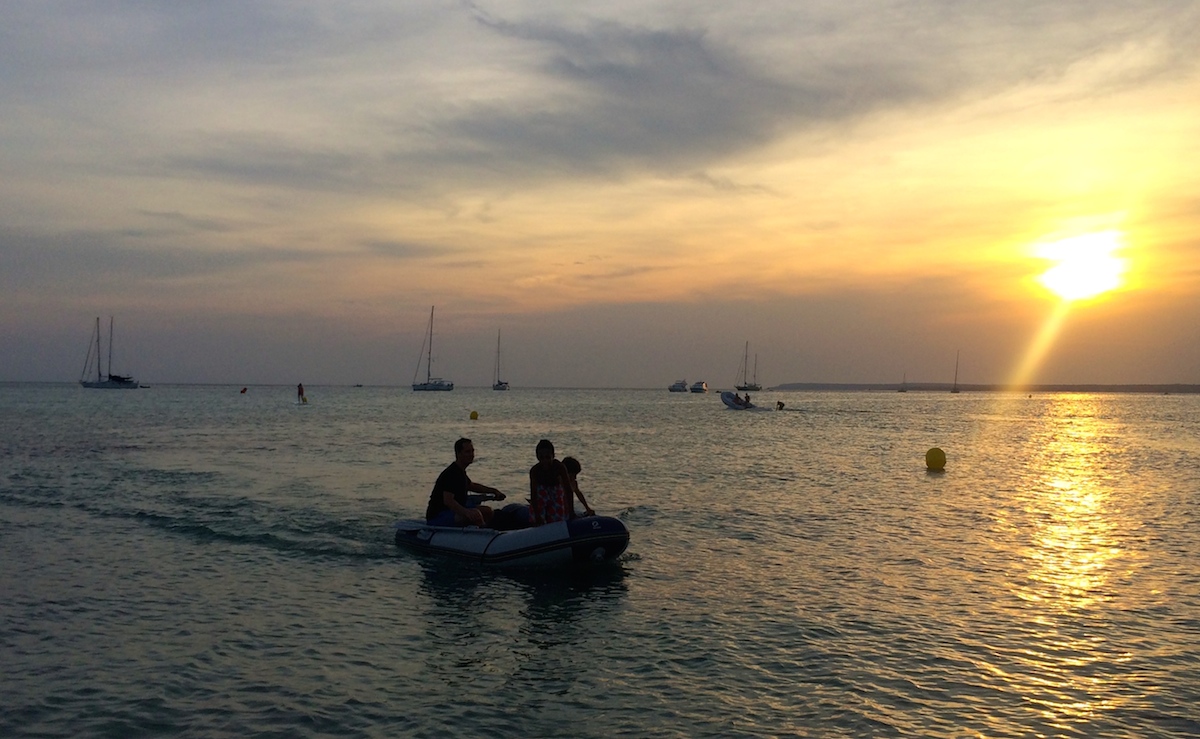 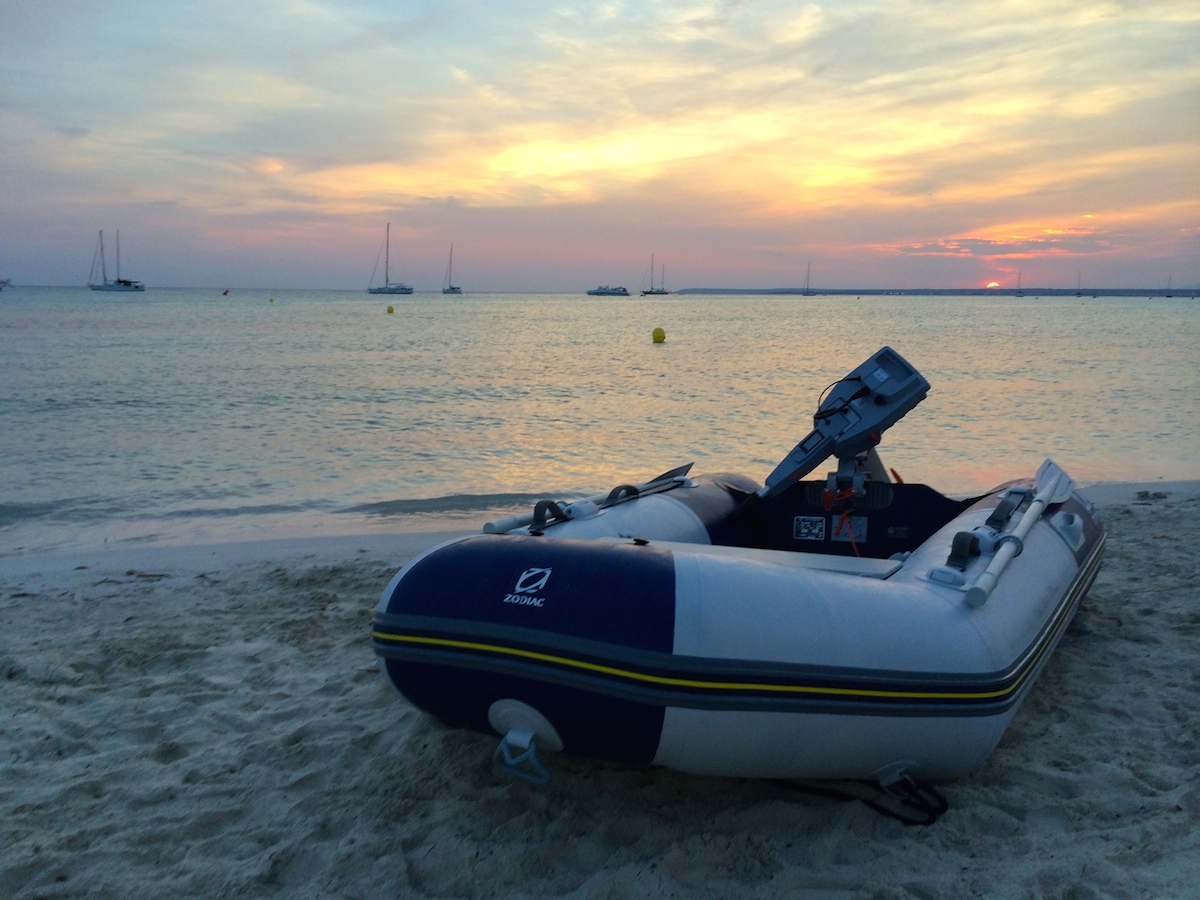 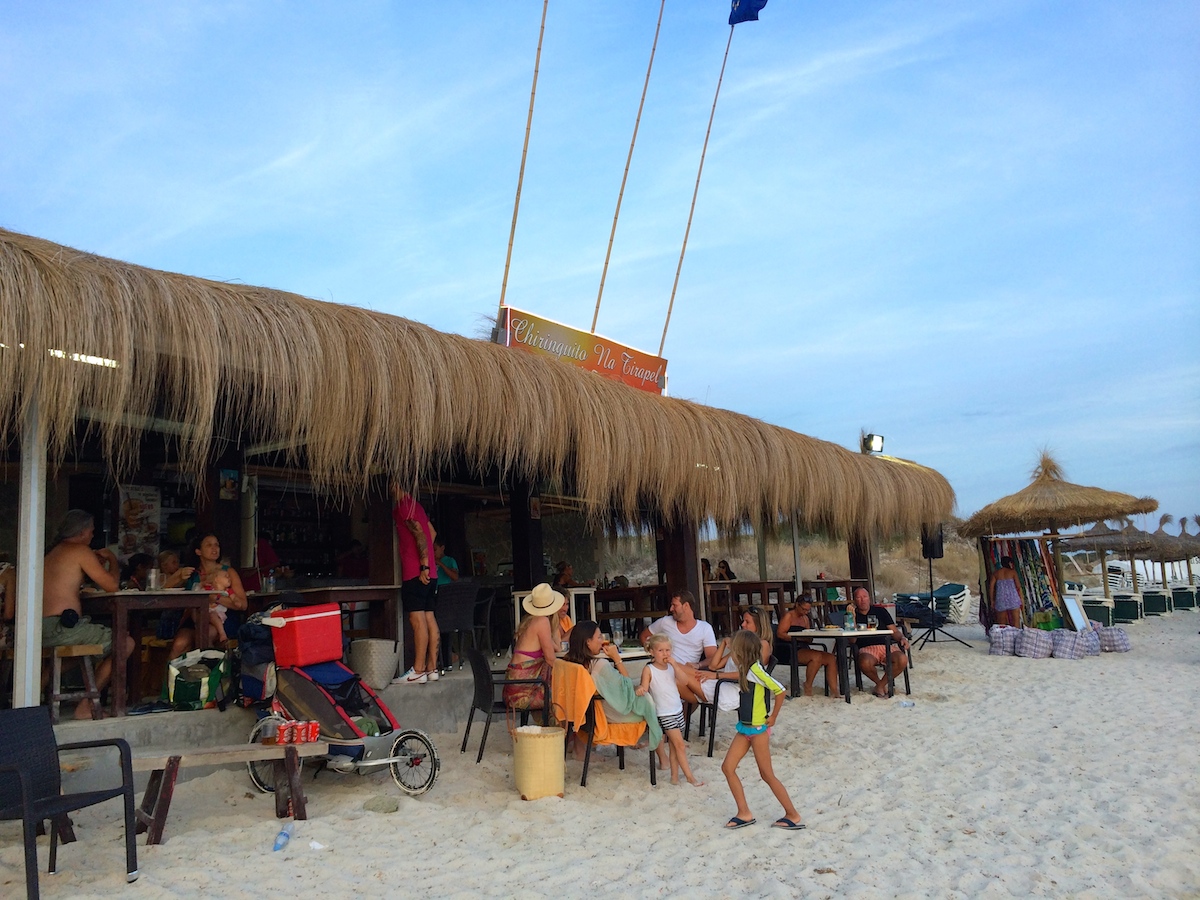 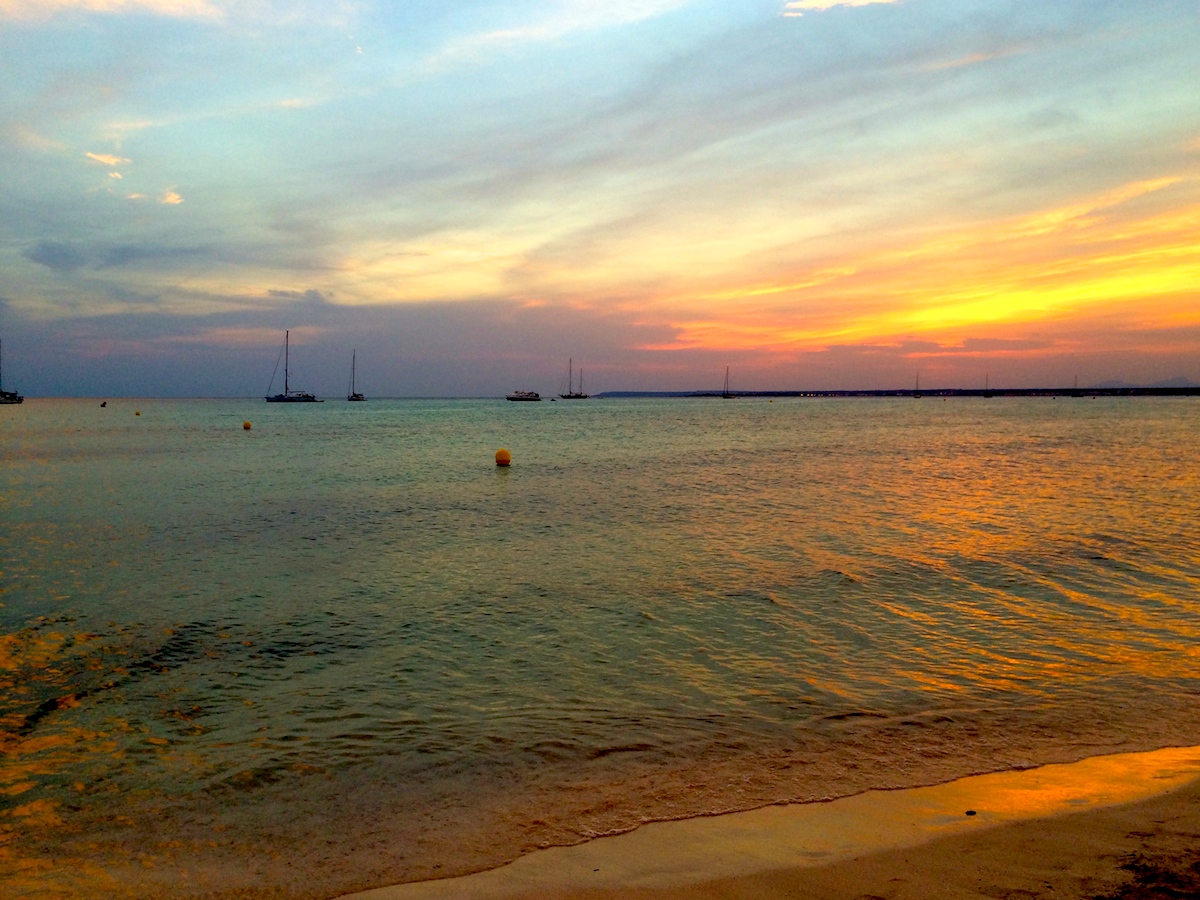 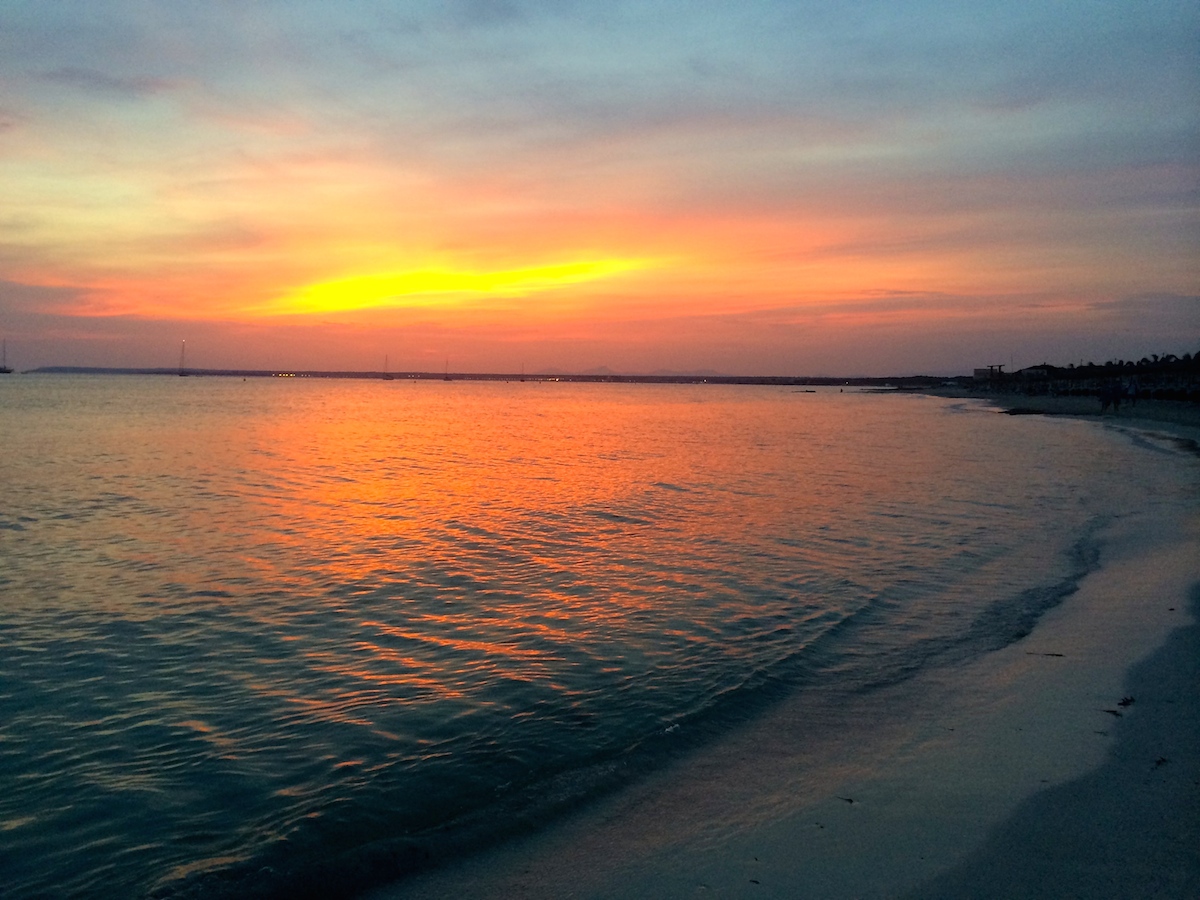 Next day Simon spoilt me rotten for my birthday. First up, bacon and egg sangers. It was hilarious to watch him try and crack an egg before we realised they were hard boiled. Well how were we to know? So bacon and cold boiled egg sangers – not bad! 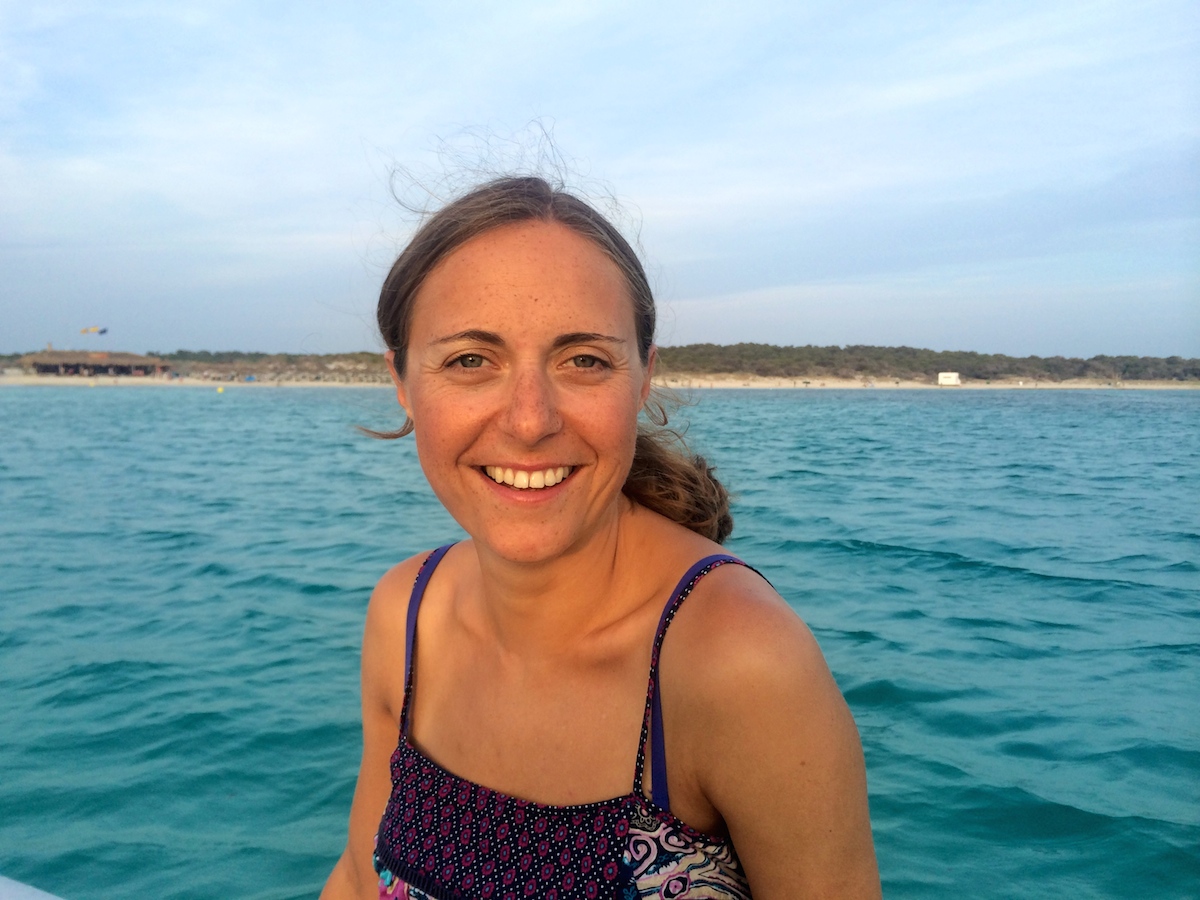 Then a coffee and scrumptious cake at the beach bar – no singing – perfect! 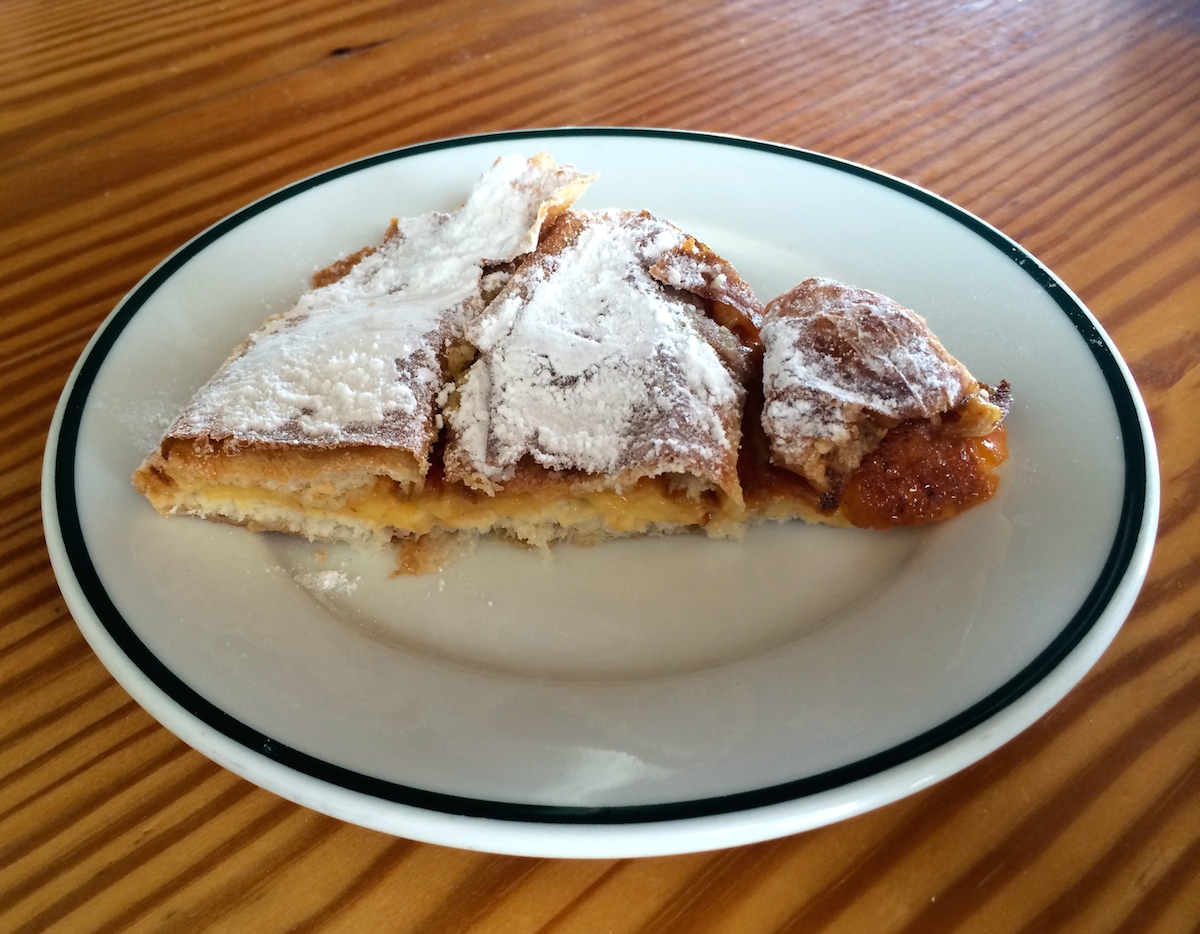 Followed by a long walk down the beach right to the nudist end – ding dong! – and back. And then a bottle of bubbly with some steak and veggies as the sun set. 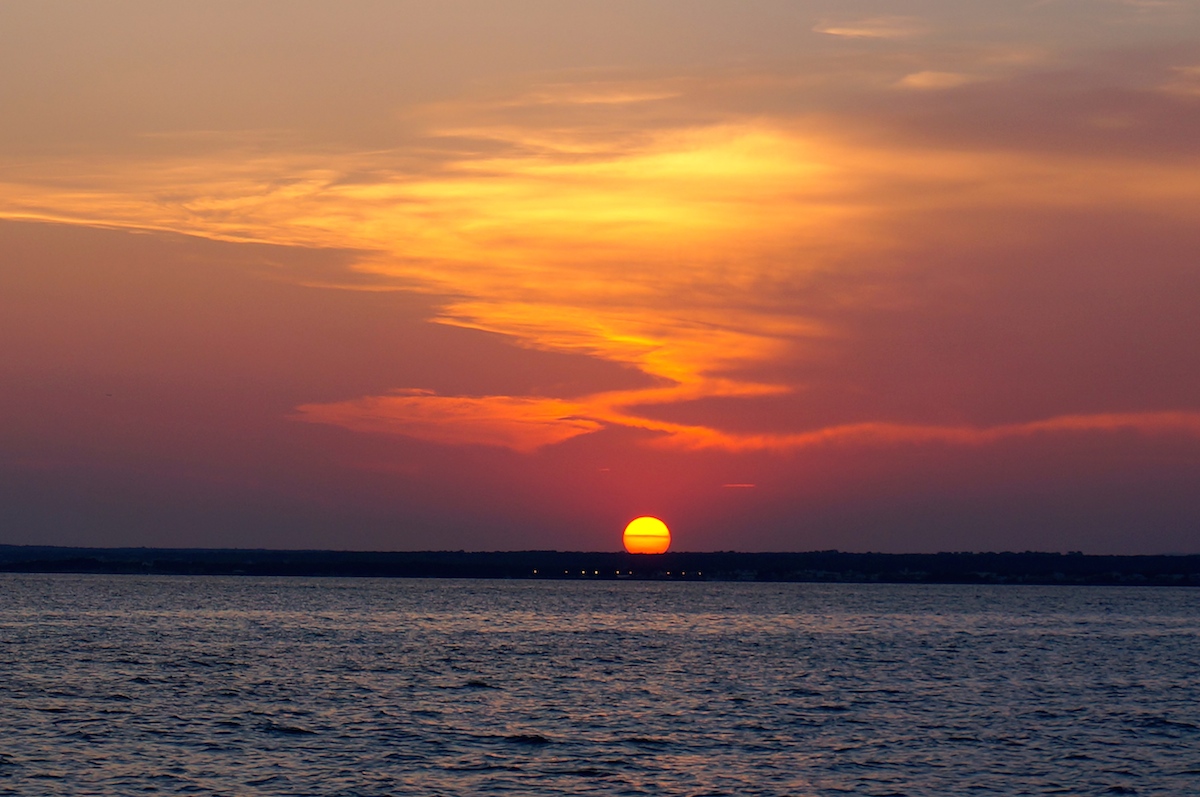 I’m not sure I could have had a better Birthday if we’d planned it.

Once we reluctantly escaped Cala Trenc we decided to make our way onwards and upwards. We were headed originally for Cala Barcus but on reaching there saw that it was crowded and super swelly so kept on sailing. This swell thing is really starting to catch us out and the wind was howling too, plus a dirty great big cloud appeared overhead and it started to feel like the end of the world. We were keen to find some shelter as it can get a bit scary.

Anyway we literally headed into the next bay, following a glass bottom boat, and found just enough anchorage for one 38” boat. Score! 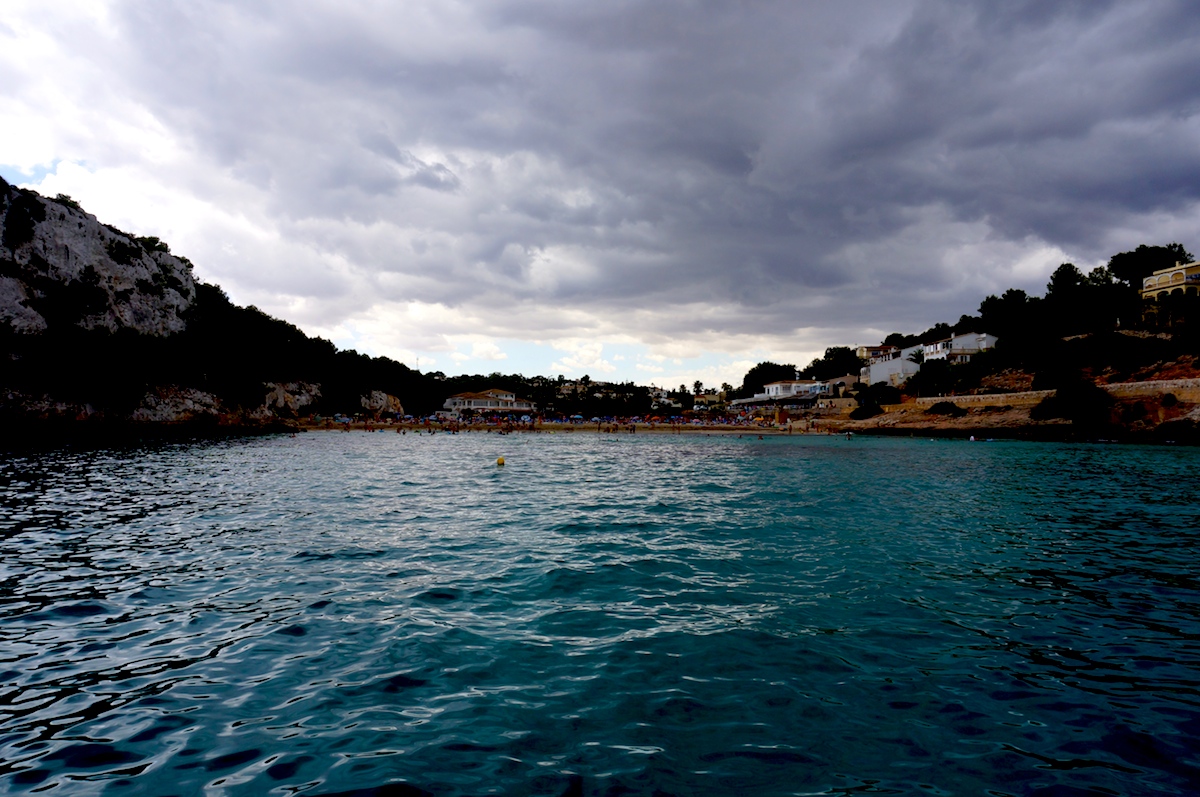 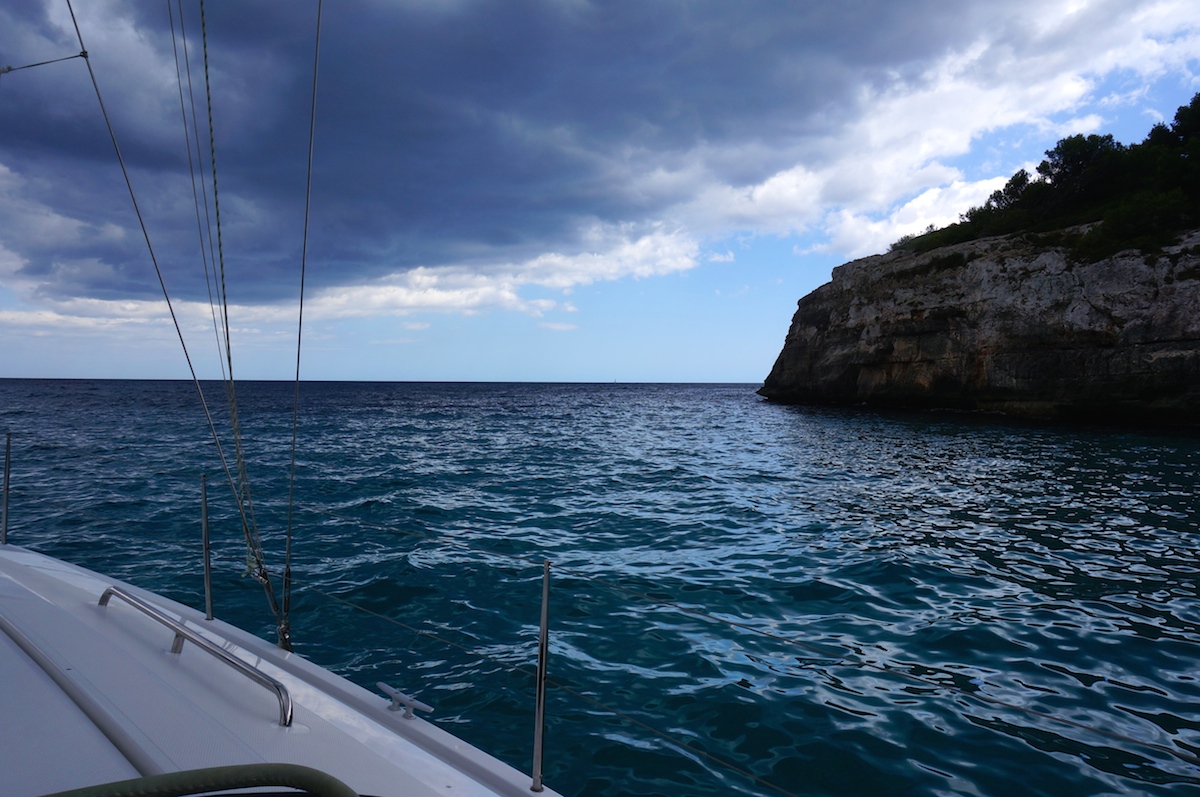 It was a nice rocky inlet that provided good protection and just enough swing room not to annoy the glass bottom boat captains too much (I hope). A few hours later the cloud disappeared and sunshine came out. This mean’t that we had the courage to leave Interlude unattended for a while and head inshore. 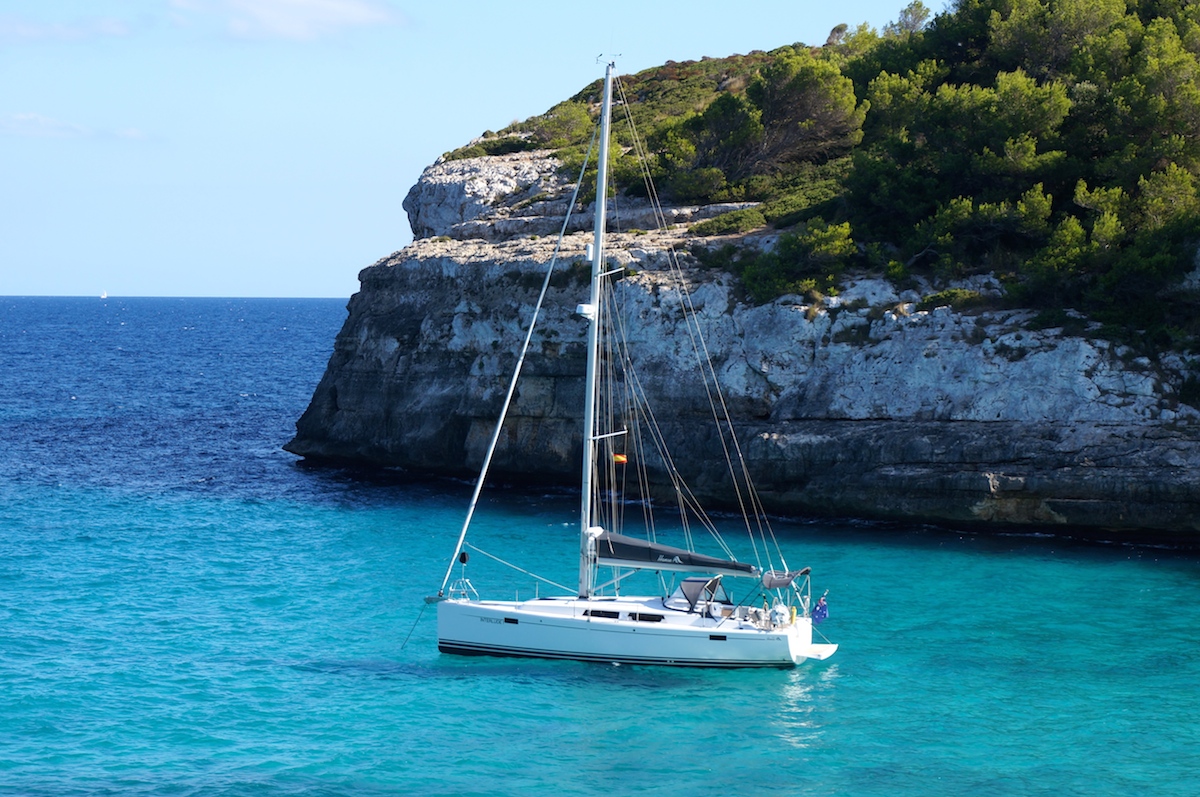 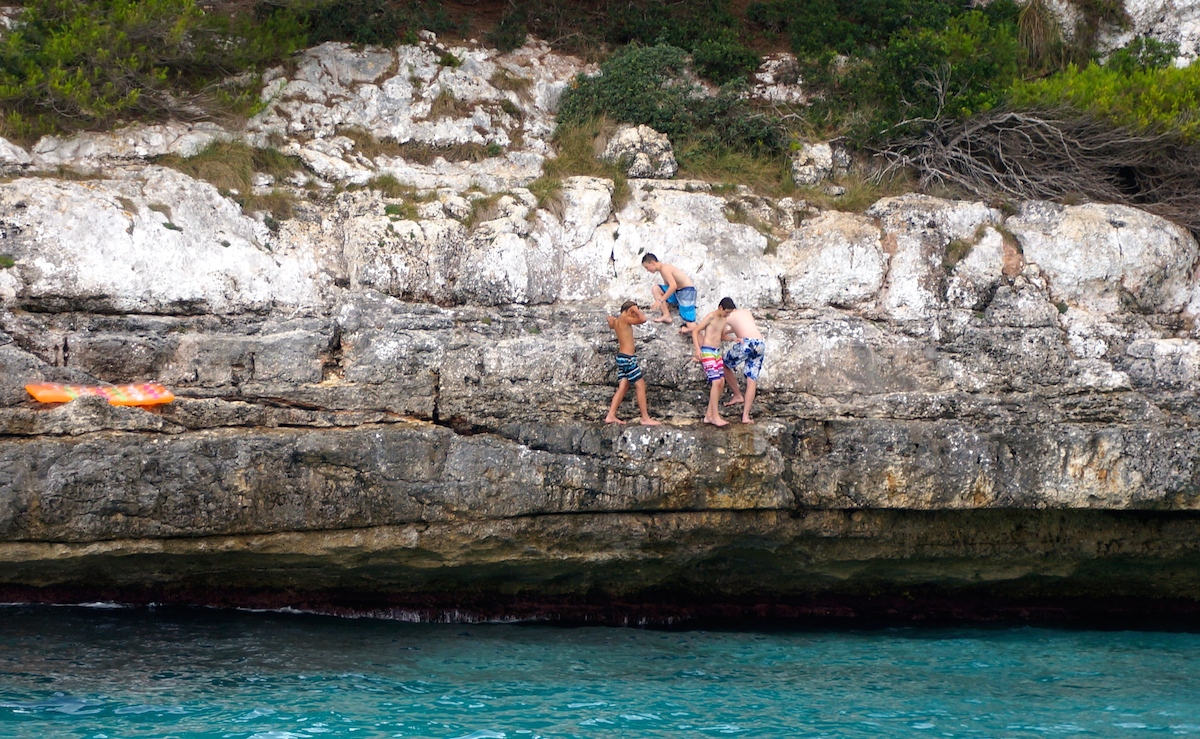 Sometimes this place naming thing really catches us out, the name in the pilot is not the same as the one on the chart or the one that someone has recommended. Anyway this place was called Cala Estany D’en Mas on the chart but the beach bars called it Cala Romantica (maybe it’s a sodding marketing ploy or maybe it means the same thing?)

Anyway it was a lovely, romantic place with a bricked coastal path that provided a good viewing platform overlooking the bay and beach, and a couple of bars that served us up a great plate of fishy pasta and a beer.