We were so glad to finally make it to Cagliari, we’ve been looking forward to this place. It’s also the home town of the Cattels (my sister’s partner’s paternal family) so it’s nice to have that connection.

We stayed at St Elmo marina, which was a bit out of town, but the service was fab and the facilities were better than most we’ve had in Italy. The walk down the waterfront is nice and avoids the busy main road.

The town has great cafes and restaurants. We had a great chocolate cake, but with apricot jam in the centre.

Sharon, I kind of get what you mean with the cake and jam thing. Although you can’t beat a homemade Victoria sponge – thanks Alan!

Everywhere we’ve been just lately we’ve seen Italians drinking these huge orange drinks and we’ve wondered what they are. We finally plucked up the courage and asked a waitress for one. Aperol and spritzer – tastes like burnt orange, quite refreshing but not sure we’ll be having another for a while. We also got some free sangers 🙂 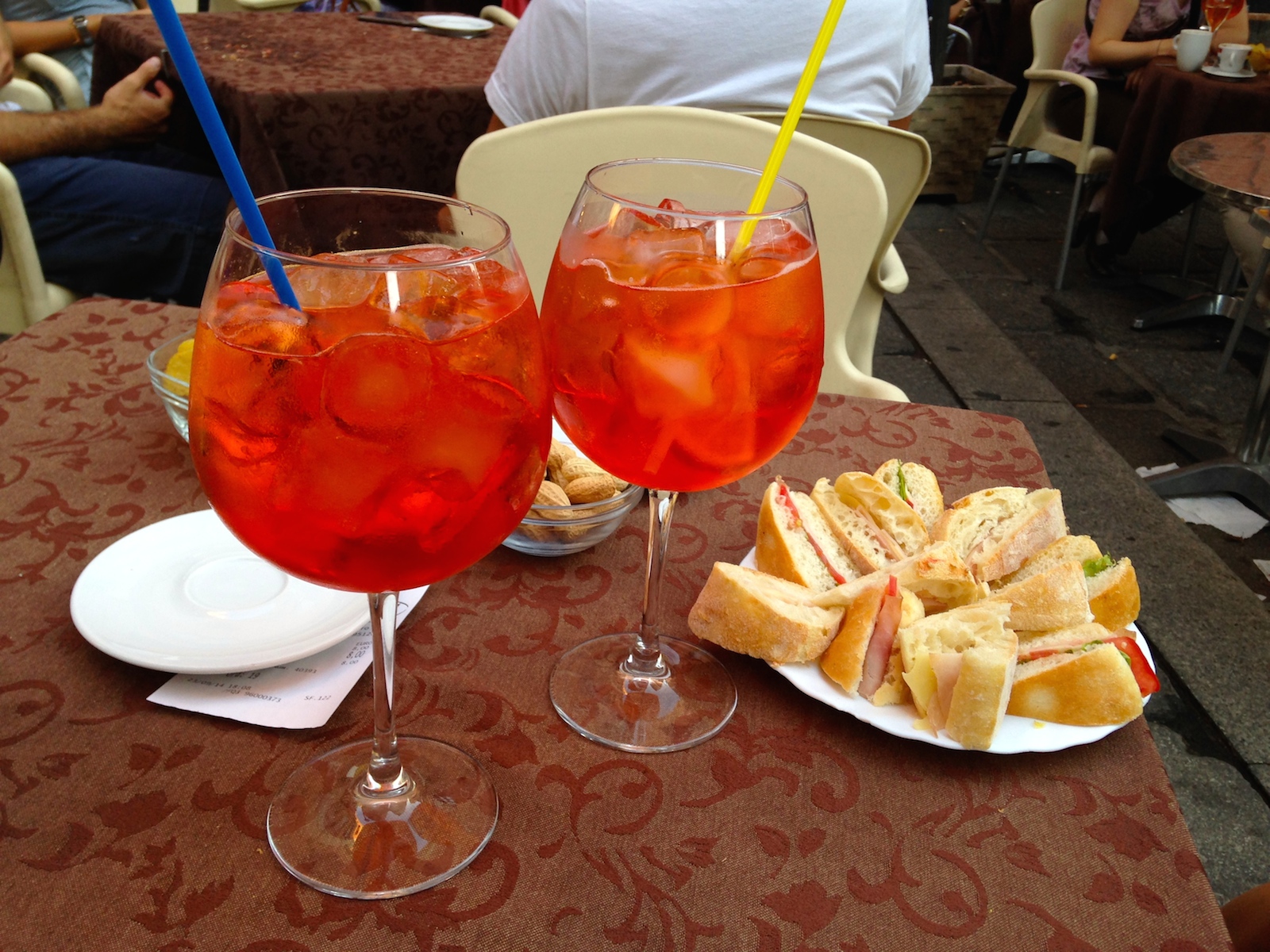 We went to an amazing deli that doubled as a wine bar at night. Had some great local produce – cheeses and hams – and some totally awesome wines. 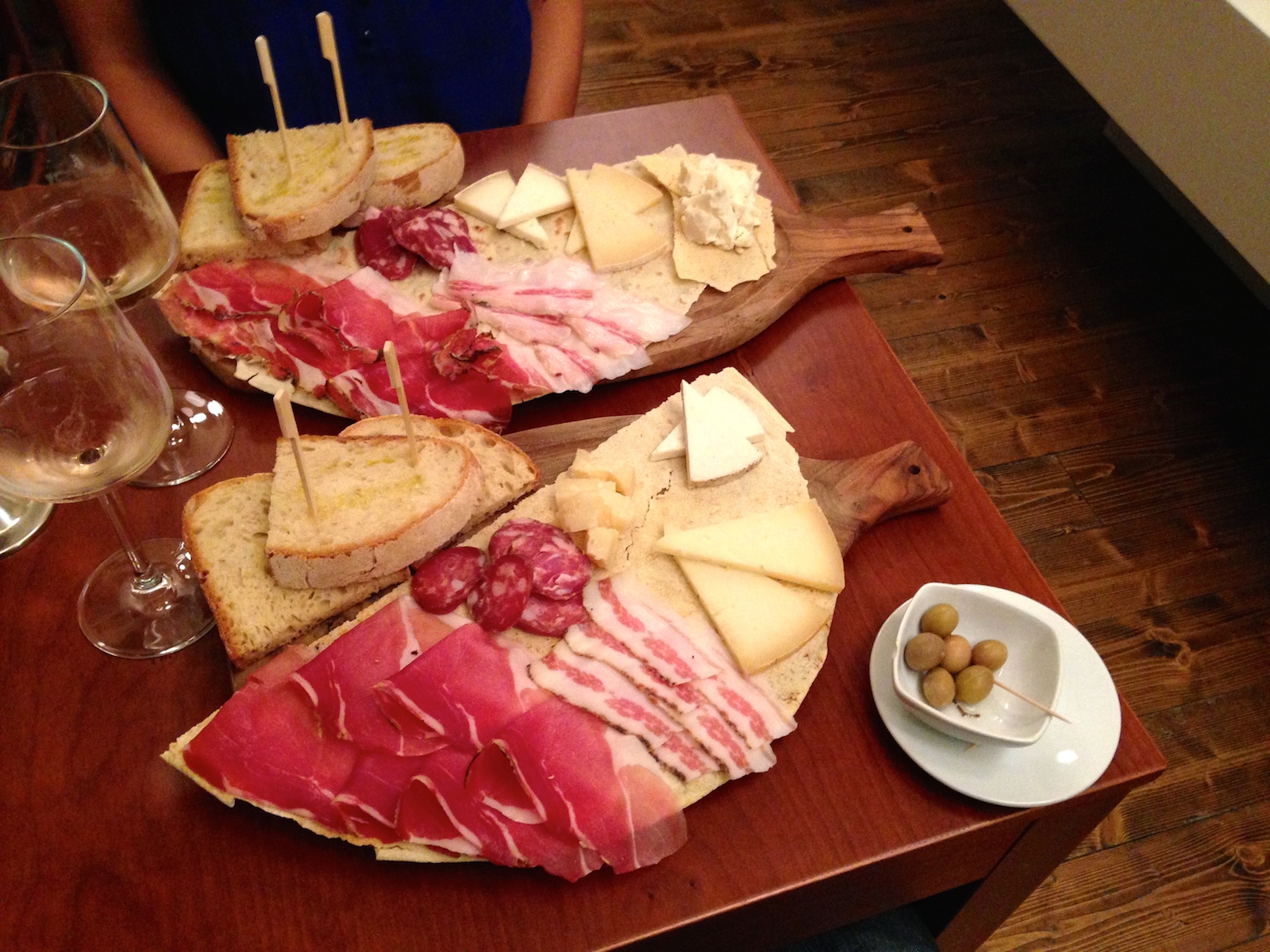 We also went to a local bar where the locals were watching their local footy team play. Unfortunately they lost but it was a great atmosphere and the people were so friendly. 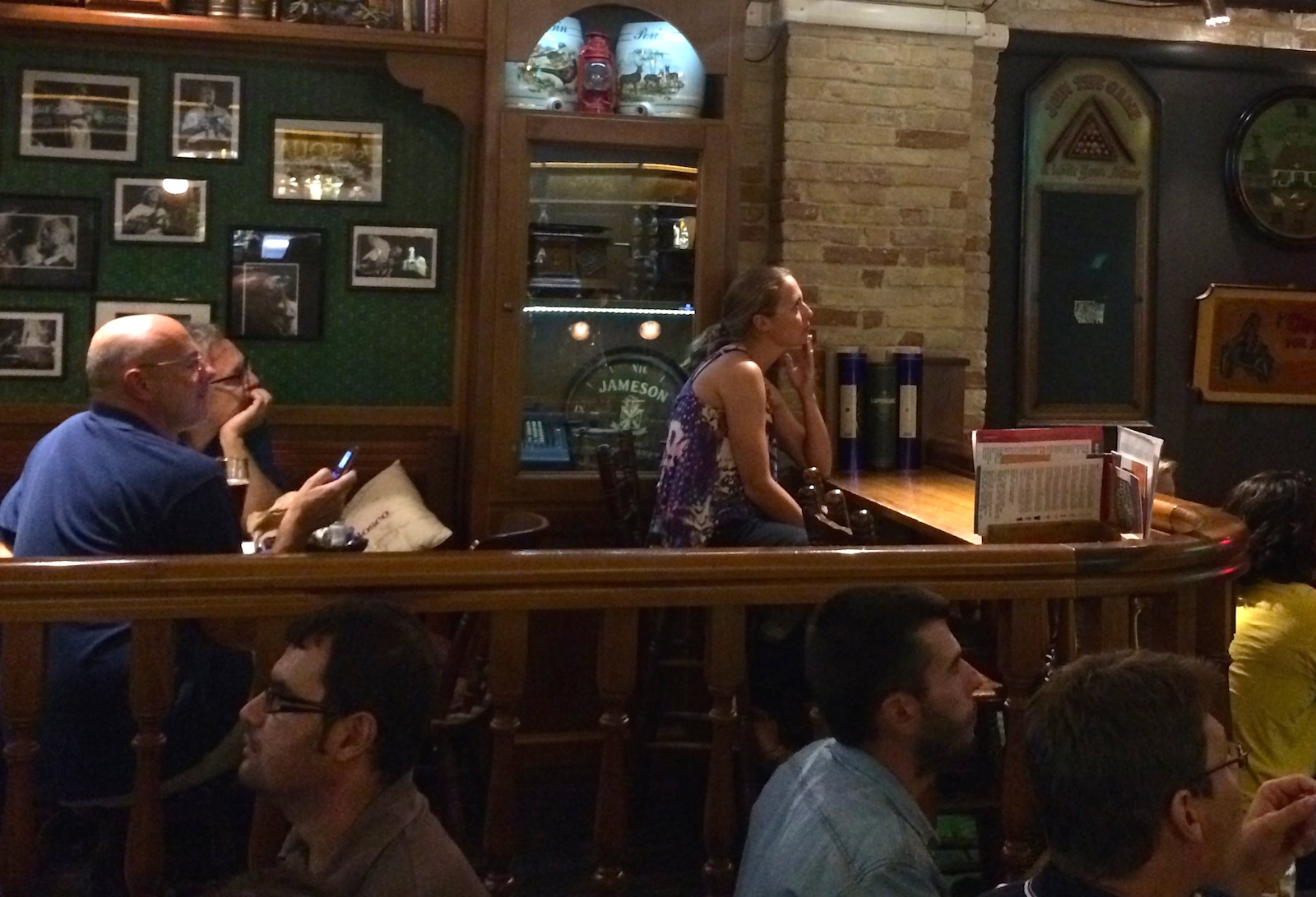 The next day we took our huge shopping list into the chandleries and came out with one or two items. Typical! Phone credit is also one of our biggest headaches and a trip to the phone shop can take an hour. After that we were in need of some R&R.

The local cafes were closed but we’d seen a Maccas the day before and were sure we could find it again. When we found it we though it was closed – in a permanent boarded up kind of a way – so kept walking to find the new one. Half an hour later we were back in the same spot and followed some students into a 1980s style Maccas. It was inside the ticket office of the bus station and had somehow managed to miss out on every refurbishment and upgrade of the last three decades. It felt like the bread rolls had come from that time period as well and we realised that we’d wandered around so long that the local cafes were probably open now. Fail!

We eventually made it back to the boat with our supplies. After our long crossings we had some rest to catch up on. We were relaxing in the front berth when we heard a few familiar cries from nearby. Next thing CABOOM!! We both raced on deck. In all honesty I was abandoning ship. A heavy metal boat had lost control in the 15 knot cross winds and had come to rest against our anchor and the anchor of the boat next door.

We jumped about like crazy people with boat hooks and fenders before settling into polite conversation with the sailors onboard as we held the boats apart. They were a really nice American couple who had travelled all the way from the US with the ARC Europe rally and were hoping to settle in Sardinia. Anyway not much damage done, a scratch on our anchor and a few scratches down the side of the American boat. The marinaros cleverly attached a line across the marina to their front cleat and using the winch on the boat pulled the boat slowly into the berth opposite. All’s well that ends well. 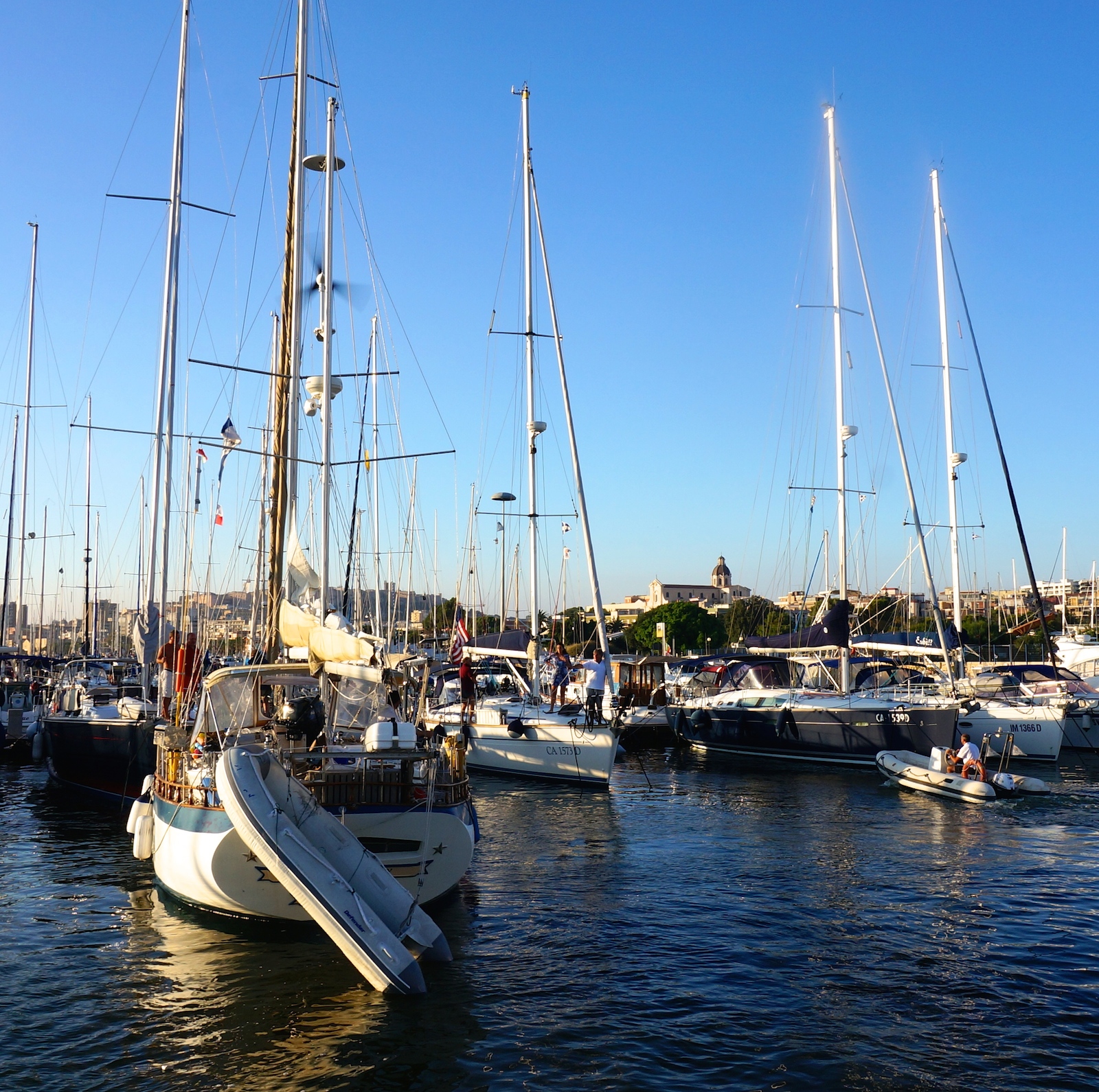 The next day we decided to explore more of the local area. One of the big attractions are the salt plains which are the habitat for hundreds of flamingos. It was just a few kms away so we set off on foot. We both knew there was a major road in the way but secretly hoped that there would be an underpass or bridge – nope. Simon came to the rescue though and managed to find another park atop a hill that overlooked the plains so we headed there.

The salt plains are pretty in themselves, rectangles of lilac, green or blue. And if you look close enough there were lots of pink dots! Not really the up close and personal experience I was hoping for but the ice cream in the sun almost made up for it. Nice views over the town too. 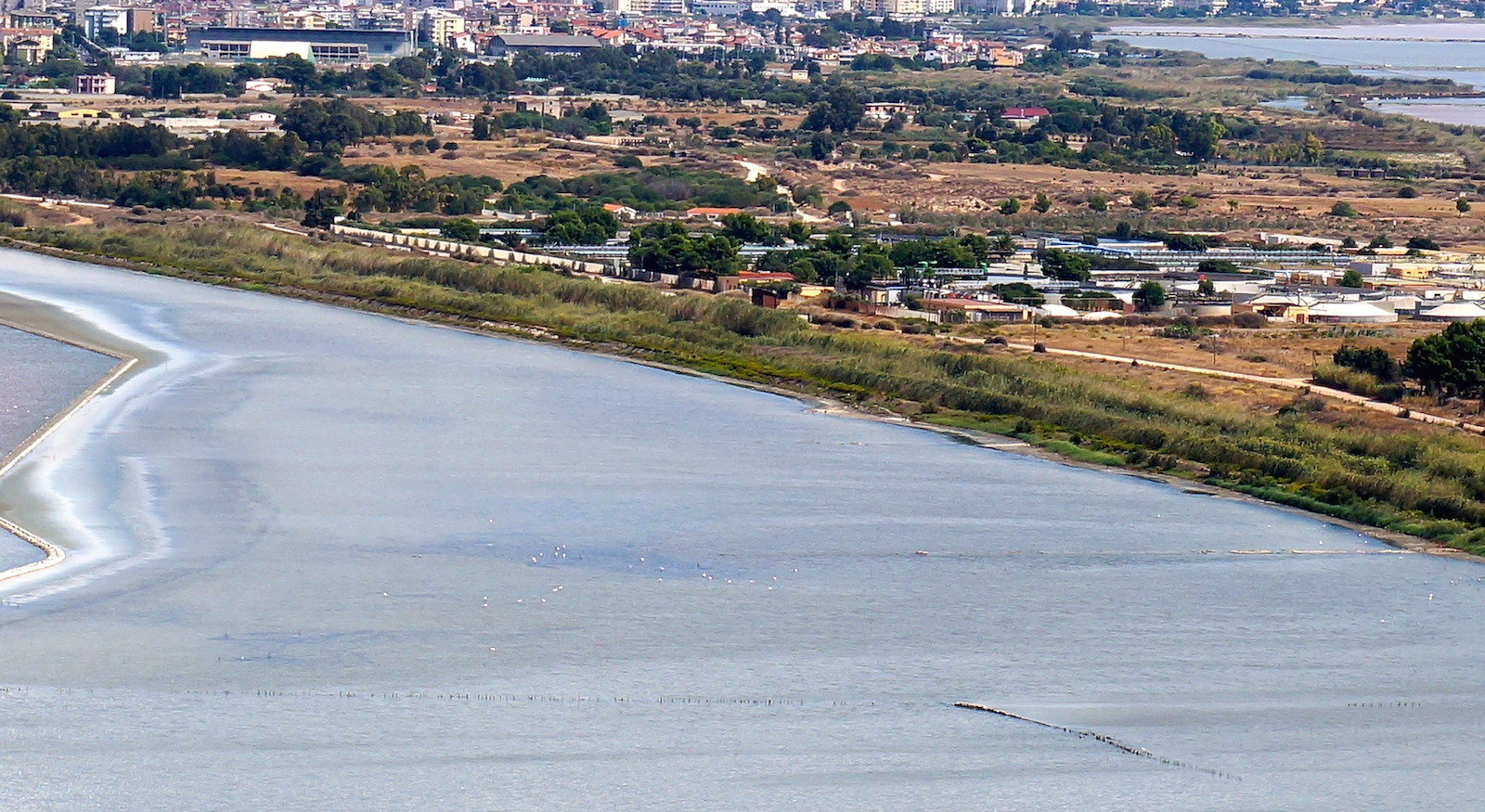 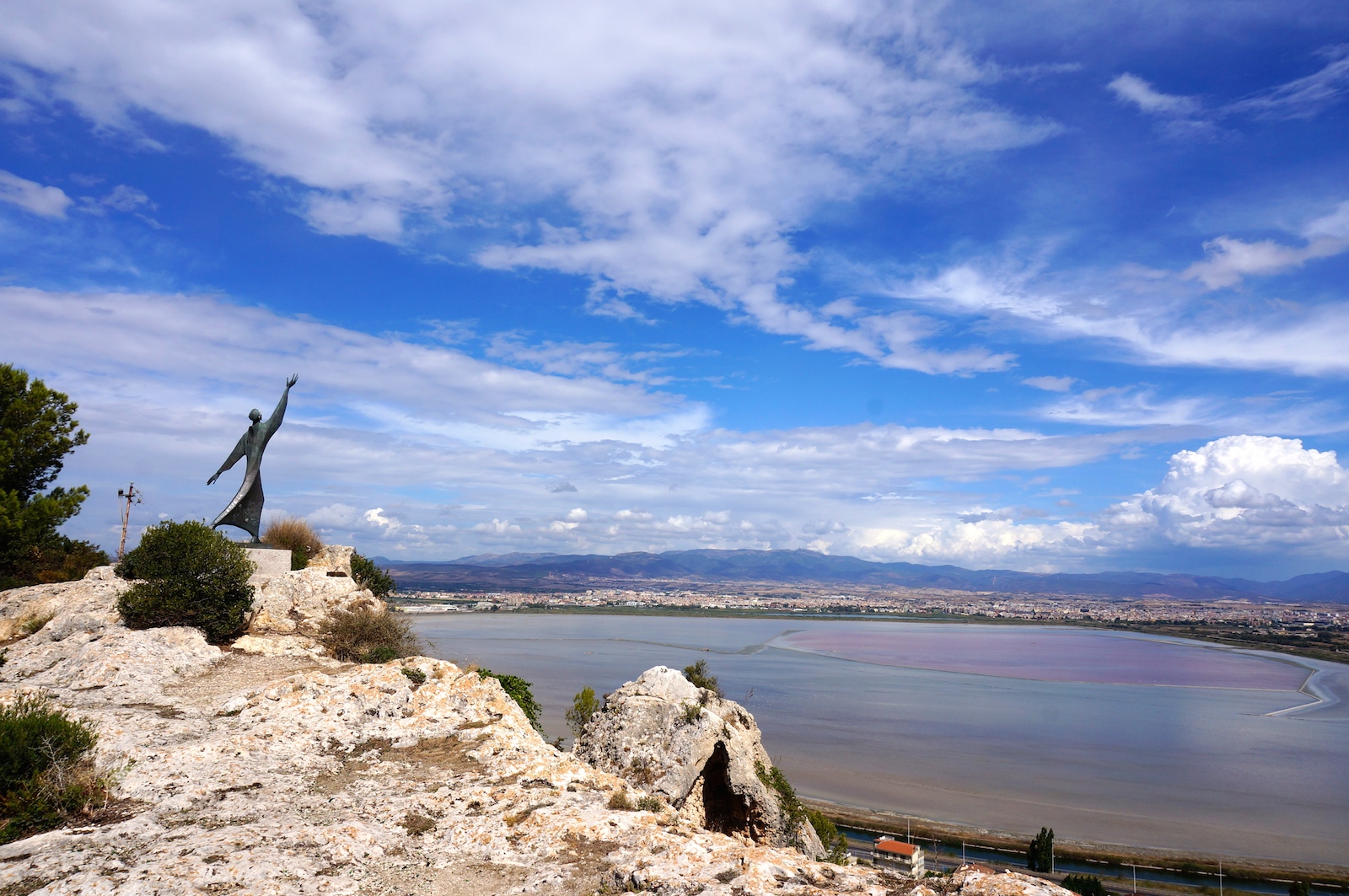 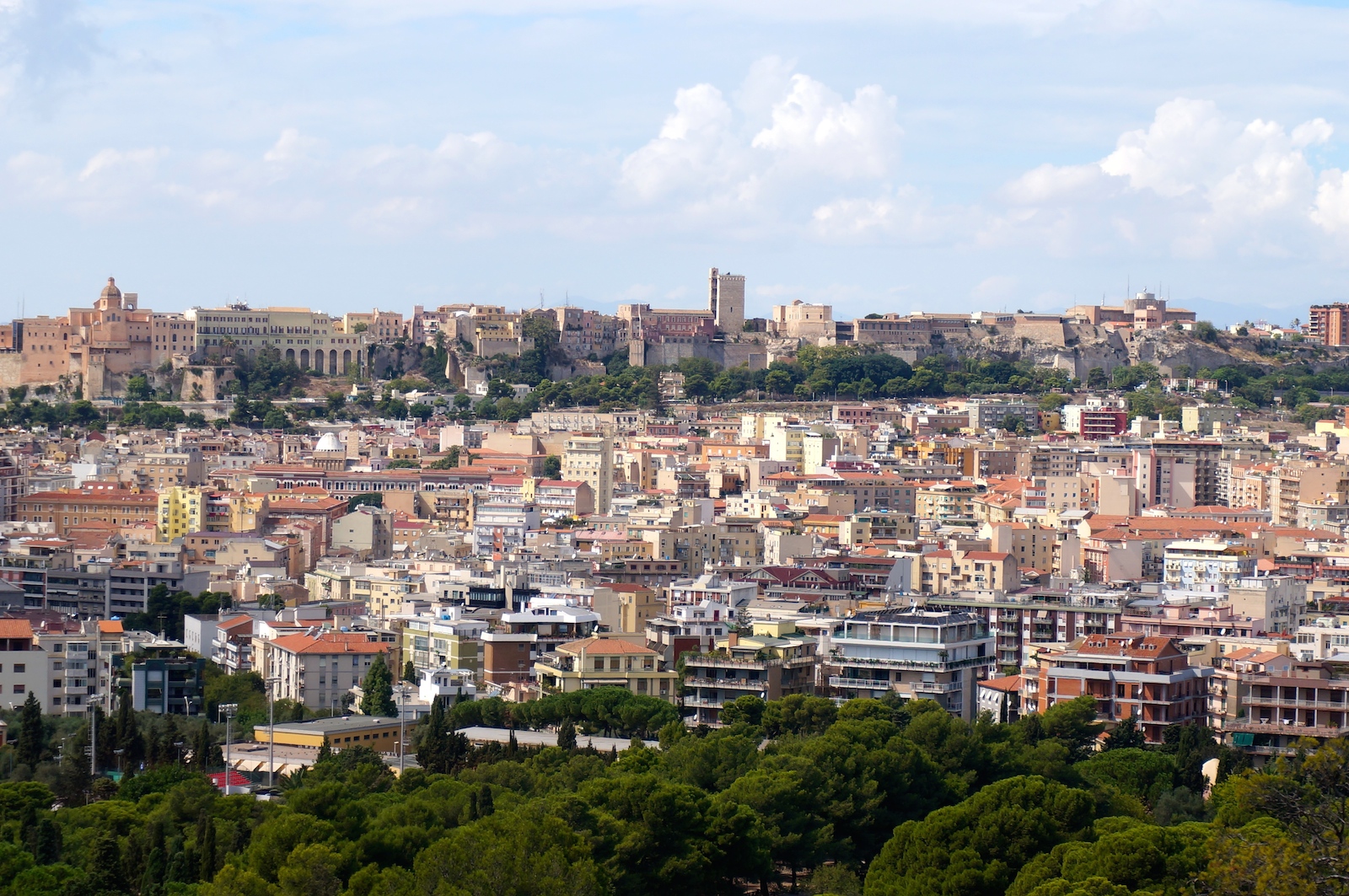 From there we wandered back into town. We climbed up the Bastione Saint Remy, a historic rampart. 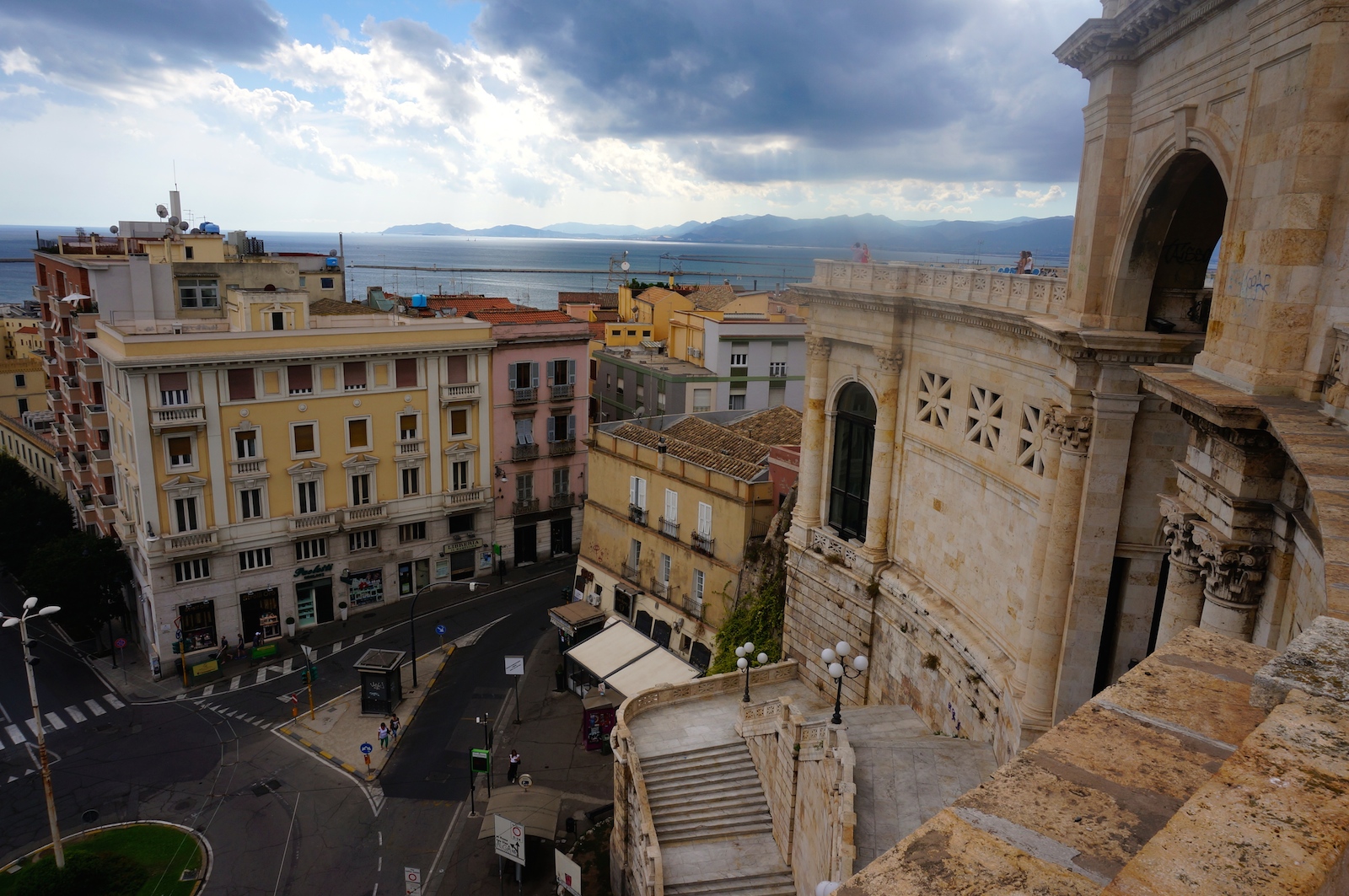 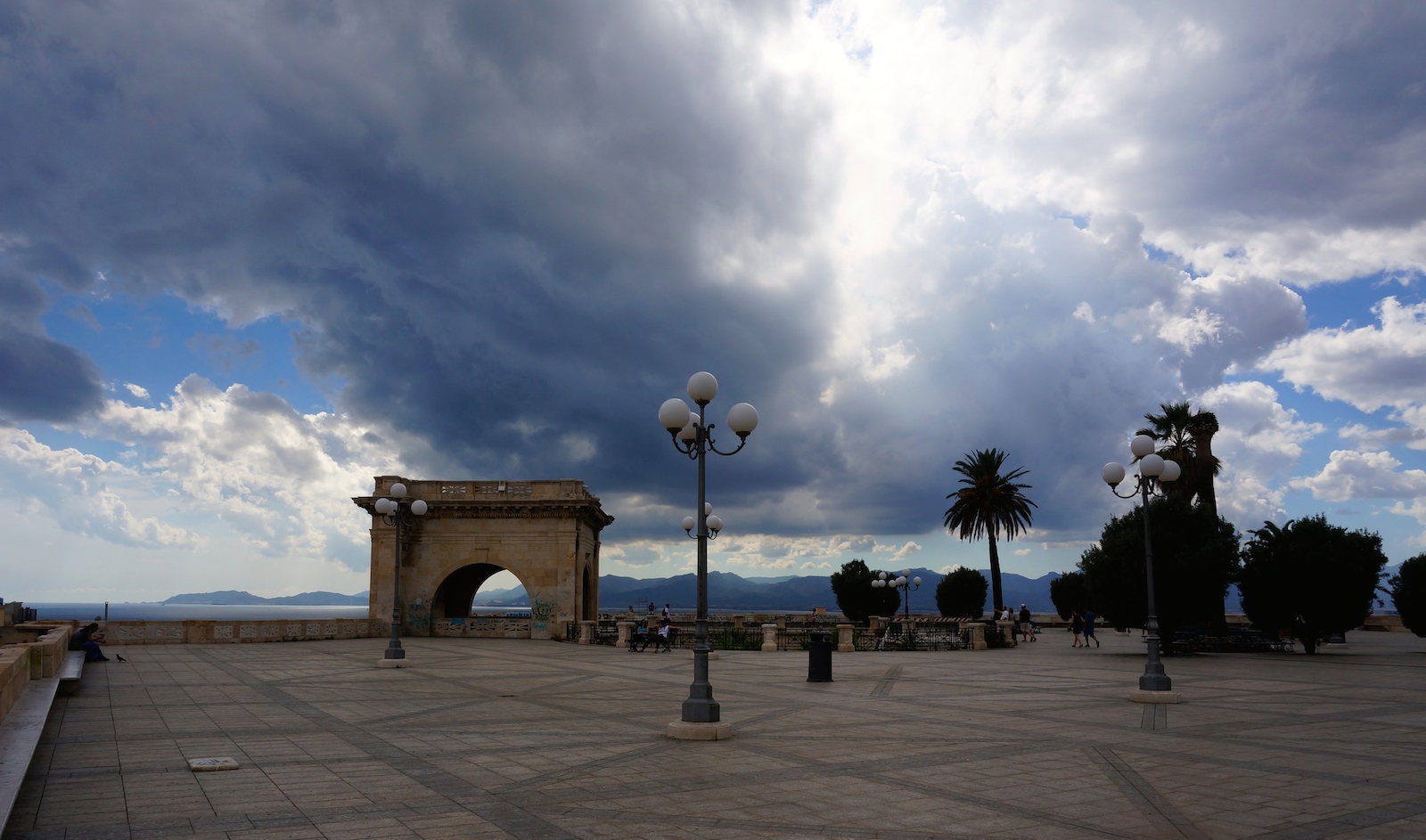 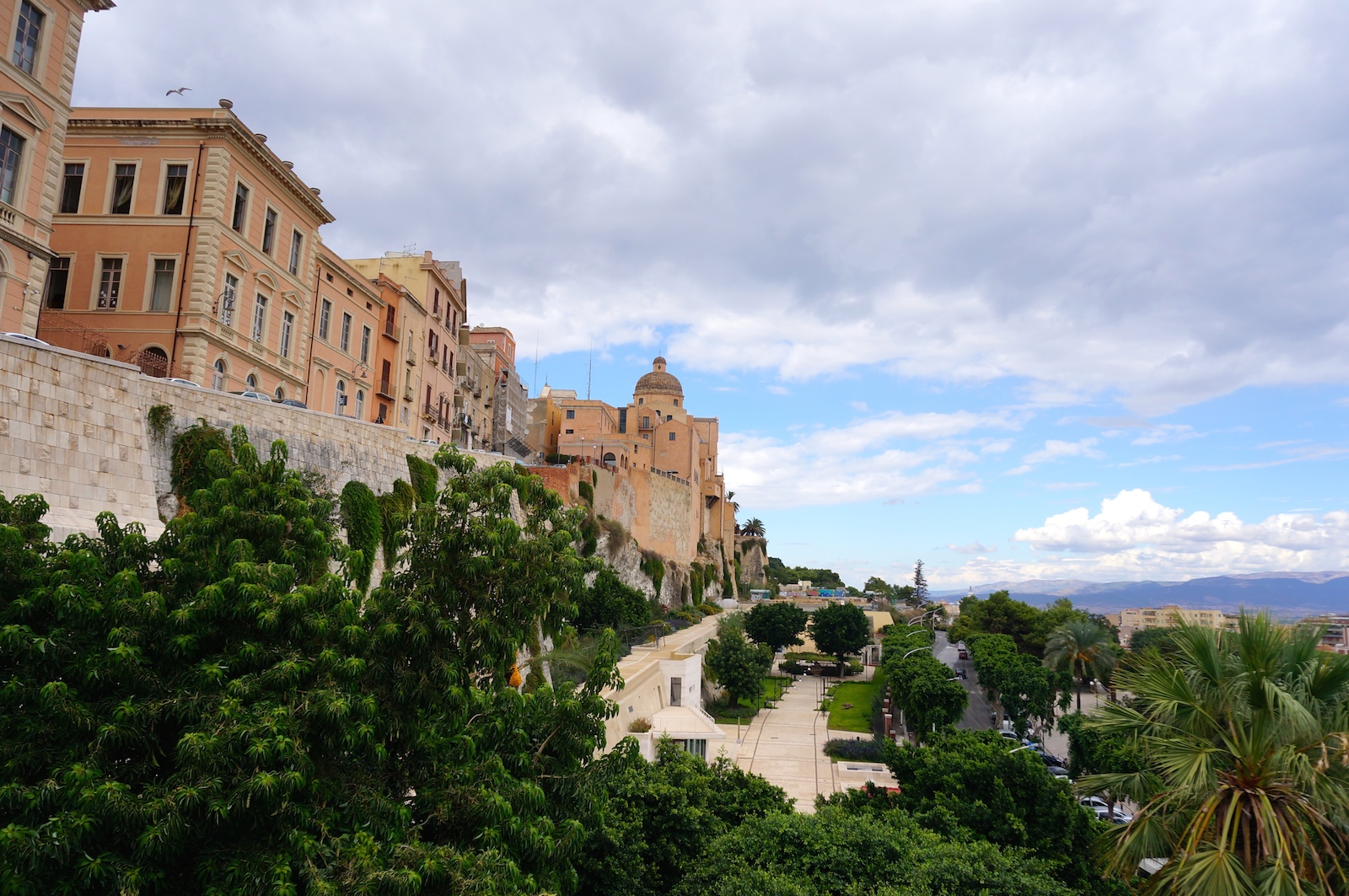 Had an amazing lunch before heading back via the supermarket. Tomorrow we’ll set sail again.