Time always seems to be against us and the huge distance down the Spanish and the Portuguese coastline was still ahead before we could reach the Med. We had hoped to be in Gibraltar by June but that wasn’t looking likely at the pace we were going so we decided to up the tempo and have a few day hops.

It’s hard though, you want to stay in all these wonderful places and explore (we could spend a week in each of them) but we don’t have the money to do so. The time we’ve allocated to this trip isn’t really set in stone but it’s not ten years that’s for sure. At some point we need to head back to work to pay it all off.

We keep bumbling into people who’ve been out cruising for ten or fifteen years and while it’s always great to hear their stories and get their advice we aren’t doing the same thing. Comments like “why are you rushing?” or… “You should head back north, you’ve missed some of the best bits!” really don’t help us but I never have the heart to explain that we’re not retired and living off a nice fat pension.

So… with that in mind we needed to press on and hammer away at the miles. We left A Coruña (which was hard as we loved it) and headed south.

The distances between the ports we’d chosen were quite long for day hops. This meant early mornings, long days, and late arrivals.

First up was Camarinas. We had a good sail down the coast, but needed to motor the afternoon due to the wind dropping which we always hate. 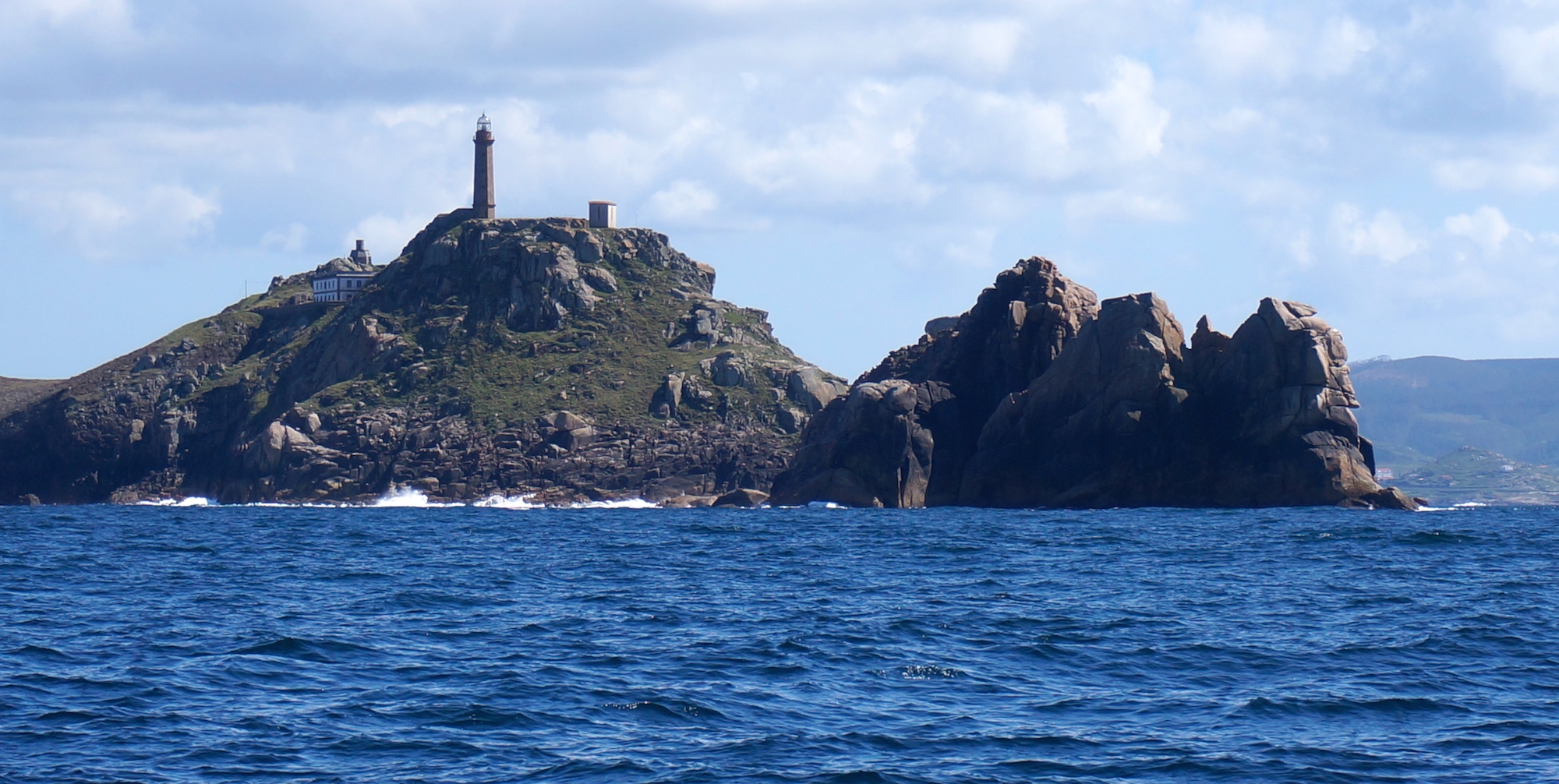 We followed a Swedish yacht who also left A Coruña the same morning. It’s great watching them on AIS as you get a good feel for how they enter a marina and it’s a good sanity check if your route closely follows someone else.

Anyhow we noticed they hadn’t gone into the marina but were anchoring. Great idea! Save a bit of cash, no hassle docking that evening or the next morning. We hadn’t really found anywhere to anchor up until now so really loved pulling into the bay and dropping the hook. 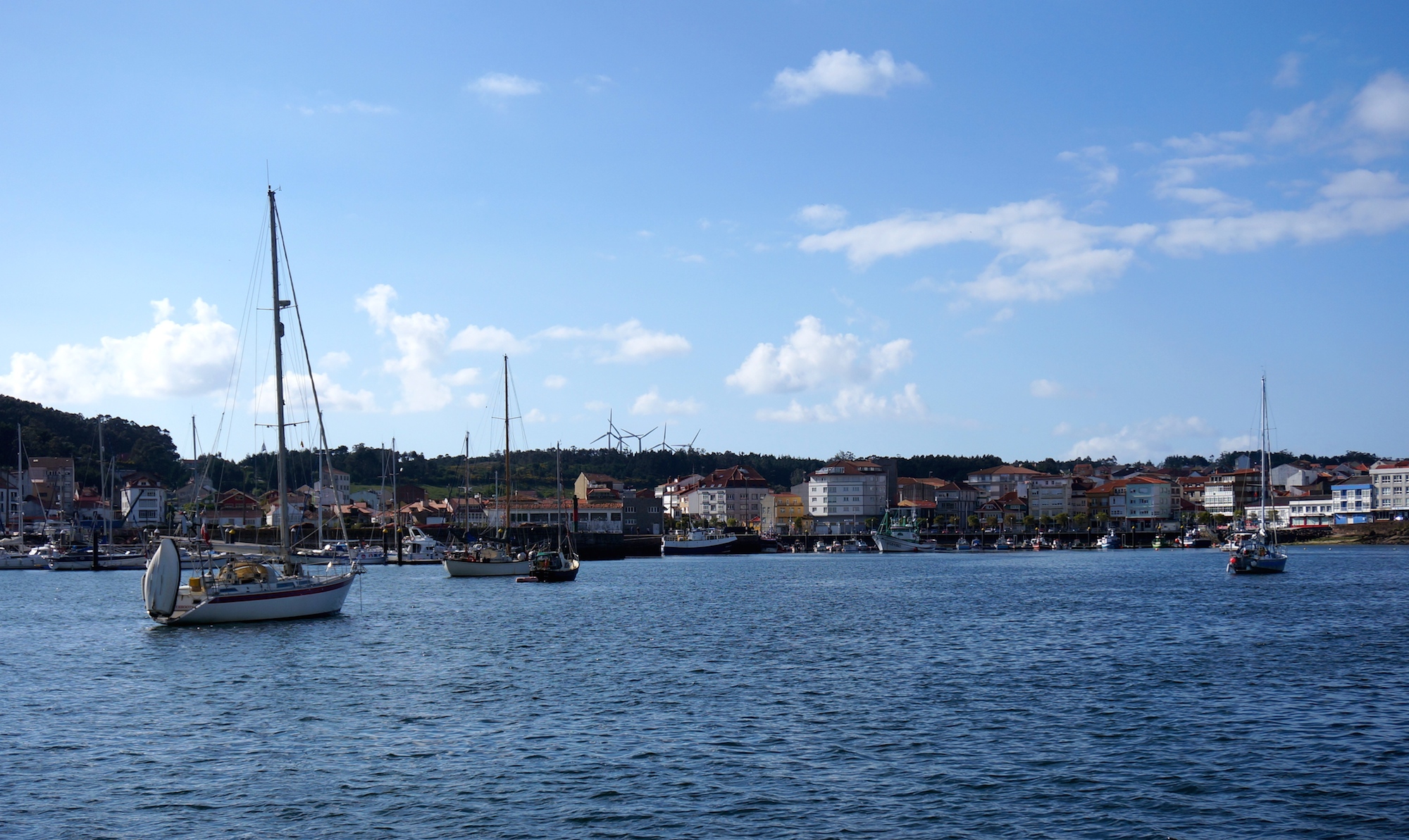 A lot of people worry about the anchor holding and seem to have a lot of hassle getting it to set but we followed the advice we’d learn’t in Sydney on our courses and luckily had no issues. The feeling of gently swinging around in the wind, away from everyone really is something we both loved. We had a great night people watching on deck and looking at the A+ views over a few cold beers and some dinner we knocked up. The next morning we had to be up at day break for the long hop down to the Ceis Islands near Vego. I’d read a few less-than-positive things about Vego so the small islands of Ceis sounded a far better prospect. It was a tiring day, and we didn’t get to the island until just before sunset, but wow was it worth it! We had the whole anchorge ourselves with an amazing view. 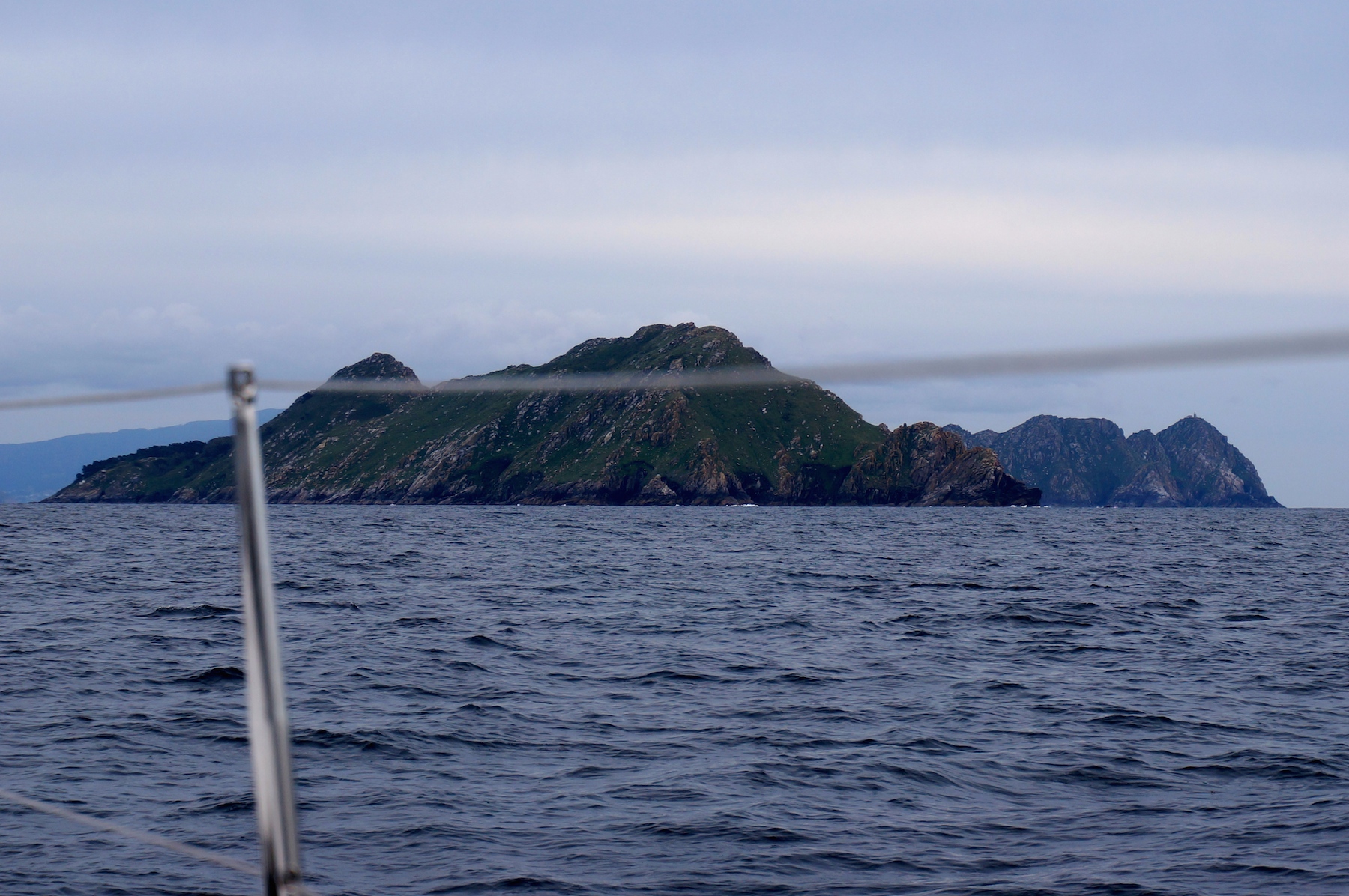 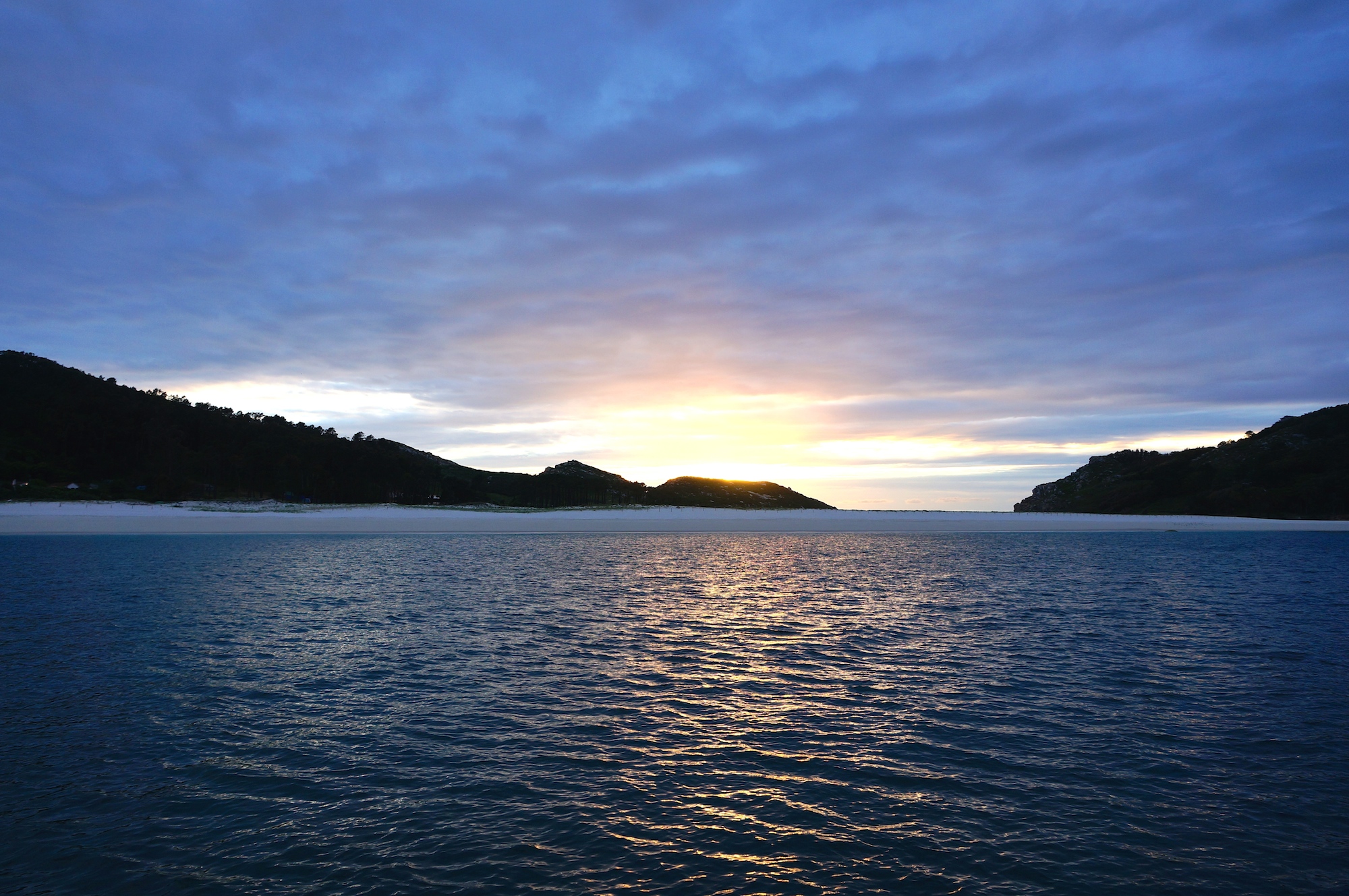 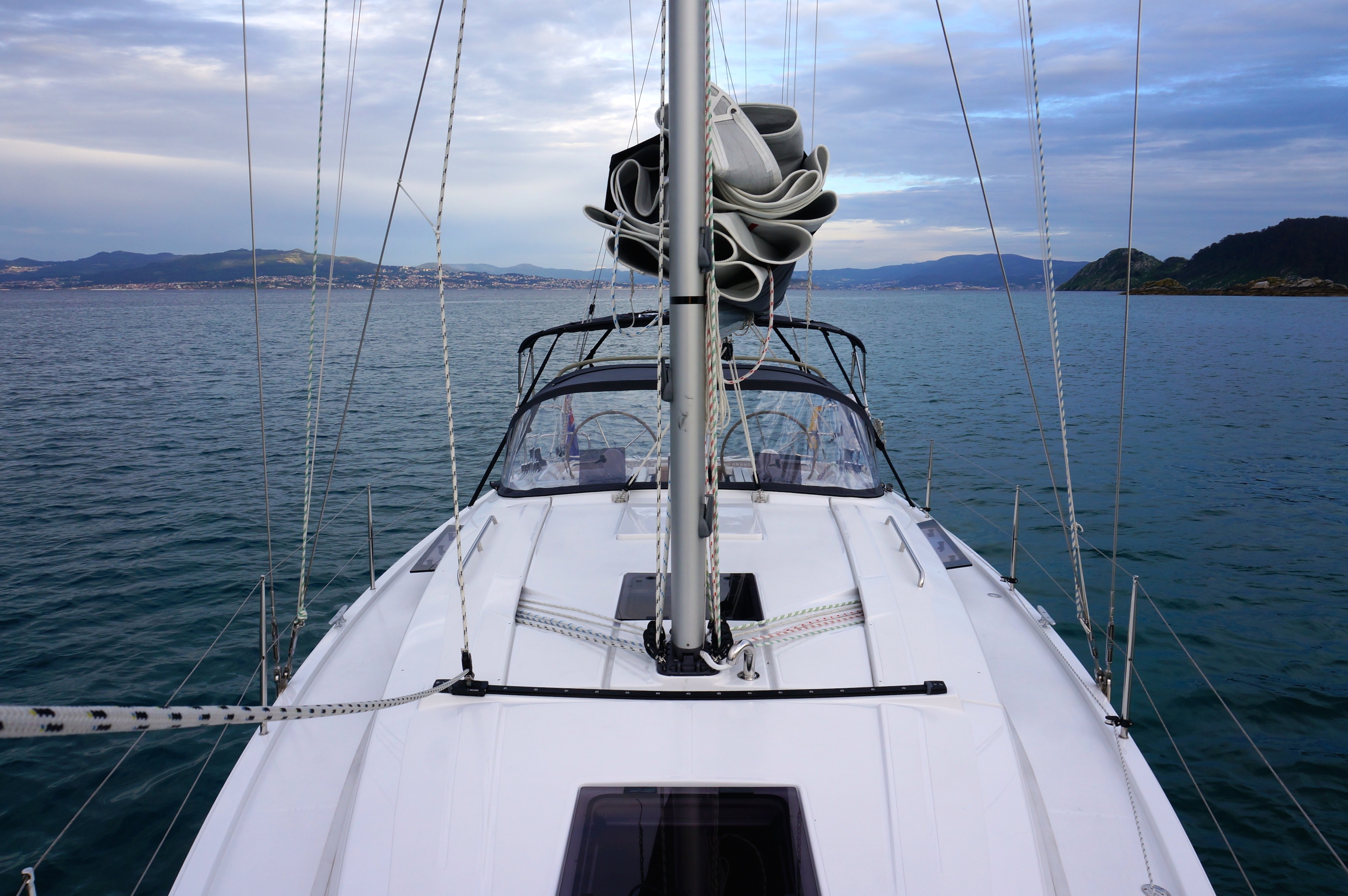 Just as we were heading to bed around 10ish Spanish customs decided to turn up. They were really friendly though and kept saying how they all watched the Australian show ‘Border Control’ but couldn’t work out why everything was so full on there. They seemed to prefer their far more relaxed methods and liked avoiding paperwork whenever possible.

Next morning we only had a short hop over to Baiona so could have a relaxed breakfast looking out over our anchorage. The sun was shining and the beach looked far too inviting for Helen who decided she wanted to swim over. Having tested the water (which I didn’t think felt too bad) she went for a wetsuit. I thought she was just being a bit of a girl about the whole thing so dived in after her just wearing my shorts.

The water might have been quite mild on the surface but was freezing when in and totally took my breath away. We aimed for the beach, which now seemed about ten times further away than from the swim platform. I was getting seriously cold, probably colder than I ever have been in water so after 3-4mins, and getting about 1/3 of the way, we turned back (who’s the girl now right?). Maybe we’ll save the swimming until we’re in the warmth of the Med. We had a two-night stop in Baiona, which was more than enough. It’s a nice enough little town but you can do it in one night really. We just wanted a break from day sailing and needed a few runs to the supermarket to restock. There’s a lovely old town area with lots of small bars though,  which also do the spanish trick of giving you free tapas with every drink. Love the food in Spain! 🙂 The marinas are quite expensive also and seem to pride themselves on this. Ours had more of a sense of high end yacht club about it, even though the facilities were quite dated and while the restaurant had great reviews it always seemed empty.

We would have anchored but, as our Hanse 385 only came with 30m of chain, the anchorage was a little too deep for us. Another 30m of chain added to the never ending ‘need to buy’ list. For our second night we got a tip for a new restaurant that had just opened a little way out of town called Nova Aires. We turned up around 9.30ish to find it empty, but thought what the hell and went in anyway. The next three hours were spent eating some of the best food we’ve had in Spain and chatting with the new owners who are getting things ready for when high season hits. The chef really did impress us and they are a lovely couple, check it out if you’re in the area!

Our first day in A Coruña was pretty relaxed.  All of the stresses, bruises (so many that you never noticed happening while onboard?!) of crossing Biscay all started coming out. We were tired, physically and mentally, so we just pottered about the beautiful town getting our bearings and chilling out before heading back for an early night.

The next few days were spent exploring the town and beaches which we both found we loved. There were so many cool places to head out to in the evening but our favourite area was the old town. Hundred’s of small bars and restaurants of every type with good vibes. To our surprise every time we got a drink a few small dishes of tapas turned up for free. As we were bar hopping (to see as much of the place as we could of course) this meant by the end of the night we were stuffed full of amazing little treats and didn’t pay a penny for food. The bars all have a lot of pride in their offerings so go all out to impress and impressed we were.

We learn’t this happens during the week but not at weekends but it really does make nights out interesting as you get to try so many dishes you normally wouldn’t.

I’m sure the idea is you’re meant to get the tapas and then stay in their bar – sorry to the many bar owners whose food we ate and then headed off to the next sucker, I mean bar. 😉

The town during the day somewhat followed the French style of everything being shut when we wanted it open. Basically from what we could tell nothing really opens until about 8pm, then all the shops, bars, etc, light up and the dead streets of the day explode into busy, bustling, lane ways full of life.

No one eats until about 10pm (at the earliest). Bars and restaurants stay open until people go home. Everyone seems happy, no one gets silly drunk, just a really friendly town full of people hanging out having fun.

There are lots of touristy attractions as well, which we normally don’t really go for, but a trip up the worlds oldest lighthouse, dating back to roman times, was a must. The views from the top (don’t go on a windy day as you can’t go outside) are breathtaking. Looking out over the ocean it really brought it home that we’d just crossed that mass of water to the North. Looking west we could see where we’d be heading once a weather window opened to get us safely around the tip of Spain which can have nasty swell and sudden storms trapping people and halting their passage south. We had a few days of this ourselves, arhh well… just another night of great bars and free tapas then!