From Castlesardo we made our way to Baia di Reparata, a useful anchorage that provided good protection given the weather conditions. Our main aim was to get to Bonifacio (Corsica), but when we contacted the marina they said ‘No bookings’ so you just have to try your luck and get there early so Baia di Reparata was a good stopping off point meaning we only had a 10 mile hop the next day.

The weather conditions looked like they were going to get hairy over the next few days so we were looking for a safe harbour. We got up early and made the short crossing, and we were glad we did. By the time we had reached the harbour the winds and swell had started to pick up.

The entrance to Bonifacio harbour is nothing short of spectacular with towering cliffs topped with colourful houses. 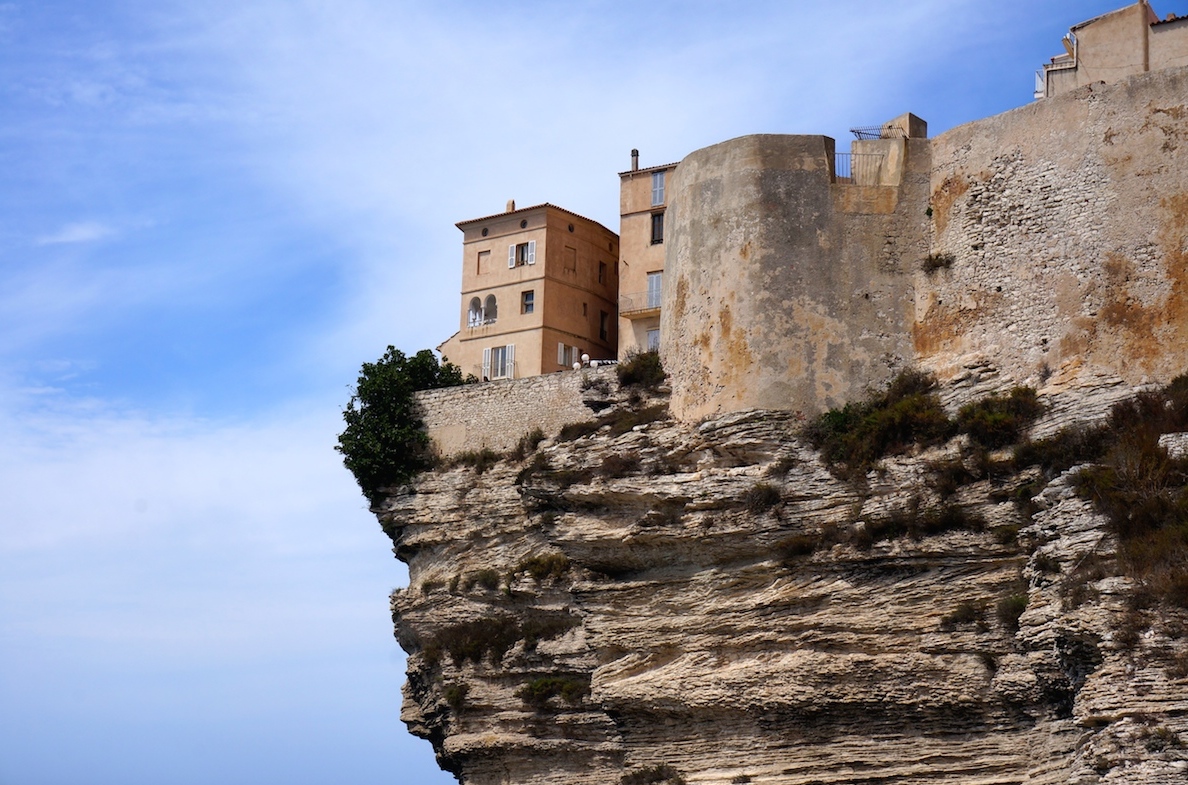 It provides good protection from the swell but even inside the winds were high. It’s a natural harbour in a narrow inlet – and we were not the only ones racing to get in or out. 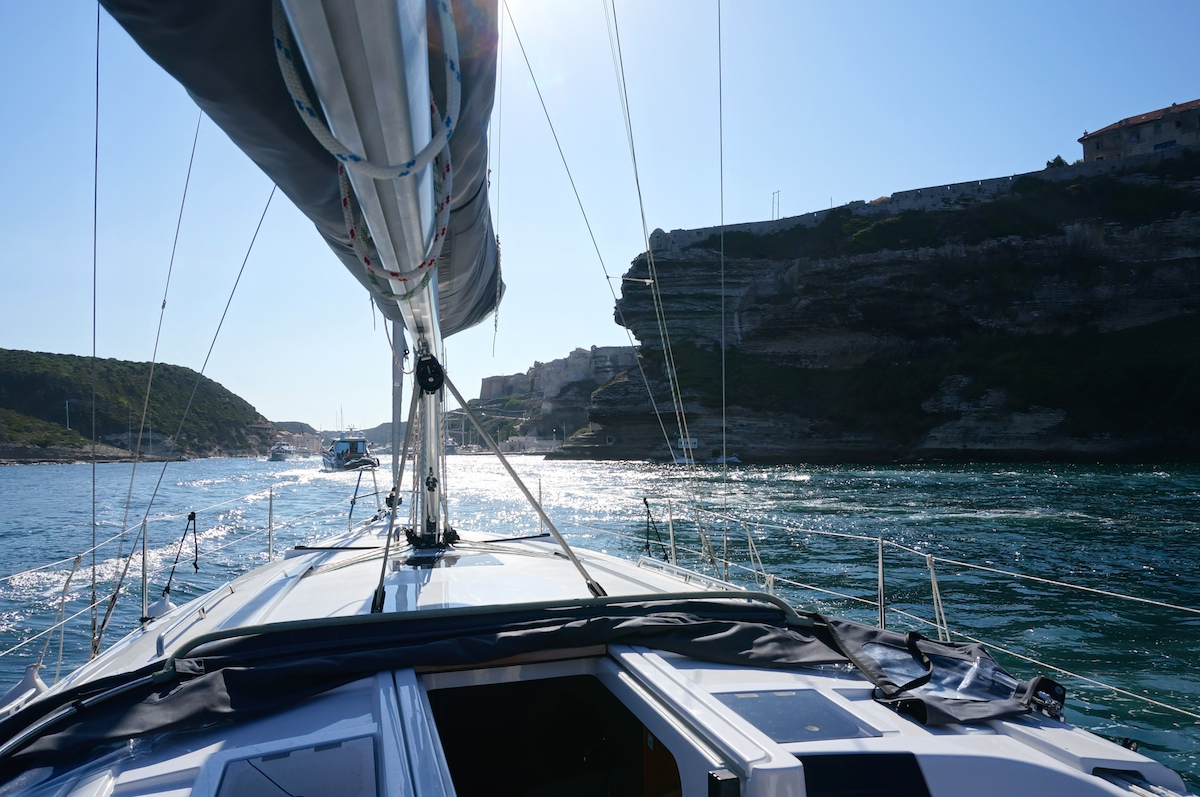 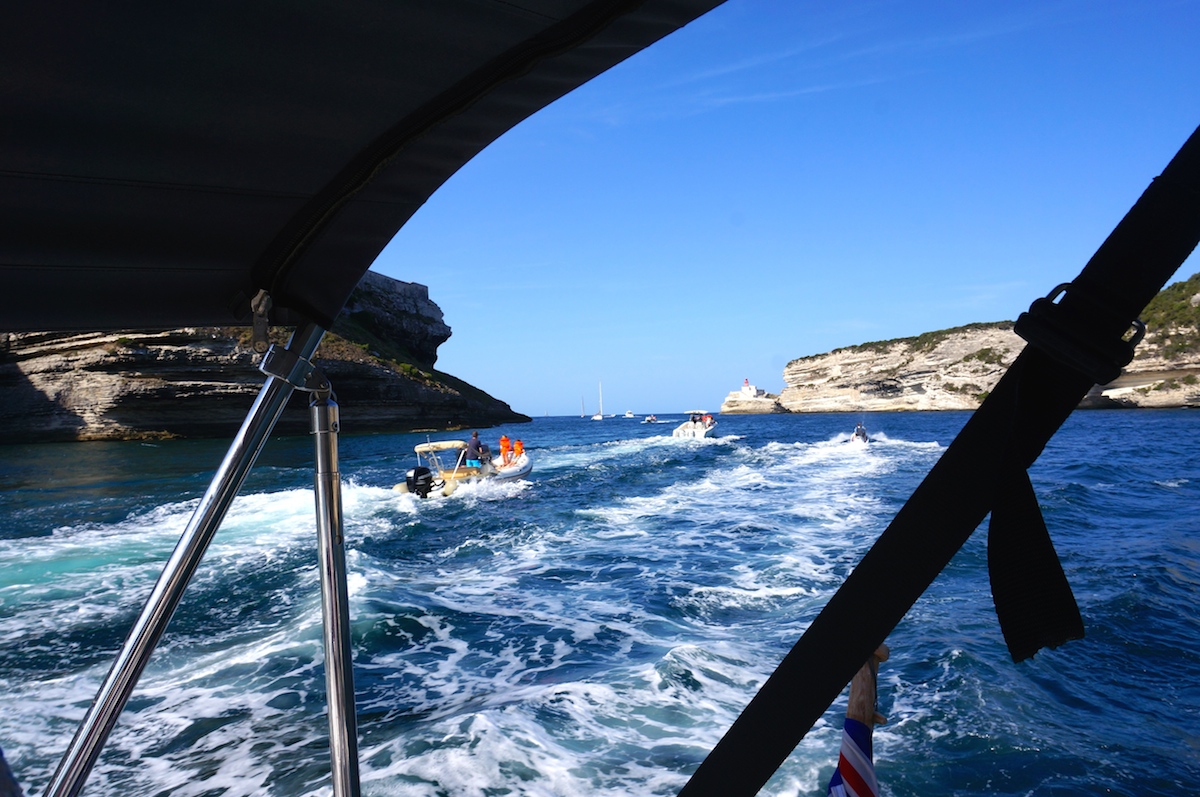 In fact it was bat-shit crazy with boats on every side, from mega yachts, motor boats, sailing vessels, dingys, you name it, and not enough room to swing a cat in (as the catamaran waiting at the fuel pontoon demonstrated).

We tried contacting the marina on the radio but to no avail so we decided to follow another friendly-looking yacht in and hope for the best (at least after Simon pulled a u-y right in front of a super yacht winning us a toot of the horn – good work!) Yes it was that kind of a place.

Once we passed the anchorage and the super yacht bay we got to the everyday pontoons. 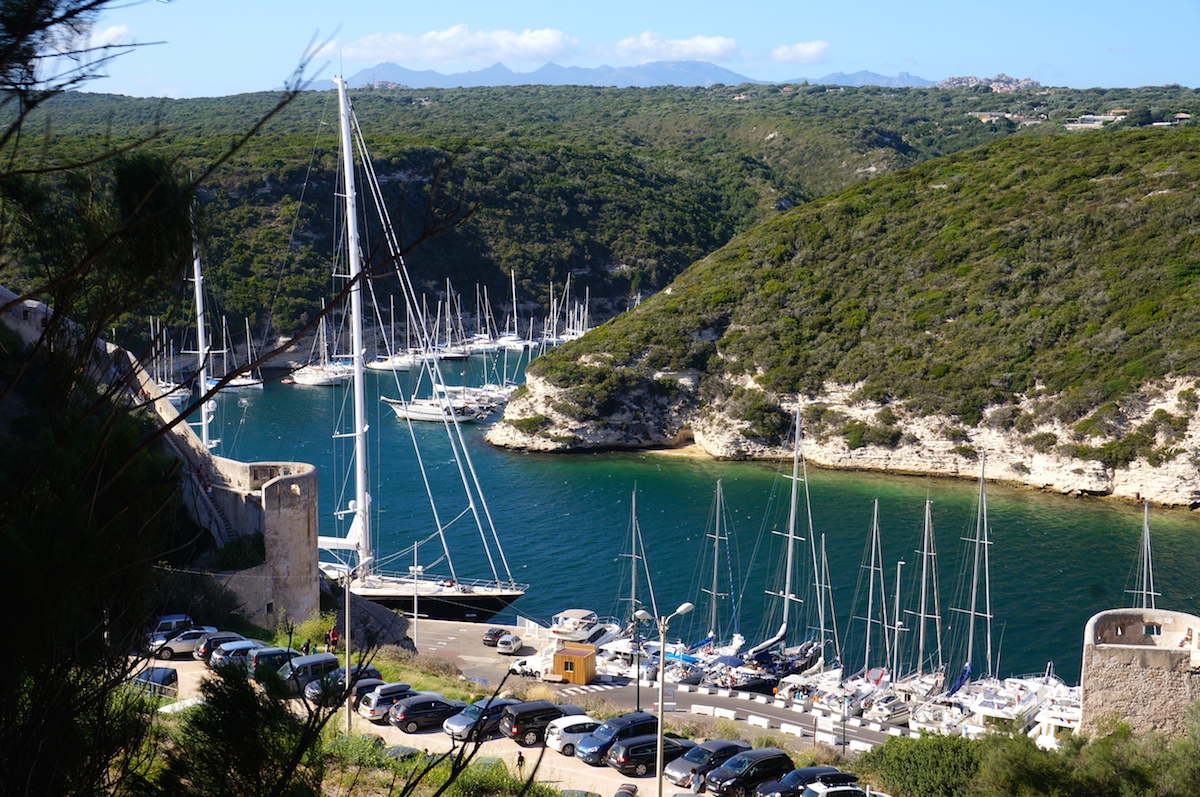 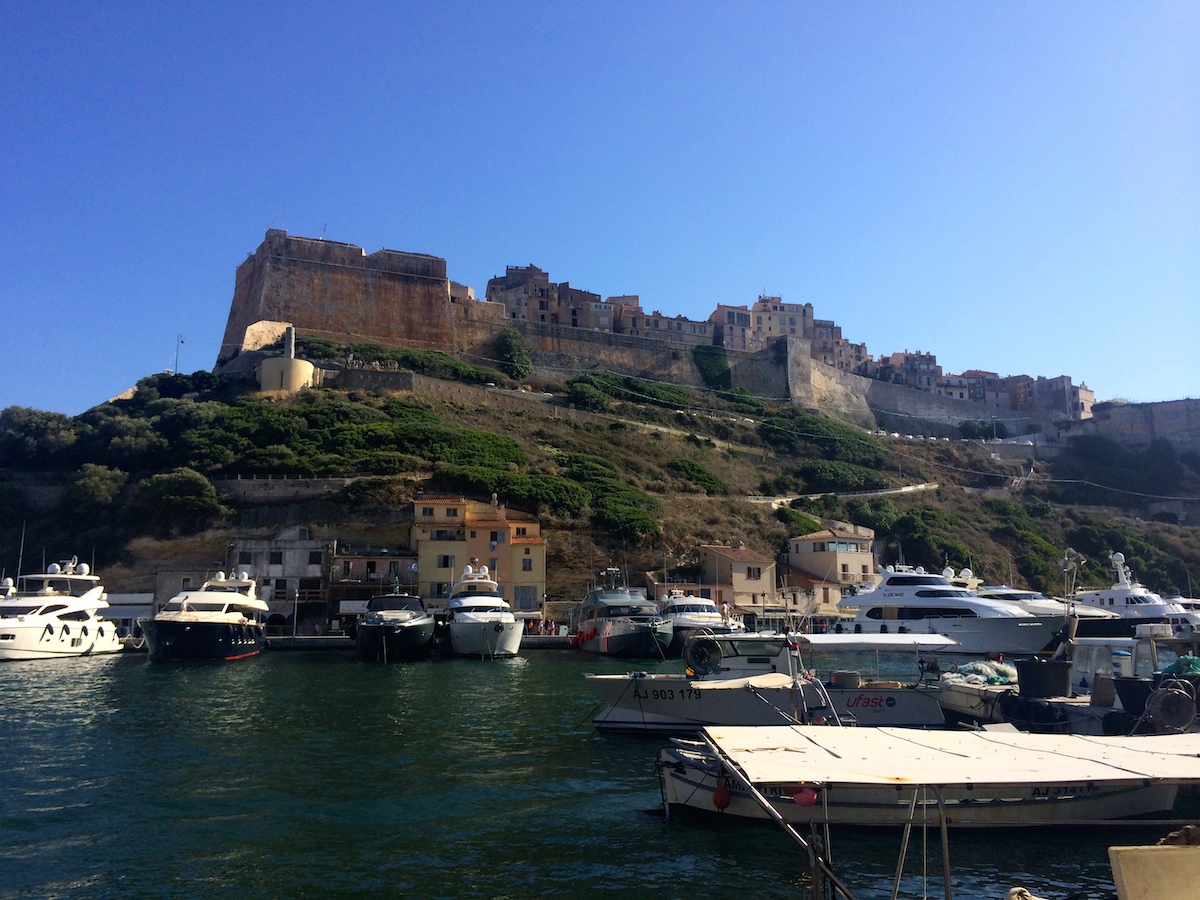 And like magic a team of marinaros arrived with their trusty tenders. The yacht in front got the first slot and we were directed into the next bay. This was the tightest spot yet! But this wasn’t the time or the place to argue. We searched for the opening between to power boats. 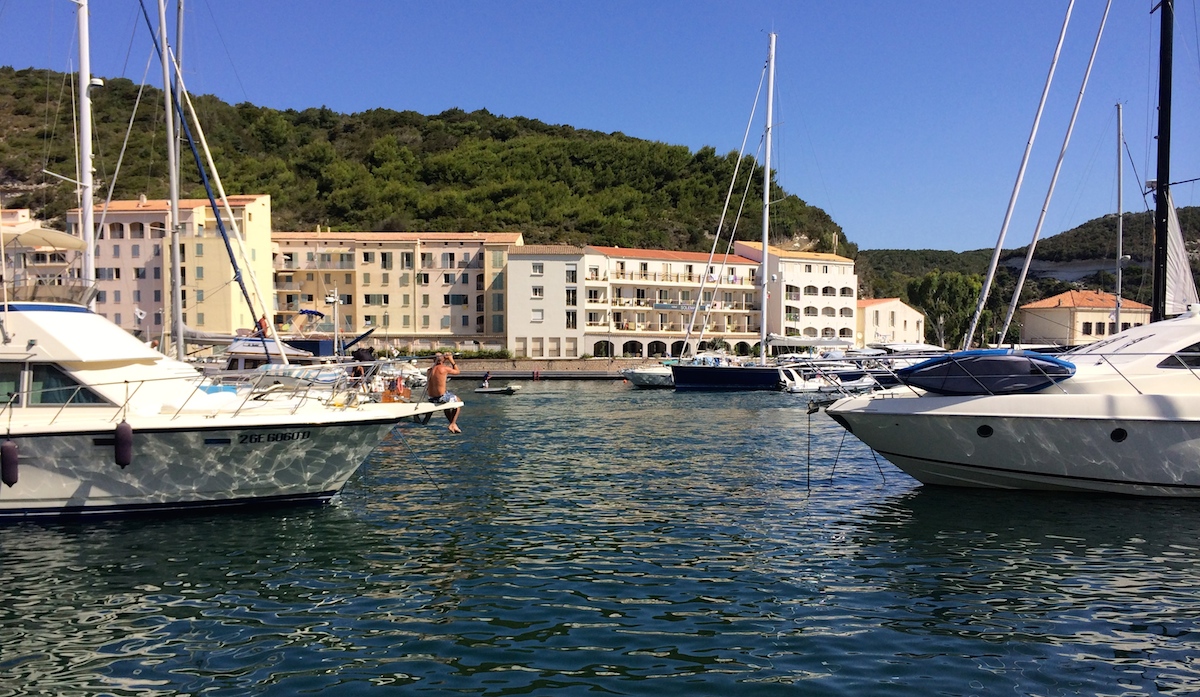 Anyway Captain Excellent worked his usual magic and jammed poor Interlude in the narrowest of berths with only the slightest bit of help from the equally magic marinaros. And a nice guy from the boat behind us helped us to tie up. We were settled and very relieved.

Then the real ‘meyhem’ began. The wind kicked up more (40+ knots) and every man and his boat came into the harbour searching shelter. A family sail boat berthed next to us in the recently vacated spot – sideways – until many hands were able to push and shove it into place. Then a huge power boat tanked it in next to him at a rate of knots, his son rushed to protect the stern from the concrete wall only to slip and fall off the back and under the boat. How he didn’t get mangled in the prop or squished between the dock and the boat I’m not sure but we were all pleased when he surfaced and was dragged back onboard albeit slightly wet and shaken.

Just when we had put away the boat hook and fender (there were no more free spots on out pontoon) we heard another hullabaloo and rushed upstairs to find a huge cat trying to moor up at the end of our tiny pontoon. The fendering and helming didn’t go too well and now they sadly have a large hole in their gel coat. This sparked a animated argument between the crew and the mariners which only ended when the harbour master was finally called out and the cat was eventually secured.

When that evening set in we all thanked our lucky stars that we were safely berthed. 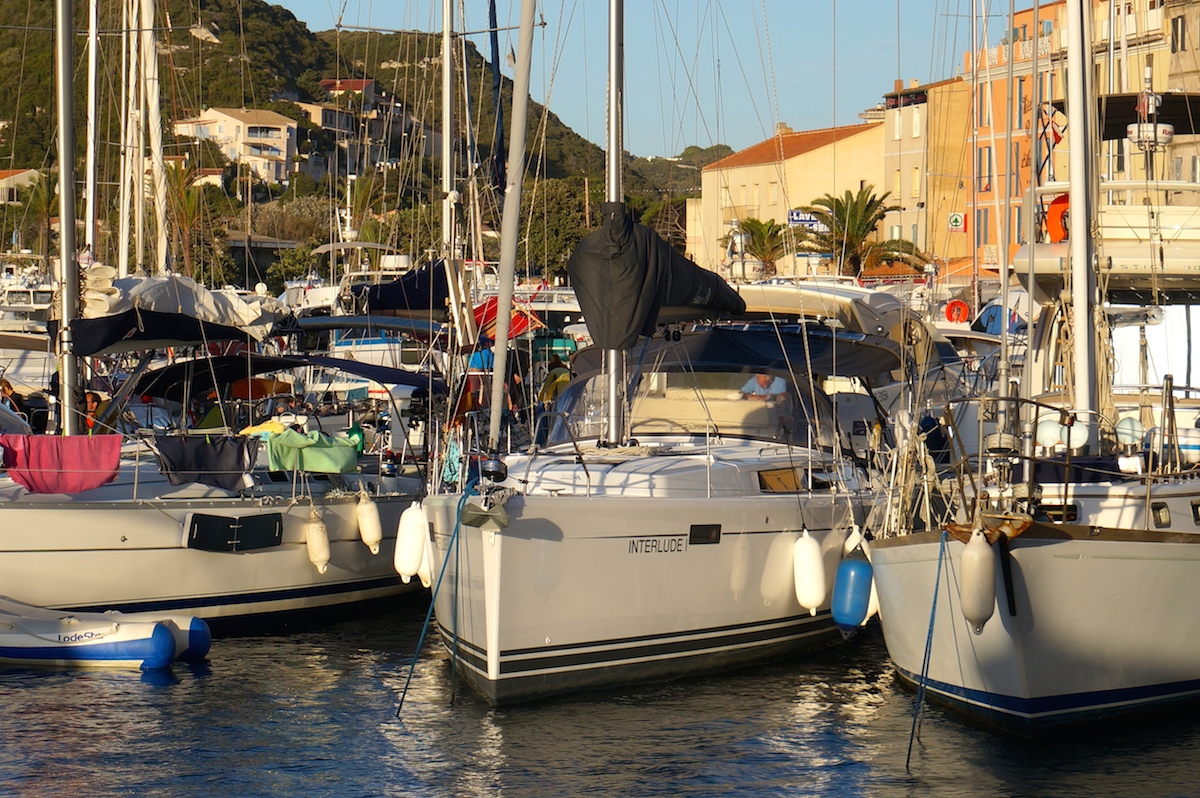 If you could choose a place to get stuck for a few days Bonifacio would be top of the list. It’s incredibly beautiful, the people are friendly and there’s always something to see or do. There’s a huge mixture of tourists here, from strutting mega-yacht owners, to cruisers like us, to busy crew members, chilled out holiday makers, laid-back back-packers and everything in between.

The next day we took a walk up to the historic citadel, not only a castle this time but a whole village to explore 🙂 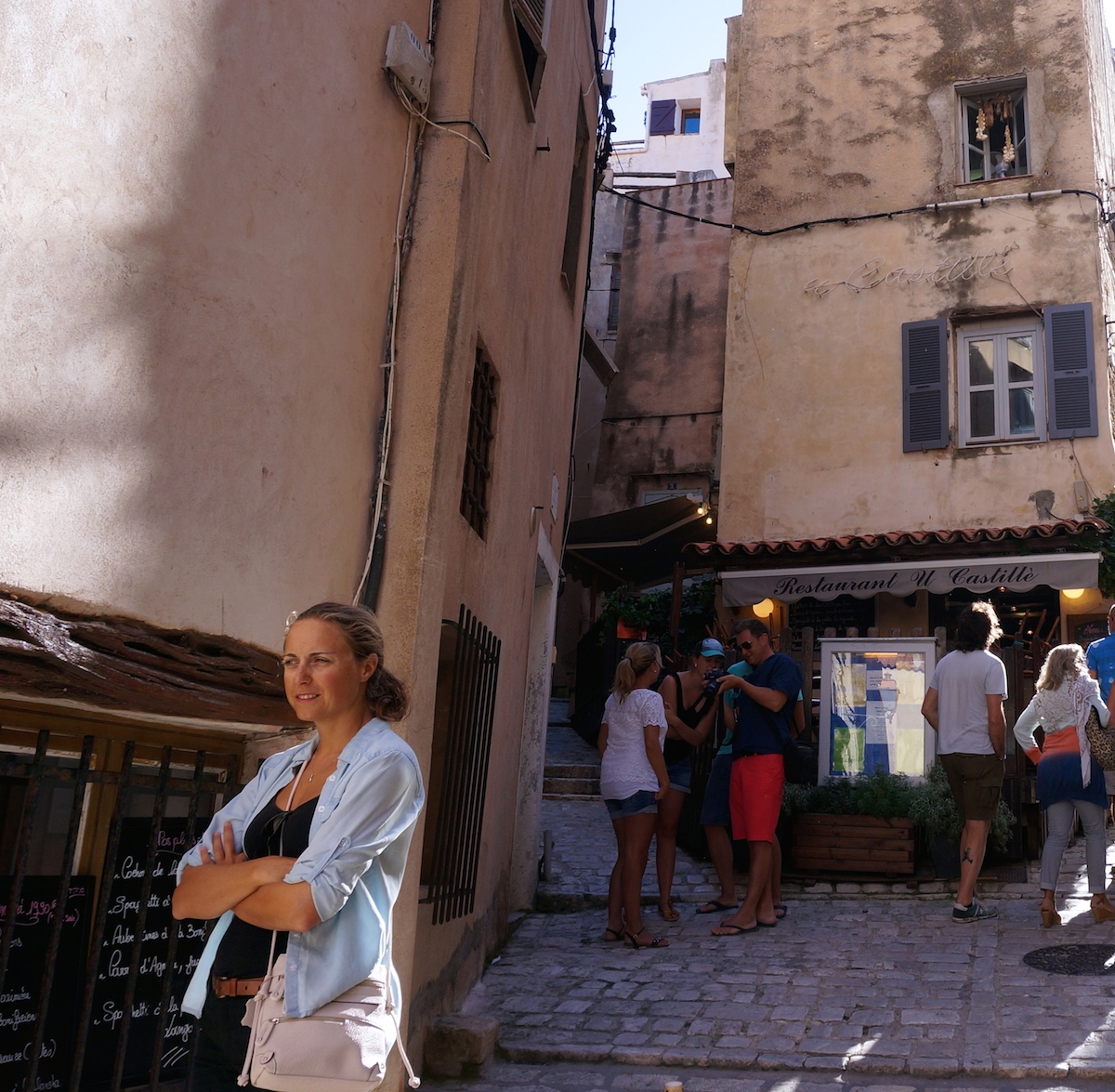 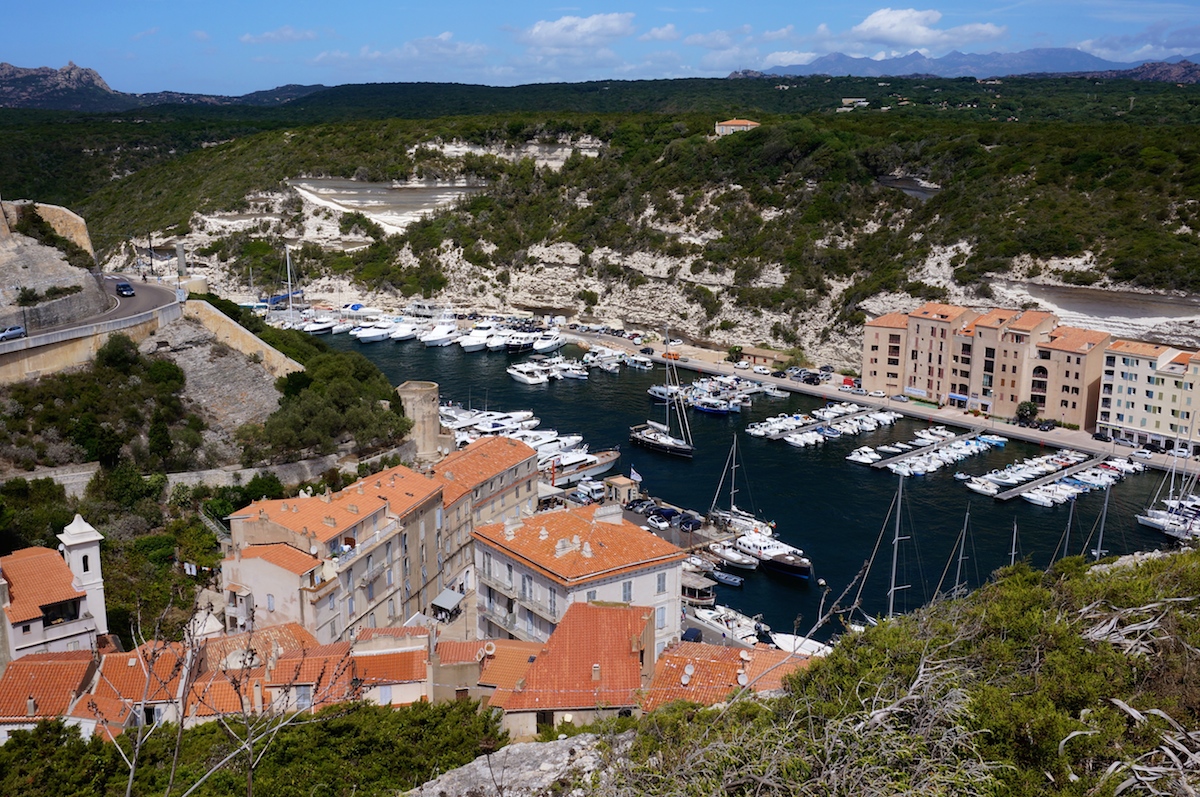 … or across the sea towards Sardinia. You could see for miles. Any doubts about staying tucked into the harbour were soon dismissed as the sea looked pretty fierce and only the brave or unfortunate were making any kind of voyage. 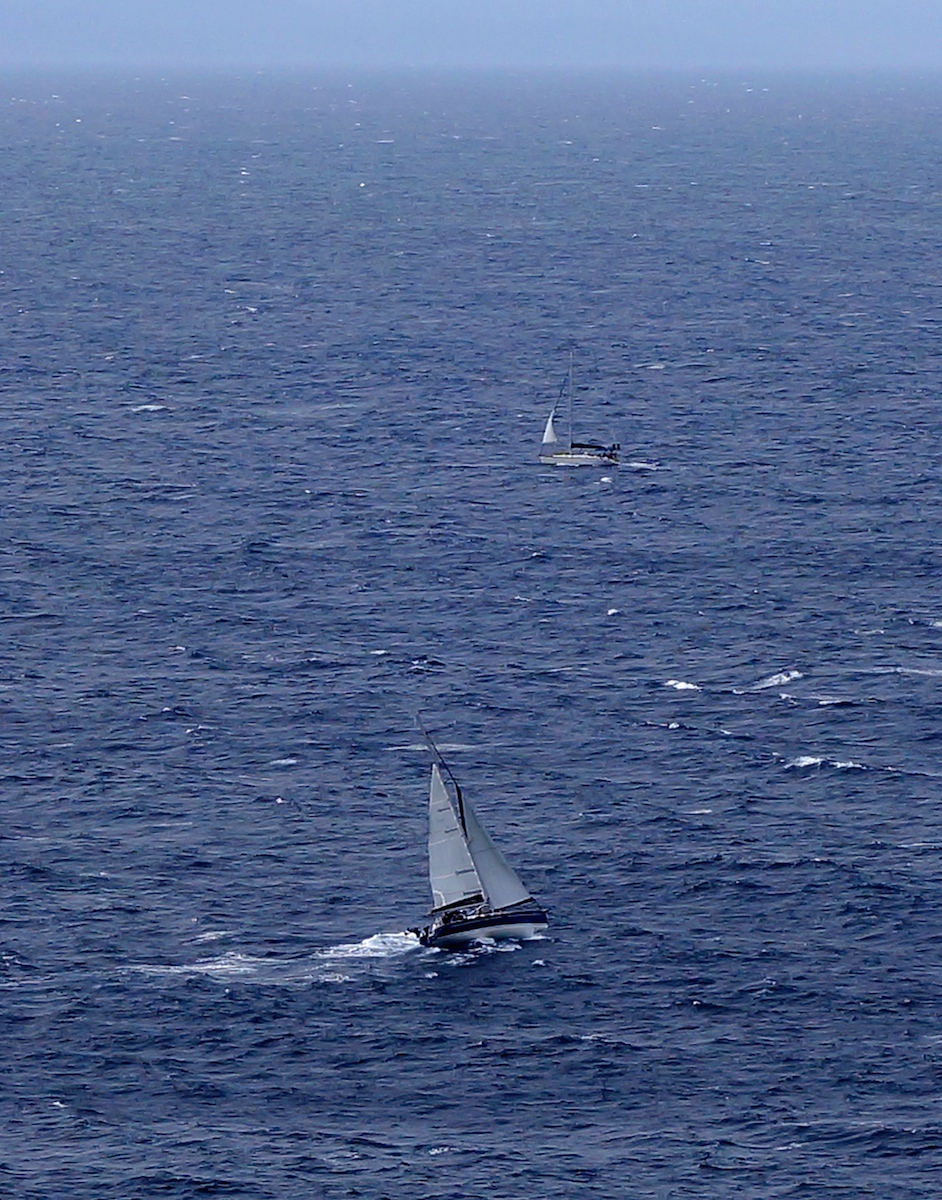 And those that did were having a pretty tough time, which could be seen on the sailor’s faces when they finally made it into the already crowded harbour.

Although the swimmers didn’t seem to notice. 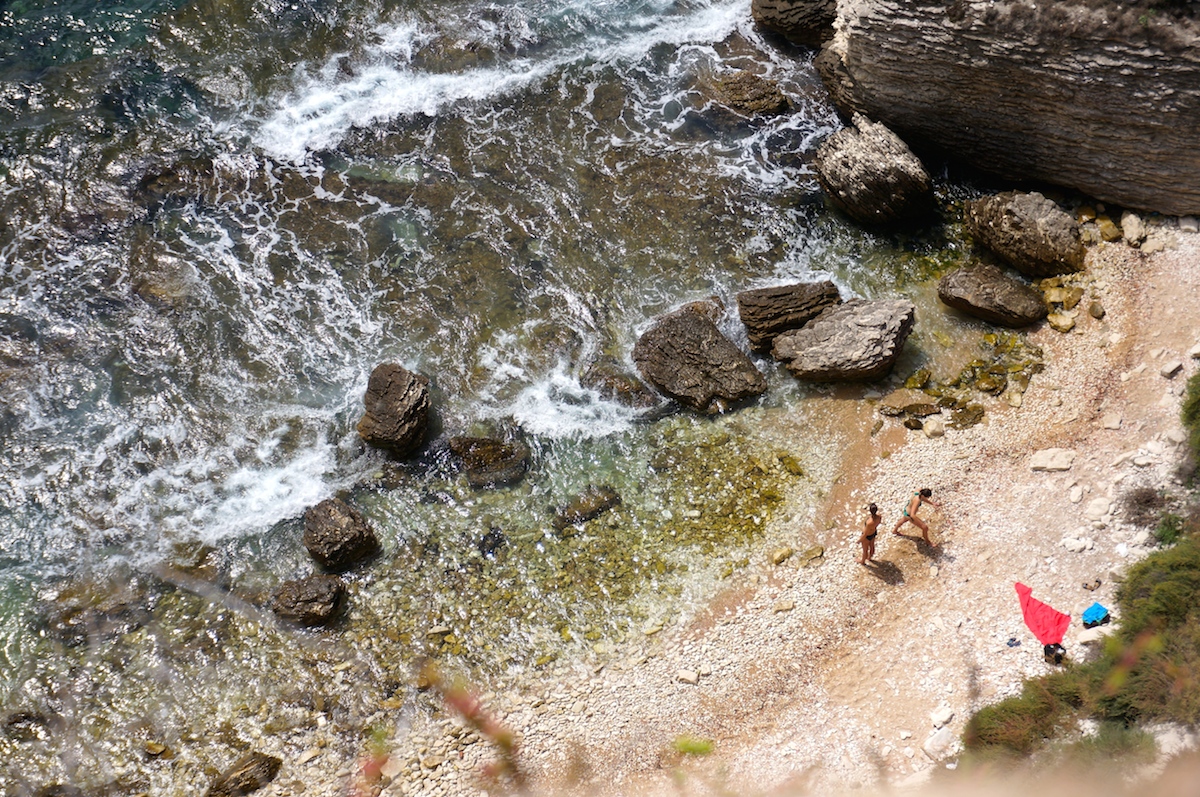 Another day we took a walk across the beautiful cliff tops, taking in the views and fresh air, and once again reminded ourselves that it was better to stay put for a little while as the winds were pretty strong. Not that we had to be persuaded – as this was one of our favourite places yet. 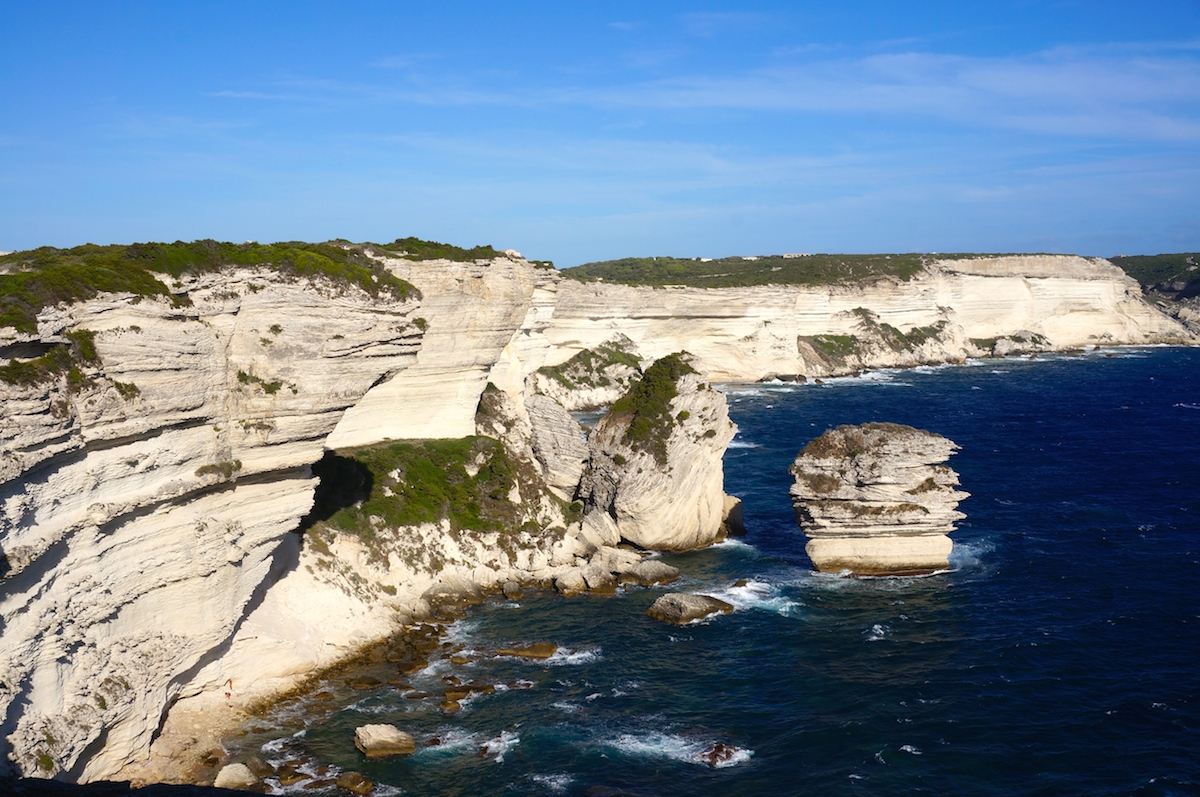 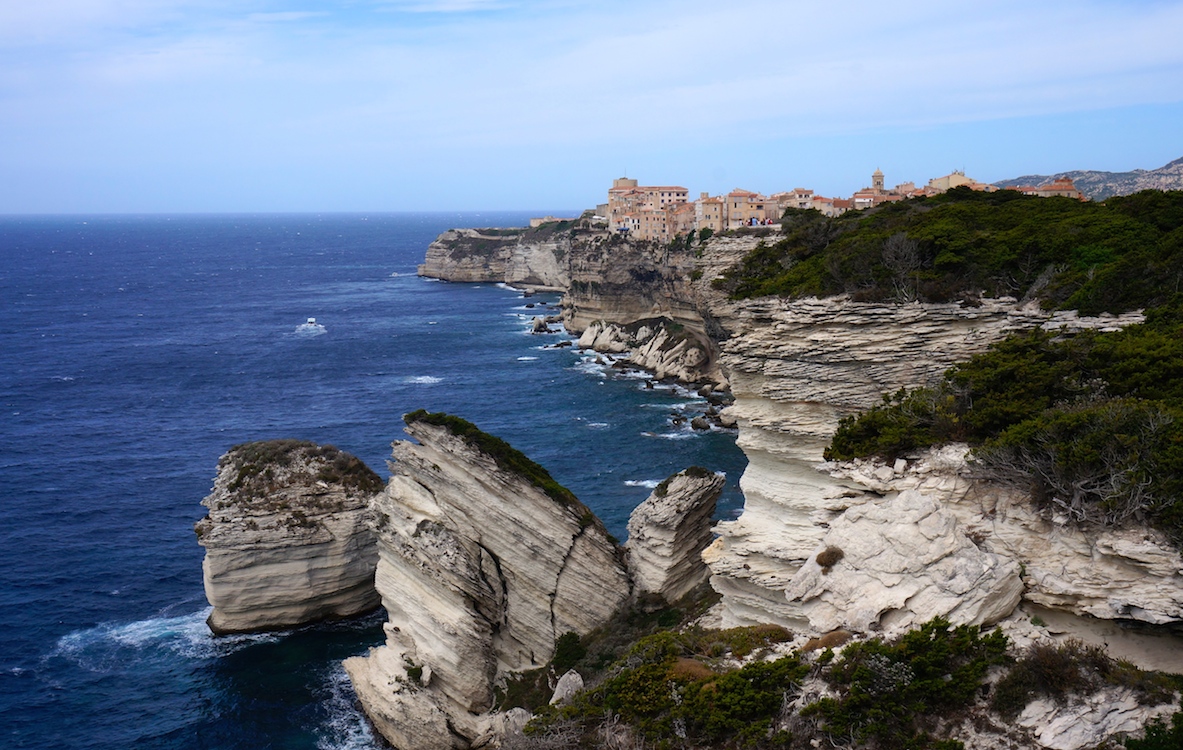 We were also spoilt with an amazing pizza, awesome burgers and surprisingly good sushi, not all on the same day 😉 The people on the dock were all friendly too and a German sail instructor gave us some top tips for the Maddelena Islands and beyond. They set off to make their way back to Italy and a few others left not long after, so we knew it was time to start planning our next trip.