Off again, but this time with the folks in tow. Simon’s mum and dad were joining us for the next leg of the trip so the pressure was on – not to impress them as such but with the aim to not scare them silly and keep them safe and sound.

So it was with some trepidation that we left the sunny and comfortable berth in Gibraltar, heading East into the Med! Our plan was to mix it up with some anchorages and marinas. First off, we were hoping to anchor at Estepona.

We headed out of Gibraltar – a busy port for a first trip. We were excited to see the late Steve Job’s super yacht motoring into the harbour – a masterpiece on the water.

Then it was past the airport to the fuel dock and back again. The flights in and out were constant and kept the boys amused, along with the big ships and tankers. What’s more, on the rock you could see the old hundred tonne guns capable of firing across the Straights to Africa!

As we rounded the corner of Gibraltar we found a pod of dolphins to the delight of the mums and dads onboard. With some great weather, the Gibraltar Straights were certainly putting on a good show! Some nice downwind sailing too, or at least for the morning.

The afternoon brought big winds and before we knew it we were putting a reef in. We flew down the coast to Estepona and by the time we arrived it was 23 knots, nothing like the weather the gribs predicted. We checked out the anchorage but it was swelly and unprotected so we headed into the marina in the hope of some shelter. No luck there either so we did a few donuts hoping the wind would drop down to the predicted 5-10 knots. After 15 minutes we decided to call the marina and head onto the reception pontoon/fuel berth. It took a while to convince the staff but finally they let us stay there – at least for the night.

Not much to see or do here but at least we were safe and got some shut eye before heading on the next day.

In the morning we decided to continue our journey East to Fuengirola. Again nice gentle winds until we neared our destination, then it picked up again. We feel like they’re always against us – GRRRRR!

We’d read that we could anchor near the beach outside the marina but when we turned up there were bouys strung across the beach and there were pedalows galore the other side. We found a spot close to the entrance of the marina – maybe a bit too close – so we stopped there and worried all night that some party boat or crazy fisherman would plough us down in the night.

We got the dingy out and enjoyed some takeaway from one of the many touristy English cafe’s near the beach. Another couple of yachts came, including Nurse-It of course, so we weren’t alone in our search for the anchorage. 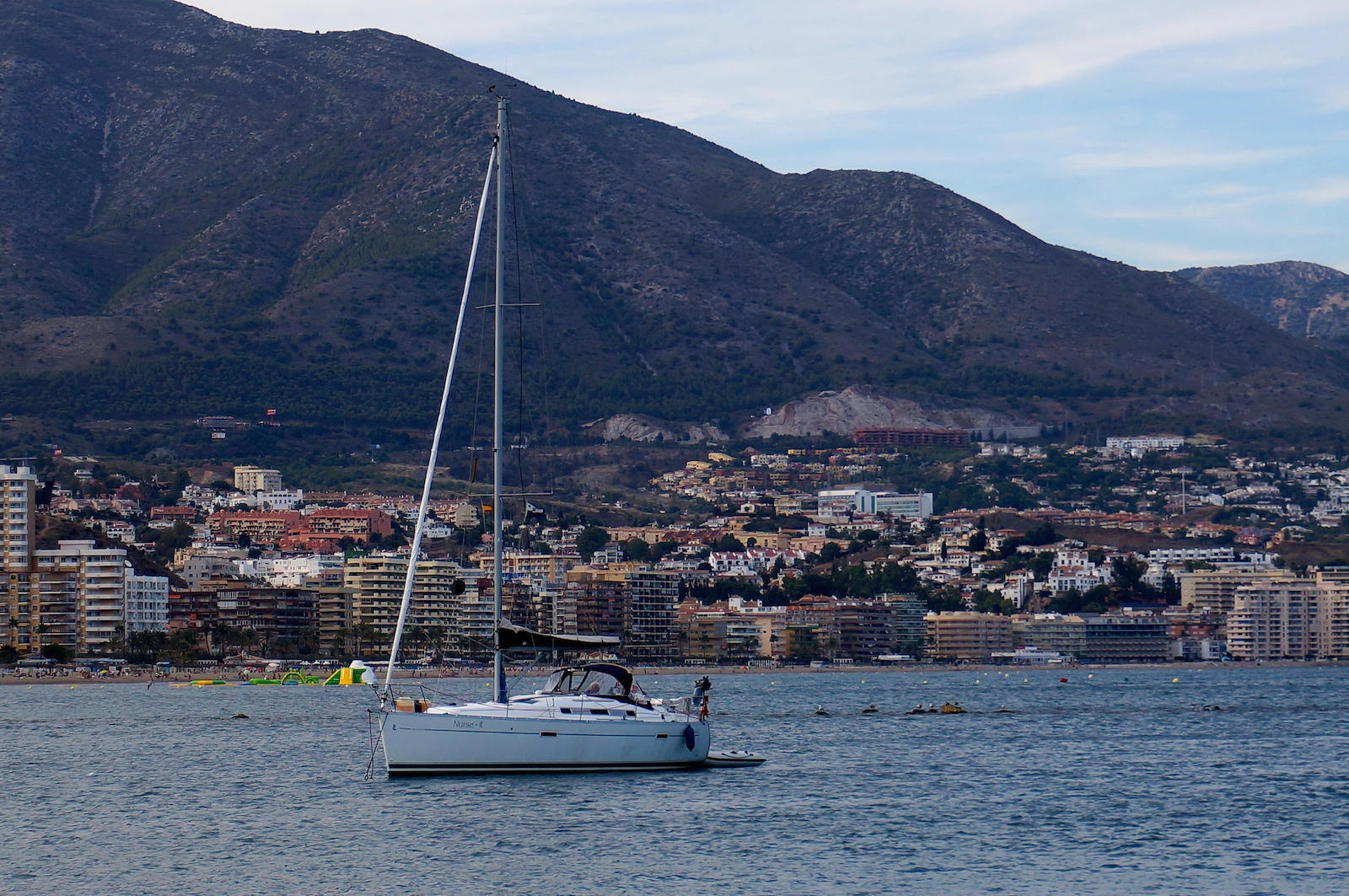 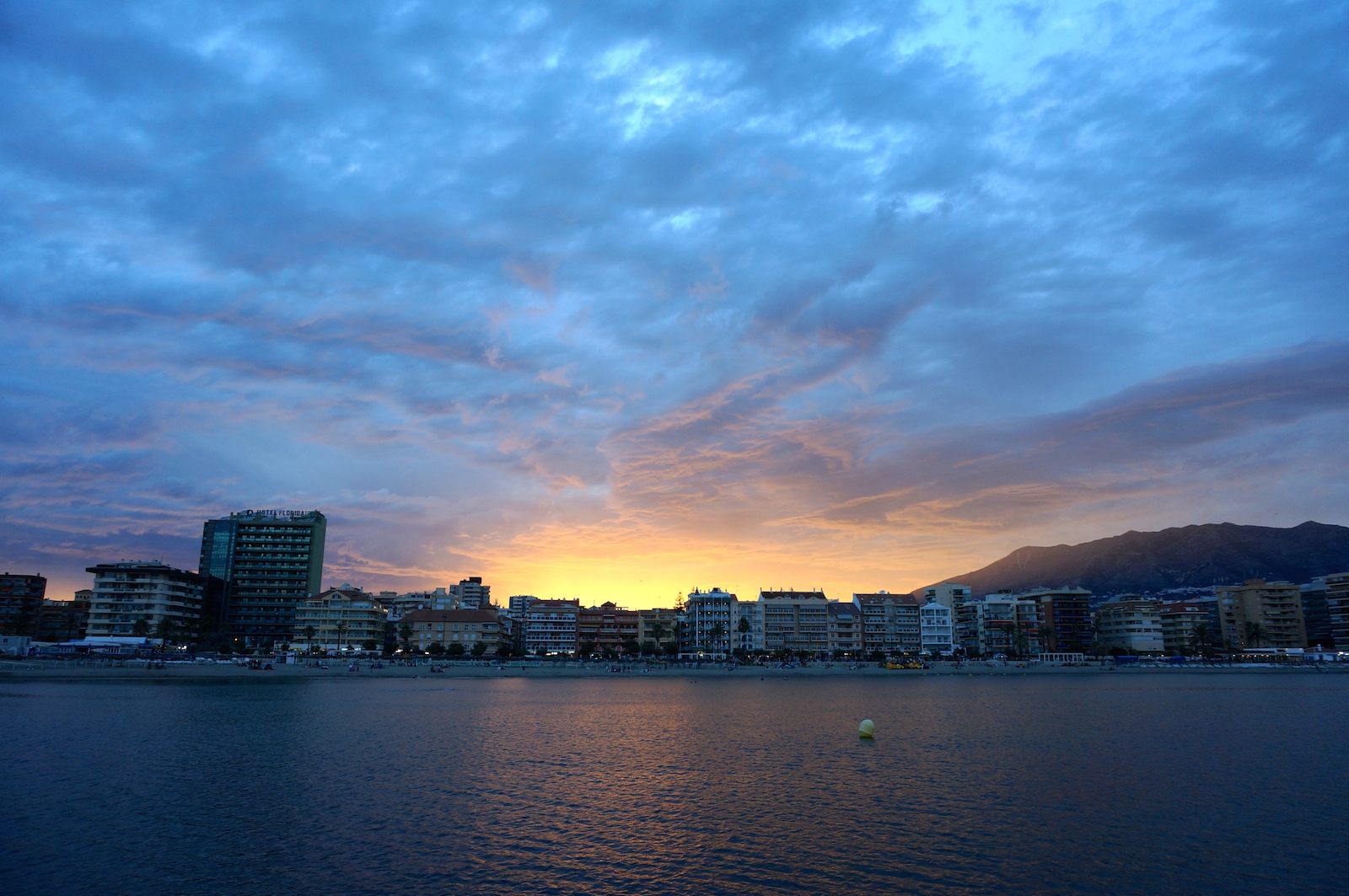 The weather looked like it was going to get a bit rough for the next few days so we decided to head down to Benalmádena, a large marina where we could hold out for a while. We set off early to avoid the winds in the afternoon, but they picked up early, and we arrived again in crazy conditions. We stopped off at the reception pontoon and they told us that the winds would build during the rest of the day so it was best to head to the berth as soon as possible. It told us in the pilotage that they would try and upgrade us to a bigger berth, and that they did, but we were in no position to argue as we desperately wanted a safe harbour for a couple of days. Do watch this trick though – it’s an expensive marina to start with so getting an unfree ‘upgrade’ to a 20 meter berth is reason enough to avoid this until they start playing nice again.

So we left the reception pontoon, leaving behind one of our mooring lines – still not really sure what happened there but luckily no harm was done. Our new crew did a sterling job when we came into the berth, which is fantastic given that we’re still new to the Med mooring thing. Simon reversed down the centre of the berth under pretty rough conditions- where did that 25 knot cross wind come from? Then I threw a line to the marina man that had been patiently waiting for us. He took the line and dragged us to port, pulling us directly towards the boat next door but fear not! Able Seaman 1 (Simon’s Dad) did a fantastic job with the boat hook pushing the bow back around, while Able Sealady 2 (Simon’s Mum) deftly held out a fender at the stern while distracting the nice English man from the other boat with some friendly chatter. Meanwhile I ran around with some slippery slime lines. All-in-all a great dock under the circumstances. Just one small walk of shame back to the reception pontoon to collect a line – whoops!

We stayed in Benalmádena for probably longer than we would have liked. It was a touristy town with lots of Brits abroad, which was great for the first night as we got to watch the England game (yes we know they are already out!) The beach was lovely too and it was great to get a bit of downtime.

However we grew to hate the marina. There was a huge swell that came through, constantly knocking us around. At first we thought that it was just probably some freak weather conditions but then when we looked around all the local boats had spring shock absorbers on their lines so it looked like it was more of a long-term problem. It was so rolly, and the wear and tear on the lines in just a couple of days was insane. What made things worse, however, was that they’d put us in an oversized berth with an oversized price tag – 55 euros a night – which was the most that we’d paid so far. The wifi was rubbish and the facilities were average at best. The town was much too touristy for me too, which is kind of what I expected from the Costa del Sol, but I hoped for something different.

On the last night we did have an amazing paella in the restaurant nearest the marina, but even so it was time to move on.