Our last stop before heading out into the North Sea was to be Cuxhaven. Here we would take on more fuel before the three or four day crossing back to old Blighty.

By the time we arrived it was dark. Jamie radioed ahead to request permission to enter the port and told them that we would like to refuel. Our request was given the ok, so we headed in, although there was a pretty strong current running past the entrance which caused us some issues. We tied up alongside the fuel dock but we couldn’t work out how to operate the fuel so we called again. The harbour master informed us that there that we couldn’t get fuel today but there would be someone there tomorrow, so we agreed to stay on the fuel dock for the night.

There was nothing else to do but head to the pub! So we set off and ran into some boat buddies that we’d bumped into at Rensburg. The told us that there wasn’t much happening in town but to head over the levy and then turn left to find the nearest drinking hole.

It turns out that none of us really knew what a ‘levy’ was except that someone ‘drove their chevvy to the levy but the levy was dry’. As we found out it was a kind of bank with stairs over it. The directions were spot on, but when we arrived the pub looked closed, this was a Sunday night at around 11pm so we weren’t expecting much, however Jamie tried the door and to our surprise it opened, and it served beer! So we went in.

We could see what our buddies meant though. This was obviously a quiet town and this would be the first and last beer – or so we thought. Before long more and more people started to turn up, then the darts started, and then the dice started. In fact, you couldn’t get another beer unless the barman was between games.

And that’s when we met our new fried Claus. Claus was a retired pilot that used to pilot planes from Hamburg via Singapore to Sydney. He was also a little off his rocker. First he looked like he wanted to start a fight with us, but after the barman told him off we became BFFs. He liked to bestow gifts on me, like some of his beer, one cent pieces and trolley tokens, but I wasn’t so keen to accept them. He loved Pete, as that was his fathers name. But he wasn’t sure about Pete’s relationship with Jamie and thought he’d be much better off with a girl, so that’s when the girly mag came out. Nice.

Yes it was one of those crazy nights where you laugh and laugh until your belly hurts and it will definitely be one to remember!

We woke early this morning to set sail across the longest and most daunting part of the trip – the North sea! I was a bit apprehensive but also keen to get underway. First up, we needed diesel.

After waiting a hour or two for someone to arrive, it wasn’t looking promising, so Jamie called up on the radio. Apparently it’s a public holiday and so it wouldn’t be happening today – I couldn’t believe they didn’t tell us that last night!

Our options were to go back through the lock to Brunsbuttle to refuel there or try the garage, 2 kms away. After our scary experience in the lock yesterday we reluctantly decided on the later. Fortunately we were able to get the last two 10 litre fuel cans at the garage and fill them – a small victory. We dragged them back to the boat and poured them in. 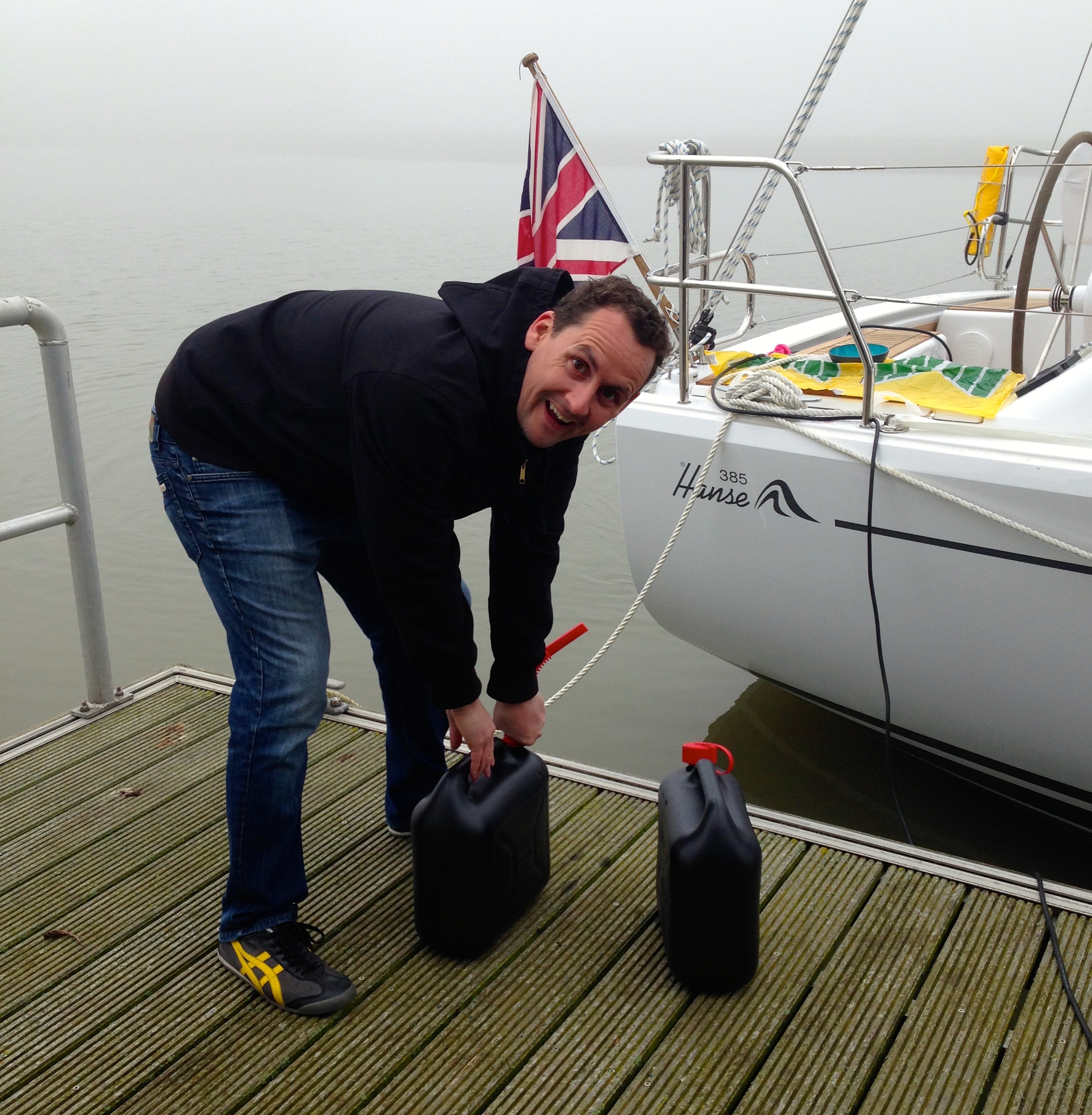 Unfortunately the gauge on the fuel tank has not yet dropped from 100% and we estimate that it should be a lot lower, so we were not sure how much fuel was needed. The two cans didn’t fill it so it was back to the garage again and again. Then, as we were returning the fourth and final time, the fog started setting in. 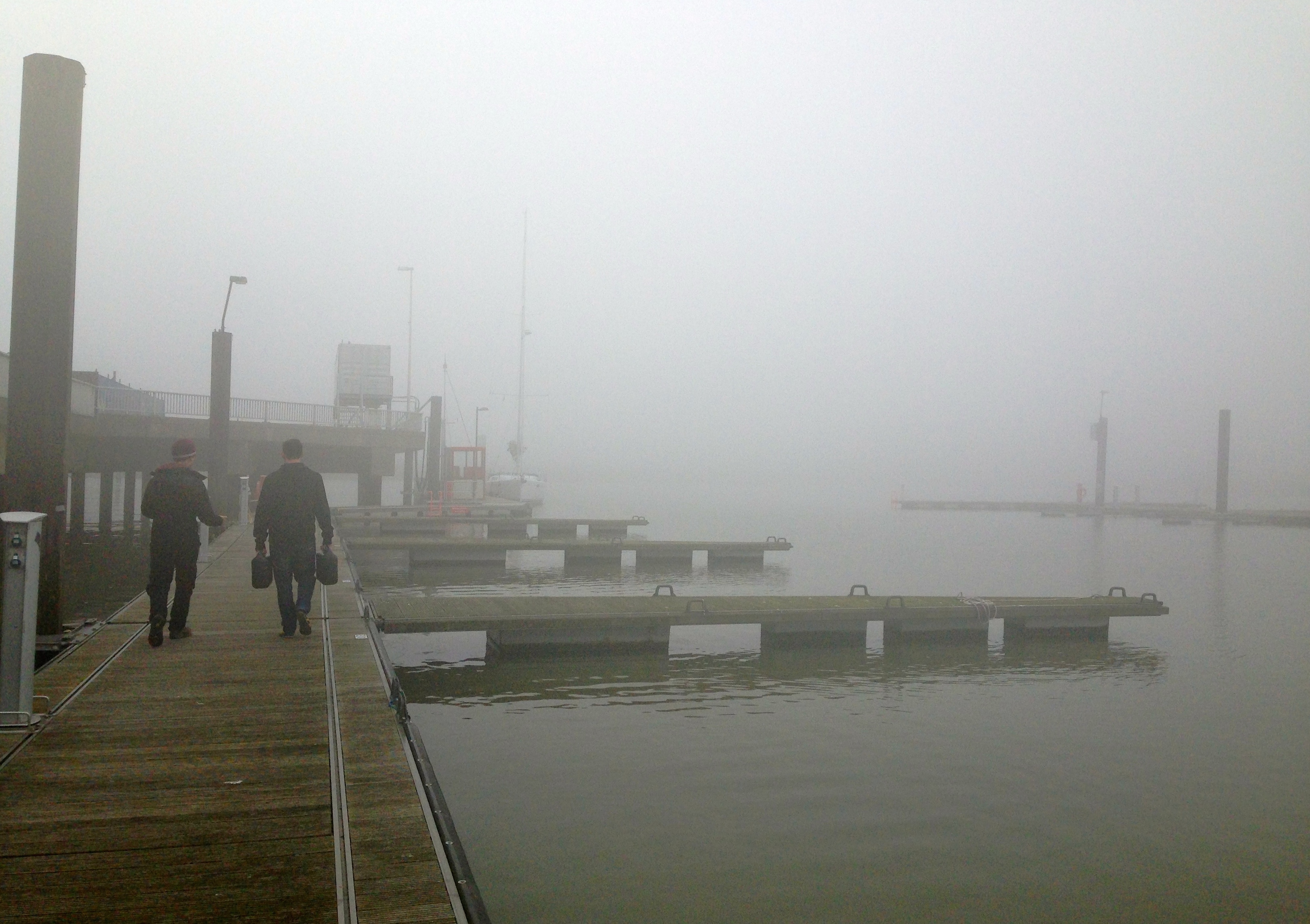 The good news was that because we have AIS and radar, and our trusty fog horn we were able to set off. This wasn’t the case for some of the other boats that were hoping to head down the Kiel canal the opposite way – they would have to wait it out.