Ok I’ll admit it- our long stay in Guernsey was mostly due to us trying to get our heads around the fact we’d be sailing.. on our own.. over the channel.. to France!

It’s hard to put into words how intimidated we felt during the days leading up to our departure. I’d often through about the time when our great support network provided by Pete and his guys would be gone and it would be just the two of us. Sure we’d done the training, read all the books and blogs, etc, but let me put it this way.. neither of us got any sleep the night before we set off.

Our exit from Guernsey at daybreak the next morning was less than elegant. We thought everything was setup correctly but a few fumbles with lines as we motored out meant some quick blasts of power were needed to correct for a wildly swinging stern that hit the wind at just the wrong moment. I also needed to race from the wheel down to the bow at one point to yank poor Helen back up onto the boat via her life jacket after she hopped off to fix a snagged line (I thought she’d chickened out and abandoned ship for a brief moment!) We got out of it without any harm but still not a great boost for our confidence levels. The amazing sunrise almost made up for it. Almost. 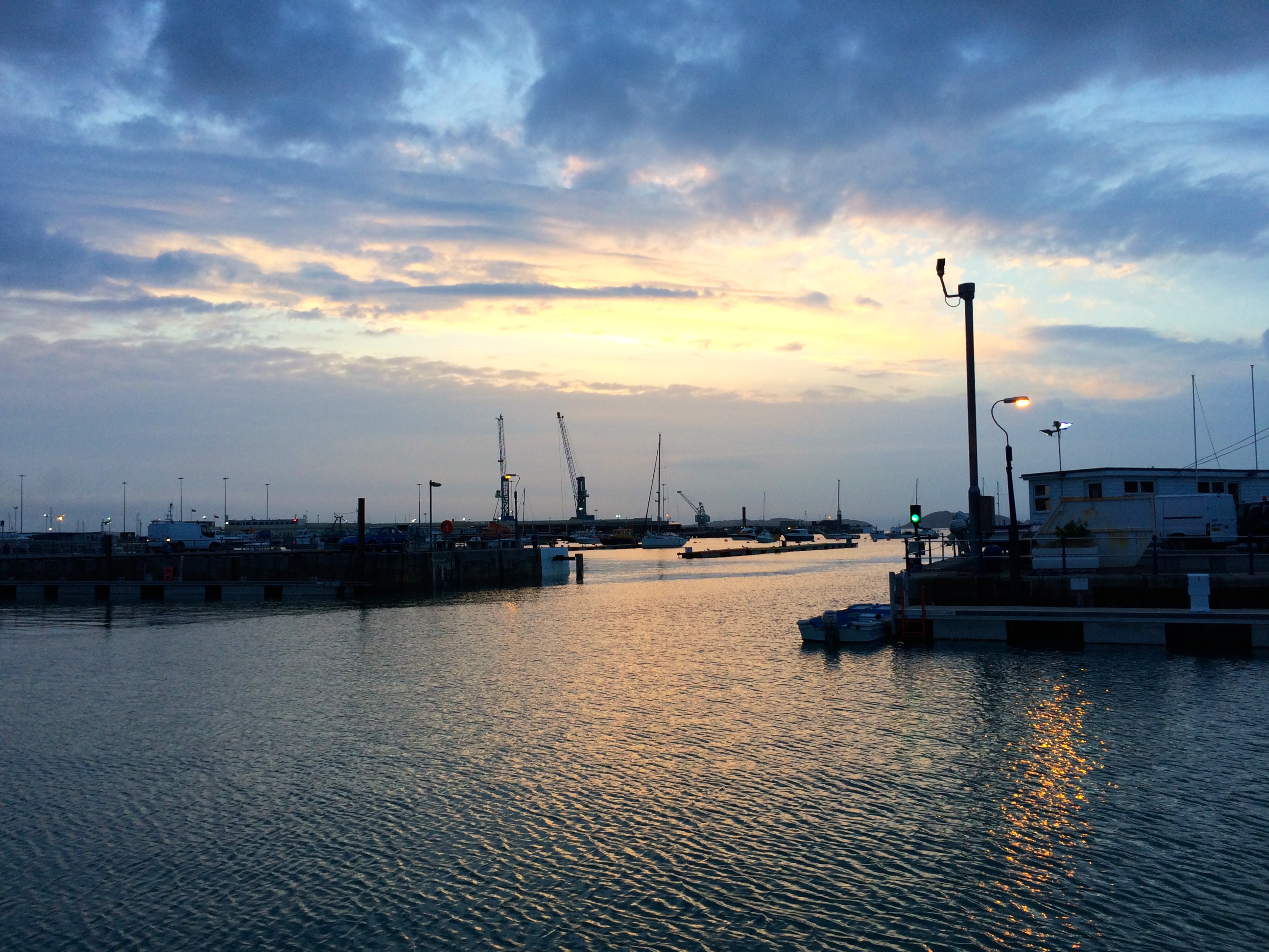 Once out of the harbour things settled down quickly. We’d timed the tidal streams correctly so didn’t point south but head north (score!). We got the sails up and didn’t have any issues getting to the south of the island and then out into open water.

We didn’t really say much for the next few hours. I remember looking over my shoulder time and again to see Guernsey becoming smaller and smaller until it was lost in the morning sea fog.

Although we were still very tense, things started to become quite enjoyable from there onwards. We had a great sail in good weather, watching the miles tick down on the plotter.

The trip over to the French mainland took around nine hours. It was an amazing experience seeing the shoreline come into view, knowing we’d made it here ourselves was really was a moment I won’t forget in a hurry. I’m sure once we’ve done these voyages more we’ll wonder what all the fuss was about but I honestly did feel an amazing sense of pride and achievement in what we’d just done together.

Only thing left was the docking.. Ugh. Luckily though, after radioing the marina as we approached Roscoff, a guy quickly came powering out to greet us. He explained where we’d be heading once inside of the breakwater walls and to wait for him to get ashore so he could help with our lines. Not sure if this level of service will be the norm as we continue or if he just read the terror on my face and decided his pontoons would be safer if he lent a hand? Either way we headed in behind him then around to our berth (which even though was quite roomily felt like I was trying to park a yacht in a car park sized space). I remembered everything Jamie had taught us back in Hamble – checked the wind, didn’t turn too quickly and managed to line up Interlude pretty much bang on as we entered our space. Once my work was done (I just point the thing and hope really) I saw Helen and our very helpful marina hand quickly tie off lines in all directions until Interlude was secure.

The engine was turned off, sails bags zipped up and we gave each other a massive hug of relief before tiredness hit like us a sledgehammer and we collapsed into bed.

We’d made our first crossing together, solo.