After a nice couple of days in Lagos our first trip was to Faro, or at least an anchorage near there.

There’s not much to report about the trip over. Except for the fisherman. It’s always the fishermen! We were taking an easy sail over there and I was on helm with Simon snoozing on deck – one of his favourite pastimes. I was keeping an eagle eye out for pots, after the trouble we had before, while also keeping an eye on the chart plotter.

AIS has been a God send since the beginning. Anyway I was checking out the boats around me that we’re going in the same direction, and any others in the near vicinity. There was just one fisherman whose status was anchored. No problem there. He was kind of annoyingly in the way so I altered course to port while others in our fleet went to starboard. We got pretty close, which was cool, and I was thinking about fetching the camera when suddenly I got the impression that he was moving… towards us. Checked the AIS again,
status = safe.
anchored.

Studied him again and then woke Simon who confirmed, yep, definitely on the move! Anyway I went slightly left, he went slightly right and we passed without incident but lesson learned – don’t always trust AIS and definitely don’t trust those pesky fishermen!

After that there was just a bit more jostling for position with the fleet, some choosing to stick doggedly to the straightest track while hammering the engine and others tacking back and forth using the little wind there was. No one really made any huge gains.

We made it past Faro and up the river towards the anchoring zone that Simon had found on a blog. 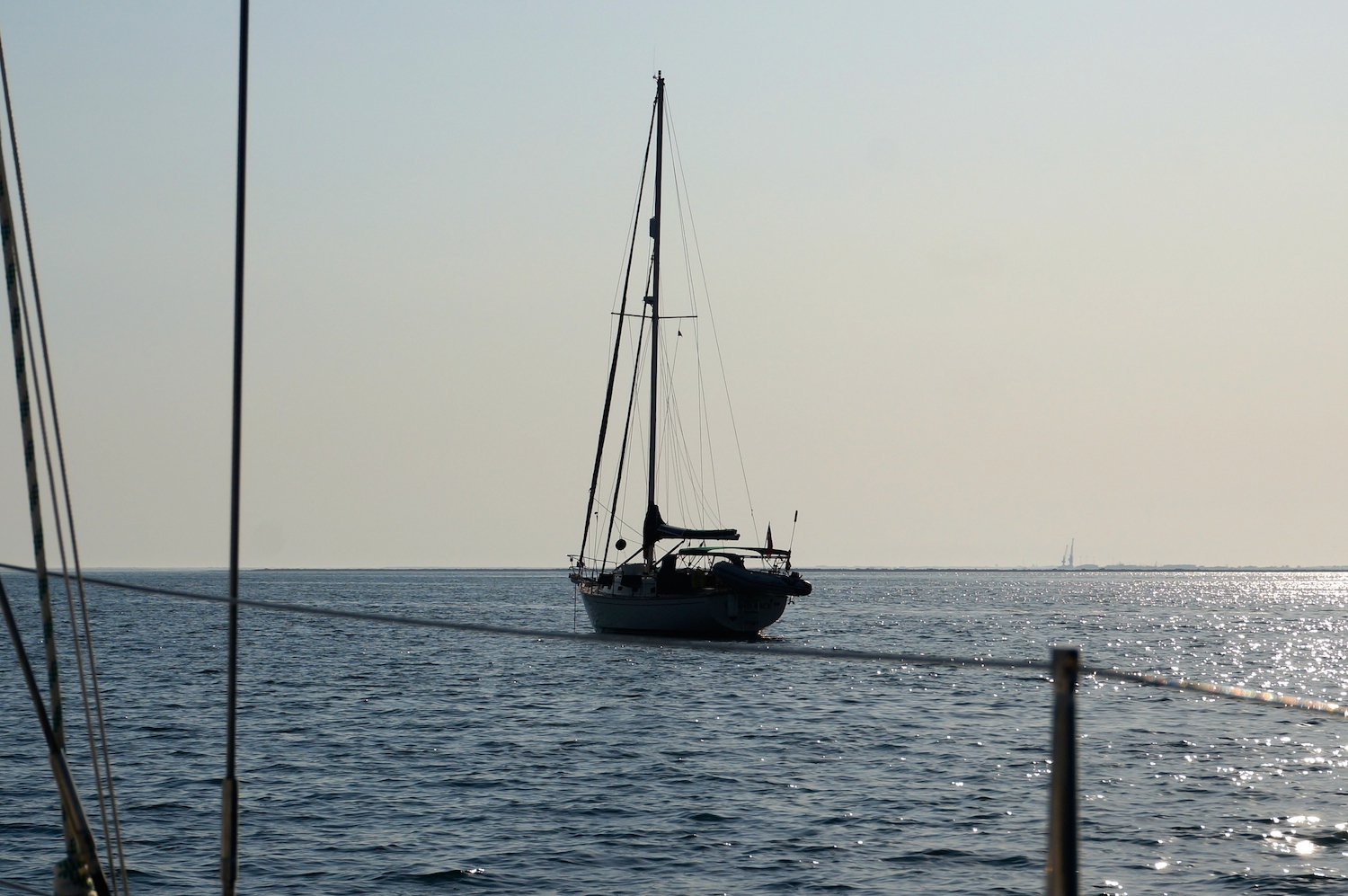 Imagine our surprise when we got to the anchorage and found a nice spot in front of Smitten, the cat we’d been following in AIS all day, and it was flying the Aussie flag. We exchanged a few ‘G’Days’ but unfortunately we didn’t get chance to pop over and introduce ourselves. Next time!! 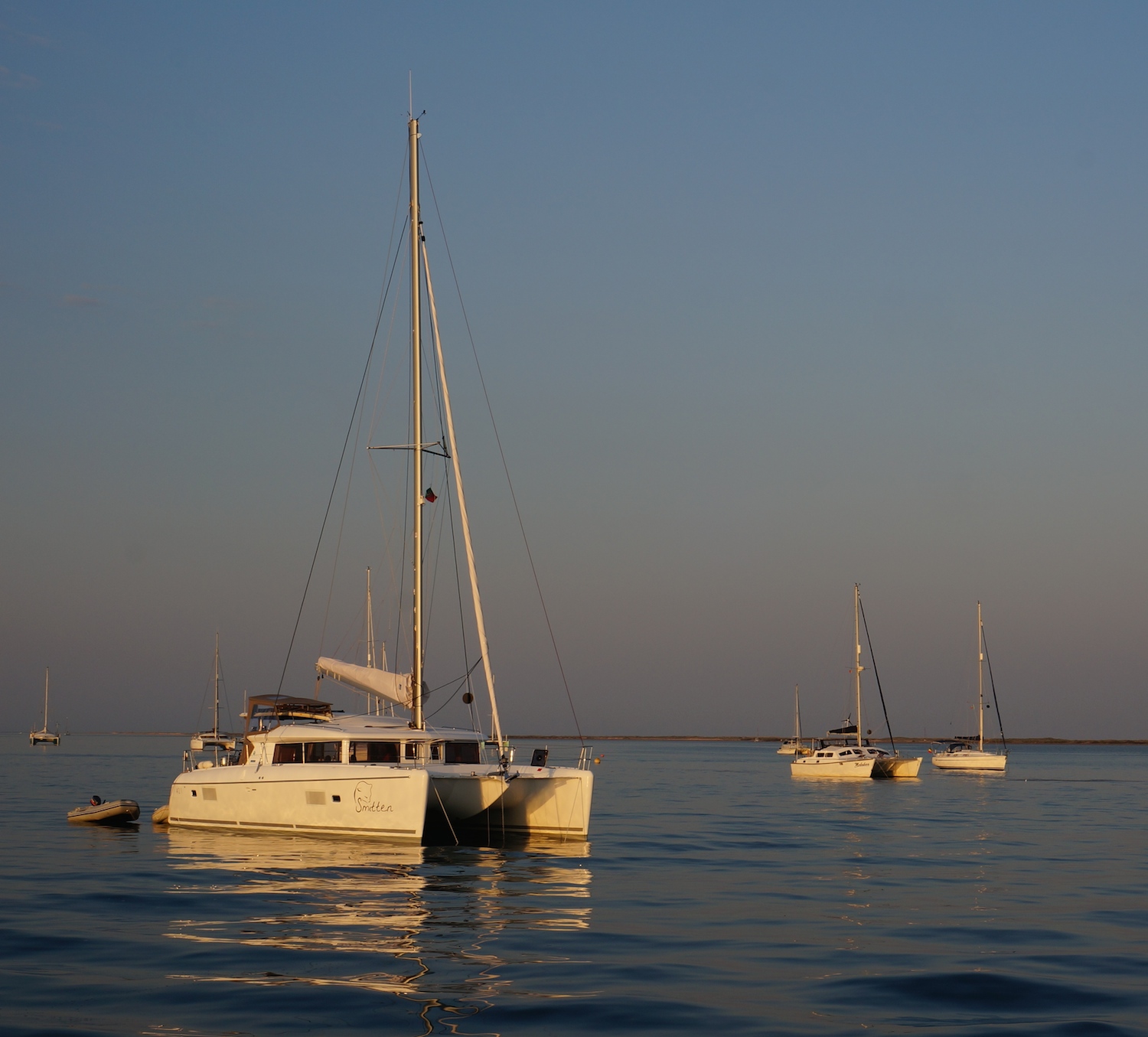 Tonight we were hell bent on an early night ready for an earlier morning tomorrow and an even bigger run down the coast. We watched an amazing sunset, had dinner and got ready to have a long snore. 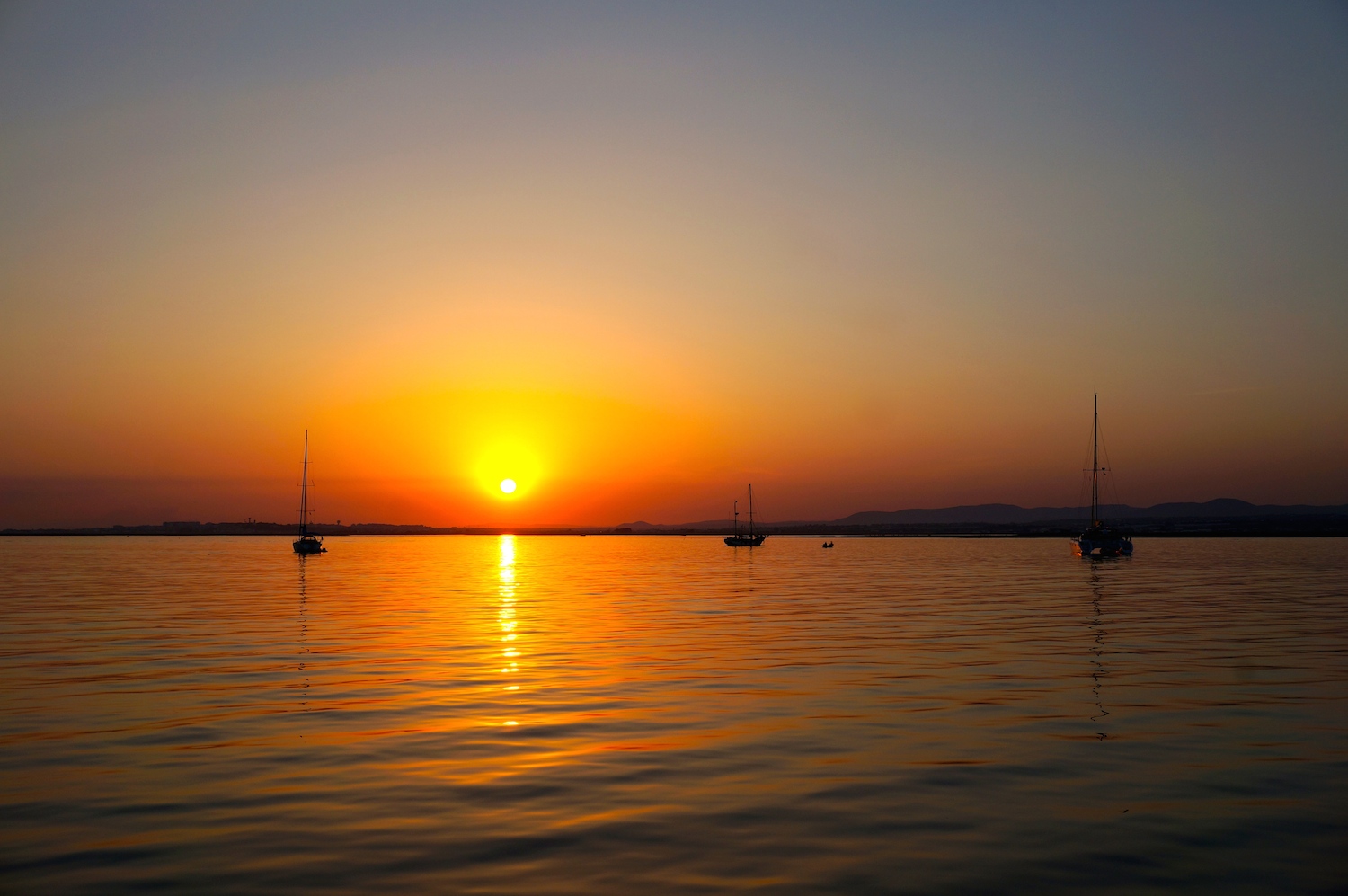 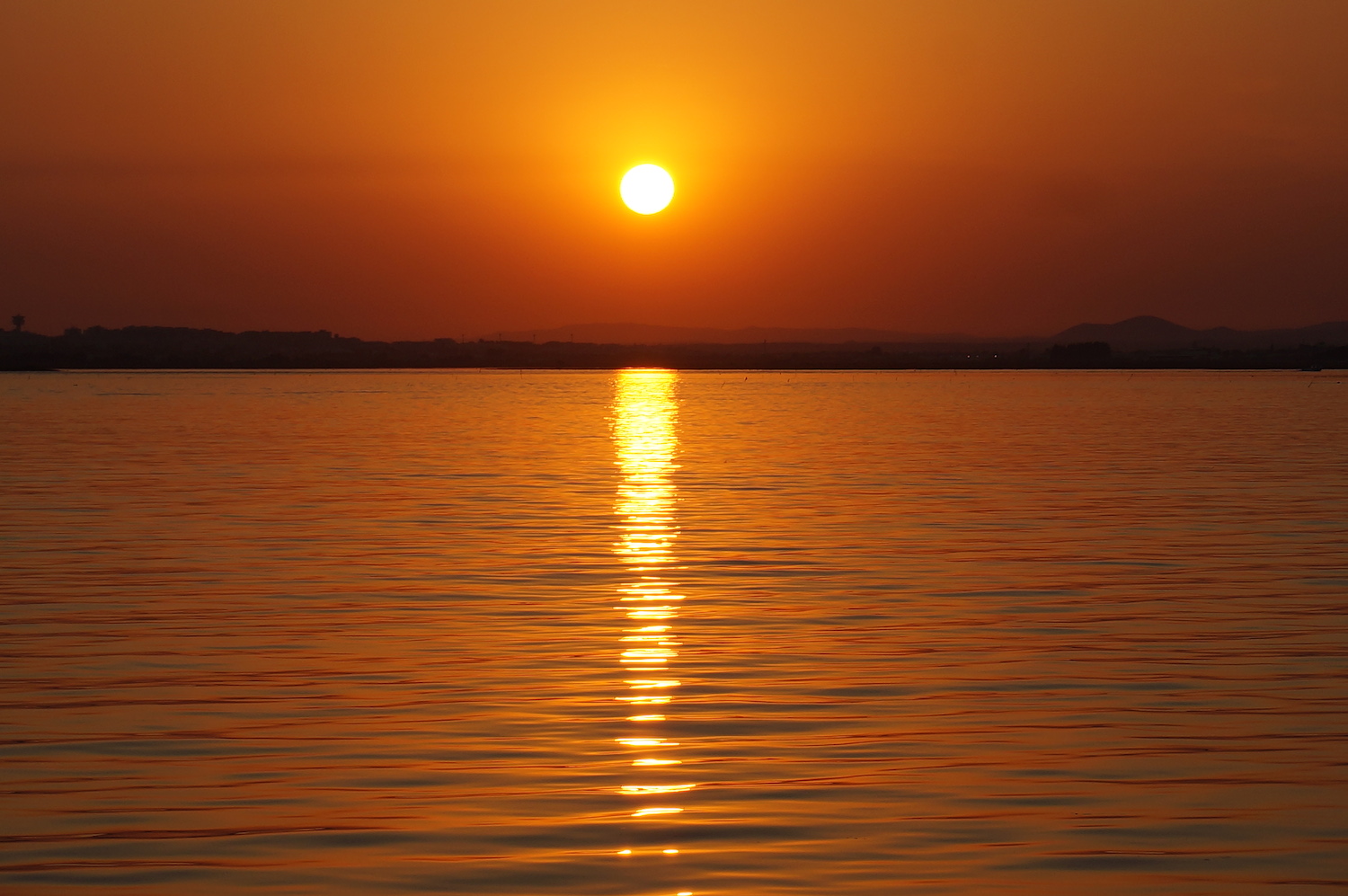 But that was not to be, because who should turn up but Anchorman. Anchorman and his friend were in a huge red sailing boat and they were having huge amounts of trouble anchoring. His solution to this was to drop his anchor as close as possible to anyone else’s, after all, if they had firm holding, he can – right?

Anyway, he came super close to us and so Simon went up there and gave him a bit of a stern look. By that I mean he asked ‘Are you ok mate?’. Anyway turns out he was having problems because of “all the slippery mud”. But as another Brit so delicately pointed out to him “no one else had any problems and maybe he should consider purchasing a bigger anchor for his ridiculously large boat!”.

Anyway, if you think he’d be put off and head to another less muddy anchorage or nearby marina then you’d be wrong. No instead he chose to go around to each and every other boat until he finally got a hold next to a boat who’s owners had obviously gone to bed. It also happened to be far too close for comfort to us. Needless to say, we didn’t get much sleep that night. Thanks Anchorman!

It was a long trip! That means an early start which can be like pulling teeth for us. The way it works is I get up as soon as the alarm clock annoys me sufficiently and drink tea. Lots of tea! But while I’m doing this I’m pottering around getting things ready and doing all the little things that we should of done the day before. Then as soon as the sun comes up I start annoying Simon and when he’s sufficiently annoyed he teleports onto deck. Before you know you’re off and away.

We thought we’d done pretty well, ‘first up and at them’, when all of a sudden someone got the jump on us. 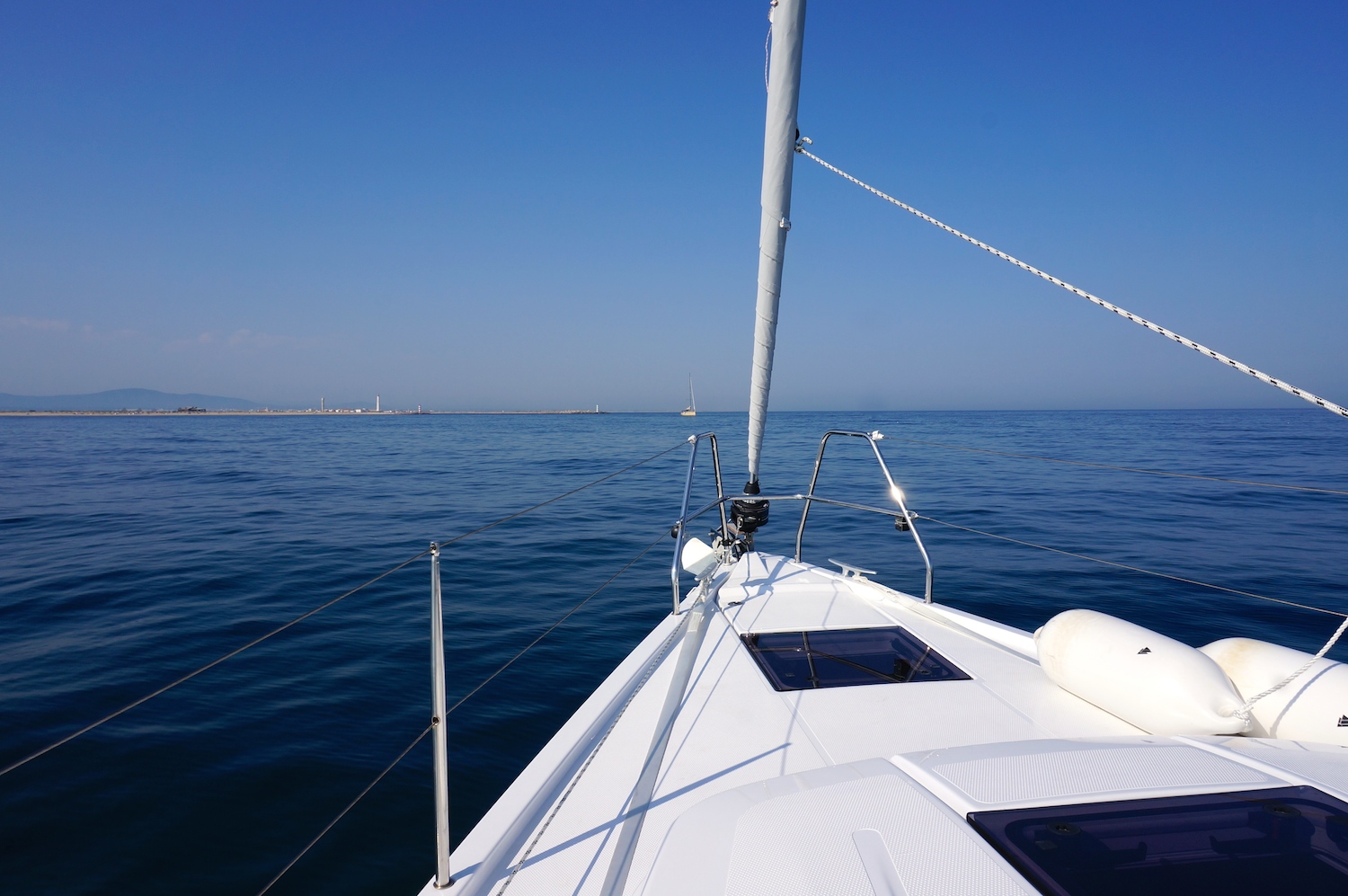 As we were headed out of the harbour through the swelly entrance we were amazed to see it was ‘Nurse it’, a yacht we first saw in Camaret. It was like seeing an old friend. Anyway we raced ‘Nurse it’ and a few other boats all the way to Cadiz where we all went our separate ways. We headed to Rota.

Our plan was to stay in the anchorage there but after dropping the hook we found it was very rolly due to the swell coming through. The wind was quite light, only 10 knots, and not expected to rise but it was from the wrong direction for this anchorage. So we slunk into the marina, with our tails between our legs, where we berthed on the fuel pontoon. 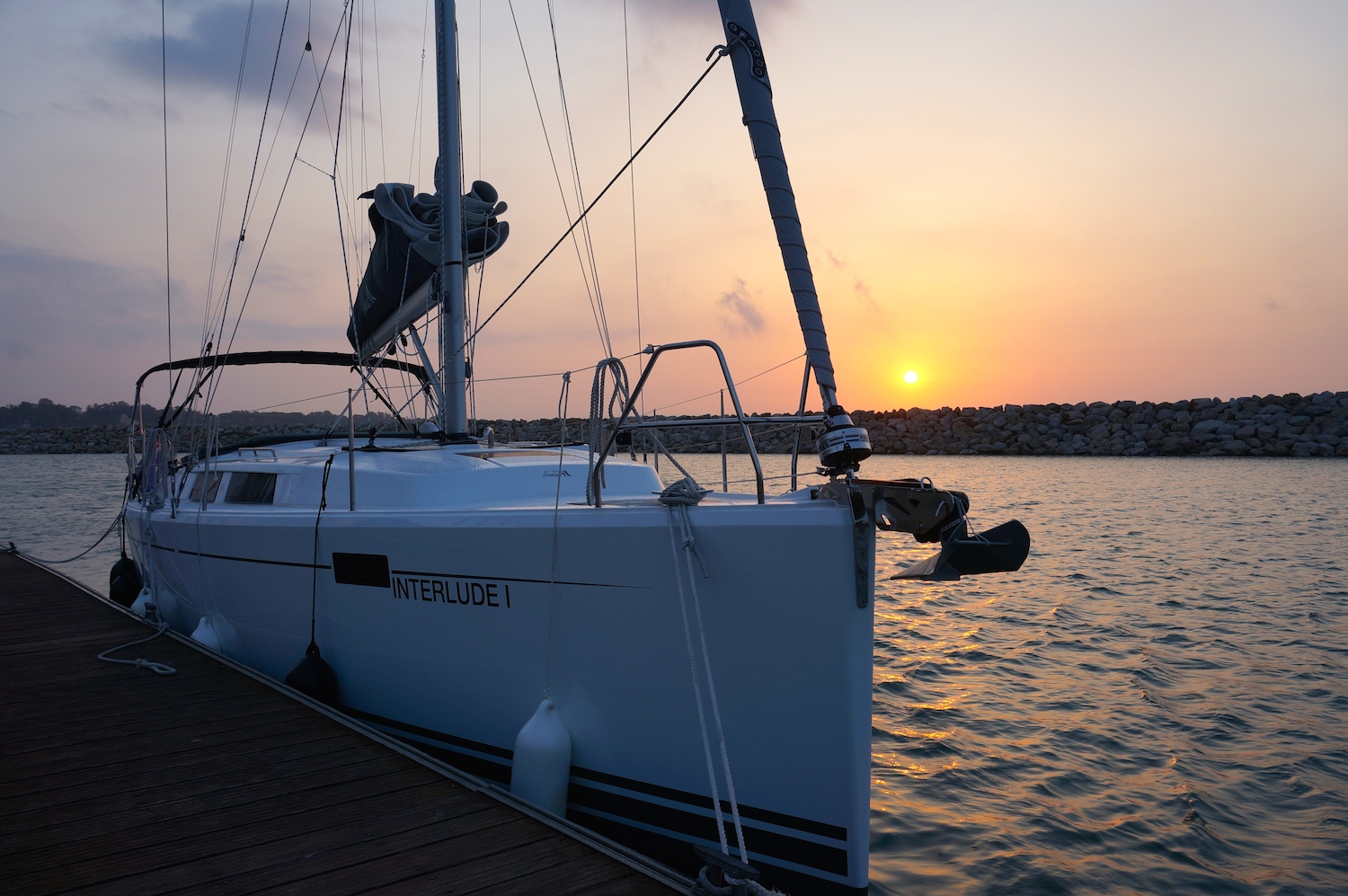 We’ve been having a few problems with the fridge in the hot weather which we’ve put down to opening it too often or for too long. After two disastrous attempts at dinner we called it quits, ate some cheese and crackers and headed to bed. But not before the security guard had hit us up for our papers. I’m sure there will be a bill to follow.

The weather did pretty much the same as yesterday. A cloudy start to the day with no wind, then the wind picked up and came around for a nice close haul down the coast.

It was just on the cusp of being fast enough to push us at a decent speed but whenever we switched off the engine, the wind died and then when we turned the engine on again, the wind picked up. Can’t complain though we got in some awesome sailing for much of the day and the sun came out about midday. 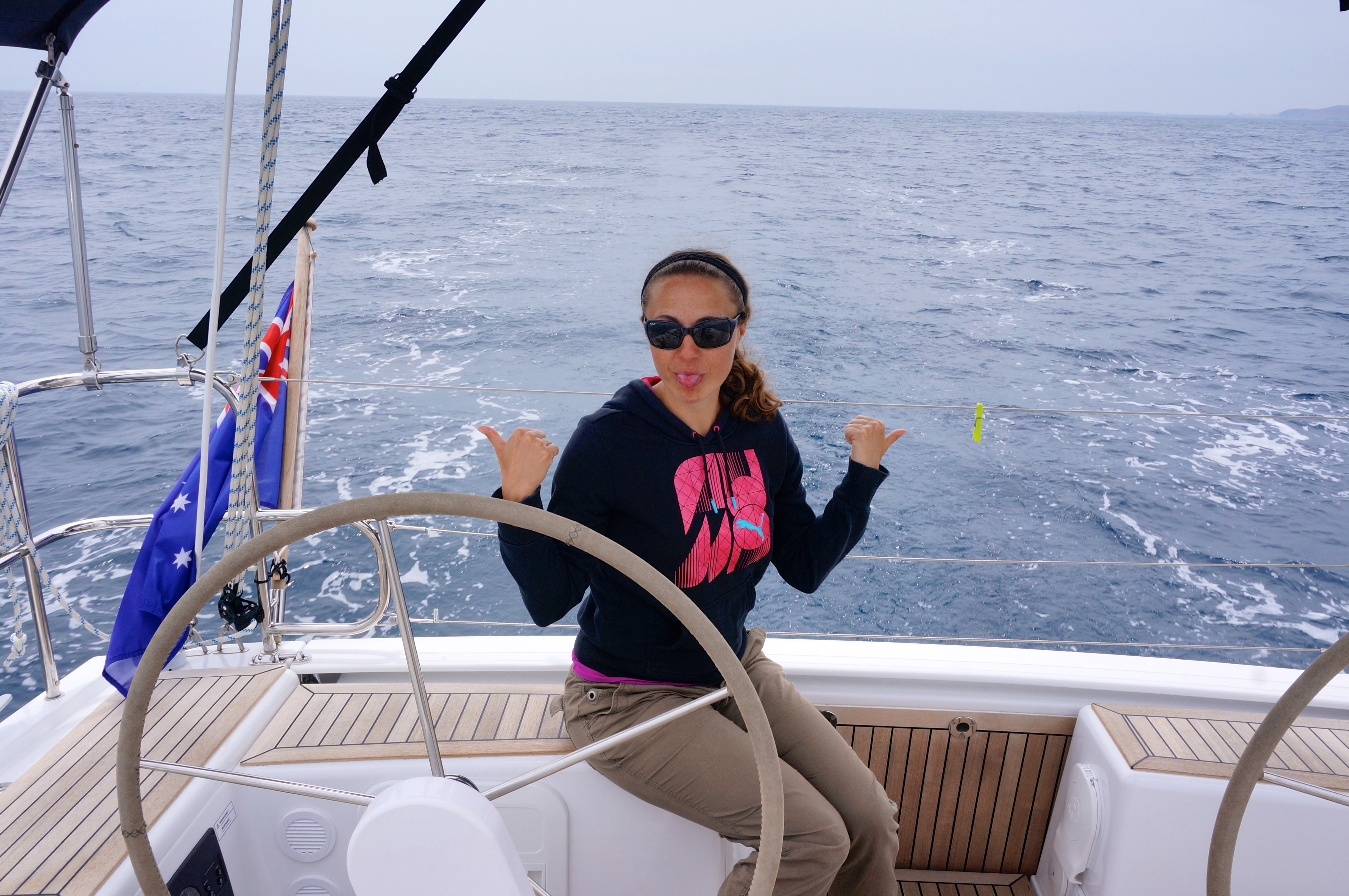 We did have a scary experience as we rounded one of the capes. Scary for us means I’m freaking out while Simon’s cool as a cucumber and wondering why he’s been rudely awoken from his Nanna nap. Anyway this time it was shoals. Now shoals to me are those things you dread in your theory exam as you have to work out the best time to go over them or if you have to avoid them all together.

According to Simon’s three-waypoint passage plan we could sail straight over them – which we did. But my gripe was the depth we were recording was a meter lower than what was on the charts. Simon’s answer to this was moving sandbanks. For me it was scary but we passed through and entered the flat bay of Barbate beyond and it did really leave me wondering what all the fuss had been about.

By the time we got to the marina it was roasting. The helpful marina man tried to help us in but did some very strange line work that had us perplexed.

The usual routine is that I throw the front line to any random passerby then jump off with the mid. Usually works a treat. This guy commandeered the pontoon, took both lines, tied the mid to the back of the pontoon so tightly that Simon couldn’t actually drive forward into the berth. And then there was some frantic scrambling before marina man edged away and left us to our own devices and we fixed up the lines ourselves. Anyway after that we both agreed that we’d much rather have done it on our own. So that’s one for the books!

After that, and a much deserved shower, we headed into town for a paddle in the warm waters of Gib Straights and a beer or three with some more World Cup action.

I always got the impression that Barbate was one of those places that you just pass through on the way to somewhere much better but it was actually a really lovely town with an amazing atmosphere where you could definitely while away a few days.