A last moment hiccup with the solar order meant we only got half the panels fitted, plus all the connectors and wiring, but the two larger panels will now be shipped to Las Palmas in the Canary Islands. We wanted Interlude to be perfect before leaving Gib but that just isn’t going to happen (can a boat ever be really finished?). We did get most of our lists ticked off though so all good.

The reason we couldn’t wait any longer was that a break in the weather came and if we didn’t take it the next opening was maybe a week afterwards. This would mean no Morocco which we weren’t prepared to miss if at all possible so we left Queensway Quay Marina, filled up with ridiculously cheap fuel and headed out into the straights. We were happy to be moving again. 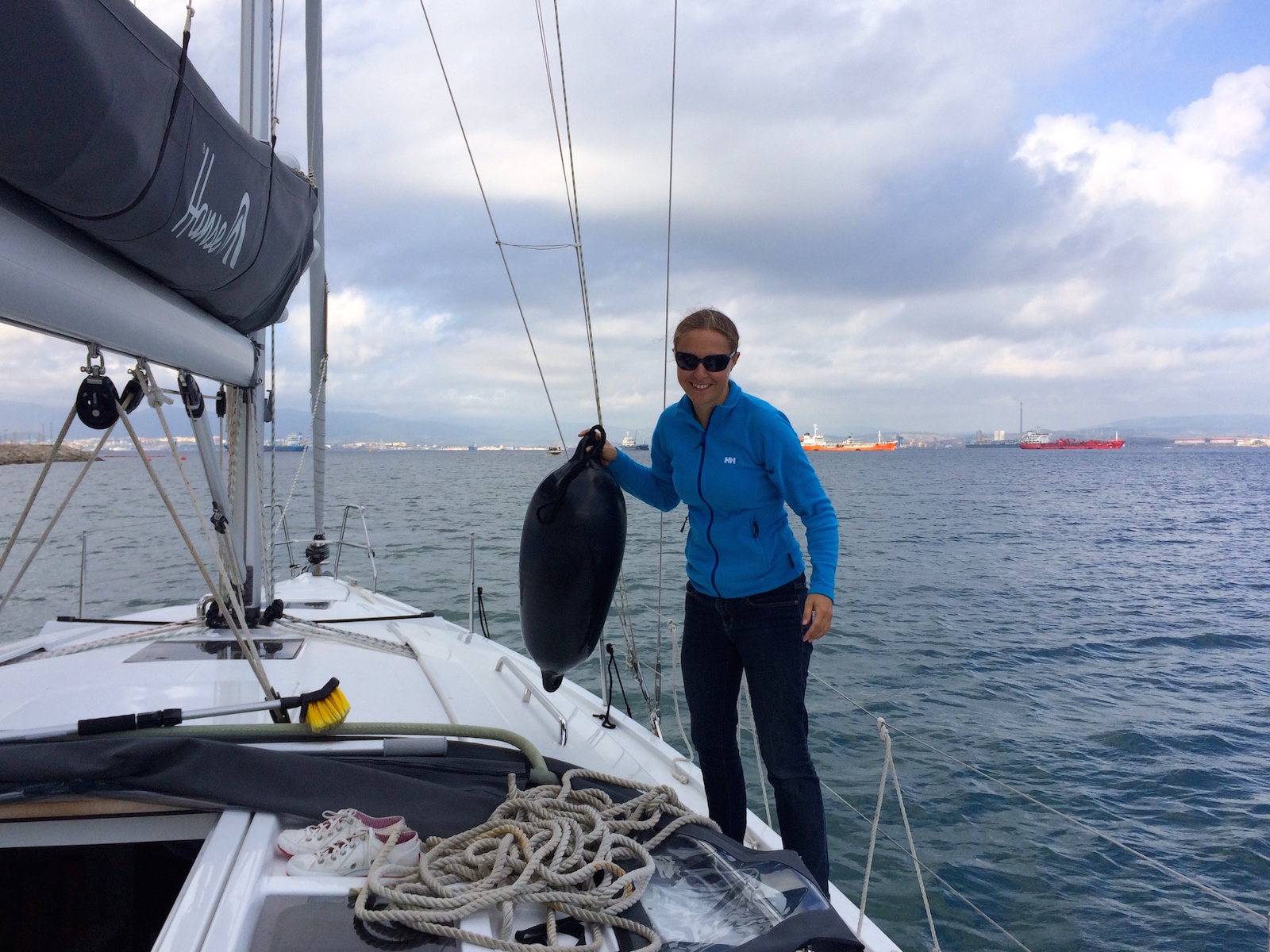 Our passage through the straights coming into the Med had been easy. We weren’t so lucky on the way back out. The straights are well known for being a pain in the rear and they threw everything they had at us. The predicted ’20 knots max’ grew into 35 knots. We had waves of at least 3m, maybe more, and so much shipping traffic the AIS looked solid white at times.

Getting from North to South across the shipping lanes was actually really fun. We were travelling with a few other boats and saw them make a break for it as the smallest of gaps opened up in the constant stream of supertankers so we turned into the wind beam on and took our chances as well.

Playing frogger with these massive ships might be fun for us but the wildlife isn’t so lucky. One thing no one mentions is the amount of damage these tankers do. We saw loads of dolphins and whales as we crossed the main channels that had been killed. I guess they try to play with the tankers the same way they do with our boat and get hammered or just run down. It wasn’t a nice thing to see and I guess that goes on 24/7 through that area. The price of our consumerism I guess.

Once we’d made it safely to the southern side of the straights we just needed to press down the coast of Northern Africa and head round the corner South. We hoped this would provide shelter from the 30 knot winds and big seas which were still with us. For a time things did calm down as we headed south towards Rabat in Morocco but then the winds returned and actually grew! We had a solid 35 knots, gusting higher, most of the way down which was really tiring as neither of us could sleep. Interlude handled the conditions really well though which was encouraging.

Around midnight the winds died down a little and I was just about falling asleep as I was off watch when Helen called. I popped up on deck to find us now engulfed in thick fog! I had to laugh as I knew this was going to be full on. Sure enough like clockwork we started seeing target after target on the radar – the legendary fishermen of this coastline were out in force.

Legendary mostly due to the fact a lot of them have no lights, are in small boats, and don’t seem to care about fog – or yachts!

I’m so glad we got our radar fixed in Gib. We’d have been really stuck without it. We managed to carve a path through the fishing boats but it wasn’t easy as they wouldn’t have known we were there and just randomly moved about so we got a lot closer to some than I would have liked. Visibility was well below 75m at this point based off the radar.

As daybreak came the fog cleared and we got our first real look at the African coastline as the sun rose above it. So amazing to think we’ve got as far as Africa on our little yacht now! We took it in turns to sleep as the previous 24 hours has really took it out of us.

Rabat is well known to be a hard port to enter but we timing the tide well and kept checking the local surf reports. We radioed the marina who sent out a pilot boat (which is a must as the channels down the river are small and complex currents run through it). We were greeted with calls of “Welcome to Morocco!” from fishermen lining the banks. Sounds of people calling others to prayer echoed around us. We’d definitely left the Med behind and were in a very different exciting place.