Freedom at last! With all our boat repairs complete and nothing left on our ‘to-do’ list we headed out of Papeete and away from Tahiti. Woohoo! We loved that place but felt we’d been trapped there far too long.

We were headed for Moorea, which every guidebook likes to call Tahiti’s little sister. We pulled into ‘Cook’s Bay’ which is reported to be where Cook landed all those years ago, but then conflicting reports say he landed in the next bay around, so take your pick.

We were a little worried, as Cook’s Bay was a deep anchorage, probably deeper than anywhere we’ve tried to anchor on our trip to date, but with our extra 30m of chain that we added in Tahiti we were keen to give it a go.

The anchoring went well but on closer inspection we realised we’d landed a little close to the reef. 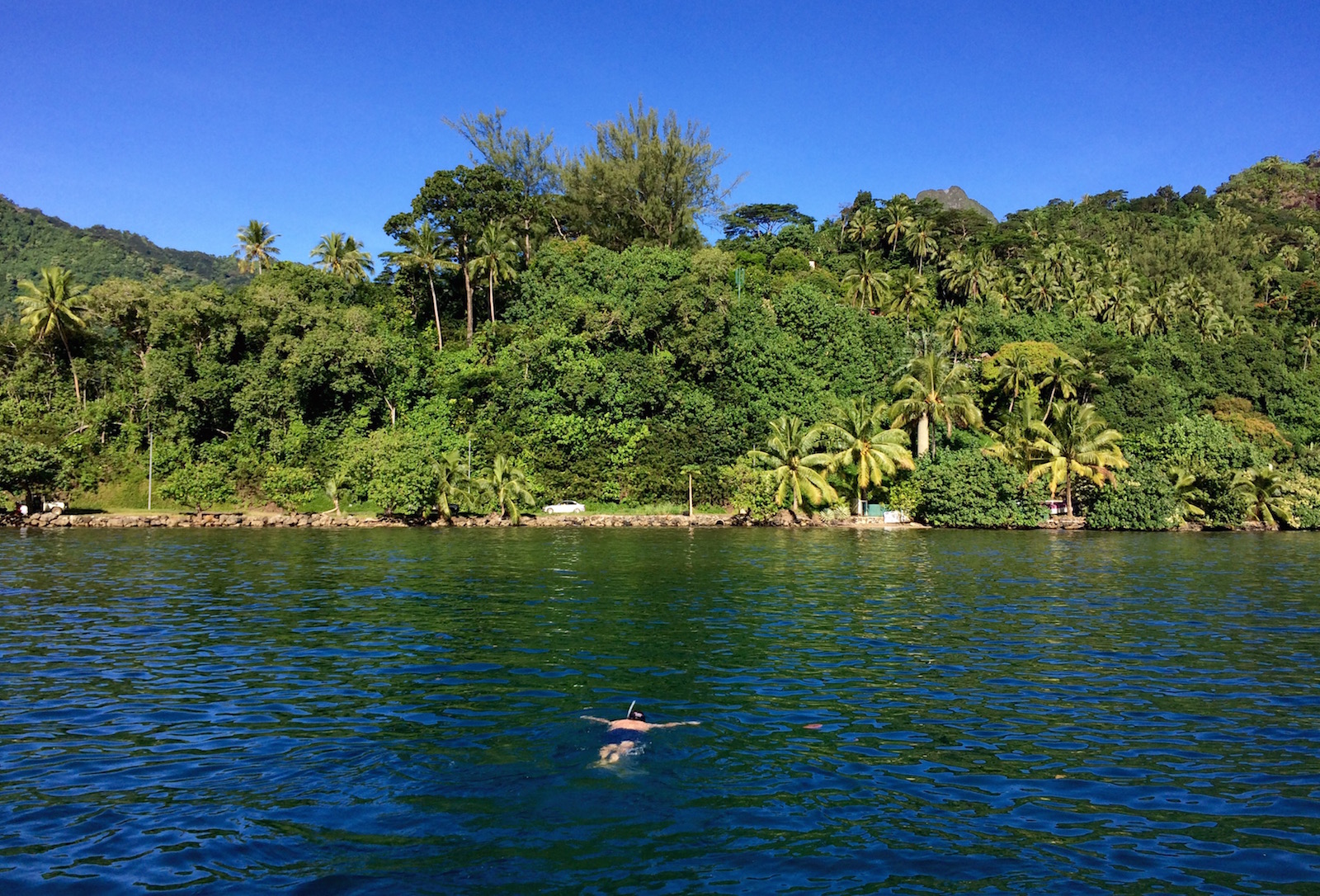 We weren’t sure how much we would stretch backwards with our super-long chain should the wind decide to pick up, so we decided to play it safe and re-anchor a little deeper into the bay. We quickly upped anchor, covering me and everything in the vicinity in a melted-Cadbury’s-chocolate-like mud, but the new, improved location was much better and with the ultra-sticky-mud we were confident of a good holding. So after a bucket shower for me we settled in. What a lovely spot. 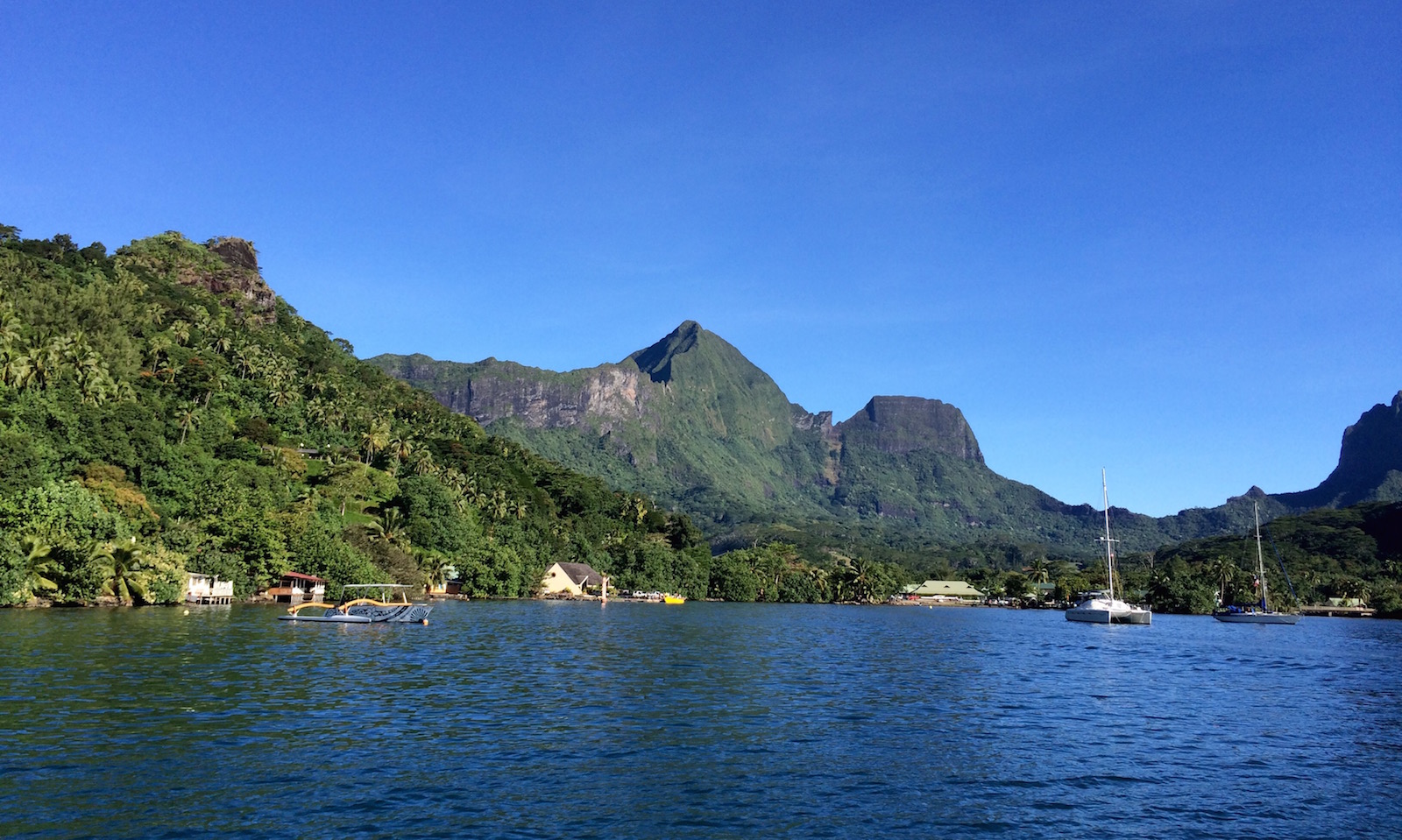 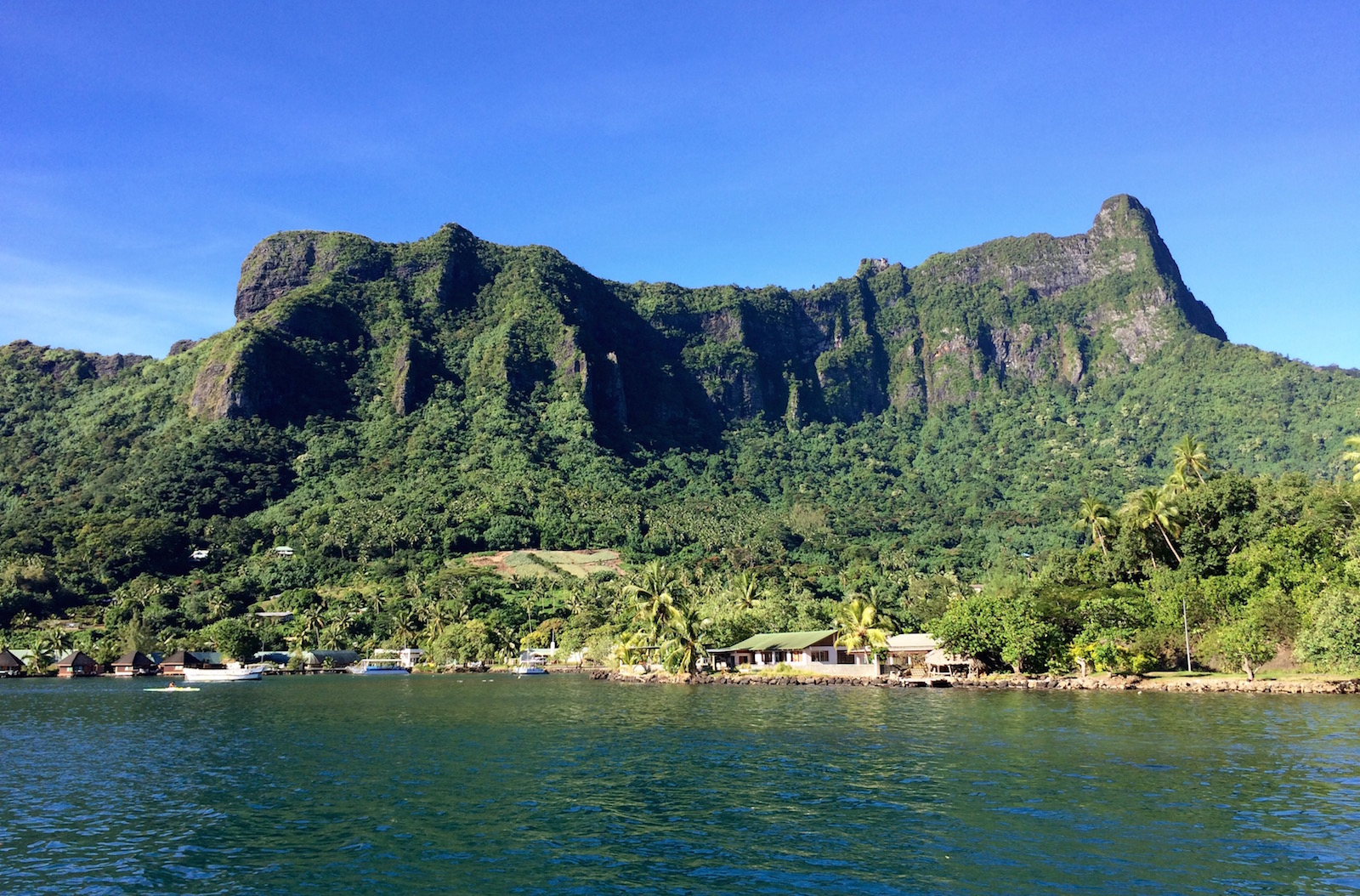 We enjoyed a cold drink on deck to cool us down after a hot crossing and took in the beautiful scenery. Then decided to test out another of the repairs – the ill-fated out-board engine. It worked a treat and we were soon whizzing to shore – nice not to be using those oars again.

We pulled up at the nearby hotel dock. We often have the half-full, half-empty debate but to say this place is half-empty would be being optimistic. It’s a shame but something that we’re slowly becoming accustomed to.

Anyway with not much happening there we decided to head further afield in search of some action. We headed left down the road and found… not really much… ending up in another empty five-star hotel having a beer – at least the view was good. 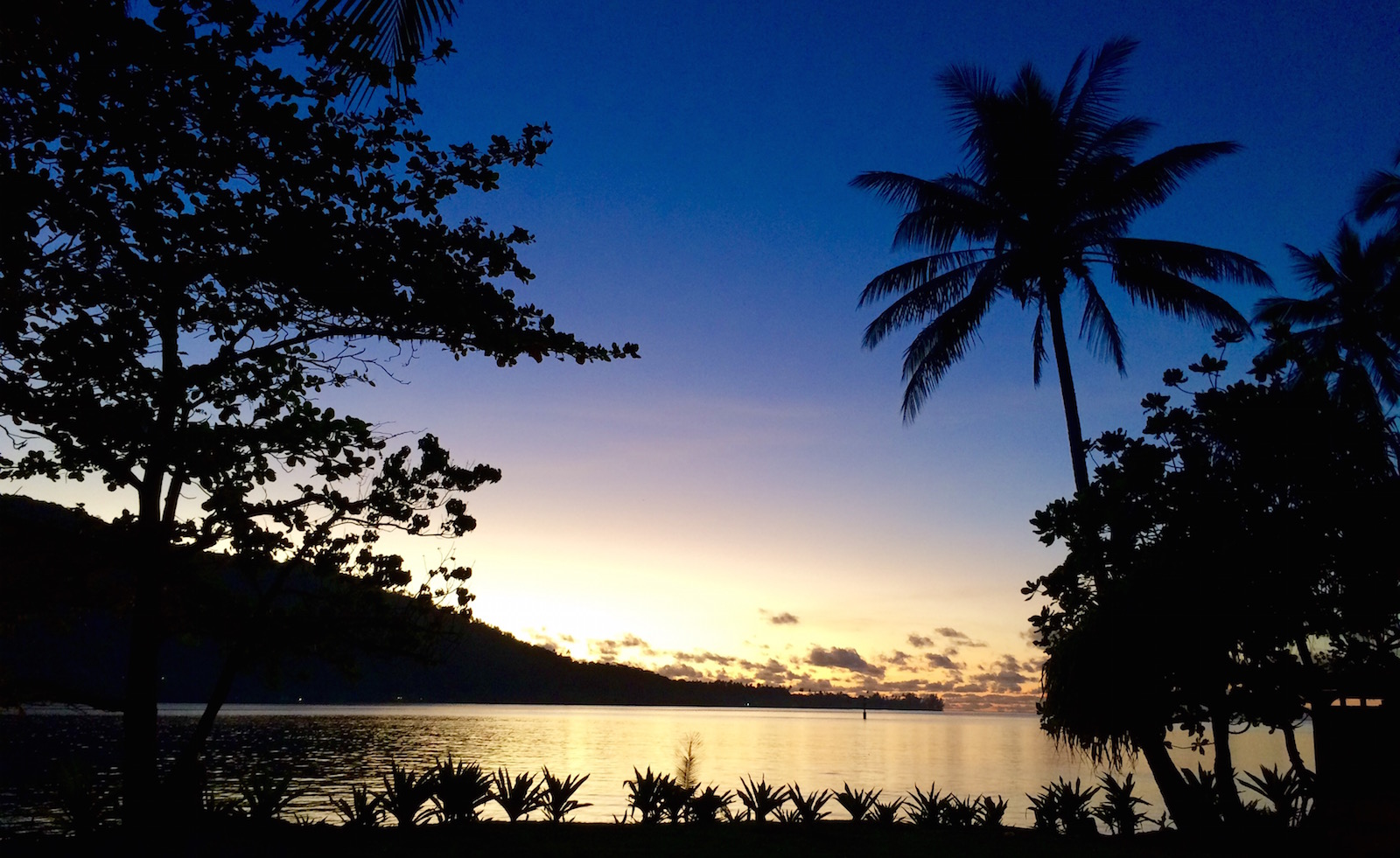 Then as there was nothing else to do we headed to ‘Allo Pizza’ which we’ve read serves the best pizza in Polynesia. It was a low-key roulette-style place with stools bumped right up against the kitchen and pizza oven. The pizza was tasty and the friendly atmosphere was fun and welcoming. The next day we did something odd, something that we don’t seem to do very often which is to say we did nothing but relax onboard. Right up until about 3pm when we got cabin fever and went to shore for a walk. We wandered around the coast road. It was funny to see Polynesians playing boules and shows the cultural-integration between Polynesians and the French. It seems much closer-knit bonding than in other places we’ve been in the Pacific.

We took a little detour to visit the Rotui plant where they bottle and serve fresh local fruit juices (as well as distilled fruit liqueurs) but alas it was closed, well I suppose it was a holiday Monday.

We tried to peep around the corner to the next bay to check it out but eventually the sun started dropping behind the tall mountains and so we decided it was time to head back. And with nothing open in town we slunk home for a bowl of pasta.

The next day we shuck off our laziness and went out to conquer the Bellevue trek early. We were overtaken time after time by schools of quad-bikes, and maybe this should have hinted at something but it didn’t register until later that this really was a long climb.

Just as we had neared the end of our stamina we came across the agricultural college selling their wares. We tasted a number of local jams and then I had an amazing pineapple juice while Simon opted for a banana smoothie – yummo! With the sugar-hit we made it to the top of the mountain to take in the view of the two bays.

On the way down we decided to take the route to the next bay and then catch the bus back. So after a long downward spiral we ended up in Opunuhu bay. It’s a sleepy little village, in fact so tiny there wasn’t even a shop selling a drink and no bus stop… so we started walking back along the coast road hoping to find one on the way. We didn’t find a bus stop or a shop but we did find a van selling pizza on the beach, and with nothing else available and our stomachs rumbling we indulged again! Now it may sound like we’re pizza-holics but really this is sometimes all there is to eat or at least all we can afford to eat in French Polynesia.

We finally stumbled back into Cook’s bay and back to the boat to collapse! Turns out we’d walked half a marathon (around 21km) which definitely gives me a new-found respect for marathon runners.

The next day we were going to anchor on the reef to do a spot of snorkelling but we woke to a cloudy day and decided to walk into the village instead. Of course as soon as we set off the sun came out!

On the way we found the Yacht Club selling a ‘menu du jour’  at a good price so couldn’t resit. This was an amazing place on the water with a stunning view of the yachts near the reef. It was a pretty crowded anchorage so maybe it’s for the best that we didn’t try to squeeze Interlude in there. After that we wandered into town. Other than a few banks, boutiques and restaurants there’s really not much here either. So we took a slow walk back to the boat and prepared for a night sail to… Tahaa.