For a while we toyed with the idea of visiting North Africa on the way back through the Med, but we heard various bad reports and decided to retrace our track back through the South of Europe instead. This worked out quite well as we were rushing through, but we didn’t mind too much as we’d already seen much of this coastline the first time around.

When we started planning our trip from Gibraltar to the Canaries Morocco jumped onto our radar – and we were glad it did. There are a few marina’s on the Atlantic coast of Morocco, but we chose Rabat, the capital, as it had a great reputation amongst the sailors we’d met. Morocco also has a great train system so we thought we could use it as a base to explore some of the other cities.

Rabat is also infamous among sailors for trapping you. It’s located up the river between Rabat and the smaller town of Sale on the opposite side. The river in the past has been shallow, and although now it is regularly dredged it still poses a bit of a problem due to the narrow channels and strong currents. Not only that but it’s a surfers beach which means much of the time there are breaking waves and often the harbour entrance is closed – we watched the weather closely, after our extended stay in Gibraltar there was not much wriggle room on our schedule.

On arrival, we took the advice of the pilotage books and arrived near to high tide, which for us was around 4pm. We hailed the marina for a pilot boat which took us safely up the river, past the welcoming fishermen, the Kazbah Hassan Tower- WOW what a place! 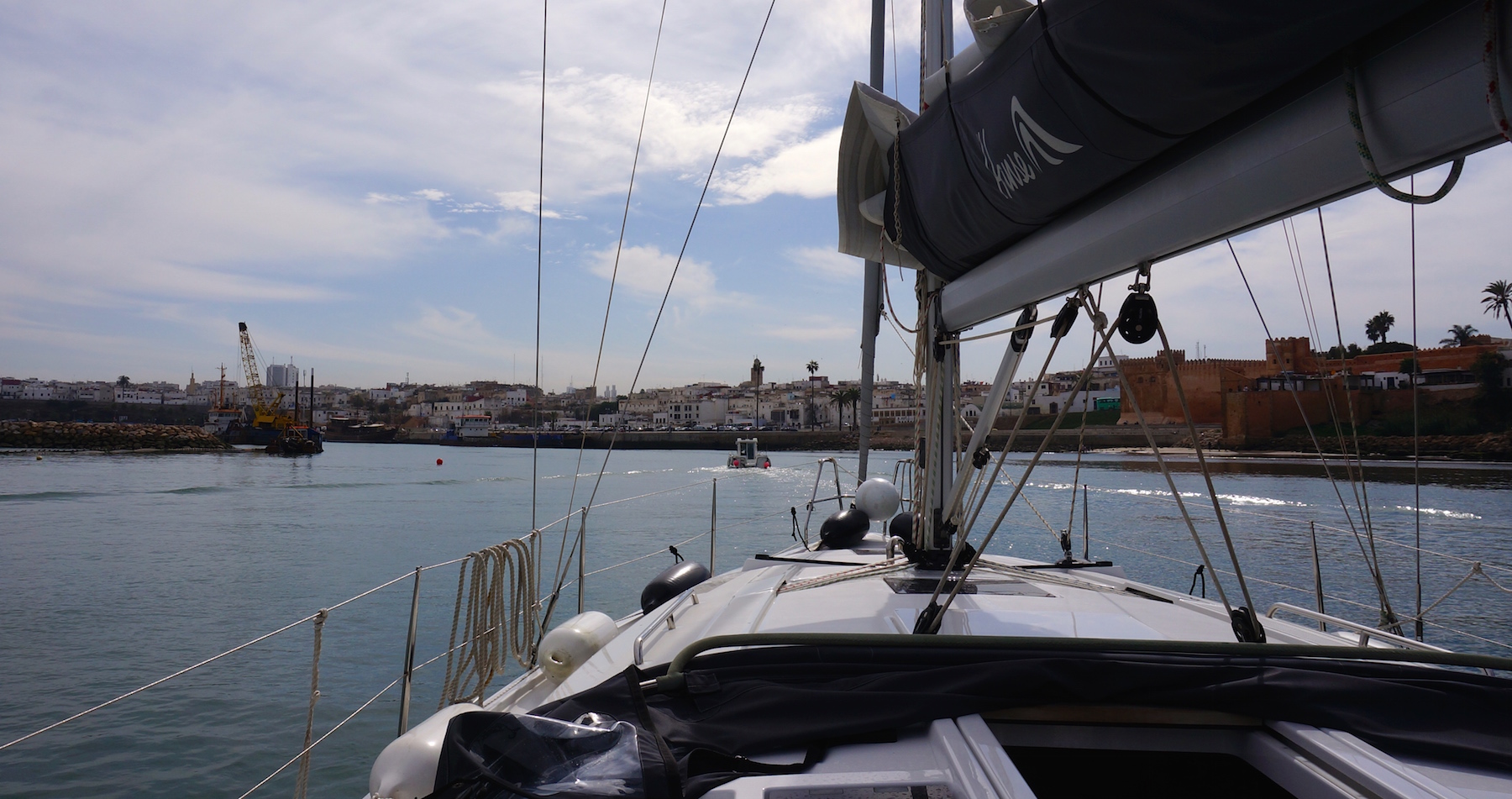 Once safely in the marina, Captain Simon had to meet with various officials and complete lots of paperwork. Our favourite official was the cute sniffer dog. Unfortunately we couldn’t get him on the boat but as he was huge but he was very friendly and allowed us a bit of a cuddle. 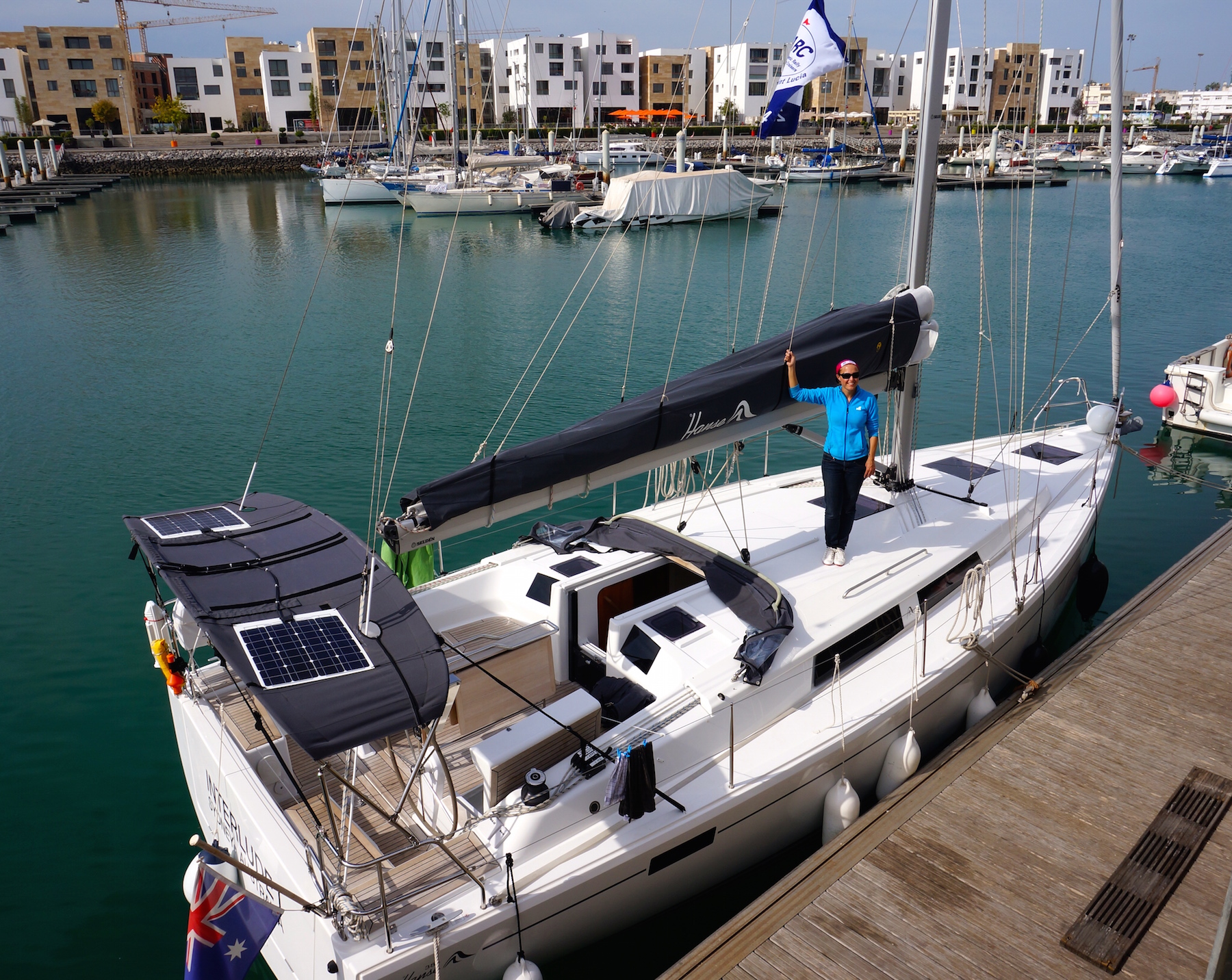 By the time we were docked and washed, it was getting a bit late in the day so we didn’t stray much further than the marina entrance. We did find some time though for my first ever Moroccan tea (described by the locals as Moroccan whisky). This delicious mint tea is laced with honey and is super sweet. It definitely helped to perk me up a bit after a super crazy few days of sailing. 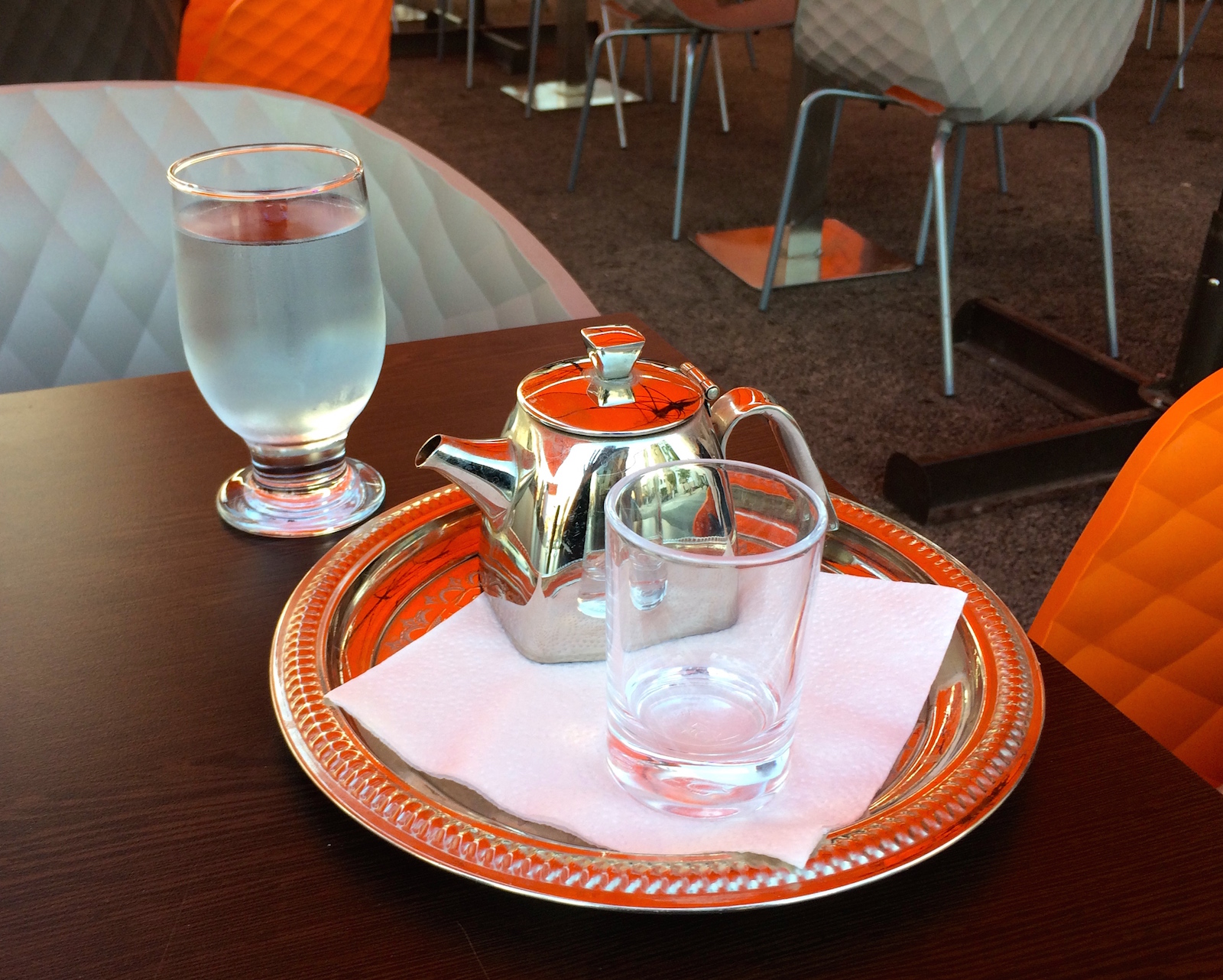 The next day we headed across the river, with the local ferry (a row boat) and into Rabat. 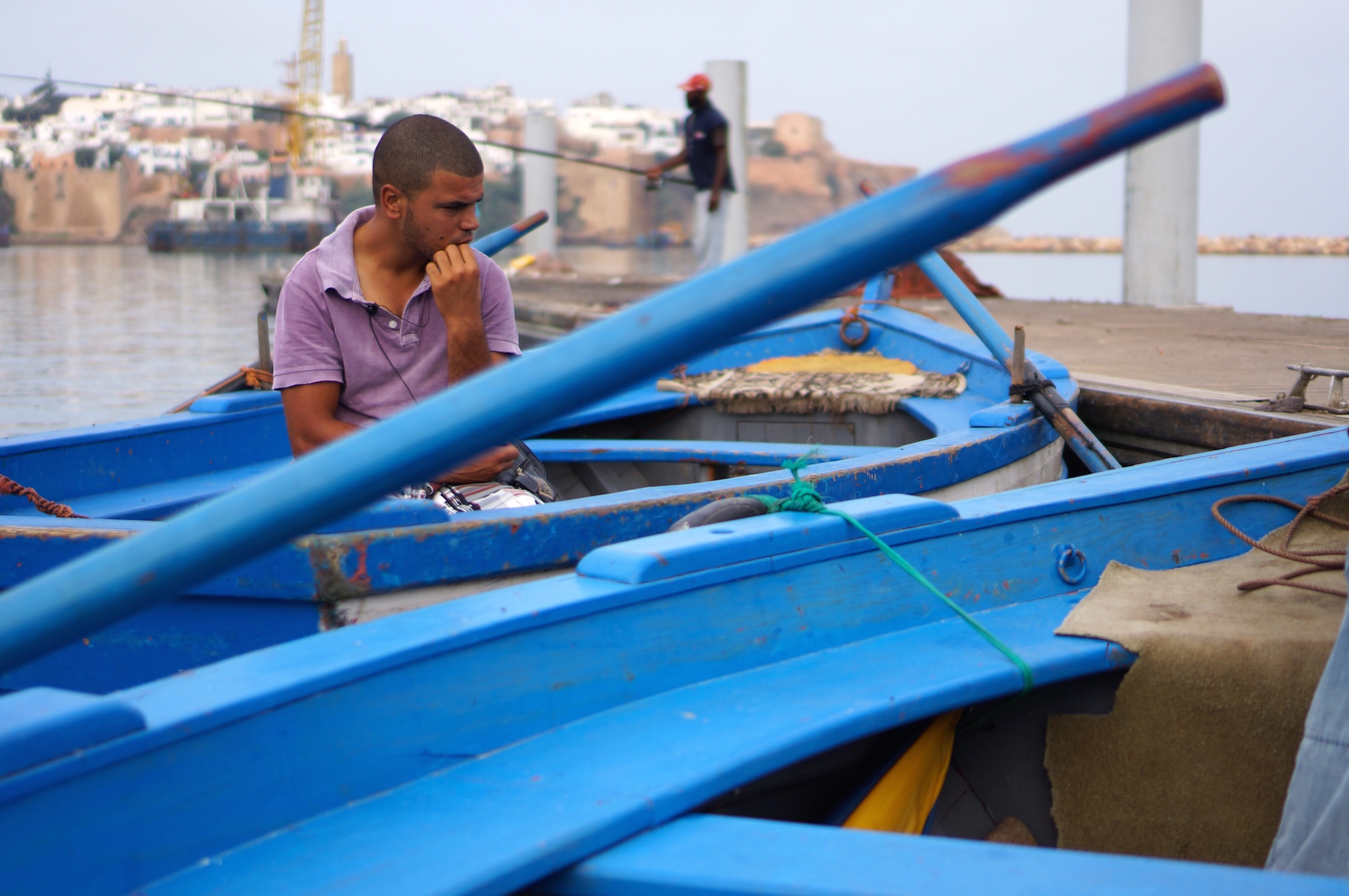 We visited the amazing Kazbah and were shown around by a local guide. He showed us each of the residences (or riads) contained within the walls of the Kazbah. Each riad was designated for a different group of people, (the women, the guards, the surfers or the Royals) and each had their own door knockers describing the inhabitants. 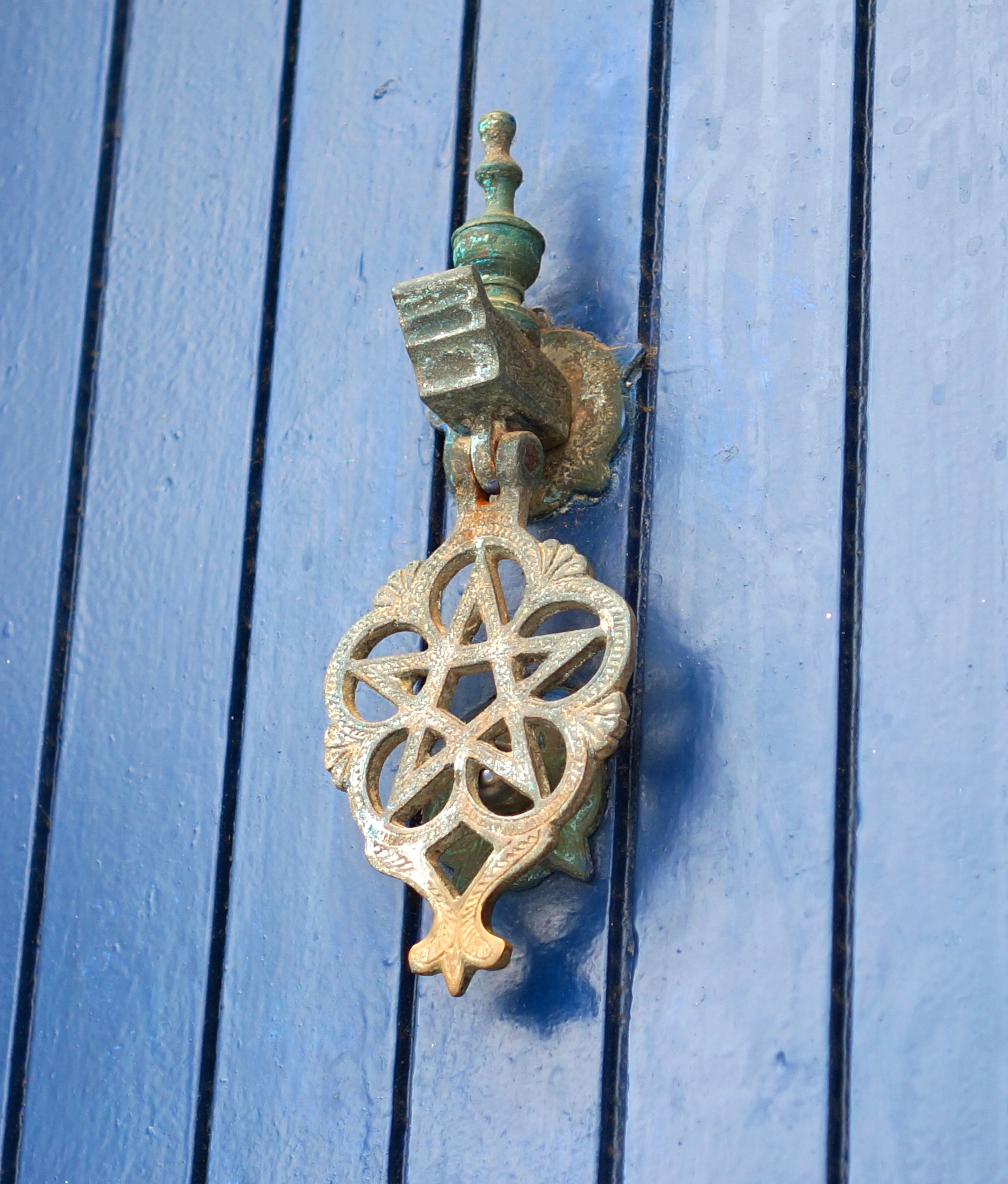 He also took us though the gardens describing the plants grown there including citronella to keep away the mozzies. 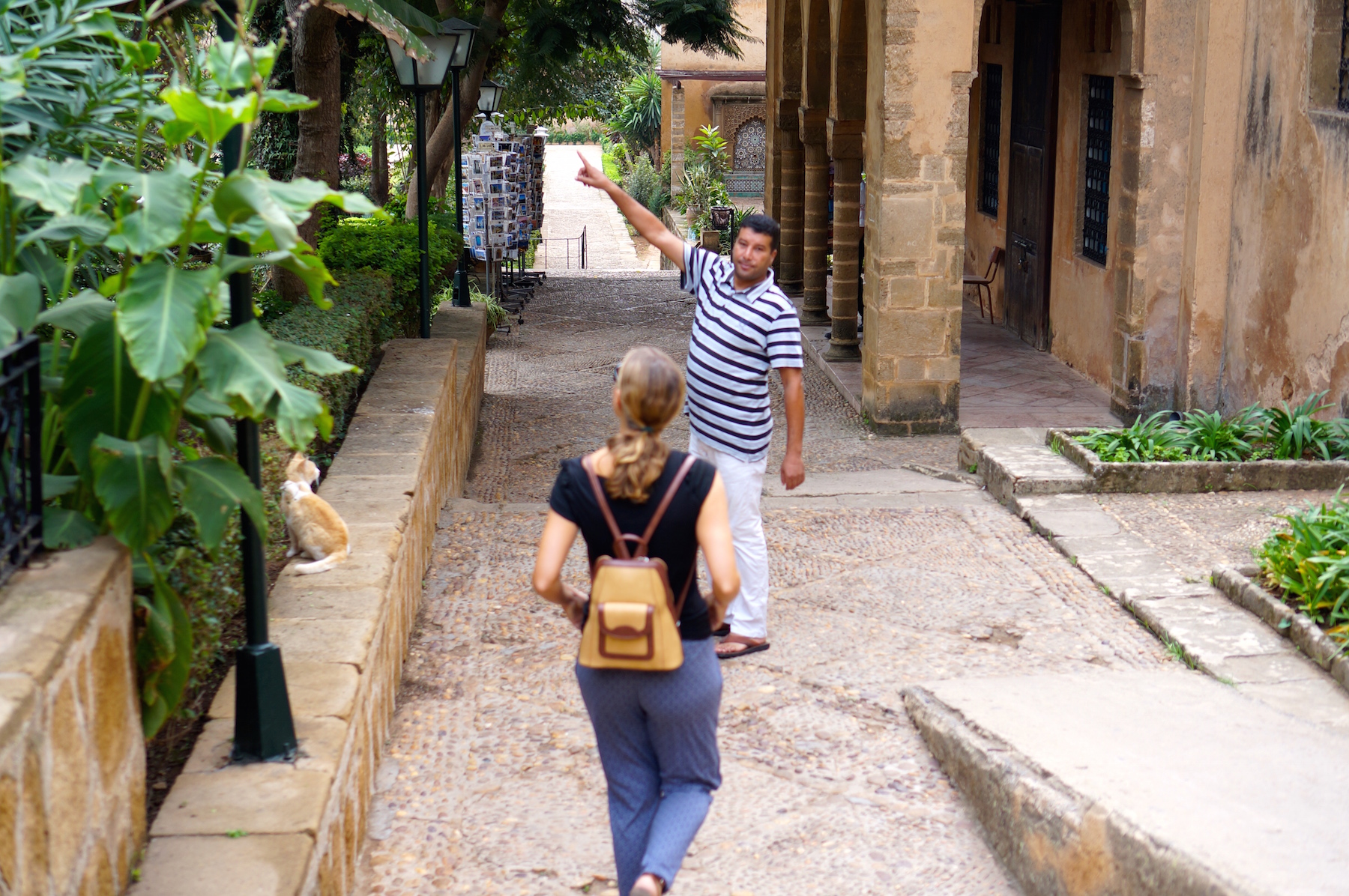 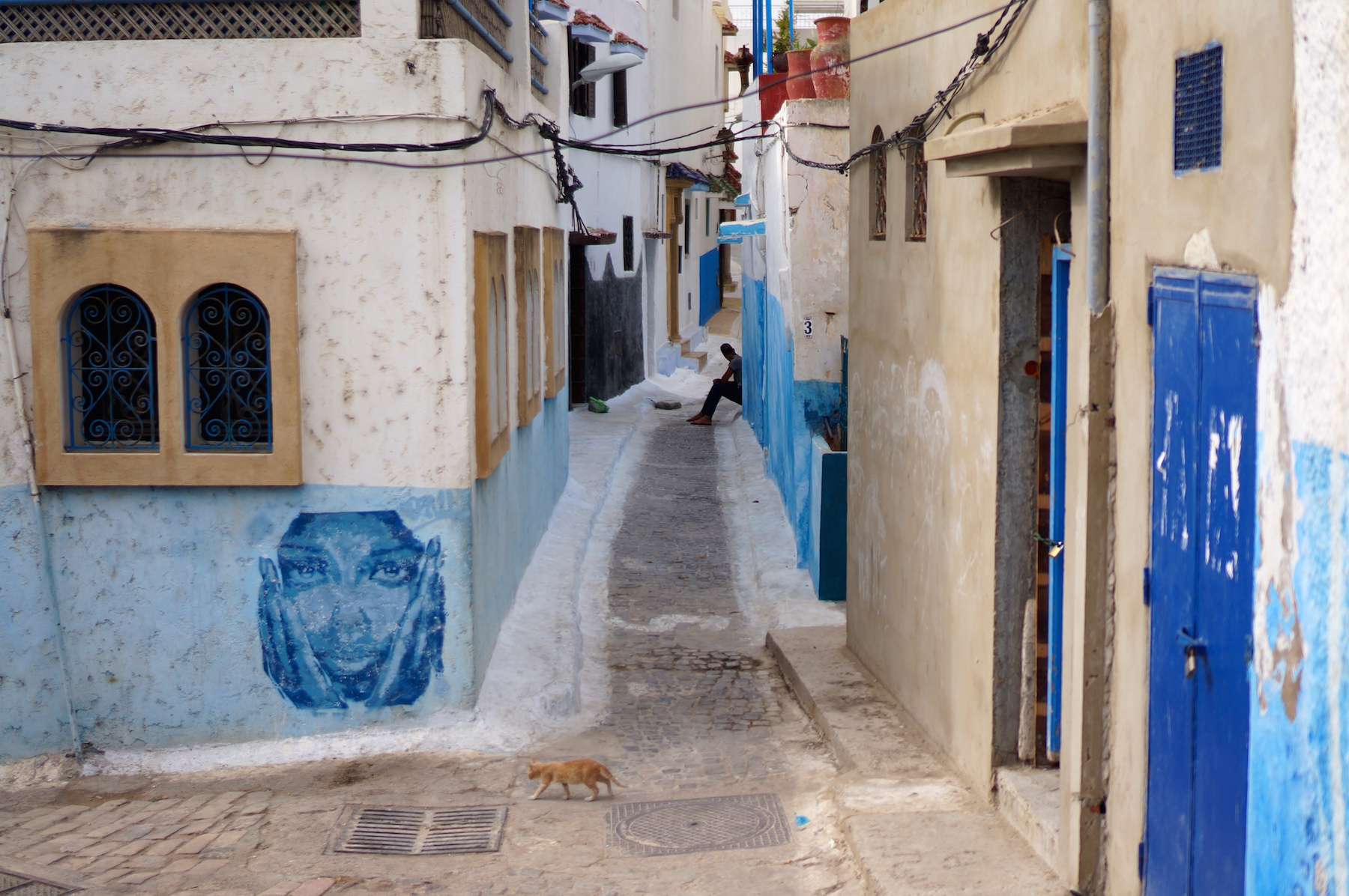 Stupidly we hadn’t agreed a price for our tour up front so we’re pretty sure we paid over the odds for his services, for the money for the guards and whomever else he said he said he had to pay. But in actual fact it didn’t break the bank and you would pay much more to visit the Royal residences in other parts of the world.

The tour ended happily in the tea gardens, which overlooked the river and sold amazing almond cakes with, of course, some more Moroccan tea. This is where the local cats hung out although they weren’t interested in cakes (more for me!) 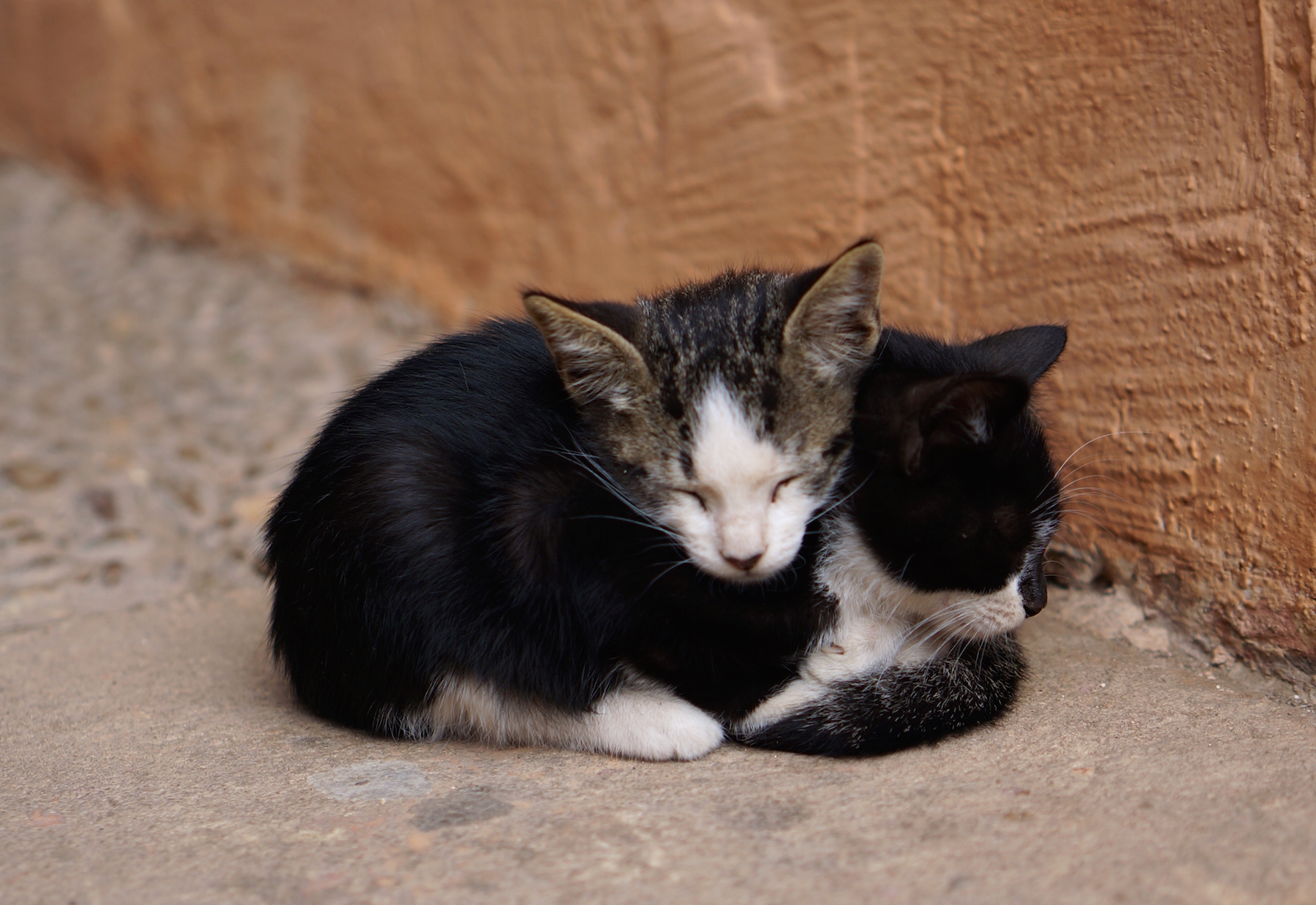 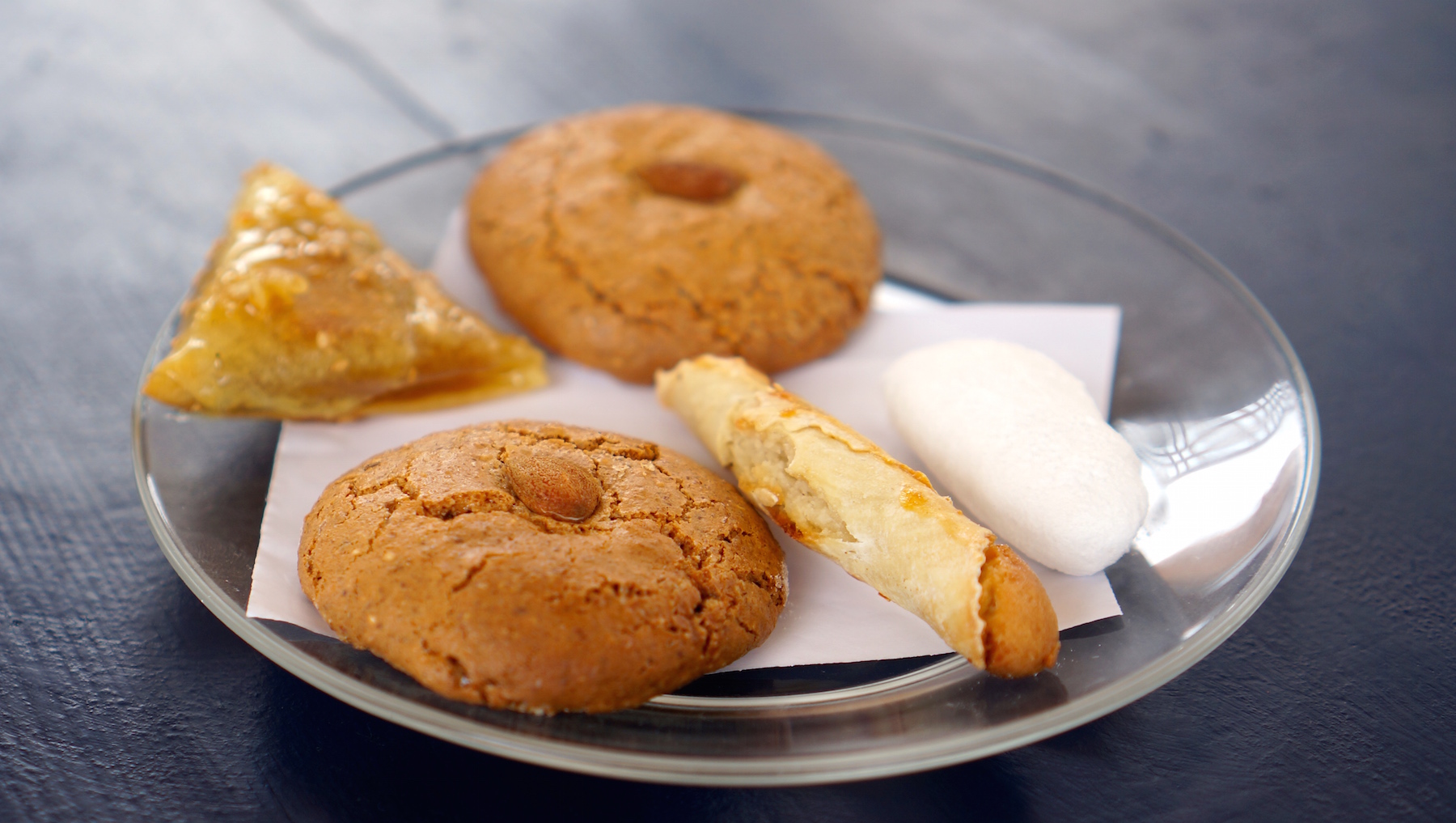 Next we headed into Rabat Medina, where our senses were blasted by the sounds and colours of the market. There were many local crafts for sale, from teapots, clothing, paintings, turtles and everything you could think of. Stopping and looking too closely meant that you were grabbed and strong armed into buying something. We managed to escape… just. 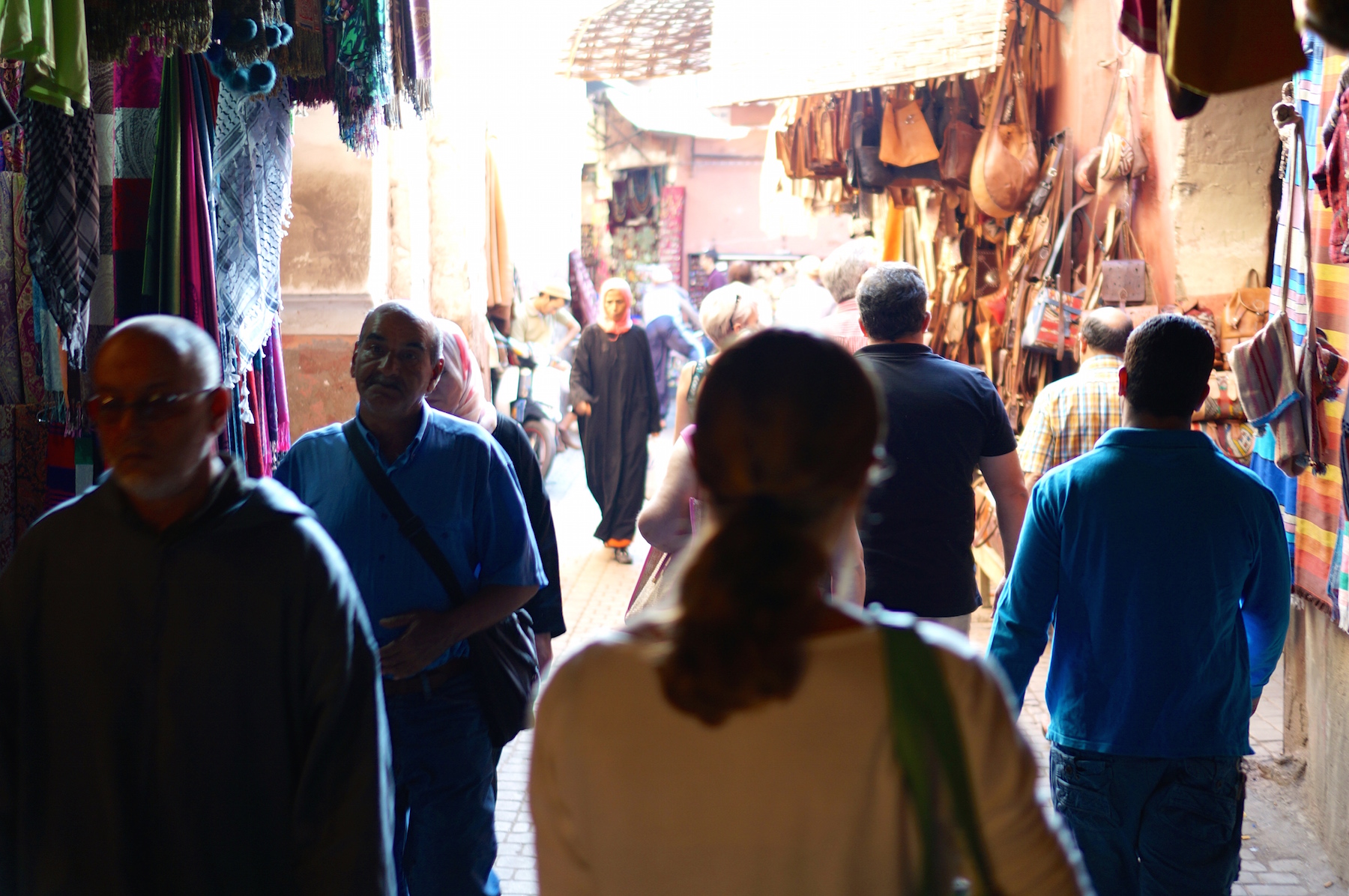 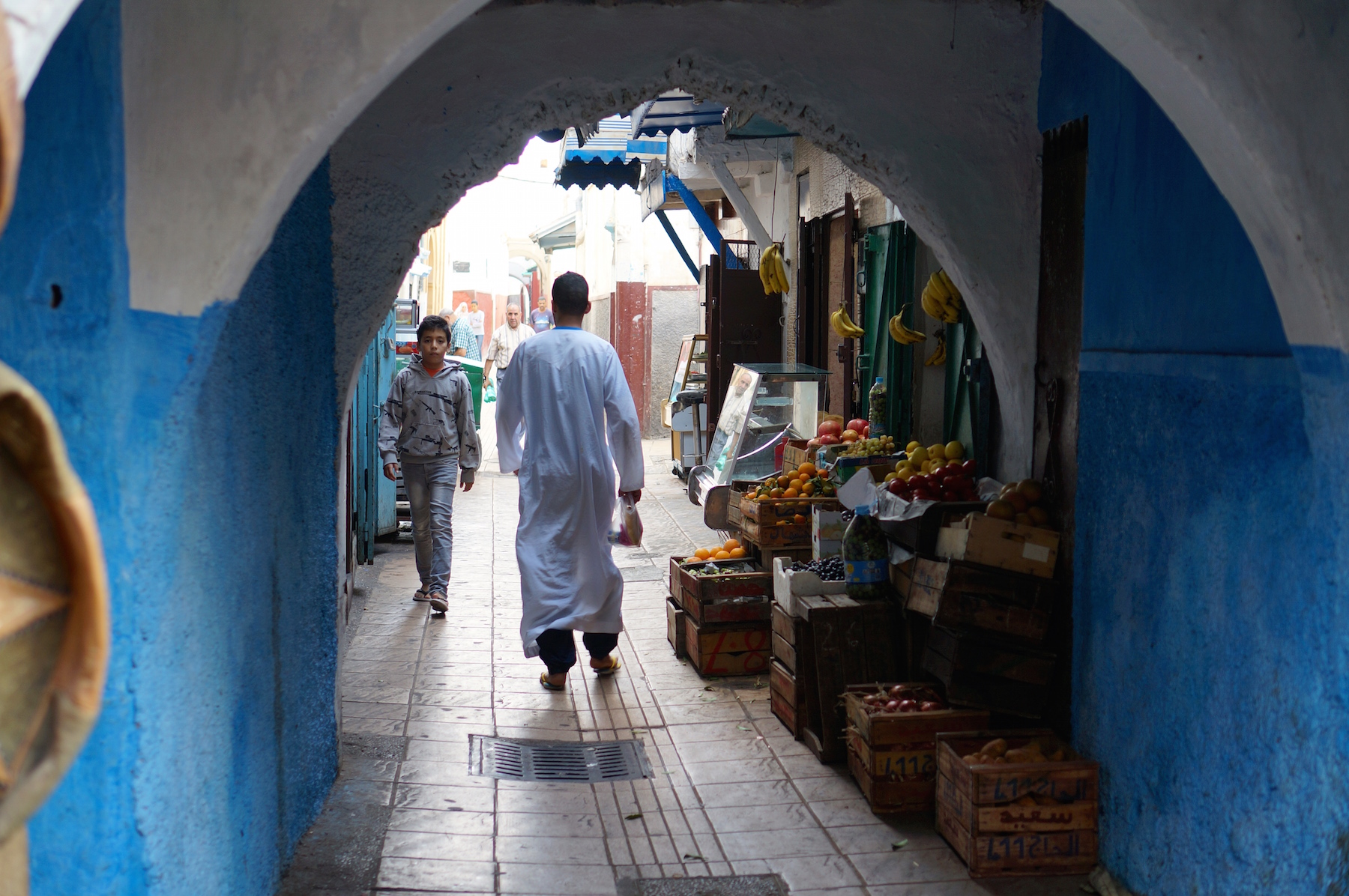 Getting back to the marina we took the super modern tram, a huge contrast to the rest of the town. The marina is close to both the tram stop and the train station, which is where the huge supermarket is located, great for provisioning, and a telecoms store where you can pick up a SIM card for peanuts.

We jumped on the train to Marrakech, a four hour journey so we planned to stay overnight in a hotel. The first time we’ve done this on our trip so it was a bit of a luxury and slightly strange to be leaving poor Interlude. 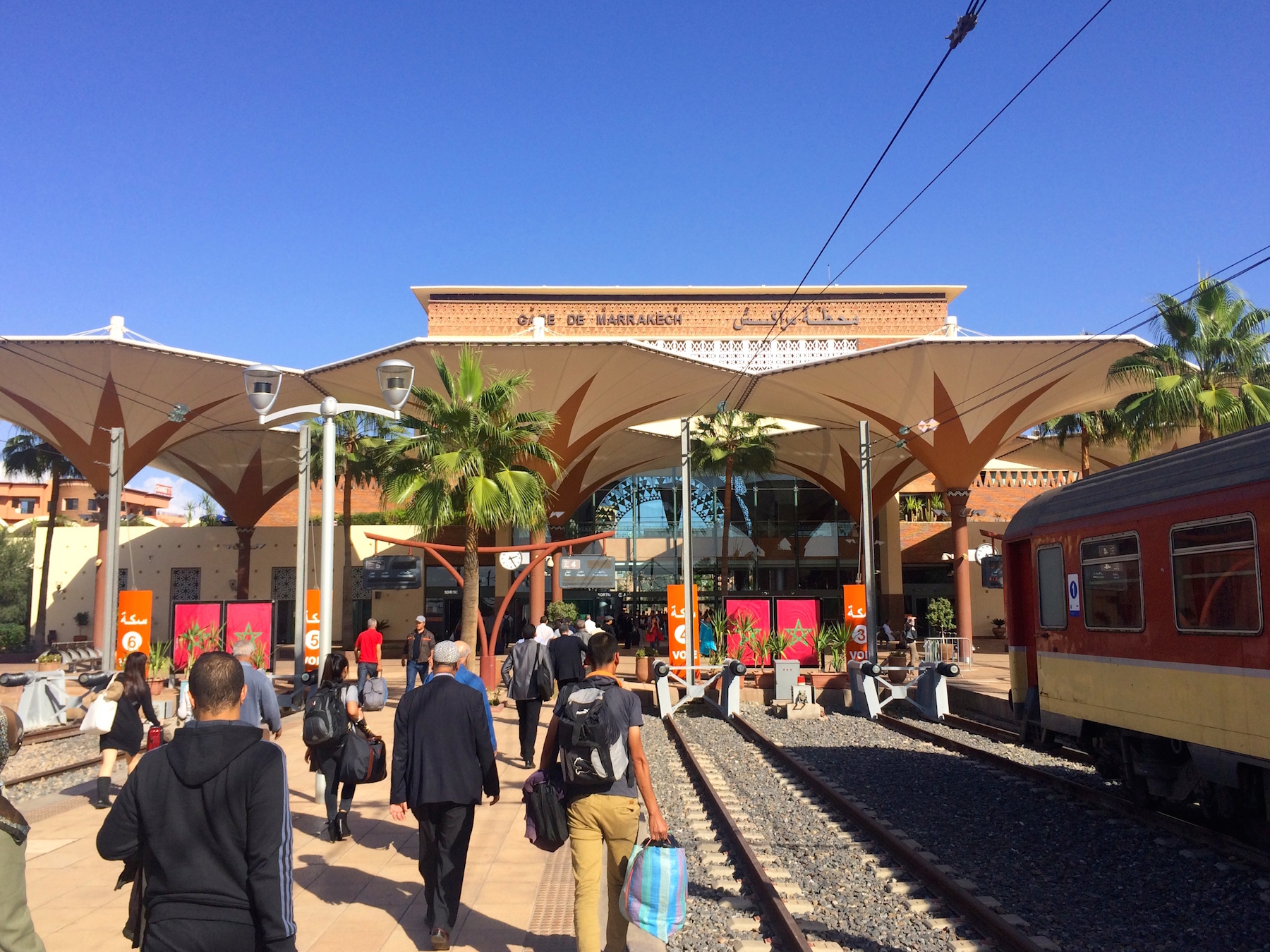 The hotel had arranged for us to be picked up by car from the station as too many guests had got lost on the way – and we were later to find out why. We were welcomed into this friendly Riad by the manageress and served Moroccan tea with almond cakes – I could get used to this! Once we’d dumped our bags in our beautiful room we headed out to explore.

The hotel was in the centre of the Medina, close to everything. The winding laneways were narrow, boarded by high walls, making it slightly claustrophobic. The locals were loud but friendly pointing us in the direction of the “big square”. As we walked the lanes got busier and busier and we were greeted by shop owners and traders who were intent on selling their wares. By the time we reached a “little square” on our way we were exhausted and overwhelmed – this was like Rabat Medina on steroids. We stopped off at a little cafe on the roof top where we sipped tea and relaxed, watching the bartering and shenanigans from a safe distance. From here you could really enjoy the scene without such a sensory overload.

Onwards we went to the “big square” a huge marketplace consisting mainly of food stalls. We had an orange juice and wandered through to the other side. Here in the square was a bizarre collection of entertainers. The snake charmers we had expected. The man with a rope and some eggs? Well we never did find out what that was about.

We got accosted by some men in Fes hats, Simon’s fault for trying to take a photo. We found ourselves in the photo, all in good fun until the camera disappeared somewhere…with someone… We did eventually get it back… for a steep price that wasn’t good enough for the men in hats… and retreated feeling slightly molested and ripped off. We did get some nice photos although you can see the level of concern on my face as three men tried to rob Simon of his cash! 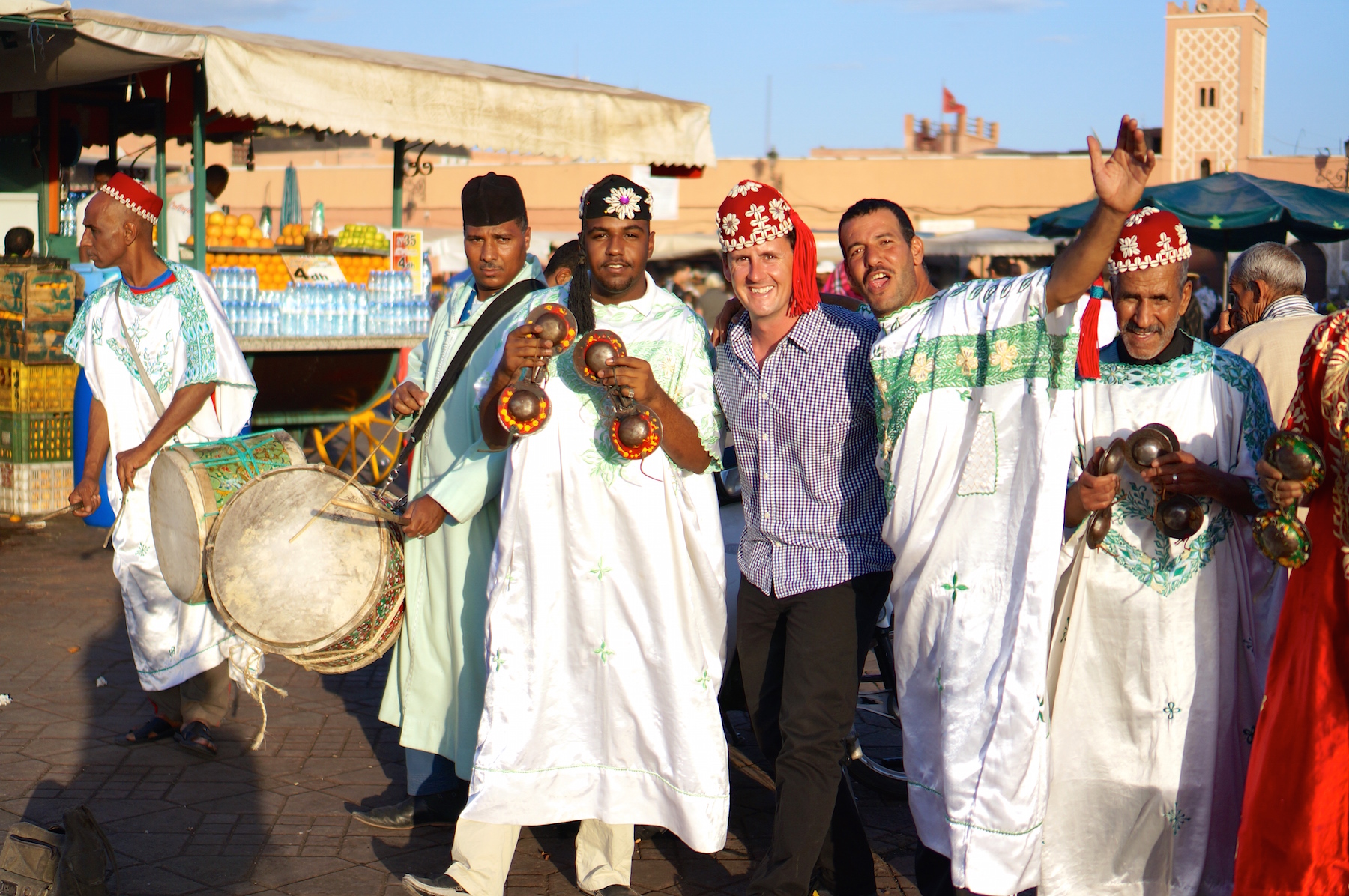 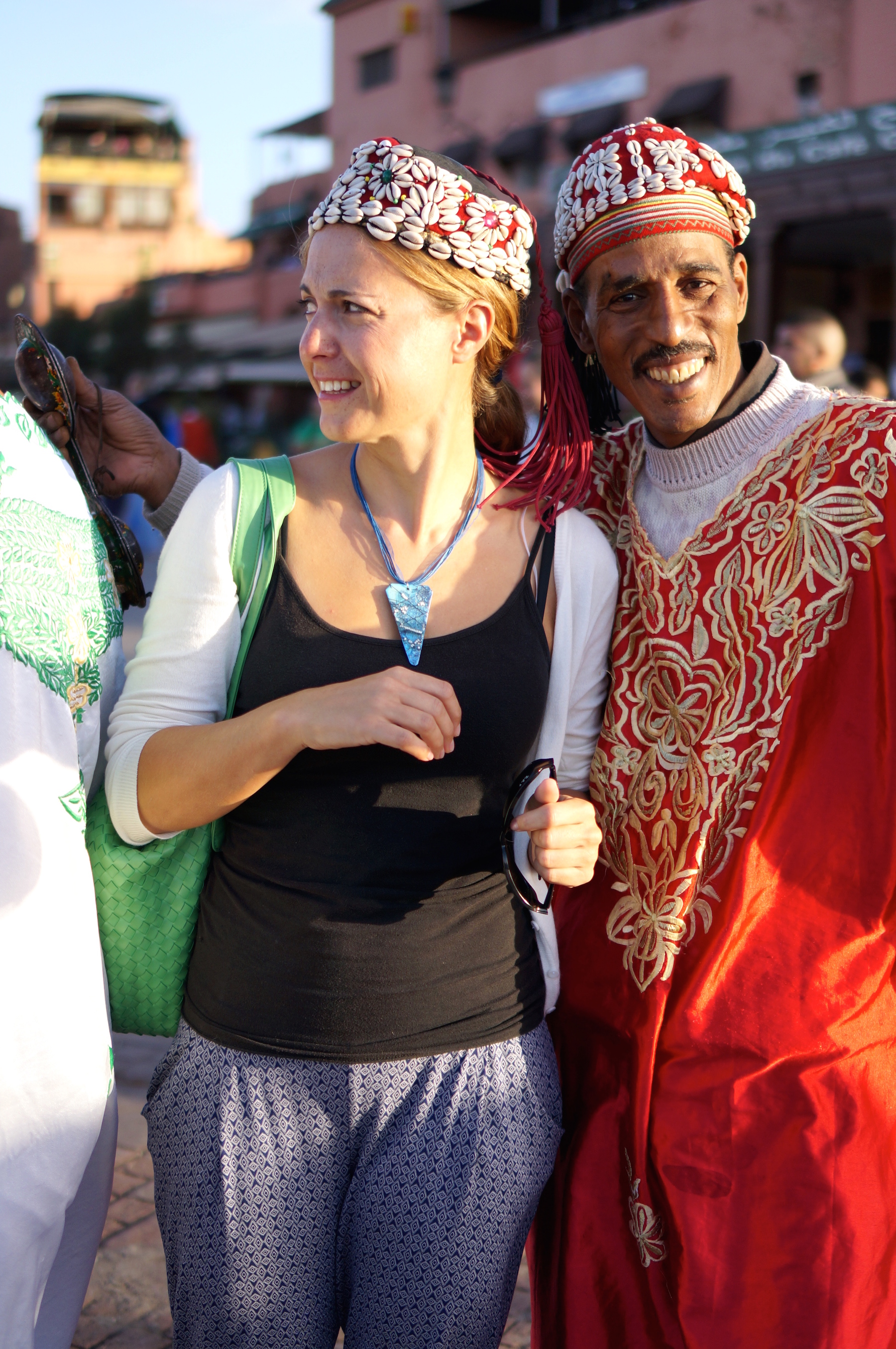 After that we needed another break and some more Moroccan tea so we sought out the Henna Cafe. It’s a little not-for-profit place that trains ladies to cook the food that is served in the cafe and they provide English lessons too. Oh and henna tattoos, unfortunately it was too late in the day for one of them.

We wanted to see the square at night and so walked back that way. WOW it truly comes alive at night and has an amazing atmosphere. We wandered around before getting some dinner at one of the many restaurants overlooking the square. The lemon chicken was yummy. 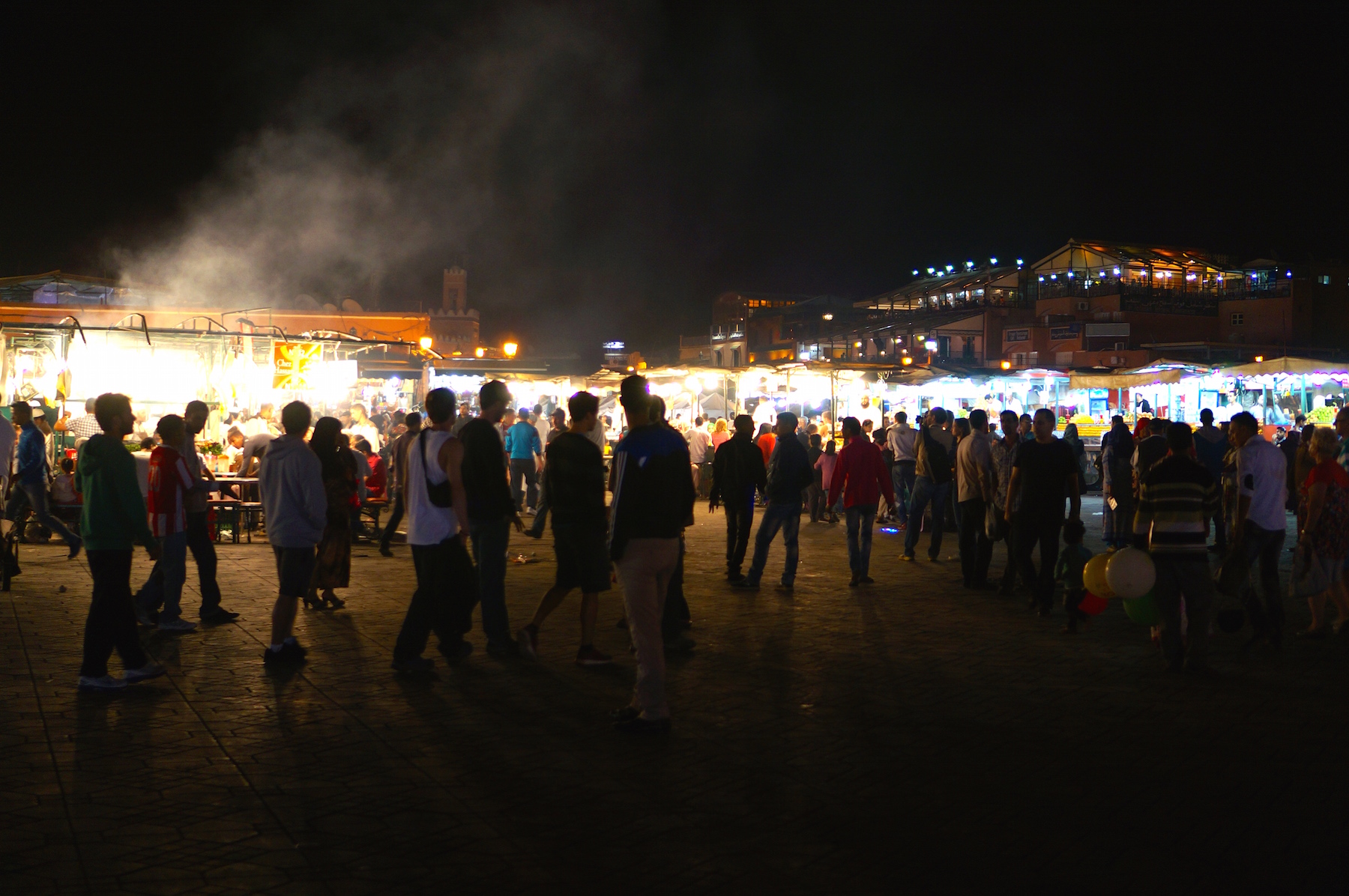 Getting back from the square to the hotel was … somewhat difficult. The laneways of the medina took on a new persona, like a strange Tim Burton movie. The ‘gates’ close at 9pm so we were keen to get through, otherwise we’d have to walk all the way back and get a cab. We rushed through the markets hitting one dead end after another before finally spilling out into the quieter streets beyond. Here people pointed us this way and that, some helpful soles others demanding a fee. Then there were the groups of children of all ages beating drums, throwing fire crackers and generally running amuck. In the darkness it seemed surreal and more and more sinister. We weren’t the only ones lost, in fact the nice couple who lent us a map, were later seen wandering around with the same dazed and confused look on their faces. Finally, finally we landed on the doorstep of the familiar riad, after a nice young gent pointed the way… and then kindly offered us drugs. Yep it’s a crazy place!

We were very glad to be returned safely to our room and now truly understand the term ‘medina meltdown’, yes we both suffered one of those!

Next day we were torn with the idea of staying longer in Marrakech, heading straight back to Rabat or stopping off in Casablanca. Casablanca won out in the end but it was a close call.

After landing at our hastily booked hotel we headed out into the streets of this town, a big business centre. We dodged the medina, we just still weren’t ready for that and mooched around the streets in the rain to take in the surroundings. Then after consulting with trusty TripAdvisor we headed to a nearby museum (Musee Abderrahman Slaoui). It’s actually a private collection and included some amazing posters of a bygone year. Imagine Tallouse Lautrec crossed with the titanic poster and add a little Moroccan twist. 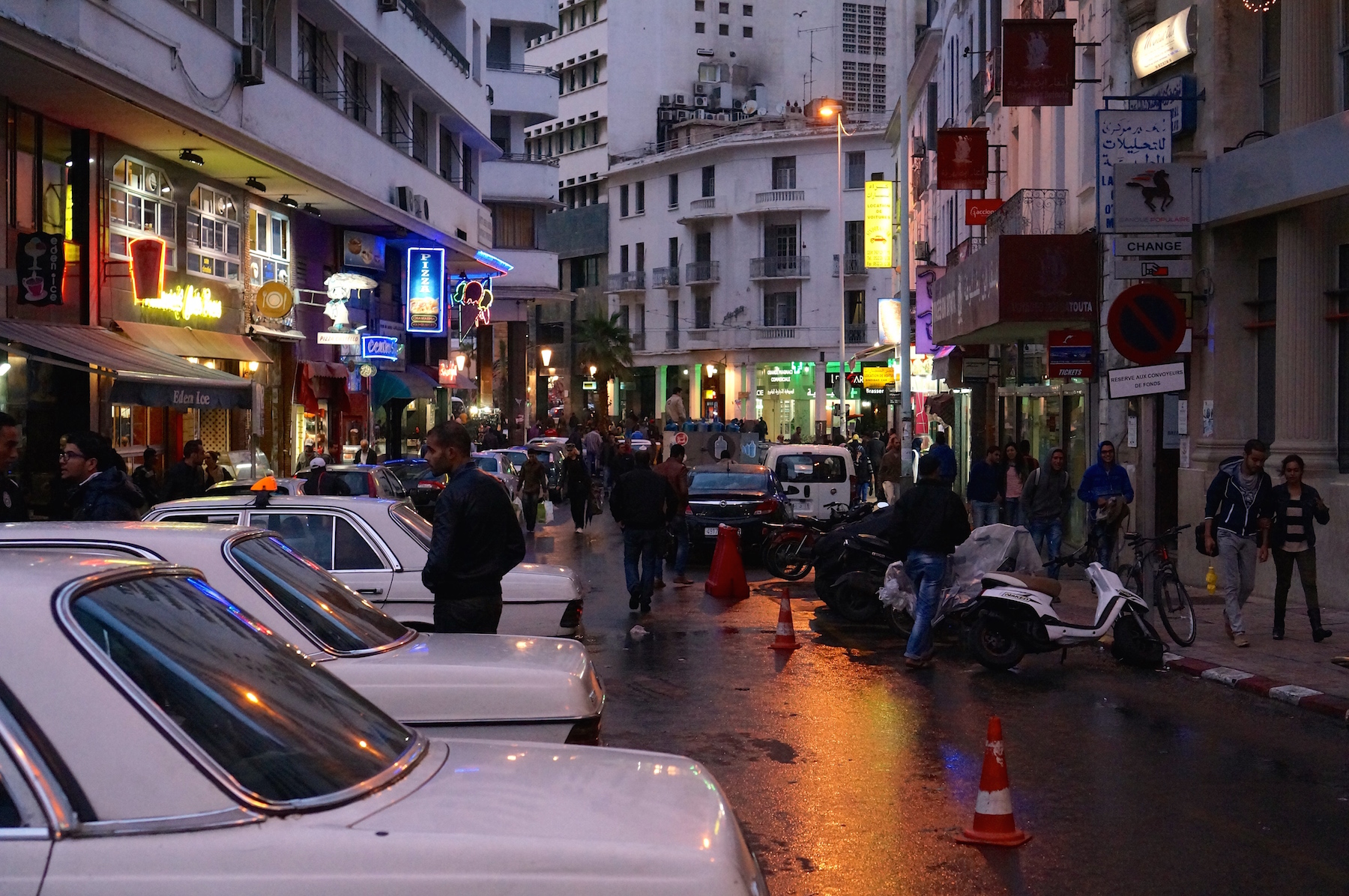 We’d watched the film Casablanca a few nights ago in Gibraltar and had heard of a restaurant that has been created based on the film, called Ricks. It’s got some good reviews so we dropped by. We weren’t sure what to expect and was dreading something trashy, but it was fantastic, great ambience, amazing food and live piano. Quite beautiful! 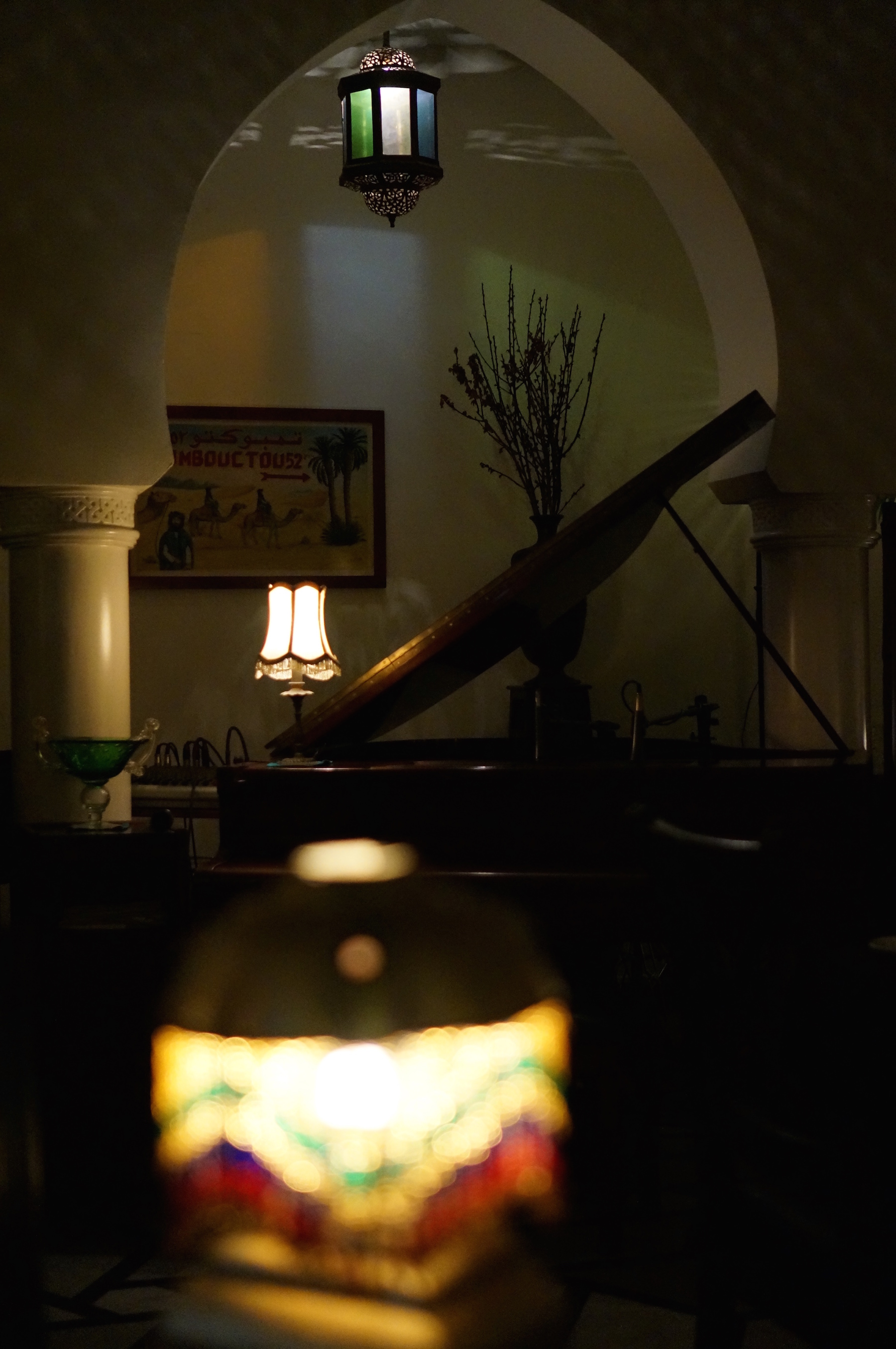 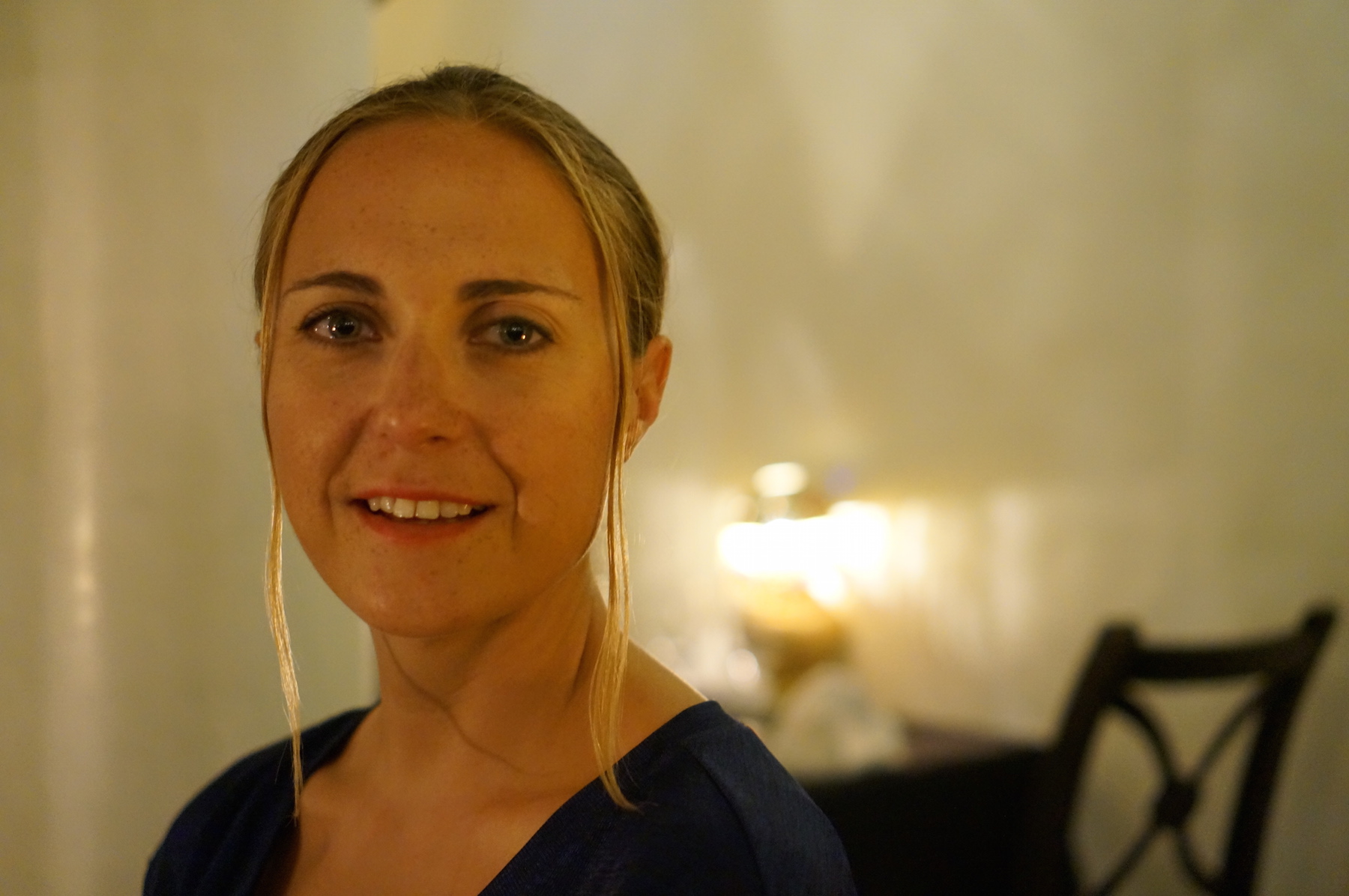 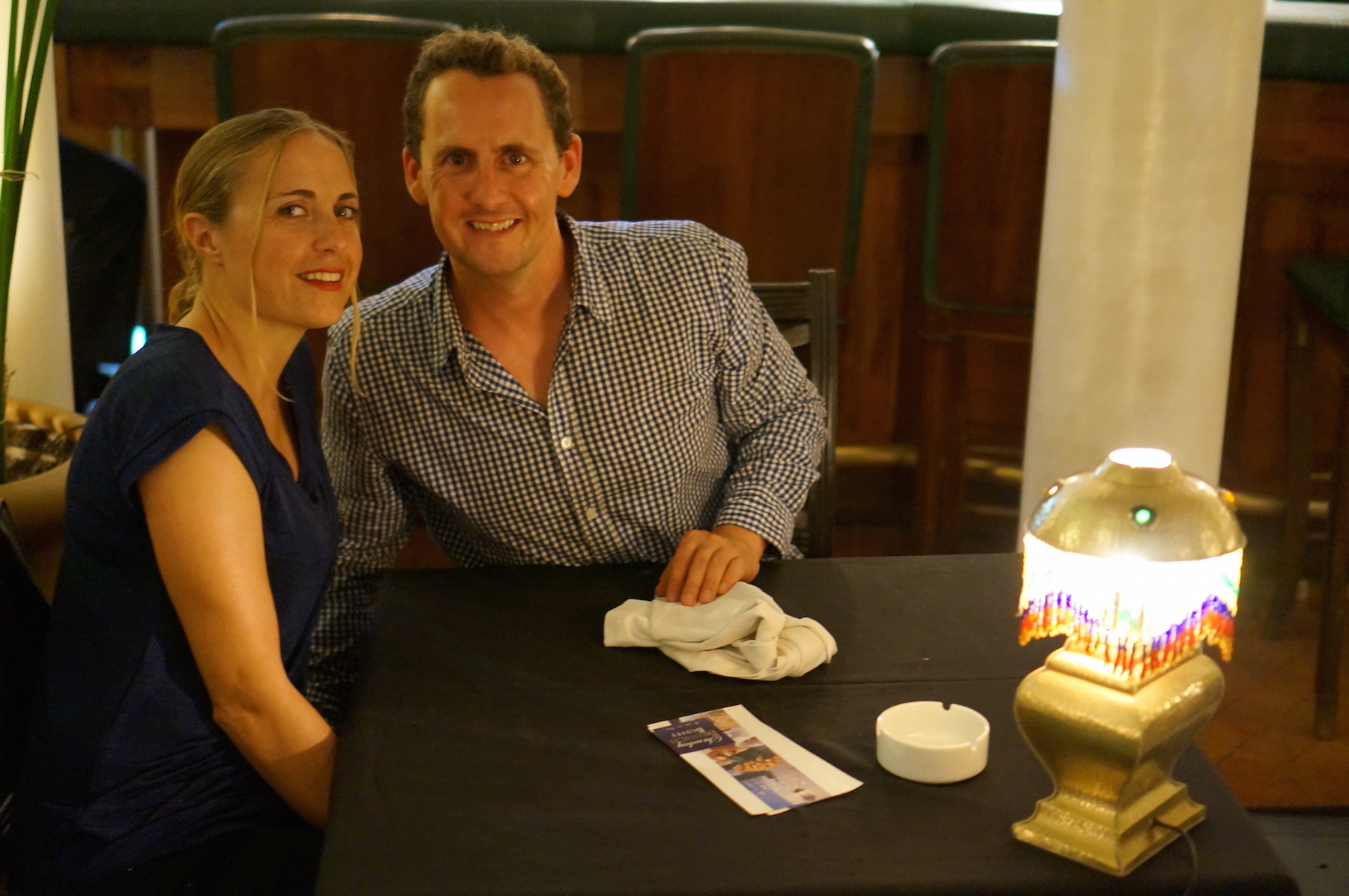 First thing first we had to make it out of the marina. There were eight boats waiting in the end but we couldn’t leave before we’d been cleared out and checked by customs. We were also waiting for high tide which came and went. Eventually the pilot took the skippers out to check the entrance, and then there was a flurry of activity by customs and the other officials before we finally set sail… well at least five of us. 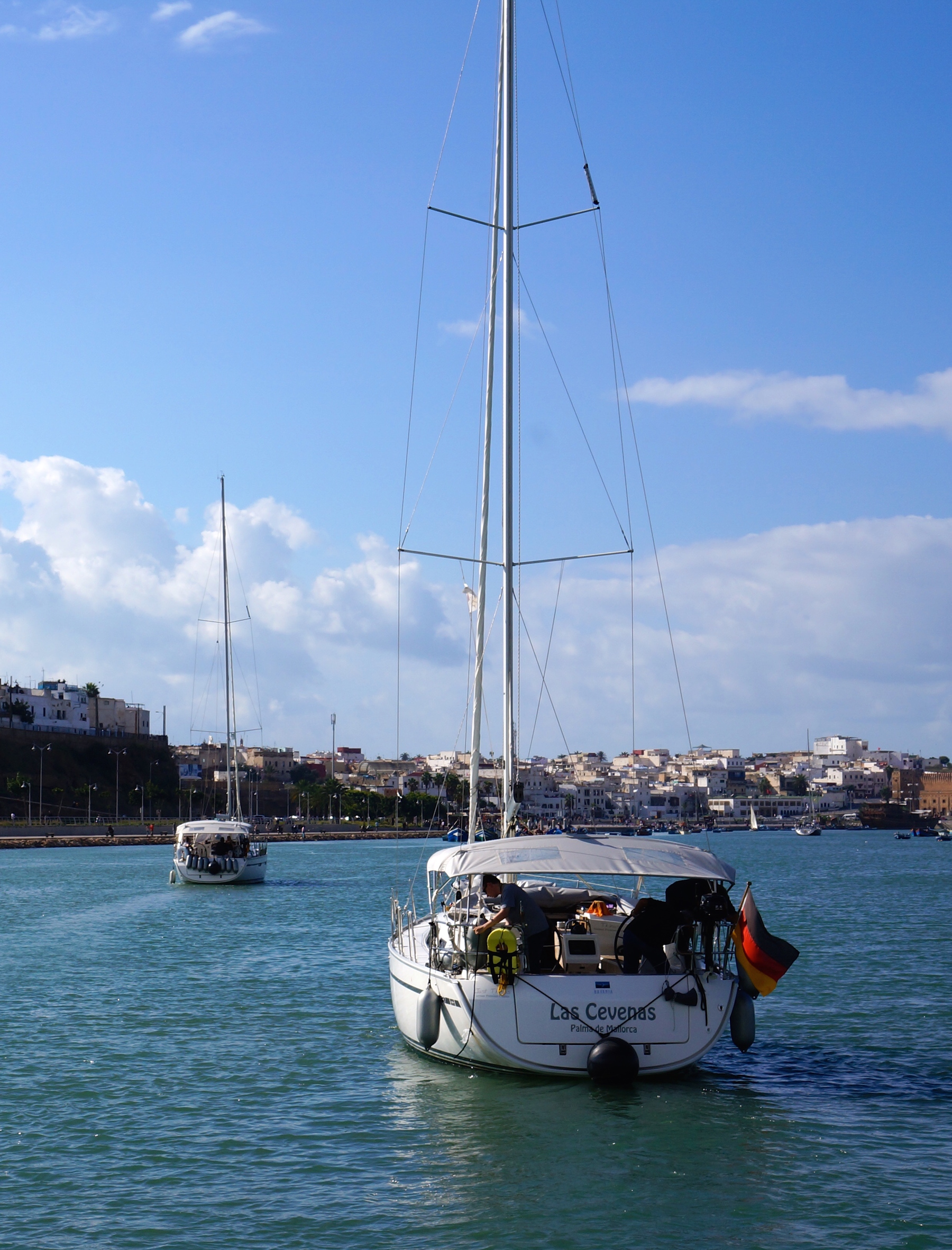 The others were stuck in the marina trying to negotiate fuel on a holiday, when there were a large boat on the fuel dock – oops!

We did see on AIS that they’d finally made it out.  Darkness fell and one after another the boats succumbed to fishing nets. A fishing boat would turn up out of the blue and shine a light directly into your eyes while screaming and shouting. This mean’t that you were about to hit a fishing net and needed to alter course. Which direction wasn’t clear so we ended up doing lots of donuts.

The fishing nets went on for miles… and miles taking us in the wrong direction. Twice we got caught on nets and had to unhook ourselves, loosing and retrieving the boat hook in the progress. We were not alone though, as we heard that the other boats were having the same problem, and in fact one of the skippers called us up to warn us. Eventually we all headed out to sea and that eventually solved that problem.