Getting to New Caledonia was a bit of a race. The usual trio set off together; Whale and the Bird, Pied-a-Mer and ourselves.

Pied-a-Mer set off early and, after a tussle with a mooring line, got off to a good start. They also took the closest passage through the reef, giving them a better sailing angle. Damn it!

We, along with Whale and the Bird, decided to retrace our track through the lower Malolo pass, figuring if we’d made it in that way in the dark, coming back out that way in daylight would be a piece of cake – and for us it was. However the seas were churning like the inside of a witches cauldron and it really made us realise how crazy it was coming in that way in the dark. Oh well as they say ‘He who dares wins’.

We were just congratulating ourselves on exiting the pass when I looked back and saw Whale and the Bird hoisting their sail. That mean’t one of two things: either the race really was on or something had gone wrong. Simon got on the blower and found out their engine was leaking coolant and so they would be sailing the rest of the way out of the pass. We swiftly made some space as they shot past us, leaving us for dead. Luckily the wind was in the right direction to sail out of the pass and they were able to fix the leak, and so all was good in the hood. It must of been a bit hairy for them and we can totally sympathise after similar incidents.

The rest of the day passed without any drama. We saw another two sailboats on AIS – it’s always nice to know there are others around.

The following day as is was getting dark, one of the other boats, ‘Amazing Grace’, called up Whale and the Bird to ask them ‘what their intentions were’. Well as you’d expect they were planning to continue on the same course that we had been since leaving the pass – straight along the rhumb line towards New Caledonia. However Amazing Grace didn’t like this idea and wanted them to leave more room. Onboard Interlude we thought this was a bit rude, seeing as there was a five-mile gap between us and Whale and the Bird we were unsure why they would be unable to sail their four-meter boat between us.

Their complaint? There was plenty of sea around so why did they need to be so close to him. Pete put it politely when he told them that they’d ‘just sailed in the middle of three boats travelling together’. Amazing Grace? More like Amazing Disgrace!

Funny thing is he was travelling much faster than us and was gone before we knew it. Ahh well there’s never enough entertainment in the middle of an ocean! 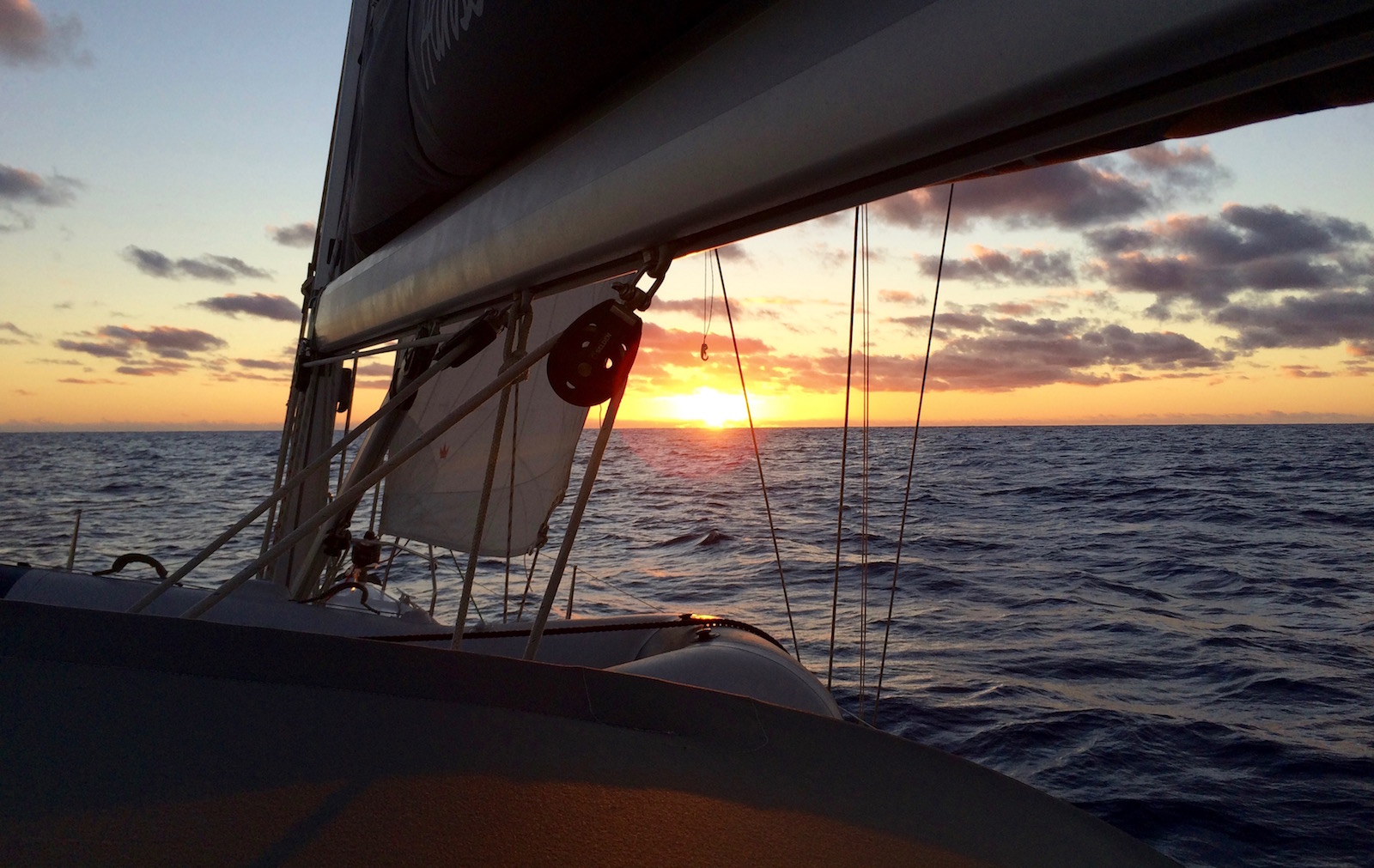 From there on in it was just the usual sailing, ocean, sky and a few little triangles on the horizon marking our friends in the distance. For some reason we pulled ahead, so eventually even the sails disappeared leaving just us and the birds for company. We still stayed in radio range and as always it was good to chat.

We were trying to time the Havannah pass during daylight hours. We figured we’d pushed our luck with the reefs at night and really didn’t want to tempt fate. Luckily we arrived in the early hours of the morning which mean’t that we could get through the pass at slack tide, at dawn which we’d calculated to be 5am.

Unfortunately we’d caught up with our ‘friends’ Amazing Grace and the boat they were travelling with Amandla as they were sailing at a lower speed. We heard them chatting and they said they would be going through the pass at 7am boat time. Whatever the heck that means.

As we wanted to pass through earlier, we called them up to let them know what our intentions were. Simon asked when they would be going through (7am) and what they meant by boat time (the time on their boat). Doh! He informed them that we were planning on going earlier to which he simply grunted. Joy!

So I put on our engine and forged ahead while Simon went to get some shut-eye. Next thing I know they’d increased their speed, obviously tanking their engines now and were cutting us off at the pass! Quite literally!

So I got Simon on deck who was none-too-pleased and as we were trying to figure out what to do another AIS target popped up on screen. This was a tanker heading towards the pass from the North. We didn’t want to play chicken with a tanker so we reduced our speed and pulled over to let it through. Next thing we know the tanker calls up and asks our ‘friends’ to make room. I guess there’s always a bigger bully in the playground.

By the time we all made it through the pass it was well past 5am and possibly past 7am boat time – who’d know? So much for good planning!!  The pass was a bit swirly and choppy but we made it through just fine and were followed closely behind by Whale and the Bird and Pied-a-Mer without drama. 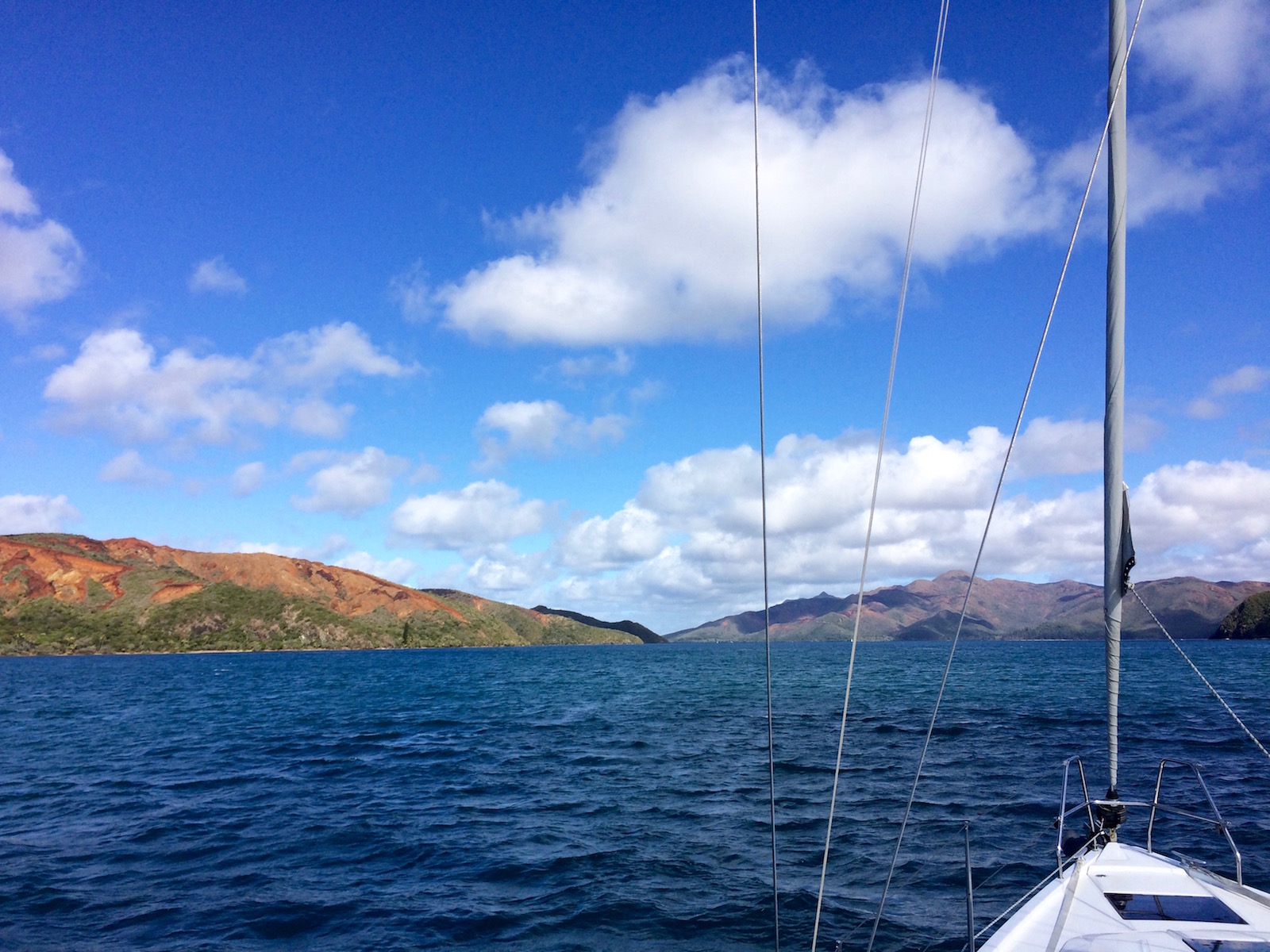 At the end of a trip like this its always good to find yourself in a cosy marina and fortunately there was a spot available for us. However it was the last one which mean’t our buddy boats were left out in a busy anchorage trying to negotiate a spot between all the moorings. I guess we didn’t realise the prize for this particular race was a marina berth. Amazing Grace and Amandla had just won gold and silver. Even though we’d got bronze it made us feel pretty bad knowing our friends were out there and it was set to get windy. 🙁

What’s the deal with this marina? They let you come and check in but only with a three-day maximum stay which mean’t that we would be out on our ear with the wind picking up in just a few days. So we checked in as quickly as we could and rushed around to the supermarkets to provision after a week at sea. 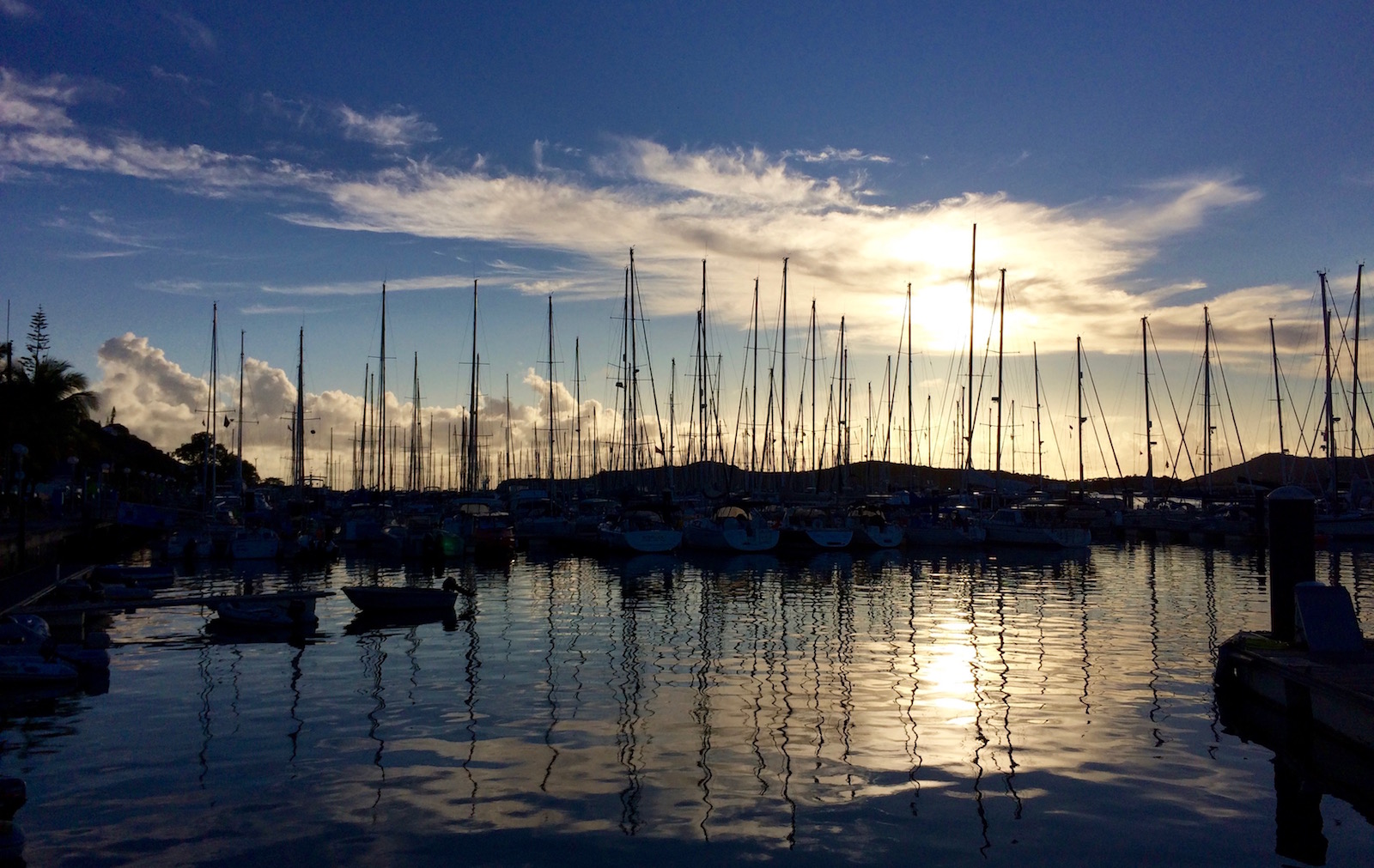 After that it was time for some retail therapy. This is the first place in a long time thats had ‘real’ shopping so we decided to make the most of it and bought… well not a lot actually. But it was fun all the same.

New Caledonia is yet another French island and is similar to some of the others we’ve been to like Martinique or French Polynesia but is also really reminiscent of Papeete in Tahiti – which is great because we loved that place.

After three days in the marina we started to worry. Boats came in with stories of 30 knot winds in the anchorages and islands outside. But we kept our heads down and nobody asked us to move. Actually we found out a lot of cruisers had been their for a while and there were plenty of ‘the dog ate my homework’ excuses to stop them moving including wonky engines, missing rudders and injured legs. I won’t name and shame people but you know who you are!!

It was not only windy but cloudy, and rainy from time to time too. This mean’t that instead of sun-baking on the beach and snorkelling in aqua waters of the islands, we spent our time wandering around the town.

Ok not cloudy and rainy all the time… 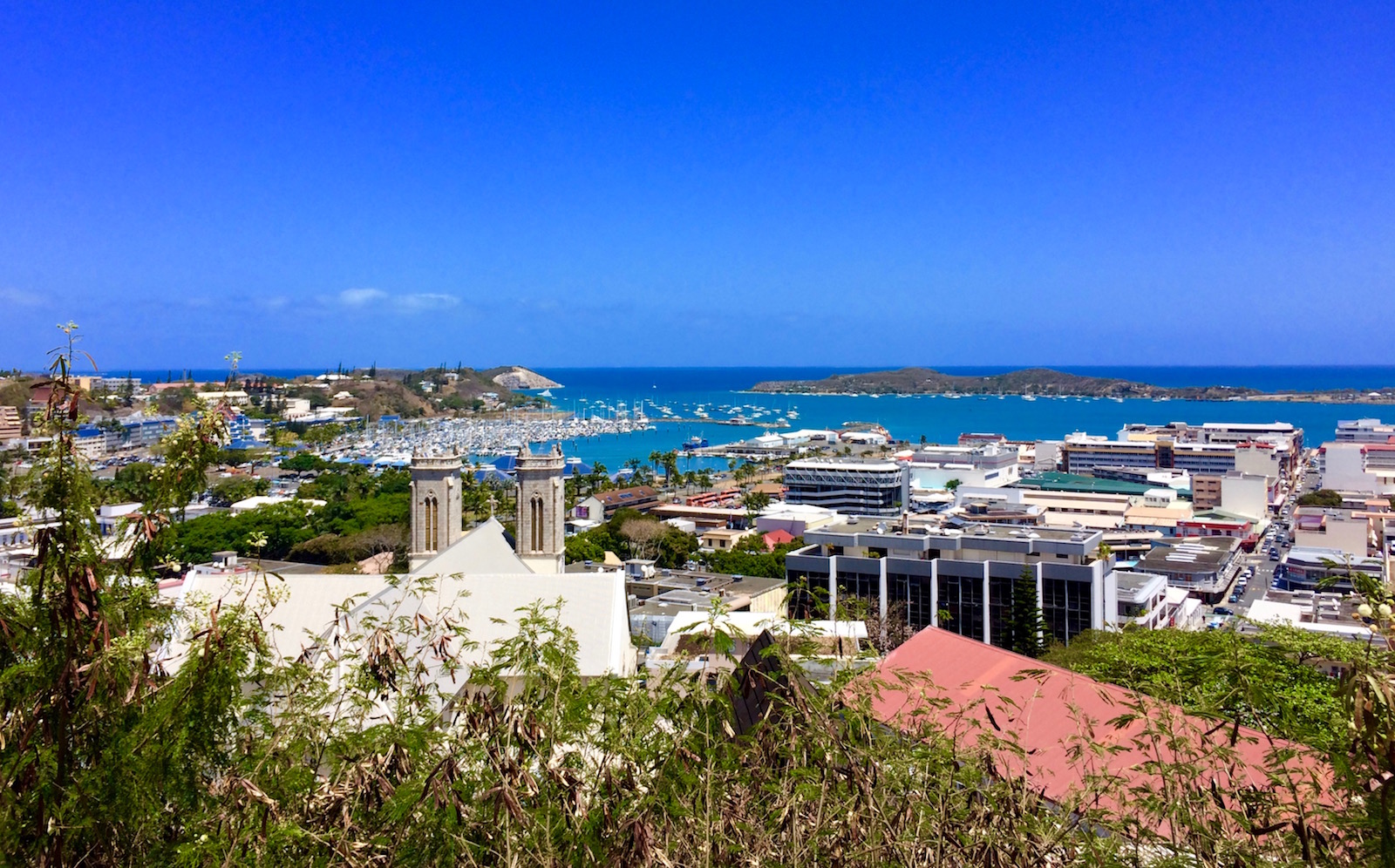 We eventually made our way into the museum of New Caledonia, a well presented little museum. It was a great summary of all our cultural experiences across the pacific but didn’t really tell us anything new.

Another day we made the long walk down to the beach at Baie des Citrons. It was a pleasant stroll around the harbour side and along the promenade with the usual skinny french belles jogging off their morning croissants.

There’s a lovely town beach full of families basking in the sun but before long it clouded over and everyone headed to the shelter of the bars and restaurants that lined the street. We were only too pleased to find ‘the Three Brasseurs’ bar, our Papeete favourite, and popped in for a special brew. 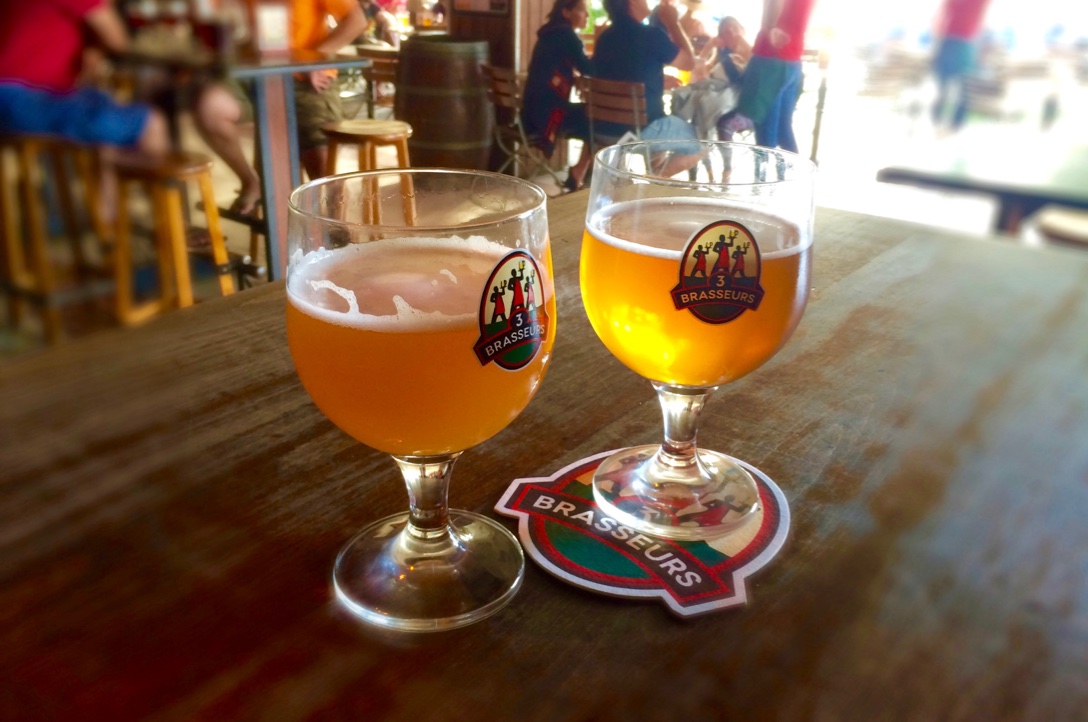 After that we headed to “le Petite Bistrode” for a delicious meal.

Our favourite lunch place however was l’Annexe. Set in the park, it had an amazing three-course lunch menu that changed daily. So we had to try at least a couple 🙂 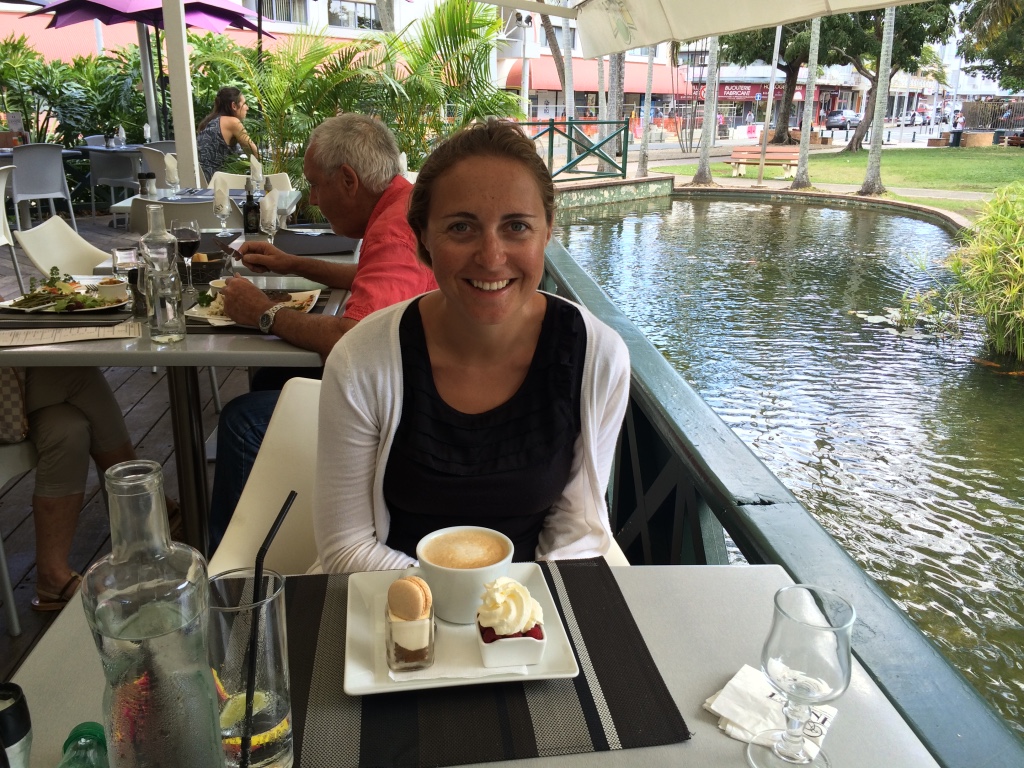 We also found delicious food at another place close to the marina called L’Inedit. We had a charcuterie plate along with plenty of lovely glasses of wine recommended by the super-friendly barman. 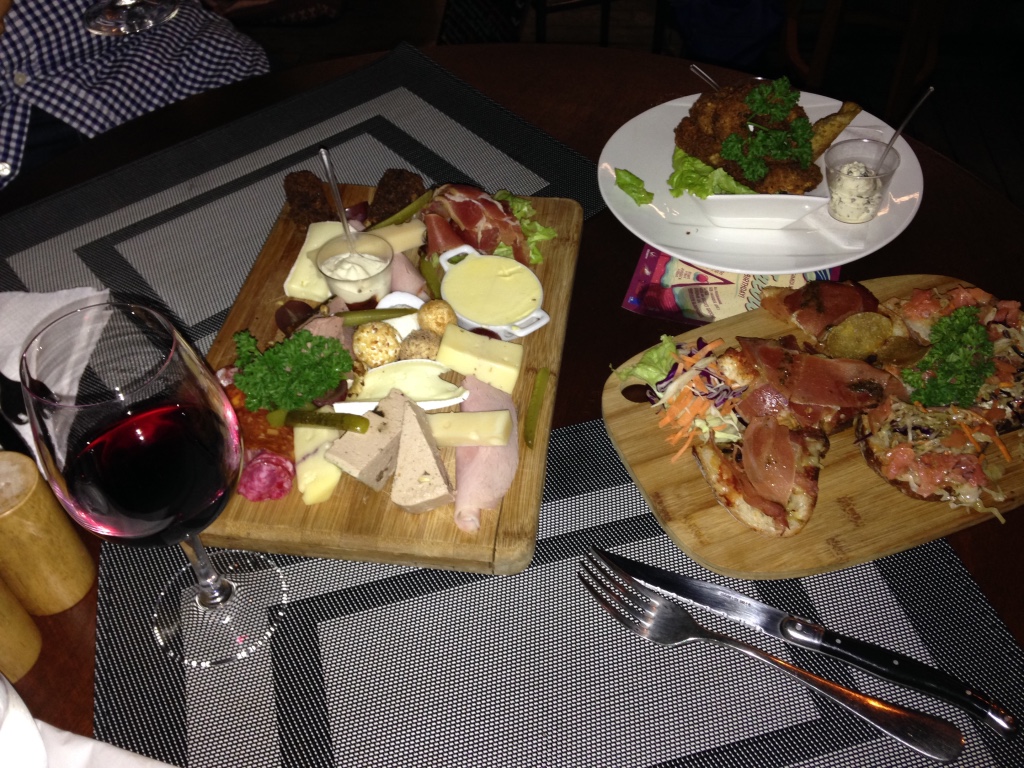 After eating and drinking our way around Noumea we were ready to head to the islands and anchorages to chill out, swim and relax. But the weather had other ideas with continuous wind predicted… forever!

We heard about a weather window back to Oz and decided to jump on it. Yet another place where we felt we’d only scrapped the surface of but sometimes you just need to know when to call it quits. There’s no messing with this weather and who knows when we’d get a good weather window like this.

So we made our preparations, more food shopping, more refuelling and the usual run around the local offices to clear out. Once again this turned out to be like the amazing race. We went to immigration. This office only opened 8 until 11am but when we got there they told us they were closed and to come back at 10.30. We mooched around, listened to other cruisers misinformation and then ended back at the door around 10am when a french sailor was trying to make his entrance. Obviously speaking French is a positive and they let him in and he kindly got us a spot too.

Once in the immigration office we found plenty of other checking out too. It’s always a good sign! Once we were released from immigration we headed to the Port Captain’s office and then to customs. On leaving there it rained again, drenching us to the core and making us more determined to leave and yet even more miserable about leaving. But c’est la vie!