After a few nasty weather days in Suwarrow a smallish / not so bad / should be alright / screw it let’s go for it / window opened up and we decided to press on.

The weather really has been horrible of late. Really bad. We’re all pretty fed up with it and it’s testing everyone as they cross the Pacific. Up until now it’s been the odd day of stormy rubbish surrounded by many days of sunny calm conditions. Since arriving at Bora Bora that pattern has reversed.

The more we read and learn about this area the more we come to realise that’s just how it is most of the time. There are large conversion zones in these parts, where different weather systems smack and crash into each other. The net result is unpredictable weather that can really ruin your day.

As we left Suwarrow we got smacked with one last 30+ knot squall as a farewell gift then quickly got onto our heading over to Samoa. The passage took about four days. 50% was good weather, 50% was ok but not likely to make our top ten passage list. In short we were pleased to head into Apia harbour and anchor as the sun rose.

We’re traveling with a few other boats at the moment. Winterlude (of Tahiti DHL package mix up fame), Imoogi, and Whale and the Bird. It’s good travelling as a pack, the support you feel can’t be measured, plus it’s always good to get a heads up on a new country’s check-in procedures. Two of the boats are faster than us and therefore always arrive a few hours ahead of us.

Talking of check-in’s, Samoa’s was great fun. About eight people visited our boat, all being ferried around by the dingies of the boats trying to clear in. A great time was had by all as huge Samoan customs guys leaped into their transports. One boat that had to move four such guys between a few boats suddenly realised that the weight onboard was actually slowly sinking it!

Once checked in we decided berth at the marina in town. It’s tiny, with only a few spaces, so we were pleased to see a slot free. Upon entering the marina it turns out Four Choices was in the exact same place we had berthed next to them in Tahiti. Was good to catch up with their adventures.

Apia is the main town in Samoa. It’s a strange mix of clashing building styles, spread out around the long harbour. It’s one of those nothing quite works but I like it anyway types of places. The recent history of the place explains a lot as a huge tsunami hit the area a few years back. They are still working to rebuild but some of the old buildings remain which are amazing. 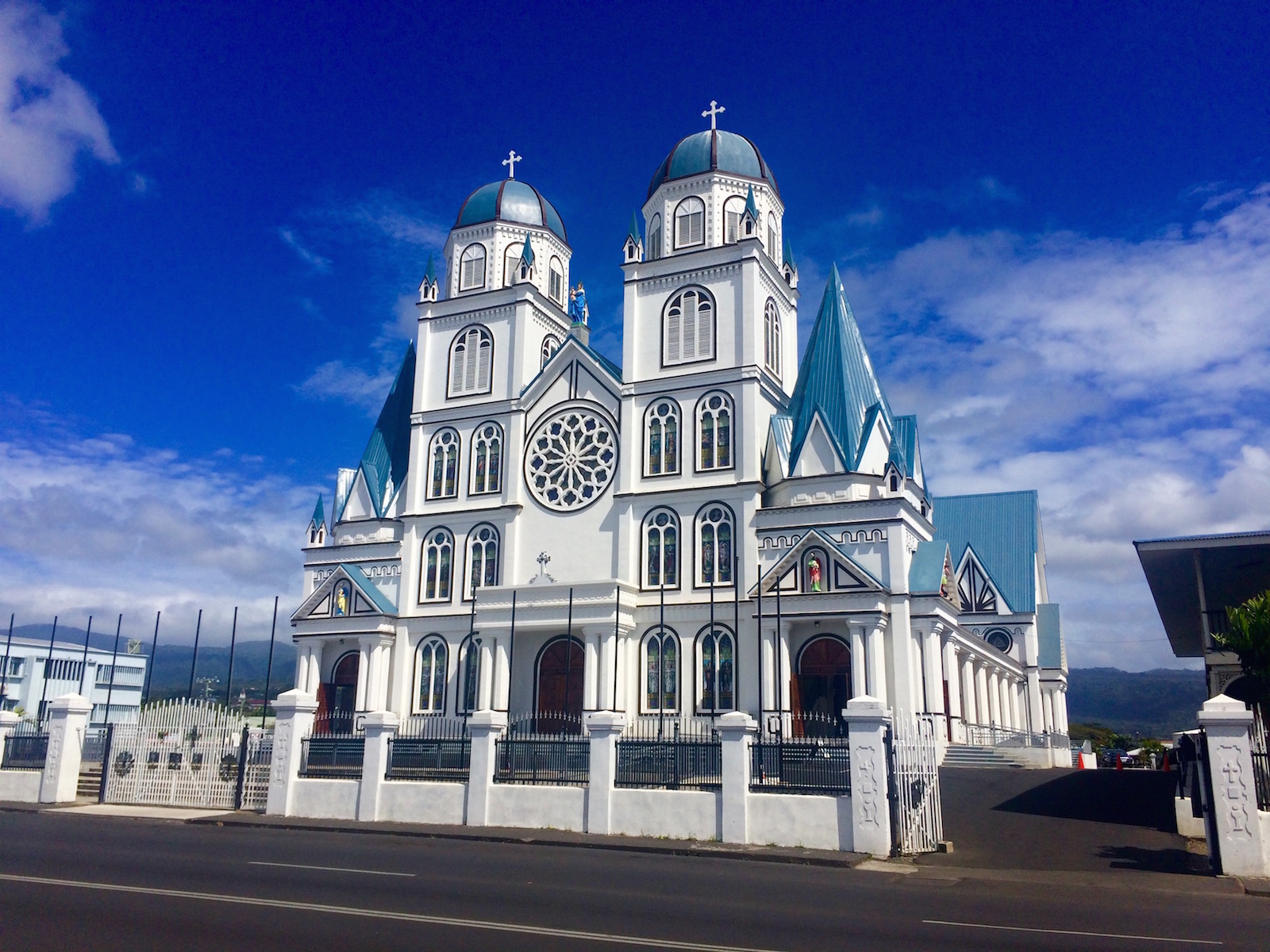 As we wandered about one thing instantly struck us. It’s easily the friendliest place we’ve visited so far. A lot of places claim this, but honestly we’ve never felt more welcomed. Five mins after stepping off the boat, we were looking for an ATM to get some local currency. A guy and his wife pulled over in their beat-up car to ask what was wrong as we ‘looked confused’. Instead of giving directions they drove us across town to the bank with the lowest fees explaining the history of the island to us as they went.

The main town is an odd place. It primarily sells cheap Chinese plastic crap, with a few places offering amazing locally crafted carvings, and nothing in between. If you want some mis-shapen rip-off plastic superheroes with the paint rubbing off… this is your place.

What the town does have is some amazing places to eat. We went out for a few meals with the little group we’re travelling with and enjoyed some amazing dishes. It also has a McDonalds.

The locals all told us that Apia isn’t the real Samoa so we got together and hired one of the local taxi guys (more on them later) to take us on a tour of the island. It’s a truly stunning place. Lush and green with crystal clear waters. We swam in waterfalls, visited great beaches, climbed down ladders to hidden caves, and, erm, drank a lot of beer! 🙂 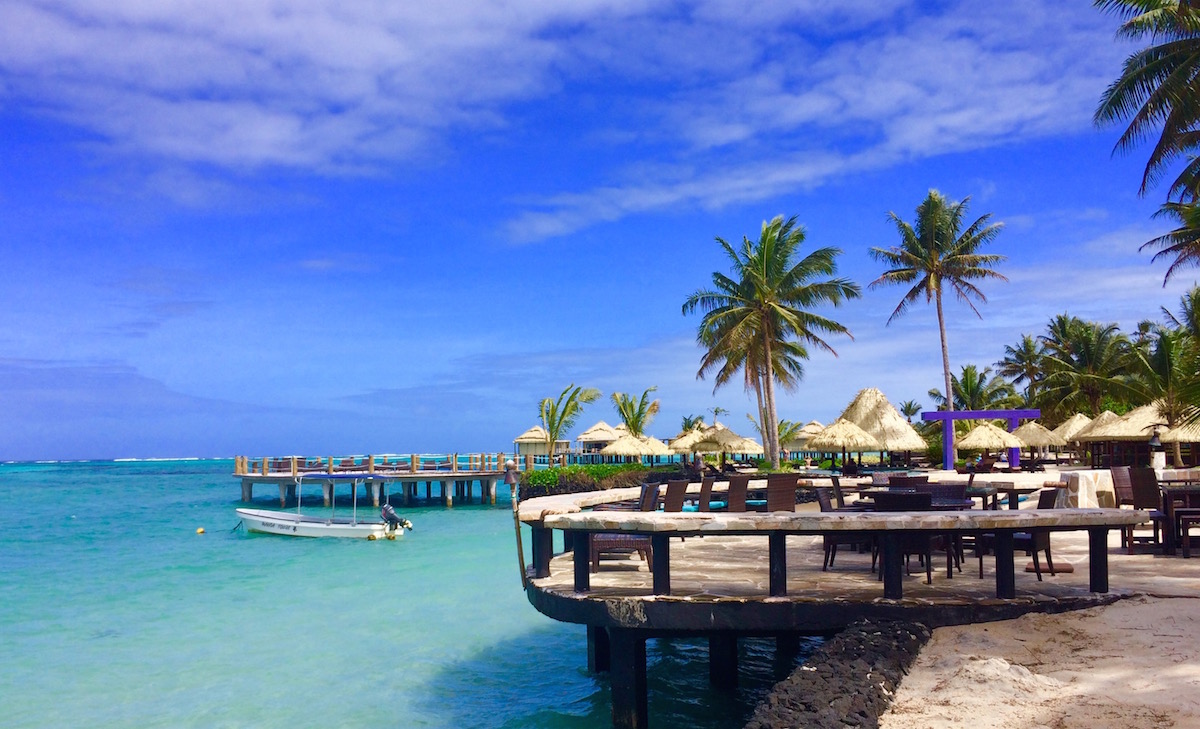 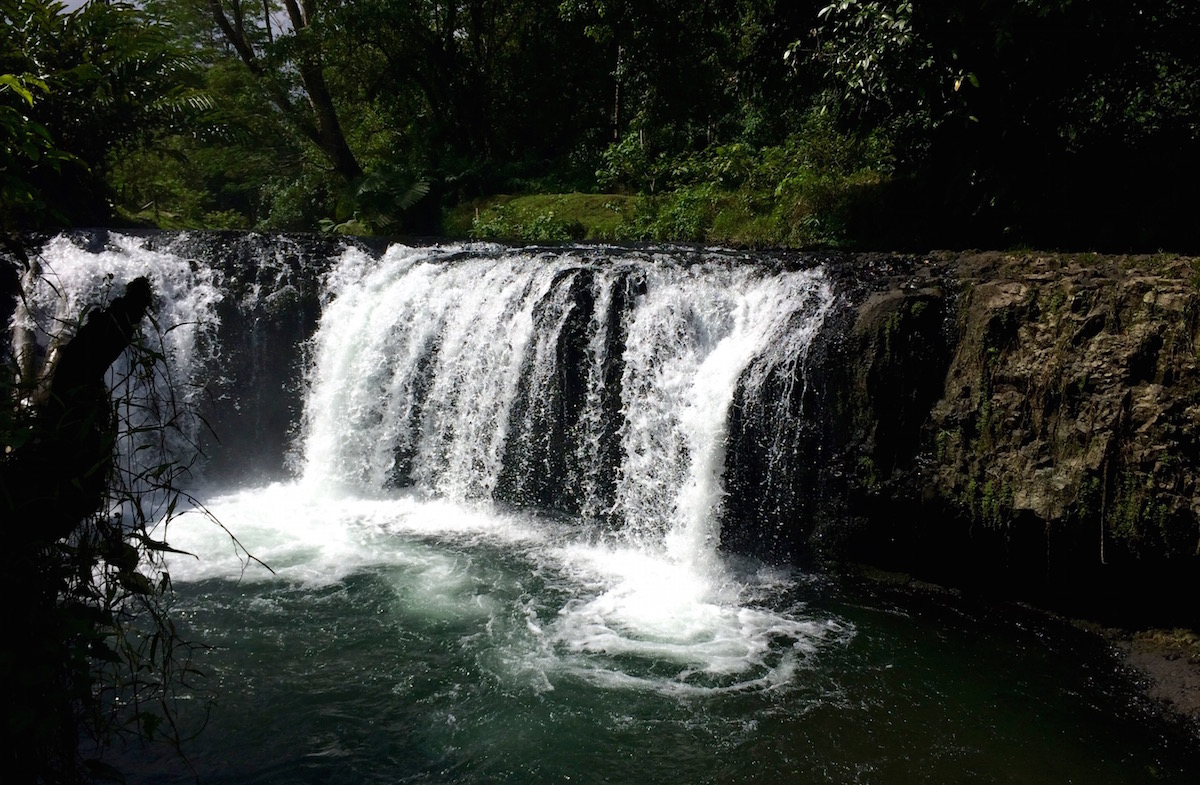 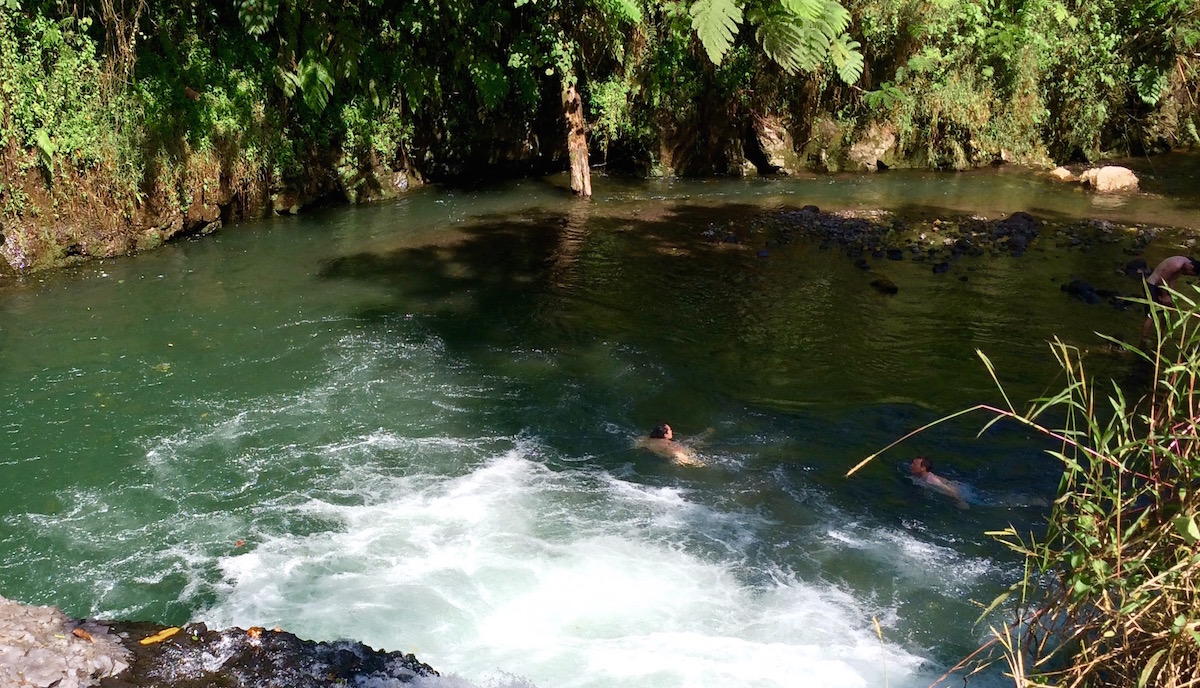 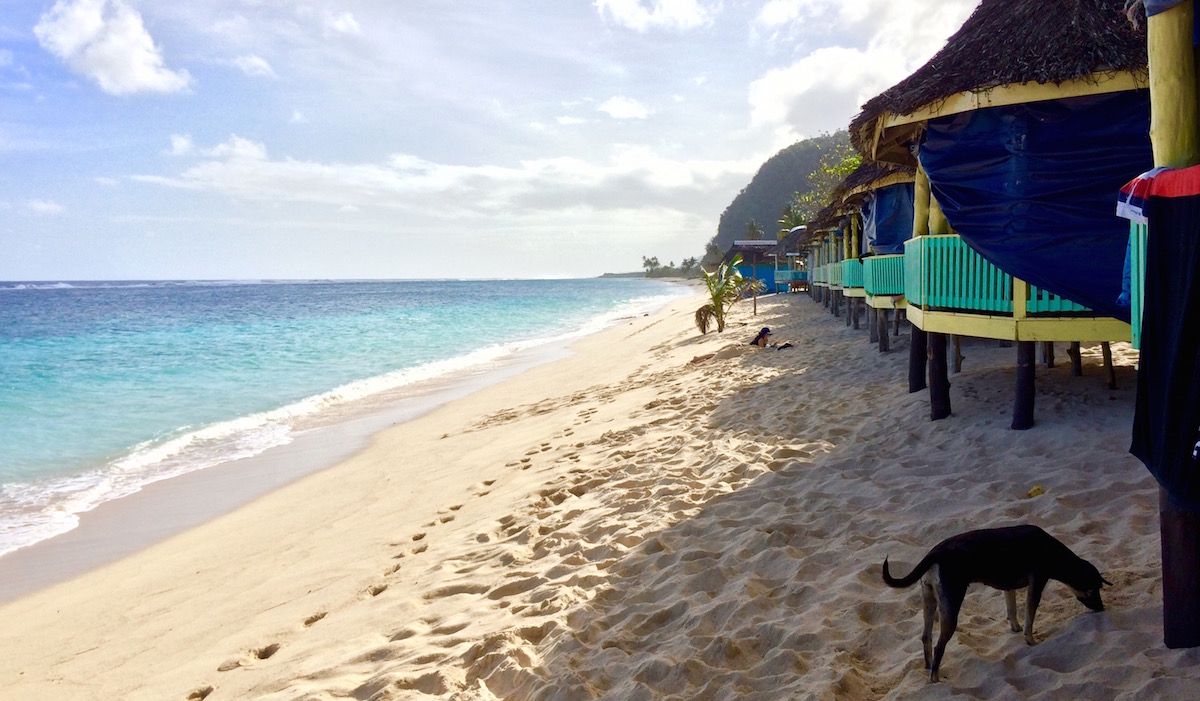 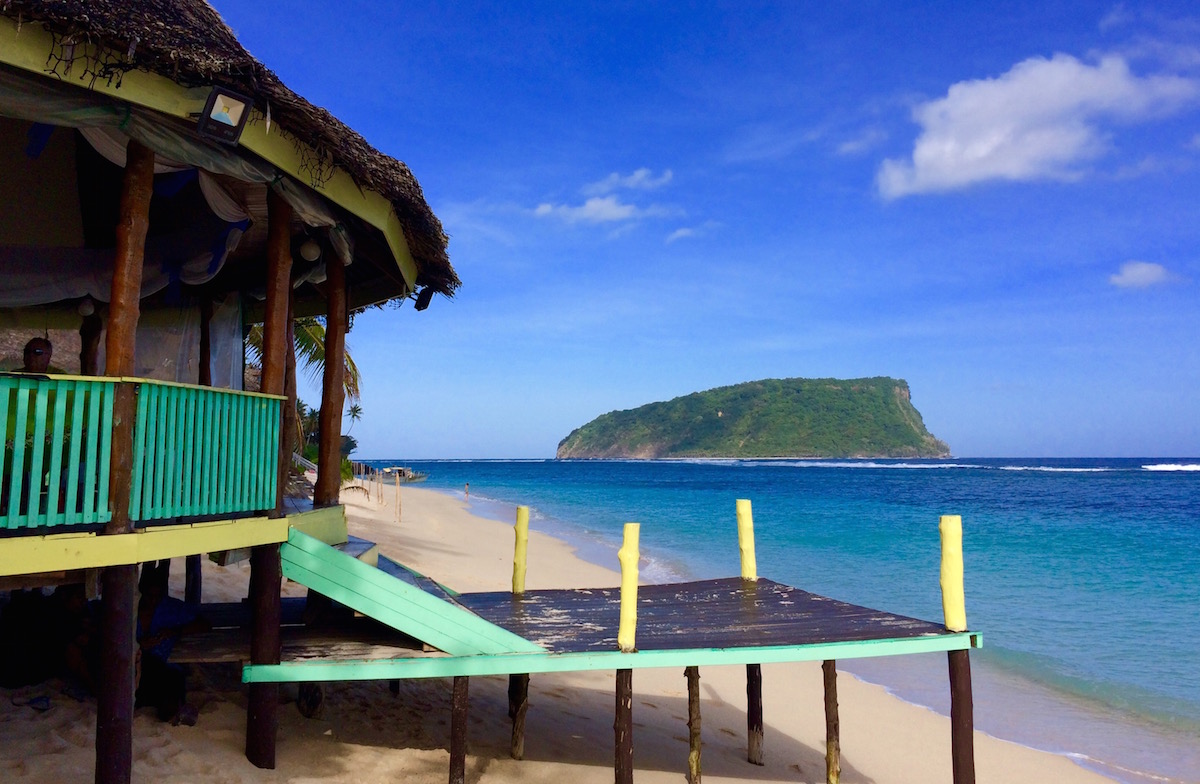 Between all the beer drinking the road trip took us to the house where Robert Louis Stevenson lived, he of Treasure Island ilk. The place was amazing and perfectly preserved. Turns out the poor guy was a very sickly person and after traveling the world made Samoa his home as he found the climate more agreeable with his constitution (whatever that means). The tour guide said the Samoan people loved him as he was very fair to them, although from what I could see that meant him living in a huge house while they worked and served for him. Oh well, was interesting all the same and a lot of info on old sickly Stevenson was absorbed. 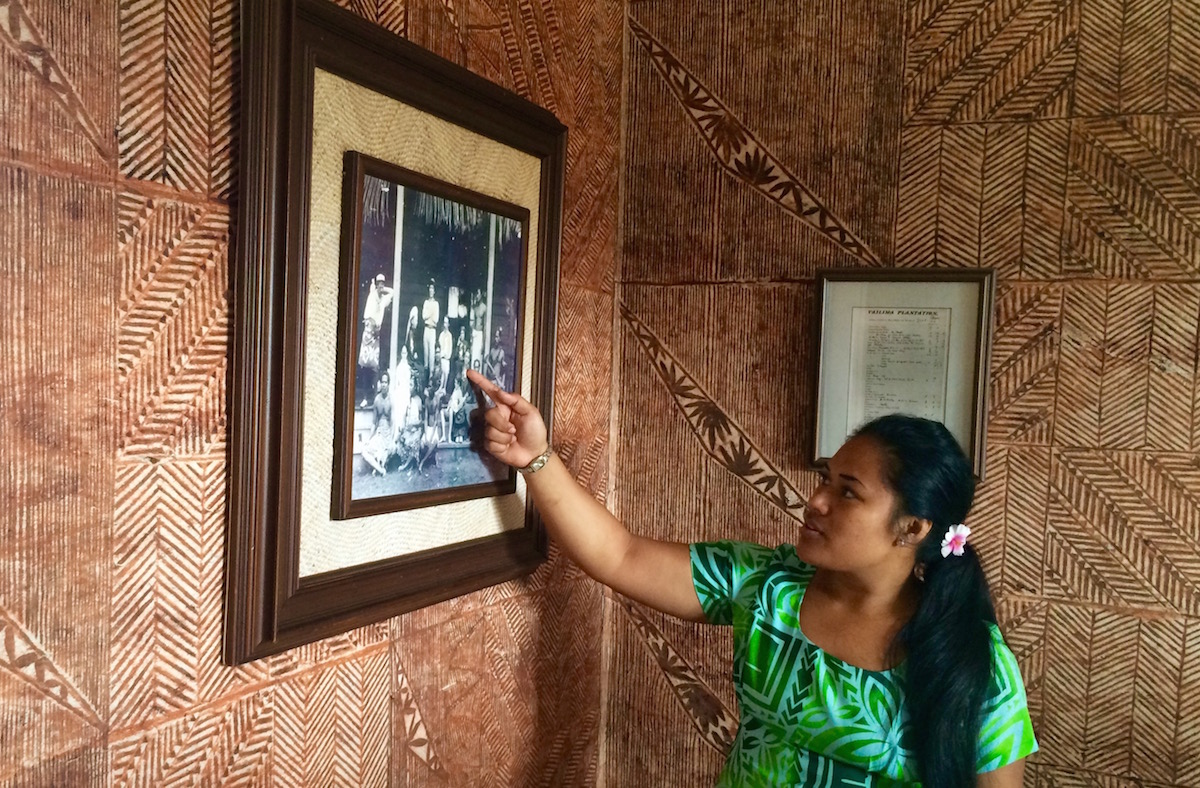 Next day we visited the Samoan cultural centre. We were worried this would be a bit cheesy and touristy but it was actually really interesting. Samoan people take great pride in trying to preserving their way of life (cheap Chinese plastic crap not withstanding). A lot of their arts and crafts are created at the centre which was built to help keep the old skills alive. The wood carvers were amazing to watch, turning solid cubes of teak into beautiful dishes and bowls. 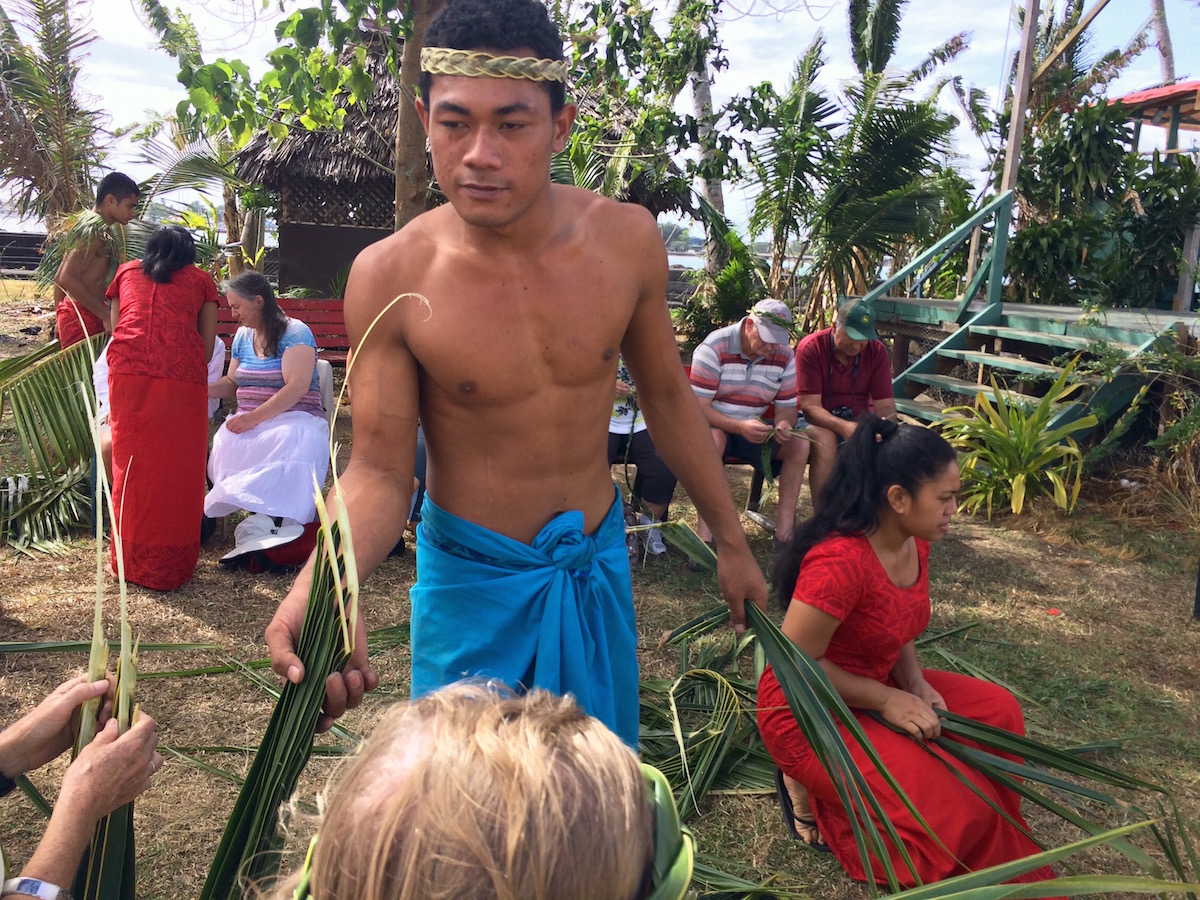 We also were allowed to watch one of the local guys getting his ink on. Once the family thinks a guy is ready for this procedure (he’d bring much shame on the family if part way through he stopped) he can get a huge tattoo that runs from his middle right down to his knees. It’s pretty much solid ink but with very delicate work running throughout and it’s done traditionally. No electric needle and numbing cream here. We watched the poor fellow as the village inker used basically a small nail dipped in ink and then hammered it over his skin. Ouchy! The guy was clearly in a lot of pain but his family members and local tribesmen all watch over him and try to offer comfort. He was on his 3rd 4 hour session out of 15. Pretty impressive.

After we’d finished looking over all the different skills on display Helen and I returned to the wood carvers who we were really impressed with. Helen had spotted a design she liked so asked if he could create a piece for us. The guy agreed and we were told to return in two days.

For a small place Apia has a LOT of cool bars. We checked a few out during our stay but the most memorable was stopping by Ace bar one Friday with some of the yachties. It’s a busy bar with pool tables out the back and I loves me a game of pool. The locals were again really friendly and we were soon playing doubles against a local pair. I teamed up with Bob off Four-Choices and we won our first three games. Dean off Imoogi was looking for a partner to play with and asked the ref (a guy who sets up all the tables and resolves any issues) if he could find someone. Next moment this HUGE local guy walks over to our table towers over Dean and says ‘I’m playing with you, we’re up next.’.

Turns out he was captain of the Samoan rugby team! The rest of the team followed behind him and hung out by the bar. Fiji had just beaten Samoa in a very close final of the Pacific cup over in Vancouver and the team had just arrived back in Samoa. They clearly wanted to let off a bit of steam and we ended up playing about ten games with them.

The rules were a little all over the place and very fluid, for some reason they changed to make sure  the Captain would win. At one point I’d snookered him and he called a ‘challenge’ which seemed to suddenly mean I had to to hit his ball to win or lose if I missed. It was an easy snooker to get out as the ball was just off the top cushion but when I lined the shot up he then changed the rules so I couldn’t hit off that. I had to go off a side cushion making the shot harder. None of us could work out what was going on and with the whole rugby team watching I wasn’t going to argue. I took the shot and missed. Somehow I’d gone from a commanding position to losing the game in an instant. Still, when the smallest guy at the bar was about 7 feet tall and not much less wide I was happy to get out with my legs still attached!

The drinks flowed and we had a great time with them. They started getting a bit ‘slappy’ with each other by the end of the night so we ducked out before an accidental slap knocked one of our heads clean off.

Once again the weather was proving to be all over the place and we ended up trapped as conditions were too rough to venture out. We did a tour over the other island nearby, Savai’i, which was nice but not as much fun as the mainland actually. Was good to see the differences between the islands and of course the locals of each think their’s is the best. The ferry over was fun as well. I think it was an ex Manly Ferry from Sydney circa 1835. There wasn’t anywhere to sit so we were in the crew quarters from what we could tell. The guy who kept heading into the engine room with a huge spanner really reassured us as well.

On the other island we did stop at this amazing lava flow area where it ran straight through a church. Not sure what the big guy upstairs had in mind that day but it made for a cool area to explore. 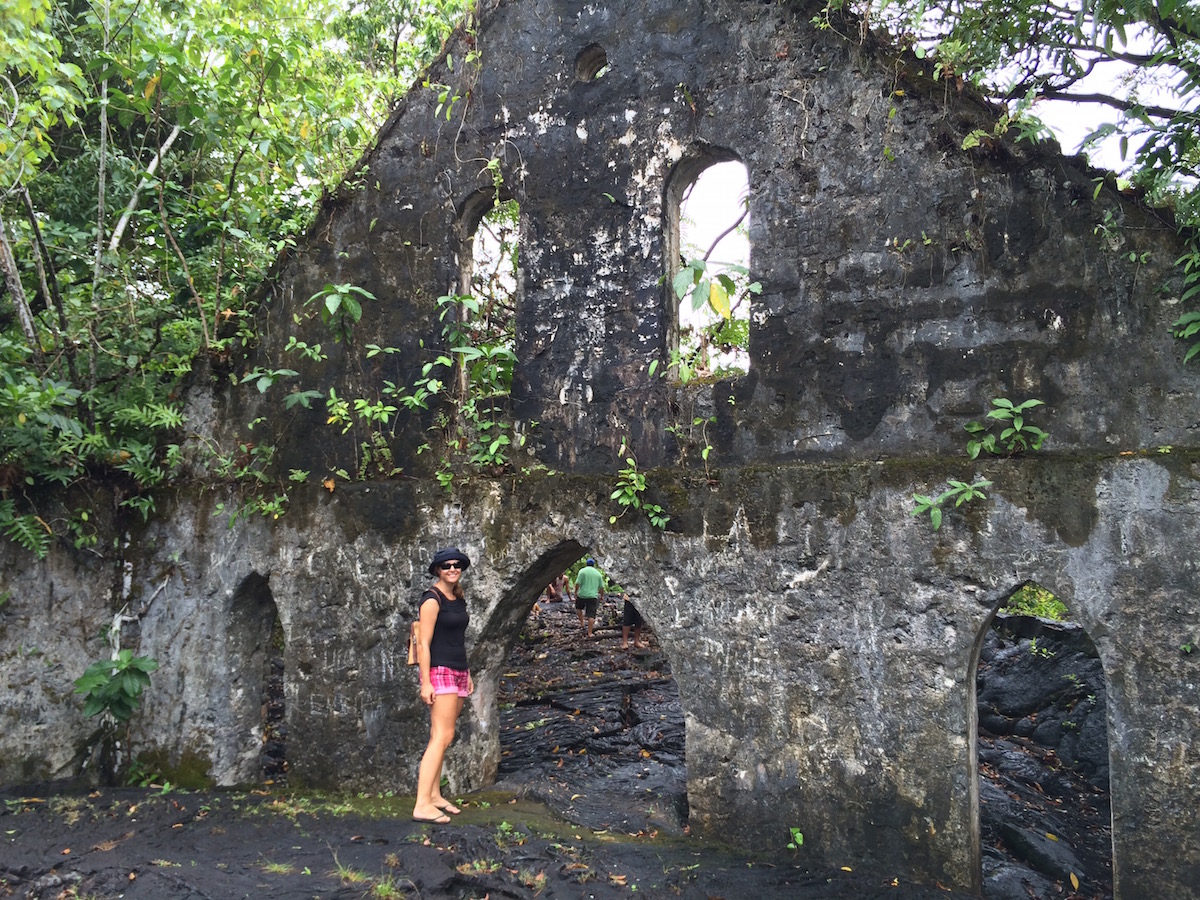 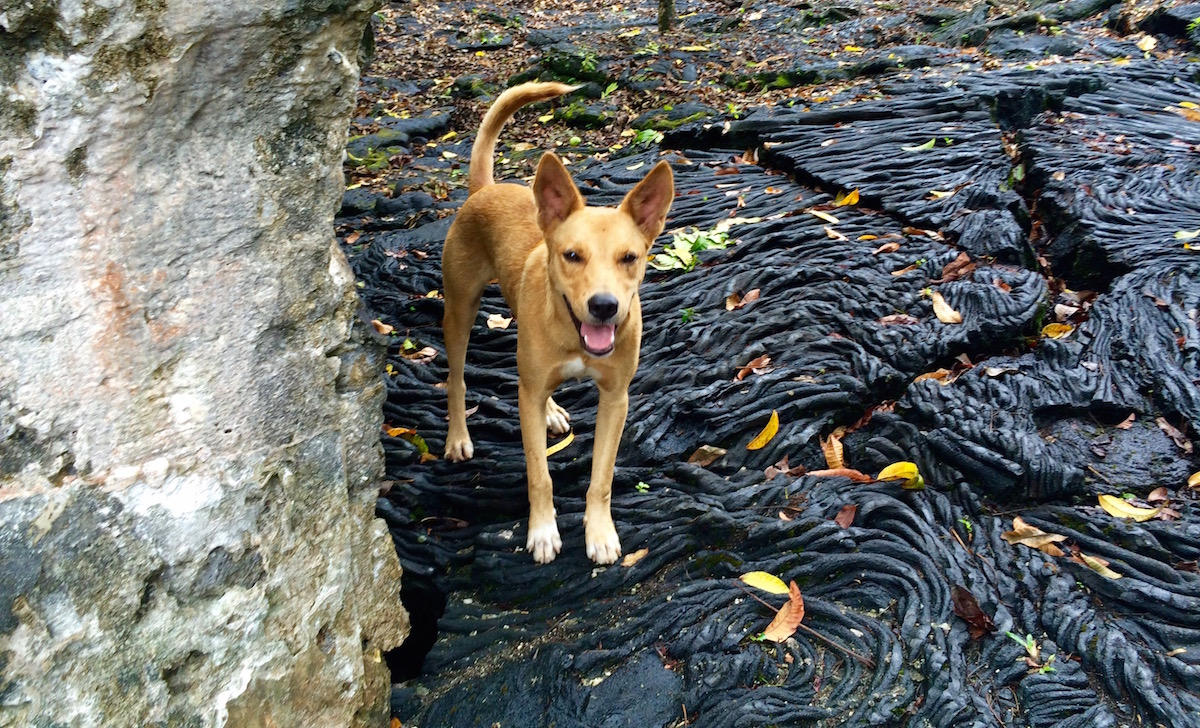 We also visited an area where Turtles hung out. They were quite tame and loved eating fruit which Helen shared with them, all say Arhhhhhrrr. 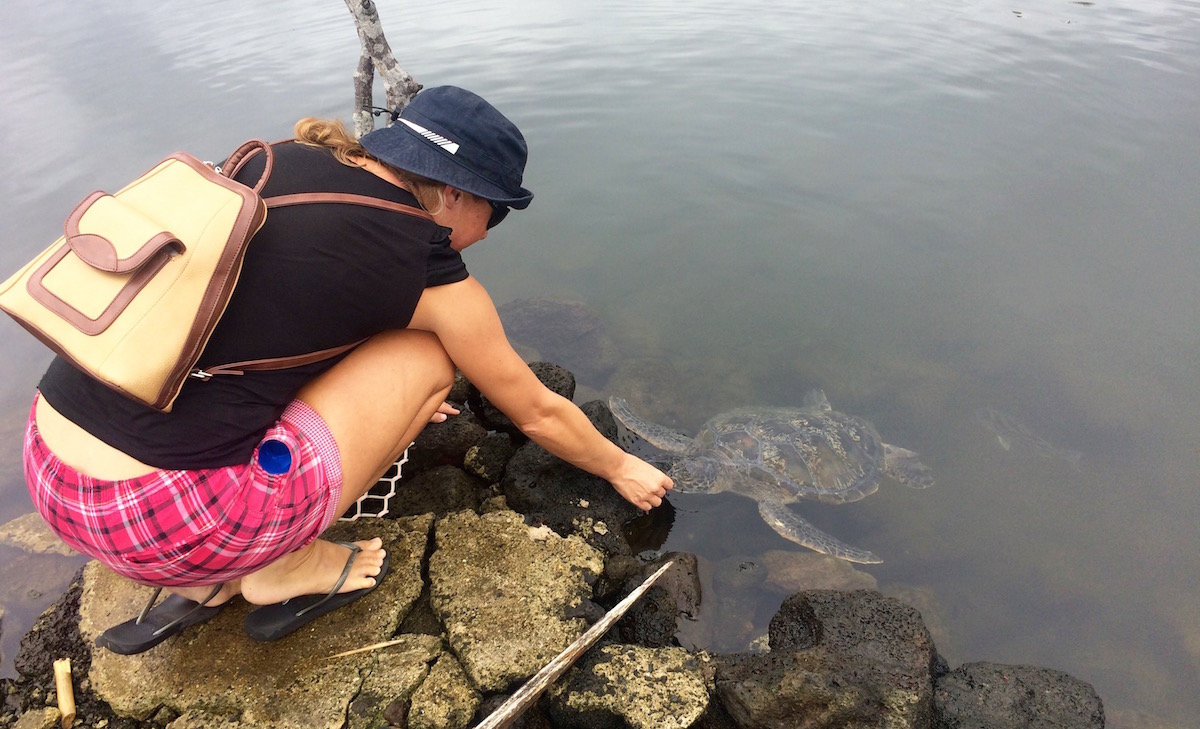 The taxi guy also found us a pretty nice spot for lunch. After the boozey road trip a few days before we were actually quite well behaved (maybe the thought of being half cut on that ferry heading back had something to do with it). 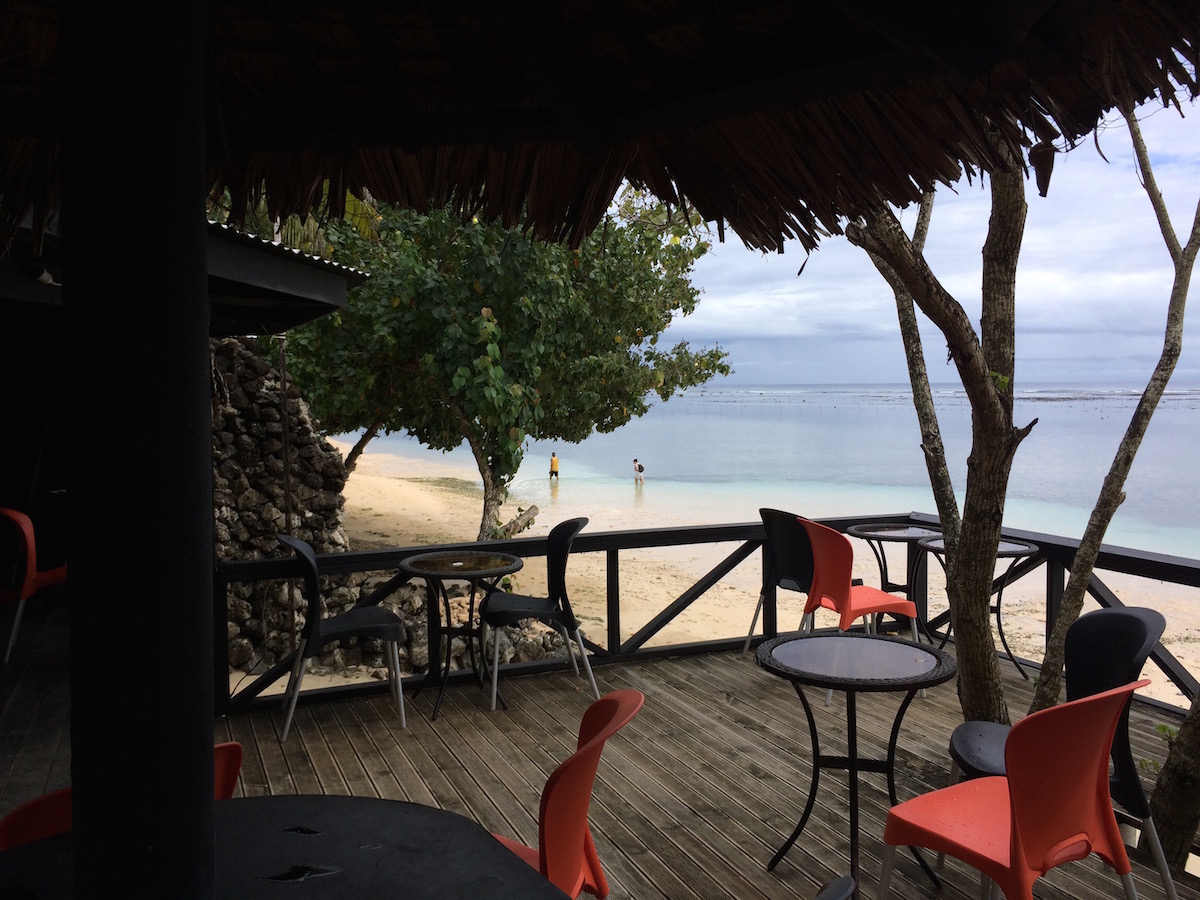 Apia is known for being hot and towards the end of our stay it got crazy. Luckily an amazing snorkelling beach is just behind the marina where we went to cool off a few times. As with most places the coral is just starting to come back after getting smacked with the tsunami that hit a few years earlier. Still lots of fish around though and chilling in the waters was more like survival then anything.

The bar near the marina also offered some nice shade in the afternoons. 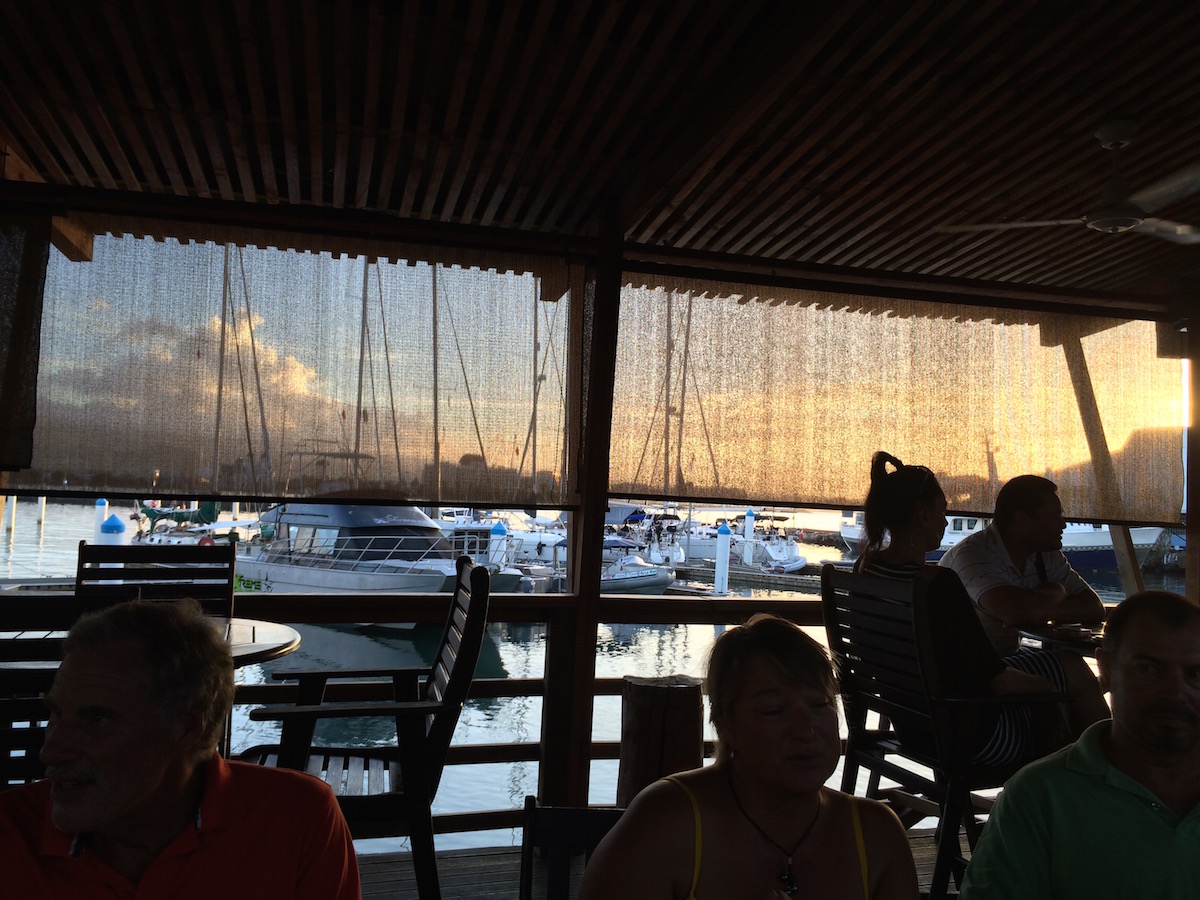 Before we left we returned to the cultural village to pick up our wood carving. Very impressed. Good work Mr. Carver! 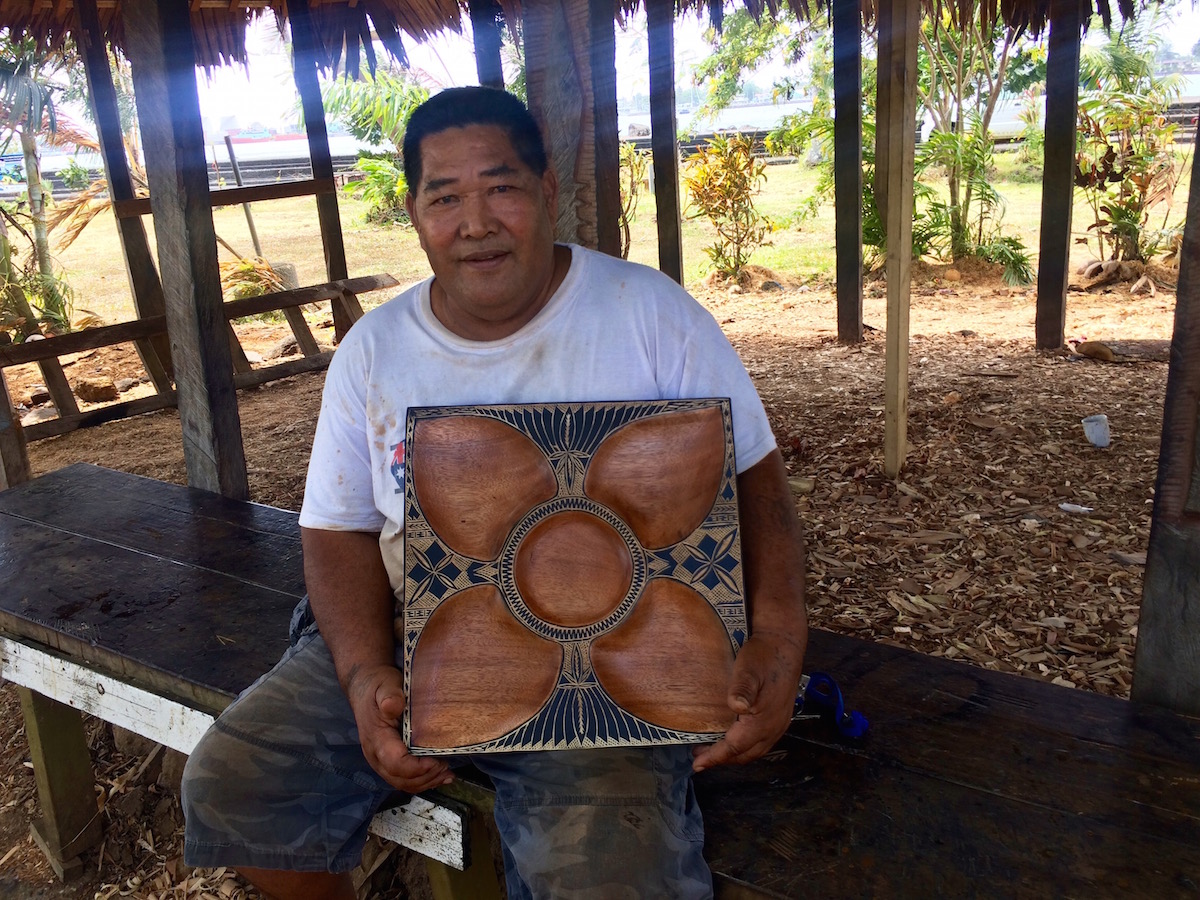 After nine or so days in Samoa we finally got a window to head South to Tonga so took it. Looks like being a mix of sailing and motoring but as this passage is well known as being a tricky one with the trade winds hitting almost on the nose we’re going to get out while we can, even if that means burning some fuel.

One thought on “Samoa”