After a fun time was had by all in Lisbon it was time to move on and make some more headway. The Med doesn’t seem to be getting much closer. We decided on another three-leg journey via Sesimbra, Sines and Baleeira that would not only break up the trip but with the added bonus that we would hopefully be able to anchor and save some mullah!

We were going to anchor outside Cascais the night before but it turned out that we’d already missed the cut-off time – 2pm for checkout!! So that was a little frustrating, especially as this is one of the most expensive marinas we’ve stayed in but it did mean that we could chill out in the marina a little longer.

The good thing about smaller sailing distances is that you don’t have to get up before dark – which we both hate – and I was trying to avoid that dreaded alarm clock since leaving work. So we left at a leisurely hour, moseyed on down to the fuel dock and then off to sea again.

The first stop this time was to be Sesimbra, a little anchorage that Simon had found on our new favourite website, Manor Houses of Portugal.

This anchorage was so small it hadn’t even been included in the almanac but lay just East of Setubal. We mentioned it to our neighbour as we were heading out and he seemed to know of it so we thought we’d give it a go.

We had some good sailing downwind and so got there at a reasonable hour. The website said there was a harbour wall that you could tie up alongside, but we couldn’t work out which harbour wall it was and saw that there were a few yachts on mooring bouys. That seemed like a good idea so we got out the boat hook and picked one up. 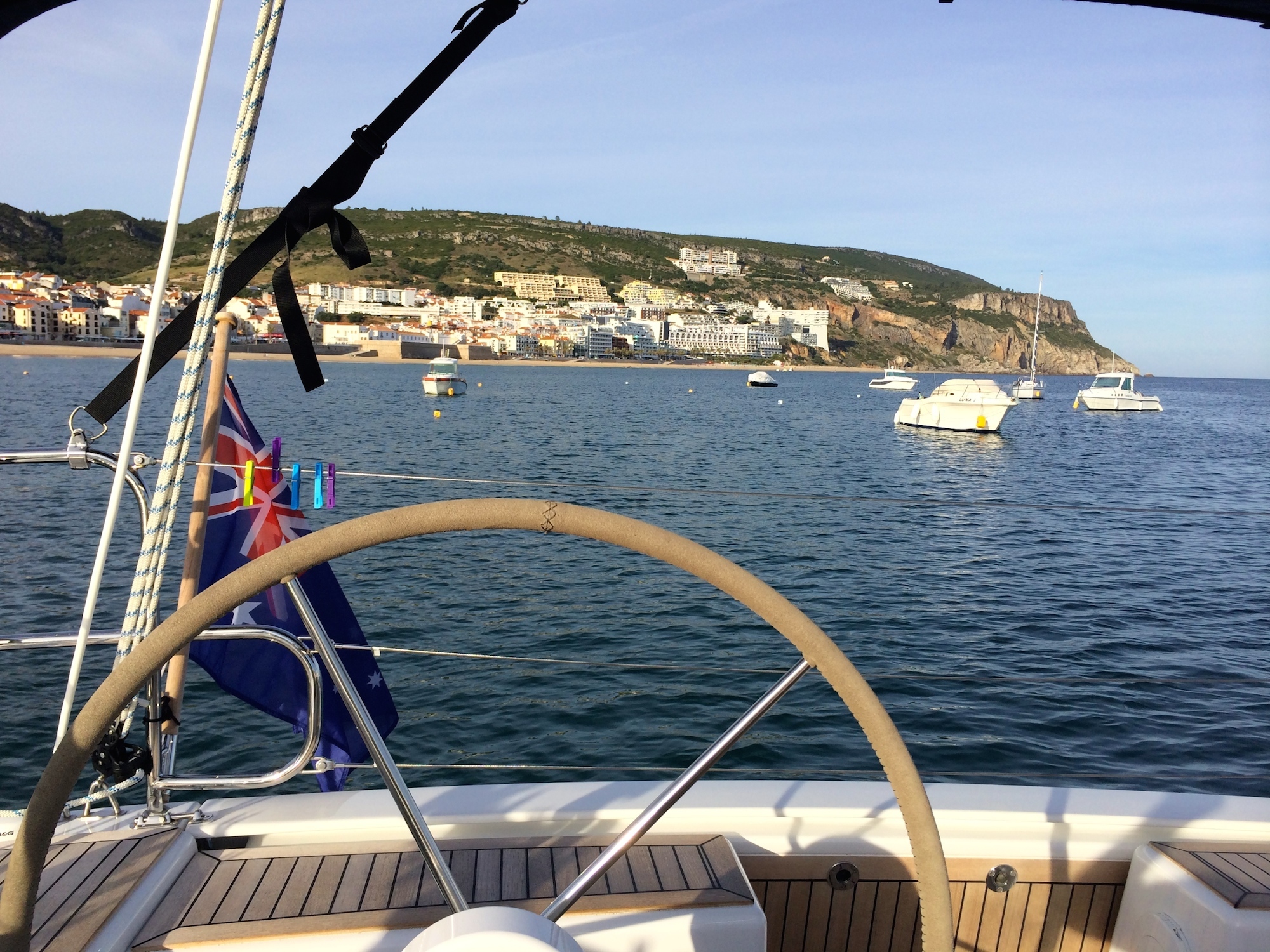 About an hour later a dinghy started making the rounds to each of the yachts and when it was our turn he informed us that the moorings were not strong enough so that we would have to go into the marina. Everyone did, except that is for us, we chose to anchor instead just out from the beach. We were the only boat on anchor which was a bit disturbing but it’s good not to follow the herd all the time.

It was a pretty town. The beach was full of families making the most of the sun and even some brave enough to swim. We contemplated getting the dinghy out but decided against it. To be honest we’ve both had a cold and we just weren’t feeling up to it. So we ate dinner and then headed to bed. 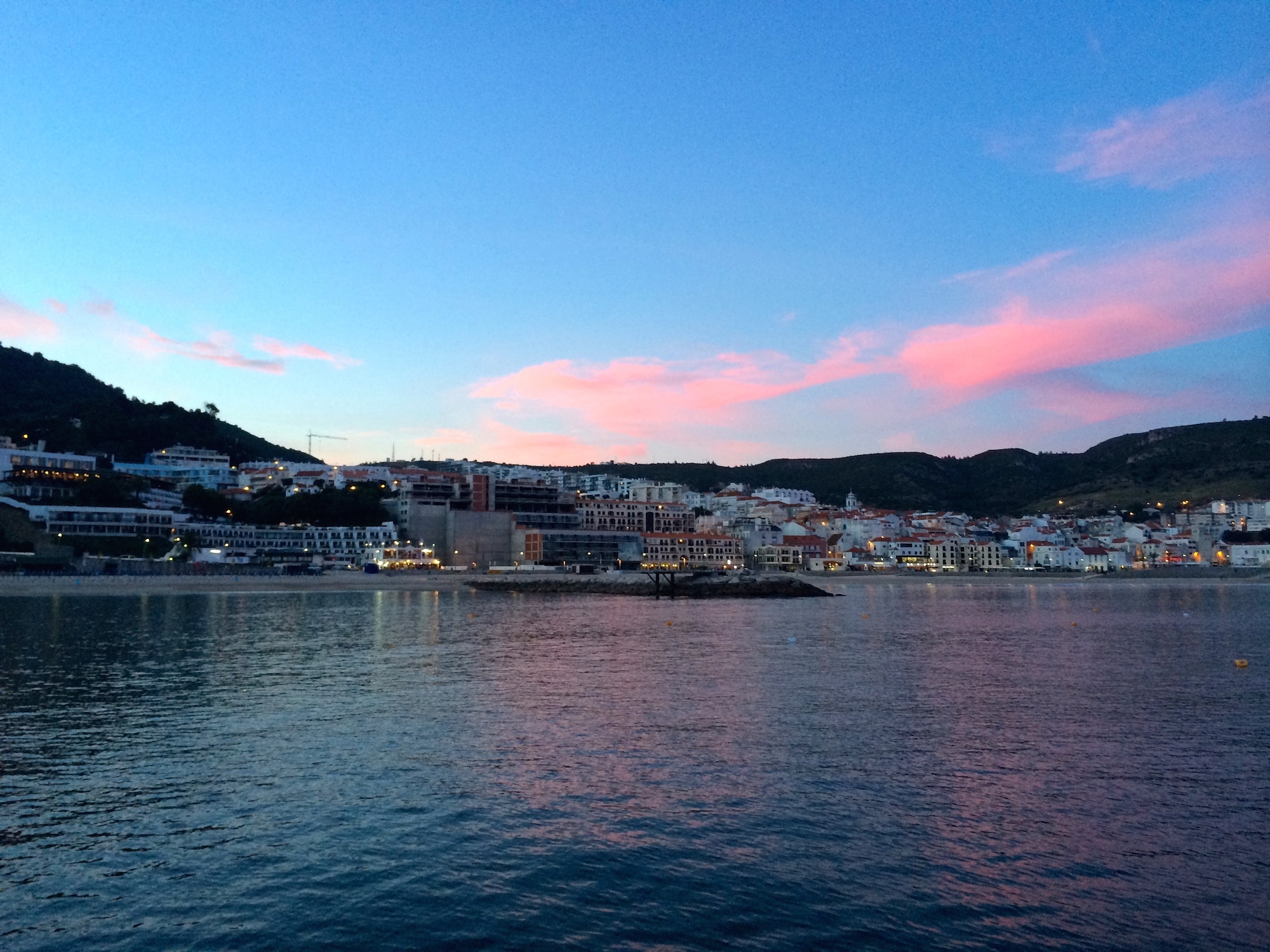 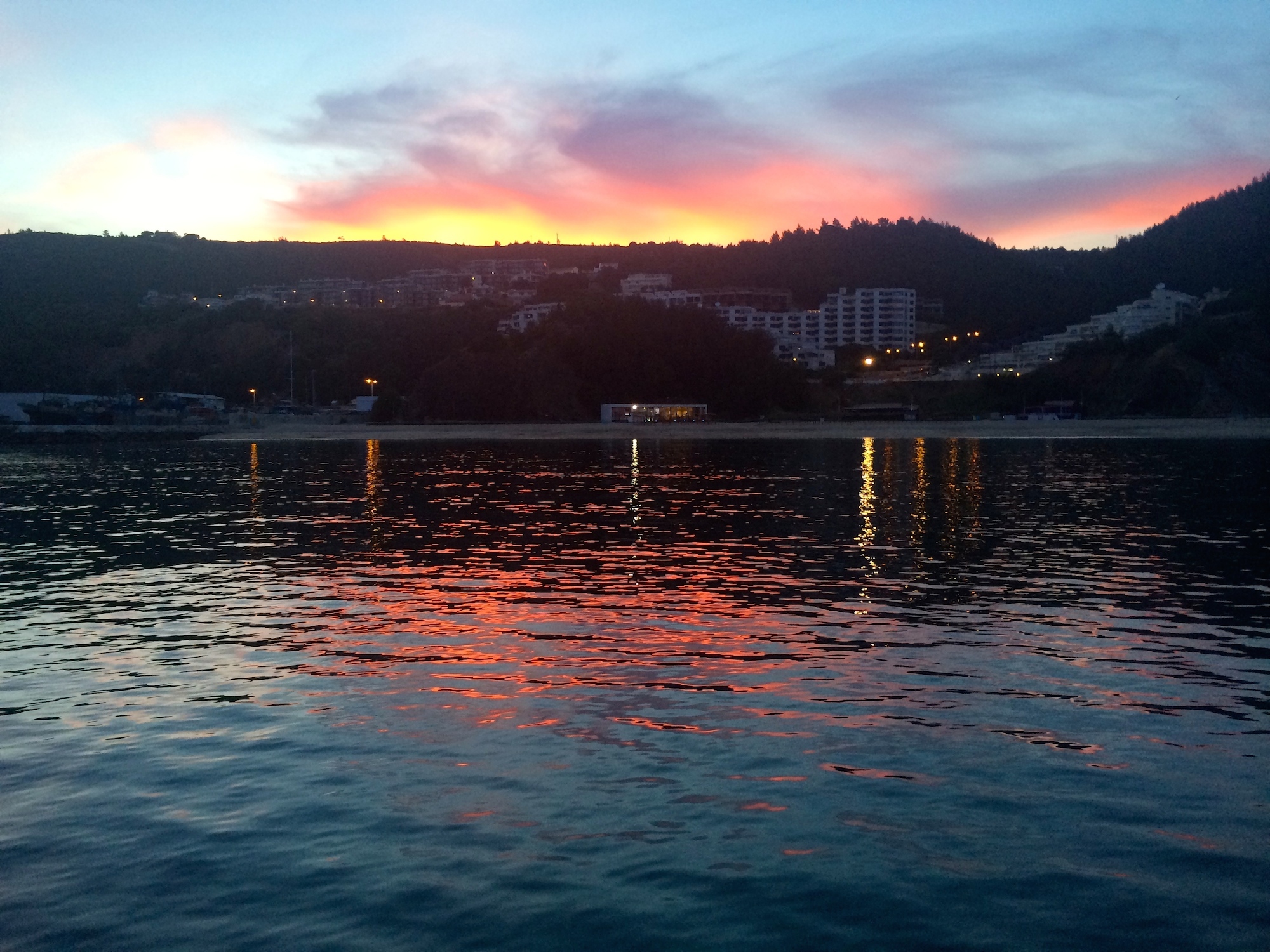 It was a bit of a sleepless night as the anchor chain kept banging on the bow roller and there’s always that worry of ‘Are we dragging?’ so there was lots of times when we got up to stick our noses against the window to check our transit lines. It was all good though and I don’t think we moved all night.

The next day we were destined for Sines. One of the things that we love about anchoring is that when you’re ready to make way it takes just minutes to leave. When we’re in a marina there always seems to be lots of time spent with lines, sail bags, fuel docks, returning the cards etc. We were also a bit more prepared with the uploading of our route to the chart plotter. The previous day there was a bit of a malfunction with that so now we’re determined that this is another thing that we will do the day before. It makes sense but it’s just all too easy to put it off.

Anyway we were up and away and heading for Sines. Once again the wind was from behind and the gribs predicted 10 to 15 knots. There was a bit more cloud cover than expected making it a bit on the chilly side but we were cruising on down and making some half-decent speeds.

In the end we managed to wind in the main sheet, releasing the preventor as we went, dropped down the main a little and put in our first reef. By that time the cold front had passed and it was time to shake the reef out again. Anyway were still not 100% certain about the process of reducing your sail while sailing downwind with a preventor on, it still seems a little clumsy, so if you have any ideas please post a comment.

After that bit of excitement it was just plain sailing over to Sines. Once again we headed into the harbour and dropped our anchor close to the beach. 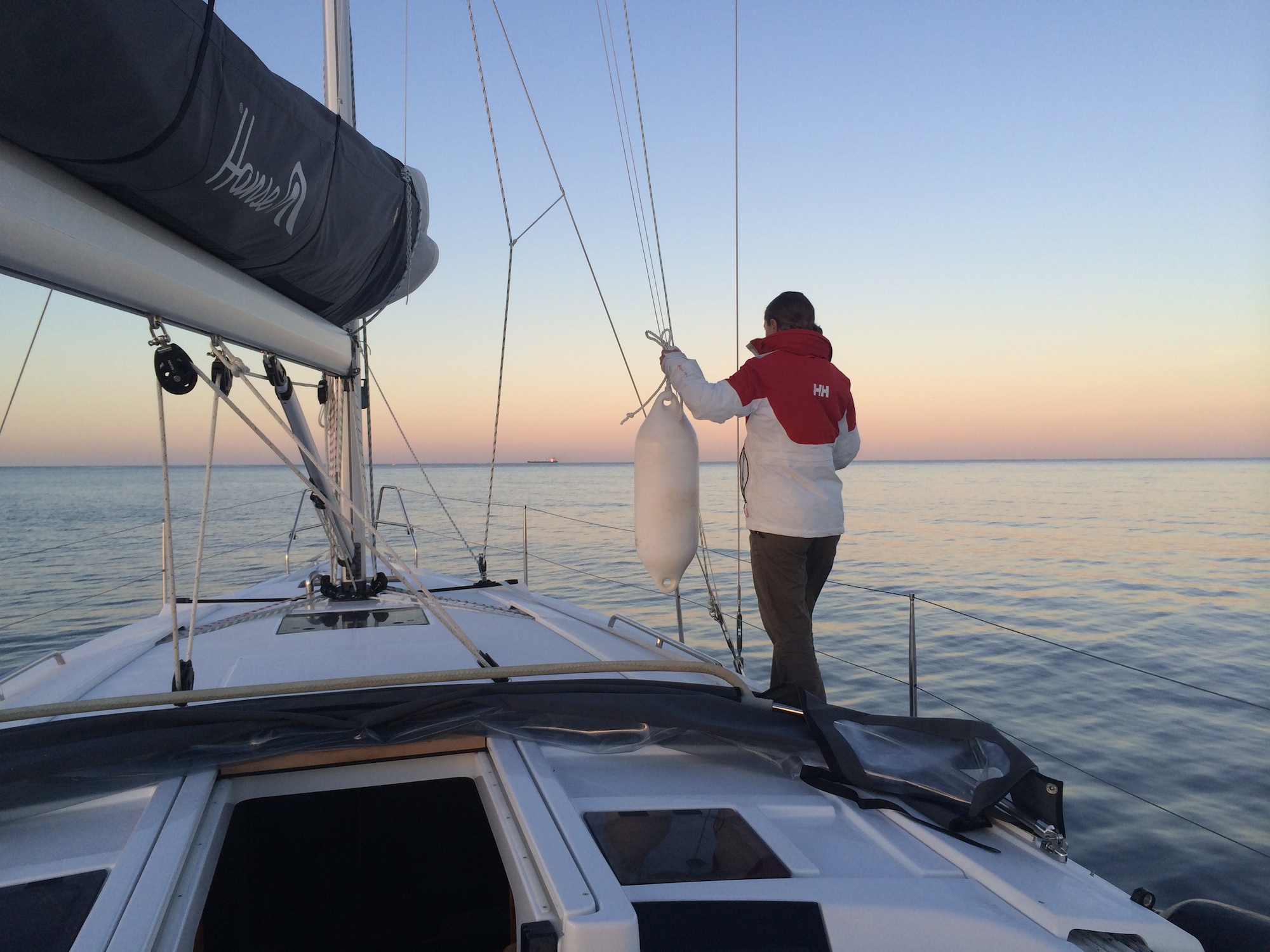 We were alone again, so were only too pleased when our Swedish friends that we’ve bumped into a few times now, turned up and dropped anchor just behind us. Gave us a bit of added confidence. 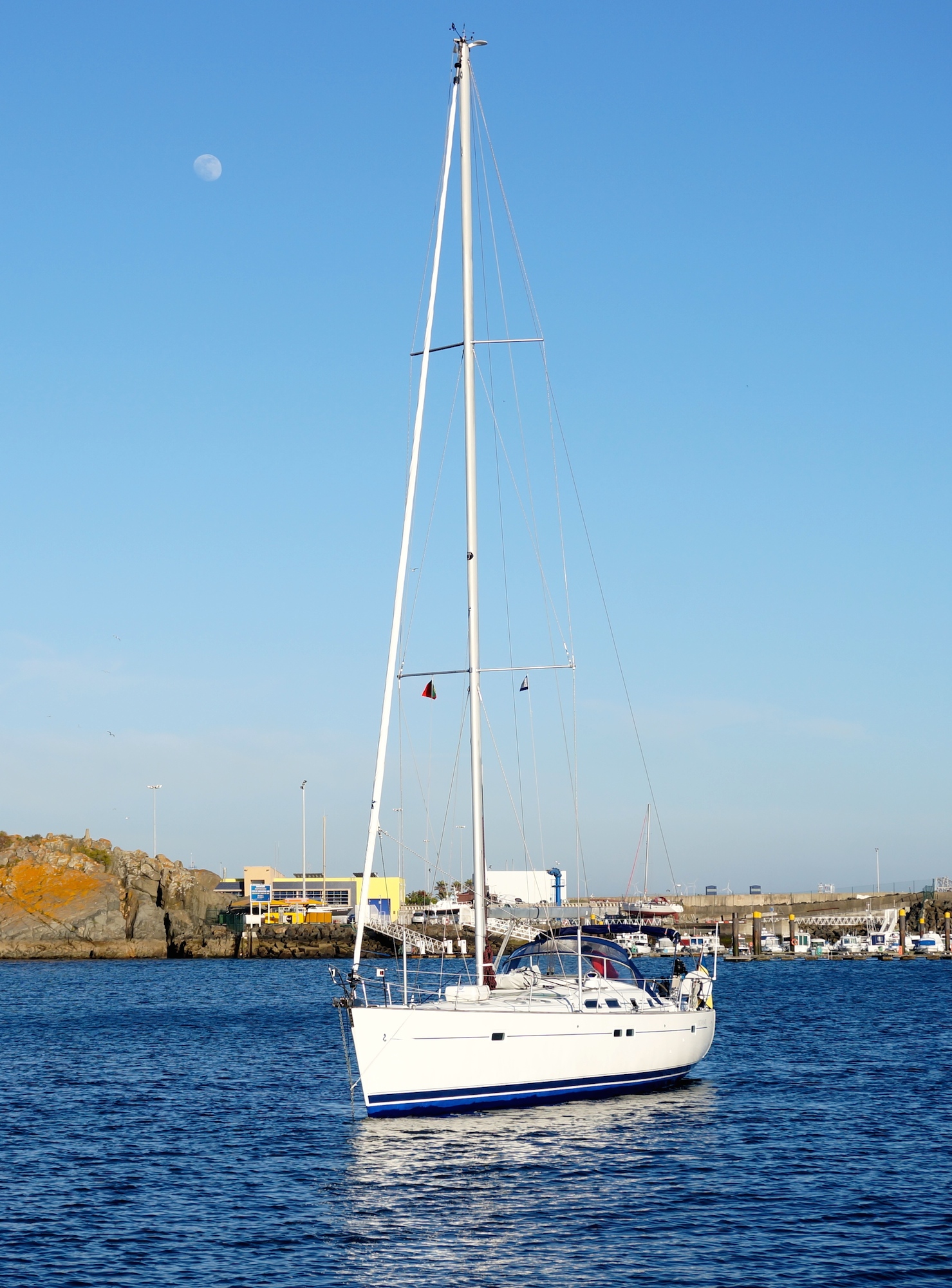 Also we’ve been talking for ages about tying off the anchor – a tip that Jamie gave us to protect your bow roller and windlass. Anyway we noticed that this is what our Swedish companions had done so we thought we’d give it a go. We only had some thin string but it worked a treat and we slept much better with less banging and crashing 🙂

Sorry, we can’t tell you much about Sines either, except that it looked lovely from our boat. We’re still suffering the flu and didn’t get the dingy out – I know it’s a crying shame! 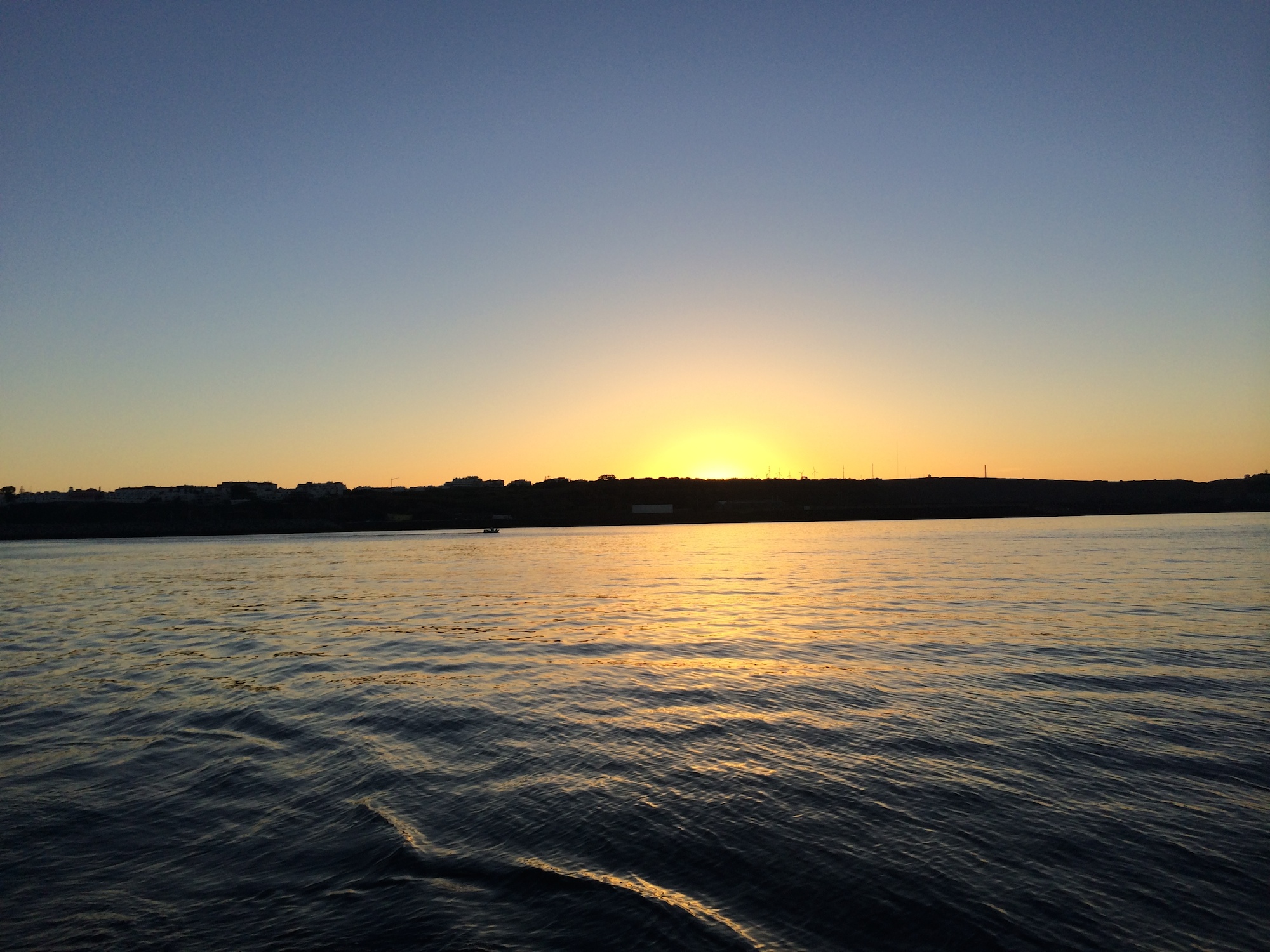 Our next stop was Beleeira. We headed out into some calm weather and were motoring along nicely, hoping for some stronger winds later in the day so we could get the sails out. It was Simon’s watch and I just sat down with a nice cold drink ready for some R&R when I heard him holler “We’ve snagged some pots!” and cut the engine.

I later asked him how he knew we were snagged and he said “The speed fell and the pots were skidding along the surface of the water like a scene out of Jaws.” 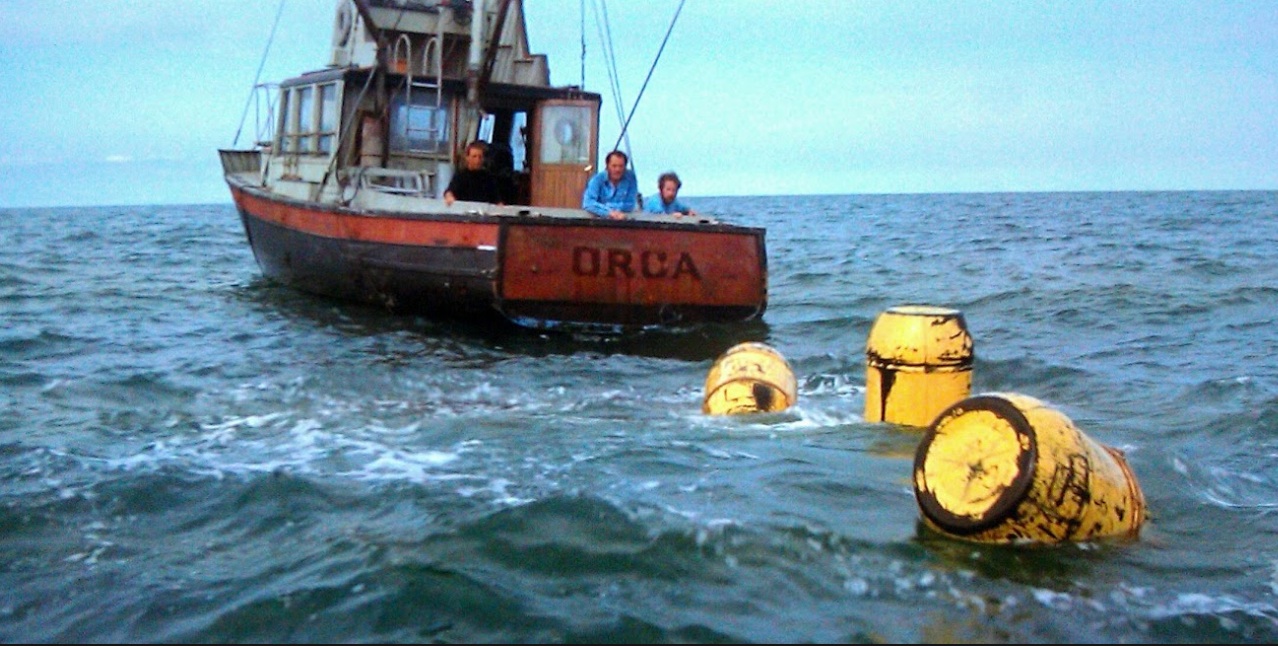 The water was really clear and you could see that the rope was going from one buoy down and under the boat then back and across to the other buoy. We could only hope that it was snagged on the keel and not the prop. Simon swung around and I managed to grab both ends of the rope with the boat hook but it was still snagged below the boat. The keel is two meters and the boat hook is probably the same, so add on the depth of the hull and we were never going to be able to simply unhook it without one of us getting in the freezing and choppy waters.

I have to admit that we decided to cut it (sorry Mr Fisherman). We were able to pull it through to the other side. Luckily we had just hooked it and hadn’t taffled it so it just pulled straight out. Anyway, I was pretty mad abut it but Simon did the right thing and knotted it back together before throwing it back out.

Then just like that we were on our way again. The wind did pick up and we sailed most of the way there. Then the direction of the wind just wasn’t in our favour and the seas were getting a bit rolly and confused so we reluctantly put on the motor and put the sails away. Not long after that the wind picked up to over 20 knots – that usual Northerly bluster.

We had two options, head down to Lagos or try the anchorage at Beleeira. We were feeling pretty rough and didn’t fancy another three-hour trip to Lagos so we hoped the anchorage was protected and headed in. In the outer harbour the wind was still at 20 knots and in the inner harbour it was still the same.

In the guide we’d read it said that there were three buoys near to the fishing harbour. Well we found a huge field of mooring buoys but after getting kicked off our mooring in Sesimbra that didn’t seem right. So we headed to the far end of the harbour near to the beach where we could see two or three moorings but as we approached the depth became too low. So we swung back around and took a mooring that we’d previously spotted. We decided to hang there for a while to see if a) the wind dropped enough for us to anchor, or b) we were thrown off the mooring by a fleet of fishing boats. Neither thing happened so we ended up staying there until morning. The only people we did see were very friendly and gave us a wave, a thumbs up or an OK. 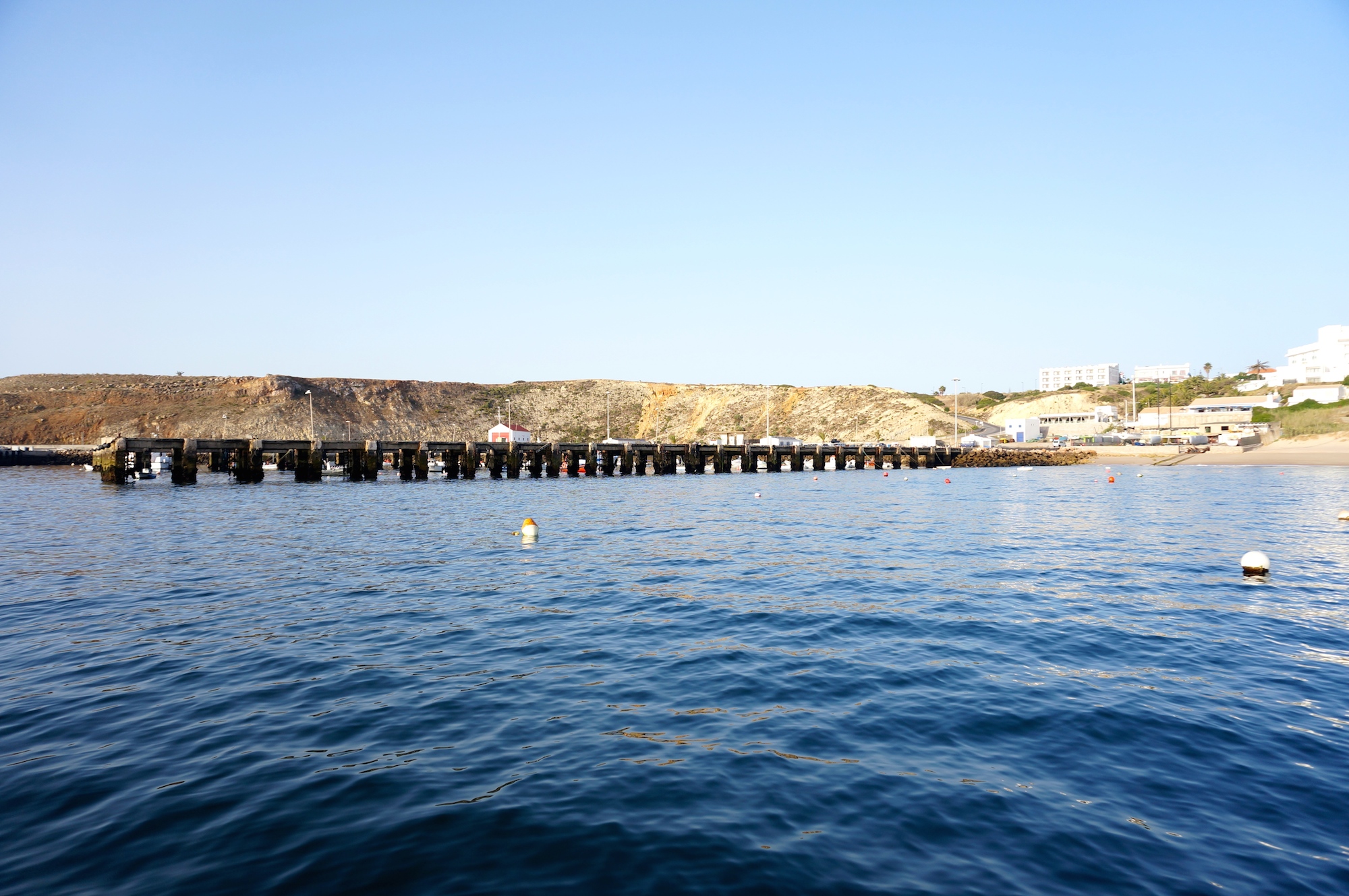