Although we’ve loved getting to know Sicily it was time to set sail and press on.

We’ve finally committed ourselves to doing the ARC rally across to the Caribbean, instead of wintering Interlude or visiting Greece, Turkey and Croatia. Our feelings are pretty mixed about this. We’re missing out these amazing countries that have topped our wish list but it leaves an awesome reason for an Interlude II sometime down the track and it means we don’t have to go back to work over Winter (winner!). As you can imagine we’re hugely excited and gigantically nervous about our planned Atlantic crossing and glad that we’ll be doing it with 250 or so other boats.

So that said it was time to press on West once again towards Gibraltar and our eventual departure from the Med – boohoo!

So after all but a short stay in Trapani, we were already preparing to leave for South Sardinia. We were up early, picked up some bread from the nearby bakery, went to the fish markets and grabbed some veggies (the fish stalls weren’t set up yet) and had a lovely coffee while we waited for the fuel dock to open. Actually we miss-ordered and got both a cappuccino and an expresso so I downed the lot and was feeling pretty awake!!

We hunted down the fuel dock, which is between the fishing harbour and the local yacht harbour, actually you can just follow the trail of diesel. This is the worst fuel dock we have been to. I jumped onto the dock to secure the lines and landed on the greasy concrete barely keeping to my feet. Then I had to clean them before getting back on the boat!

The fuel dock man basically fills your tank until it overflows, a lot, and then just says ‘don’t worry’ when you rush to stop it entering the water and covering your boat in the same slick of diesel that is now covering the dock and the water. Once that is complete you have to weedle your way back through all the litter in the water and random tyres that are tied both above and below the waterline, before setting out to sea and washing all the lines that you used to tie up at the dock as well as half the boat which is also covered in diesel.

After that we were running late by a couple of hours but hoping to make them up somewhere along the way. It’s a pretty big crossing and we were hoping to complete it in a day, a night and then arrive the following day before sunset. The days are getting shorter already so it’s giving us a bit of a challenge that way, it’s also getting a bit more autumnal all round. I think it’s the first time since Spring that we started the day with a hoody on. Yep times are changing.

By the afternoon we’d picked up some big winds and we we’re racing along in a ‘I’m loving this’ kind of a way. There were lots of birds around, also making the crossing but the other way around and not loving it so much. We were visited by a number of swallows (I think) and one was so exhausted she landed in our cockpit and then hid in our bookshelf for hours but unfortunately didn’t make it through the night. 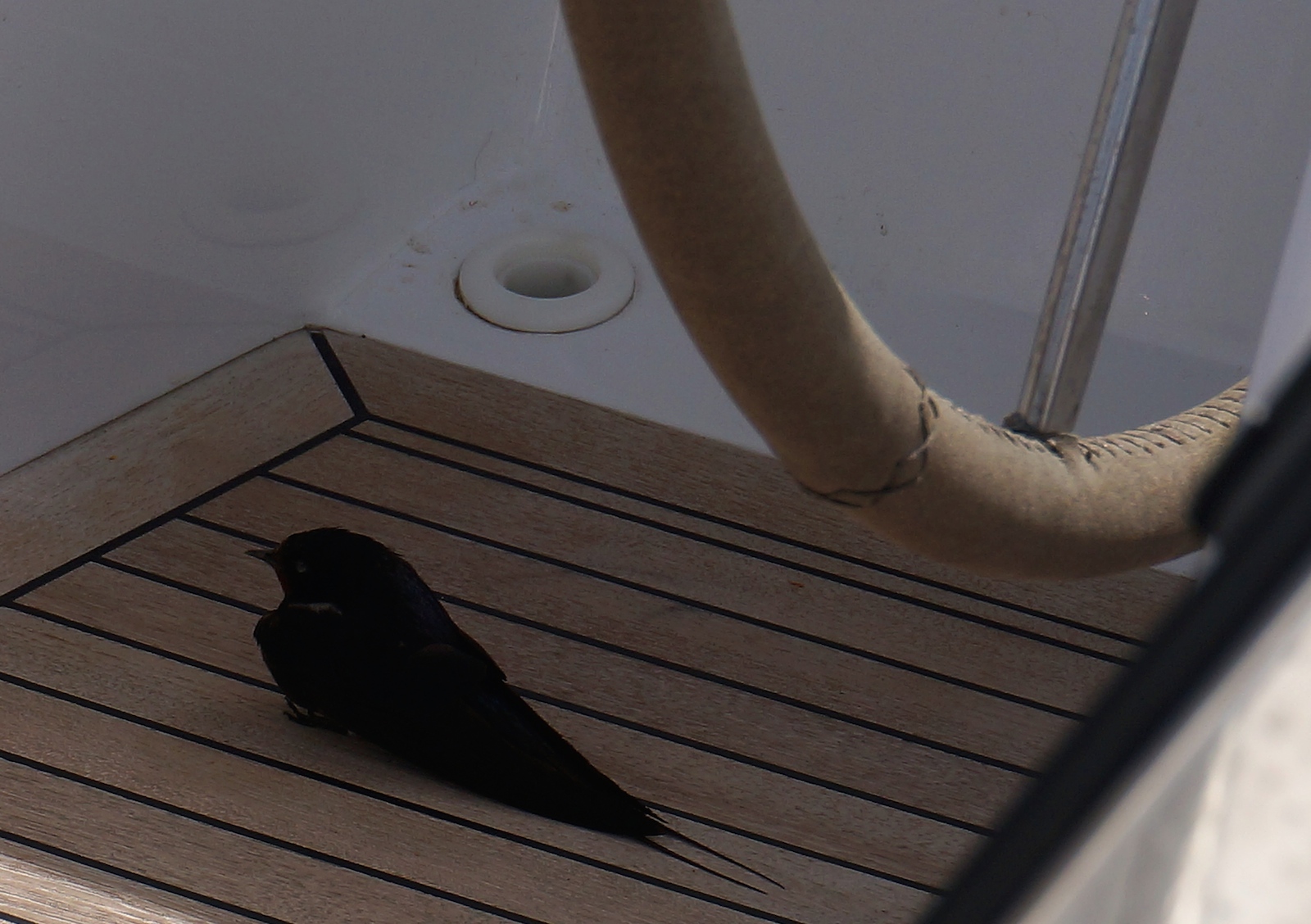 By evening we’d picked up some really big winds but luckily not before we’d popped in a couple of reefs in the main sail (so proud of ourselves for this). The winds were also pretty gusty which mean’t that we probably had less sail then we needed to most of the time, and were going slower that we should be, but the gusts had us too scared to shake the reef out. This was not great for our expected arrival time which we stared at nervously. We didn’t want to have to do a night entry to an unknown harbour as it can be pretty tricky but we also didn’t want to hang around for hours at sea waiting for dawn again. We were headed to Cagliari too which is a pretty busy commercial harbour.

The next day brought little wind but blue skies. We motor-sailed, then motored as the wind continued to drop. We finally came to the conclusion that we were not going to make Cagliari before sunset and started eying up Villasimius, a marina just a little further South. Villasimius was a great and well-need bolt hole and we were much relieved to make it before darkness. There’s not really much there and so I think we’ll be setting sail again in the morning.

One thought on “Sicily to Sardinia crossing”