We had a bumpy ride across to Tahaa. The 8-10 knots of wind predicted on the GRIBS were exactly 10 knots higher, which is ok as we didn’t have much sail out and were making good speed, but it made for an uncomfortable ride, and with lots of cloud around we were on our guard. We managed to dodge the majority of the clouds until about 8am when Simon woke me abruptly from my snoozing with a call of ‘Squall – get on deck!’.

Of course, no squalls while we were safely in open sea, but as soon as we were in spitting distance of an island one comes and spins us 180 degrees. So we were heading full belt towards Huahine. Did I mention our destination was Tahaa? You wouldn’t know either way without looking at the Navigation as there was a blanket of rain descending.

Anyway we pulled in our head-sail, stuck the motor on and turned back on course. We ploughed into wind, waves and rain for the next five hours until we reached Tahaa. Then the clouds cleared and we made it into a sheltered little bay where we could begin to dry off.

Our first plan was to visit the Hibiscus hotel for dinner, but there was no-one on the mooring buoys so we decided to take an exploratory tour of the head of the bay. Here was a little town-ship under construction, with cranes and machinery and other industrial buildings. Hmmm didn’t look too inviting so we headed back to the Hibiscus and radioed in for a mooring and dinner.

Dinner was great. It was one of those little places that here they call ‘pensions’ but back home we would probably call a B&B or boutique hotel. The gentlemanly owner greeted us in typical French style which meant that I got two kisses on the cheeks – sweet. There were no other guests but the owner sat down on the next table with a friend for dinner so at least it didn’t feel too uncomfortable. We’re getting used to the emptiness of some of these places – I’m not sure how we’ll feel when we return to Sydney/London and have to wait to be seated or fight at the bar for a drink.

There was no menu, no talk of what was to come, the food just arrived – which is ok with me. In fact it was yummy and probably exactly what I would have chosen if given a choice. Fresh tomatoes and mozzarella in a delicious olive oil for starter, fish and veggies for main and an apple tart for desert.

We made friends with the waiter and his beautiful 3-year-old daughter as well as the family dogs that sat at my feet. The dogs were very clean, well-behaved and had lovely soft ears plus they kept the local stray dogs at bay. Yep these lovely people and animals made us feel right at home. 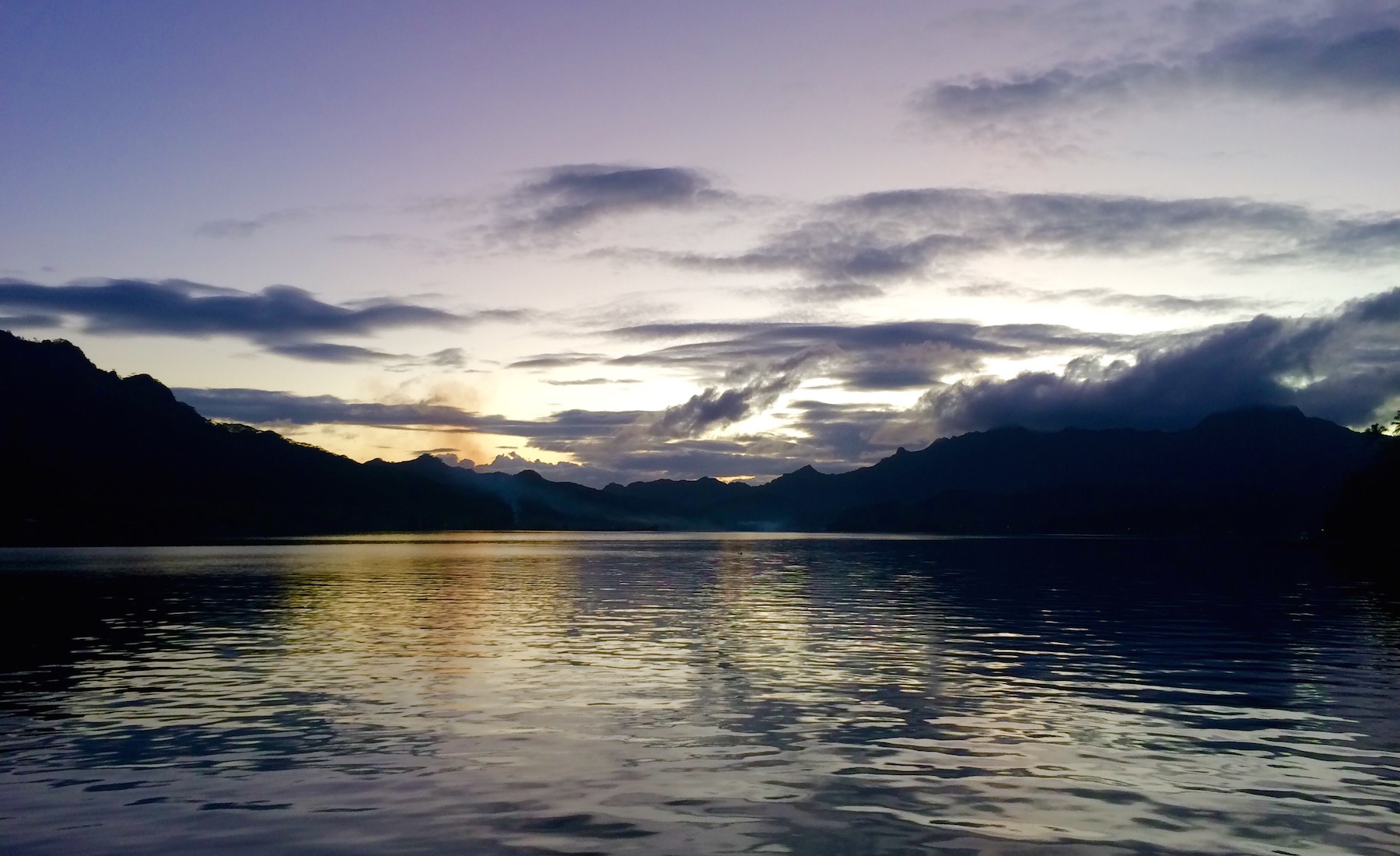 The next day we decided to head for the Coral Garden which we were pretty excited about. There’s no information in the guide-books about this place (although maybe in the French guide that we don’t have but everyone raves about). So we were reliant on hear-say, blogs and other travellers’ reports.

First up, we heard of a place you could anchor behind the Coral Garden where you could stay overnight and see the sunset over Bora Bora. We plugged in the co-ordinates and set off. Anyway we tried it and ended up with 0.80m under the keel, the anchor resting on a deep-sided, underwater cliff-face and decided it wasn’t for us. There was no-one else there either although we did see a cat there later on so maybe it’s cool for cats. 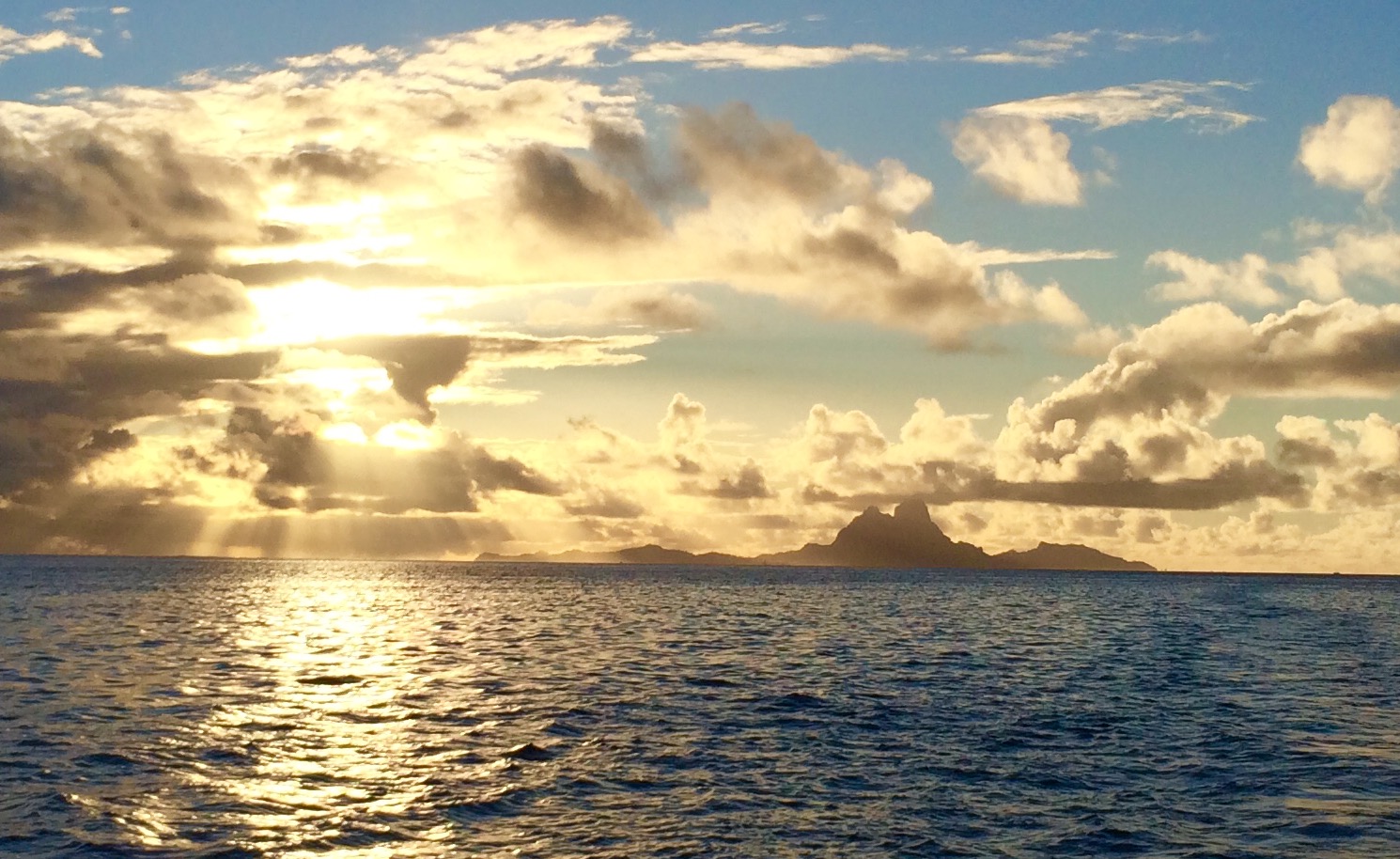 So we decided to go for the ‘day-anchorage’ closer to the Coral Garden. There were a few others here which filled us with a bit more confidence but also limited our anchoring options. It took us more than one go… ahem. Sometimes it’s hard to find the right patch of sand amongst the coral that’s not going to drop you next to a) another boat, b) the reef or c) the underwater rock that’s not charted and is out to get you. Anyway through this process we’ve finessed some of our communication issues and hope for better luck next time.

We eventually anchored in between two charter boats and Simon jumped in (again) to check on our anchor. Ours was set in a patch of sand surrounded by coral. Ok so it could have been 10m further forward which would give us more space between us and the cat behind us but not too bad. Besides which the cat behind us had his anchor upside down and the smallest bit of chain in, so should the wind get up and drag us in his direction it would surely drag him further back – perfect!

We had lunch and tried to figure out where the Coral Garden was by watching the other dinghies coming and going. It wasn’t where we thought it was but followed the others all the same. We dinghied in to where there were buoys and tied up as it was too corally to drag the dinghy up on the beach. We arrived at ‘the Coral Garden restaurant’ which sounded promising and asked around. Seemed we needed to swim to the motu opposite, walk the length of the island and then swim back between the islands with the current and among the Coral Garden. So off we set.

A motu (if you didn’t know) is a small reef islet. Which means they’re made of coral. We’d forgotten to bring our reef feet (aka reef shoes, flip flops, thongs etc) so it made for a treacherous tip-toe, all the way along saying, ‘this is stupid, should have brought our reef feet…Owch!’ Yes we know coral can be dangerous so fingers and toes crossed that we don’t get infected!

We eventually got close to the end and were making our way into the water when the guys from the boat behind us popped up and we started chatting. Ten minutes later Simon realised we were being bombarded by a squadron of mosquitos so we made a swift exit.

The Coral Garden drift-snorkel is exciting or amazing depending on where you start. Me, I started close to the shore and took off on an exhilarating, fast ride where you have to make swift decisions about whether to go right or left to avoid the stunningly-colourful coral heads. It certainly makes you wish you hadn’t eaten so much pizza. In ten seconds flat I was relieved to find myself at the far end and tried to take in what I’d seen.

I turned around to find Simon still at the start of the coral garden… meandering. Yes in the centre of the river the water runs slower and you can take your time. This one is definitely the one for the oldies! Ha ha!

As he got to about half-way down he started some animated calling so I headed up against stream to find him, finding Nemo! We mooched around for a bit with the fish and found Nemo again hidden in the anemones. What amazing snorkelling. The fish are obviously used to being fed and will come right up and surround you. They’re so docile you can poke them – yuck!

We eventually found ourselves back at the bottom of the garden and debated going again but it had clouded over and we weren’t sure about walking on the coral again. It’s one place we definitely want to come back to though 🙂

When we got back to the boat, Simon swam on the anchor again (still set) and the anchor of the cat behind us (still up-side-down) so did the charitable thing and told them. But then once aboard Interlude the weather started to look sketchy and the worry-lines appeared. The wind had picked up earlier than predicted and the clouds looked unruly so with the light fading we sped down to Apu Bay to pick up a free mooring for the night.

Tomorrow we will try to go to Bora Bora early to ride out this rubbish weather that’s set to get worse.

One thought on “Tahaa”