Getting into the atoll of Rangiroa was a crazy ride! An atoll is a ring of reef, Rangiroa being the second biggest in the world. The whole area was once a huge volcano which has now sunk back into the sea leaving the reef behind. On Rangiroa there are two breaks in this ring allowing boats to get in and out. The challenge is timing it correctly!

Before we left the Marquesas we did our research to get the tidal information, although none of it is exactly conclusive. The idea is to time the tide so you hit it at slack, hopefully with a slight current in your favour to push you through the pass. The currents in these passes can reach 7-8 knots- faster than our engine can drive us. Get it wrong… Oops, boat on the reef!

After confirming via radio that we had the correct times we headed into the pass. Washing machine time! Interlude got thrown all over the place, we got caught in rips left, right, and centre and at one point at full revs were making just one knot of boat speed.

Five mins of this and then suddenly calm. Once inside the reef protects you from the ocean and everything became flat. What a five mins though. Was pretty scary and we thought we’d timed everything correctly! I wouldn’t want to try it at the wrong time. After talking to some of the local dive shop owners it turns out the weather conditions have a huge effect, more than we’d read about. As we’d had a few days of 20+ knot winds the timings you’re meant to use go out of the window. Even the local guys have real problems at times and need to check conditions before heading out.

Once inside we headed over the the anchorage and played our favourite game of, lets try and drop the anchor in a perfect patch of sand without hitting any coral nearby which could snag the chain. After an hour of this game we were well over it but managed to get the anchor dug into a good area of pure sand, even if the chain did instantly wrap itself around a patch of coral, we’ll deal with that when we leave, ugh.

There really isn’t anywhere that great to anchor here. One of the dive shop owners is planning on installing mooring balls- good idea mate! I think most people would chose that over getting their anchor stuck (apparently he has to dive to free chains all the time), plus the poor coral wouldn’t keep getting hammered by boats all the time.

We crashed after our taxing passage staying on board and resting. Next morning we headed over to the fancy Kia Ora hotel right in front of our boat and asked what we could do here, booked a few things via them, had a nice lunch and some beers and chilled out for free while hotel guests gave us slightly funny looks. 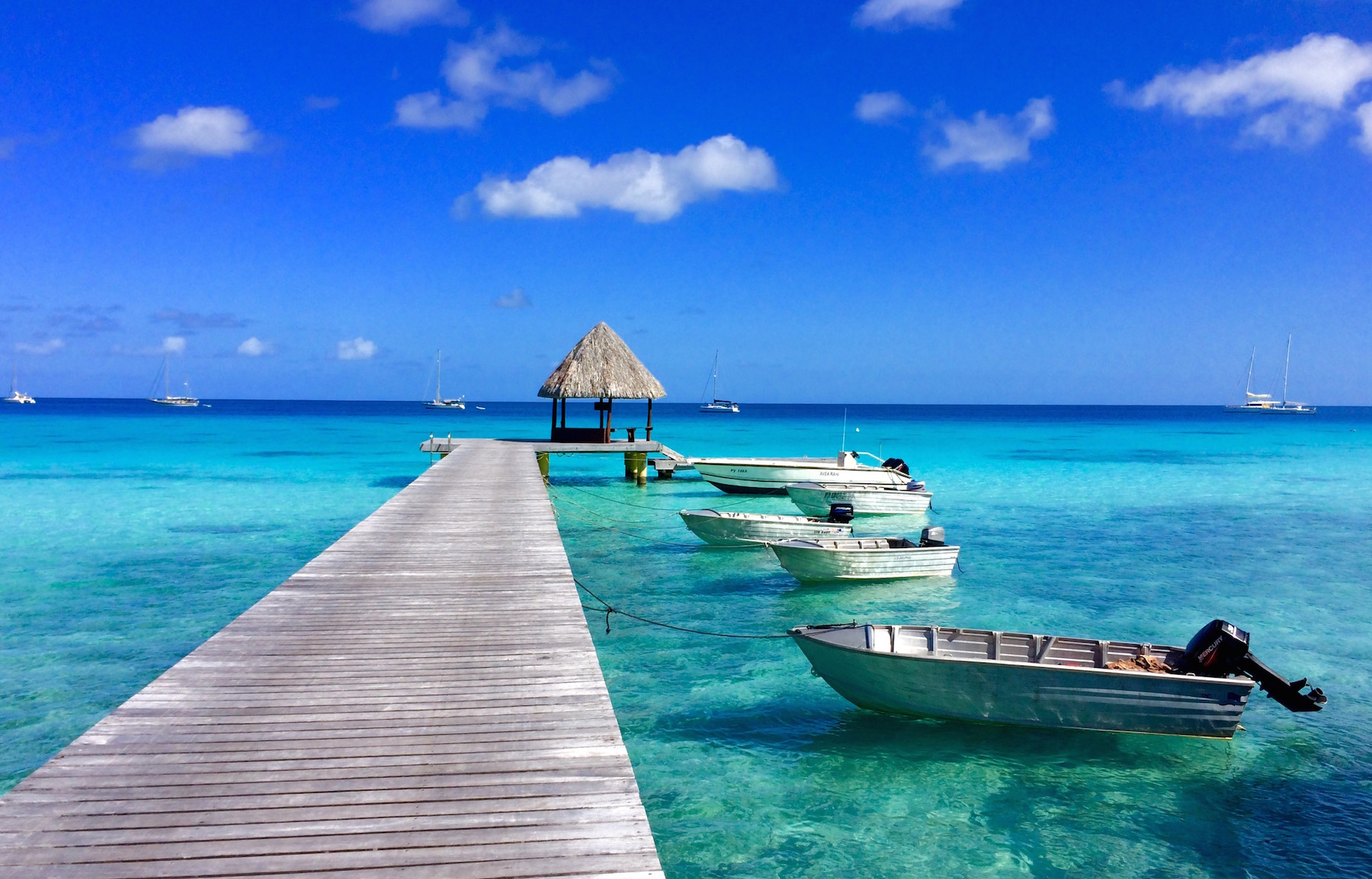 That night we had an amazing meal at the hotel while they put on a traditional dance show. A load of the locals took part and of course poor Helen and I got dragged up to join in with the festivities with some of the hotel guests. All the guests had the same bit of music to dance to with one of the locals leading the way so I thought I knew the drill but come our time the music slowed to a single drum beat and the local guy dancing with us basically performed some kind of mating dance from what I could tell. I was a 3rd wheel while he was getting his grind on with Helen, all a bit embarrassing really but done in good spirits (we were glad when it was over though!). 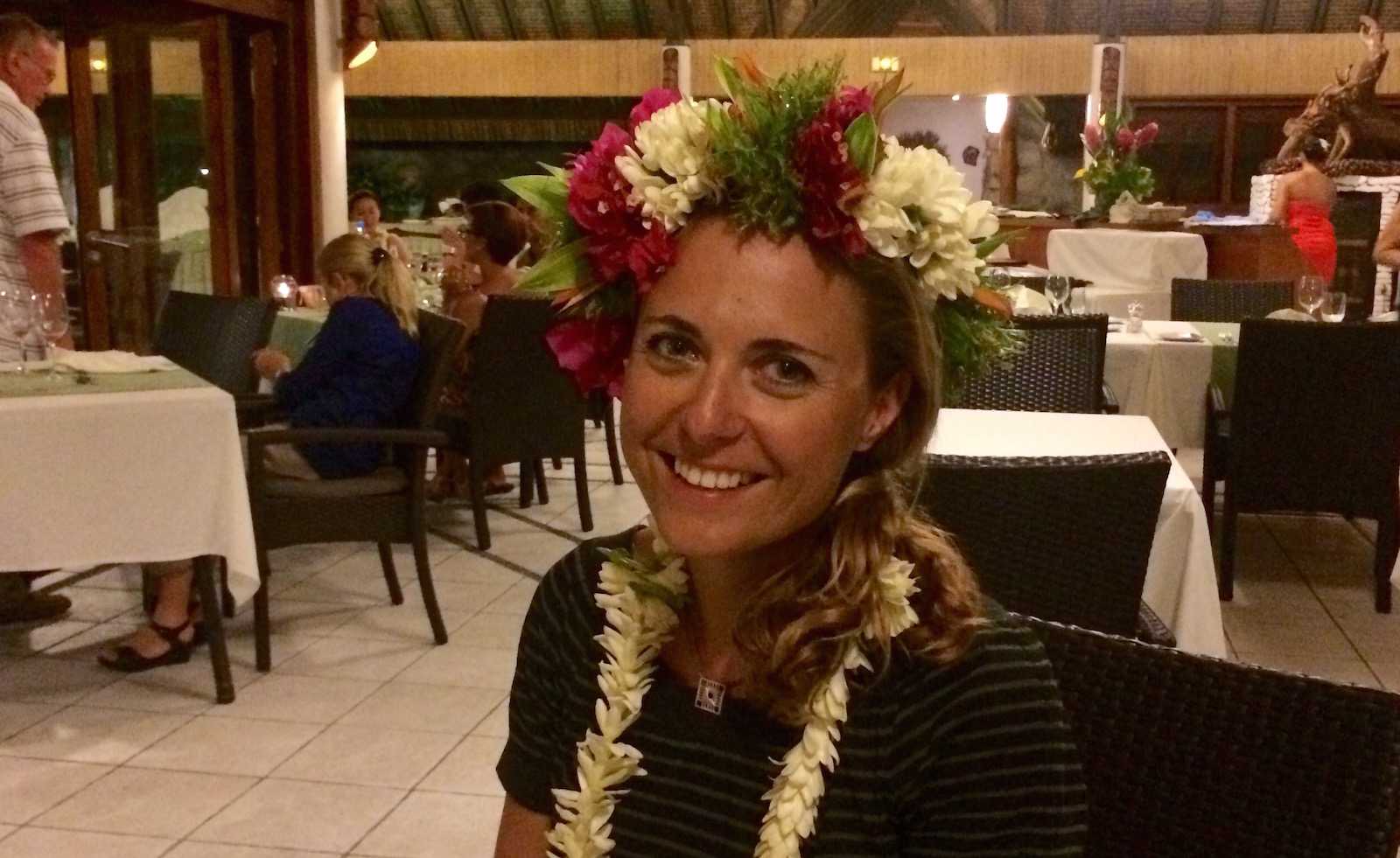 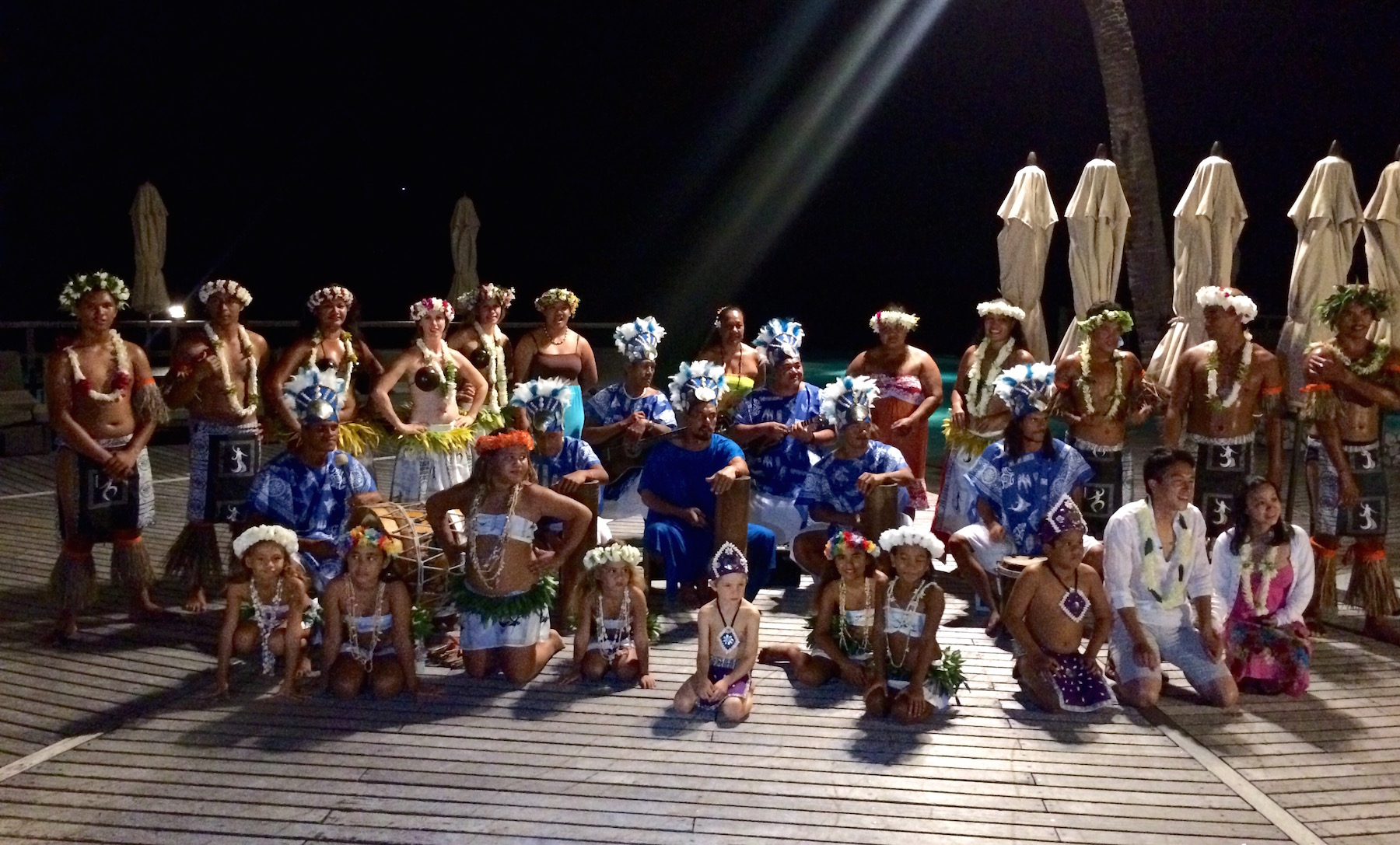 Day after we hired some bikes from the Kia Ora and explored the island. There’s not a huge amount going on here but we really love the vibe of the place and everyone is so friendly.

On the way back to the Hotel we stopped by the Pearl farm and got a tour from the owner. We never knew how much work goes into growing pearls, operations, grafting bits of shell in, incisions into the membrane at precisely the right time, etc. I just thought they, you know, grew inside and that was that.

Rangiroa is known all over the world for the quality of their black pearls and I have to say they are stunning to look at. After the tour Helen spent some time picking out her perfect pearl which the owner quickly turned into a pendent, a great reminder of this part of the trip, and Helen’s birthday present is sorted two months ahead of time- result! 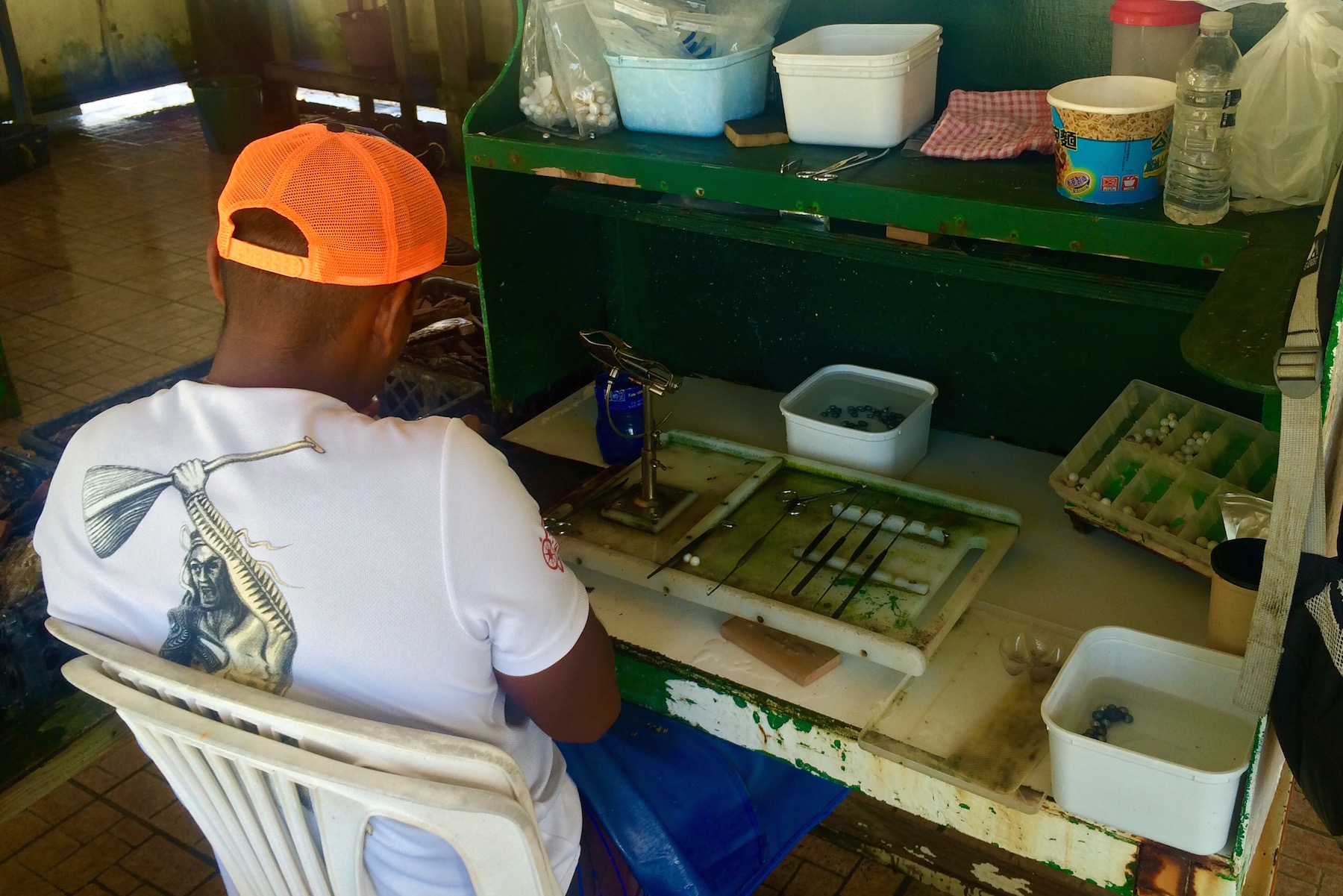 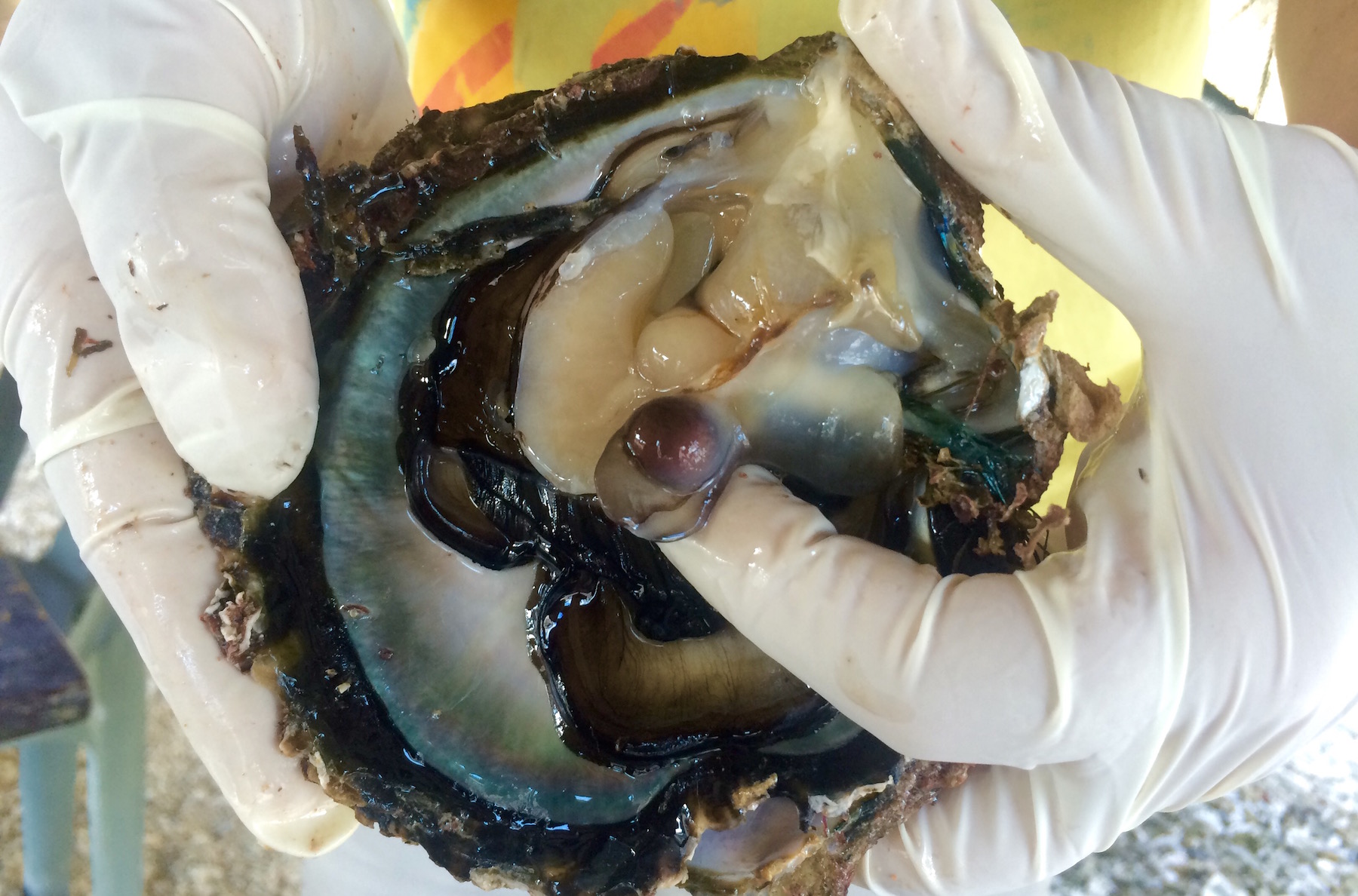 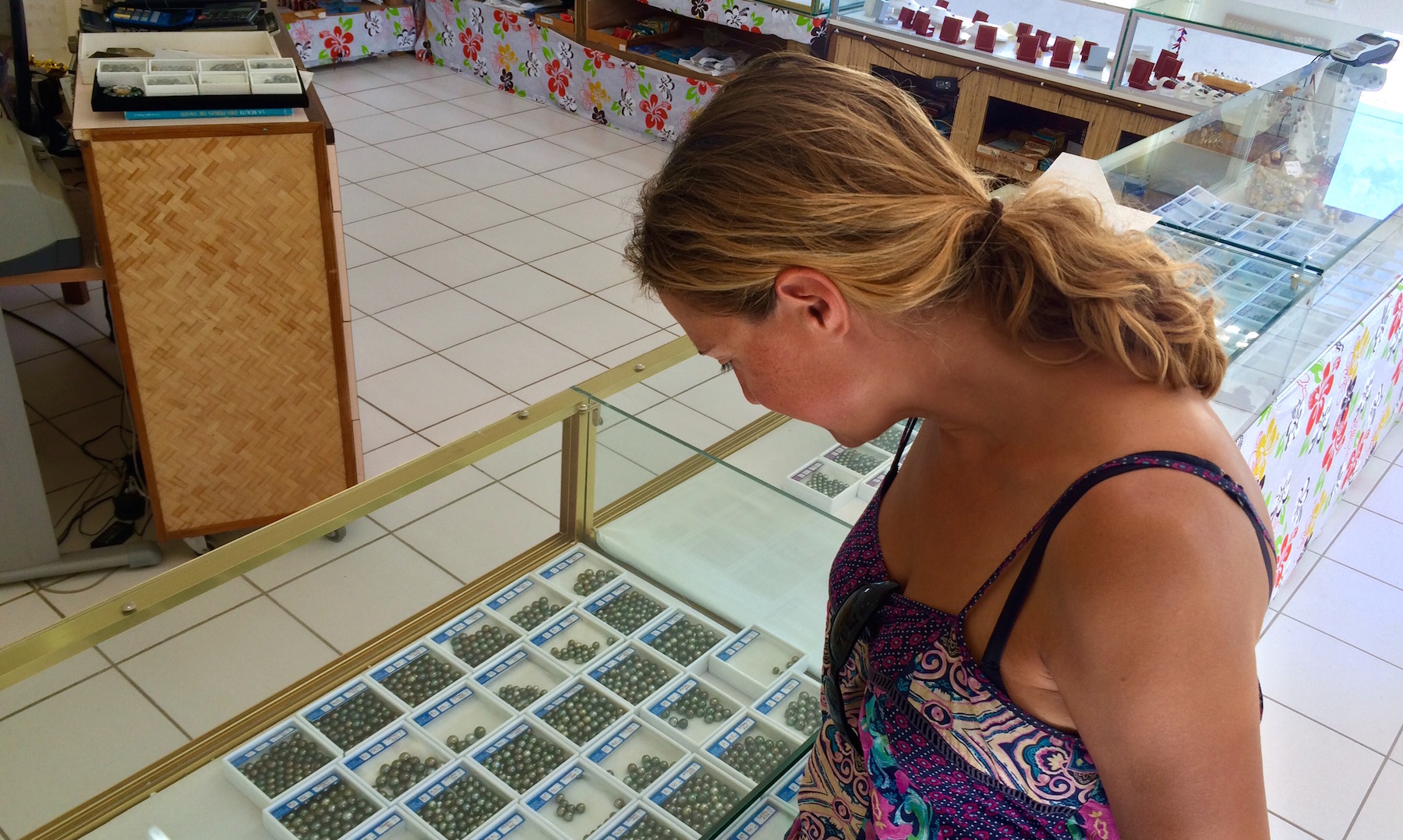 Riding bikes in the heat here almost killed us so we retreated back to the Hotel bar for some cold beers to recover. Doctors orders!

Day 3 we headed out on a tour to the area about 20miles from the main settlement called the Blue Lagoon. Reminded us loads of the San Blas islands, the whole area was stunning with colours to vivid they almost look photoshopped on photos. 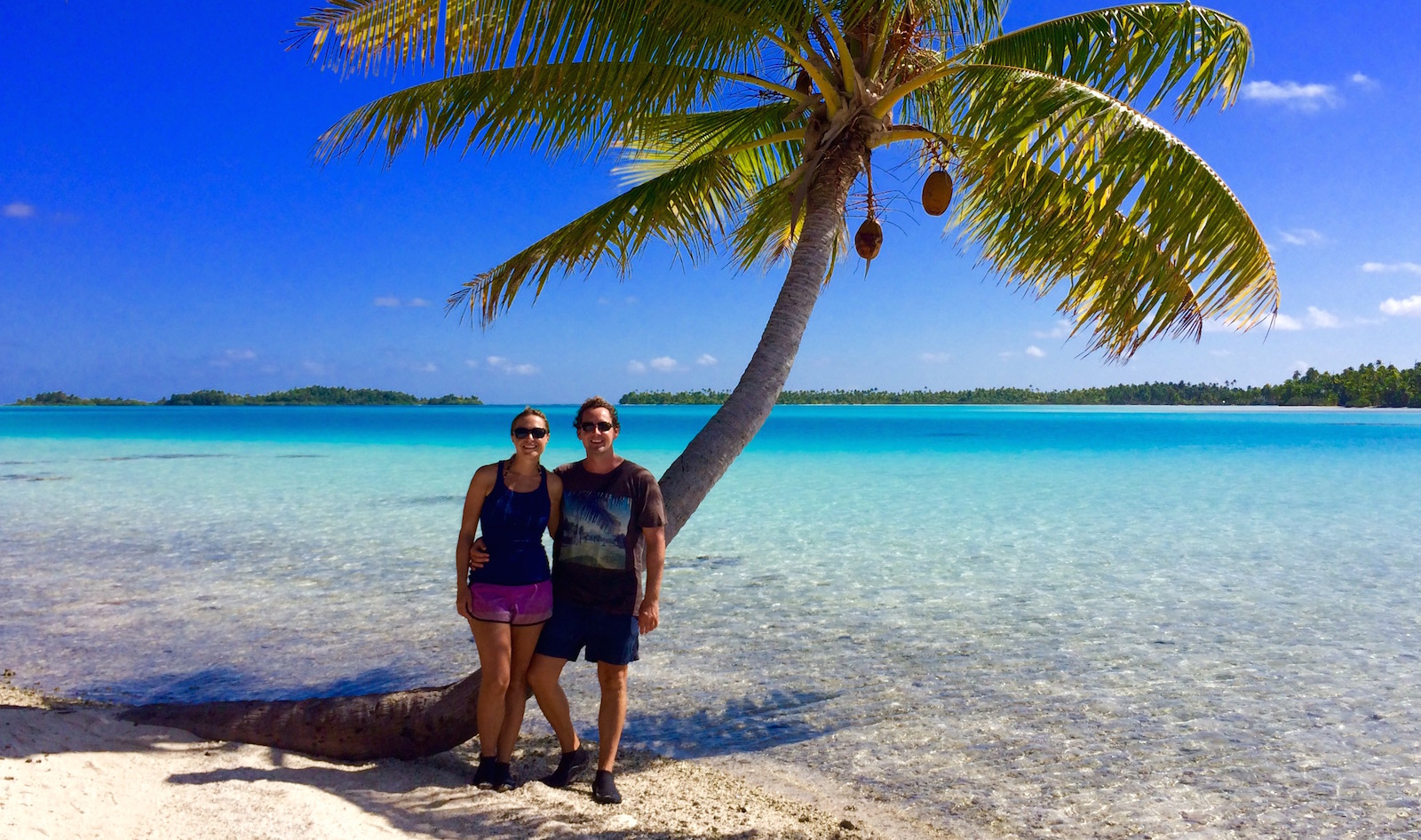 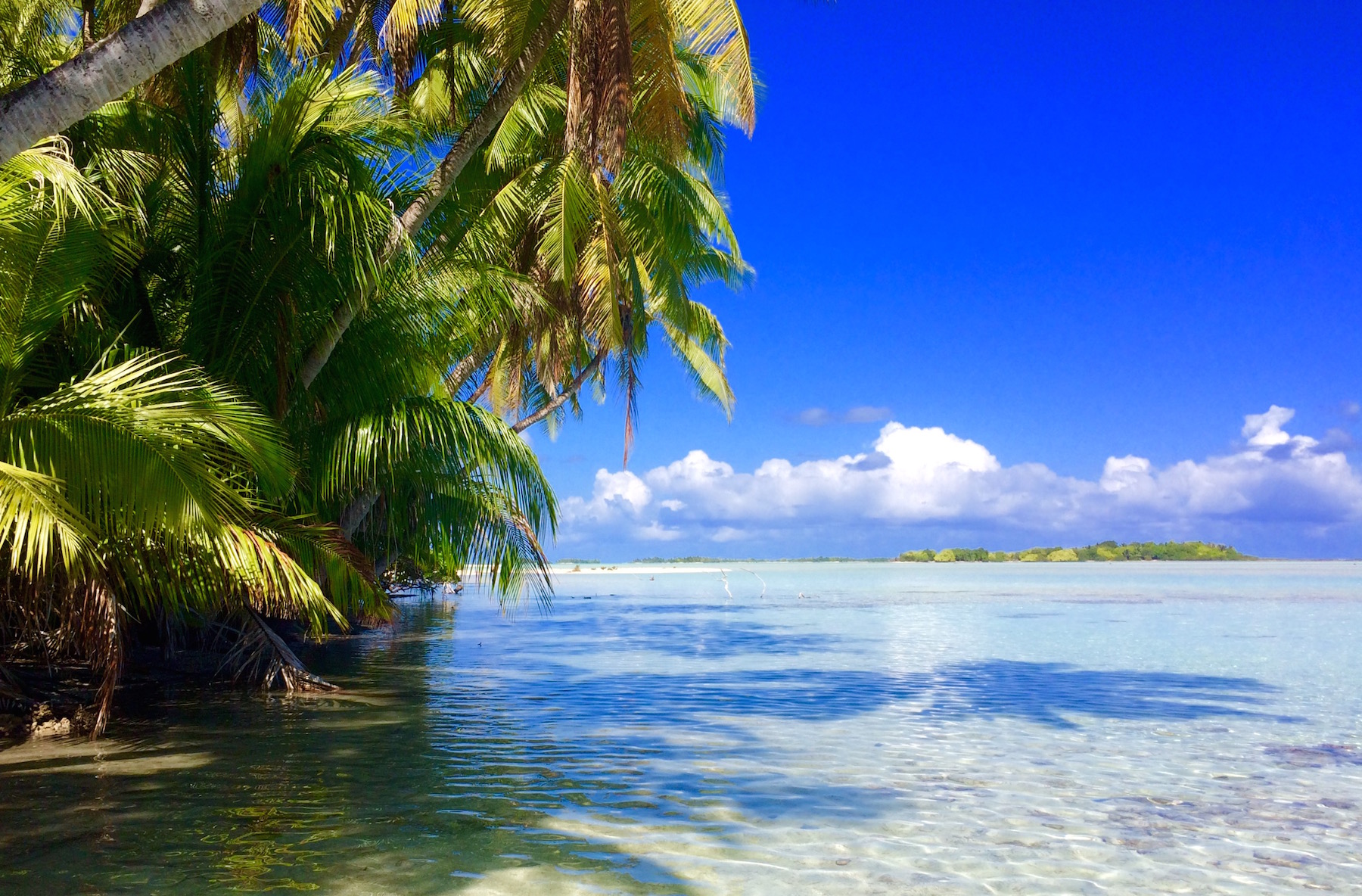 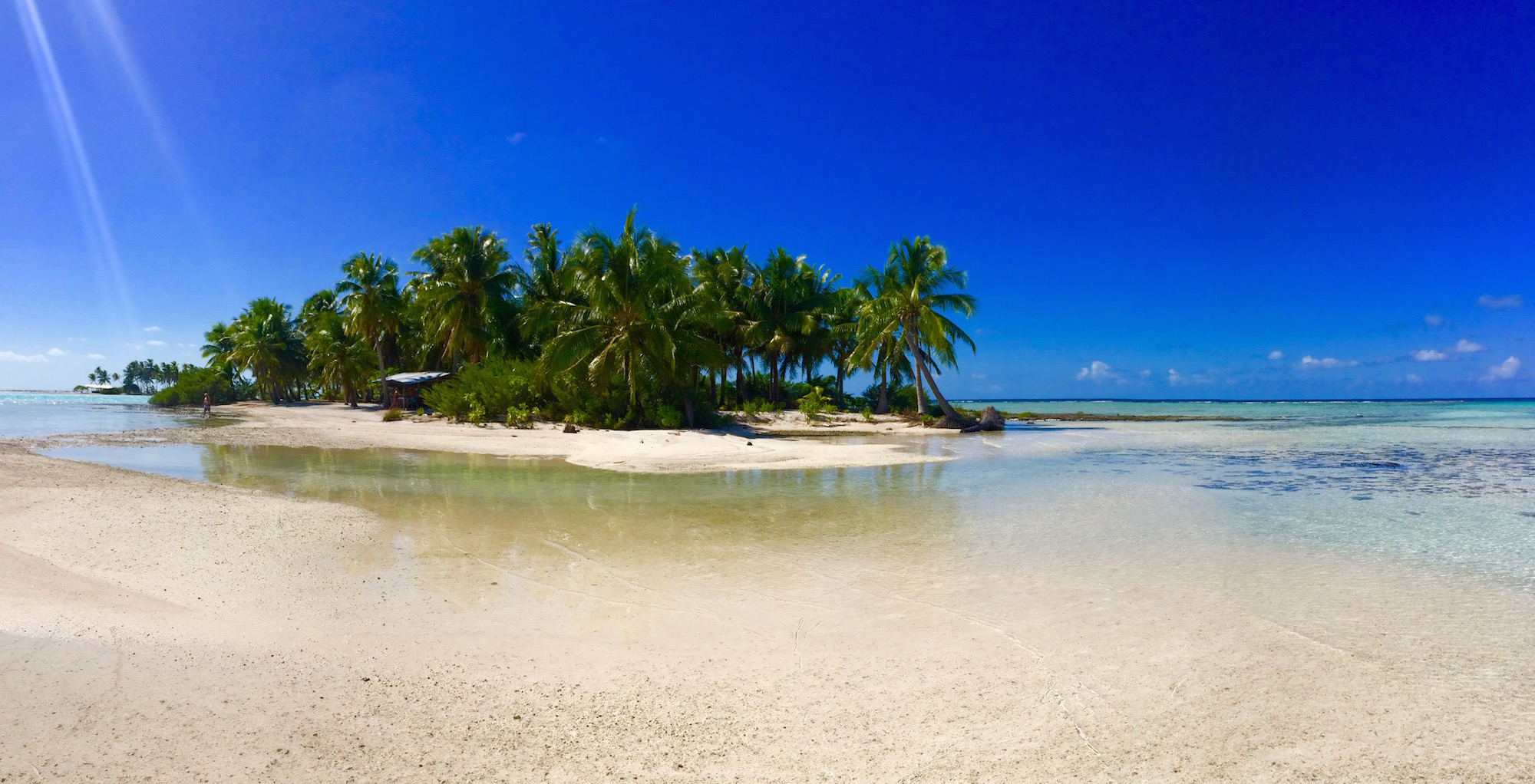 The day was spent chilling out on the little islands, swimming in the crystal clear waters, snorkelling with sharks (which was a bit full on at times as they wanted feeding!), and enjoying the great tour guides who kept us entertained. 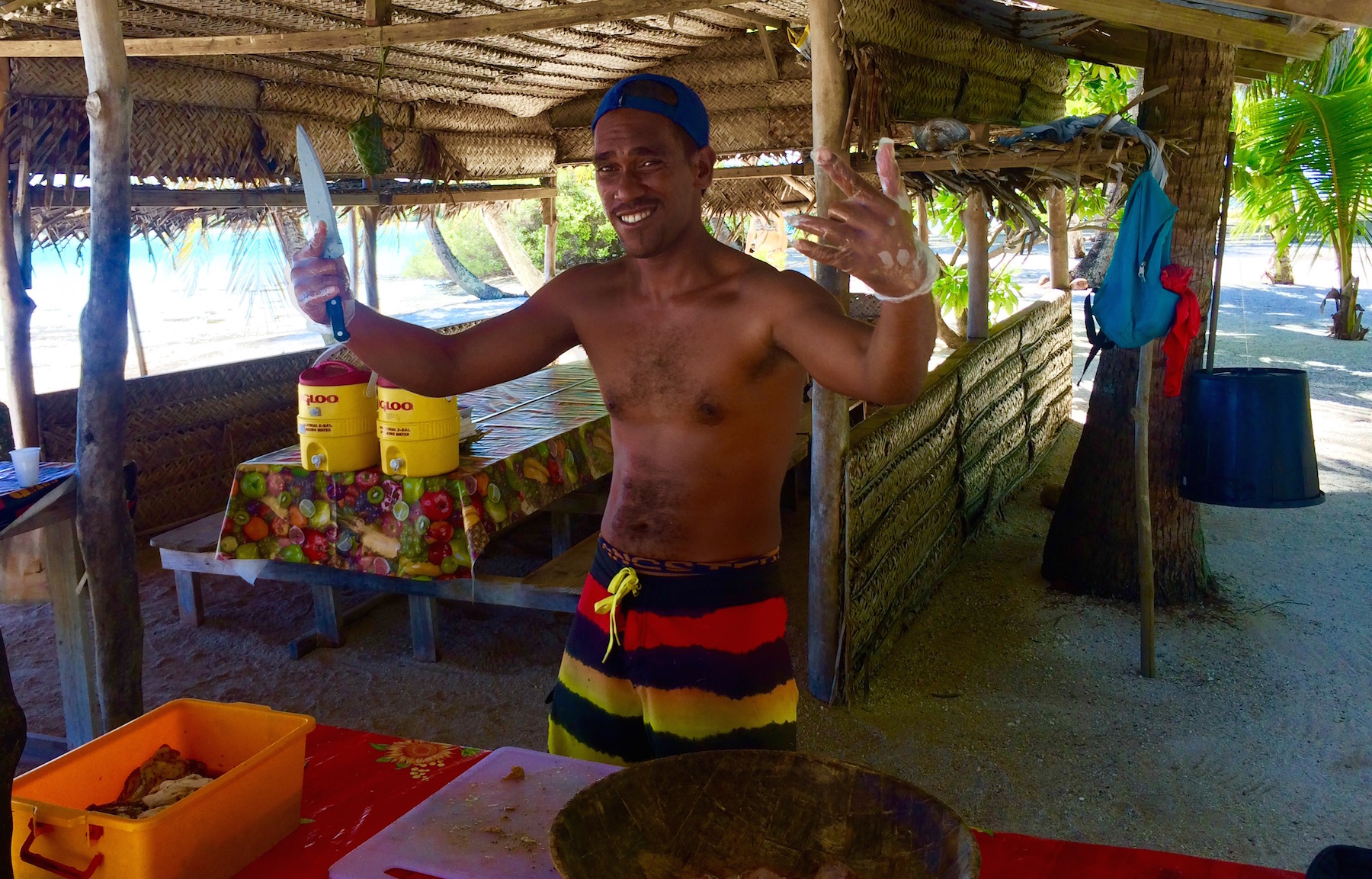 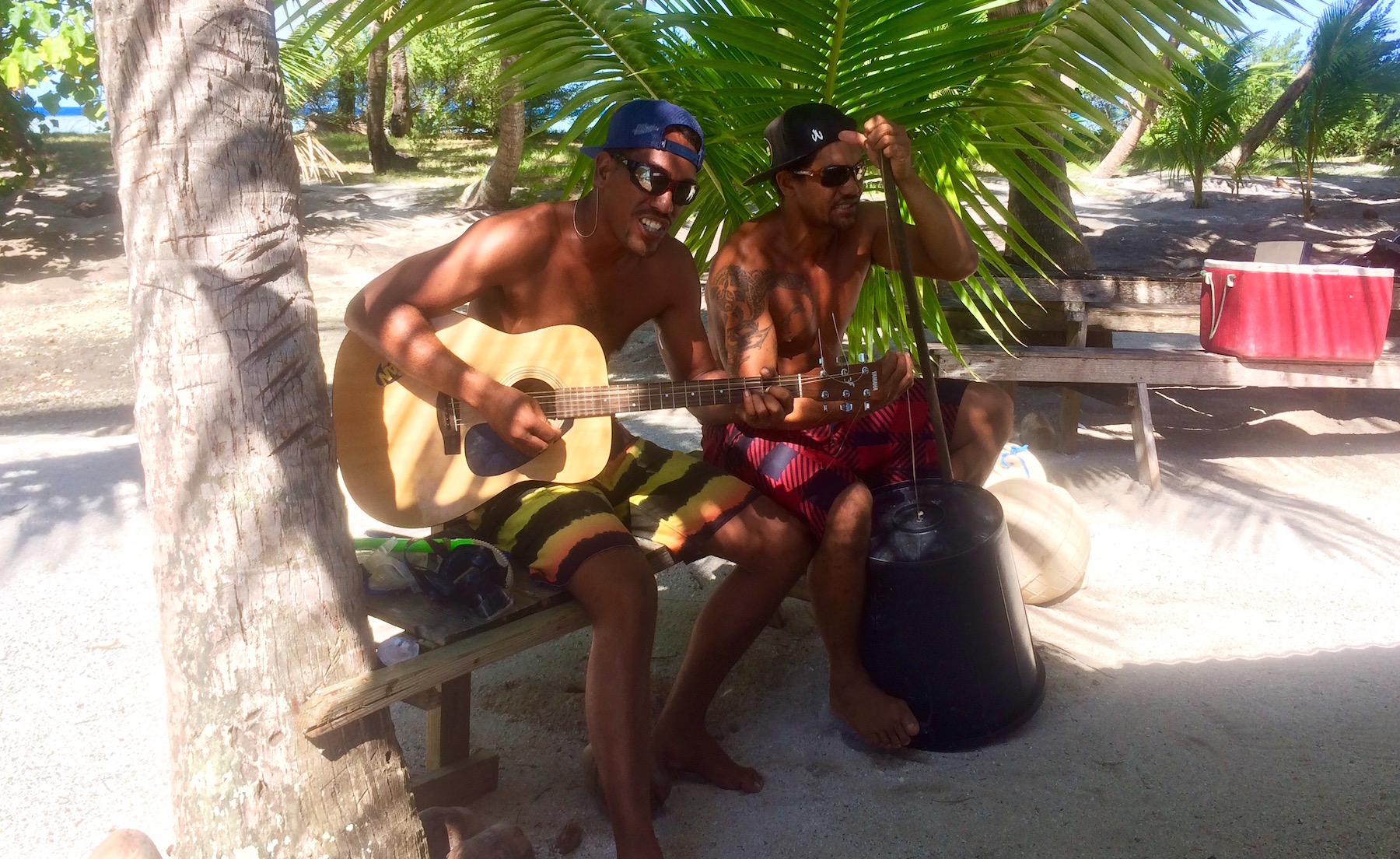 We don’t normally go for the whole tour thing but really enjoyed chatting to everyone. We did start getting a little freaked out though when it turned out the husband of one lady we got talking was very close friends with my boss in Sydney! And then a young couple on honeymoon here freaked us out even more…

Us: “Used to live in Coogee but before that lived in Bondi Junction”.

Them: “Bondi Junction is where we live!!! What street?”

Us: “Corner of Bronte Road and Ebley Street.”

Them (now looking a little freaked out): “Er, what? Really? Us too.”

Things got even more weird when it turned out we all lived in the EXACT SAME BUILDING! Here we are in the middle of nowhere half way across the Pacific ocean and you meet people who lived a few doors down from you. We lived there a few years before them but still! What are the odds? Meeting someone who knows your boss, and others who lived in the same building on the same tour?! Maybe it was a glitch in the matrix or something.

After the Blue Lagoon we motored back to the other pass on the island and did some drift snorkelling. The current was racing along at 7 knots and I’ve never experienced anything quite like it.  You just float in the water and the current drags you along. If you want to go faster you just dive down and whooosh you’re zipping along looking up at others above you as you pass quickly under them. The coral and fish were amazing to look at. We immediately booked in some more drift snorkels as soon as we got back to the Hotel as it really blew us away.

We randomly met up with the lovely couple off King’s Legend, one of the boats we went through the Panama Canal with, and arranged to meet for a meal the next evening then headed back to the boat- what a day!

The following day was boat project time. The pesky steering cable issue was once again looked at and we’ve now got another temp solution to get us to Tahiti. There was one funny moment when we both had our rumps in the air out the back of the boat trying to feed a cable through an impossible pathway of wheels. We kept losing the cable and at one very frustrating moment I lost it and let rip some very colourful words only to turn to find two young local kids in dugout canoes right behind the boat checking out what we were doing. I think those kind of words translate quite easily as they paddled off quick smart.

It’s hard being in the middle of nowhere with these issues. We’ve got a few things we need to fix once we get to Tahiti now, nothing really show-stopping but we are limping along a little at the moment and like having Interlude in tip-top shape. It’s funny as when you talk to anyone on a boat they have the same problem. There’s really nowhere to get anything fixed between North/South America and Tahiti. A dead zone of about 3500 miles or so. I’m no businessman but to me that screams of what I believe is called an untapped, captured market. Sort it out someone and open a good repair facility! You’ll make a mint! (I want 20% of all profits for the idea though).

We met up that night with King’s Legend and had an amazing meal at a very French inspired restaurant looking out over the water. One the menu was part of the oysters the pearl farm have spare once their gems are removed. Was much better tasting than we expected and the tuna steaks from from the local fishermen that followed were top notch as well. Top all that off with a home made French tart and, well, who cares about boat issues?!

We did more drift snorkelling the next day mixed in with a healthy amount of lazing around the boat. We did pick up some supplies so we had a few things to eat on the way to Tahiti but the prices again are really making our eyes water. Nothing here is cheap. We love the place but honestly the cost of everything is making us, and a lot of others we know here, second guess a lot of what we do.

We felt like we’d experienced a lot of the atoll by this point so decided to get a move on to Tahiti. It’s going to be weird being in a large city after a place as remote as this. A contrast we’re looking forward to.