We wanted to press on North as time is again against us (when hasn’t it been on this trip?!). Our plan is to get up to Antigua then swing over to the BVI’s. I think Cuba is now looking unrealistic which is a shame but we’ll see how we go.

All the Islands are convenient day hops apart from each other and next up was Dominica. Even from 20 miles off shore we knew we were going to like this place. It’s impressive slopes and over saturated green colours gave us a taste of what was in store. 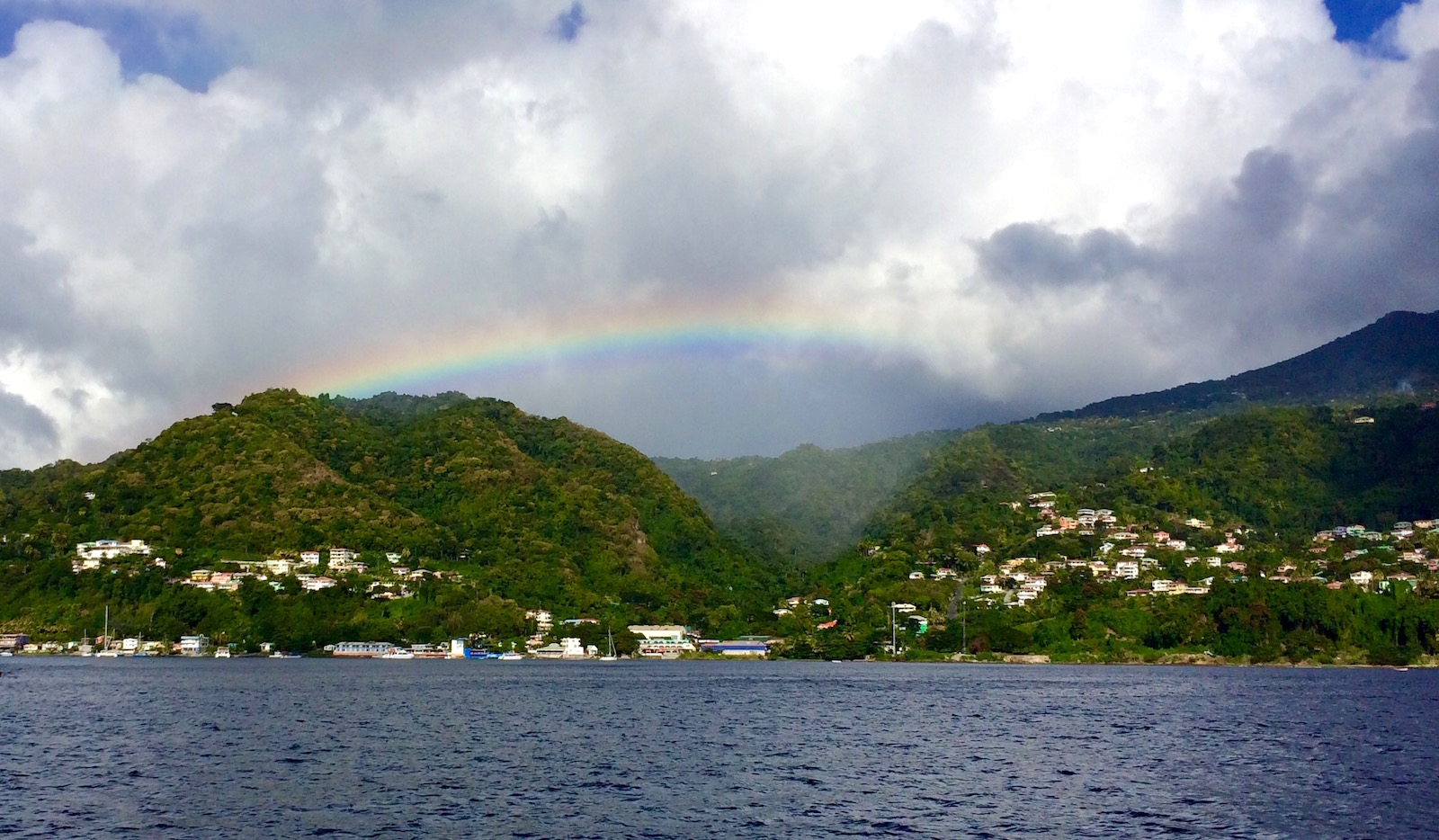 There’s only two main stopping points on the island, one in the South and the other perfectly placed for the next hop in the North.

The sail over from Martinique was amazing. We crossed over with 99 Bottles and Take Off in feisty conditions and the race was on! We pulled out of the bay first and did well to fend off the mighty 99 Bottles but they passed us as we approached the coastline. We managed to keep Take Off at bay which surprised us. Interlude is SO fast again! A nice clean bottom and all our sails working as they should meant we were hitting our hull speed of around 8.5 knots most of the way over. Was a great sail!!

Pulling into Roseau we picked up a mooring from ‘SeaCat’, one of the locals here, who runs the area. That night was again spent on 99 Bottles having an amazing meal of fresh fish stew prepared by the Take Off gang. By the time we left the boat should have been renamed 87 Bottles. 😉

Take Off and 99 Bottles wanted to push North the next day to catch up with another ARC friend Morning Haze. We agreed to join the next day but we wanted to see more of the South Island area first. We headed into town to clear into the country, very cool system here where you can clear in and out if you don’t stay more than 10 days. Smart guys, smart!

The town was full of life. A huge cruise ship was in dock so everyone was trying to sell this and that. It’s a shame these cruise ship tourists only get to see the polished little centres of most places. We wandered around for a while in the outer areas where things are more real. 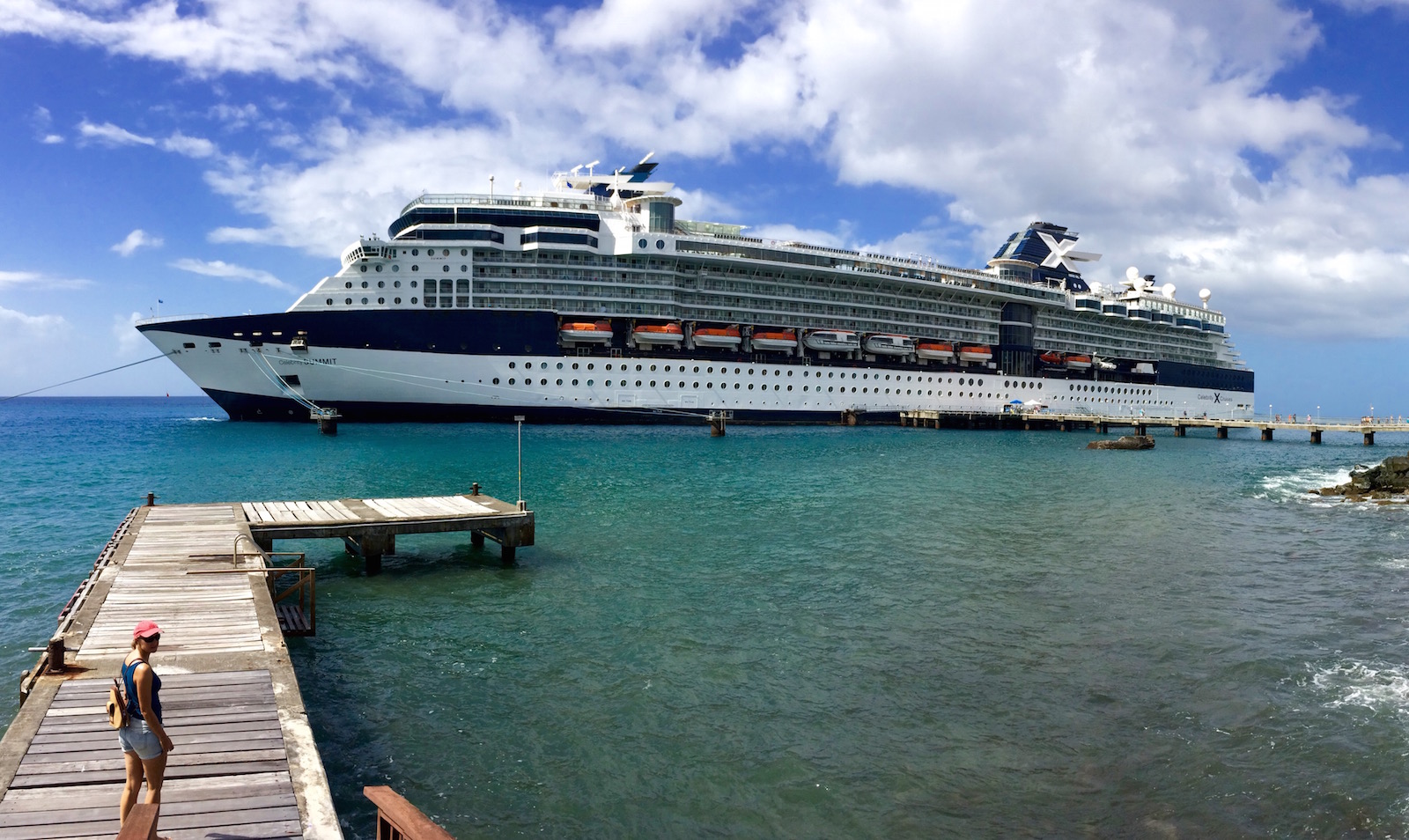 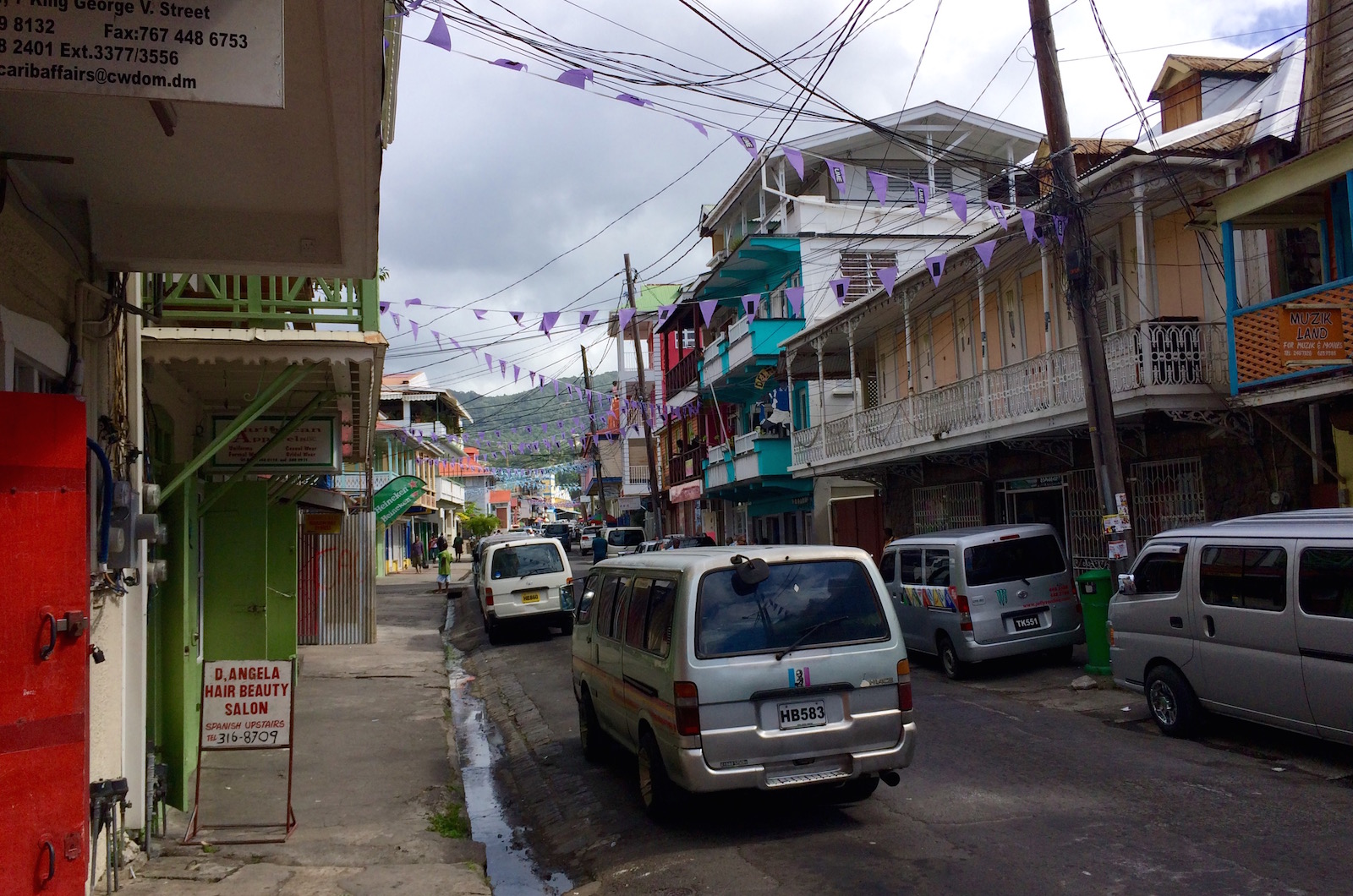 Back on the boat a quick radio call to ‘SeaCat’ and we had a guide booked to show us more of the island via some hikes. Twenty minutes later we were picked up from the boat and placed in the hands of ‘Stowie’ and ‘Beans’.

I love the nicknames everyone has. It’s not everyday your walking through a small town and hear… ‘Hey Batman!! How’s it going man!?’

‘Stowie’ said that crime is very low on the island as everyone knows each other and nothing stays a secret for long. I think it’s more to do with ‘Batman’, ‘The Flash’, and ‘Revenge’ living here. Who’s going to to mess with that lot?

The tour was simply amazing. Helen’s been looking forward to hiking around Dominica for a while and the day was spent really pushing ourselves and having a lot of fun.

First up was a little 8km hike deep into the rainforest. It was pretty tough going as Beans was setting a solid pace. We both kept up which I think surprised him. It sure surprised us as some of the terrain was hardcore. 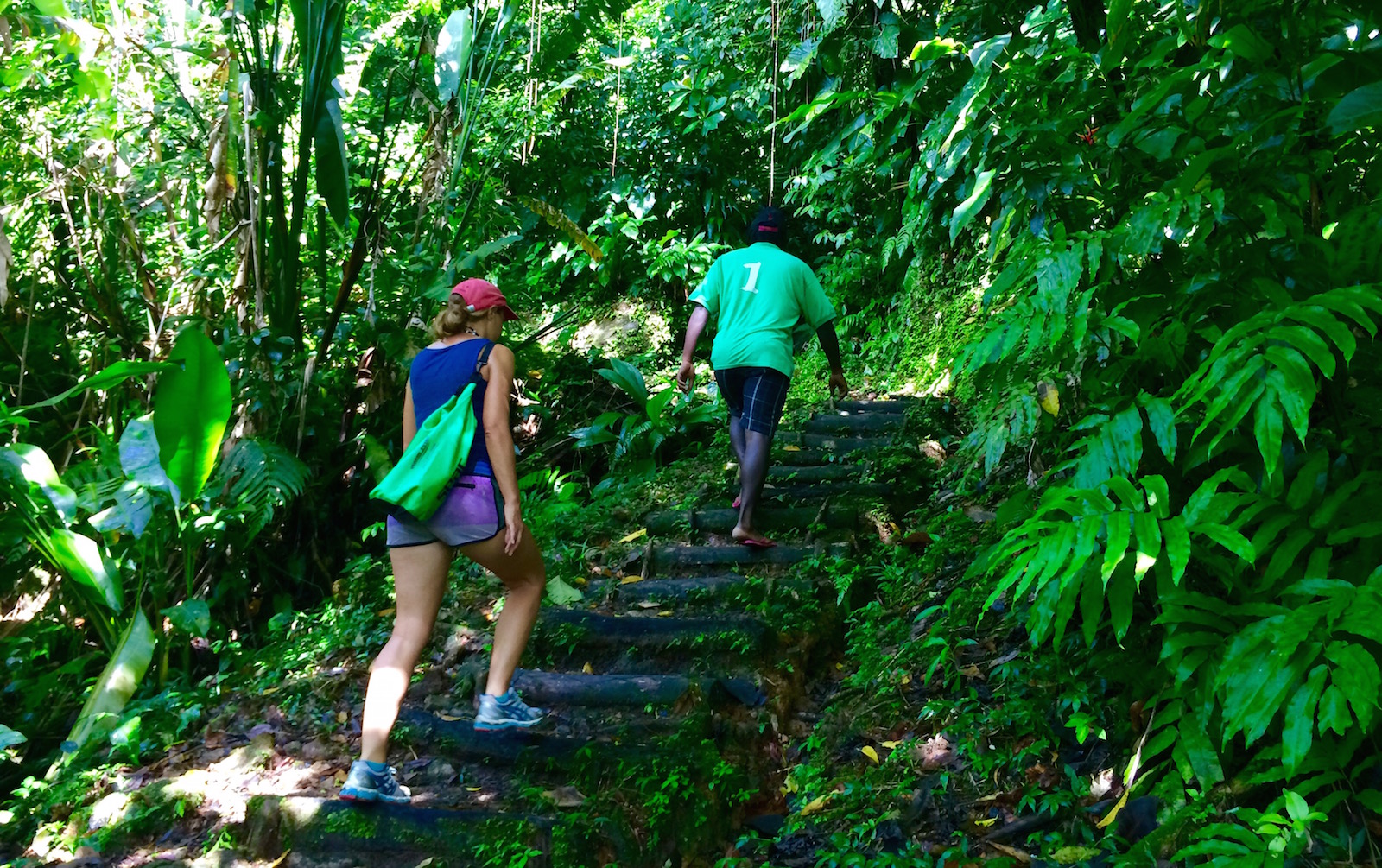 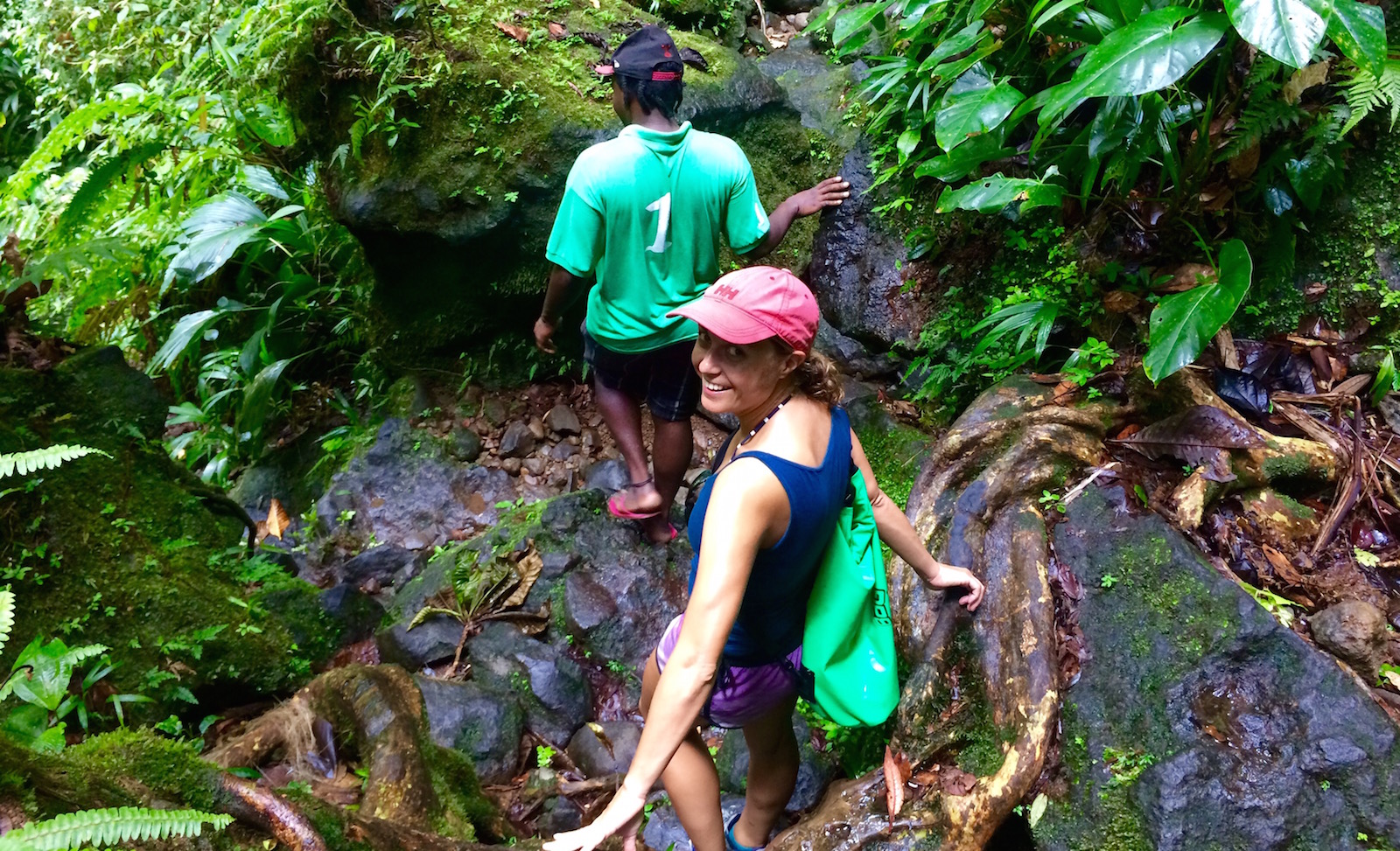 The reward for venturing so far was a breathtaking waterfall. The photo doesn’t do this place justice but diving into the cold refreshing pool while cascading waters smashed us senseless was something we’ll both remember for the rest of our lives. We were the only people around so had the place to ourselves. Beans said the tours go for the easier hikes and get crowded. 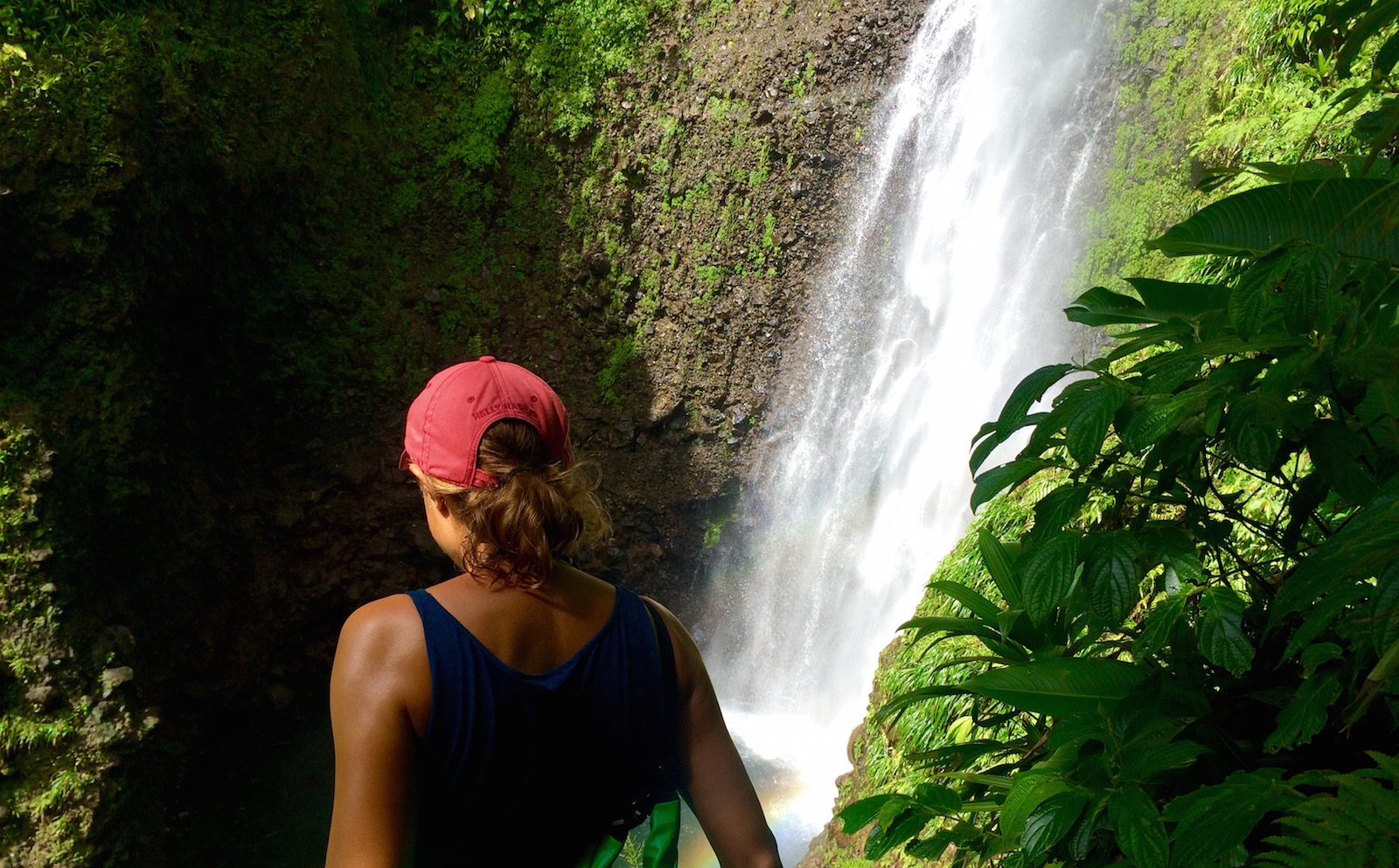 Once we’d hiked back to Stowie’s minibus he raced us around the island pointing out all manor of interesting facts. Was great to get some history about the place, see how they are rapidly converting from expensive gas power to renewables, and seeing some amazing views. We sadly heard about a few hurricanes that had done major damage to the islands some years back. I can’t imagine getting hit with 200 mile winds. Fingers crossed they are left in peace.

After the hike and drive around the islands we were taken to a waterfall that lands in a pool, feeding into a large series of caves and blowholes. The swim into these was interesting. You have all this water swirling around pushing you against the rocks. A few tour boat people turned up and had to wear all kinds of safety gear and adhere to this and that. Not Beans! He grabbed our arms and helped us climb up the face of the cascades into the ‘extreme’ section of the cave where the water was very strong. It was hard to keep a hold on the rocks as the water rushed past. Half the time I’d see Helen fly past as the current took her. Great fun though!

Beans saved the best for last telling us it was ‘safe’ to take a running jump over the side of the waterfall down into the small pool below. Helen wasn’t too sure about this so ended up on Beans back (she didn’t really get a choice) then on the count of three he jumped. Helen came back up from under the water a few seconds later huge grin on her face. I just said to hell with it and ran then jumped over the edge. Such an amazing feeling jumping into a dark pool of water in a small cave then having a waterfall smash you. Not sure what our travel insurance would have said about the whole affair but apart from a few cuts and grazes no damage was done. 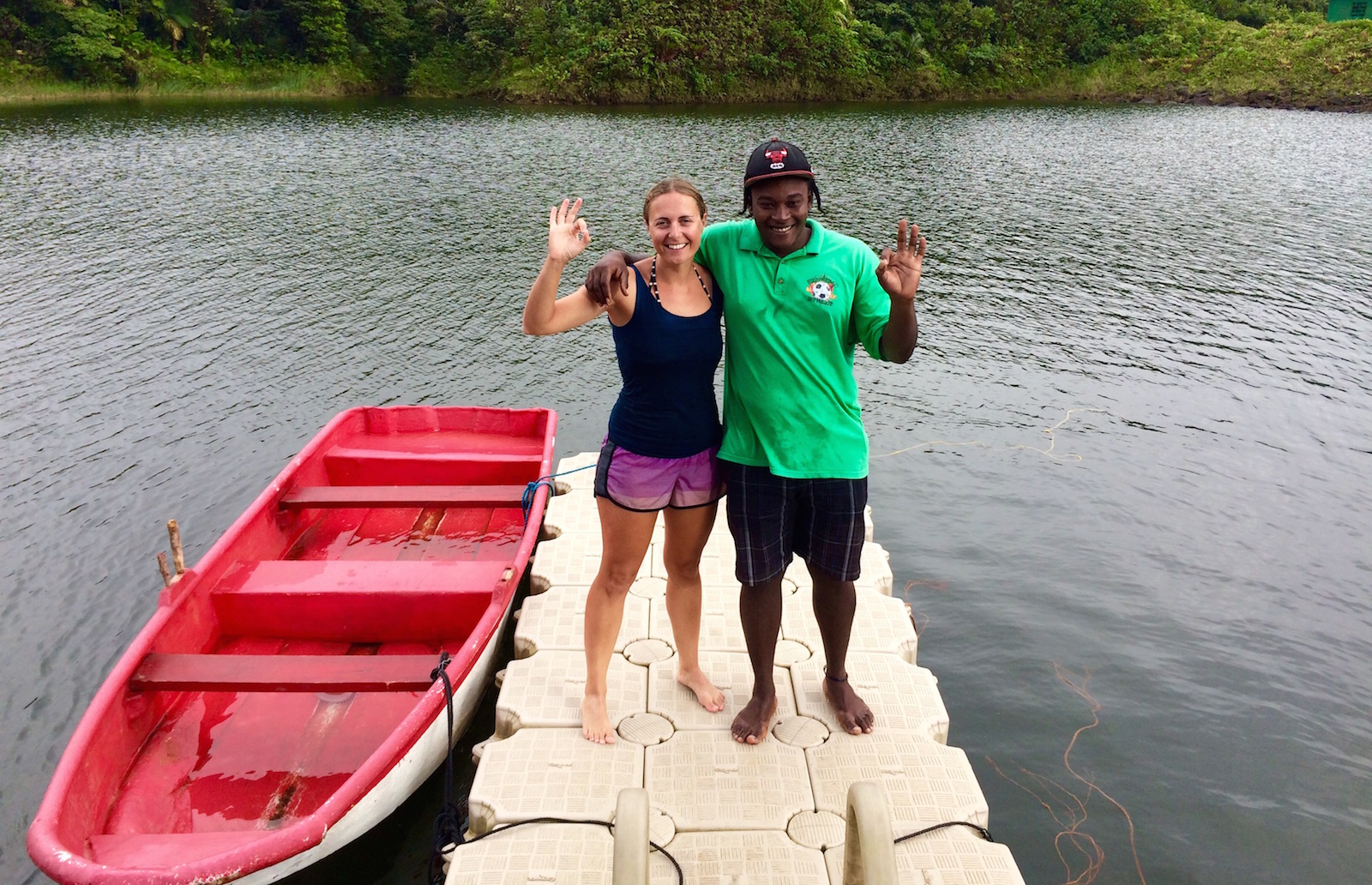 We went back to the boat for an hour to recover then headed out to a bar Beans told us about where we met him for some cold beers and food as the sun went down. What a day! 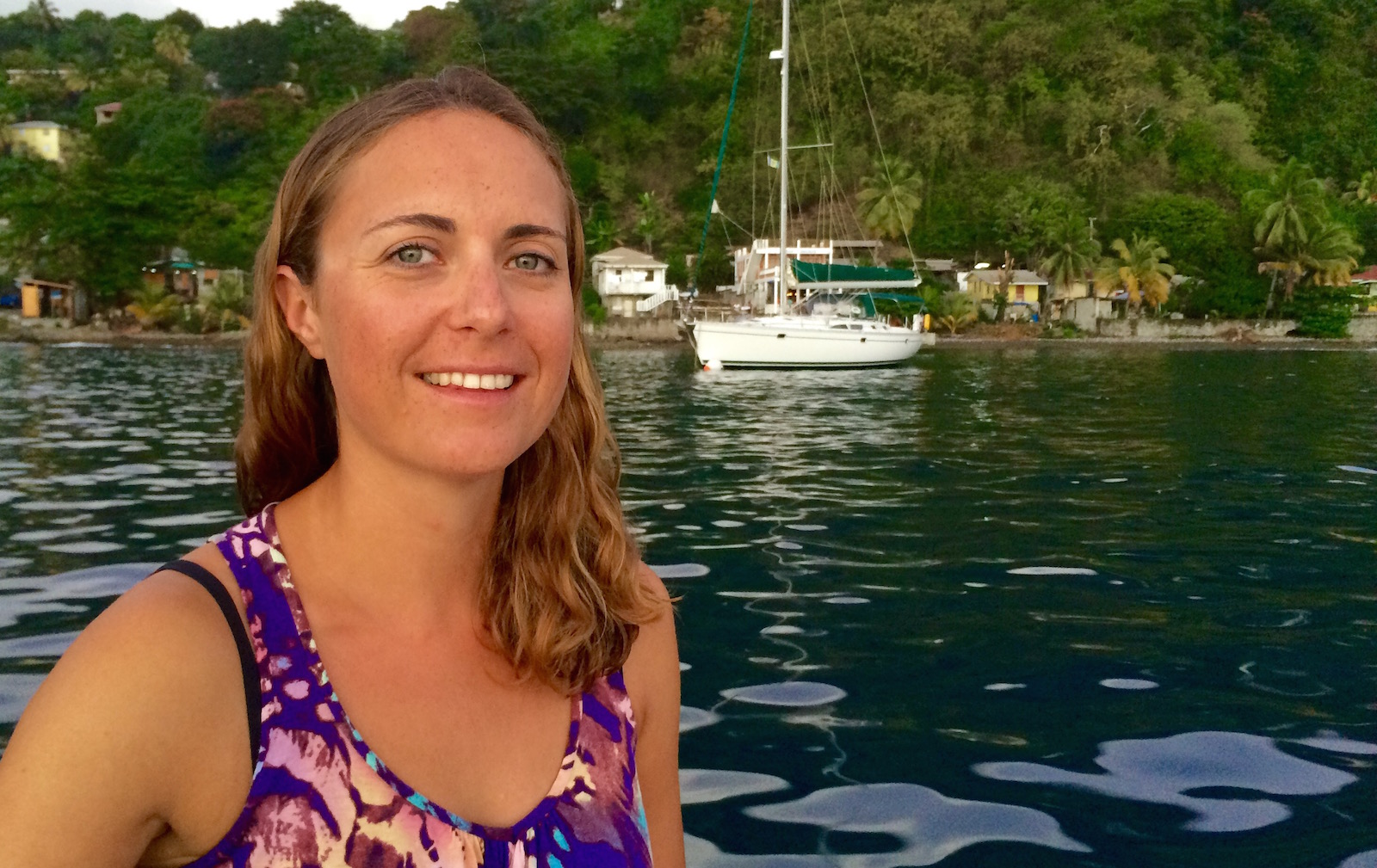 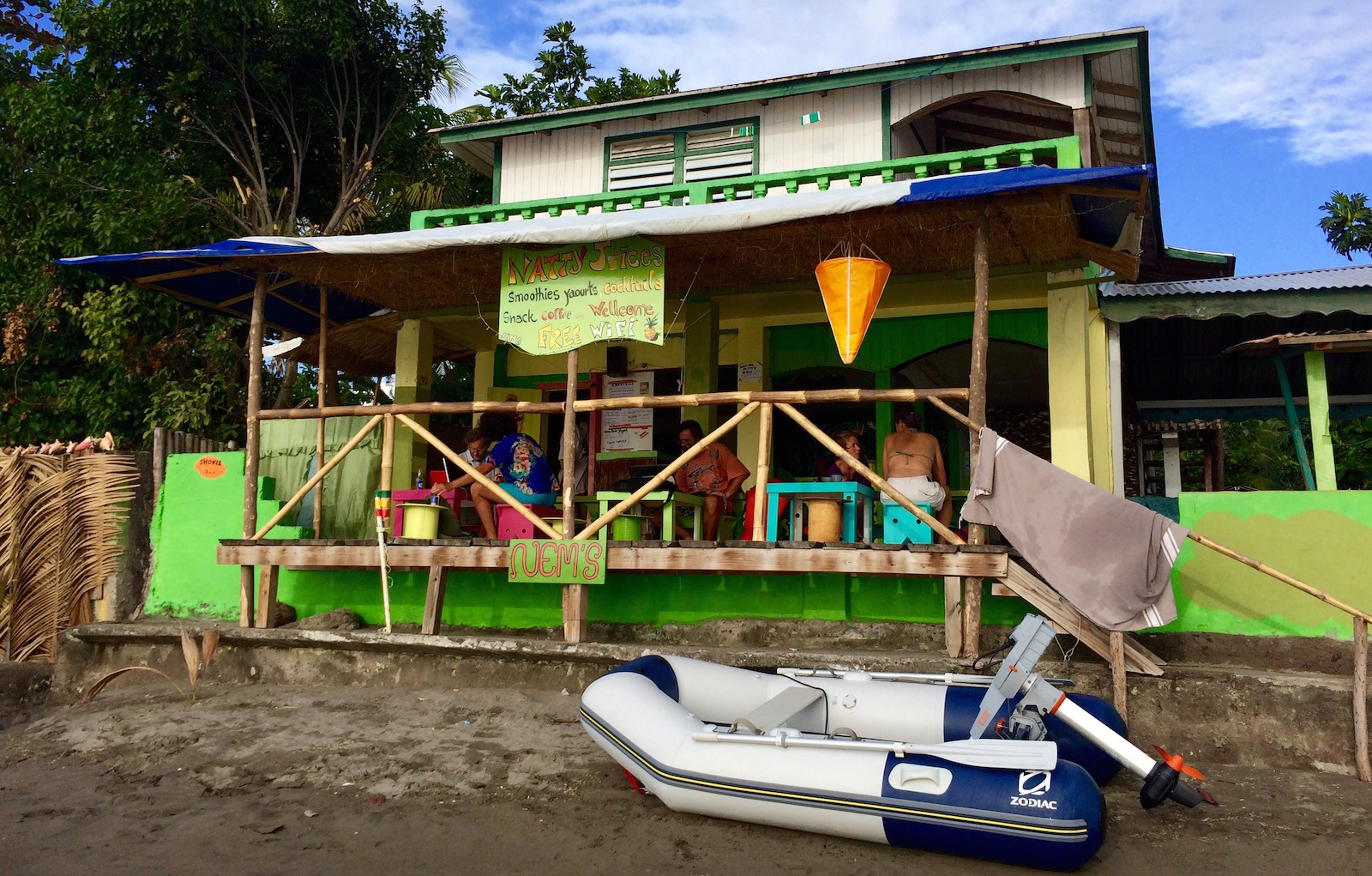 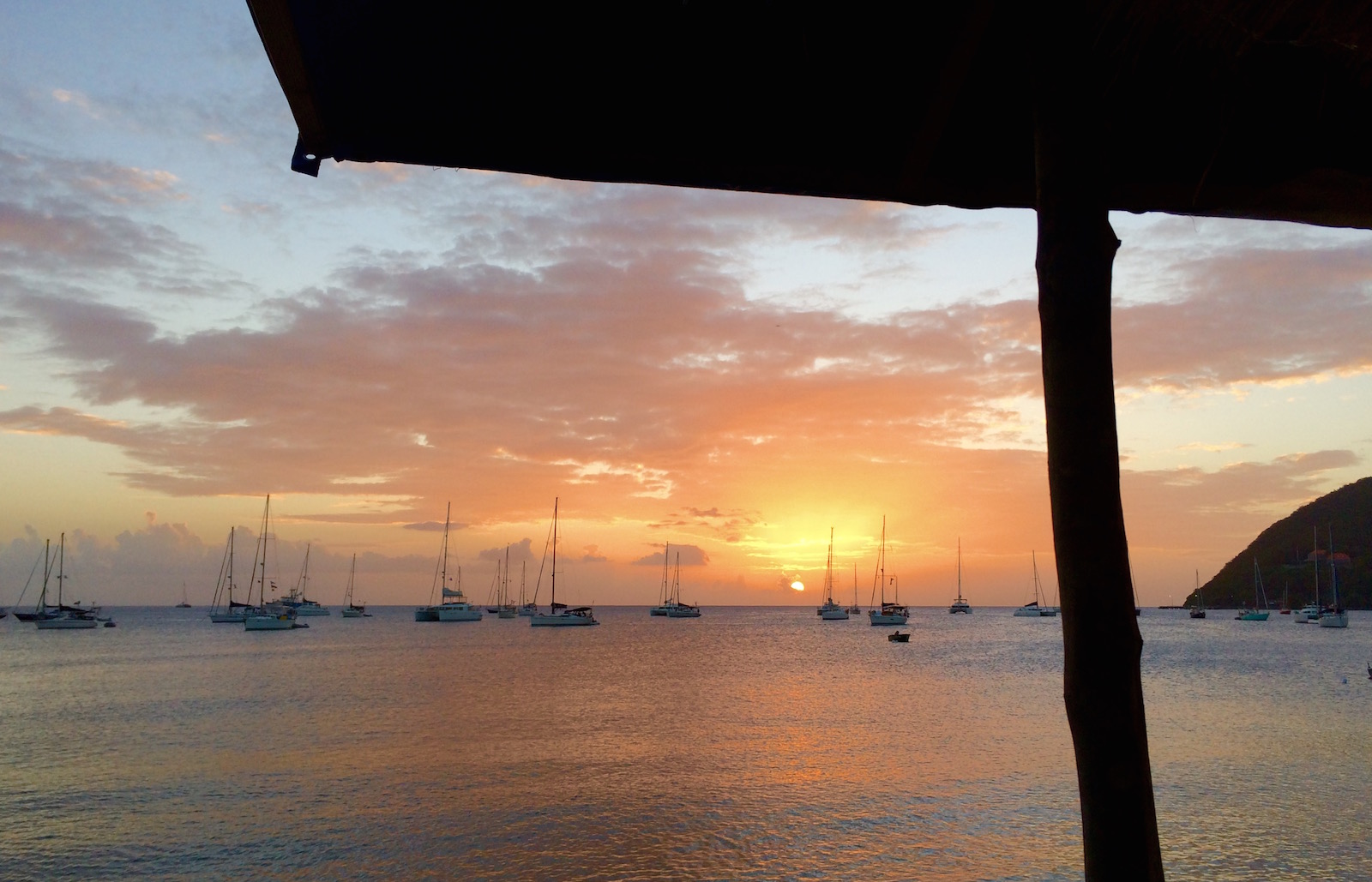 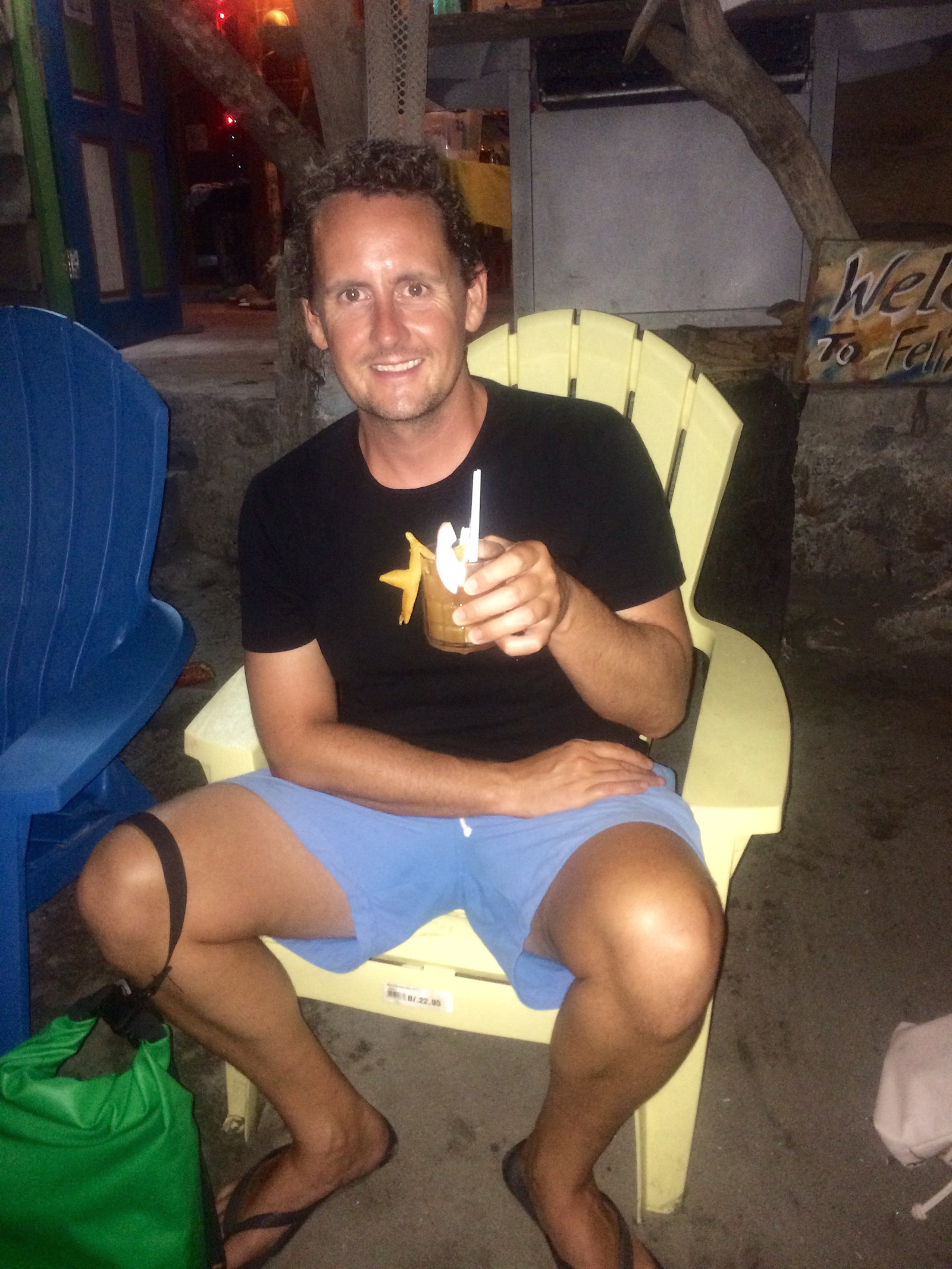 We sailed North the following morning to Portsmouth hoping to catch back up with 99 Bottles, Take Off, and Morning Haze. They were doing a tour the next day so we joined in with them taking a nice cruise down the Indian River which was a magical place used in a lot of the Pirates movies. 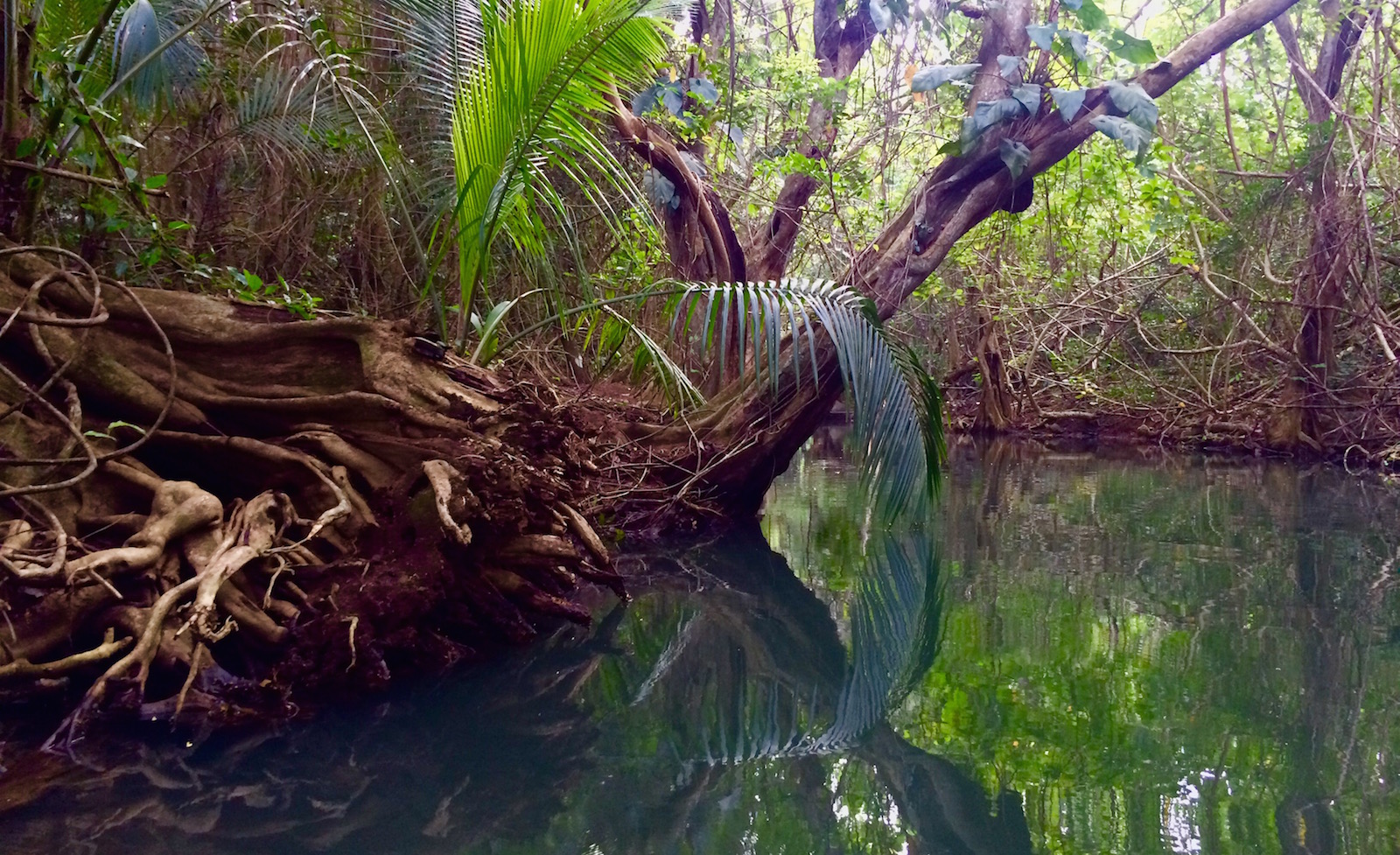 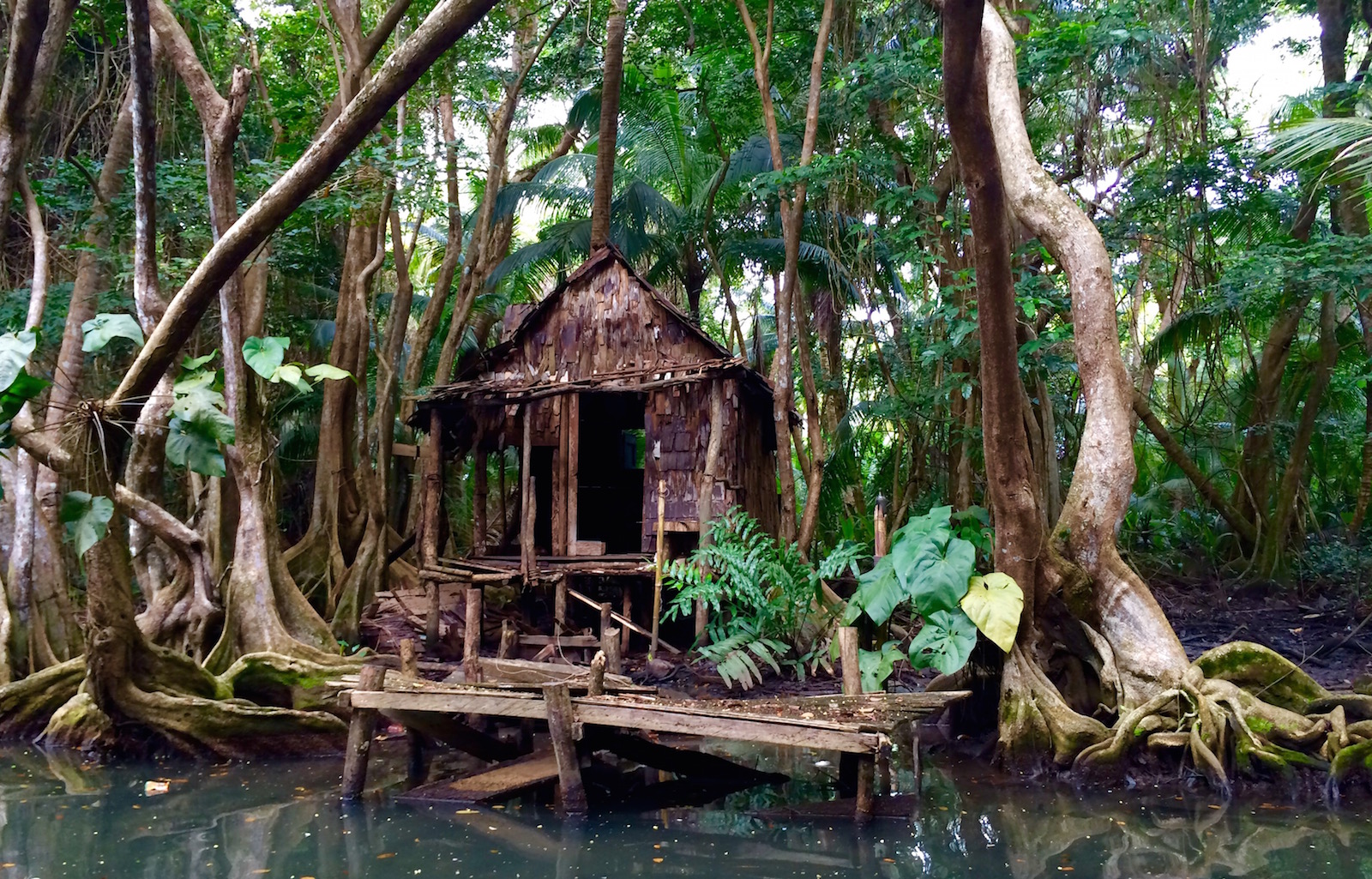 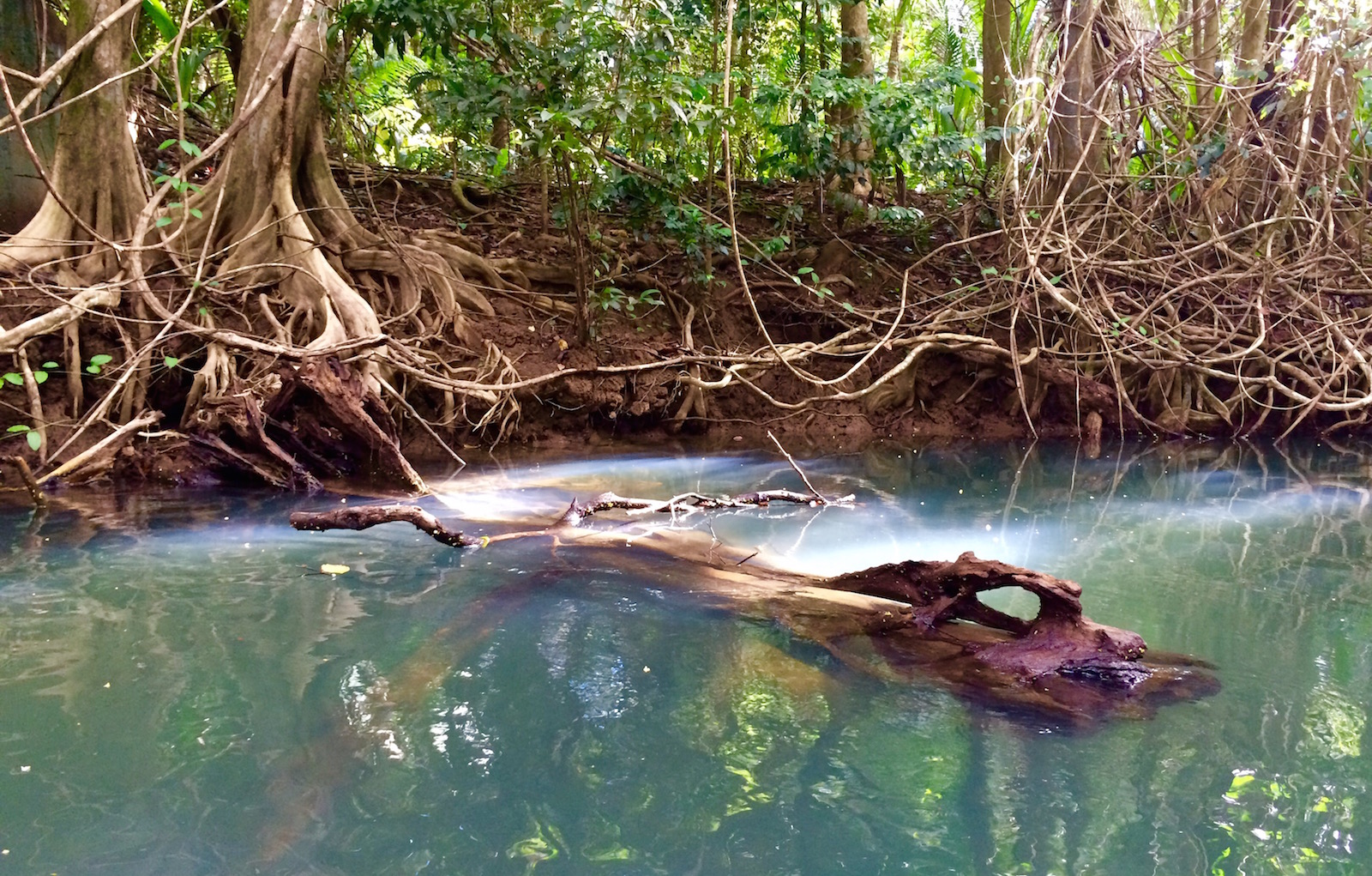 That evening we all got together to have a big beach BBQ which was great fun. We’re going to miss those guys as we need to keep pressing on. Not sure if we’ll cross paths with them again at the rate we’re going but I sure hope so!

Dominica was everything we’d hoped for and more. It’s like the contrast has been turned up on everything. Colours, food, the friendliness of the people. In many ways it reminded us of St. Vincent in terms of how it looks but the people are so much more friendly towards visitors. Yachts are very welcome here and the locals are trying to get organised so it avoids all the tension. They’ve come a long way from what we’ve seen. Even though the country is still very poor we’ve never felt safer and we’ll remember our few days on this amazing island as some of the best of our whole trip.