Helen and I were excited to be heading out on a long passage again.

At roughly 950 Miles the sail from Puerto Rico to the San Blas Islands just East of the Panama Canal, this would be our second biggest crossing after the Atlantic.

Since then we’ve tweaked the boat, and other areas such as our weather software, so it would be interesting to see how everything worked once off shore.

We set off a few days later than we’d have liked due to some postal issues. As is the norm with cruisers a very nice guy came to our aid so we left feeling safe that our waypoints into the tricky San Blas area (most of which is based on chart data over 100 years old) was as accurate as could be.

The only real issue was the wind might drop a little too much.

We said goodbye to Eileen and Geoff who were the lovely couple we met on the boat next to us and made it back out of the marina with little fuss. It’s hard to rate ‘The Yacht Club’ on Puero Rico’s East Coast. The staff, facilities, and berths were spot on but they do have a real issue with swell which drove everyone crazy.

No sooner had we cleared the marina than a large boobie landed on our Bimini. Now it’s not every day you can say that but unfortunately the boobie in question was a bird. He just hung out calm as you like while we took some photos. I even stroked his feet which felt like cabbage leaves. This fact made Helen laugh for some reason. I don’t think the boobie was impressed with my observation either as he flew off at this point to catch more fish. 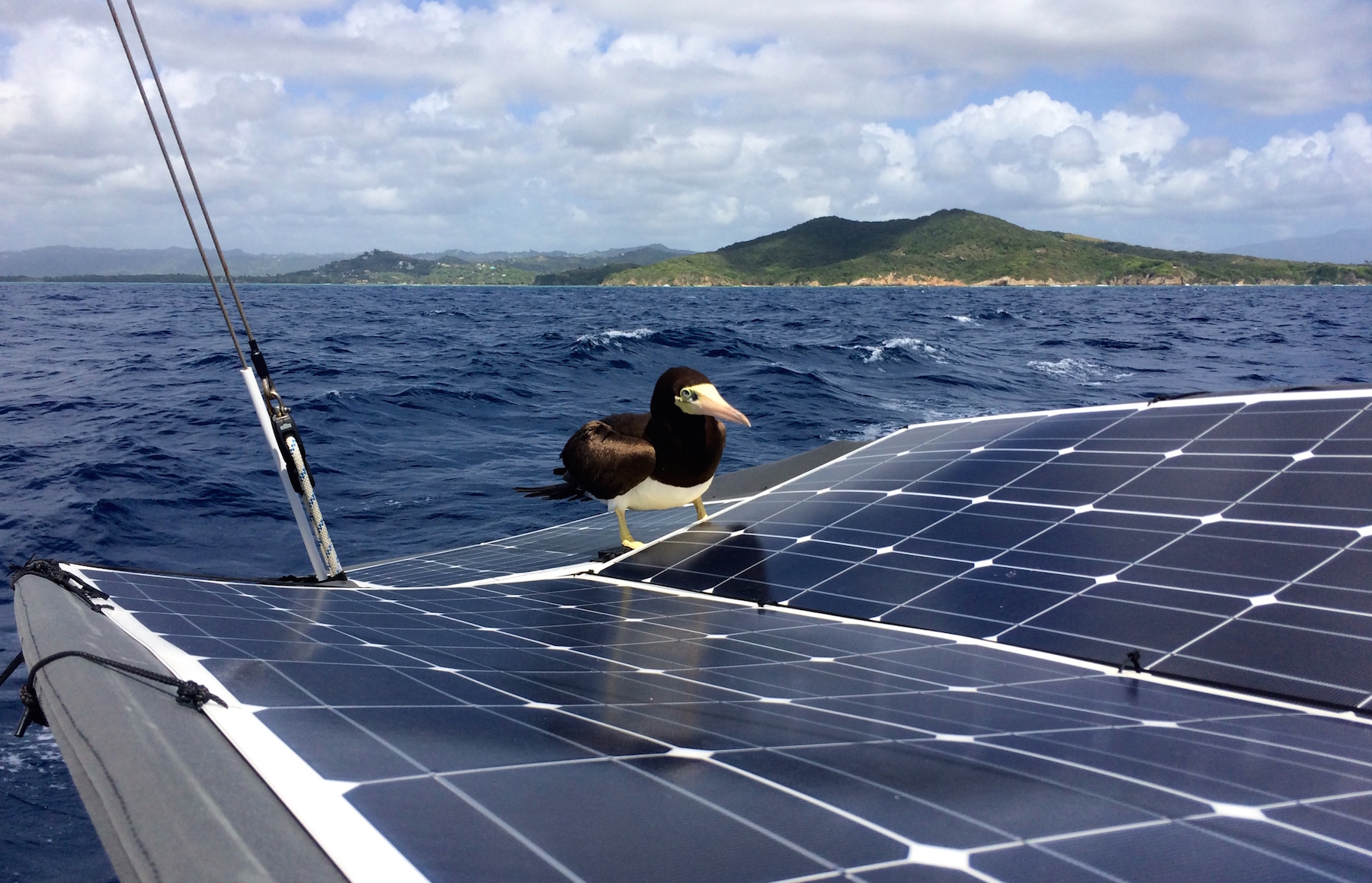 It was lovely sailing down Puerto Rico’s southern coast. This side of the island was lush greens, a huge contrast to the concrete industrial parks etched into the landscape everywhere when you travel by car.

We had a perfect days sailing with warm winds pushing us smoothly over flat seas. Nice. 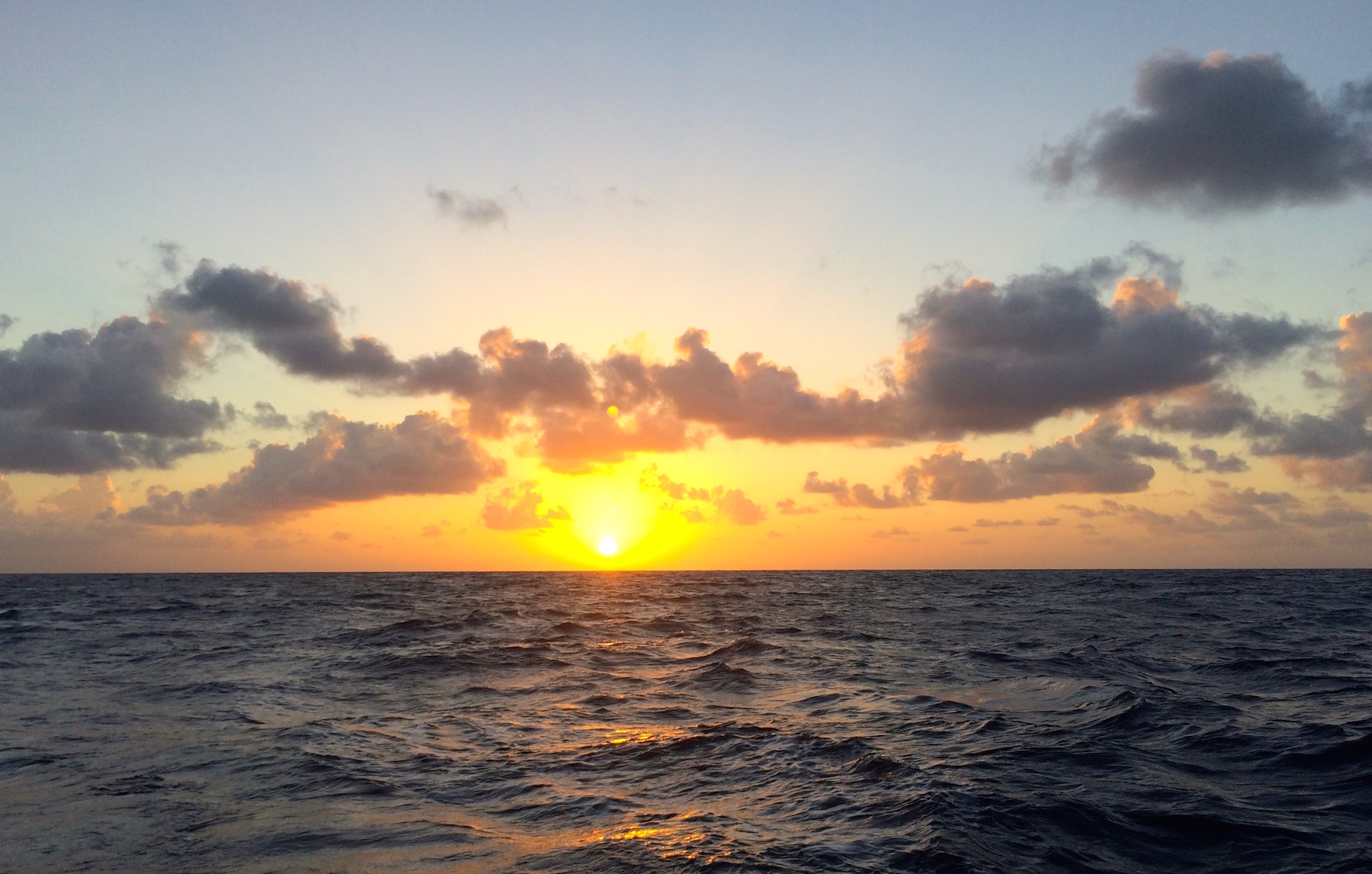 During the night the wind dropped as we feared and day two was spent fighting flogging sails. The seas were still flat and sun shining though so we couldn’t moan too much.

I mentioned our new weather software. After rave reviews from Cam and others I know who use it we’ve signed up for PredictWind. It’s not cheap but after doing some research the features it offered were exactly what we’ve been after.

Whilst on shore you can get detailed info, get the thing to work out what’s the best day to leave, etc.   but what we’re really loving is the weather routing and how that works offshore with our Iridium GO satphone.

You just enter your current location and end point and PredictWind looks at all the major forecasting models to create a route. You can tell it to provide the fastest route or make it more comfortable. So far it’s been scarily accurate for us and via the Iridium GO we can download a small text file version of the the data in seconds, rather than wait 5mins for a GRIB, which the app then converts into graphs and easy to read charts.

You can even export its route and import it onto your plotter. Based on the conditions it creates waypoints to head for. Sure enough the actual route we ended up taking, due to wind angle most of the time, matched up to the predict wind forecast perfectly.

So far we are very impressed.

The next few days were some of the best sailing we’ve had on the whole trip. Sunny days, 14-18 knot winds behind us, and flat seas. It’s exactly the conditions we had expected during the Atlantic crossing but never got. Tradewinds at their best!

We didn’t see a soul for two days. Just open water by day stretching out before you in every direction and a stunning dome of stars showing off by night. Those moments of looking outwards or upwards will be one of the biggest things I’ll miss after this trip ends.

We weren’t always alone though. One afternoon we crossed paths with the largest pod of dolphins we’ve ever seen. It was like they hadn’t seen anyone for days either so raced over to us excitedly shooting out of the waves as they approached from the side in a huge arc. There must have been over 100 and the water was thick with them all diving and spinning around us. For 30mins our boat was totally surrounded by dolphins as they took it in turns to play in our wash.

By night we were treated to perfectly clear skies above while below huge jellyfish protested being run over as they lit up creating cool glowing orbs in the water just behind our stern.

For some reason this crossing I’ve had the sunrise watches and have been trying to find new and innovative ways to wake Helen up. First up, I was cleaning the decks and ‘accidentally’ threw a bucket of water through the window onto Helen as she slept. Could have sworn it was shut. Helen wasn’t exactly impressed. The next day a flying fish landed on the decks and I spent 5 mins trying to free it. Not impressed with that either!!

The other visitor that kept making an (unwelcomed) appearance was the same seaweed we ran into crossing the Atlantic.

I know this stuff produces more oxygen than anything else on Earth so I should give it a break but when you have wade through huge fields of the stuff it gets wrapped around your keel and rudder slowing you down to a crawl. I know. First world problems. The only way to get rid of the stuff was to crash tack into the wind then spin the boat back downwind a few times hoping it would fall away. That or dive under the boat and free it by hand. As I took the last turn to do that mid Atlantic in 4000m of water, Helen decided to stick to the crash tack method. Clever girl.

We’d been warned by many people that the Columbian coastline is prone to some of the worst conditions on the planet. We did an update on PredictWind which showed the winds and swell would be picking up so tried to stay a good 50 miles offshore as we came towards land. Even that far out the seas got very confused and we spent the day getting tossed this way and that.

I’d hate to try and tackle this area in bad weather.

During our last day the wind really dropped. Wasn’t an issue through as we only had a few miles to go and couldn’t get there that day anyhow. As the sun set one last time before landfall another pod of dolphins joined us. One of these was amazing. He kept speed with the boat and then shot out of the water in front of us doing crazy spins and summer salts. Over and over he did this. I think he was a Sea World escapee. We named him ‘Nutter’.

That night I was woken to the sound of Helen screaming. I flew up on deck half asleep thinking we were sinking or being attacked by a Johnny Depp wannabe only to find a flying fish had landed in Helen’s lap.  We got the fish back in the water and cracked up laughing as the adrenalin started to wane.

As the sun rose Panama loomed before us in the distance preceded by a splattering of tiny islands called the San Blas Islands. We’d made it. 980 miles in just under seven days. Seven of the best days at sea we’ve had. 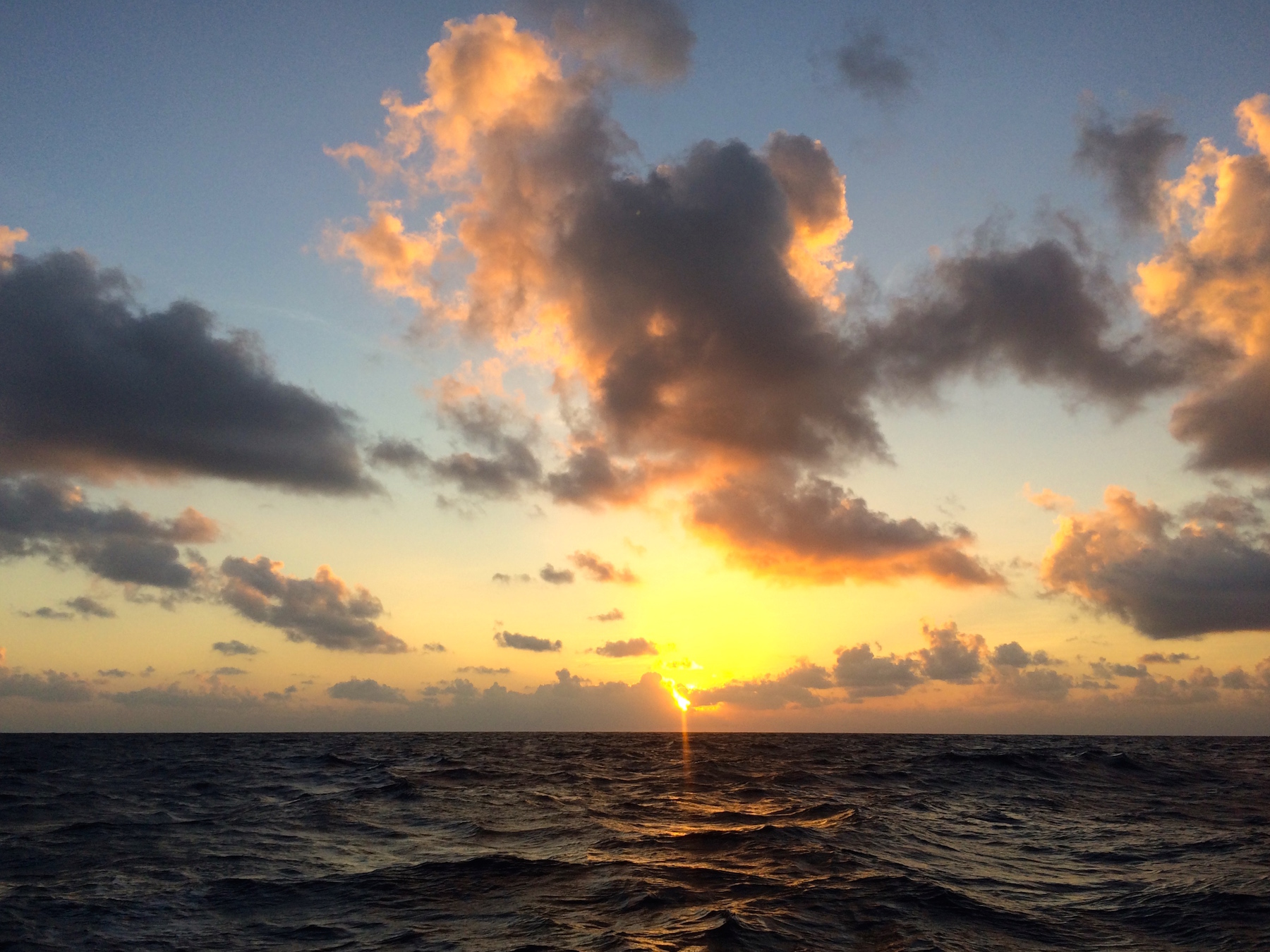 Hopefully all our crossings back to Sydney will follow suit.