After a lovely few days in the Spanish Virgins we caught a break in the weather and snuck over to Puerto Rico. It was only 20 miles or so over to the East Coast where we called ‘The Yacht Club Marina’ at Palmas Del Mer our home for the next six days.

We had a few reasons why we wanted to stay put in one place. For one thing after almost four weeks at anchor we deserved a bit of marina time but mostly it was due to the great provisioning close by and it was also a great jumping off point to explore the island.

Coming into the Marina was a test as there was a huge swell outside the breakwater causing all kinds of dangerous waves to smash about in the narrow channel. We had to push hard to keep Interlude lined up and pretty much surfed into the marina on one such wave. Might have looked quite impressive but it didn’t feel like fun at the time.

Once inside it was more protected. The marina is pretty huge, and very empty. It’s been designed for huge super-yachts but it doesn’t feel like all systems are go yet. I think for next season they’ll really push it but we didn’t mind the space and high end facilities! I mean where else have we had a pool looking out over the ocean to ourselves in a Marina?! The staff were also very helpful, I get the feeling they get a little bored here they all love to help out in any way they can.

After we tied up we noticed the swell outside was large enough to cause quite a bit of rock ’n’ roll inside. Ugh. Oh well. Apart from that the place was gold, you can’t have everything.

Looking at the weather there wasn’t really a good window down to Panama for the next 5-6 days so we used the time to explore the island (renting a car here and there), provisioning like crazy, and stocking up on any boat parts we may (or may not) need.

We’re becoming more and more aware that shortly we’re going be in heading out into the big old Pacific ocean where supplies and parts will become harder to get. A lot of boats get caught out by this and end up paying extortionate prices for below par goods just because there’s no other option. Puerto Rico has all the major US stores so a few trips to Walmart has stocked us up for at least a large part of our trip back to Oz. Looking at the waterline, and lack of funds in our accounts, I personally think we’ve got enough for two or three circumnavigations.

However amazing Walmart was (it wasn’t) we also wanted to see the island. Public transport, which we normally use if we can’t walk, is non-existent here so we rented a car for a few days.

A trip to San Juan was a must. It’s the most visited place in the Caribbean, although I’m sure the Soggy Dollar Bar in the BVI’s must run a close second. When we arrived there were five huge cruise ships in port and the place was flooded with tourists all exploring the same two or three pre designated ‘safe’ areas. 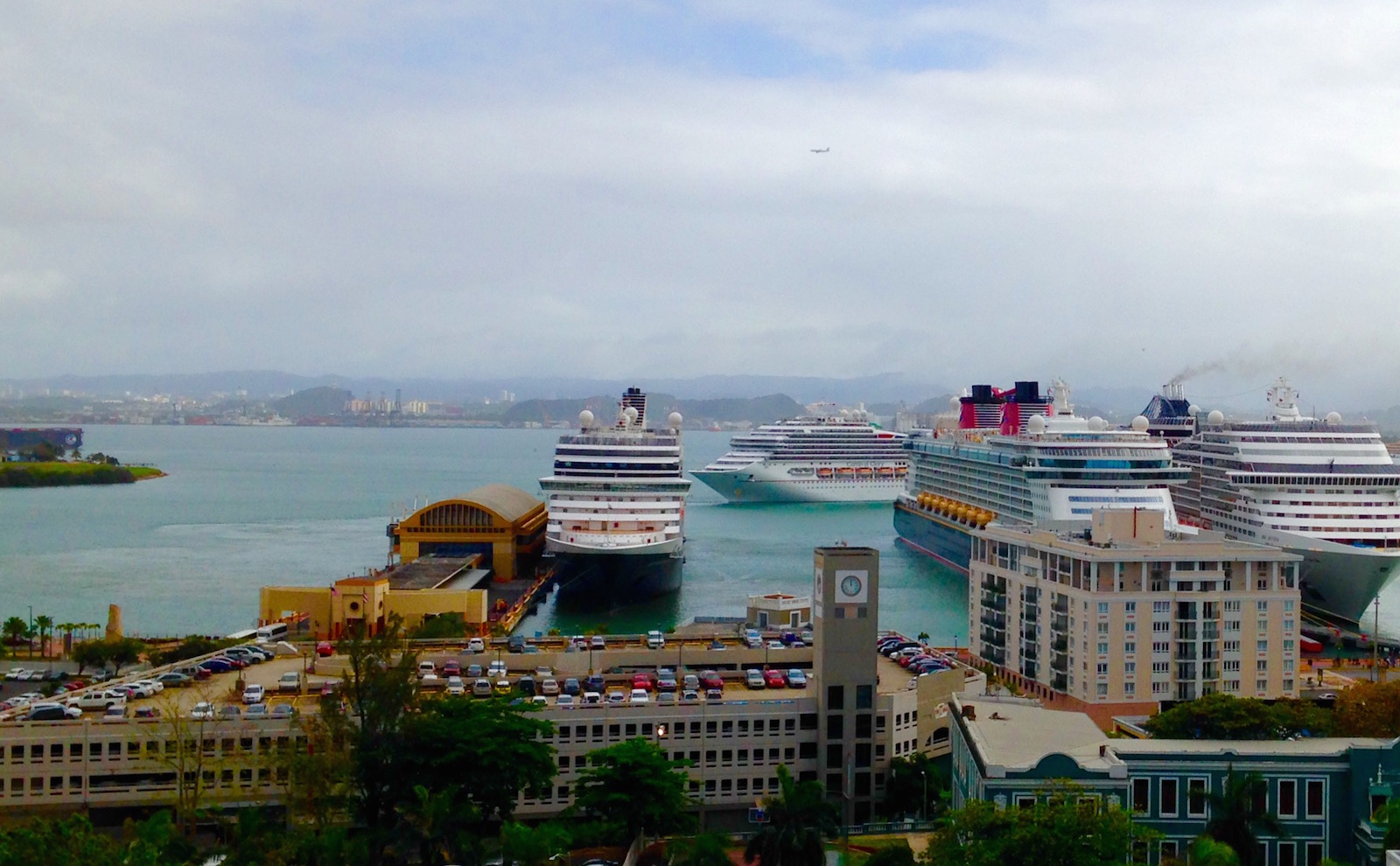 This idea of ‘safety’ is a real eye opener to us. Must be a US thing, but the marina we stayed in was within a gated community with armed security guards everywhere. Go to a nice town like Old San Juan and there’s a policeman with gun and bulletproof vest on EVERY corner. Humm. I understand it’s done to make people feel ‘safe’ but I’m not exactly sure what everyone’s so afraid of?

I’m sure Puerto Rico has its fair share of problems, like most areas in the Caribbean, but I’m not sure building walls to hide within is the answer, maybe I’m just being very naive. Helen and I just acted how we do everywhere we go. Try and use common sense, be respectful of the place you’re in, and don’t act like a muppet. San Juan, once you’re out of the tourist military zone, is a lovely place. We walked all over, and found the back streets off the beaten track to be stunning. The people we met were are extremely friendly but you have to play by their rules to see this. We learn’t that it’s extremely rude to just get straight to the point when talking with a Puerto Rican person. If you want to engage you have to take the time to talk and laugh… I think we’ve opened up to this naturally anyhow during this trip but you really notice how people can shut down if someone just barks an order at them in a restaurant for example.

Old San Juan also had some amazing castles and forts where you really get a feel of the quite tragic history the town has had. It’s amazing to think that so many European powers, and then the US have all taken turns of invading, fighting, burning and rebuilding the place.

The San Cristobal Castle, which is the main attraction in town, is stunning to walk around. The cloudy skies didn’t make for great photos but you get the idea. 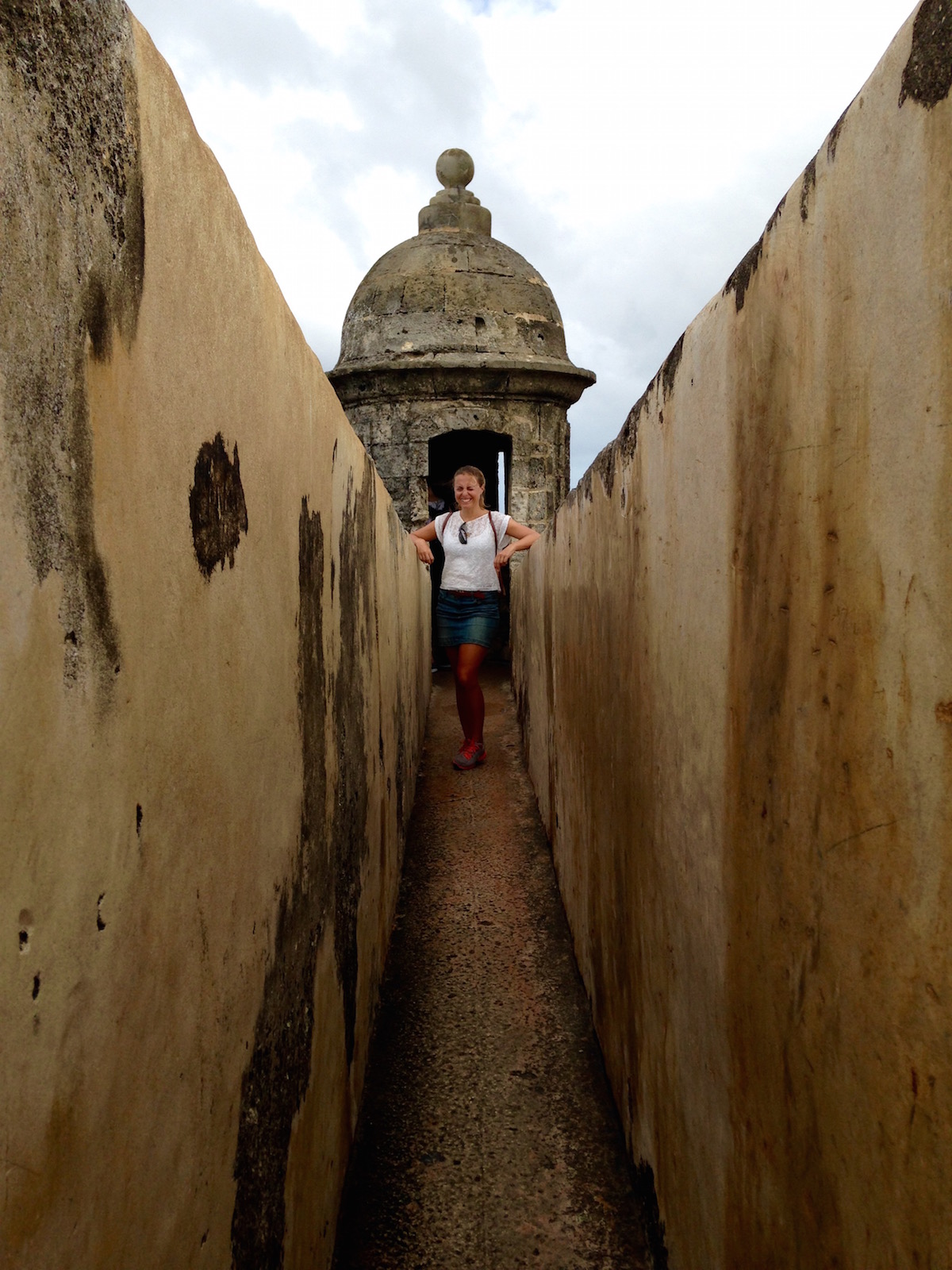 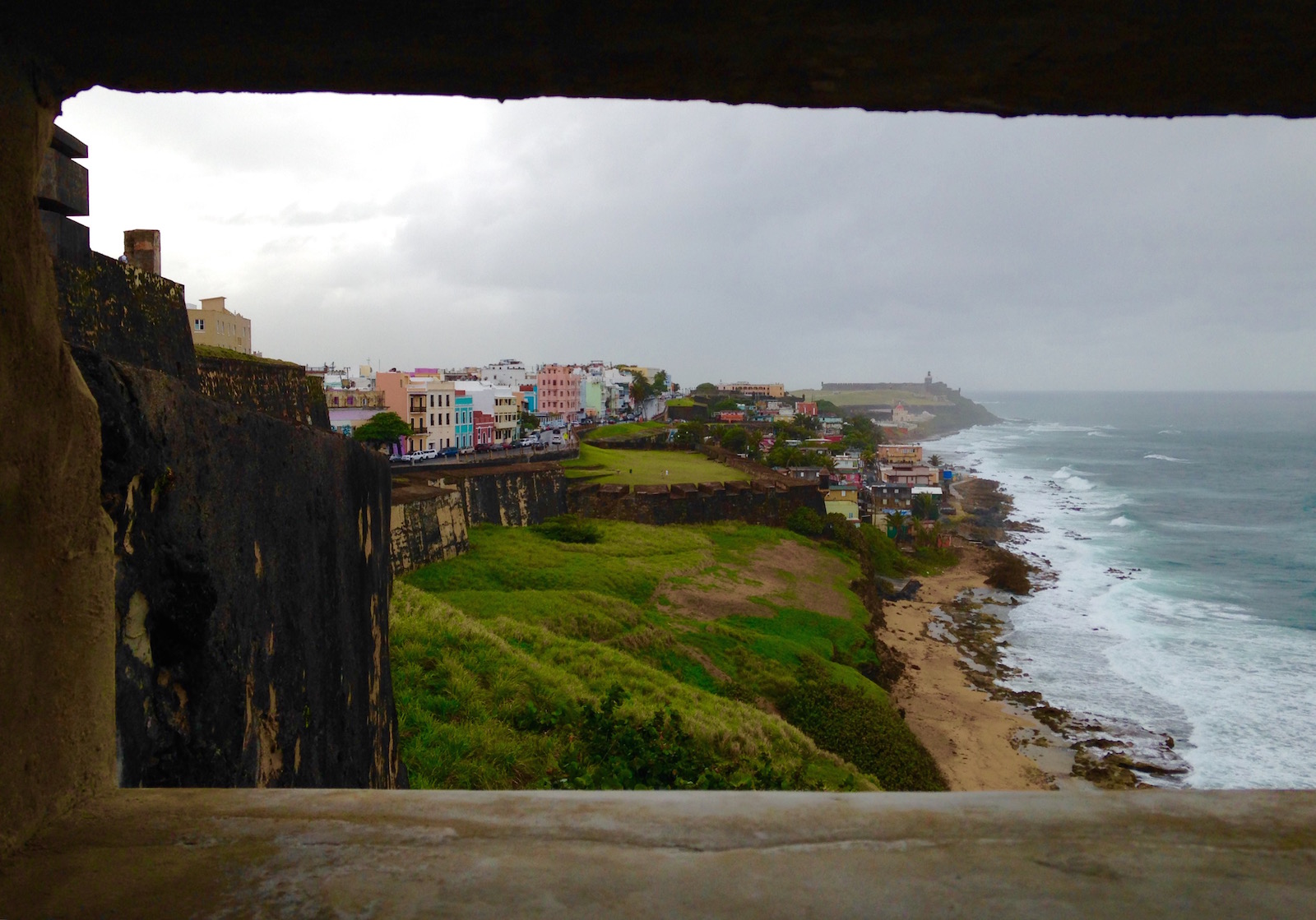 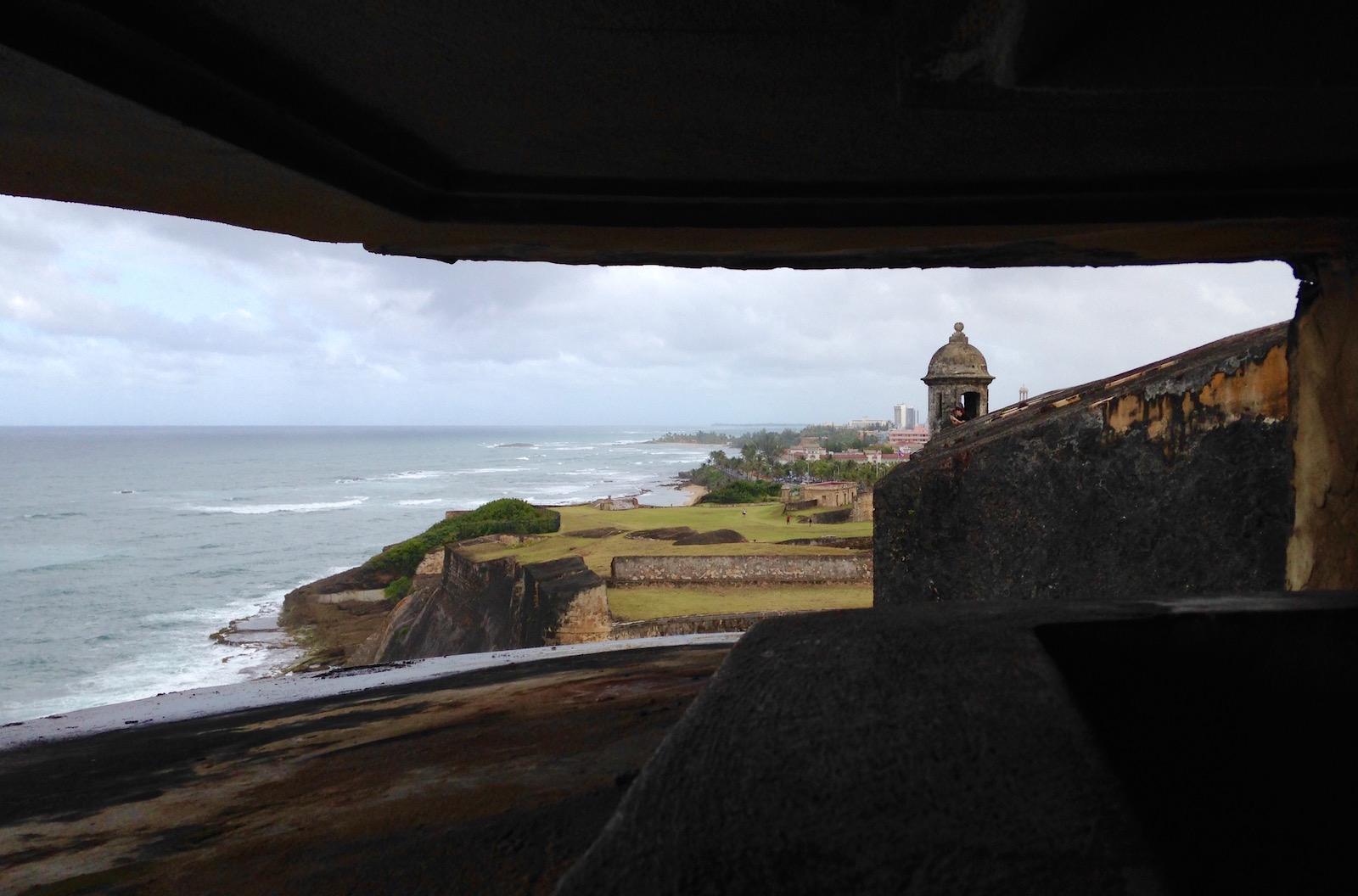 You can see where different occupiers have added to the fortifications as it’s importance grew. This continued right up until the second world war, so 450 year old original walls are merged with concrete machine gun placements. 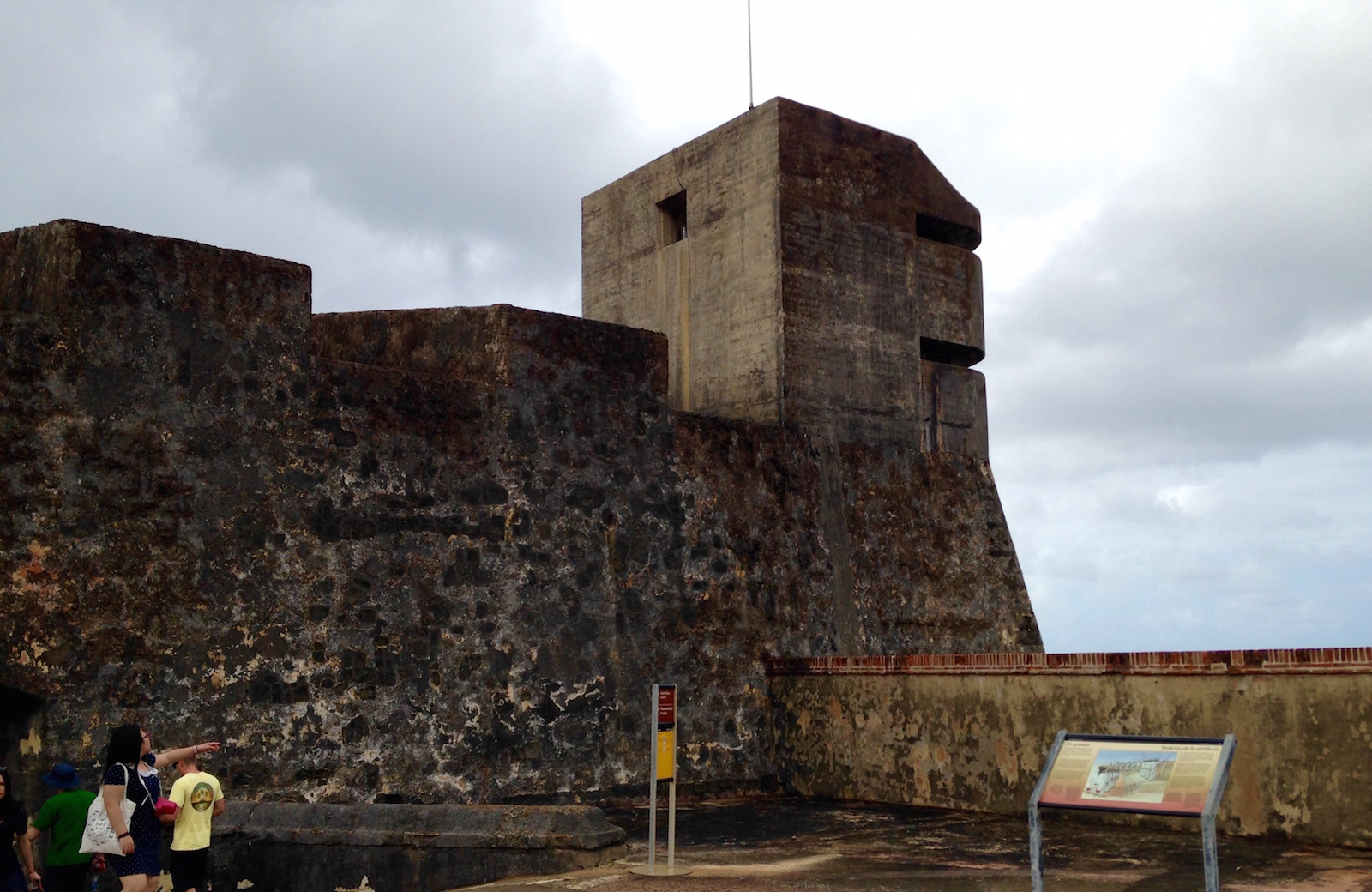 The way the history is presented is very well done and we spent a good few hours soaking it all in. 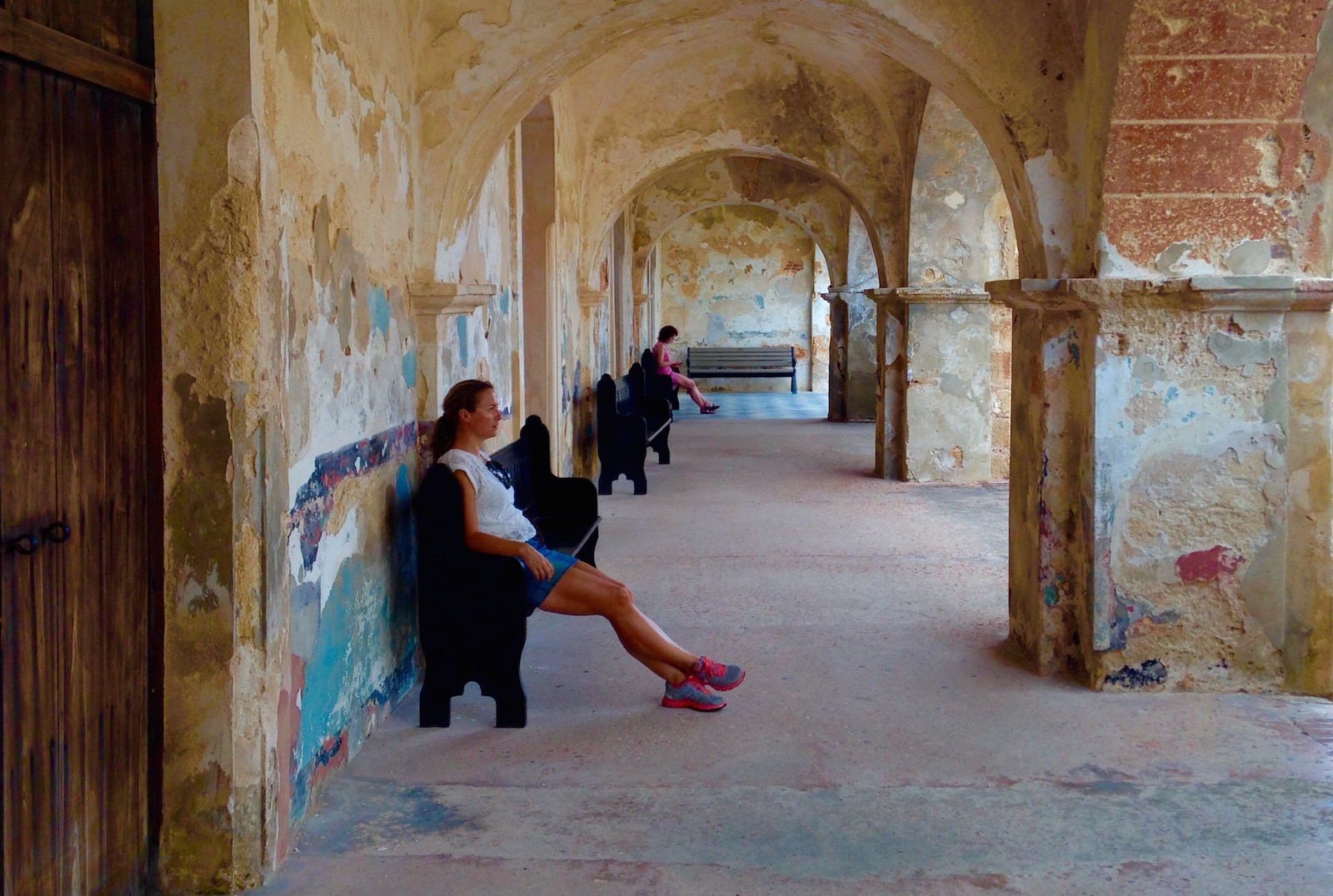 After the castle we wandered aimlessly around, our number one way to explore. We really loved the feel of Old San Juan. It’s an extremely well-kept place and has a very active arts scene. Again it’s a shame a lot of the cruise boats never get to see these sides of places, preferring it seems to focus more on duty free shopping. Some of the best areas were pretty deserted apart from a few wanderers such as ourselves and locals chilling out. 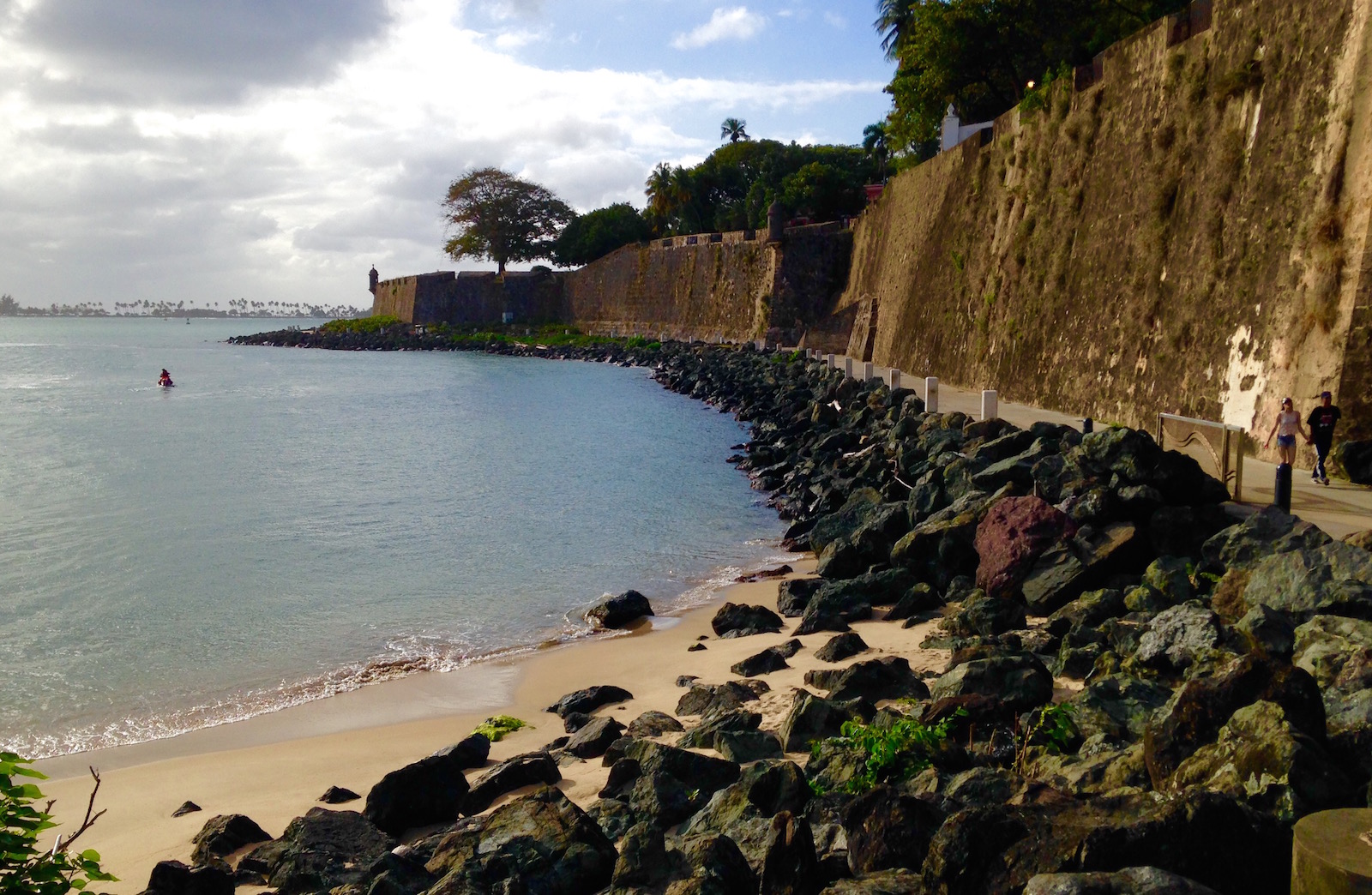 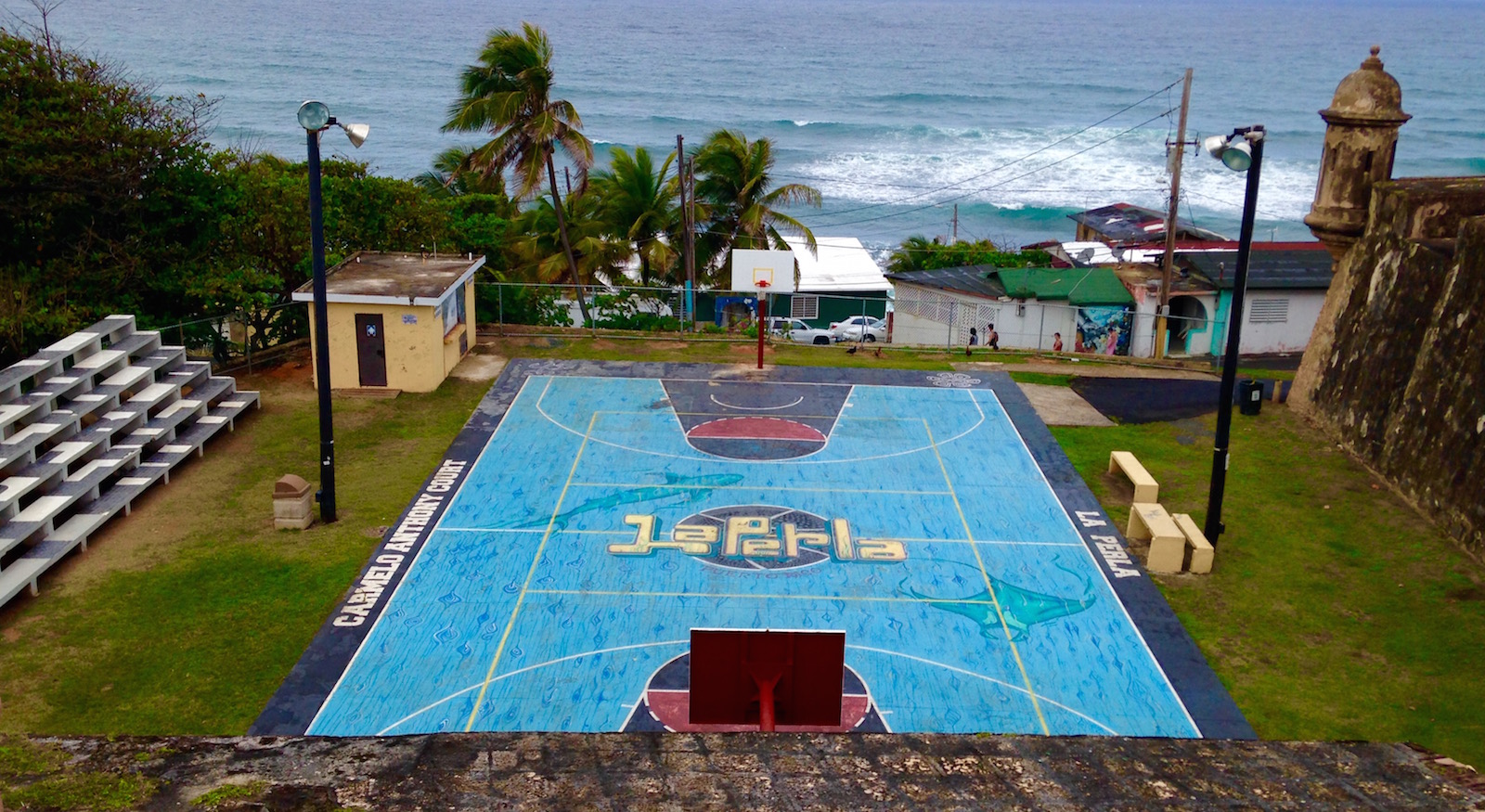 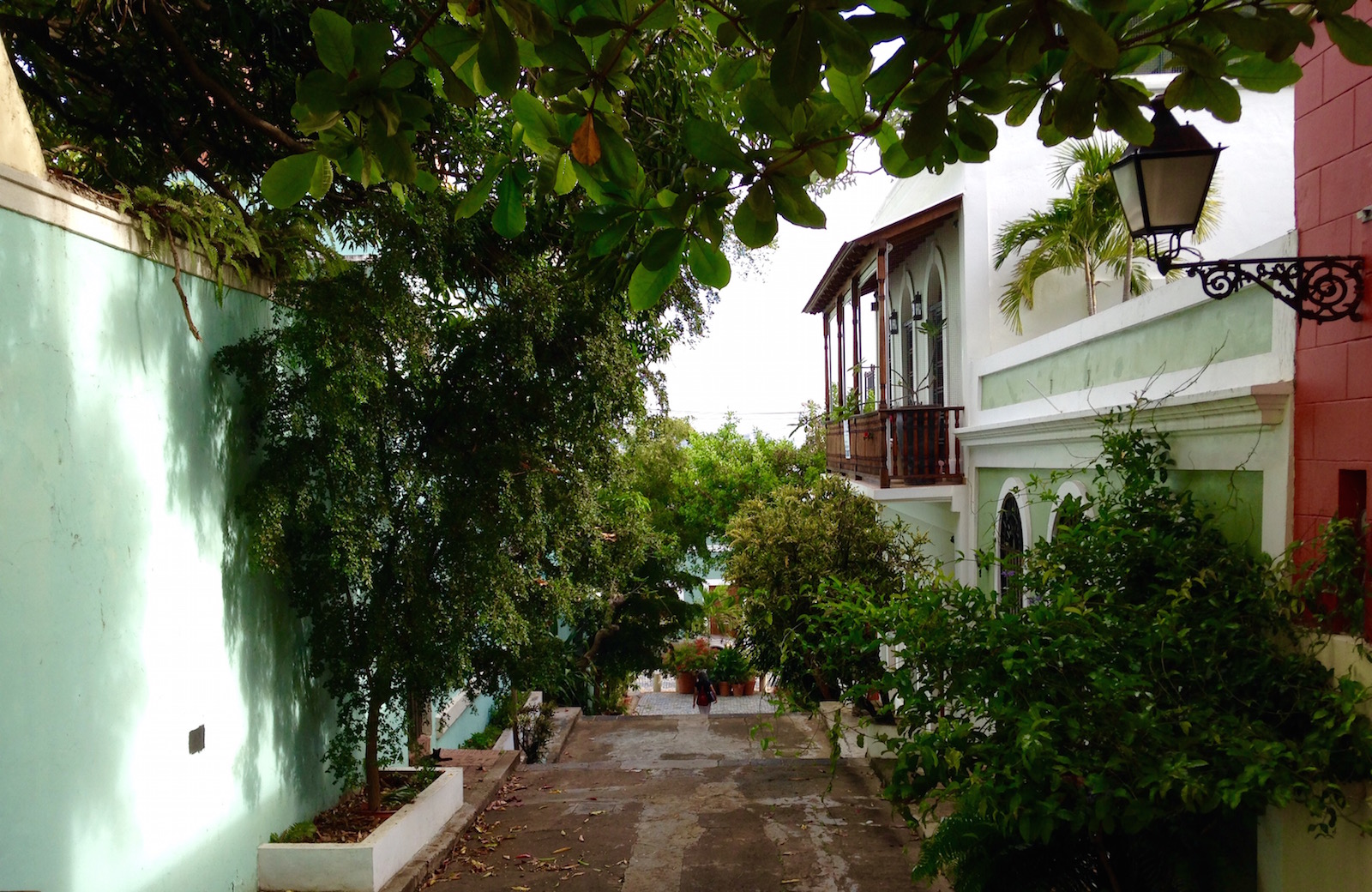 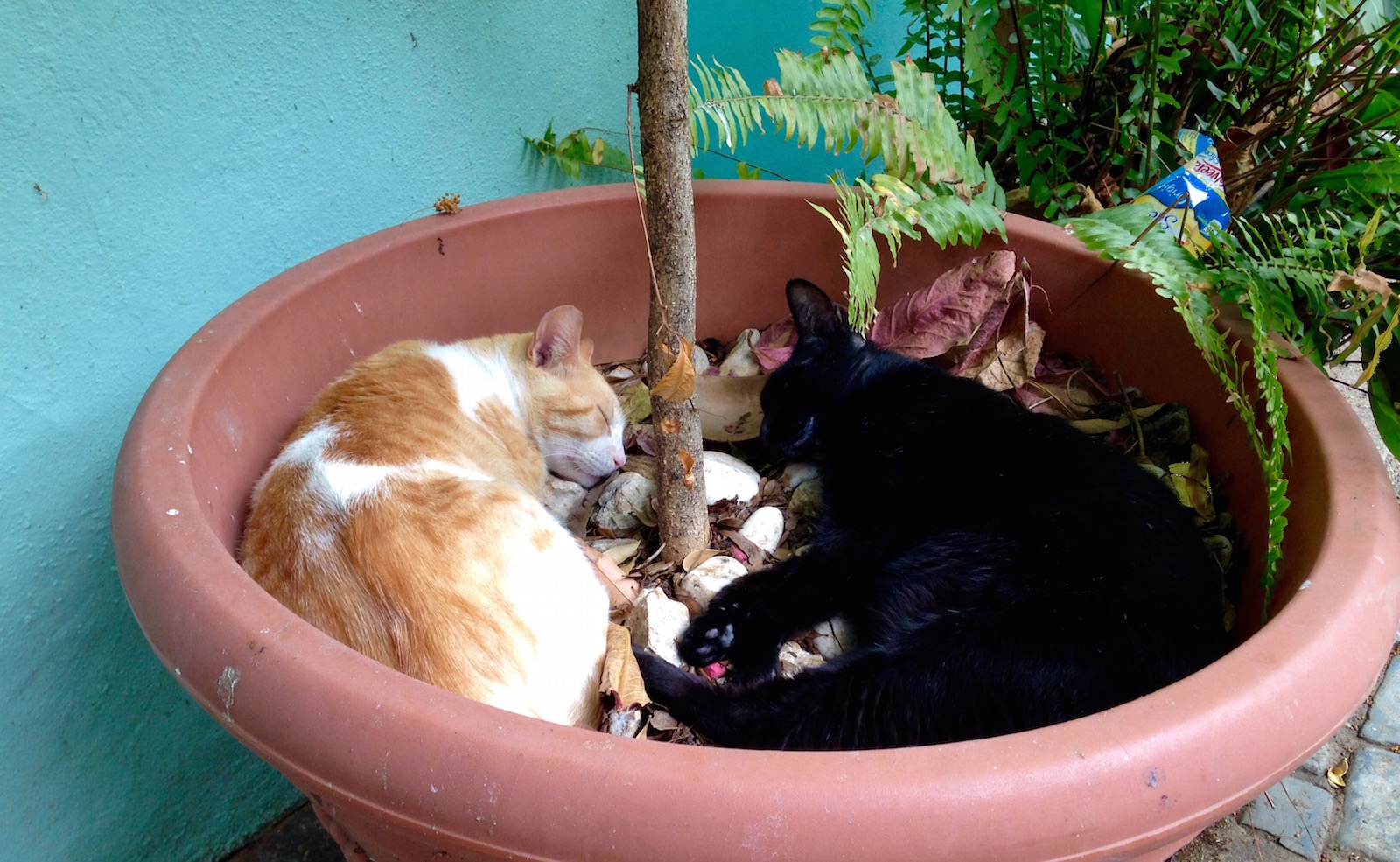 After an exhilarating drive back in the dark through thunderstorms and some of the craziest driving I’ve ever seen we crashed out.

The next few days were spent buying yet more provisions, swimming in the pool, and chatting with a lovely couple on the boat next to us who were also trapped here trying to head over to the BVI’s.

Time passed so quickly that it was soon time to clear out of the country. I was dreading this after the dance we had getting into the US but we walked into customs, spoke with two lovely officials, and ten minutes later walked out with our papers ready for Panama.

We just had time enough to chill out on the lovely beach here before heading back to the boat to get her ready for heading back out to sea. 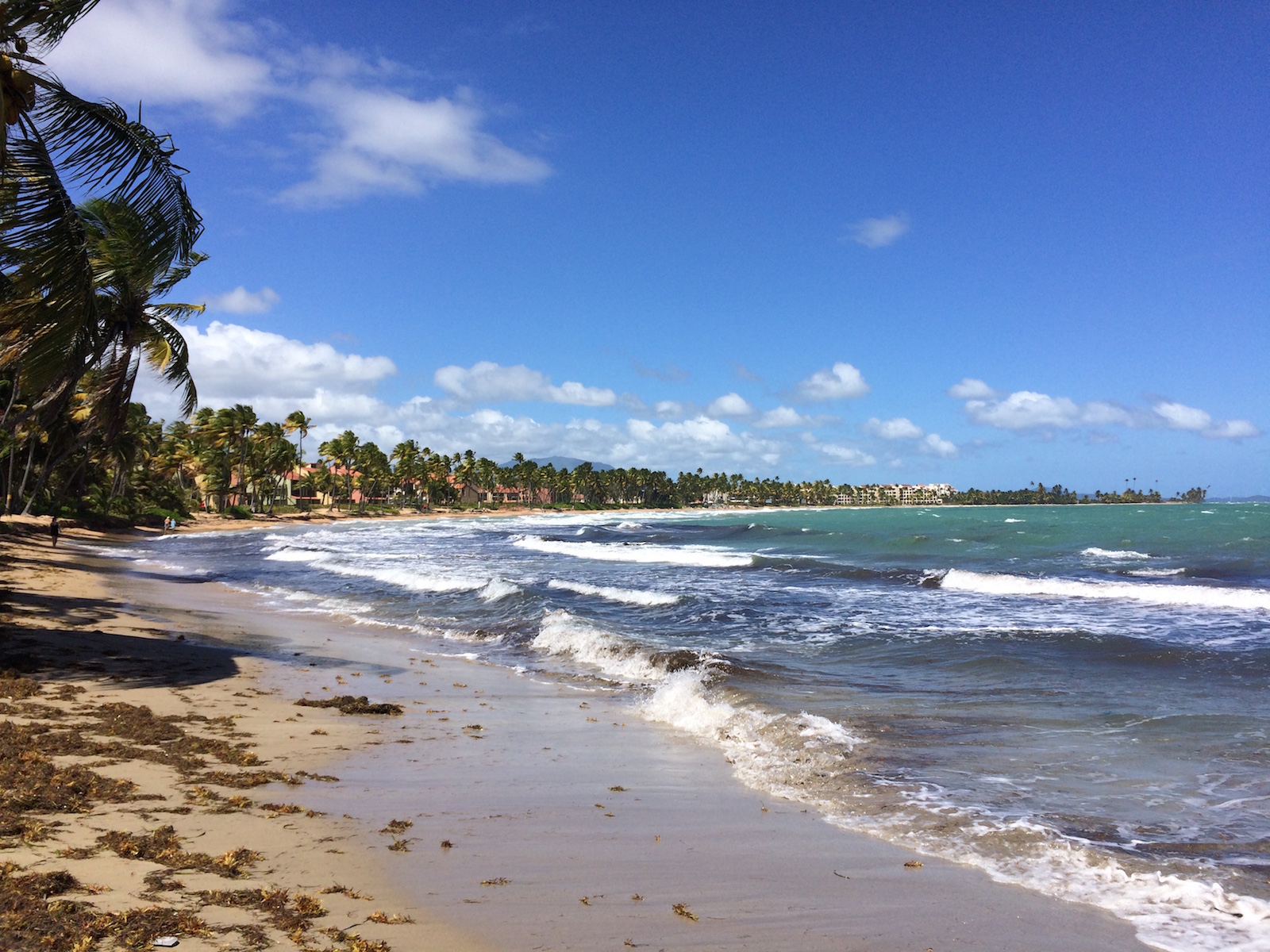 Tomorrow we set off the the 950 mile Southwest passage down to the San Blas islands in Panama. The forecast looks good! After 6m waves last week we’re now looking at a nice 1.5m most of the way over. The waters just off the Colombian coast line can be very changeable through so we’ll keep a close eye on that as we get closer.