Everyone seems to be a Saint here. Must be a very holy area or something?

We couldn’t really find much info on this small island apart from there being a nice beach complete with good bar called Shipwreck, and to stay away from the main town as it’s a bit of a dump. Fine, beach bar it is. Well, so we thought…

There has been a bit of weird weather flying around the area. Mostly everything comes from the East. Everything’s set up for this, so all the good anchorages, beaches, etc, are on the Western side of the islands. When the swell comes from the North. Ouchy! Everything rock and rolls.

This is exactly what we found coming into Saint Kitts.

We got to the beach and anchored. The wind and swell was so bad it felt like trying to walk home after a long night out so we had to move. We tried another spot that we saw on the way in and anchored there. Much better!

The weather luckily calmed down a little and we spent Valentine’s night on board looking out over the water. Was lovely. 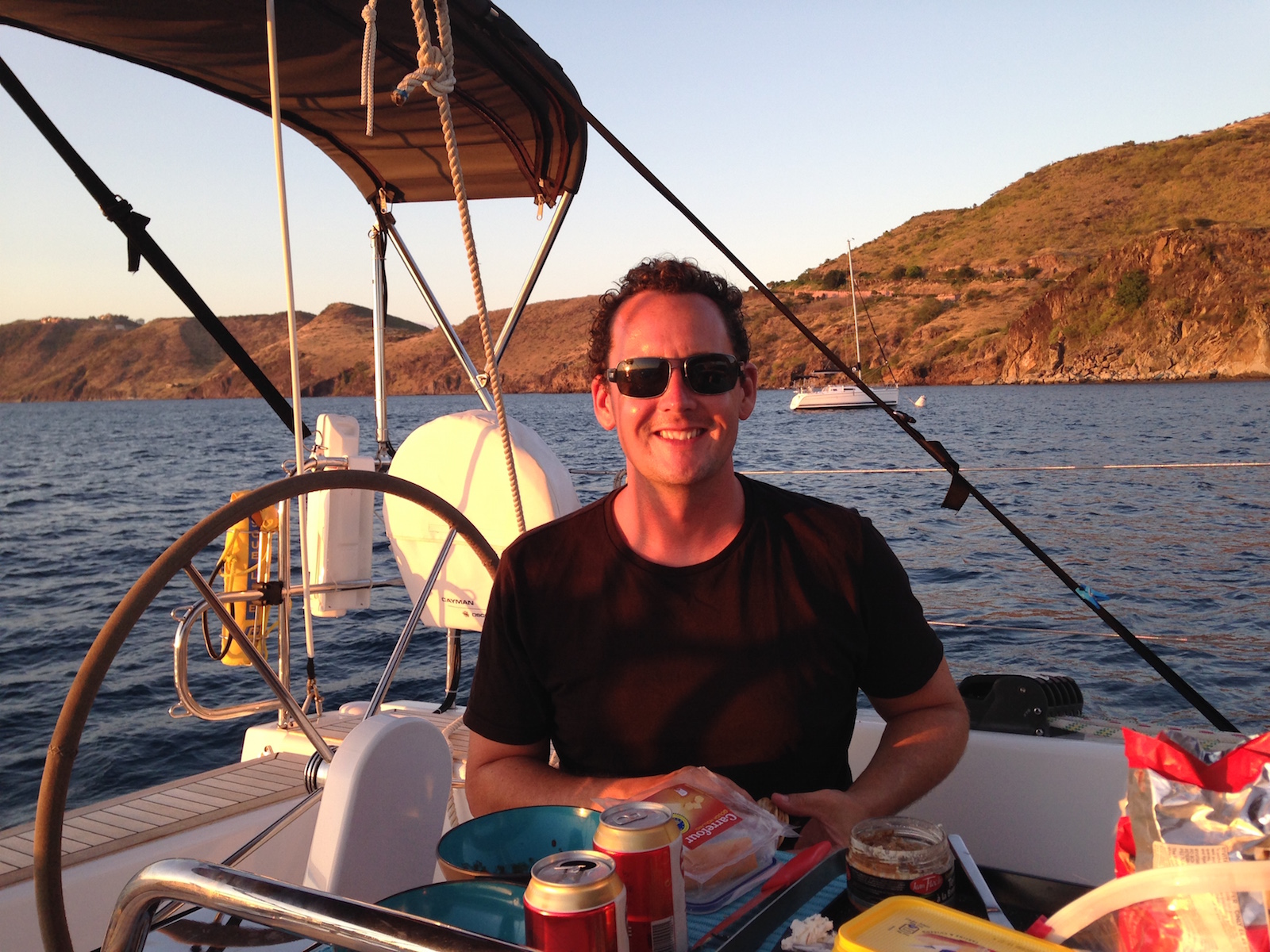 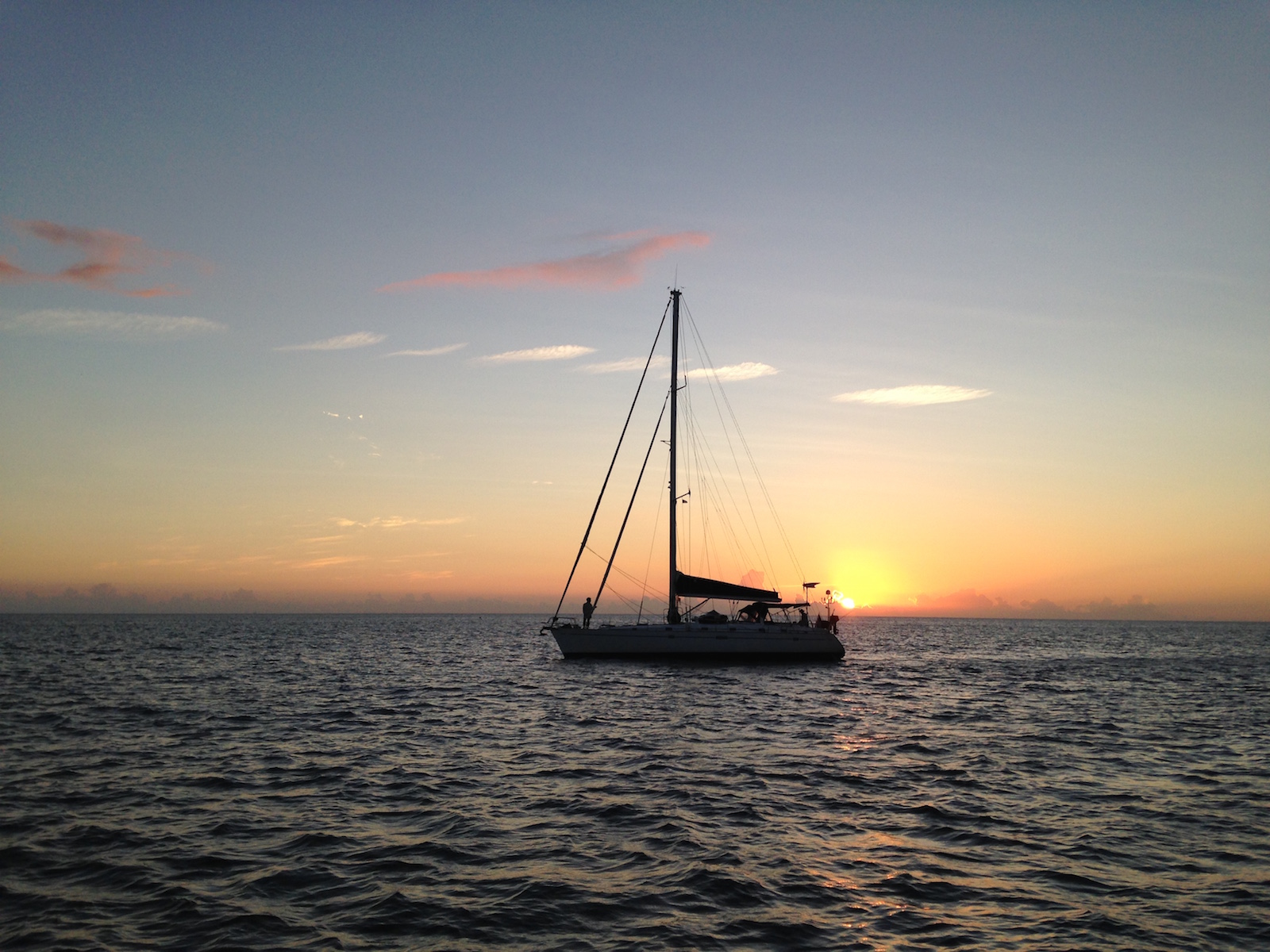 Next morning we were off. Didn’t really see much of Saint Kitts. Used it more as a stopping off point.

Wow. The top 1% sure know how to spend their hard earned cash and as far as we can tell Saint Barts has been built purely to allow them to do just that. We anchored out in the bay and came in to view the sights. 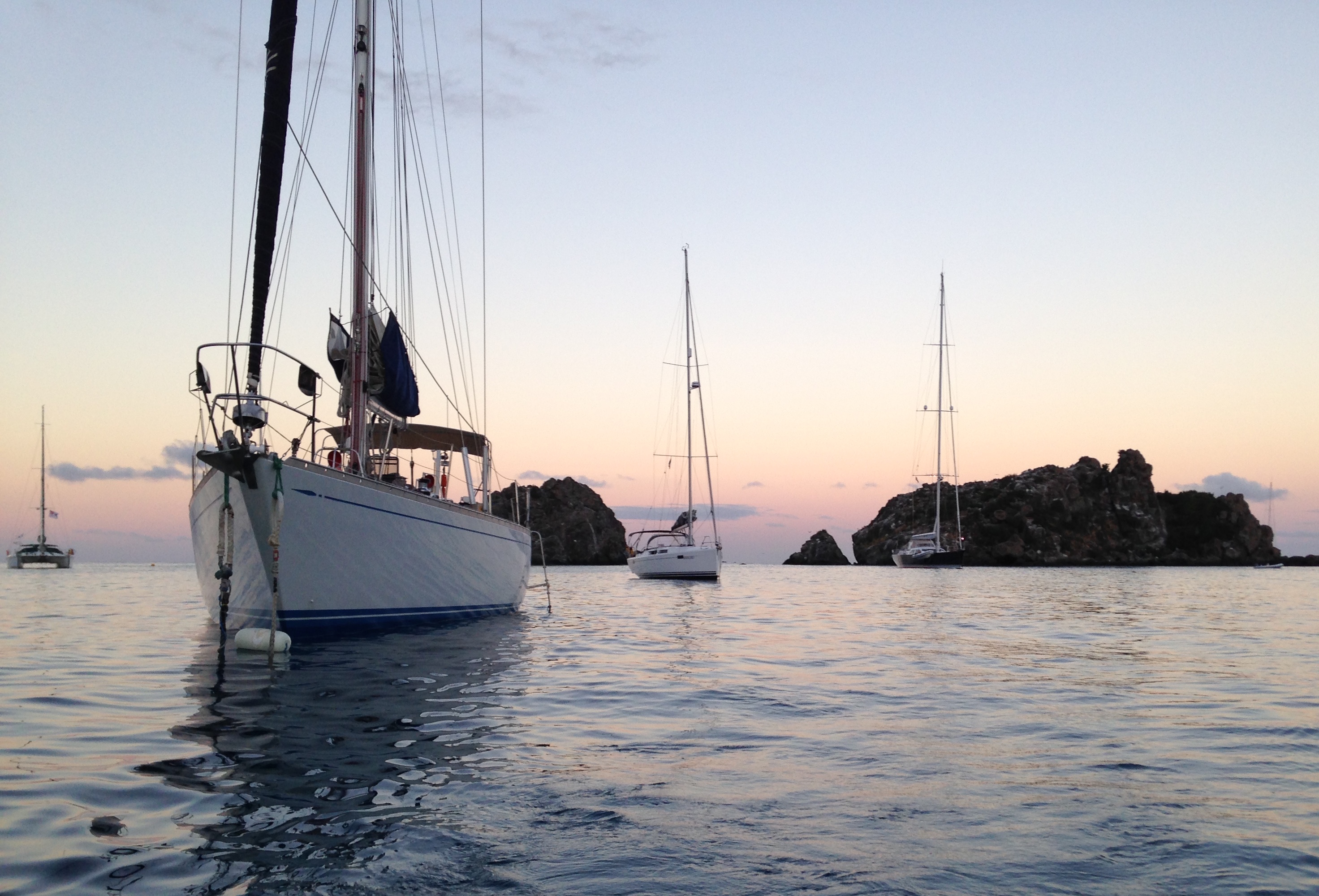 The place is pretty tiny. A small town where every shop is designer. This is a place for the super rich to come when they are bored and have run out expensive stuff to buy in their home towns.

Not really our cup of tea but we did find a nice place to chill out and eat dinner that didn’t cost $50 for a beer, and had good wifi to get some planning done, every other poor looking yachtie was in here hiding as well. 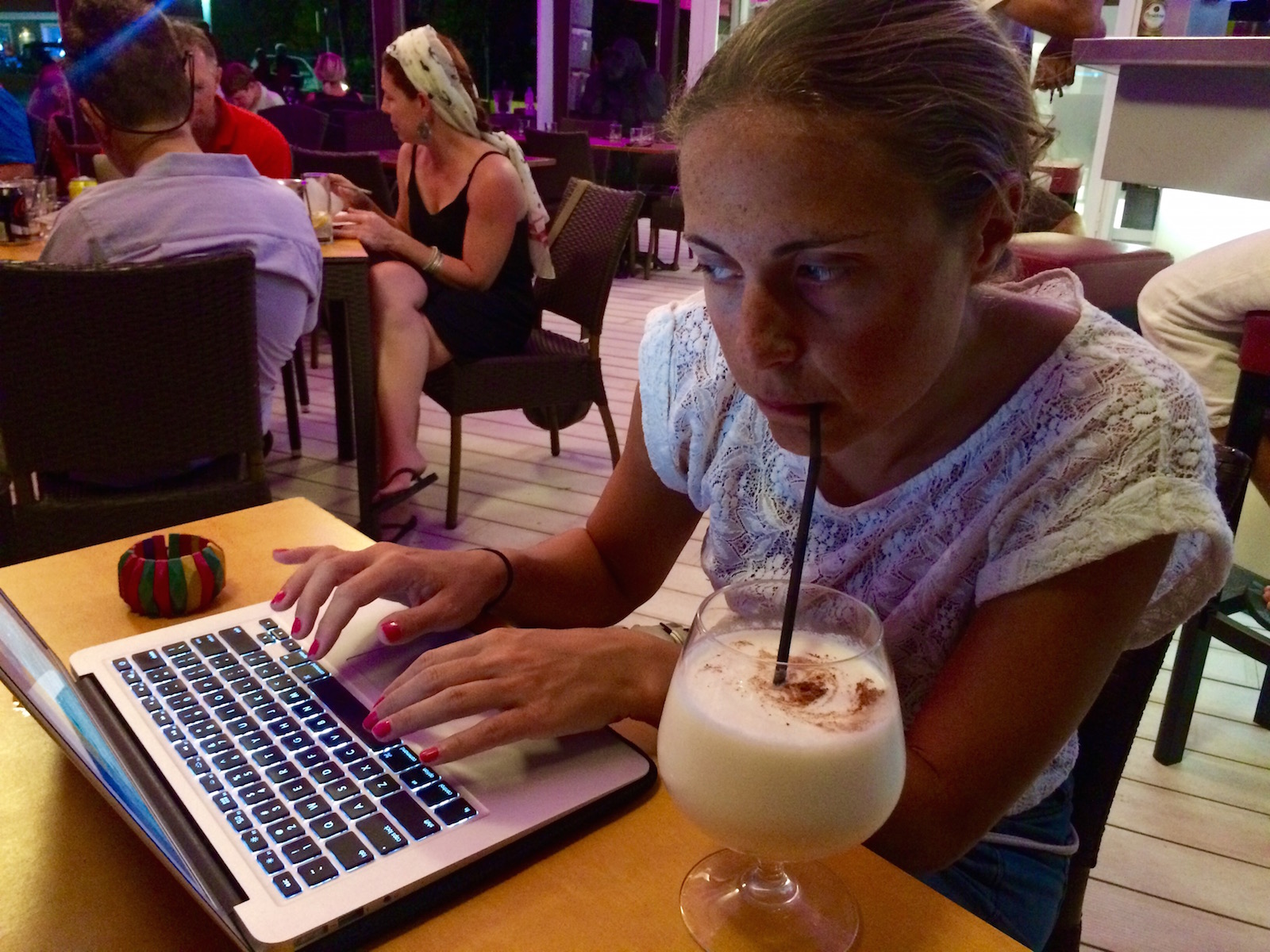 So… Kitts and Barts. I have to give them both a bit of a meh rating. Good to visit but one day in each was enough. Come on you Saints, sort it out! We had one left to go. Martin.

This is more like it! Sure there’s still the super rich doing their thing here but at least they stay over the other side of the bay and there are places to enjoy for those not earning $500,000 per day in interest.

Coming into Saint Martin’s Simpson’s bay was a great experience. There’s a bridge that opens you have to pass under. Everyone lines up and tries to squeeze through as onlookers in the bars take photos and videos hoping someone screws up. When I say everyone I mean small boats like ours, and 60m long $300,000,000 superyachts.

When the bridge opened everyone fell into line. We somehow got wedged between two of the aforementioned superyachts. A cheap filling in a half billion dollar sandwich. It was actually quite tricky keeping control of Interlude as the wash from these monsters kept spinning us around. A quick blast from their bow thruster sent us flying. We actually passed through the bridge almost sideways to counter one such blast and then pealed off to our Marina as they reversed into their huge docks. Honestly, they were so big I don’t think either of them ever realised they had an Interlude between them. 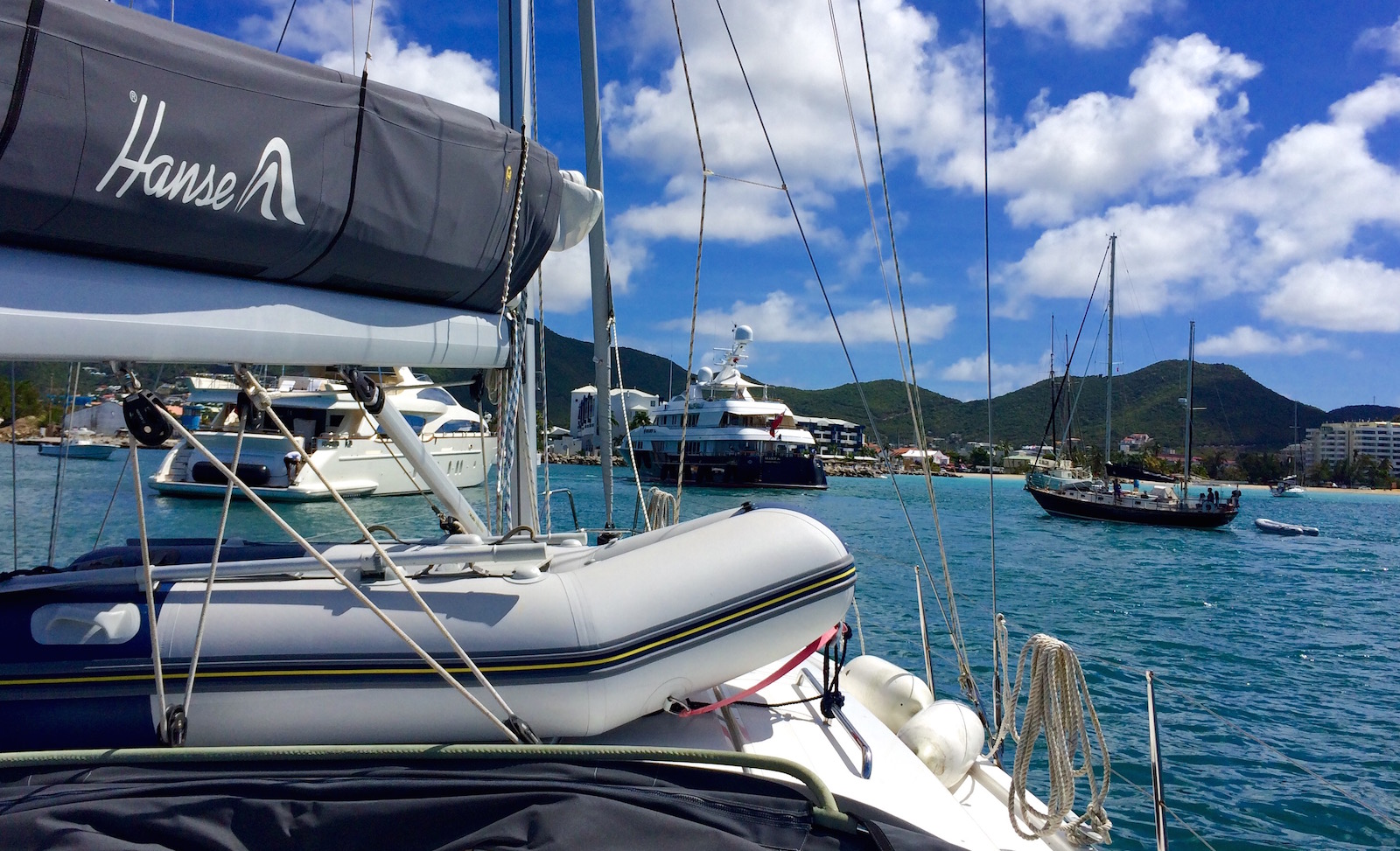 Here’s a video I found of Steve Job’s boat passing under the bridge. This was shot the day after we arrived and we saw his yacht in the bay. Great video showing the wash, and you can see the bar I was on about with everyone looking at you / hoping you slam it into the wall.

The guys from our Marina were great. They came out to meet us and explained where our berth was, where the fenders and lines needed to be, etc. As Simpson’s bay is quite complex, shallow, and during these bridge opening times extremely busy, it was great to see them providing this service. I wish more marinas would do the same, just takes a bit of the pressure off.

Getting into our berth was pretty tricky as there was a nasty cross wind blowing us across the lane. Just as I was lining the boat up to turn into our space Helen called out that our neighbours from way back in the Canary Islands ‘Miami to Ibiza’ were next to where I was trying to pull into. No pressure then. We nailed the berthing somehow and caught up with them for a while. Then we noticed Barry and Co from Matilda about 15m away! It’s amazing how we know people in pretty much every place we visit now. Barry is always good value so we popped over there and agreed to meet up for drinks later that afternoon.

We checked in, and which was a bit of a trek away near the bridge, and then got back just in time for drinks with Barry, who told us the bar we were off to was one of the ones next to the bridge. Grrr. Oh well, at least we’ve done our 10,000 steps again today.

We had a fun night out with Barry and some other guys he’d met checking out some of the local bars. There’s a great party vibe around the place as all the younger crew members sneak off the super yachts to play. We much prefer these kind of places and mix with this crowd far easier. Plus they all know where and when the happy hours are so you can bar hop never spending more than a dollar per beer. We started at the bar where everyone watches the poor souls trying to get through the bridge. Was nice watching it from the other side of the coin! We hit the strip ending up at Soggy Dollar Bar which was filled with crews and cruisers alike.

Next day we bumped into Barry and all agreed that endless happy hours all following on from one another are not good things. Soggy Dollar Bar was blamed. Breakfast sorted us out though and we set about doing a few boat projects and exploring the place. We bumped back into Cam and Sarah who were also getting projects fixed. Hope your battery change goes well Cam! Was a pretty lazy day and we ended staying on board as the weather turned really nasty that night and the thought of another night out filled us with dread. We must be getting old.

Next day we wanted to get away from the boat and go for a wander. We’d heard about a cool beach right at the end of the islands runway. One long walk later we were at the beach and hung out in the ‘Sunset bar’ to take in the views.

It’s crazy how low the planes fly over the beach. 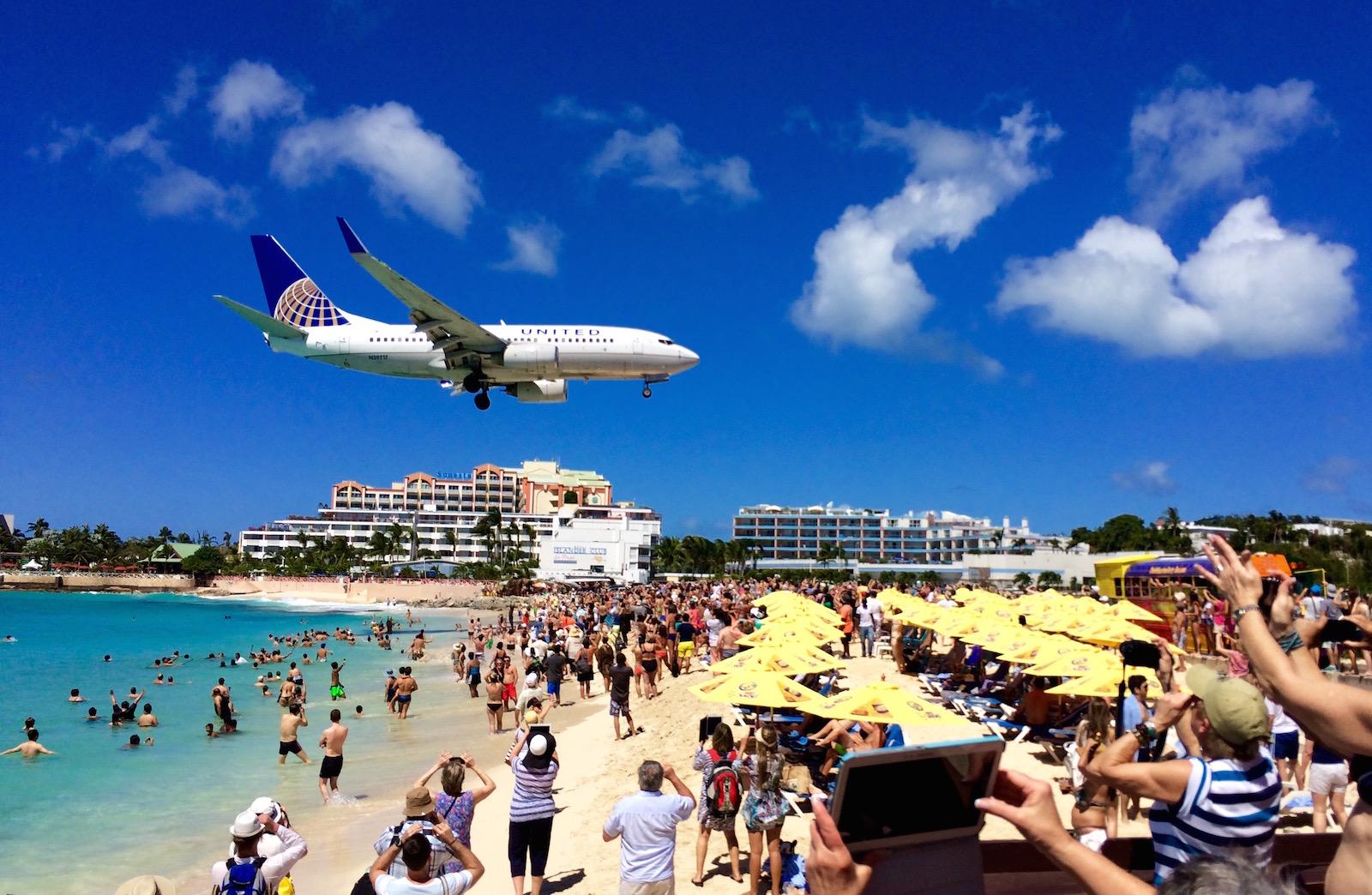 People cram themselves into the area directly under the flightpath and seconds after the aircraft bombs over you see a sandstorm blasting out to sea. If you look closely you can see people tumbling down the beach within the sand cloud smashing into the ground and each other. In most countries you’d call this extreme police riot control. Here it was called entertainment. Humans really are funny creatures but everyone seemed to be enjoying it, and their faces did look very exfoliated.

We preferred to view the madness from the bar over a nice lunch. Then a cruise ship load of people turned up and the place turned into a circus so we left and hung out on an empty beach just around the corner. Another hours walk and we were back at the boat. 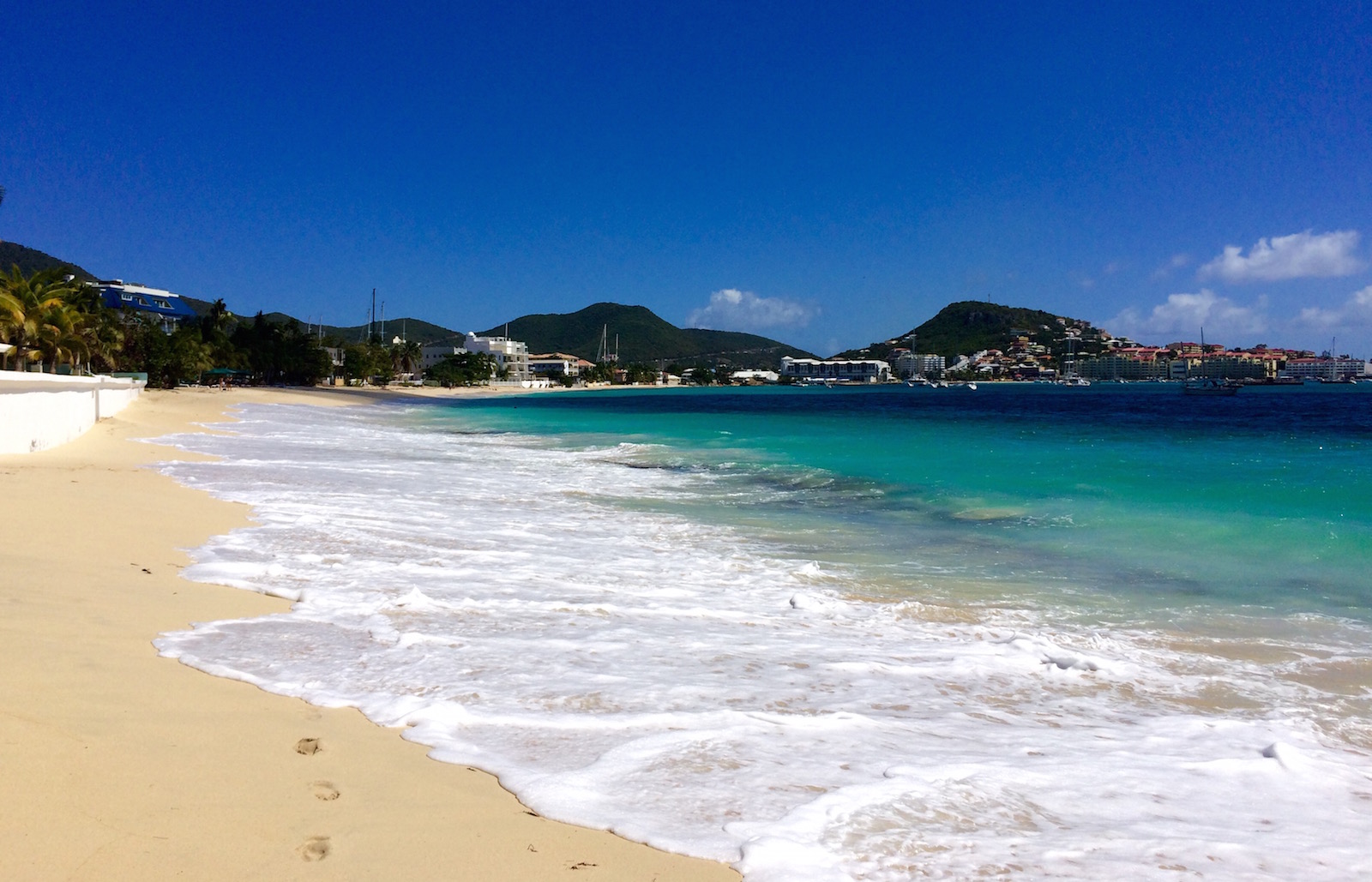 One thing we’ve noticed is that proportionately Saint Martin has a LOT of cars. It’s not that big an island but the place is packed. There must be more cars that people. Maybe Saint Martin is the Saint of traffic jams?

Also, the island has LOTS of power outages. We spoke to the Marina guy who was in charge and he said it happens all the time. They just can’t cope with demand. So every now and then everything turns off. Some places have their own backup generators but more often that not you’re just suddenly in the dark. Makes provisioning interesting through! 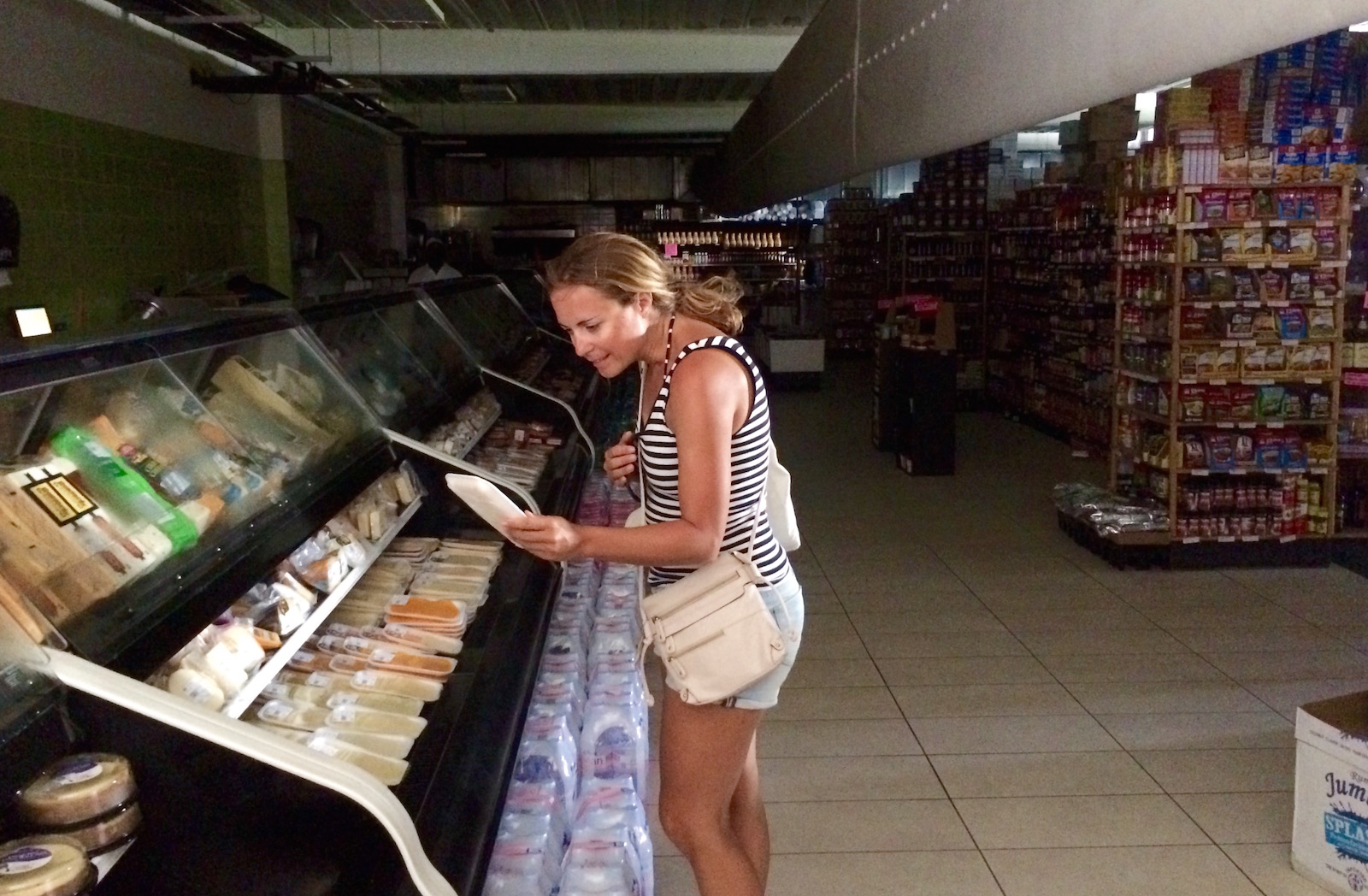 So out of the three Stains my fav by far was Martin. Very fun place to visit with lots going on, a great nightlife, good marinas, beaches, etc. You’ve got the whole package Saint Martin, well done!