We were itching to go to Tobago Cays but the weather kept us away. There was a good weather window in sight though so we decided to inch a bit closer.

Salt Whistle bay is a small bay on the island of Mayreau just around the corner. Although there are moorings there we dropped our anchor. We’ve been a bit worried about cash just lately as bank machines are few and far between and when you do find them, chances are they’re out of order. So we were getting a little low and anchoring is free!

A boat boy tried to sell us some fish, water, ice. We didn’t need any of them but Simon took pity and said we needed some bread, tomatoes and bananas. He came back with some pitiful looking supplies but we only had a $100 note. The guy said that he would bring us change but then we never saw him again. So much for a good deed and our cash reserves! Ripped off!

We went exploring. From the beach in the bay it’s just a few strides across the sand dunes to the beach on the other side. 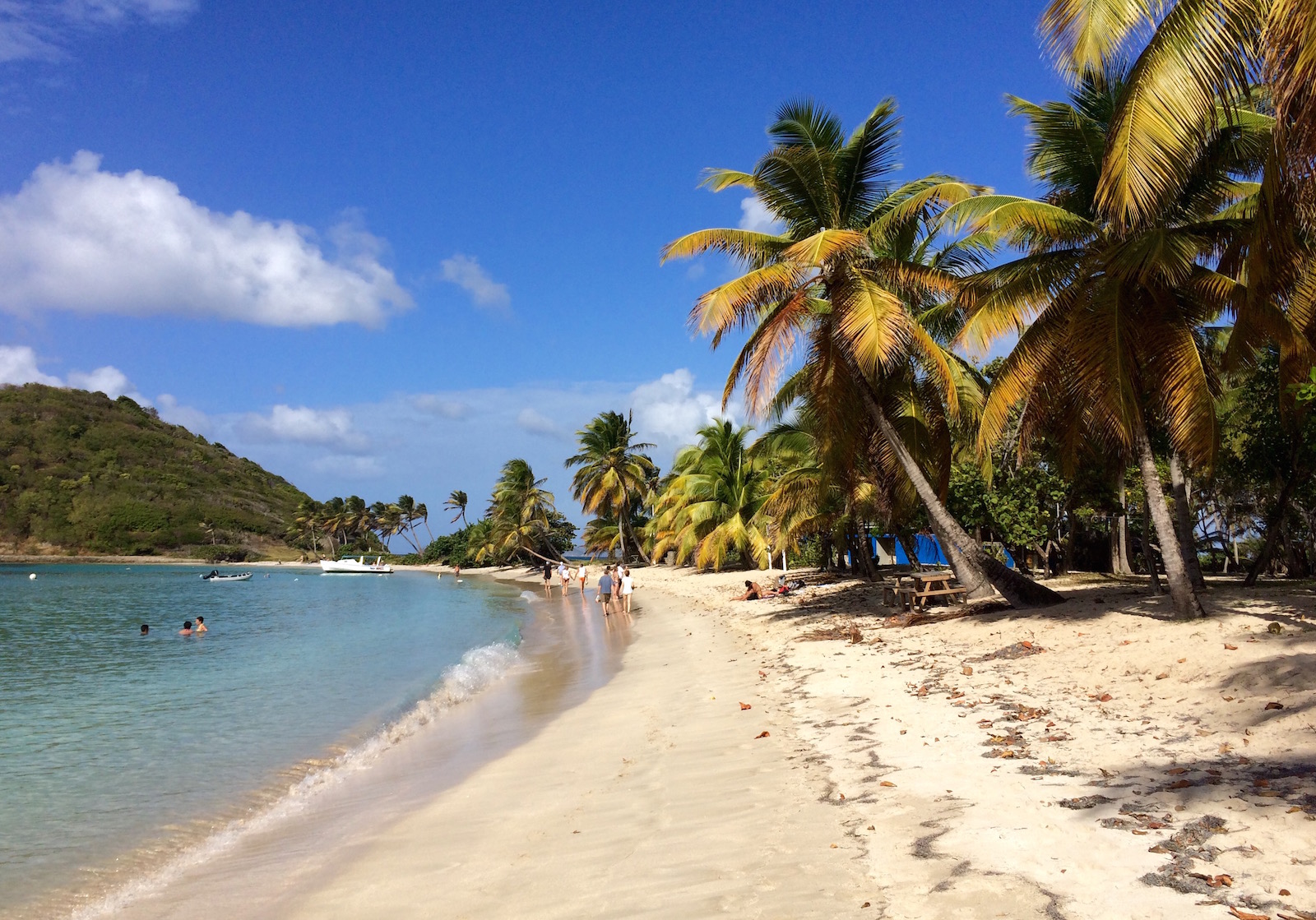 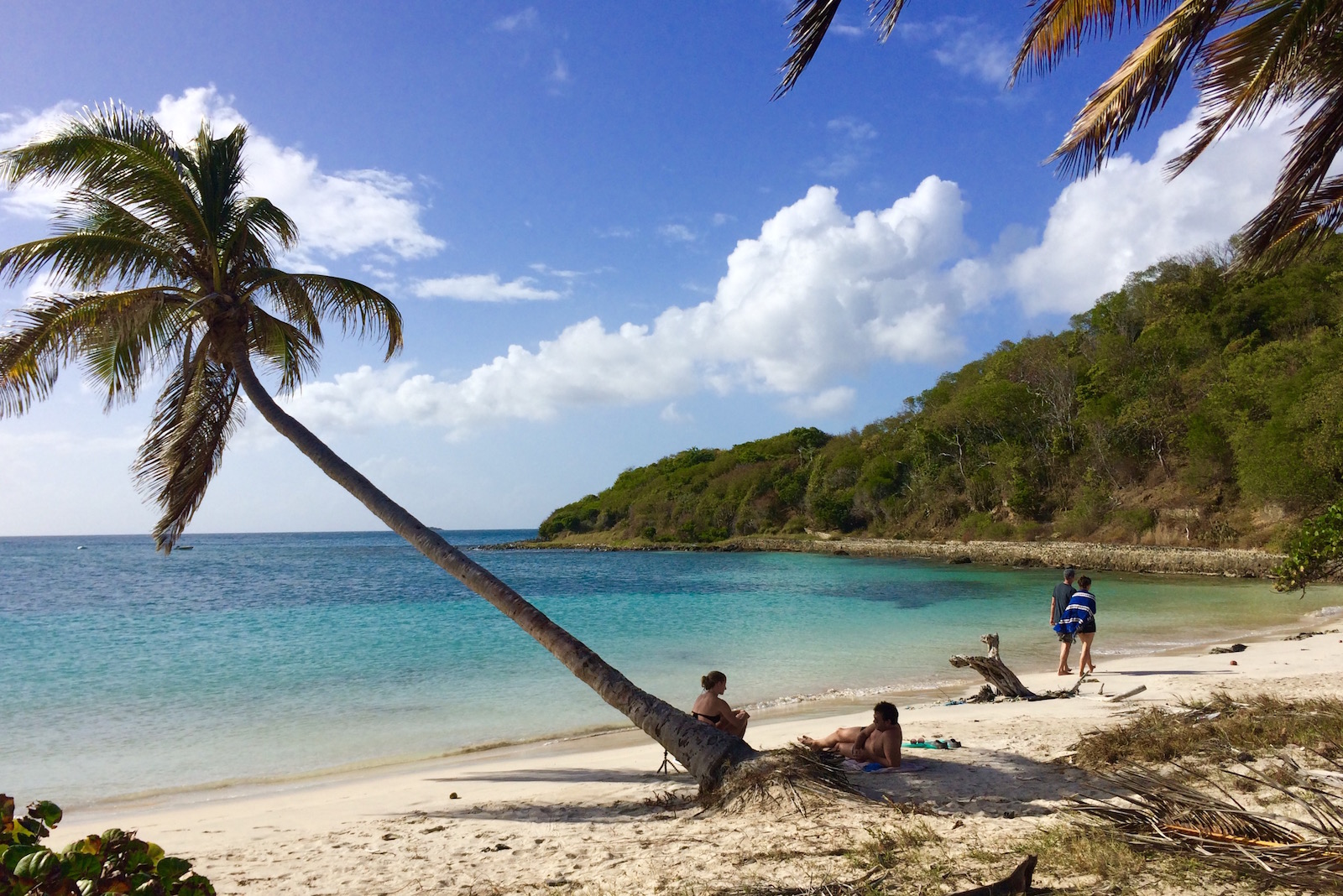 Here there were some pelicans feeding, diving from great heights into the ocean to catch fish. It’s almost like they’re too buoyant to go too far down though and end up floundering around on the surface looking a bit clumsy. It’s a wonder they catch anything. They’re great fun to watch though.

From here we walked down the tiny thin strip of a beach, wondering if we’d ever make it back if the tide came in. 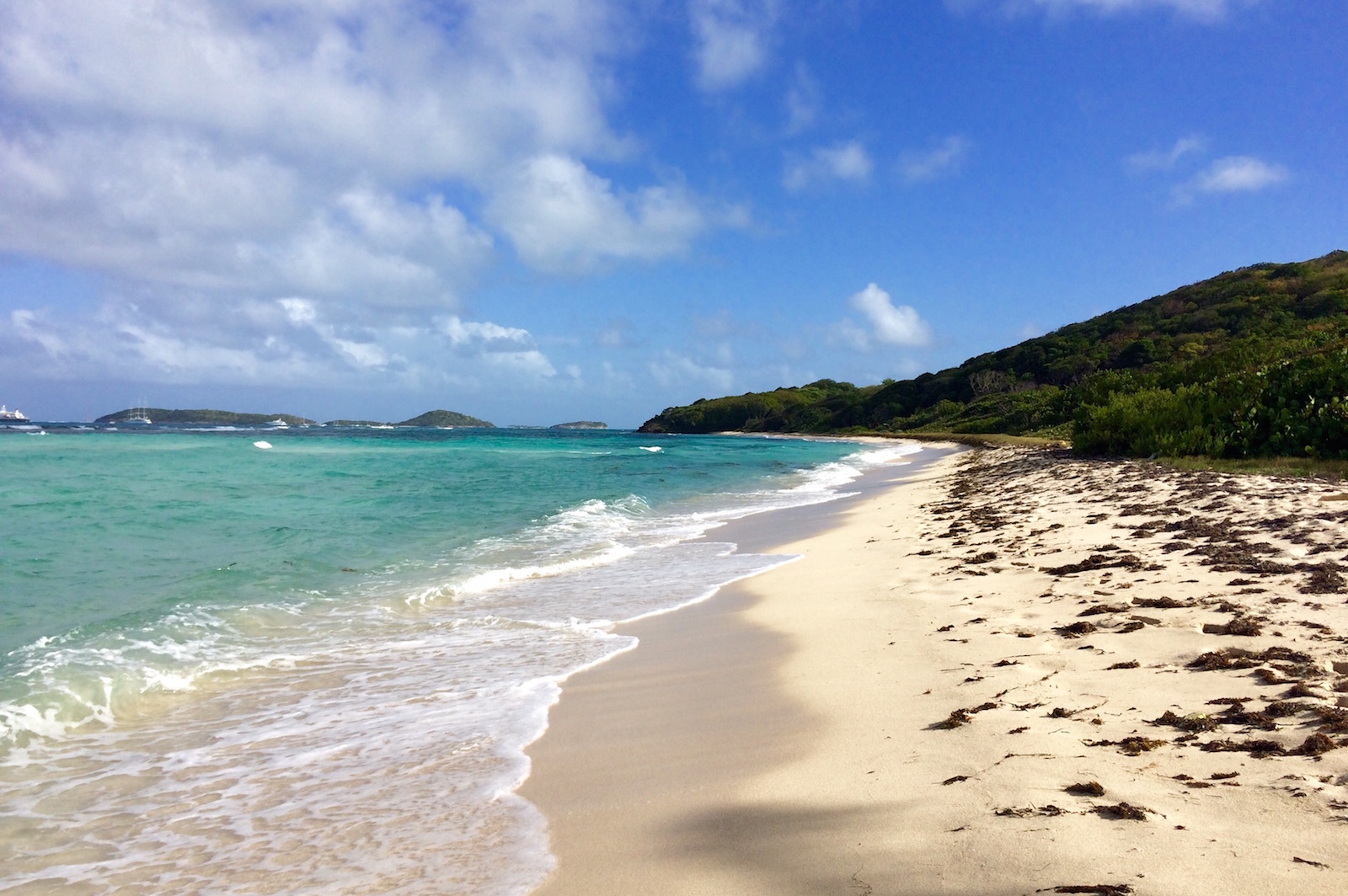 Half way down we found a track and wandered down there, until we met the road. From there we walked up into the village, a steep climb but great views. Then back down the road into the bay again. 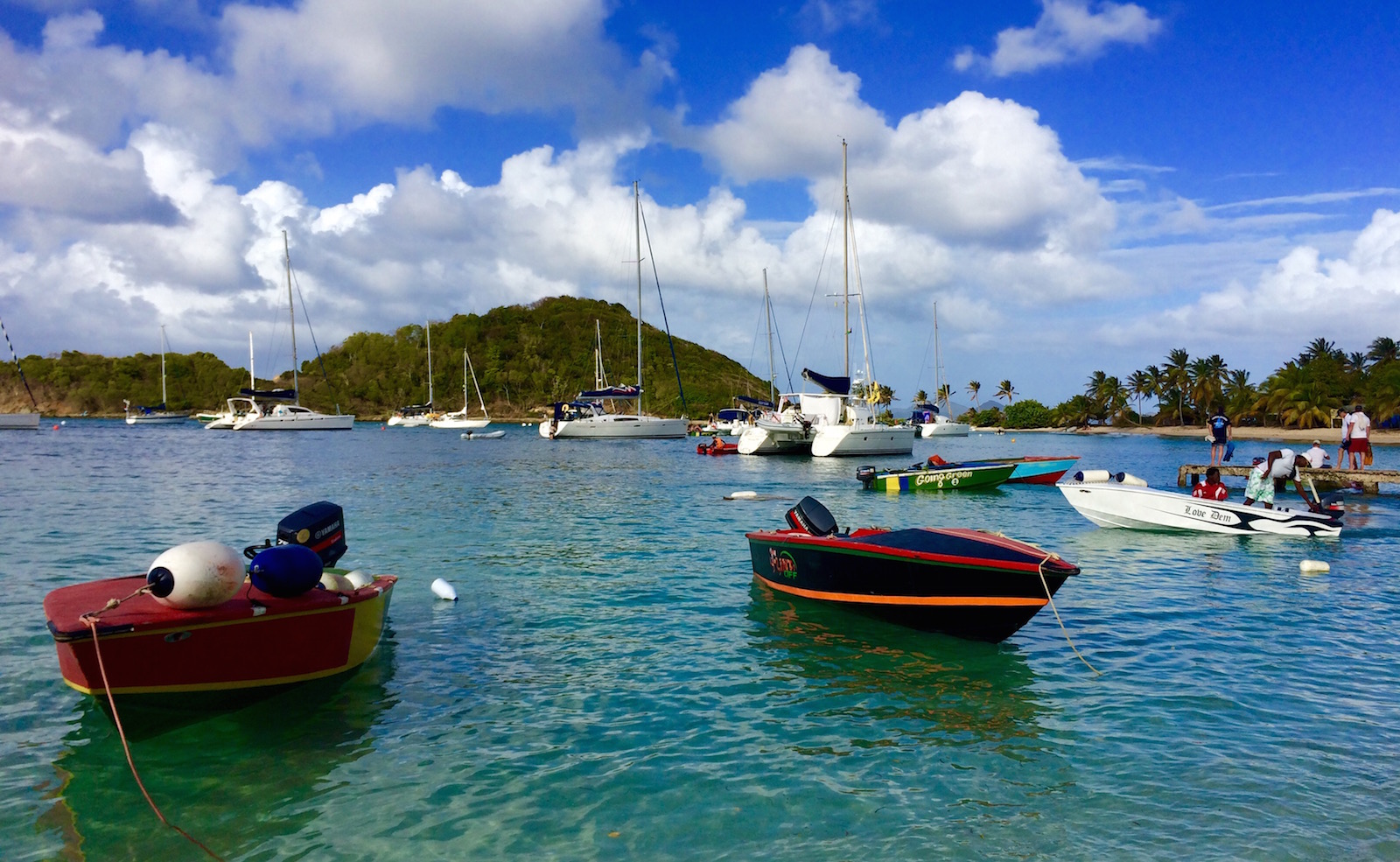 We scraped our cash reserves together for a few beers and then returned home for dinner onboard and an early night. 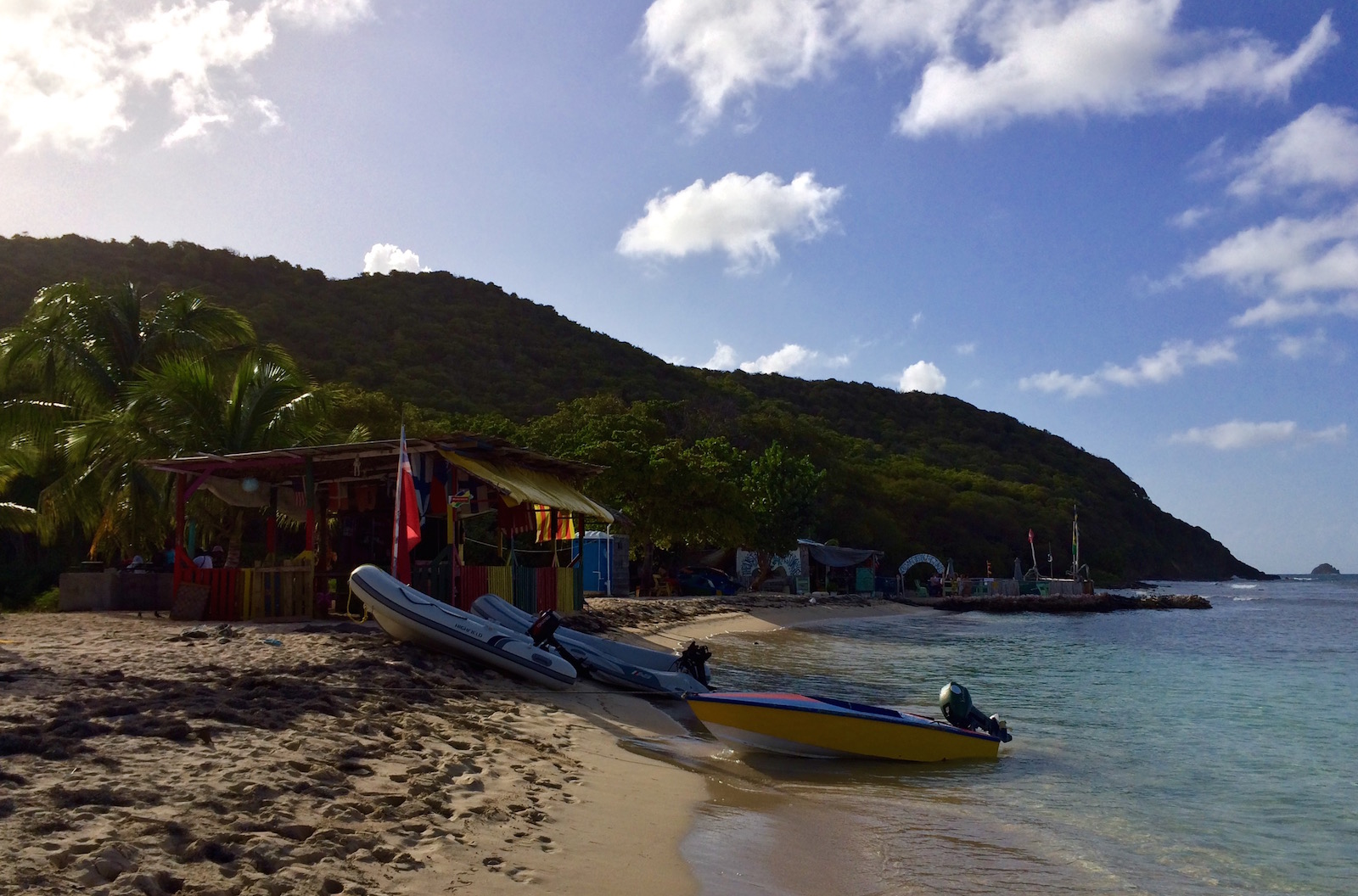 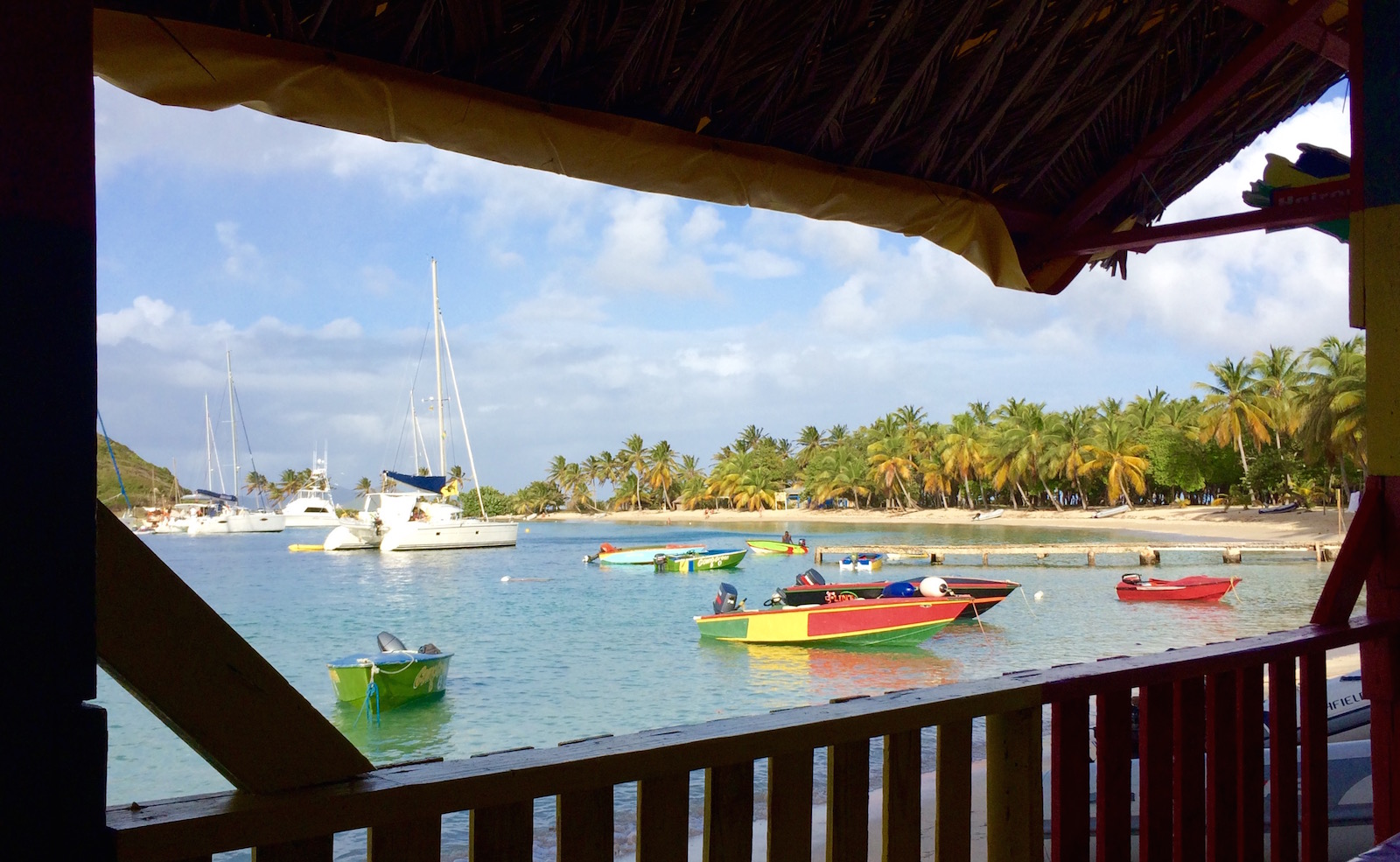 We had a slight navigational error when I sent us behind the islands (very sheltered) instead of in front of the islands where the reef is (not so sheltered). Although the holding was excellent we upped the anchor and went in search of turtles.

We had a couple of attempts at anchoring before coming to rest. Then watched our boat get closer and closer to an American boat that was now floating next to us … humm!

We spent a while umming and arrhing about whether or not to move, and then decided to eat brekkie and see how things went when the anchor settled. No sooner had I dipped my spoon in my cereal than the guy from the other boat popped over to tell us how to anchor… in his experience. We told him we’d already decided to move but that didn’t stop him. His departing comment was that he had 150 feet of chain out. That’s 45 meters of chain.

In less than 3.5 meters of water that’s more than a 1-10 ratio which is insane, usually we have 4-5 in average conditions. It basically means at some point or other he will probably land next to every boat in the anchorage. If we weren’t convinced before we were now. We upped and moved again.

That’s when we noticed our Aussie friends from Colombo II anchored there. They we just leaving but popped by to say ‘G’day’ and hopefully we’ll see them again soon.

After all that we were ready for some swimming with turtles. One popped by as Simon was checking the anchor so we knew they were about.

We headed to shore and jumped in with our snorkels. We were swimming around for a while spying the odd fish here and there, huge starfish and spiky sea urchins. No turtles.

I finally gave up and we were heading back to shore when I got the call ‘Here’s one’. Yay! All was not lost as a lumbering turtle was making his way past bringing us lots of smiles. He finally disappeared into the blue so we left him in peace. And then would you believe it there was another one! We finally made it out a bit wrinkled but happy with our lot.

We decided to head to another beach and popped by our friends, Spray, who we noticed were also in the bay. They have swapped their guests since we last met them, son and daughter-in-law have gone home and daughter and son-in-law have arrived. It was great to meet more of their lovely family. They invited us to a lobster BBQ and how could we resist?

Luckily that morning we’d also found a stash of cash in the backpack! Phew! We knew we hadn’t spent that much.

The next island was inhabited by huge lizards that climb trees, which makes you wonder what else is hiding up there! It’s a bit perturbing.

Later a boat boy came by with the Spray family to pick us up for the BBQ. 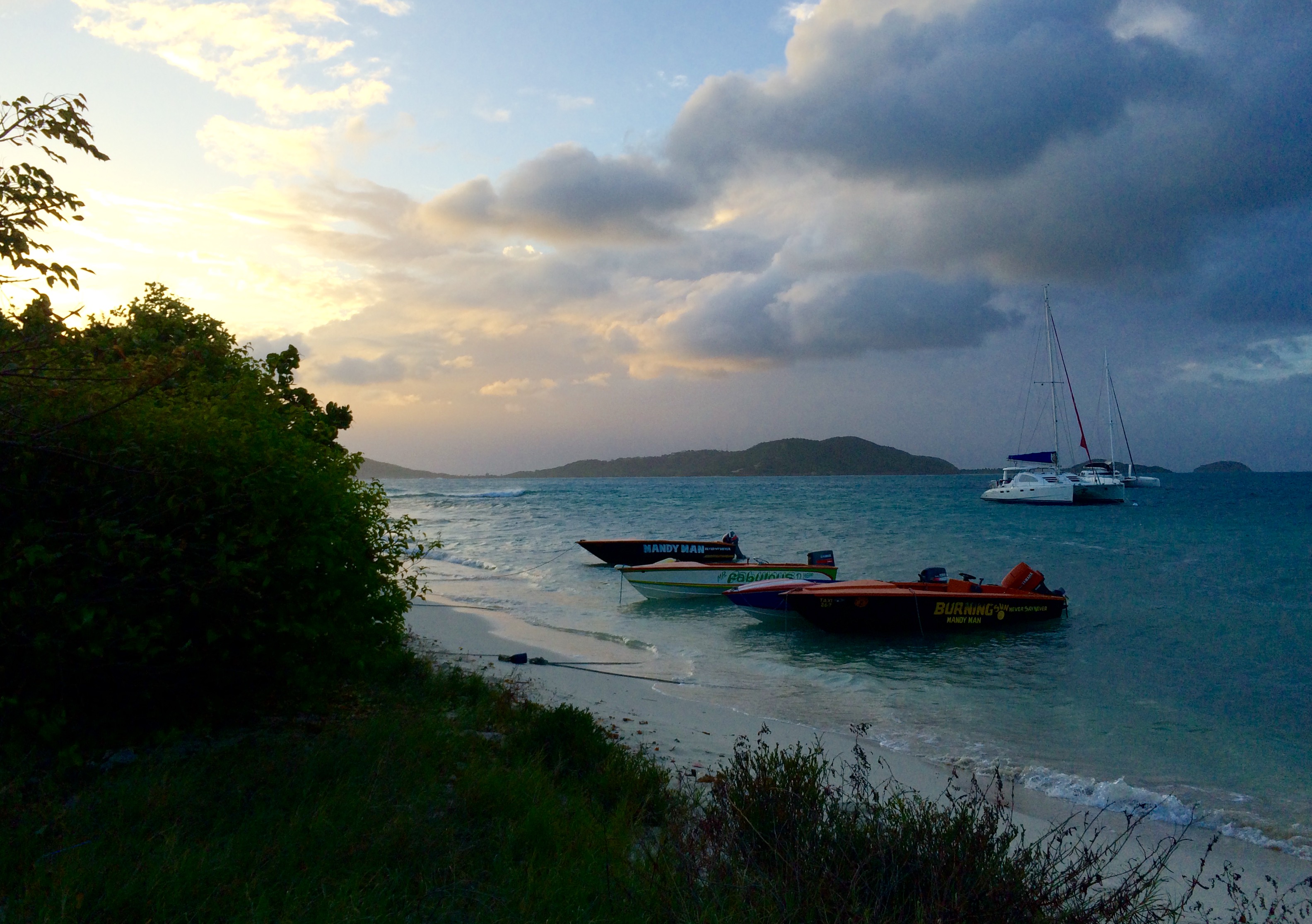 It was amazing location just on the other side of one of the islands. 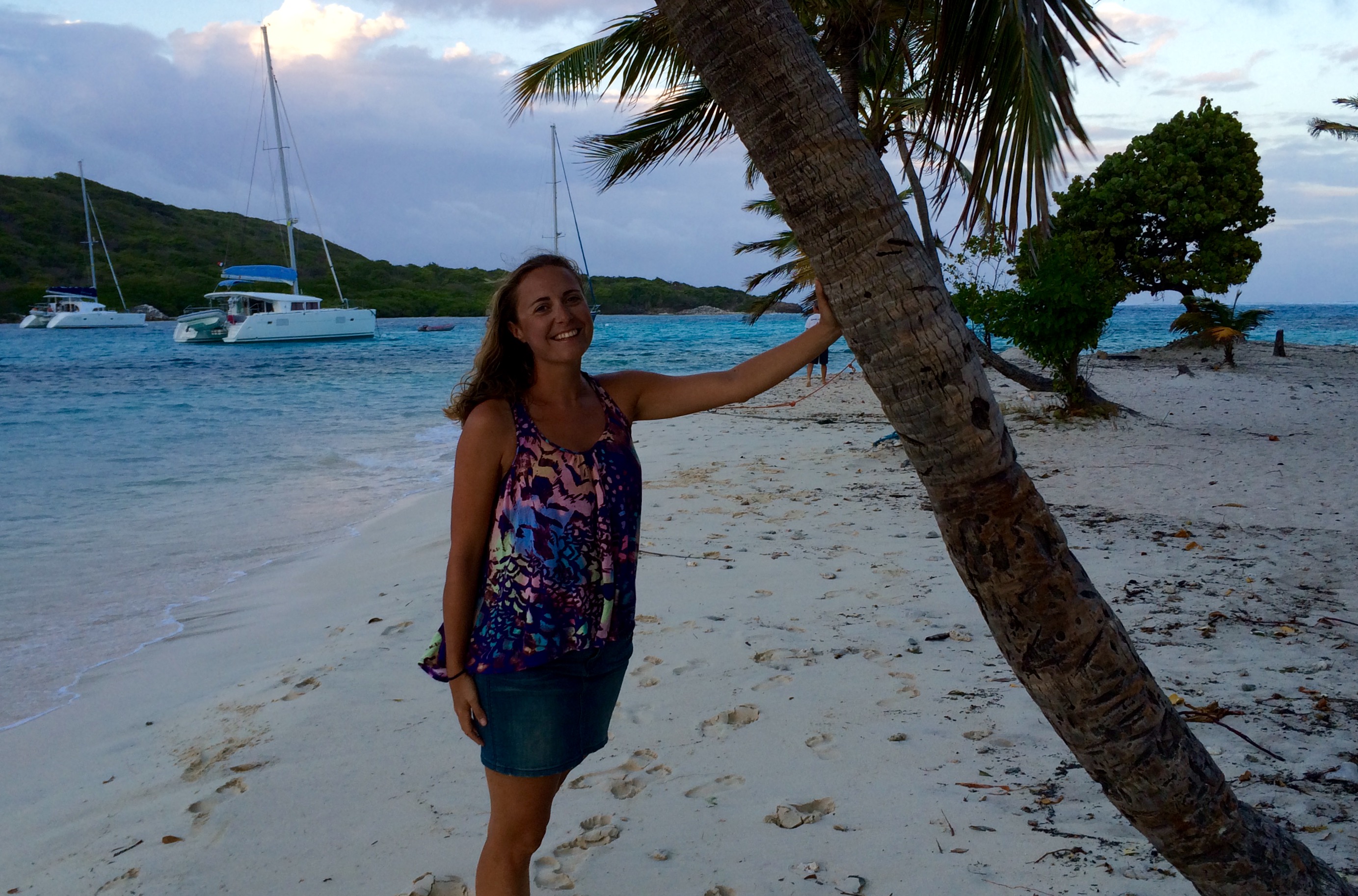 Actually one of the islands here is Captain Sparrow’s island from Pirates of the Caribbean. 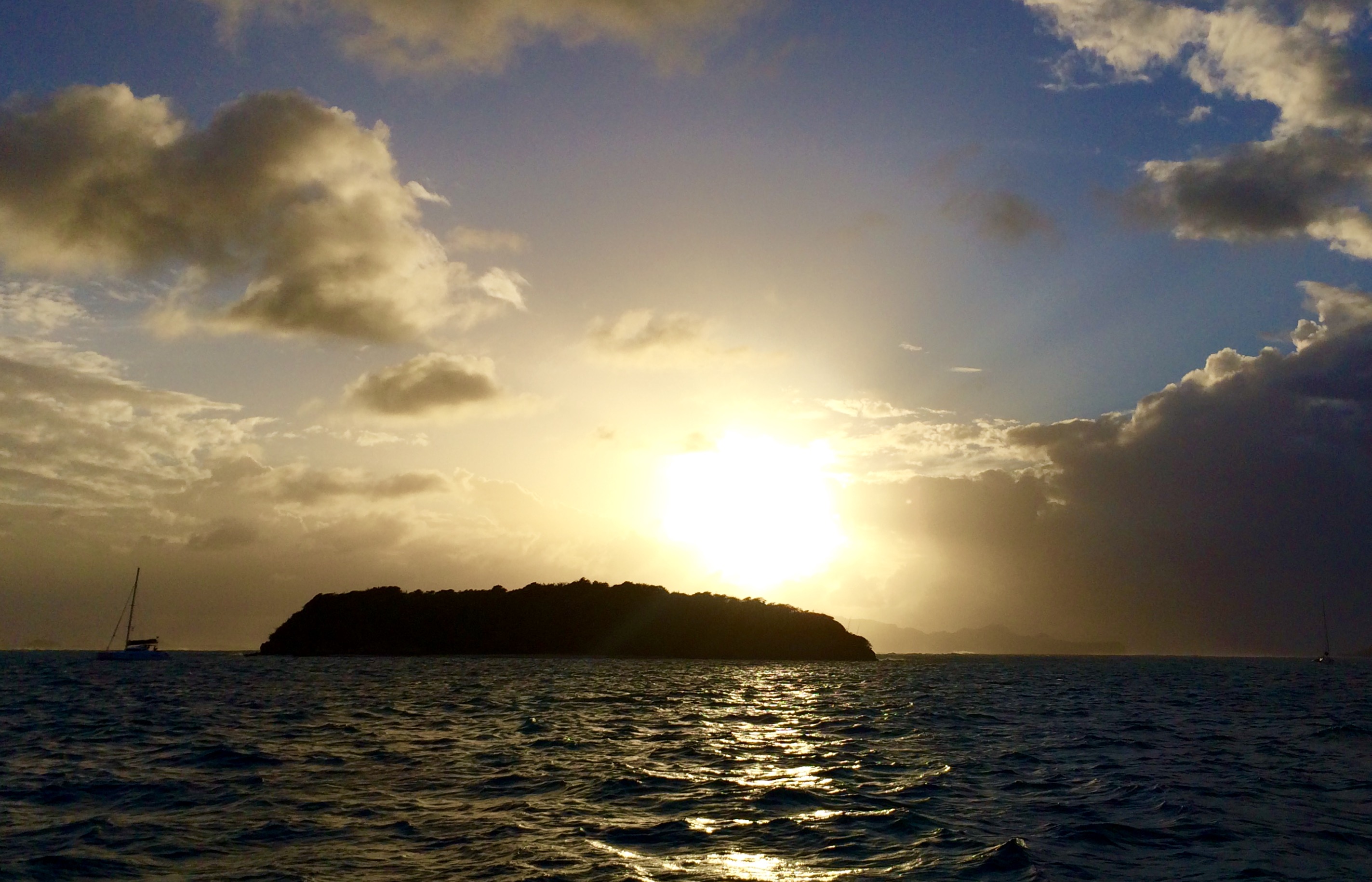 It’s lobster season here and the lobsters were huge and yummy! We shared a few bottles of wine and had a great time. 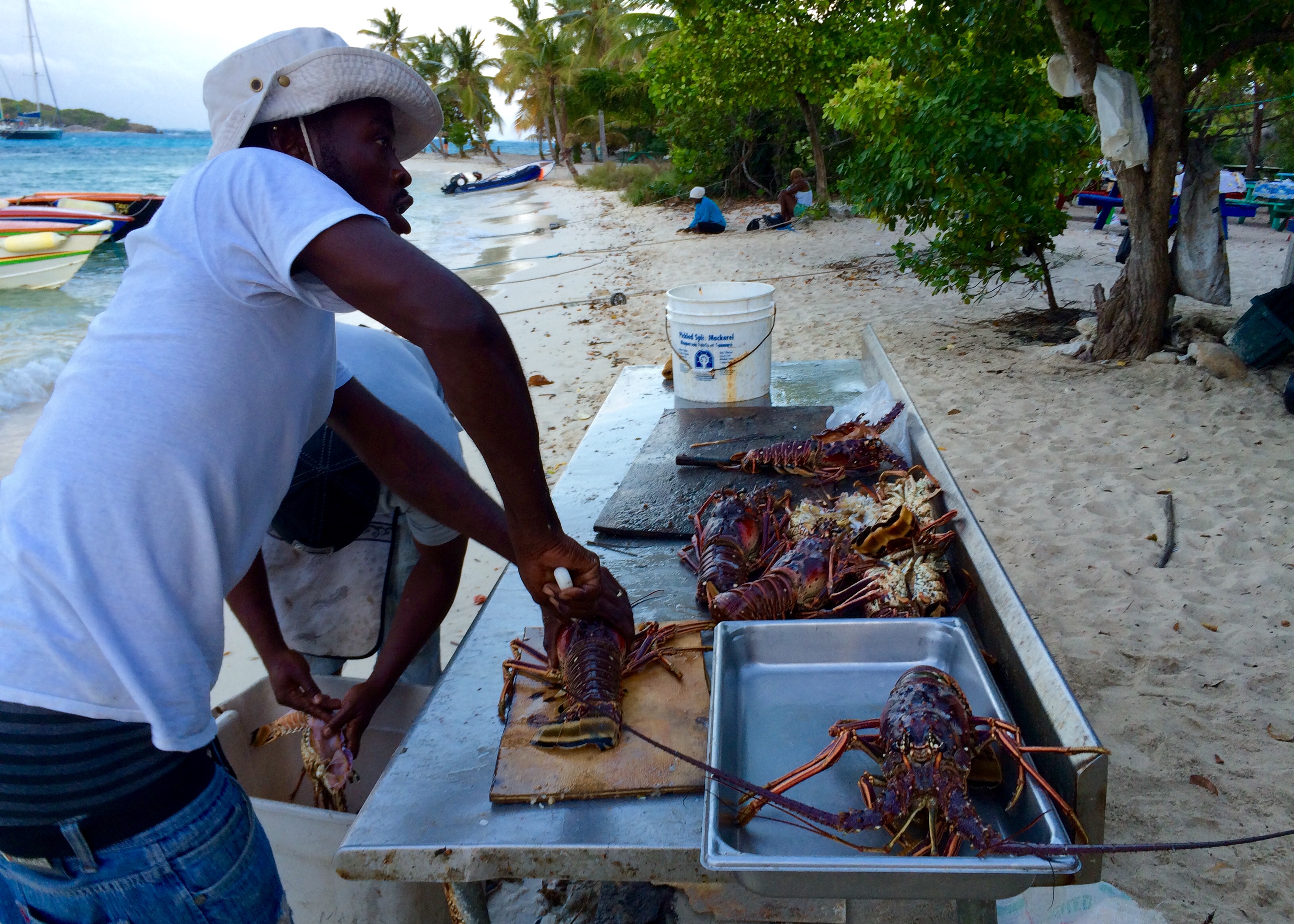 Then it was time to return. The boat boy picked us up to take us back around the island to our boats. When we turned into the anchorage it was very pretty with all the anchor lights shinning like a mini village. The boat boy was amazing and knew exactly which boat was ours. What a night. Thanks Spray!

Later that night was squally to say the least. Big winds and lots of heavy rain. We were sure glad we’d moved the boat earlier in the day. The rain was so heavy you couldn’t see another boat, even though you knew they were close by. Pretty scary!

Seems that two days of fair weather has turned into one so we’ll probably be heading off again tomorrow to seek shelter once more.