After an amazing sail over from Puerto Rico we arrived at the picture-perfect San Blas islands. We were pretty nervous coming into the small anchorage as we’d heard so many horror stories about yachts getting wrecked on the reefs. But we’d checked and double checked the waypoints and Simon followed these to the letter, while I stood on the fore-deck with my eyes trained constantly at the water. 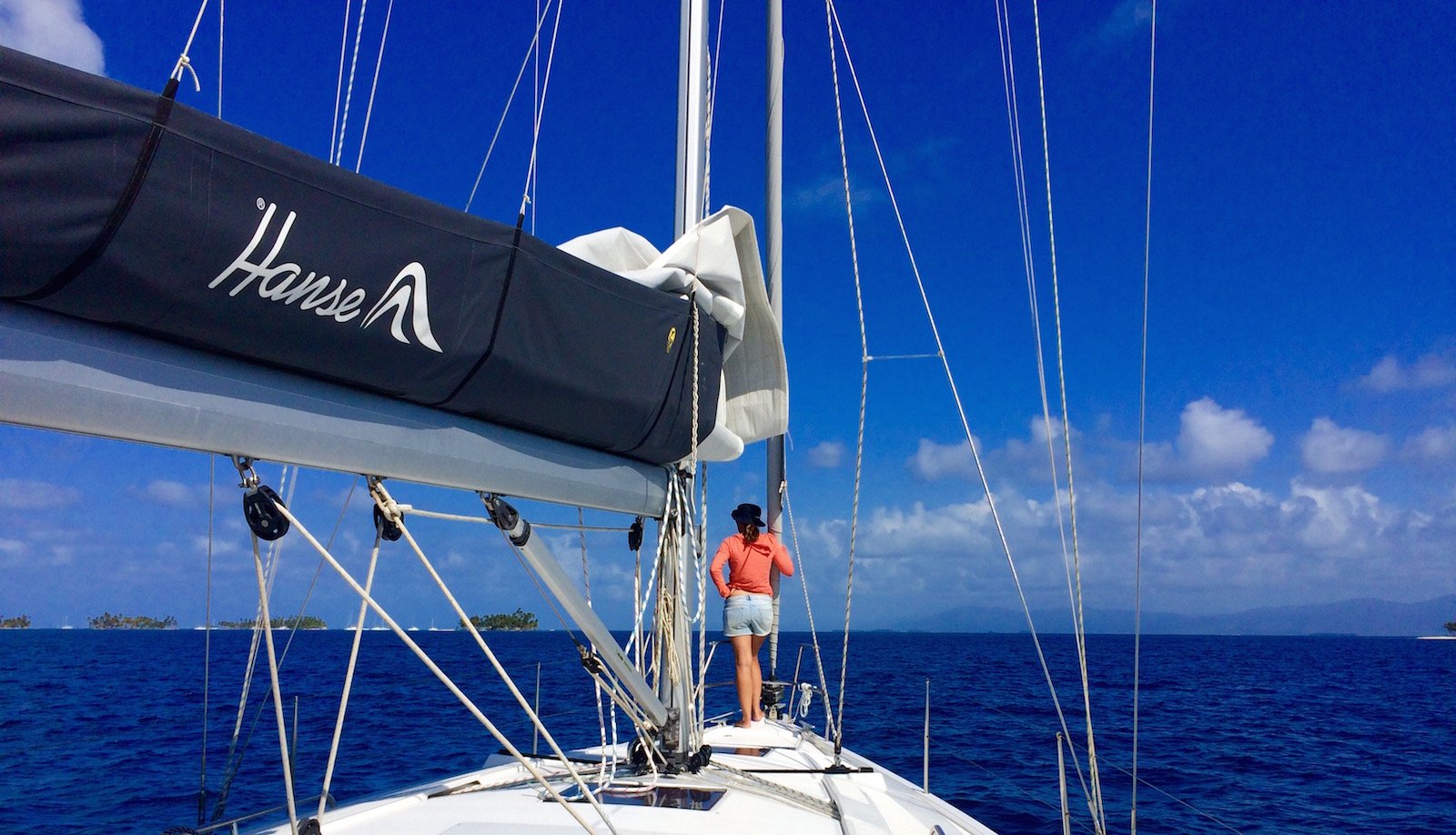 We had good light and could make out the reefs as we passed and made it safely into the anchorage. It’s quite deep and drops off rapidly, plus with a reef directly behind us we wanted to make sure we were set before setting off to land. We had lunch and studied our transit lines. Then once we were confident we jumped into the dinghy and headed to the dock in search of customs. 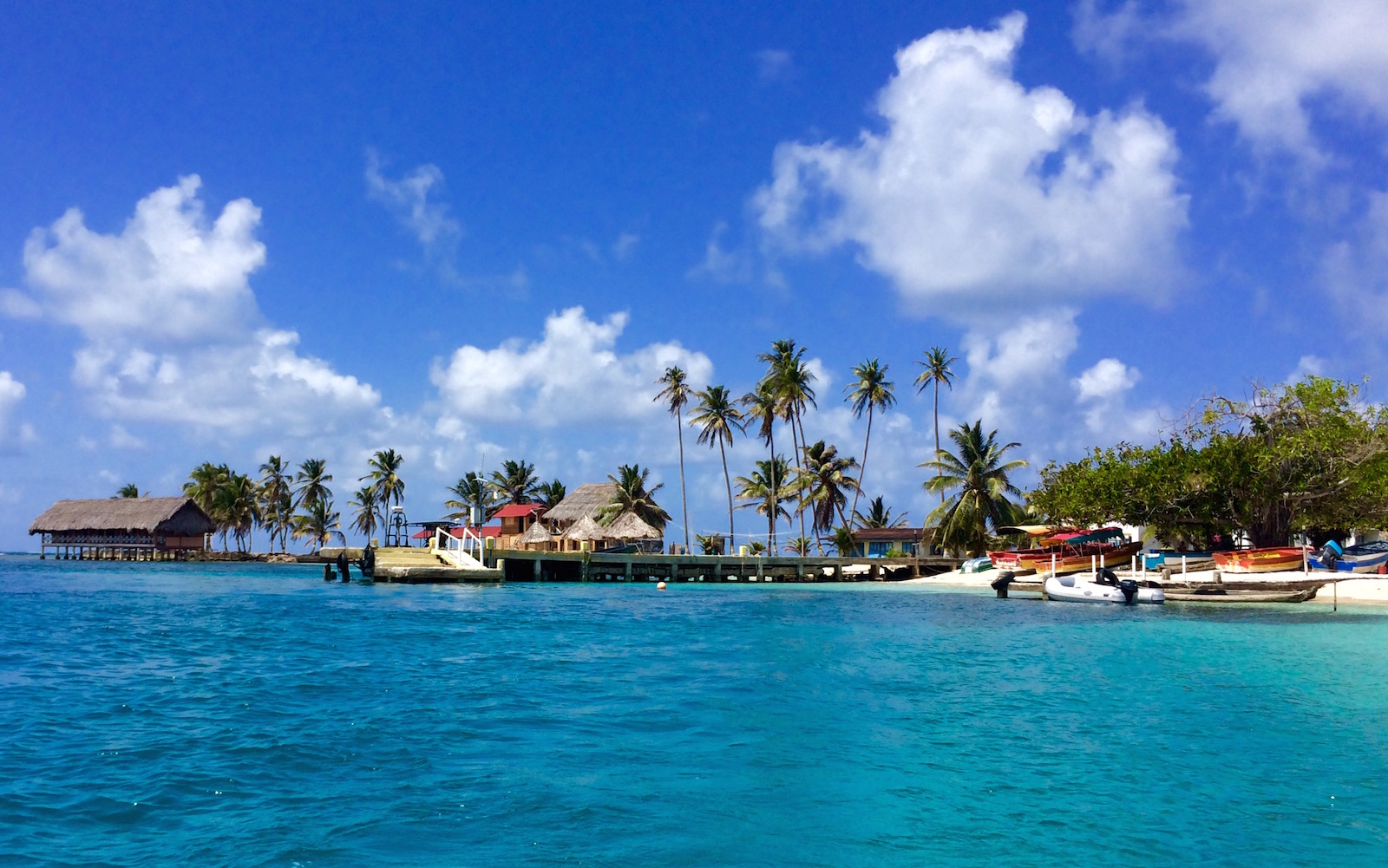 They’re located right next to the dock but it turned out they were on lunch – doh! We’d forgotten that we had crossed a timeline or two and hadn’t reset our clocks. 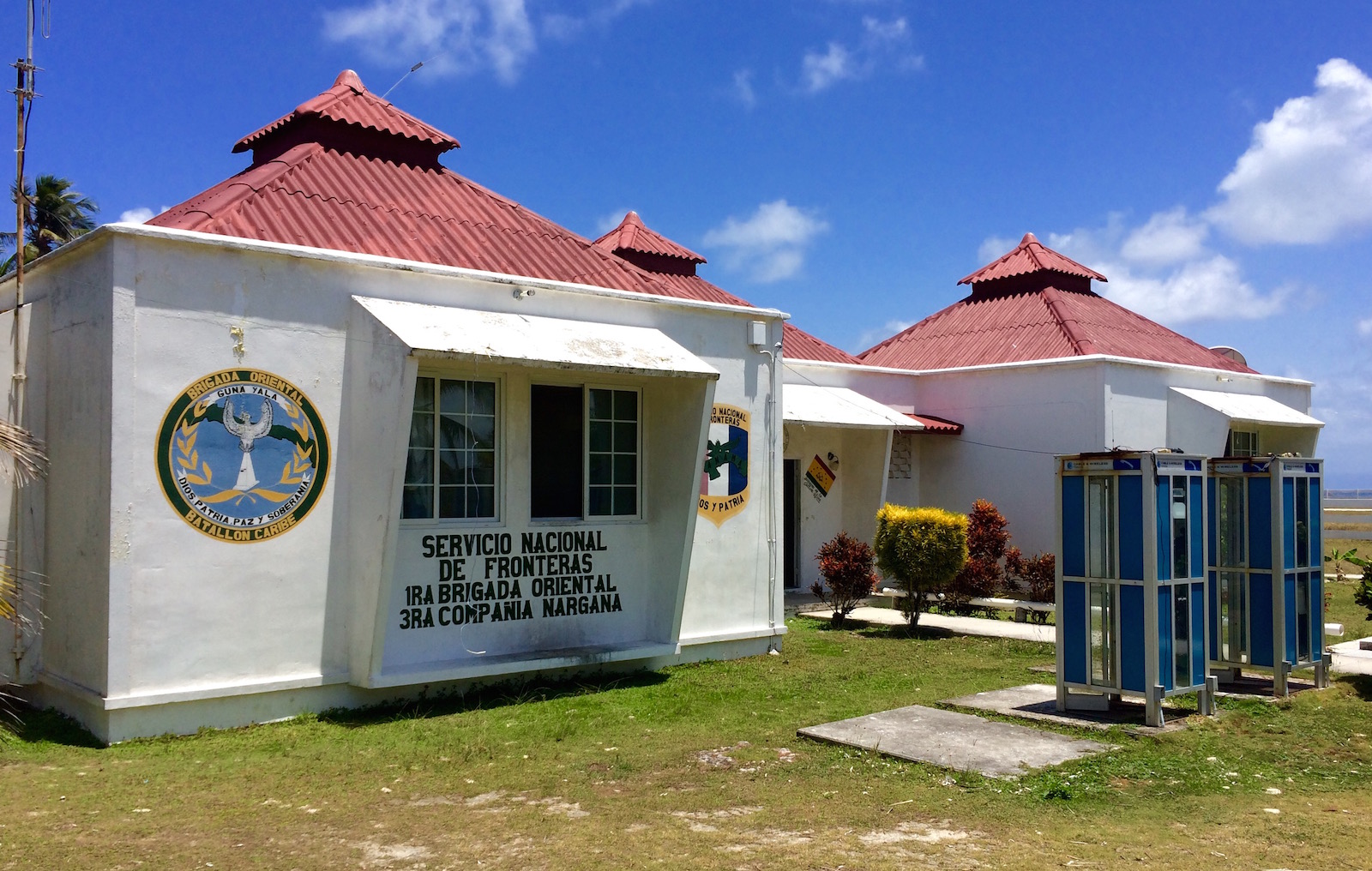 Oh well it gave us time to explore the tiny island that is Porvenir. 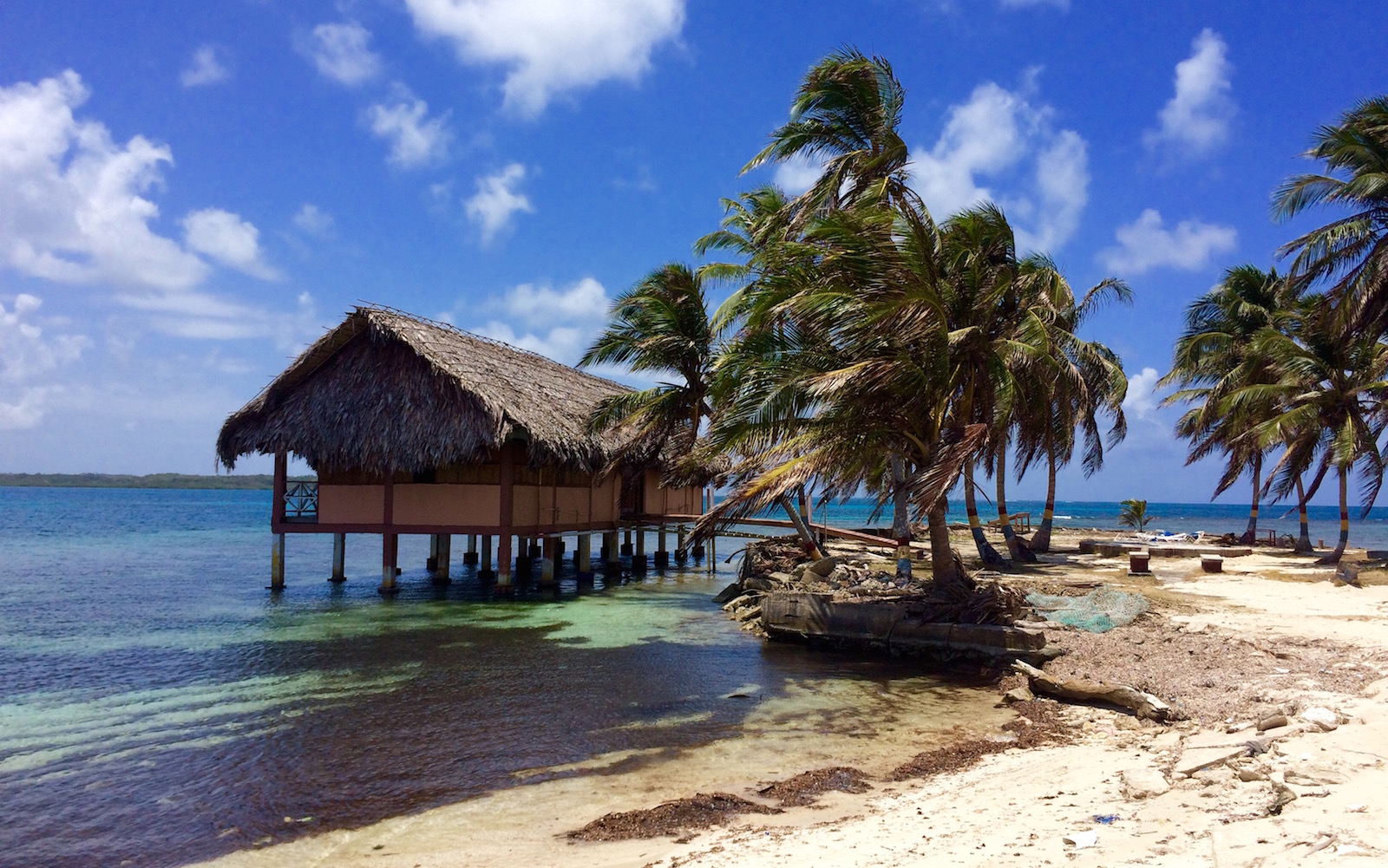 We felt like intruders as we wandered the island, there’s no distinct boundaries between the huts, gardens and I guess public areas. The toilets were little more than a hut with a hole over the sea. We were definitely somewhere very different.

We’d come to the end of our wanderings when we saw a man cross the airport runway so we decided to follow him (as you do!). 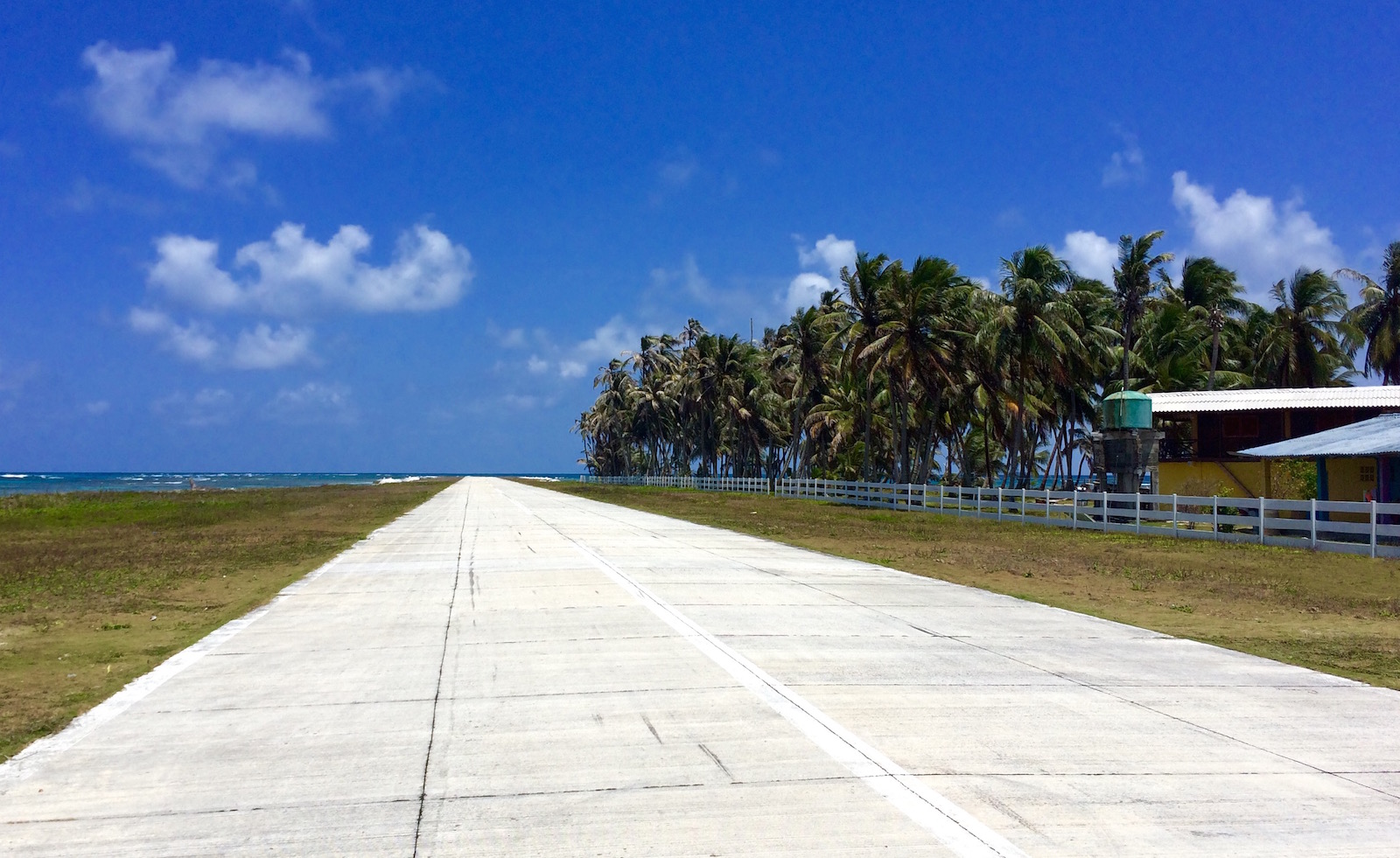 We came to a hotel and had a cold drink before heading back to customs. Clearing in was pretty straight forward but set us back a penny or two. Immigration and cruising permits do not come cheap here, but we’d need them for Panama anyway so we stumped up the fees.

Then we headed back to the boat where we were visited by some of the local Kuna people selling molars. These are pretty pieces of embroidered fabrics that they traditionally use for their dresses. We chose a few samples and enjoyed some laughs as we didn’t speak the same language. The Kuna people have their own language but as a result of the Spanish conquest the common language spoken between the locals and tourists is Spanish. 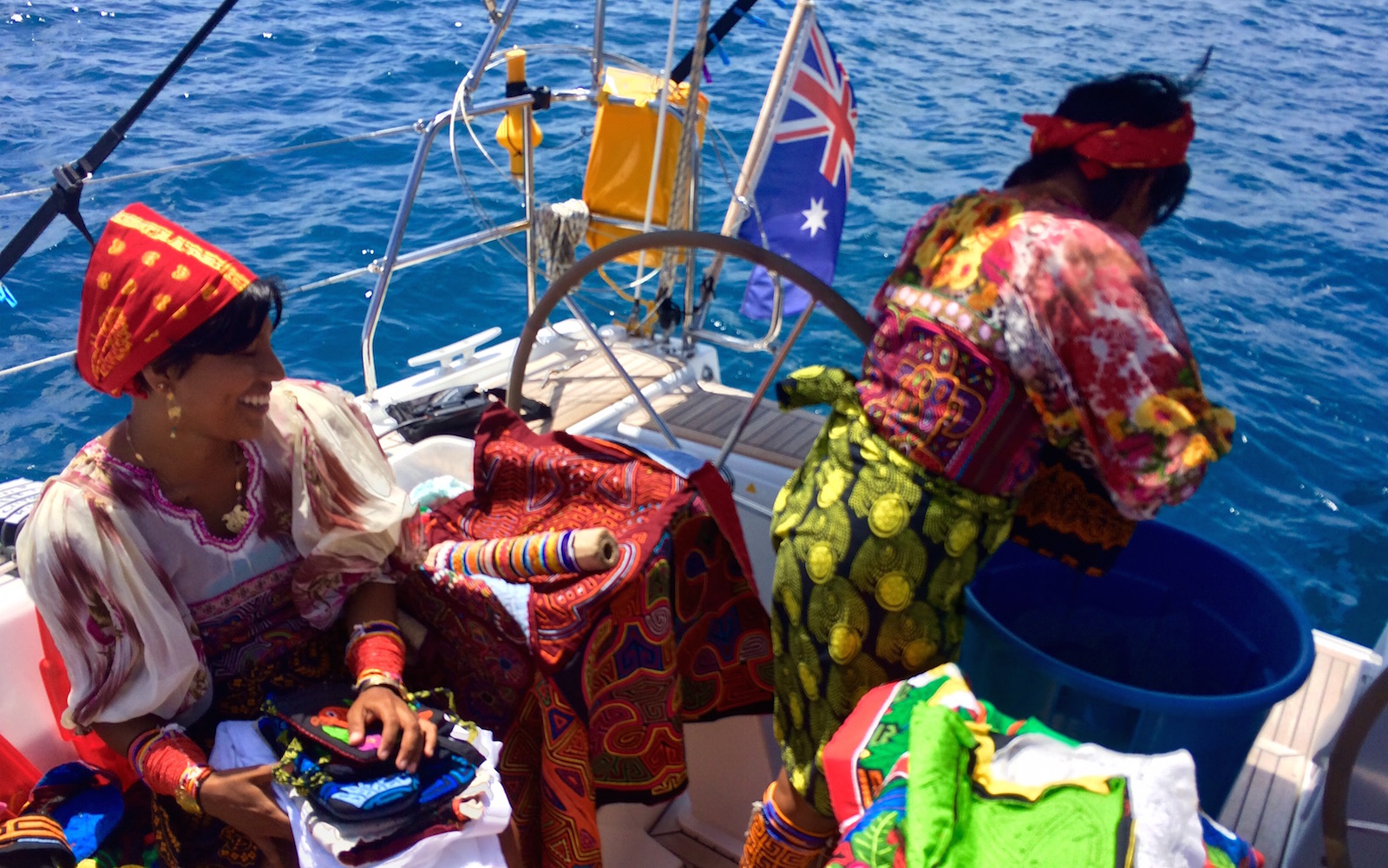 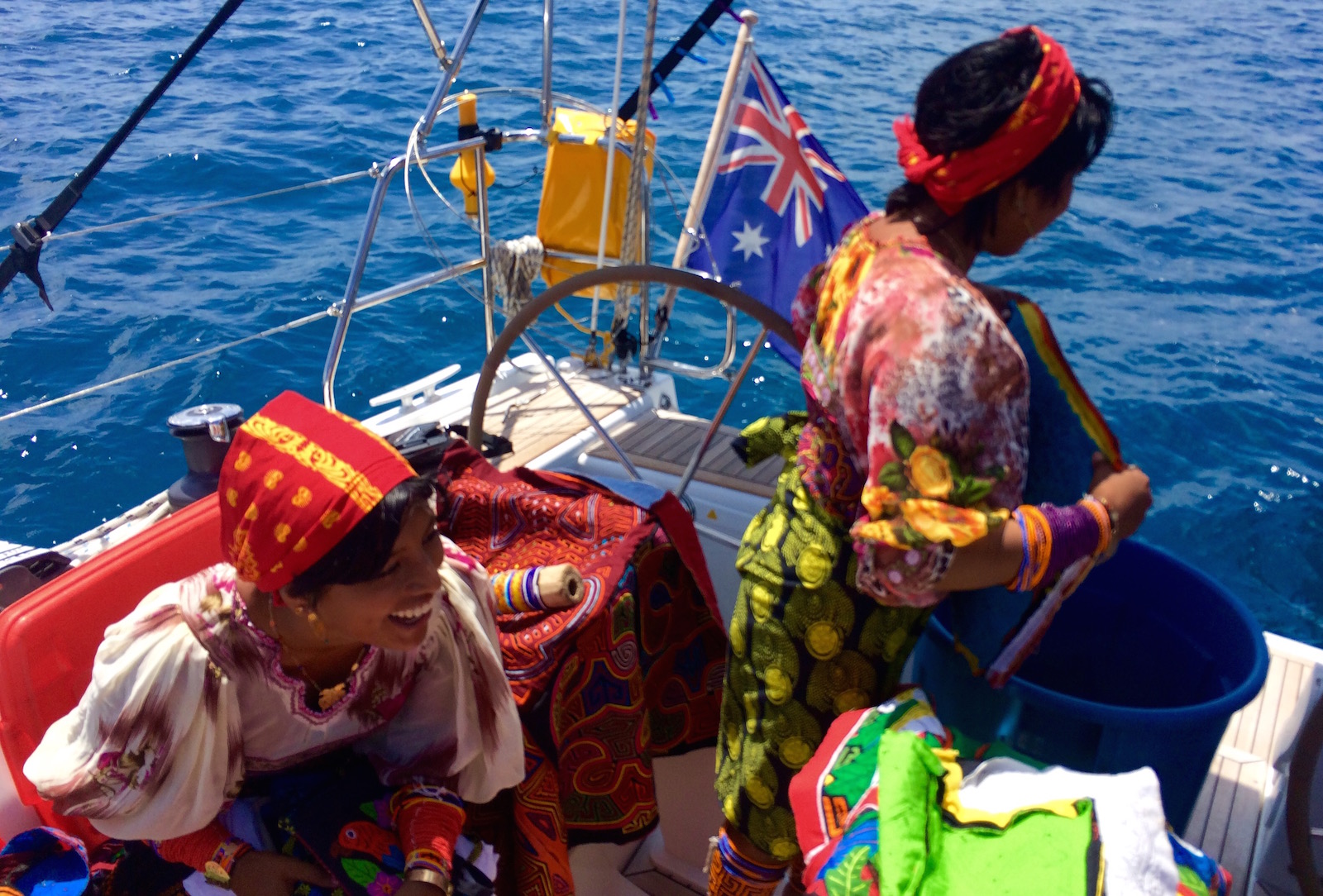 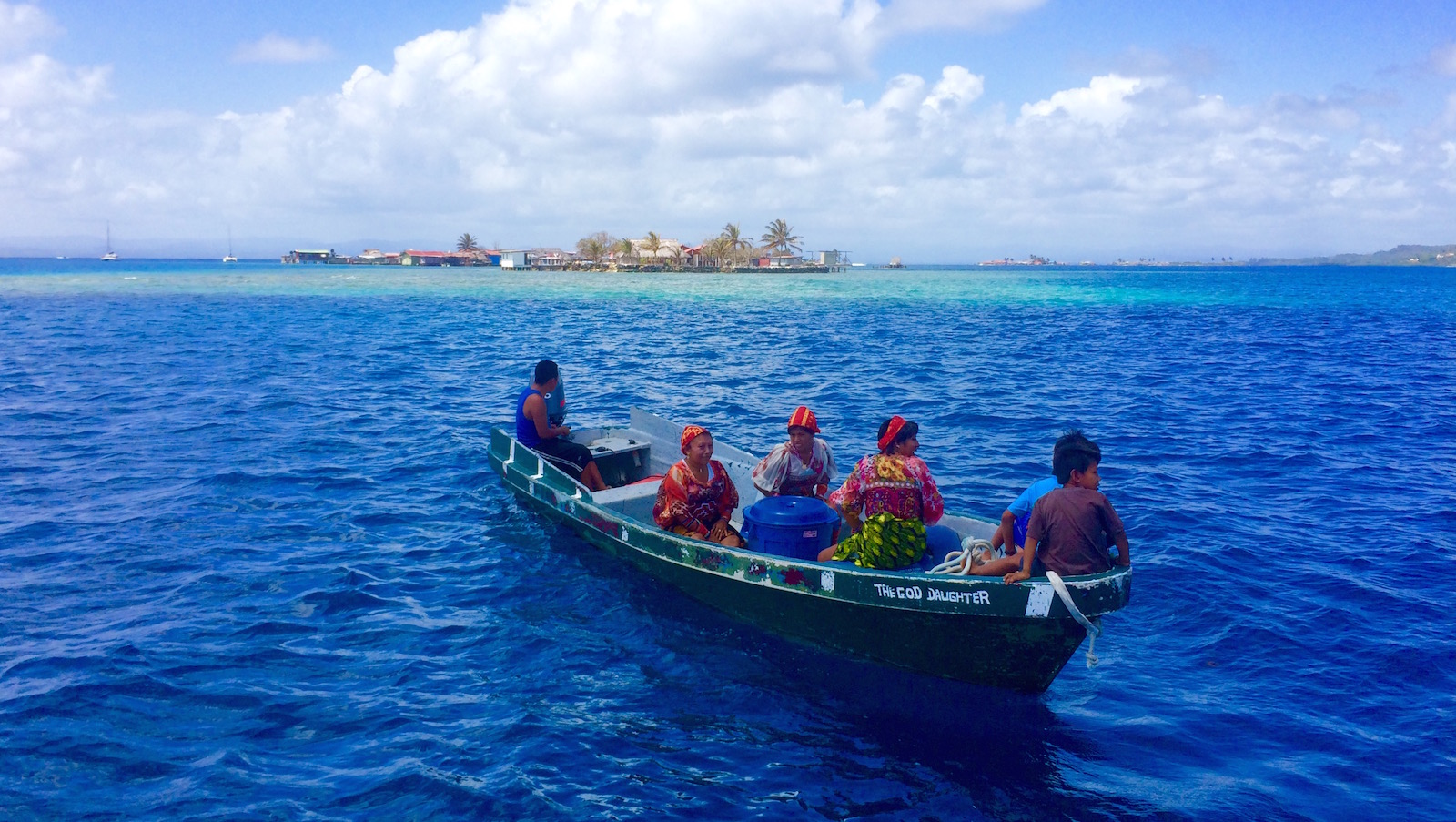 From there we nipped across to East Lemon Cays where we planned to stay the night. Again we carefully followed the waypoints and scanned the sea for reefs but made it in safely. We had updated our Navionic charts just before leaving Puerto Rico and I must say they were spot on despite all the reports.

This anchorage was beautiful, nestled between a cluster of islands and surrounded by reef it was not only stunning but as flat as a pancake. What a pleasant feeling after the rocky, rolly marina in Puerto Rico. 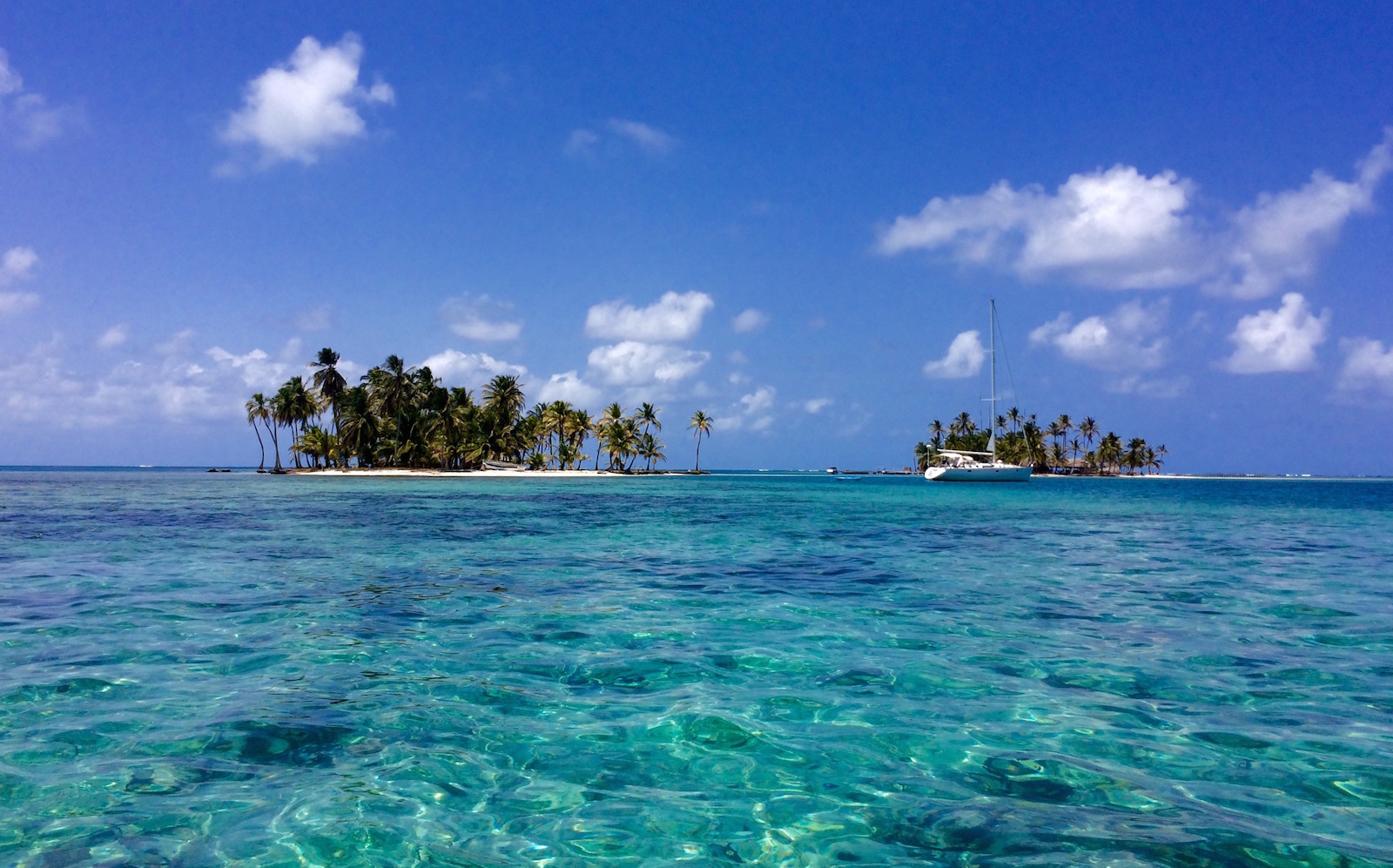 We were pretty beat after our crossing so we chilled out and watched the sun set over the palm-tree covered islands before crashing into bed for an early night. 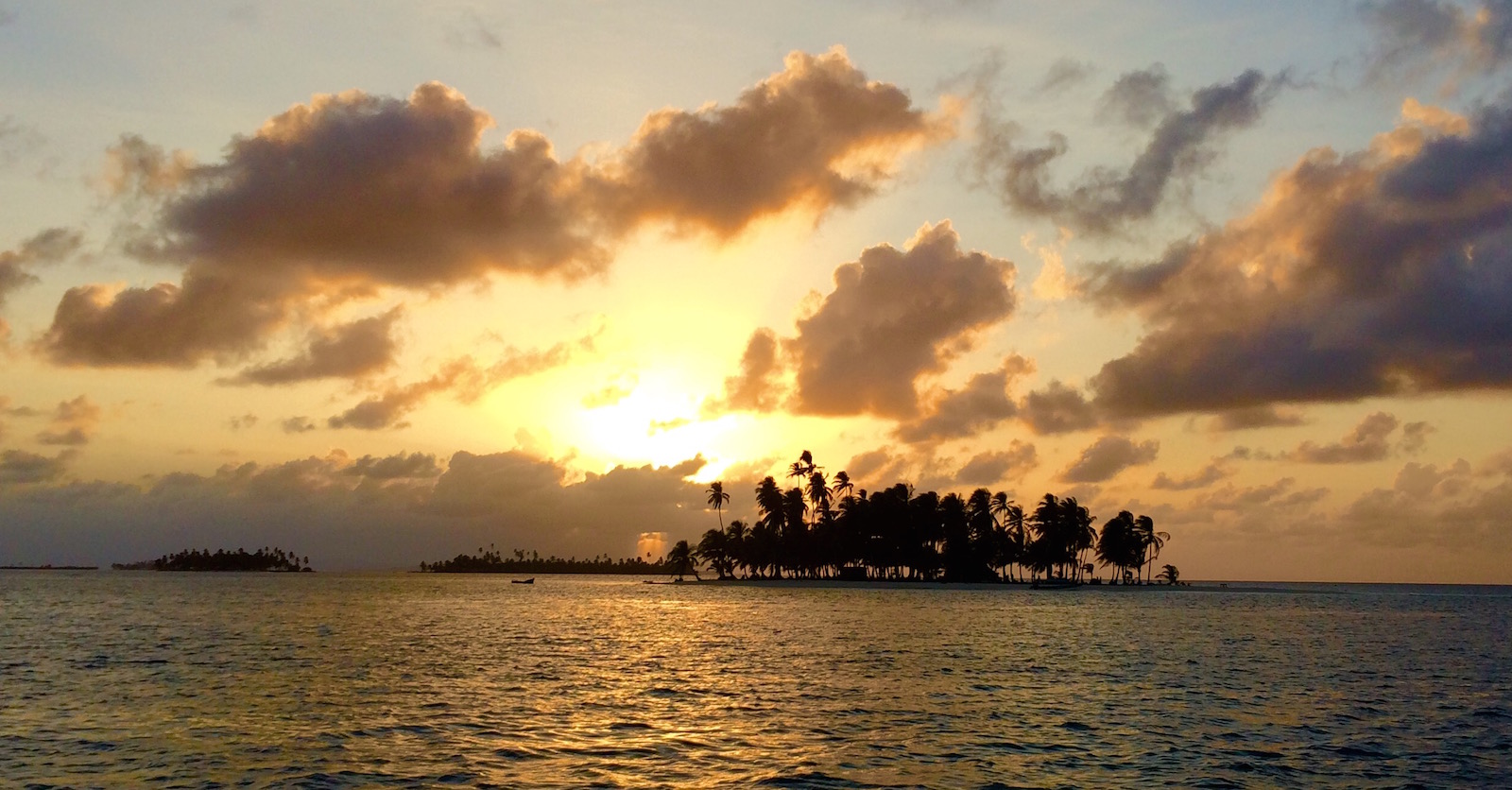 The next day we were up for some exploration. We dived into the crystal clear waters and had an amazing snorkel across the reef to the nearest island. We wandered around the edge taking in the views. 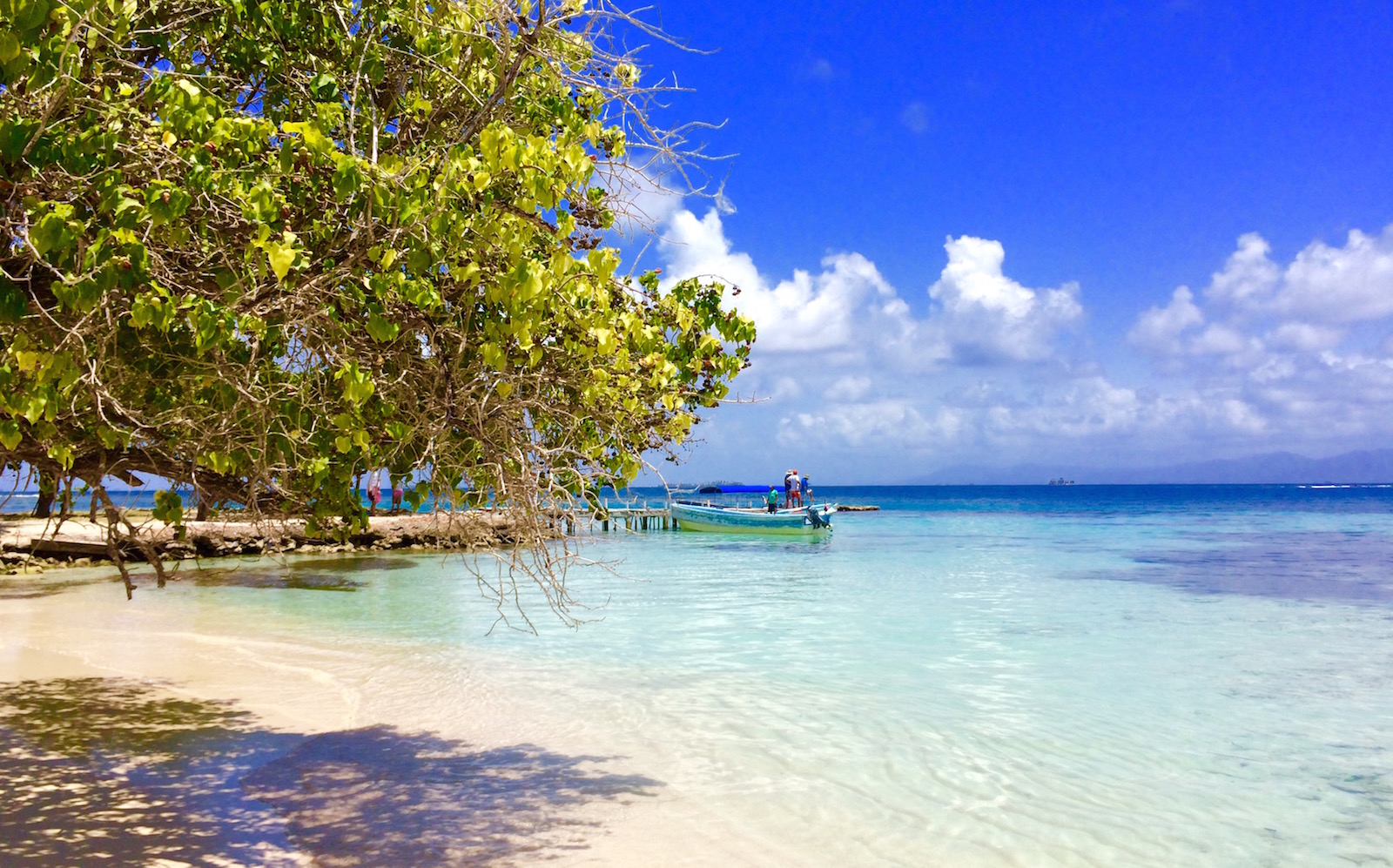 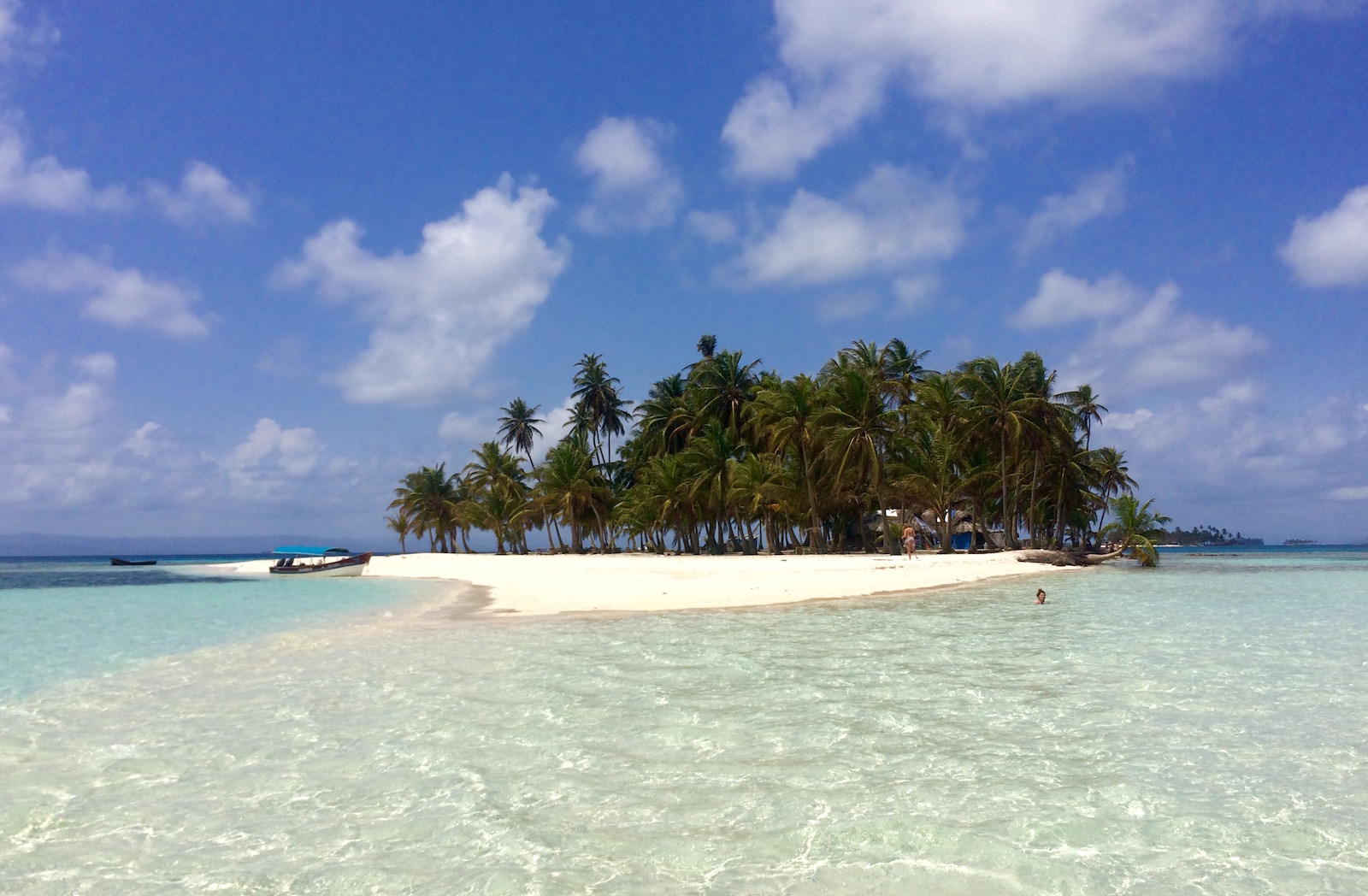 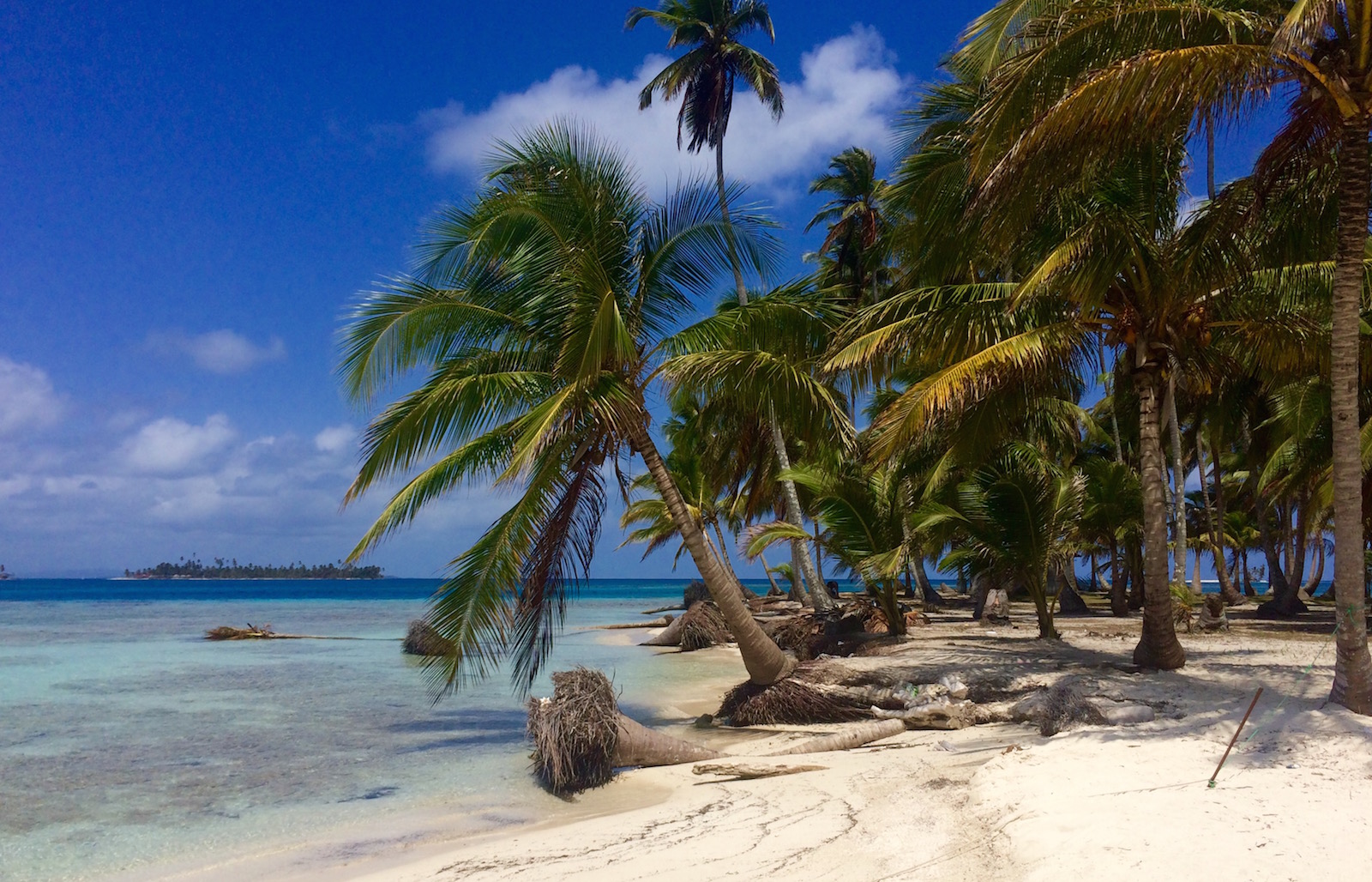 The islands are so tiny. We’d wandered about half-way around the island when I saw a Hanse just like ours. I pointed it out to Simon who laughed his head off. It was Interlude! I guess we’d walked further than I thought. After that it was a long swim against the current to get back. 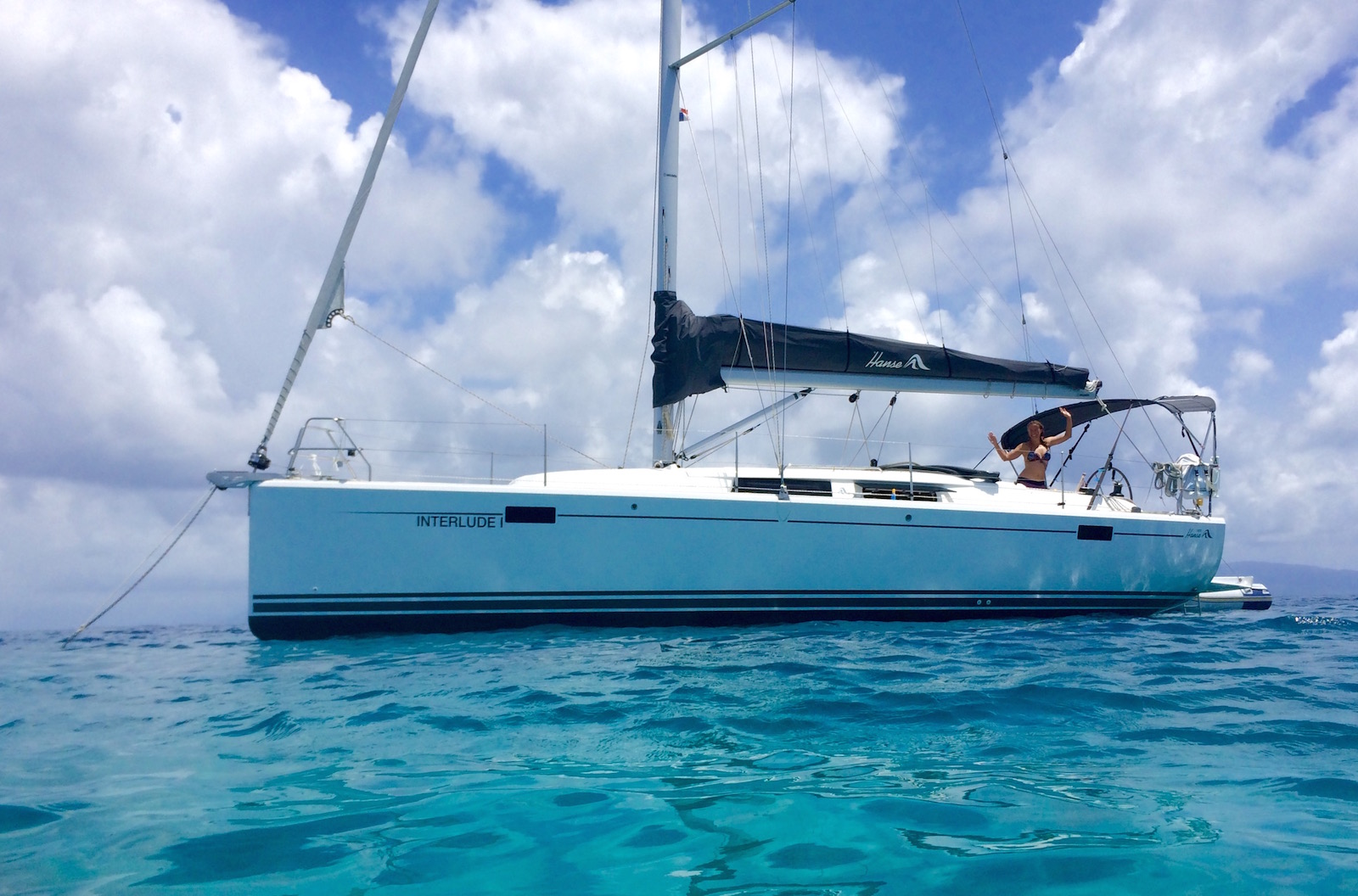 We had lunch and then decided to get the dinghy out to explore one of the other islands. This one even had a dinghy dock (in about 1 foot of water) which works well if you’re in a sturdy dug-out canoe but is a bit scarier in a inflatable, soft-bottomed dingy. 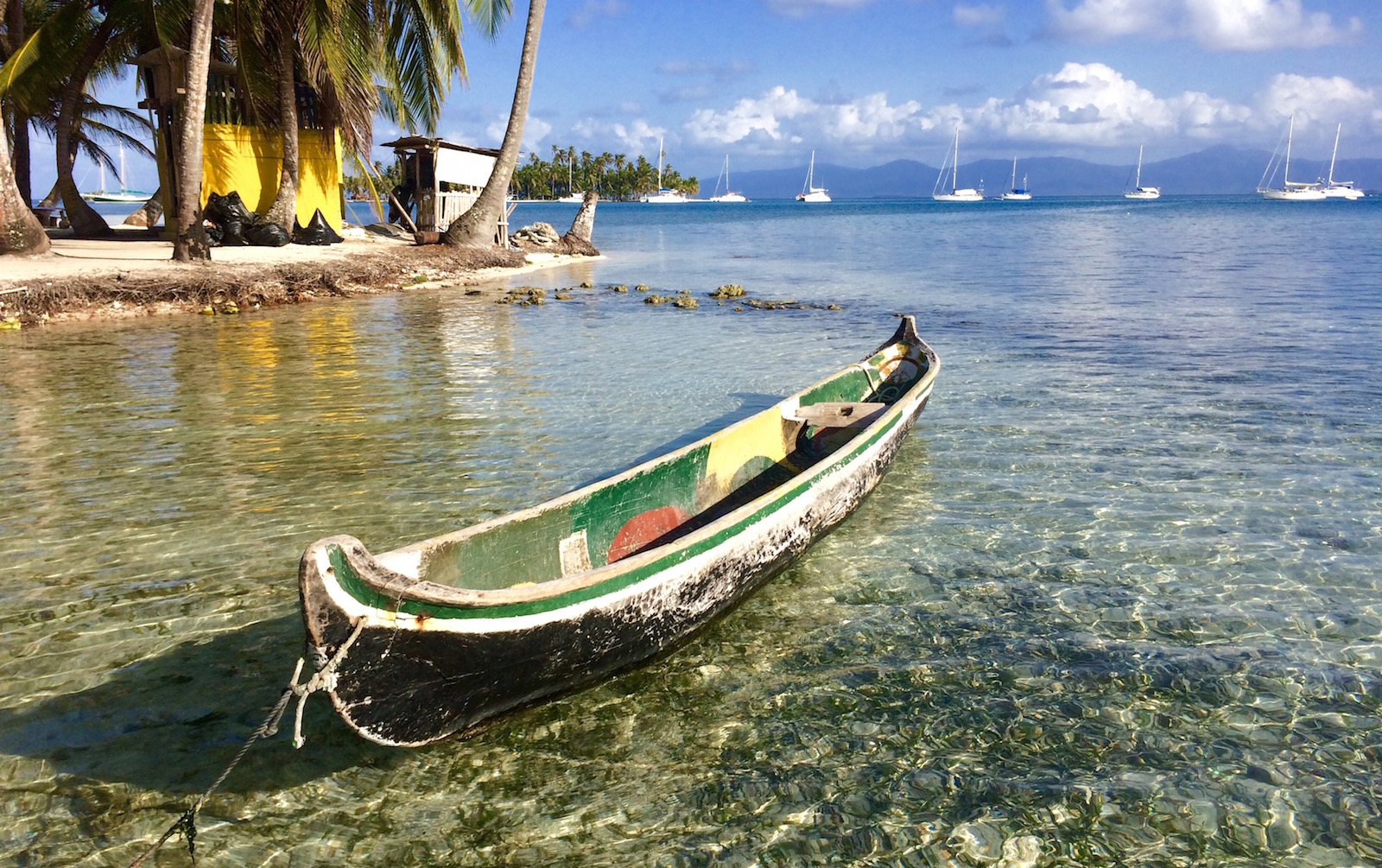 This island also had a bar! 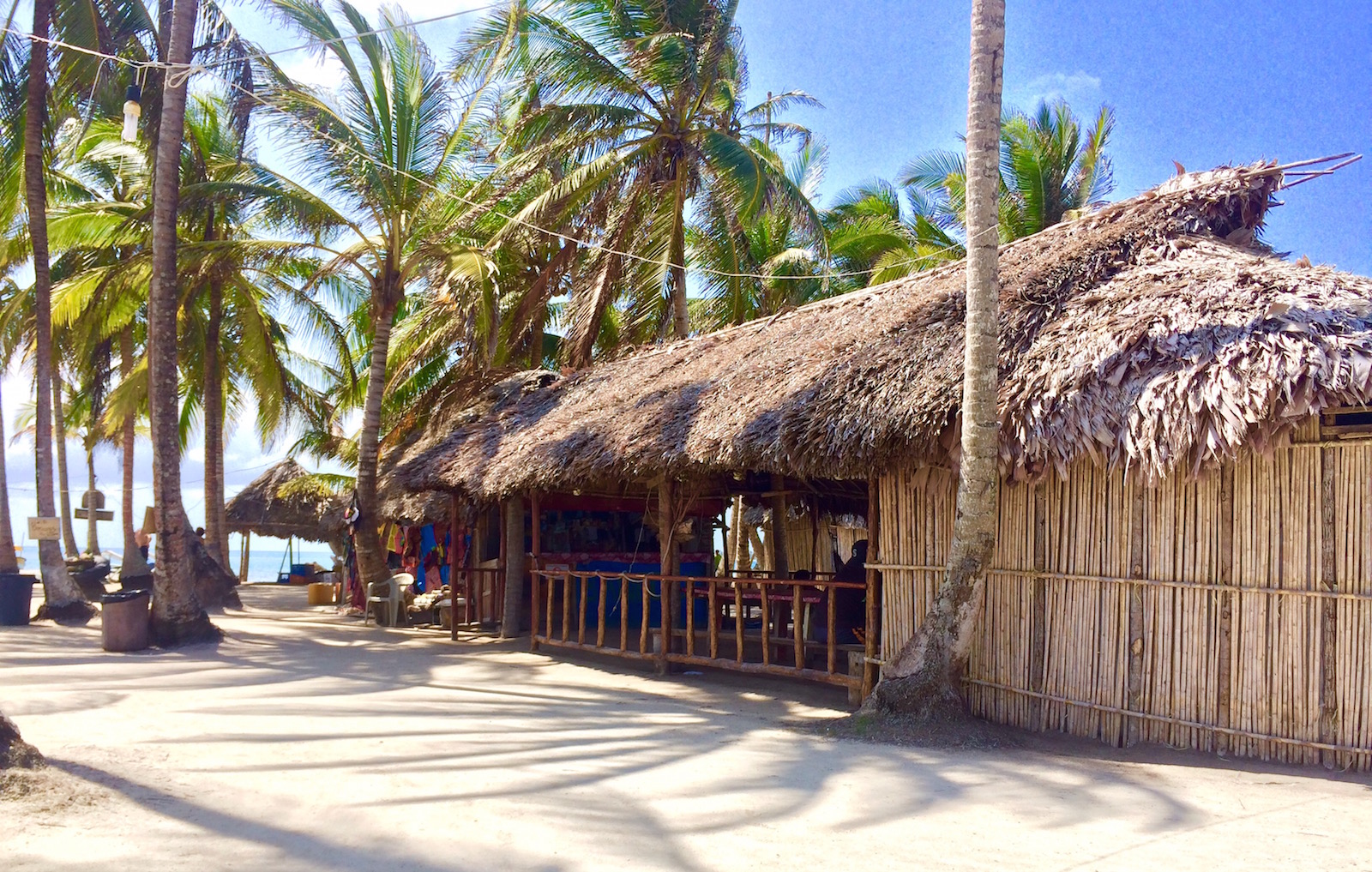 The drink selection was simple, a can of local beer (Balboa), a coke or a water. So we had a few beers and laid on the beach watching as one tour guide boat after another turned up bringing hippy-like backpackers too and fro. 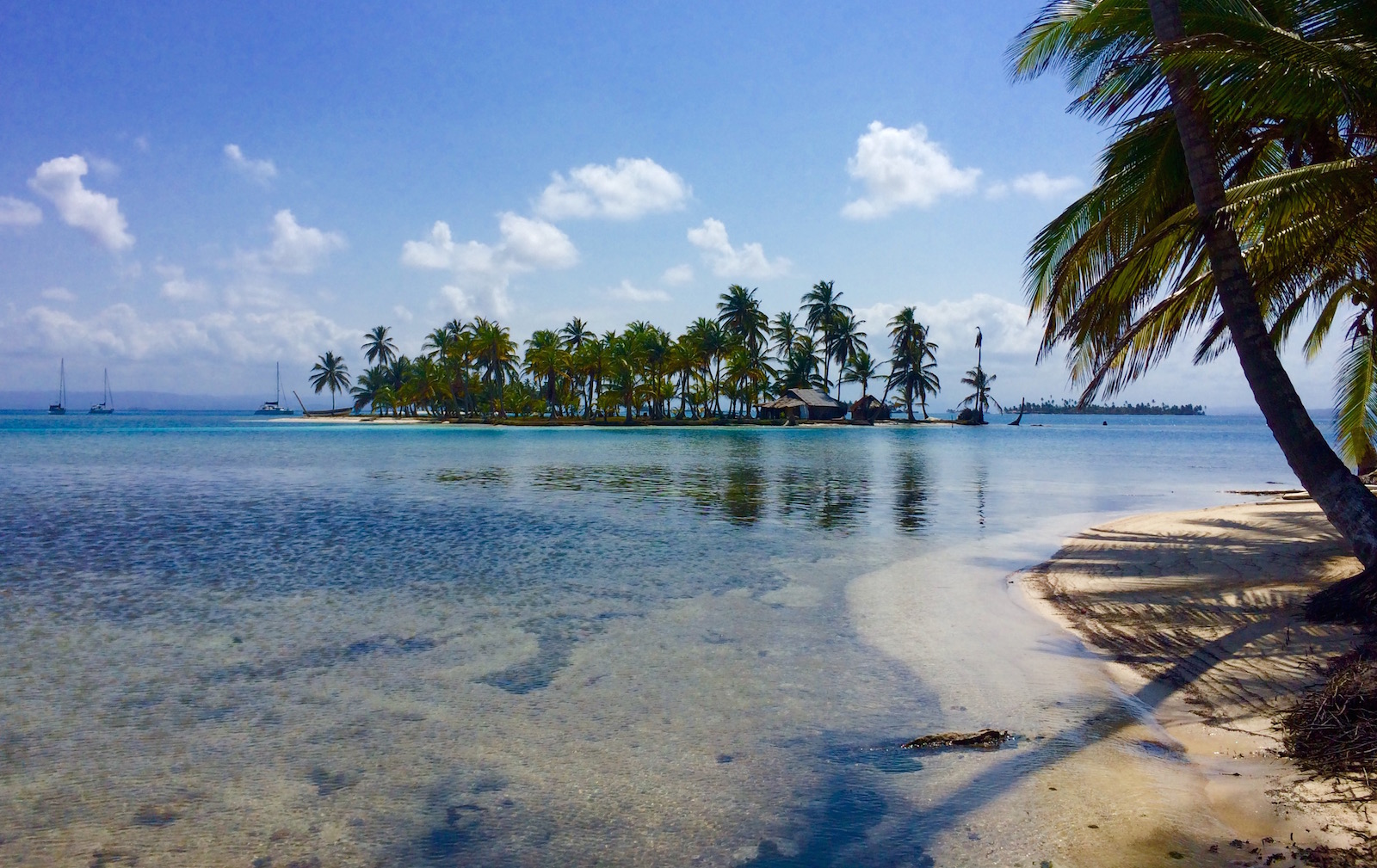 We had a paddle and found some amazing star-fish, saw a hermit crab, played some naughts and crosses and hangman in the sand, and generally lazed the day away. 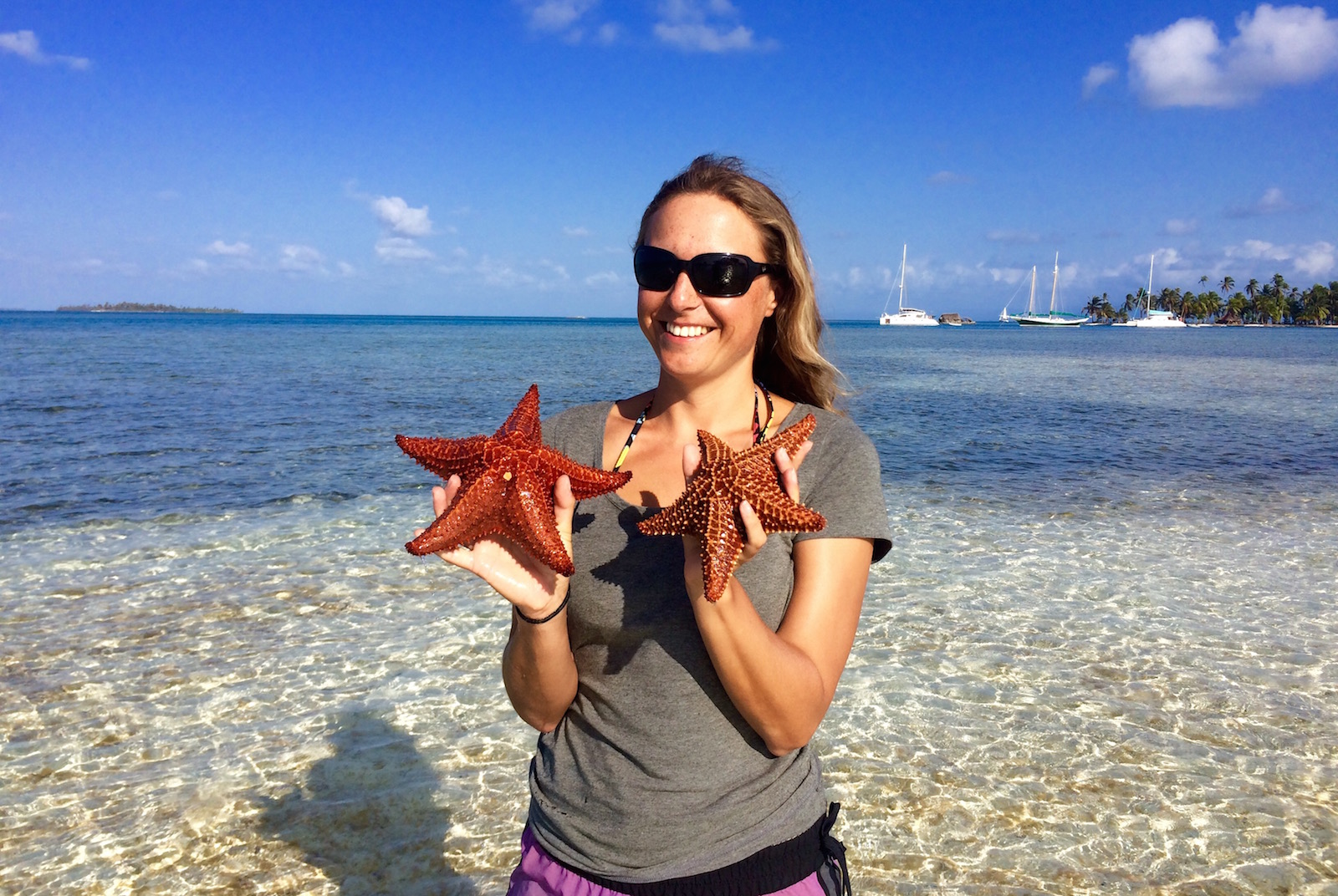 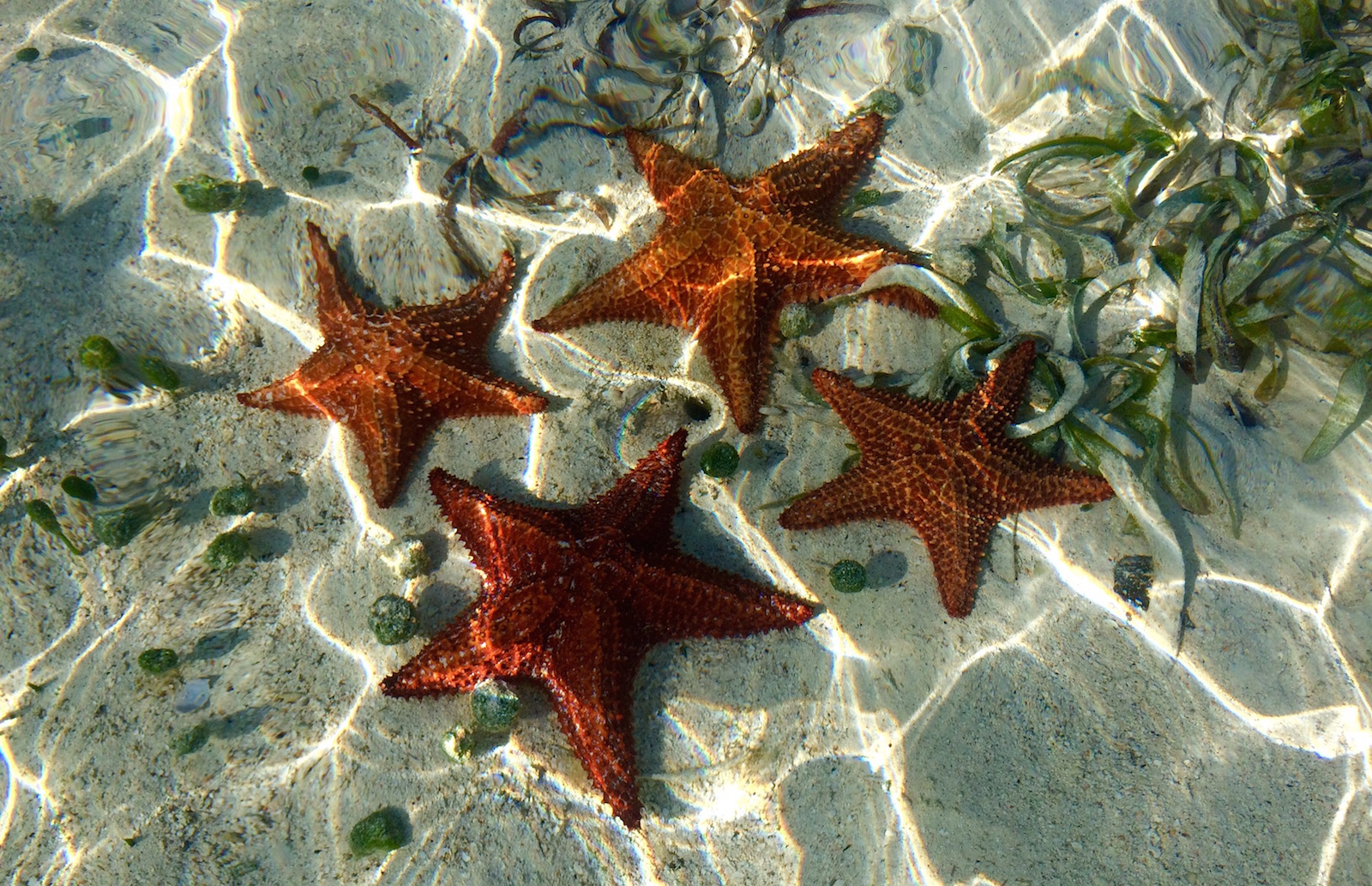 Back on the boat we were visited by Lisa, a local transvestite that’s known for the quality of her molars. I must say they look great so we bought a few more.

We were enjoying ourselves so much in East Lemons that we couldn’t be bothered to go anywhere else and decided to stay another day. Sometimes it’s all too easy to rush around from one place to the next in case we miss something, but that day we decided to stay put and take it all in.

The following day we decided to head to Dog Island. Some fellow Aussies, on a boat called Henri, got the jump on us so we followed them over. They’re heading to Panama then back to Oz in a few week’s time which makes us think we’re not leaving it too late. 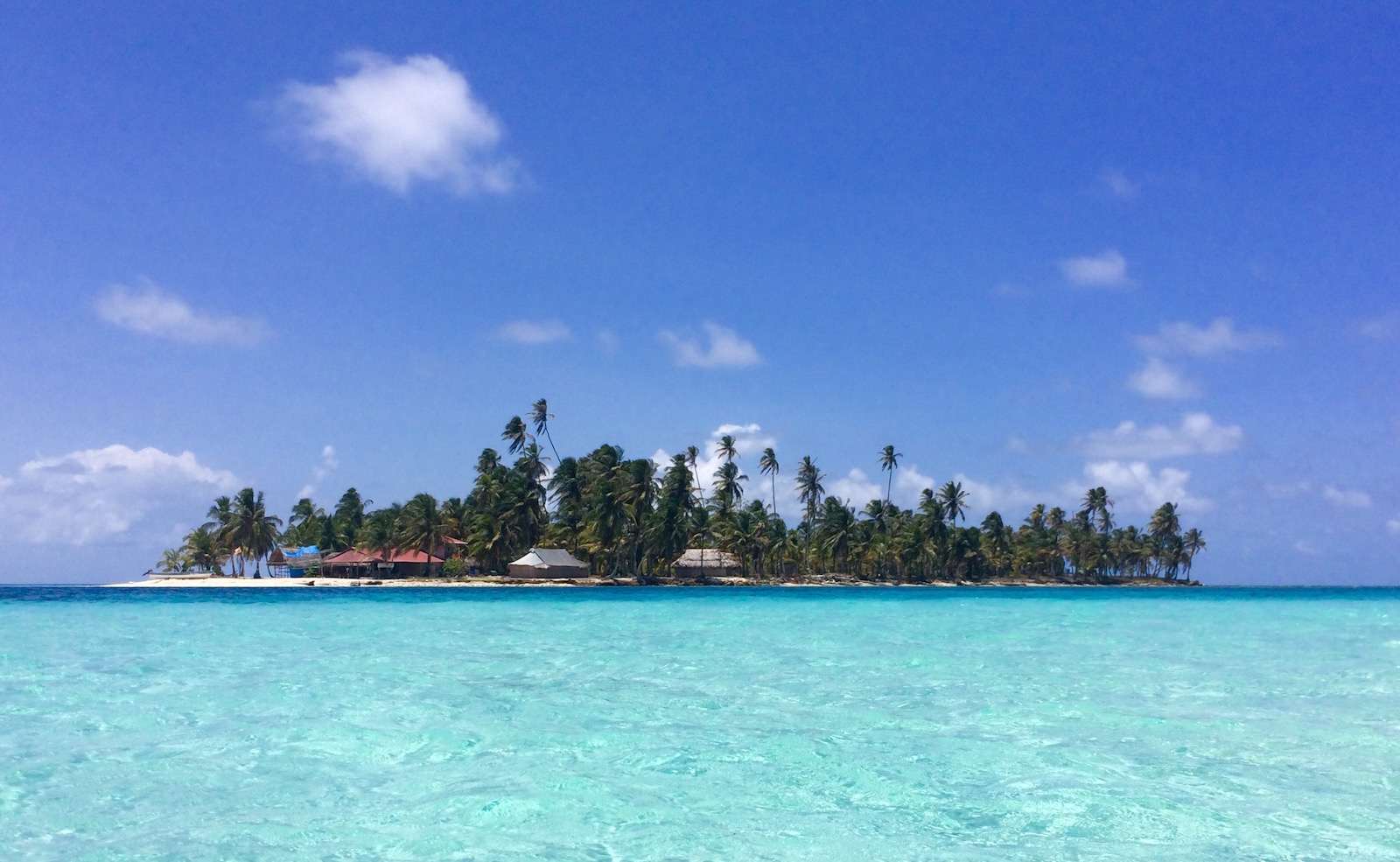 Followed the waypoints again, and again no problem with the electronic charts but using the waypoints from the guide also gave us a bit more confidence. Especially when you see the number of wrecks here. It seems like most reefs have at least one.

Anyway on Dog Island that’s what we’d come to see. A cargo ship had been wrecked here many years ago and now is home to hundreds of reef fish. We swam over, against the current again, and had a look around.

The wreck is conveniently located close to the beach and close to the surface making it perfect for snorkelling. Simon has purchased a new waterproof case for his iPhone so he was able to take some underwater, and above-water pics. 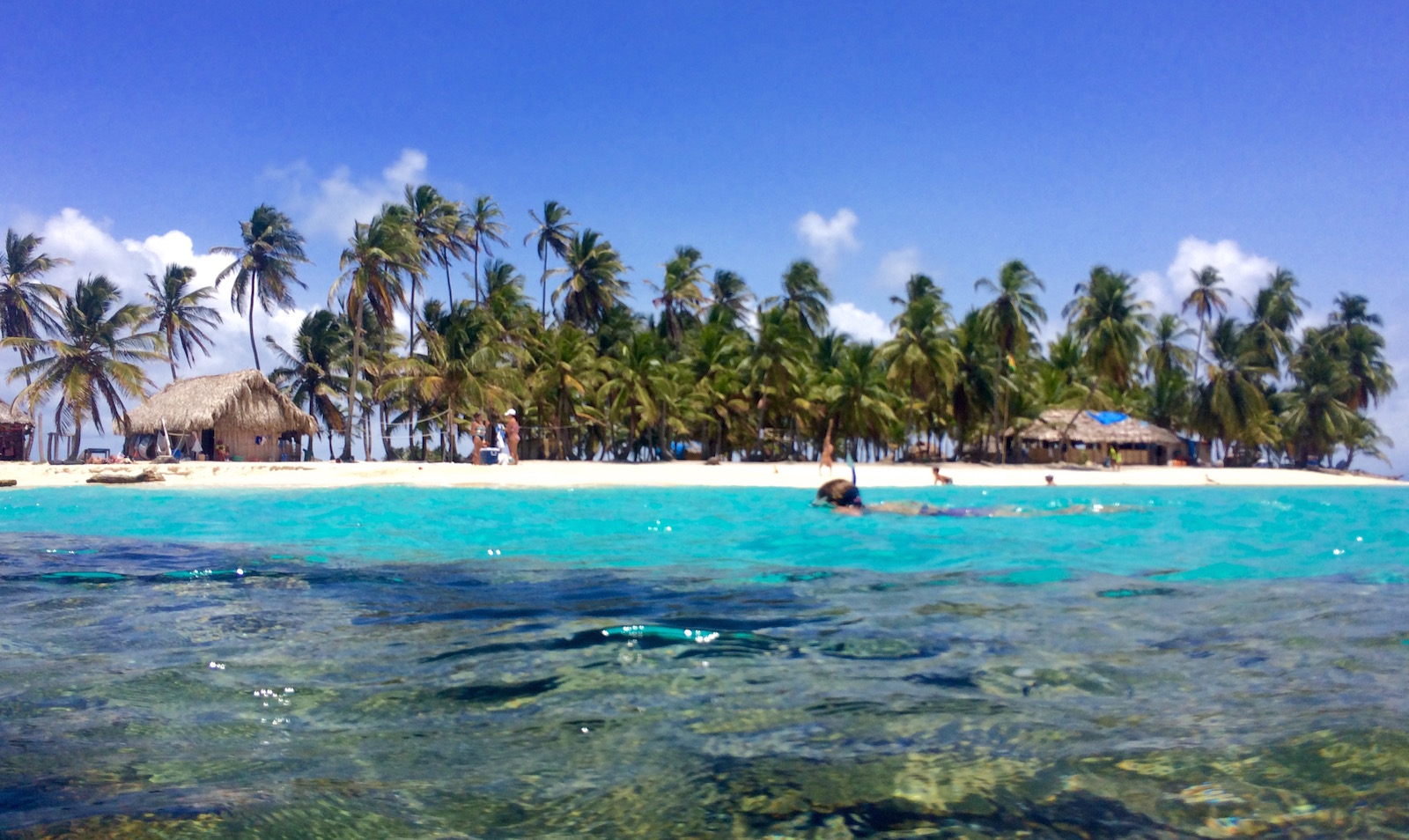 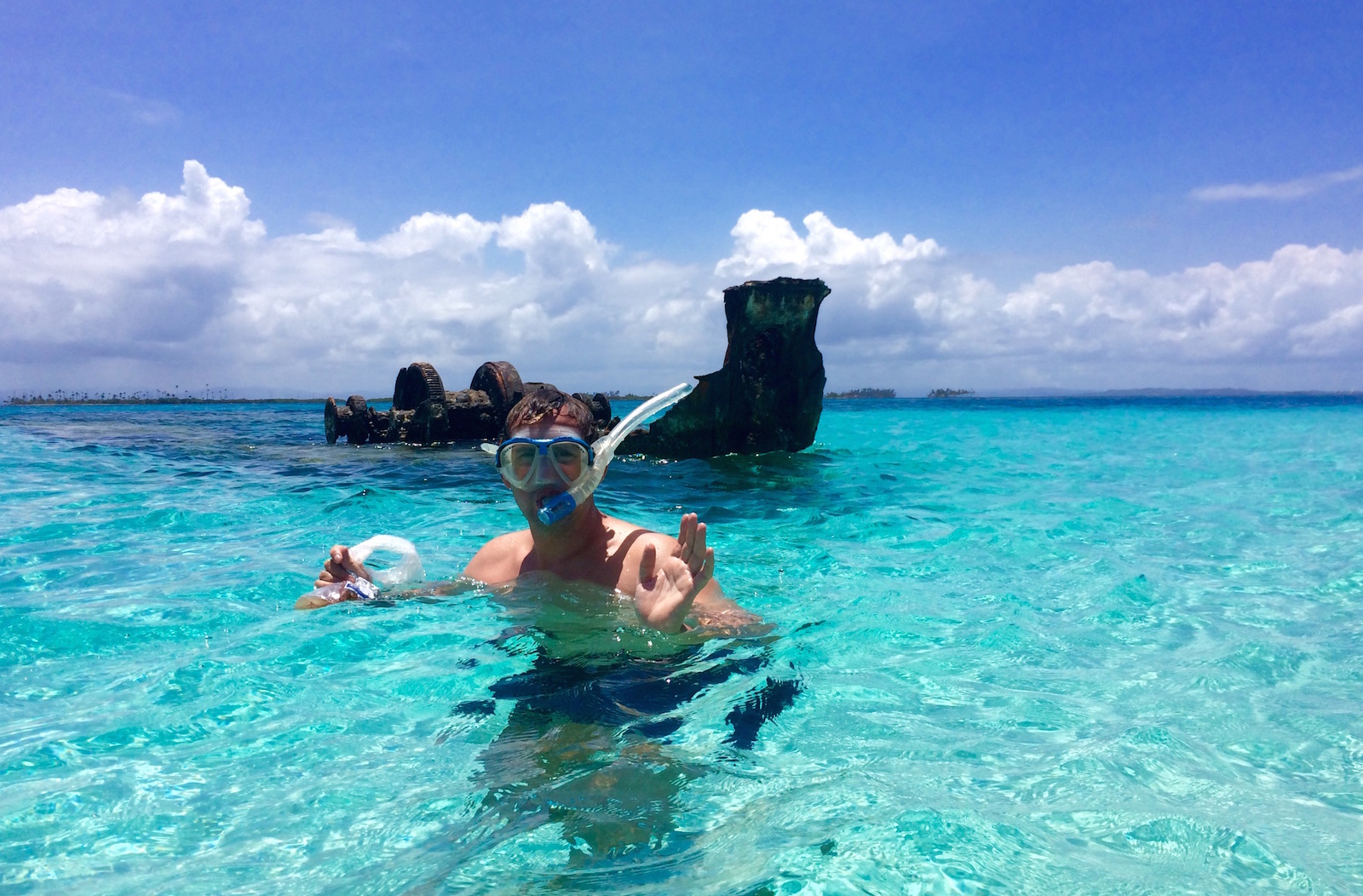 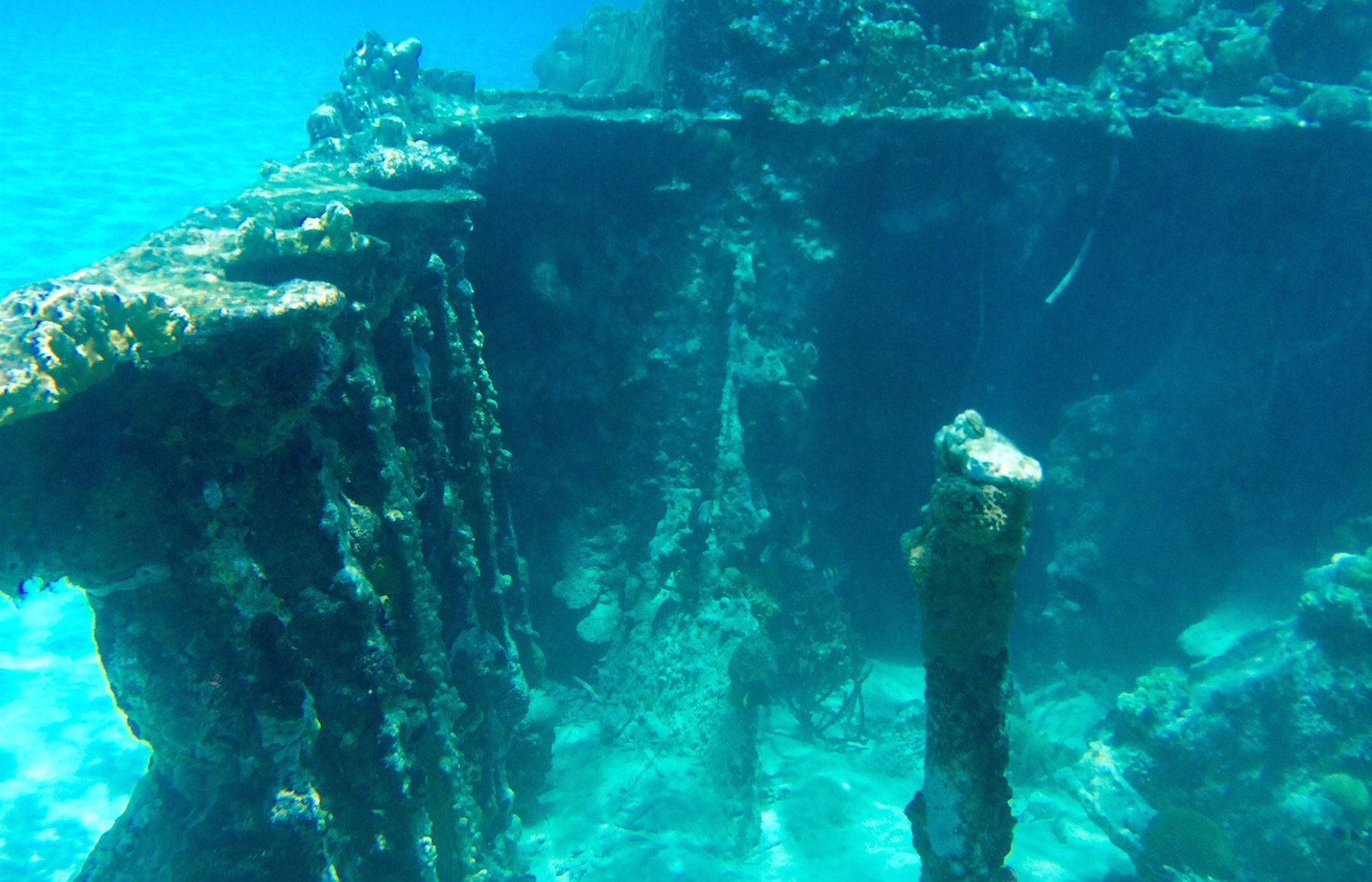 On Dog Island you can pick up a can of coke but not much more. These islands are really unspoiled – and these are the touristy ones! I think this is the most beautiful place we’ve been. A taste of paradise!

After that it was time to head back to Porvenir to clear out. Next stop Panama – yikes!