Two days in St Thomas is more than enough so we headed out to the Spanish virgin islands just close by. We cleared out of the US Virgins Islands and called the Spanish Virgin’s customs to give them advance notice of our arrival – according to the procedures. We were given another number to call when we arrived.

Culebra is said to be the easiest place to clear in and has a huge natural harbour ‘Ensenada Honda’ which is reported to be well-sheltered. As the weather is still a bit gnarly that sounded like a good bet.

It takes a bit of navigation to get into the harbour but once inside it’s quite open with lots of space to anchor. We chose a spot near the Dinghy Dock restaurant and settled in. We called up customs to check in but just got a voicemail so we left our details. As we weren’t allowed to go to shore until we were cleared, we had lunch onboard and waited…

After that we called a couple times more with no success. So we called the original number, and the guy there said to keep trying and if not we could visit them at the airport.

An hour later we were on the dinghy fighting with the elements again. We went to the El Batey dinghy dock, which is ever so slightly dilapidated, and then walked over to the airport. Once there we found that the immigration guys were out for lunch, so another wait… And then they didn’t really want us to clear in there so a few more phone calls… some more paperwork… and then finally we were cleared in! Just our cruising permit to pay for – what!?

It’s relatively simple if you follow the rules (just time-consuming and hard on the pocket). It’s not so simple if you don’t, like the poor guy in the office with us who had been turned away once already. Whoops.

After that it was time for sundowners so we headed to the dinghy dock restaurant. The restaurant gets busy, but luckily as we were there early we were able to bag a table and enjoy a scrumptious meal. A great end to a frustrating day. 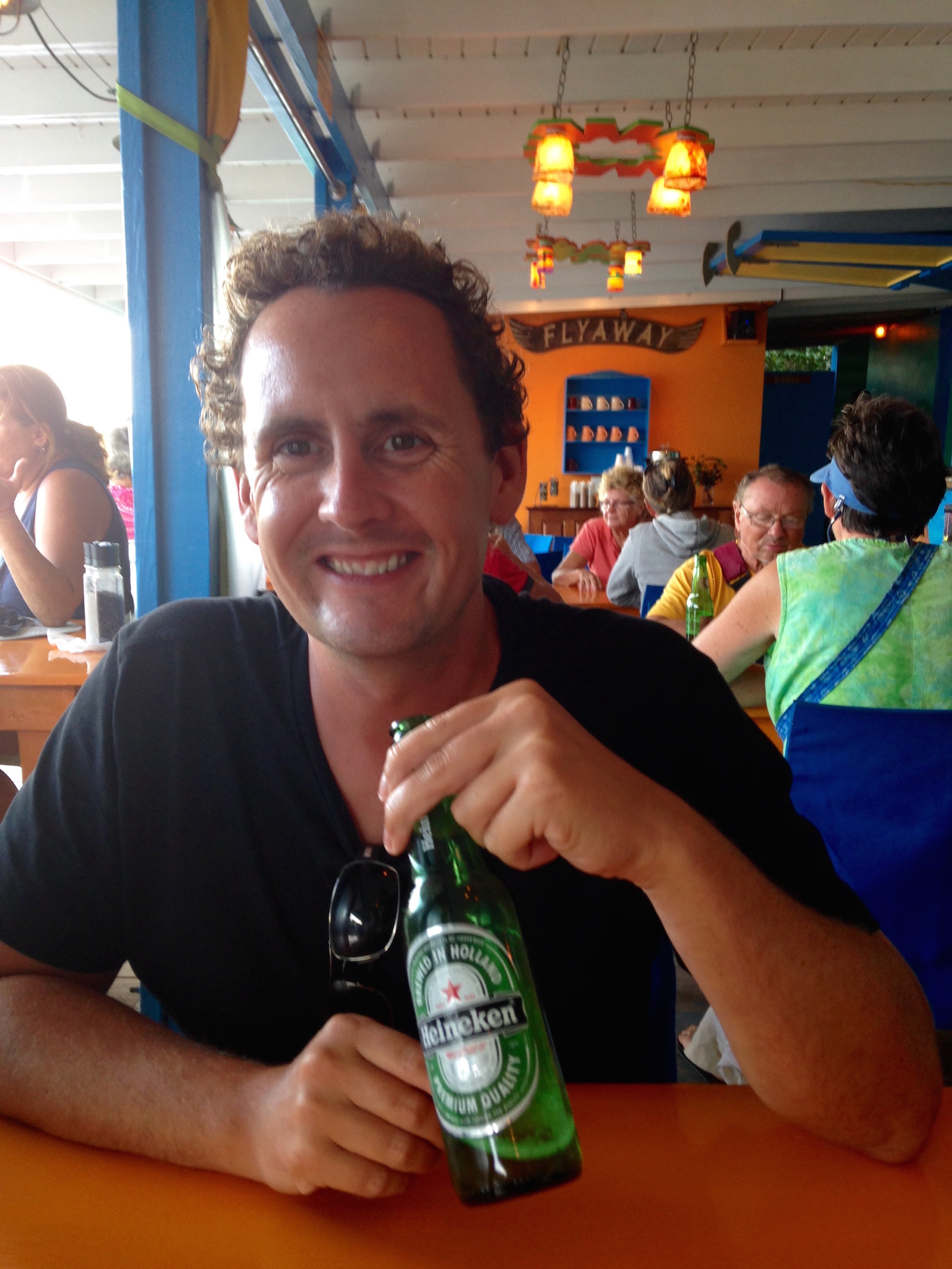 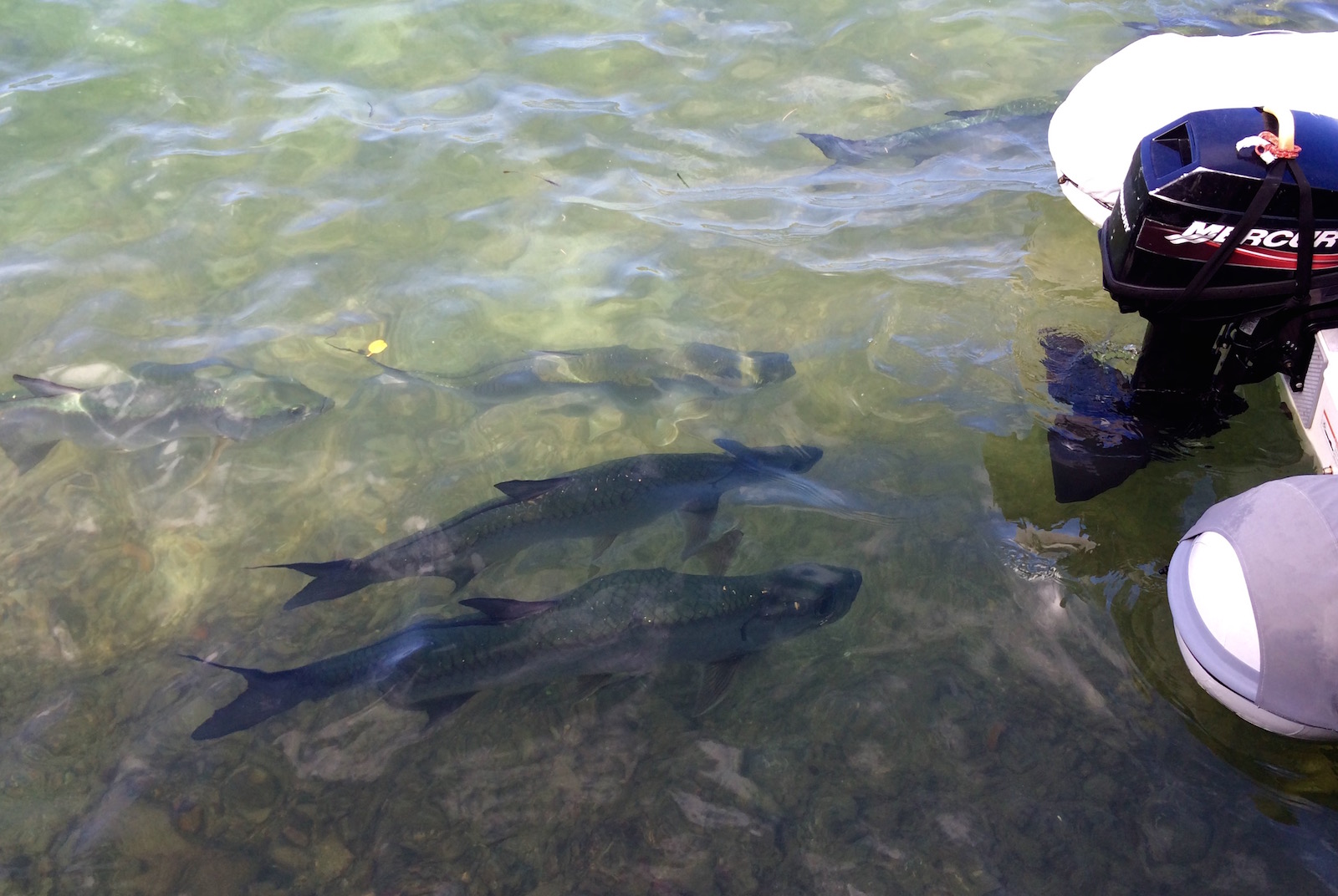 The weather really isn’t letting up here and the bay, being so wide, is not overly protected. We wanted to explore the island though but weren’t keen to brave the elements again with Interlude. Solution: Golf carts!

We dingied to shore, tried a few different dinghy docks, each with their unique challenges and then went to Carlos Jeeps and rented a golf cart. These things are so much fun. It’s much like Whacky races, I only wish I had a banana skin to throw out the back to scuttle the many other tourists hurtling around. 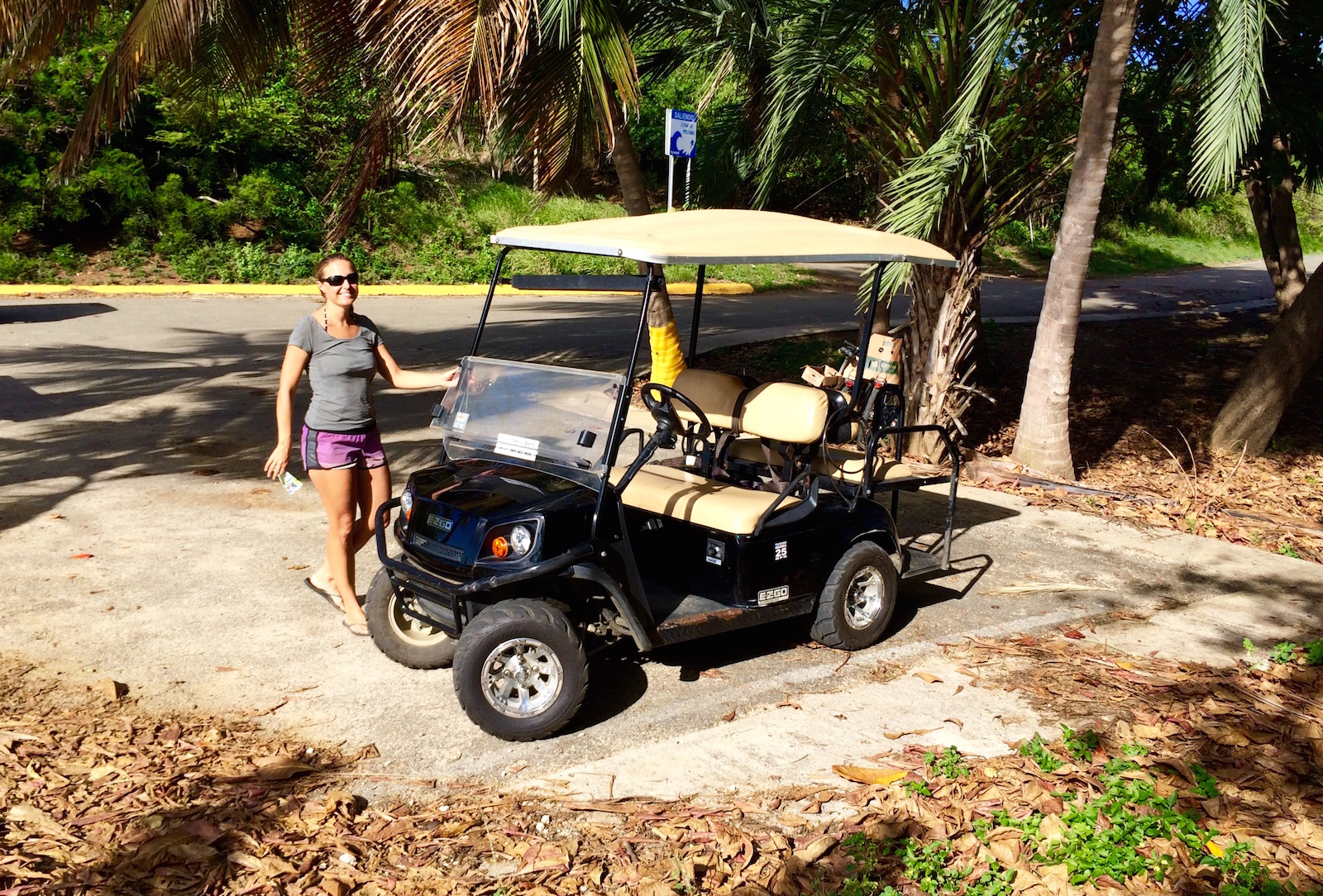 We got to visit many other beaches. The first, Flamenco Beach was beautiful but windy! We had a swim and then took off again. 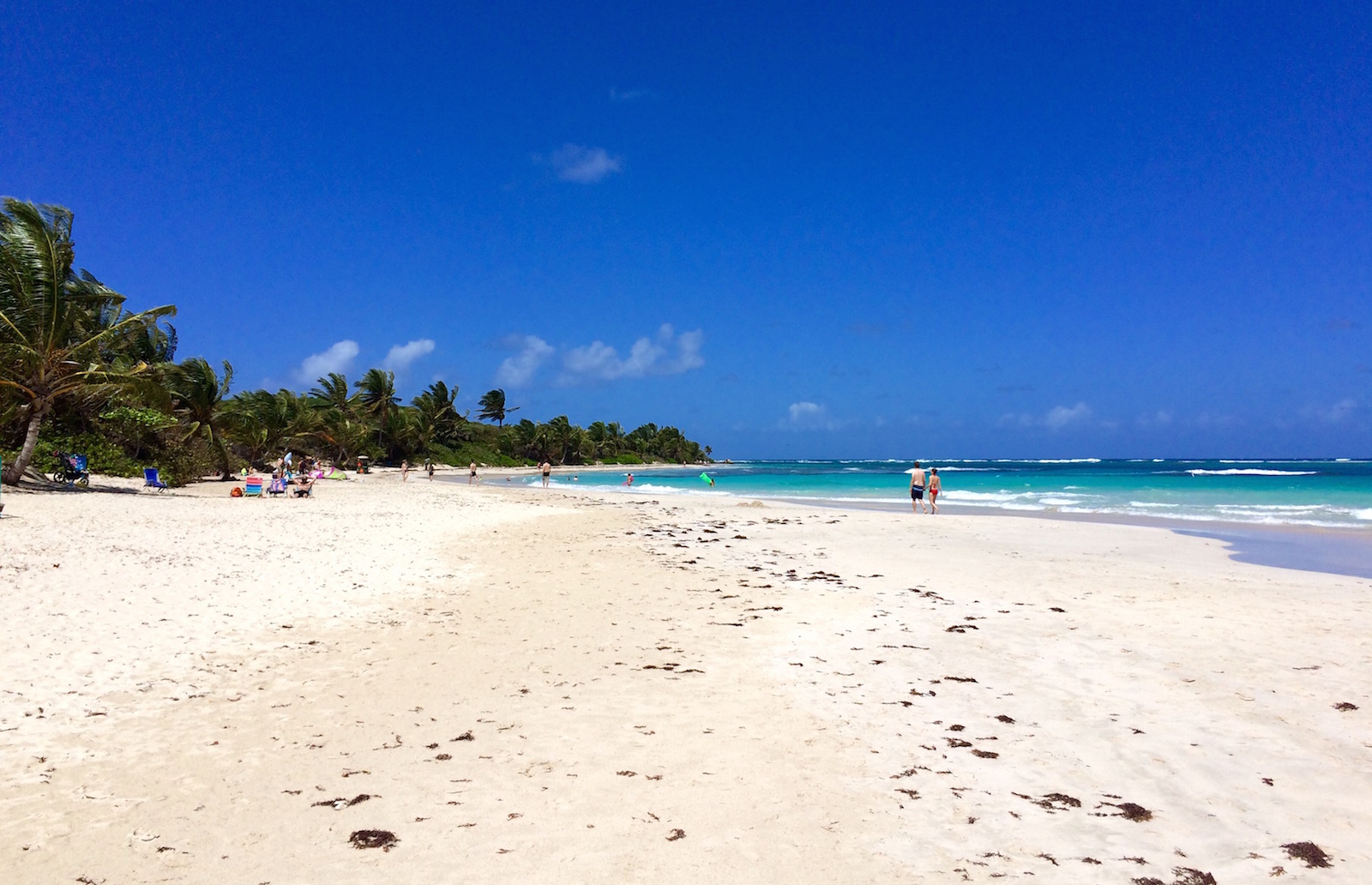 The second,Tamarindo, had amazing snorkelling. We saw turtles and a ray… and then a huge group of tourists with flippers turned up. So we upped and left again. 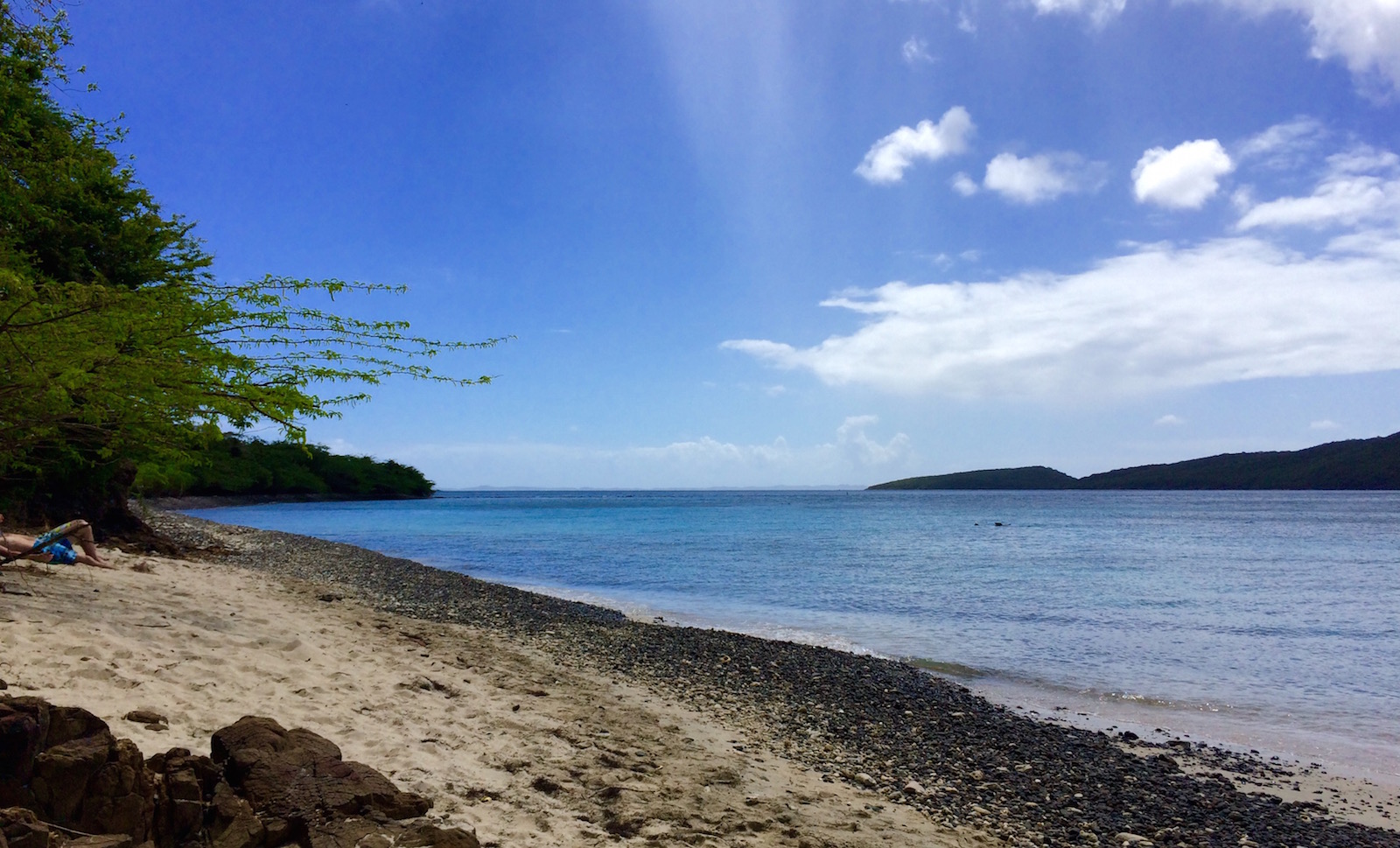 Then the third beach was down a dirt road so we had to leave our cart, with three others who were here. The beach was a bit mangrove-y, and desolate to the point of spookiness. We hot-footed it out of there back to where the cart was. The others were still there, we don’t hold out much hope for the folks who seemed to have been swallowed up by the quicksand on the beach.

And the final beach, Melones, had great snorkelling – this time for the amazing coral growing there, and some colourful fish too.

After that it was time for some sun-downers at Mamacita’s followed by amazing Mexican at Zaco’s Tacos. 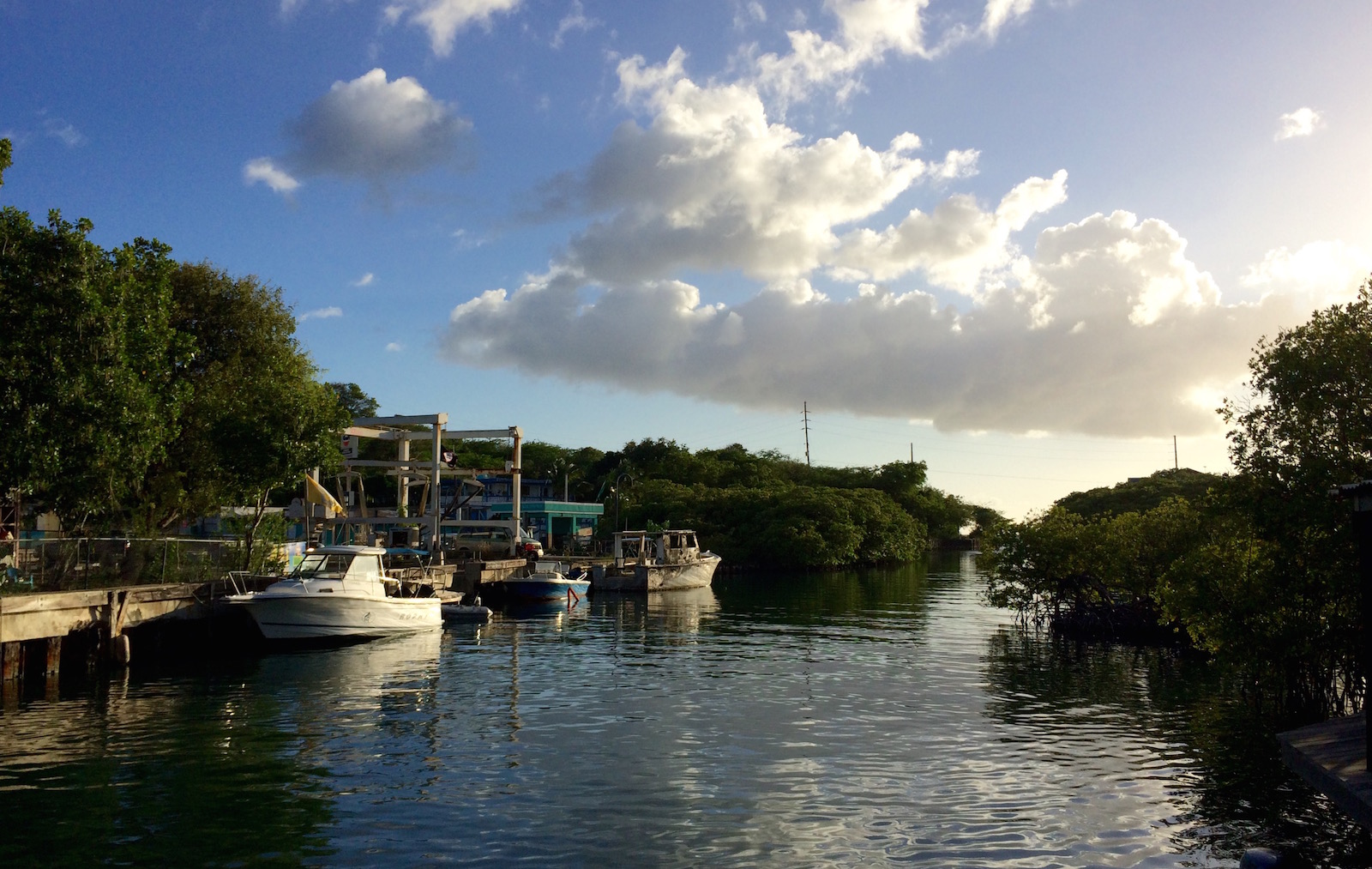 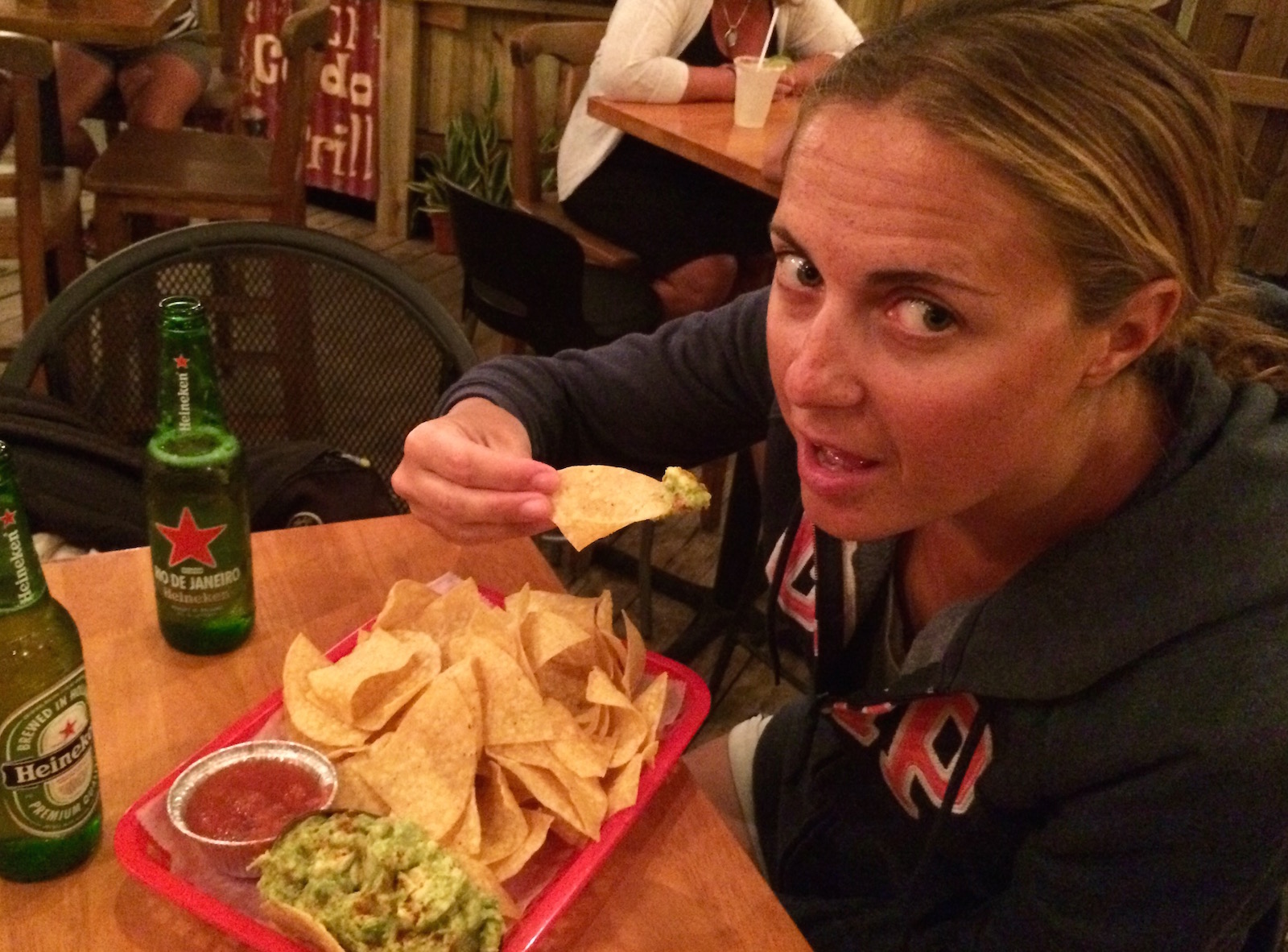 Culebra was amazing but we were tired of the wind in the bay so we decided to head to Vieques in search of a more sheltered spot. It was a bit hairy with some big seas and rainy squalls. So I hid downstairs to ‘monitor the watermaker’ and left the captain to it! Ha! Actually it was a bit queasy downstairs so I’m not sure who got the last laugh.

We were headed for Sun Bay where the guidebook says there are ‘many buoys’ but as it happens there were none. There was just a solo cat braving the swell. So we continued down the coast and decided to poke our noses into Ferros Bay and Mosquito Bay where there should be buoys just outside. Nope!

But we sighted some masts in the next bay so trundled in there and captured one of the few buoys there with great relief as yet another squall hit. We had landed just near the small town of Esperanza. Chase, one of the ex-pats there, welcomed us in and explained how the holding was bad for anchoring so we were lucky we’d got the newest buoy. The official ones had been removed some time ago. Anyway we were settled.

We got the full low-down on the place and wandered into town to explore, ending up at Lazy Jacks. 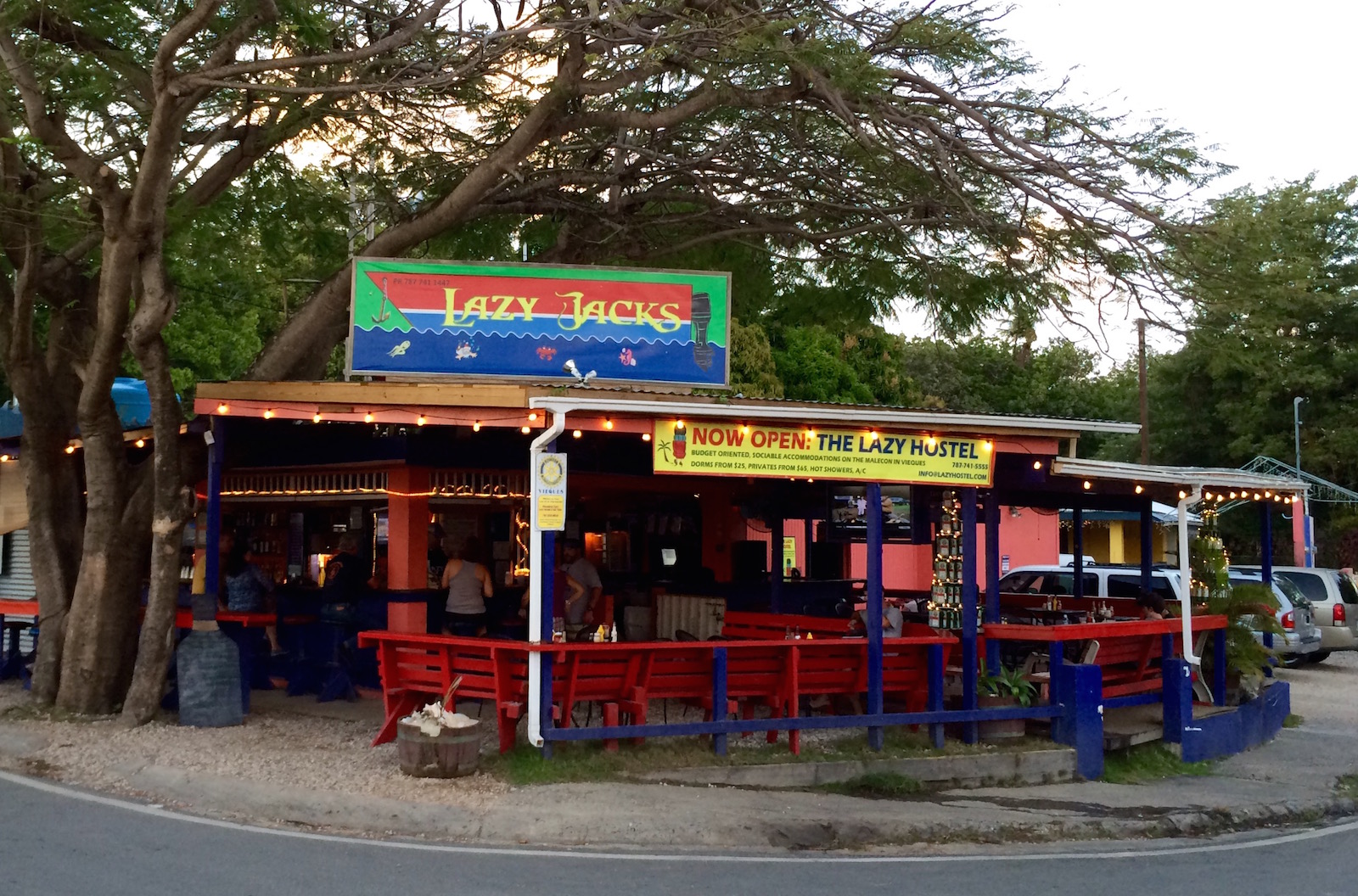 It seems like a laid-back town. Well apart from the punch-up that had the Americans ducking and hiding. Apparently punch-ups can often lead to shootings – at least here. So that just left us English folks at the bar ready for the crossfire. Hopefully that’s just an isolated incident and it seemed to get resolved pretty quickly.

Next day we were the lazy jacks. We went ashore to try and book a trip to Bio Bay but as it was full moon we couldn’t do that for another day or two. We visited the corner store and then just had a relaxed day on the boat.

Well so we thought. There we were just minding our own business when I saw a boat outside the window, and I shouted to Simon that the ‘boat was awfully close’. We ran upstairs thinking that it was the usual charter boat out of control only to find that this time it was worse. A boat had come loose from it’s mooring and was floating down the bay with two men in dinghies chasing after it. If they hadn’t have been there to push it away it would have totally smacked into us so we were really lucky. The guys managed to run it down and motor it back to another mooring. The funny thing is we don’t think the guy on the boat even realised it had moved when he returned! The problem was that it was moored by the mechanic who only put one line on. In the big winds and current it had completely chaffed through. We always tie on with two or even three lines and won’t be changing that anytime soon.

After that bit of excitement it was back to Lazy Jacks for a beer. We met an amazing guy with an awesome dog. The guy’s job is to clear up the undetonated bombs that litter the islands. There are places where you shouldn’t drop your anchor and shouldn’t go ashore. Anyway Coco the dog, eventually pushed us out of the bar so we took our pizza back to the boat.

The next day we waited for 8pm with much anticipation as we were going to do the Bio Bay. We were picked up at the ‘Green Store’ by a man in a van. We crammed inside the cab while the others took a seat out the back of the truck and we enjoyed an uncomfortable ride up to the bay. Then we were loaded two-by-two into kayaks and sent out on the lake.

We’ve seen a little bioluminescence before, out of the back of the boat at night. But here in the bay, it’s the greatest concentration in the world!

Every time you dip your oar the water lights up behind, a little like a light sabre. You can also see the trails of fish (and sometimes sharks!) as they dart off away from you. The tour guide showed us the birds, crabs and oysters that live in the mangroves too.

It was amazing to see but it wasn’t long until the moon came up and the effect was reduced. Glad we got the early booking.

So then we were just left people watching. A Japanese couple seemed to have no co-ordination and just kept powering into people. They hit us a few times and it was hard to avoid them as they were steaming ahead and changing course haphazardly. Was pretty funny when the caught people unawares.

After that it was just a quick trip back to town and then back to the boat to prepare for our trip to Puerto Rico. Can’t wait!!

One thought on “Spanish Virgin Islands”