We had to keep pushing on, that clock is always ticking, and we’re always keen to make up our own minds, but we had two issues.

We’d long come to the conclusion that if we waited for Mother Nature we’d be waiting a long time, so we decided to concentrate on issue two, getting our US visa.

The information on Noonsite was great although we didn’t like what we heard. First things first we had to get our passports stamped and for that we had to go to the USVI’s without poor Interlude. We headed to Sopers Hole (aka West End) Tortolla, picked up the dodgiest looking mooring, rowed the dingy to the dock and just made the ferry after paying a departure tax.

The ferry screamed along to Cruz Bay without any regard to the wind, waves, or the poor yachtsmen coming the other way, tossing them around in it’s wake. Kind of funny if it weren’t for the fact it would probably be us tomorrow. 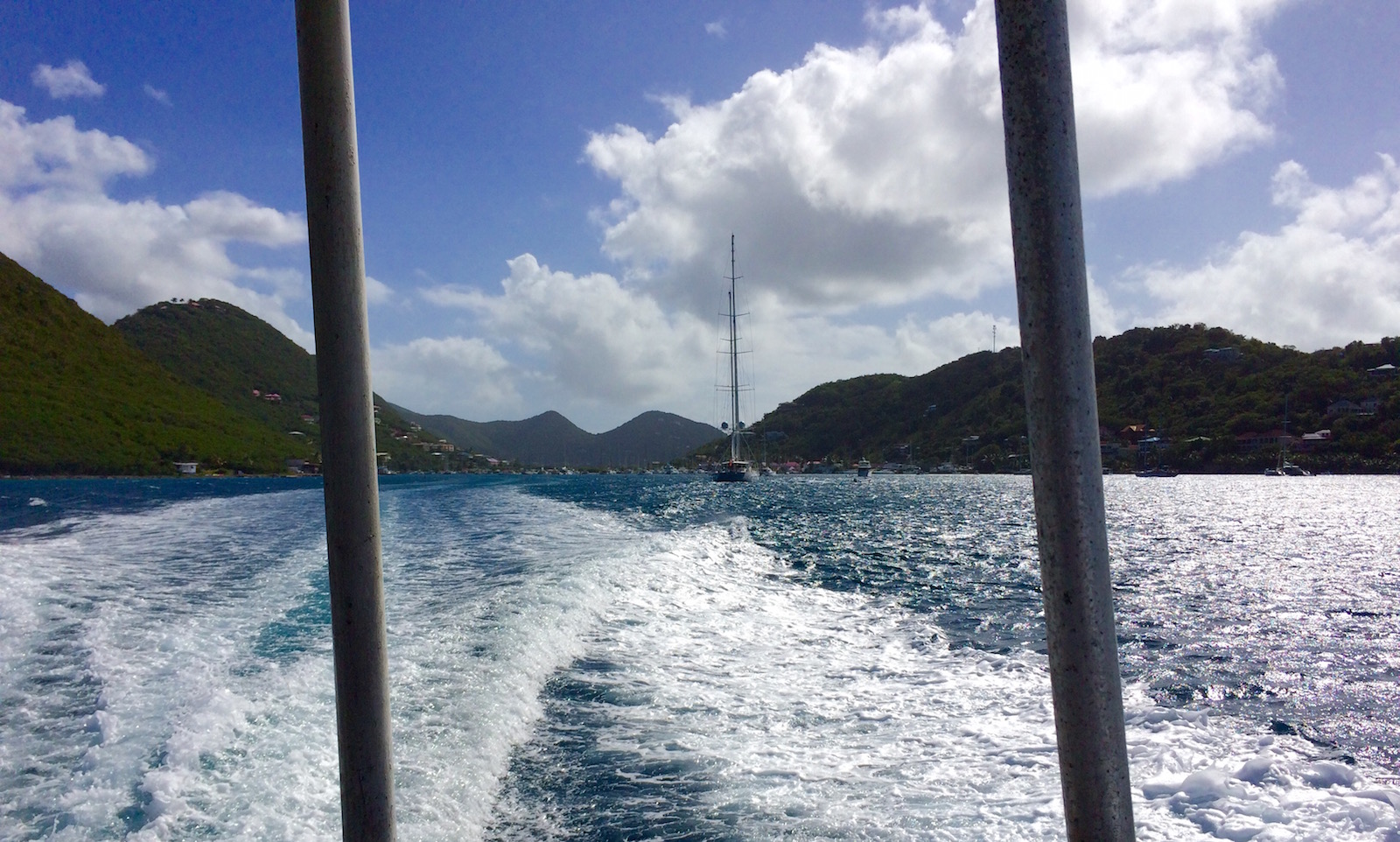 At Cruz Bay we had to wait for a motor boat to vacate the dock before the ferry could get in and then we could clear customs. We got the necessary stamp in our passport, was finger-printed and photographed and finally let loose.

We had a nice wander around town, sought out some breakfast, browsed the shops and whiled away the time waiting for the 3pm ferry back. By then we’d seen just about all there was to see in Cruz Bay… once, twice or more. 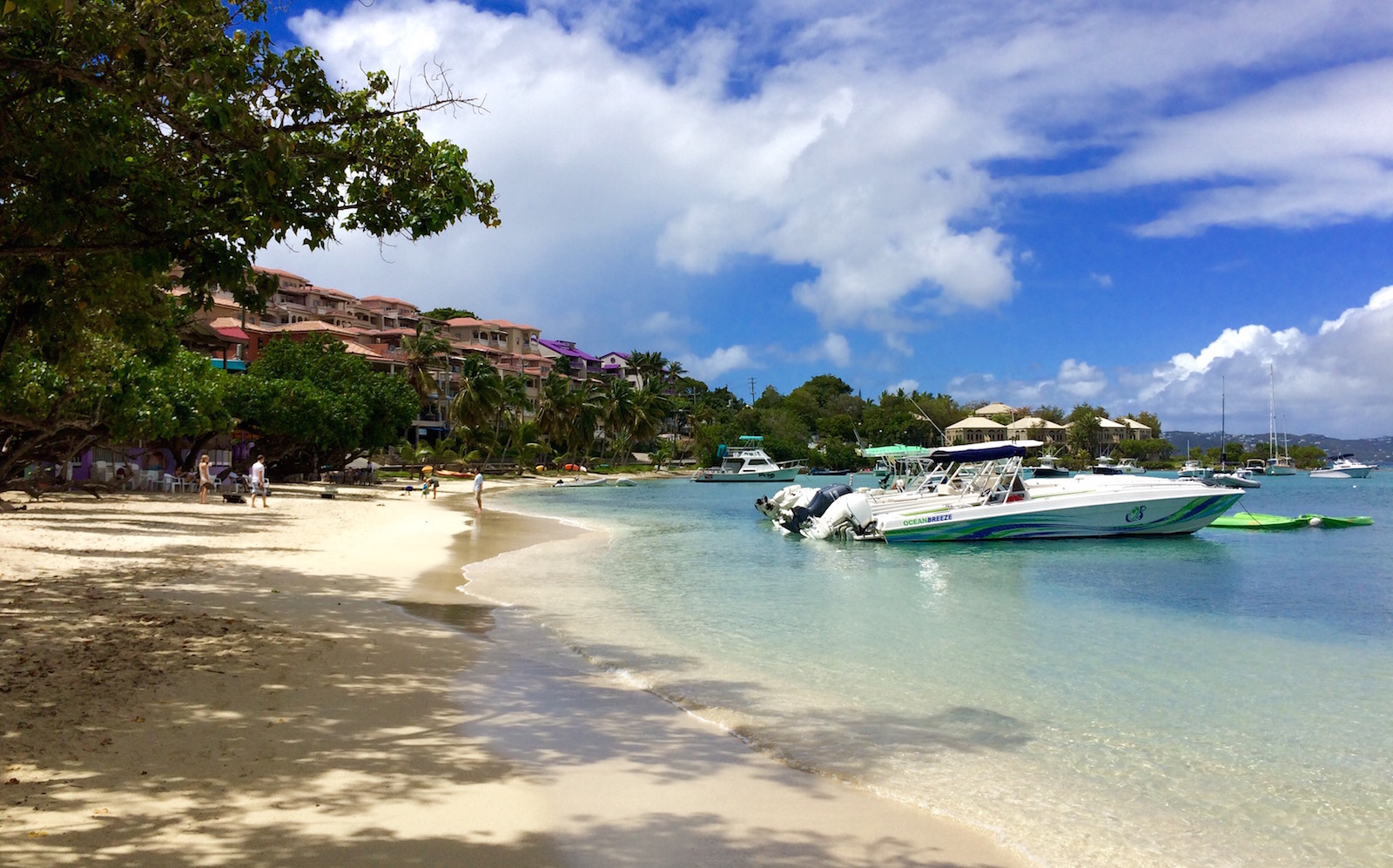 Back at Sopers Hole there wasn’t really much time to get to another bay before twilight so we wandered around to pay our mooring buoy fee at the marina and search out some dinner. Not much happening here, it’s really a bit of a hole, although the bar is ok.

Next morning we cleared out and headed to the USVI, this time St Thomas as the anchorage at Cruz bay was overcrowded and we weren’t in any rush to go back. It was a bit of a bumpy ride and no sooner had we dropped the anchor than a squall came bringing with it 35 knot wind and rain. At least we knew the anchor was set.

We headed out once again to get the US visa clearance sorted. We dinged down the bay to Frenchtown marina looking for a dingy dock. There wasn’t one. So we dinged back up the two miles against the wind and chop to the ‘Downtown dinghy dock’. It really put our electric motor and our balance to the test but we finally made it and headed back down the way we came to customs. It’s pretty industrial here with lots of concrete. 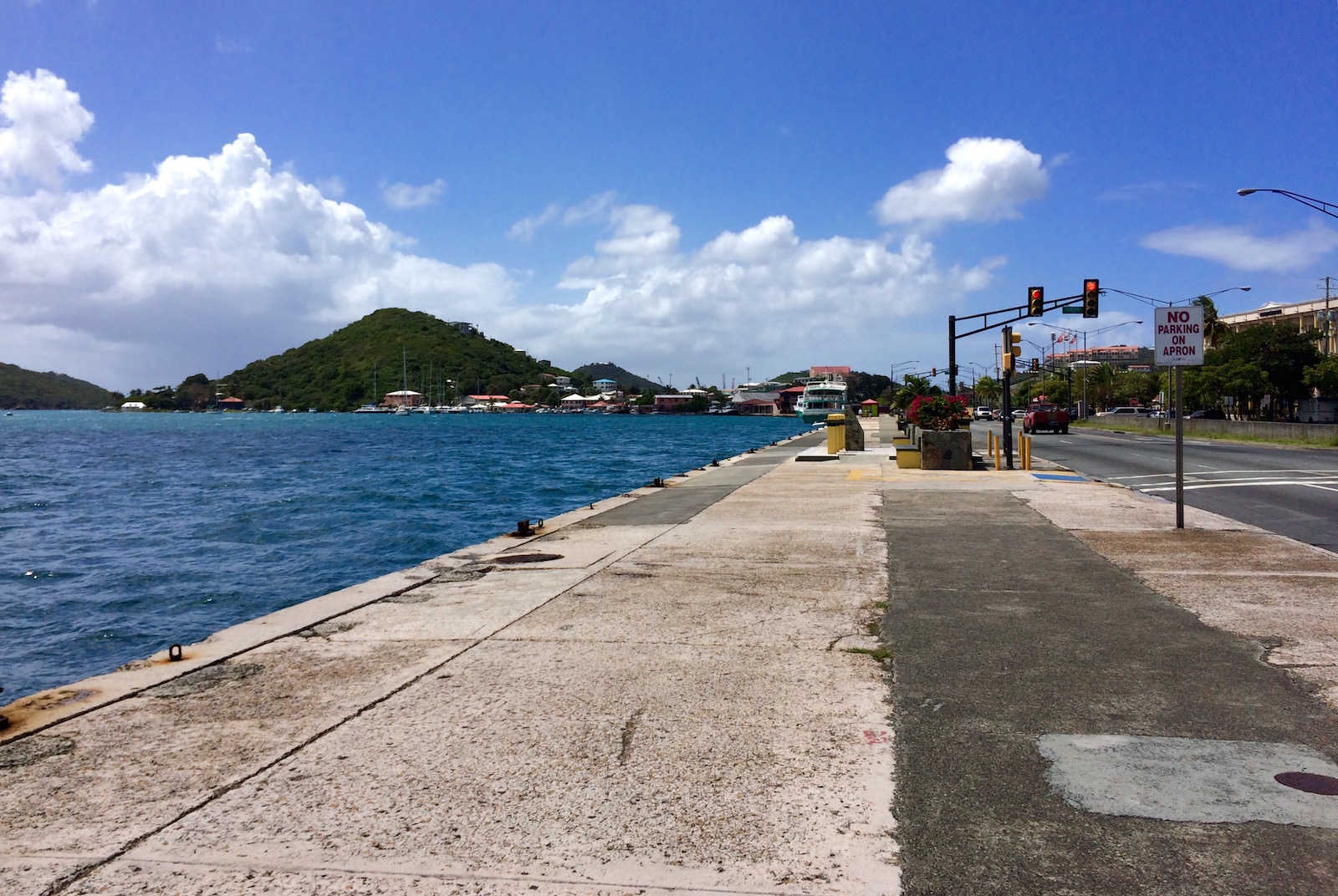 There was a bit of a queue at customs but after a bit more paper-filling, more finger-printing and photographs and we were officially cleared in – whoop!

After that we went for a wander and ended up at the other end of town where a cable car will take you to the top of the hill. We paid the whopping fee only to be told it closed at 4pm, 45 minutes later. That’s almost a dollar per minute, awesome! We made it to the top where the views were stunning and the beer was cold, but somehow it always feels better when you’ve made the climb yourself so I’d definitely do that next time. 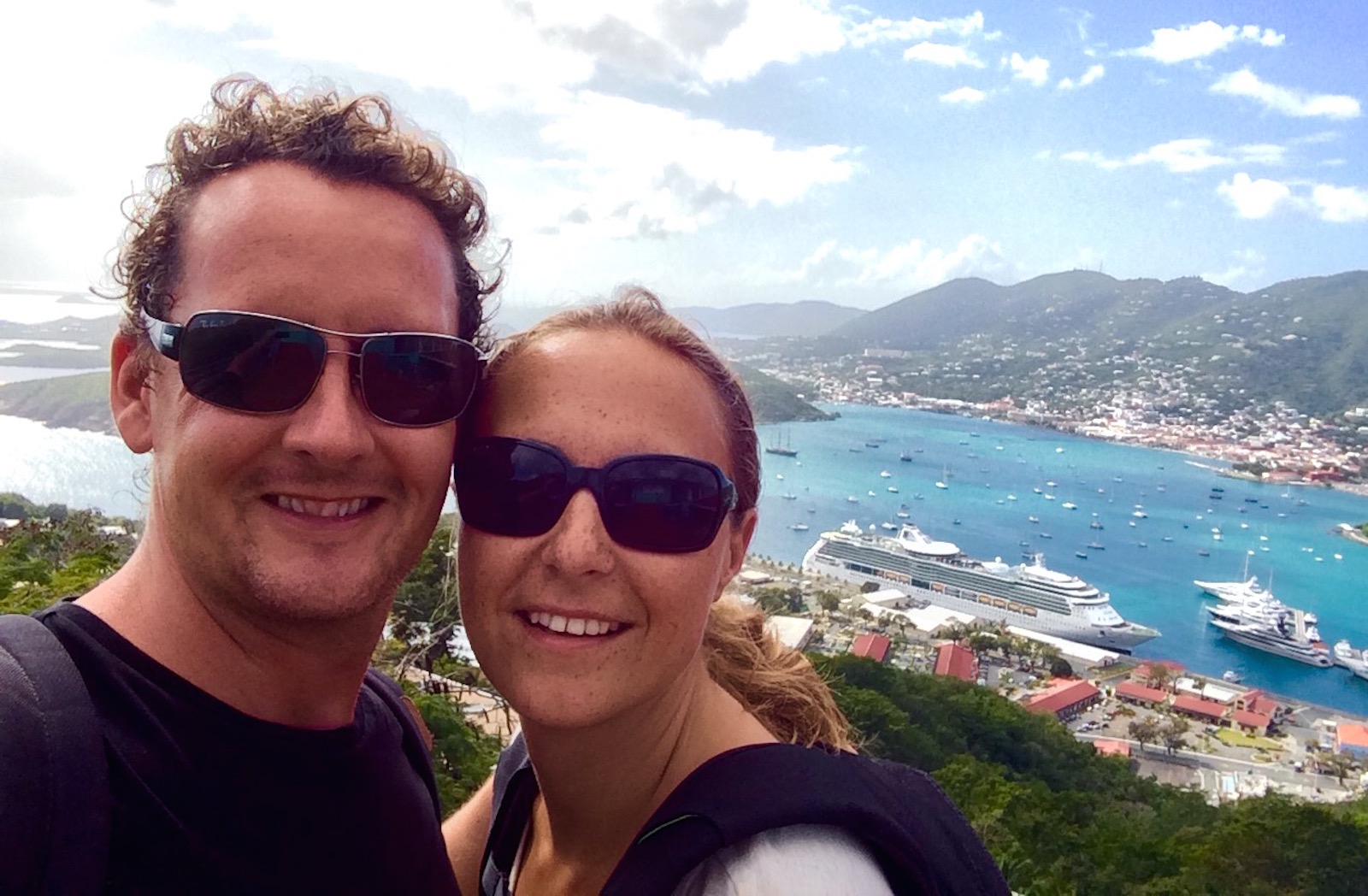 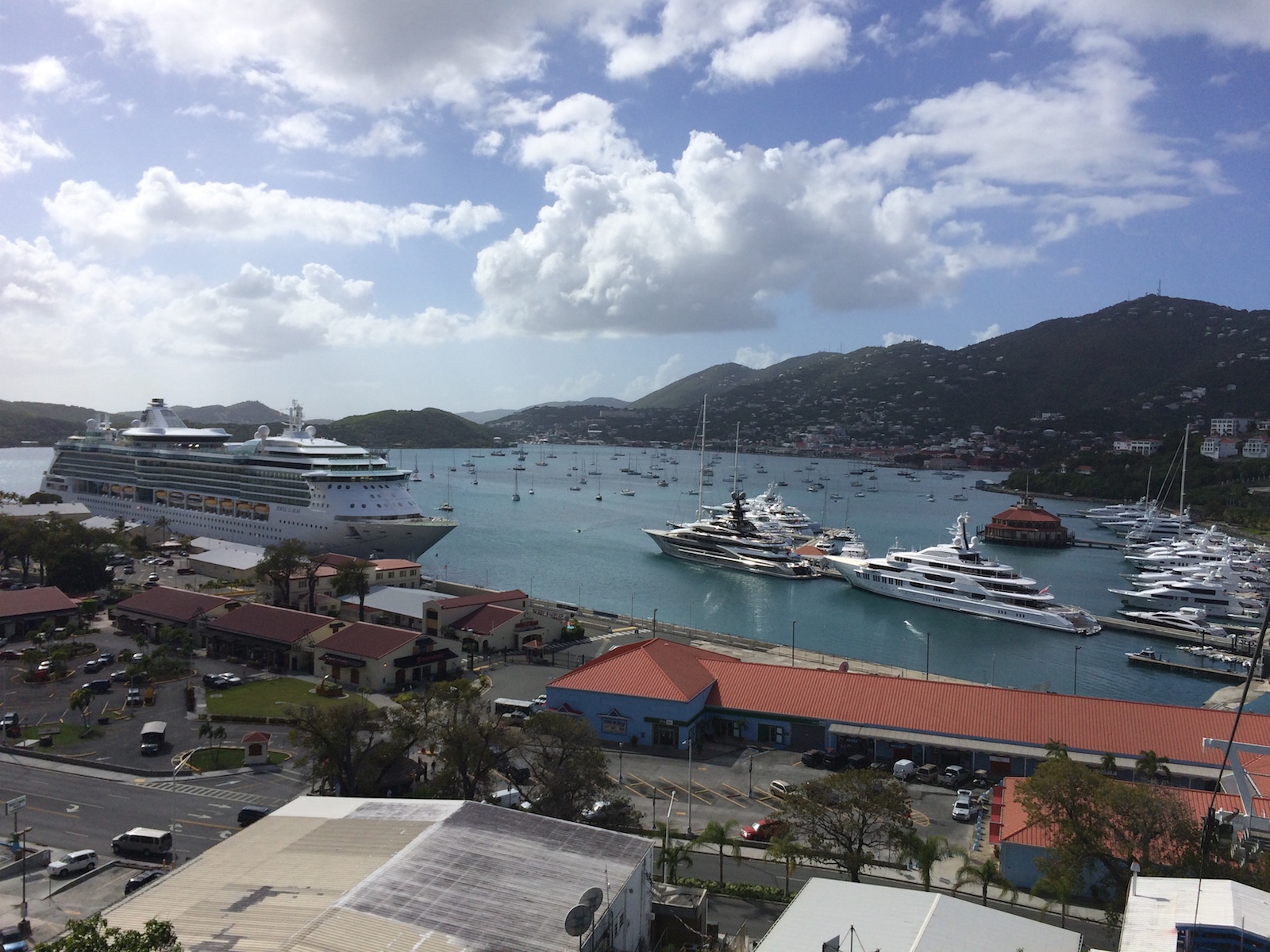 After that we popped ourselves down at the fat turtle bar to debrief and then back to the Green House bar for an all American dinner. My first ever Reuben roll was yummy but made me feel like a fat turtle! 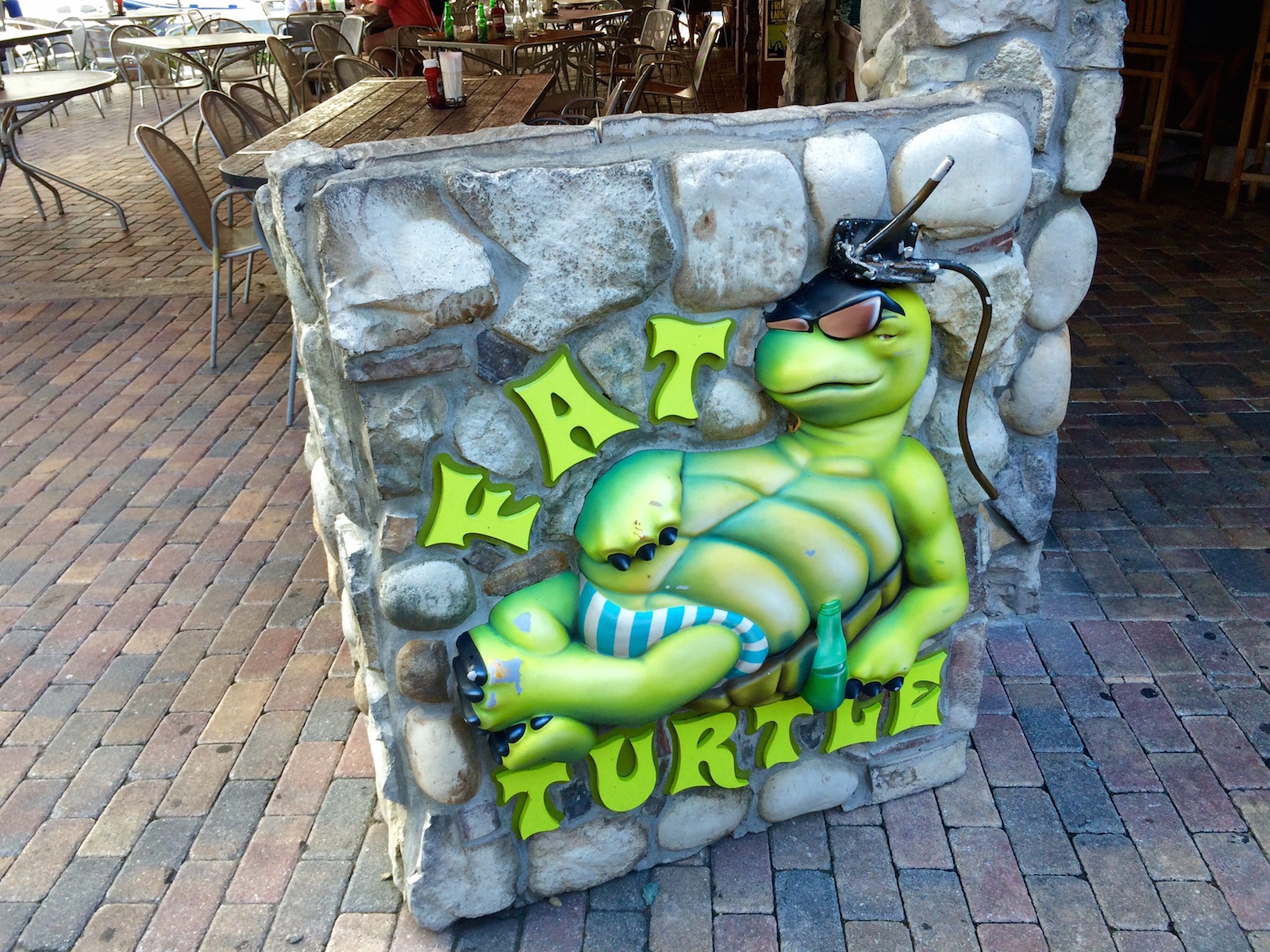 Next day we took a dinghy ride up to the dock at the IGY marina for a provisioning run. After we made it past all the cruise ships and mega yachts without a scratch we searched for a spot at the dock. It took three attempts but we managed to strong-arm our way in. This is the busiest dock we’ve been to. 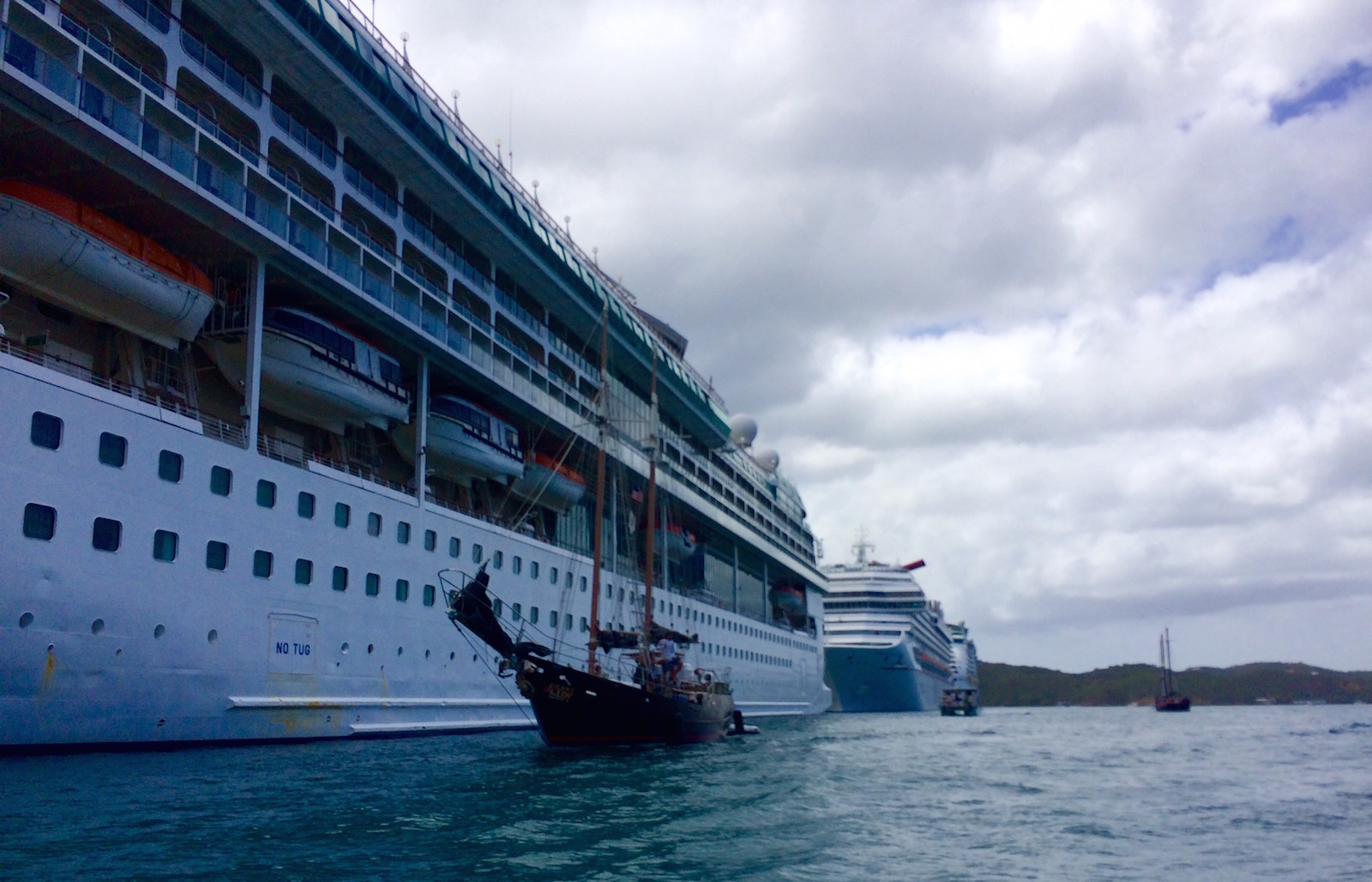 In good news, the supermarket is just around the corner so we loaded up and then headed back to the boat. As we were making our way back to the boat a helicopter followed us, not sure if our fingerprints hadn’t checked out or if they were just scared for us after our recent trips up and down the harbour. He took a good look at our Interlude though! 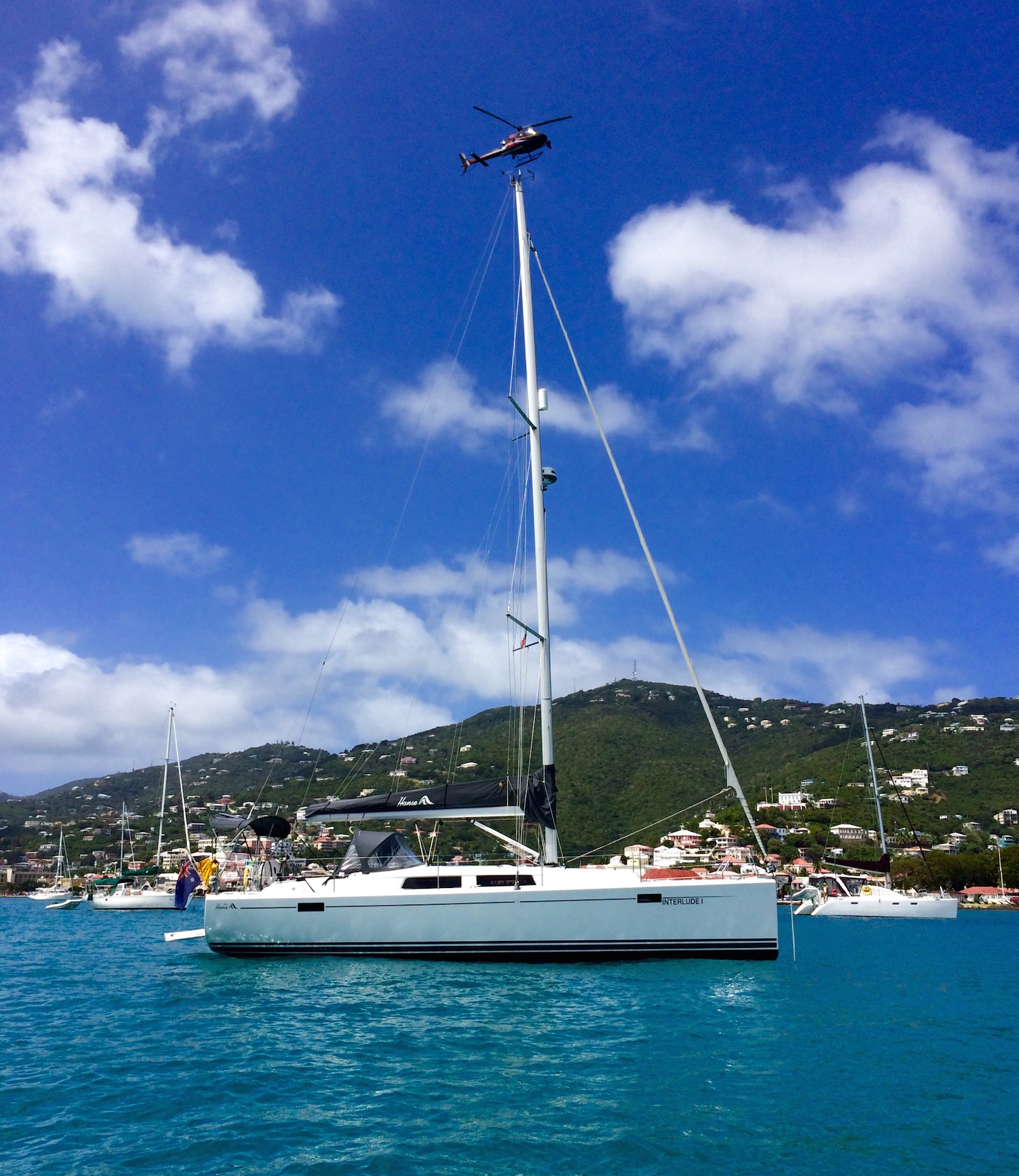 As the weather was squally and a bit mean looking we decided to do some planning for Puerto Rico. The guide we downloaded wasn’t great, not many chartlets, so we decided we would have to stump up for the hardcopy version. Back to the Frenchtown marina, this time by dinghy and bus, to pick it up. These things are draining our bank account fast but seem to be the quickest and most effective way to plan.

We found the book and celebrated with a quick beer at ‘The Pub’ and took in the sights. Frenchtown marina is actually quite lovely, with a great vibe and intimate feel. The one drawback is that it’s right next to the cargo ship dock, and like many of the reviews report, it’s a little dirty and noisy down this end. The town planning in this place is really quite bizarre.

After that it was time to return to the boat and get our Spanish Virgin Island trip nailed down.

One thought on “US Virgin Islands”